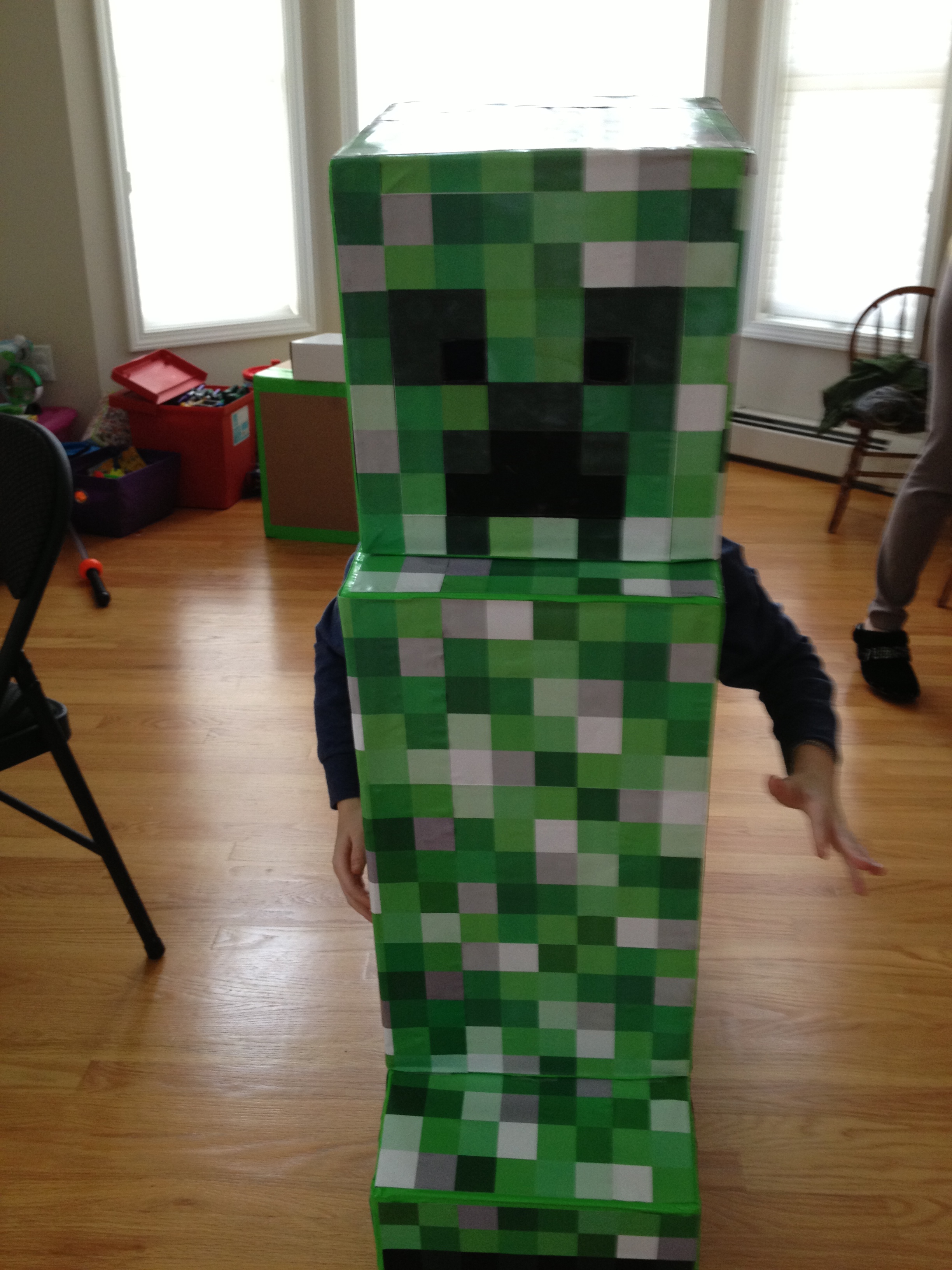 My son Jason is truly an expert at picking the most obscure characters around for Halloween. Sure, he’s had his fair share of  Thomas the Tank Engine type costumes but the last few years, my wife’s made his costumes. And that’s only because the characters he picks aren’t available to purchase.

Case in point: He picked Yoshi (from Super Mario Bros.) a few years ago. Yes, everyone knows Yoshi nowadays and there are plenty of costumes for him now. But at the time, he wasn’t that popular and no costume existed. She somehow miraculously sewed (by hand) a Yoshi costume for him. It was awesome and he still has it.

This year, he decided to be a Creeper. A what what? Yeah, exactly. That was my reaction too.

Jason’s addicted to this world-building video game called Minecraft. In it, there are these bad guys called Creepers. They have no arms and sort of shuffle up to you. When they get close enough to you… they explode. Neat!

Allie will always find a way to make our kids happy no matter what (Gotta love that about her), so she became super determined to make a Creeper costume. And when Allie puts her mind to something, she goes above and beyond the call of duty.

After realizing she’d have to use boxes for the costume, she went out and bought a few boxes then tried them on for size. She used one huge box for the body and a smaller one for the head. For the feet, she cute a medium sized box in half, though shoeboxes would work just as well.

To get the color scheme, she used good old-fashioned Microsoft Word. She created a large table and manually colored in every single square in different shades of green. Jason helped pick out the different colors. She created a few different templates and then printed out dozens of them on photo paper. She carefully cut a lot of the papers with a paper cutter and clued them all around the boxes.

I cut a large hole in the top of the main box for Jason’s head and then sized up the arms to give him room to put his arms out. That was the only tough part, since Creepers don’t have arms. But if we went true-to-form, a Creeper costume just wouldn’t be able to hold a Trick-or-Treat bag, now, would it?

Once everything was sized up, she glued the feet on and then figured out a great way to keep the head attached, while still making it removable: velcro!

I think it came out fantastic! Jason wore it to a Halloween Party at his school over the weekend and surprisingly a TON of kids came up to him saying how much they loved his Creeper costume. Then they lifted the head to see who was in there!

Jason loved the costume and loved how everyone knew who it was. But, just like me, he told me, “Everyone keeps coming up to me to talk about my costume. It’s kind of annoying.” We just don’t seem to like attention it seems.

Hopefully it won’t be raining when it’s time to go Trick-or-Treating in the neighborhood, so he can wear it around. Though I have to tell you, it’s not only hot in that costume, it’s really hard to see. The eye slits are real small, limiting your vision. And the black coverings (made out of pantyhose!) give everything a sort of tinted view. We’ll see how long the head lasts.

As for Ryan, thankfully, he saw a cool Ice Ninja costume at Target for like $15 so that was an instant win for us!

Hope you all have a safe and fun candy hunt!