Allie has written for Mommy’s Busy Go Ask Daddy before when she made the cutest and most deliciousest SpongeBob Krabby Patty Cupcakes. She did such a great job, that I knew I’d have to have her on here again. Besides baking the bestest cakes in the universe, she’s also insanely amazing at putting together Halloween costumes. Yeah, for someone with a science background, she’s really pretty darn artistic.

Now when it comes to Halloween, Jason’s always the tough one. He never knows what he wants to dress up as and it’s almost always some insanely crazy obscure video game or Pokemon type character. That means no costume exists for it, so Allie’s stuck making it. And with just her trusty glue gun, lots of cloth and a killer imagination, she always comes through! A few years ago she made the most adorable Yoshi costume for him. And this year, well, I think she topped it. I’ll let her take over now.

Last week, my 10-year-old son, Jason,  finally told me what he wanted to be for Halloween (even though I have been asking him since August). This is what he asked for… a piranha plant in a pipe from the Super Mario Bros games. 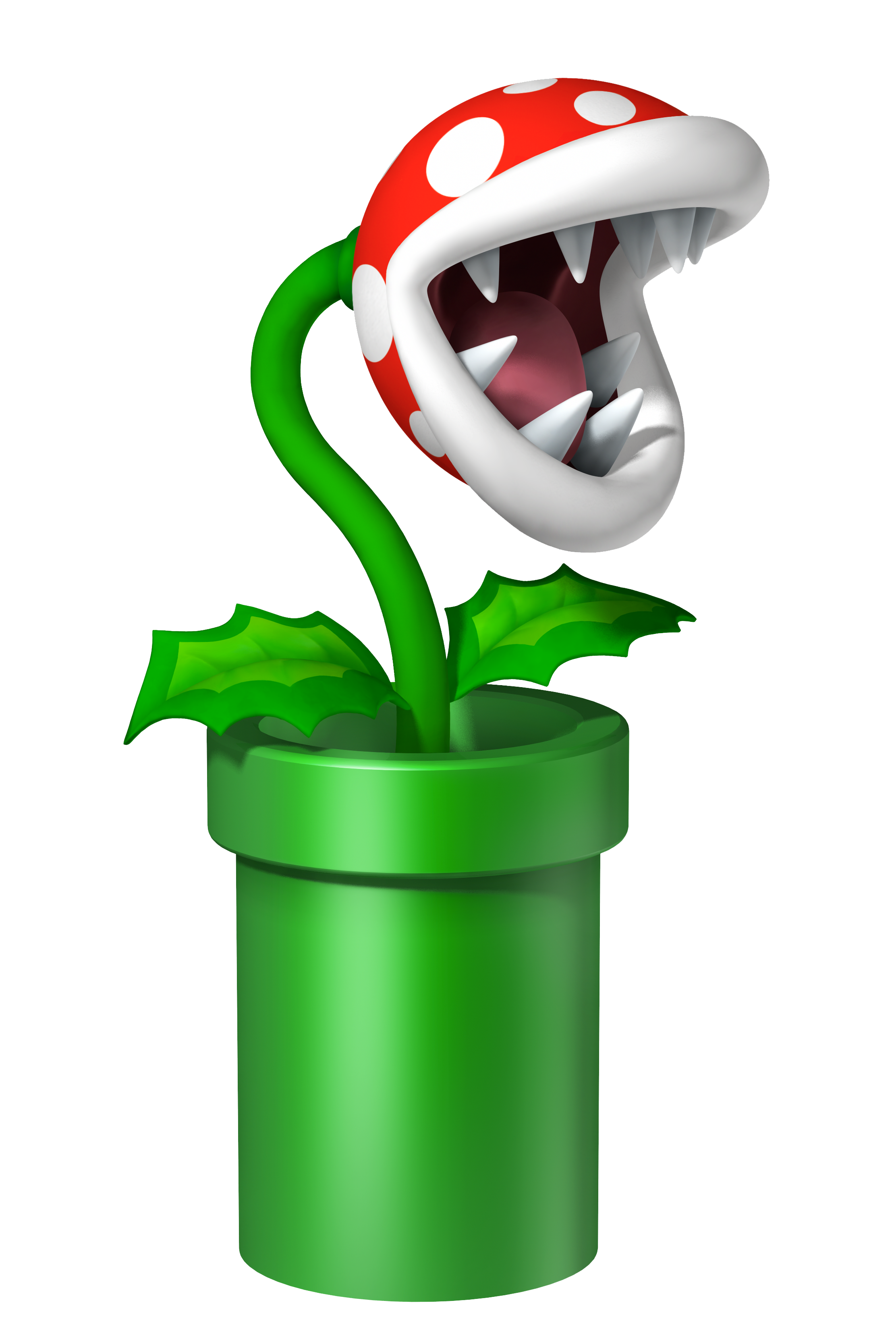 Off to JoAnn’s Craft Store I went. When I got there, I was pleased to find that felt was on sale for $2.99 a yard (that is really cheap)! I got 3 yards of green, 1/2 yard of red and 1 yard of white felt. It came out to $17 total. I thought I got away very cheap for a homemade costume! I already had a glue gun,Velcro and polyester stuffing at home from previous projects. (Don’t ask.) I use a glue gun because I think it is faster than sewing and also, I don’t know how to sew well.

When I got home, I went online and looked up other people’s piranha plant costumes. As Issac Newton once said, “If I have seen further than others, it is by standing upon the shoulders of giants.” I needed to see how others did it before I could make mine. Right away, I saw a costume with suspenders, which I thought was a brilliant way to hold up the bottom part of the costume.

In about an hour, I was able to get the pipe and leaves (bottom part of costume) done.

Here is how I did it:

The Pipe and Leaves Body

I wrapped the material around Jason’s (the costume requester) waist and left a little room to give the appearance that he is coming from inside the pipe. I then folded the top piece about 8 inches to create the top lip. As I was gluing the top piece, I also stuffed it with polyester stuffing. 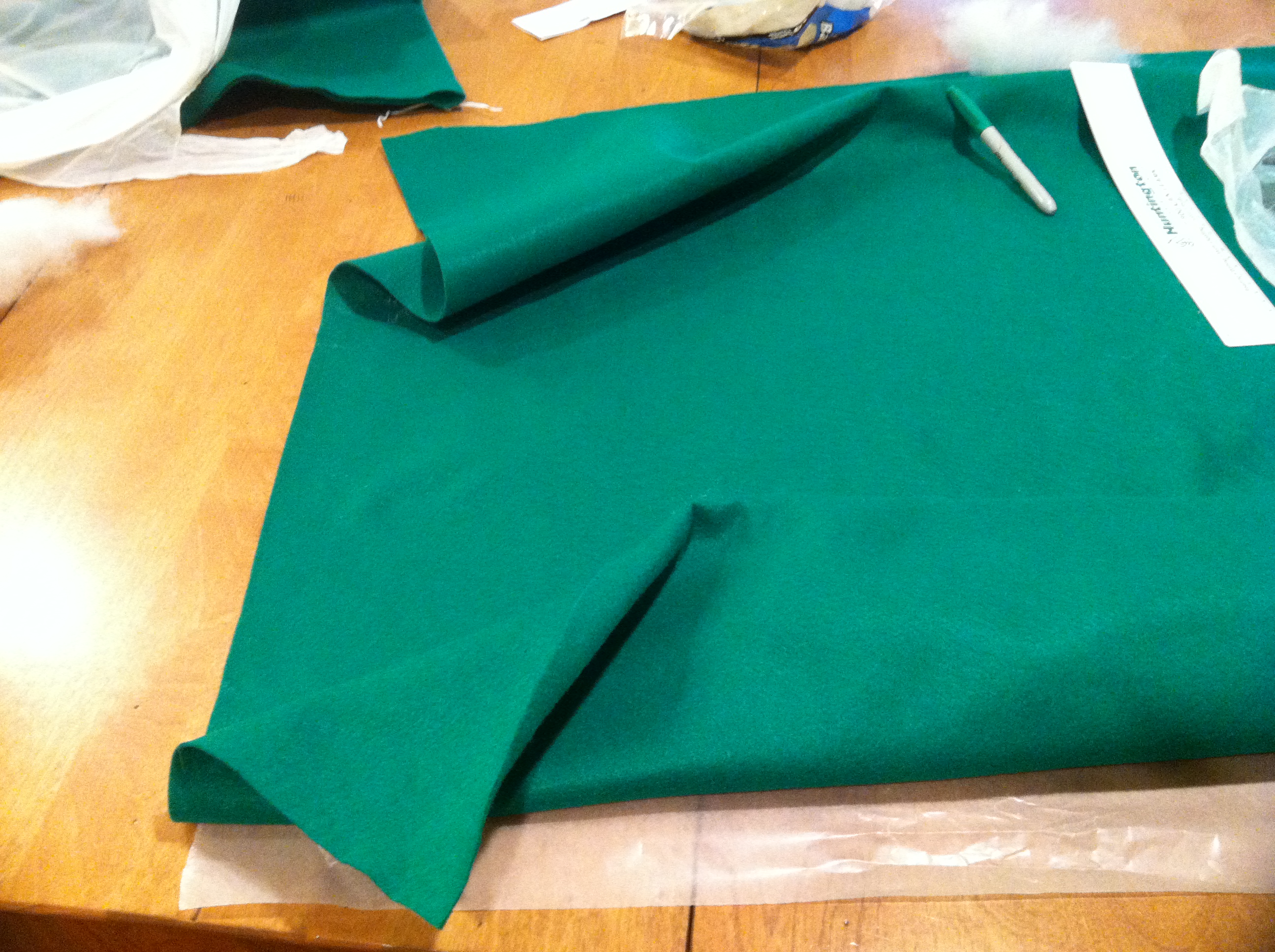 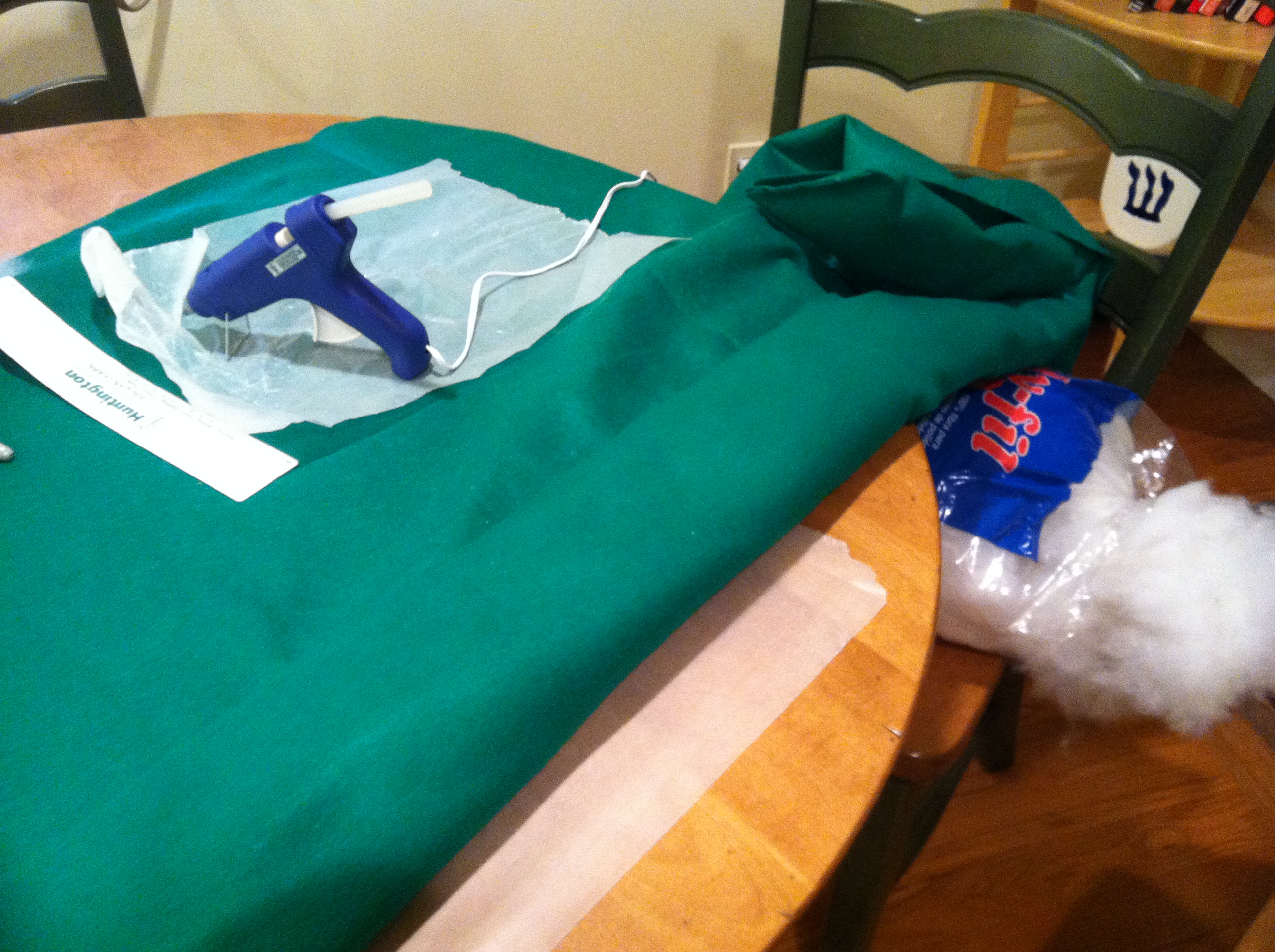 Once that was finished, I cut out two strips of green felt as the suspenders, measuring them  against Jason’s body. I glued both strips onto the back of this pipe and used Velcro to connect the front part.

For the leaves, I simply drew freehand leaf shapes. I made a thick band on the bottom of the leaf so it would wrap around his wrists, glued another layer of leaf, added Velcro and I was done. 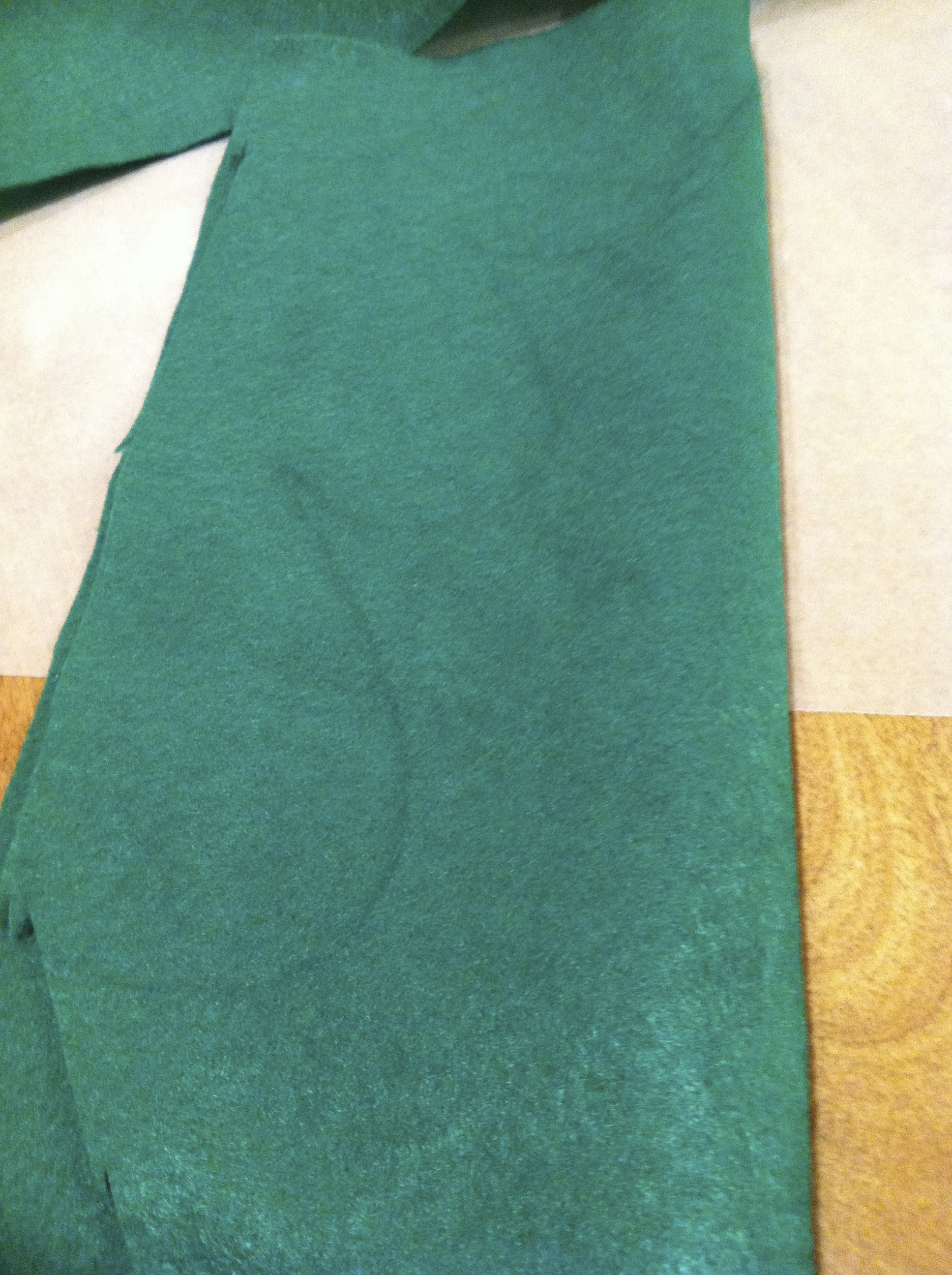 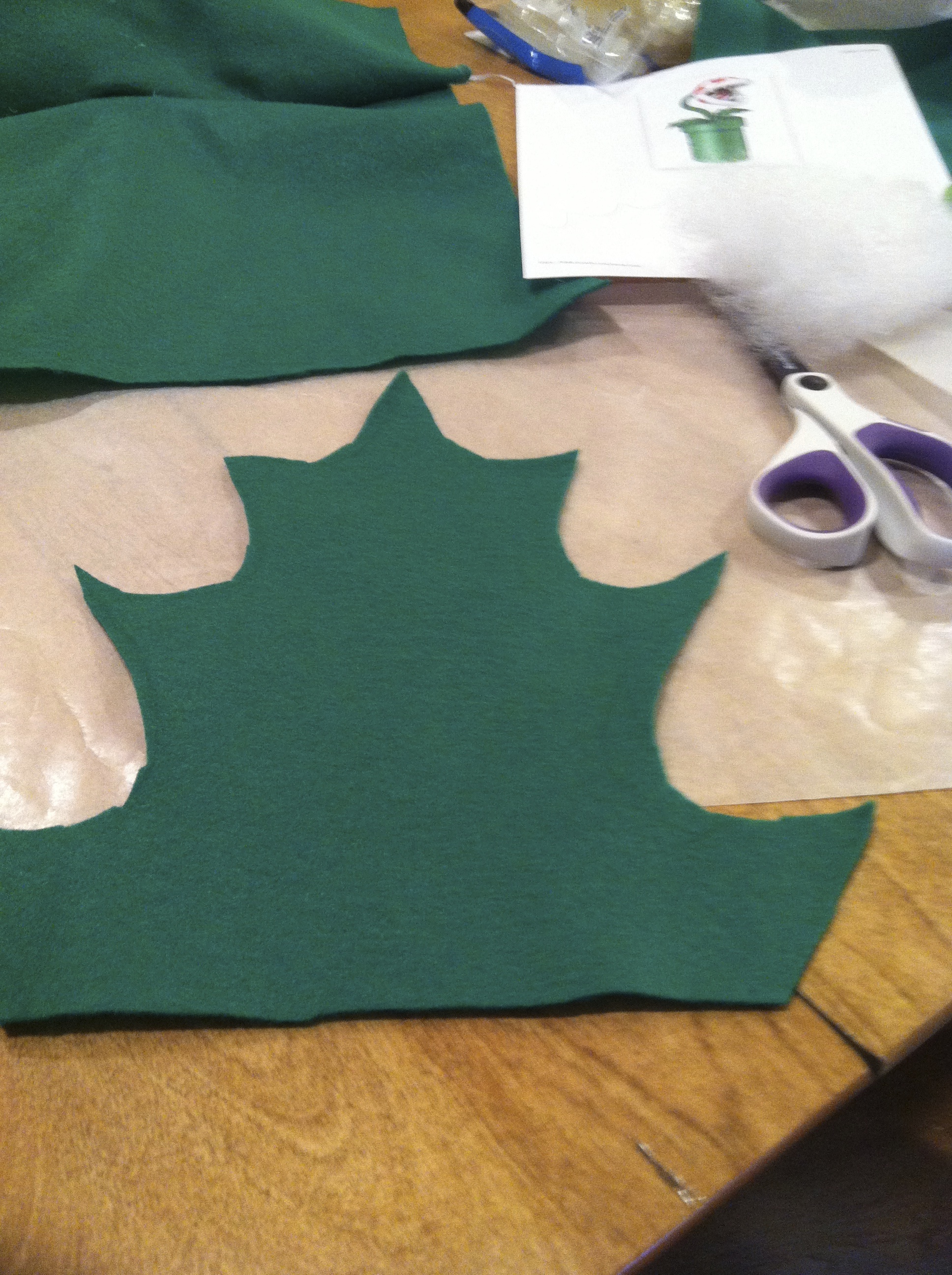 Here is the end product for Steps 1-3: 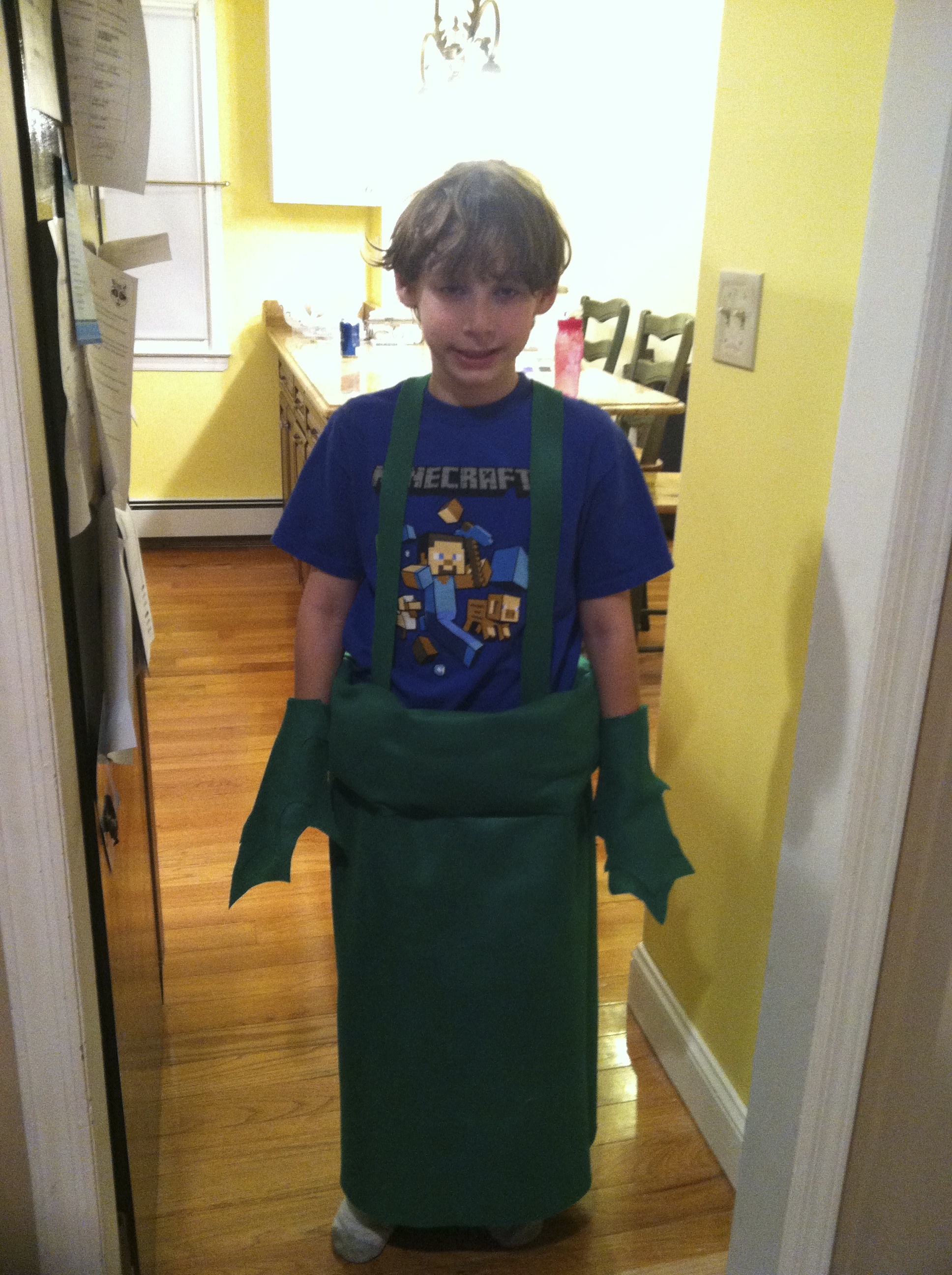 Here comes the hard part. I had no idea how to make the head!

I figured I would make it like a football helmet, meaning there will be a top part and a hinge for the bottom part. I studied photographs and stuffed animals to see how to make the curved part of the head. To secure the head, I would glue in an old hat. [EDITOR’S NOTE: Yeah, without my knowledge, Allie used one of my many baseball caps. See the sacrifices I make for my children? – Andrew]

The top part of the head consisted of three sections that I stuffed and glued together. 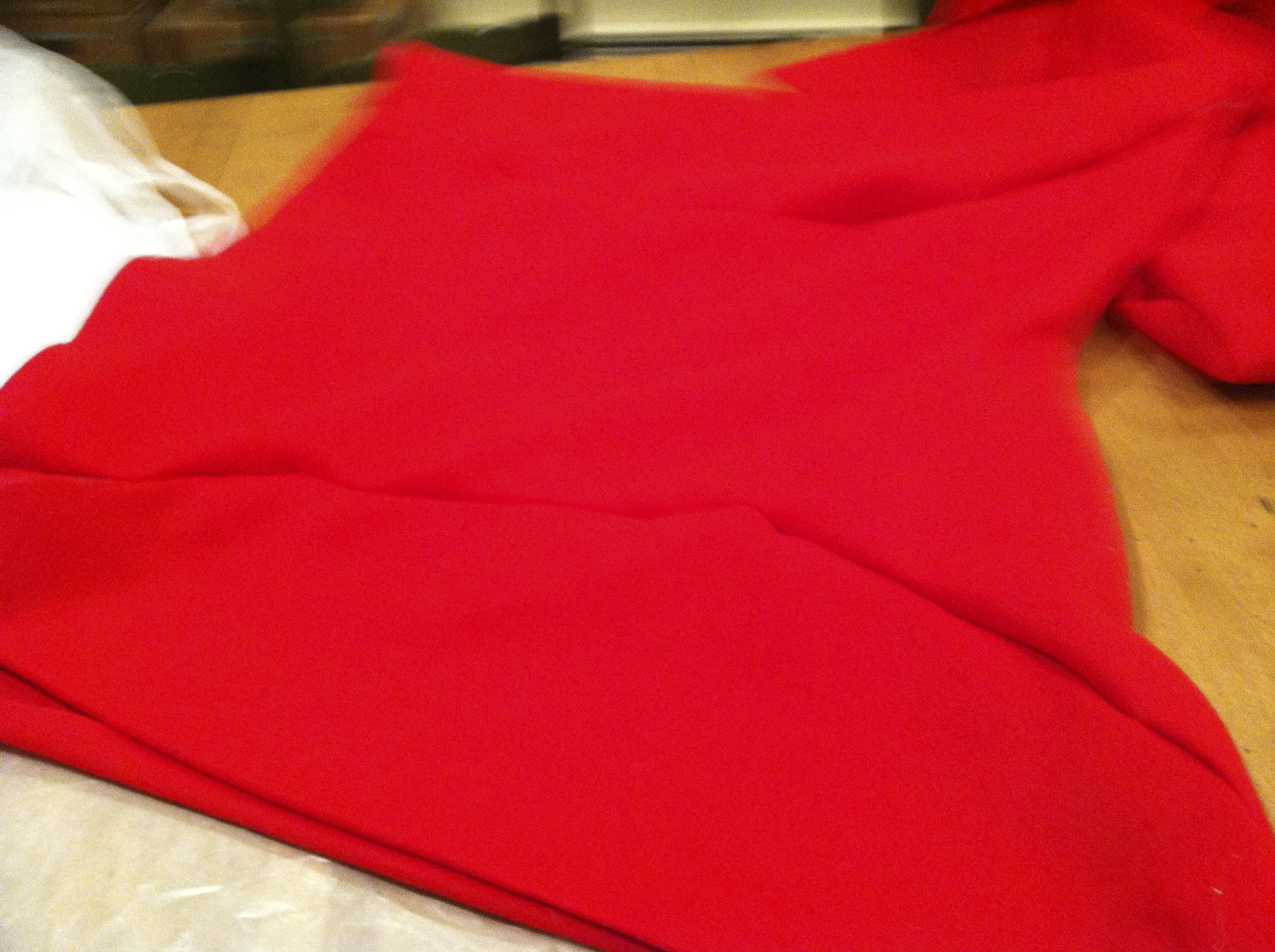 This was the top part and then I made a duplicate for the underside and then stuffed it. This is still for the top part of the helmet, as I didn’t do the hinge part yet. It ended up sooooo heavy and big that I actually trimmed the sides after it was glued, took out some stuffing and glued the sides back together.

Now it’s time to add the hat. This was pretty easy. I figured out where the middle part of this section was. I cut out a hole and glued in the hat. And yeah, I took out even more stuffing to make it lighter, again. 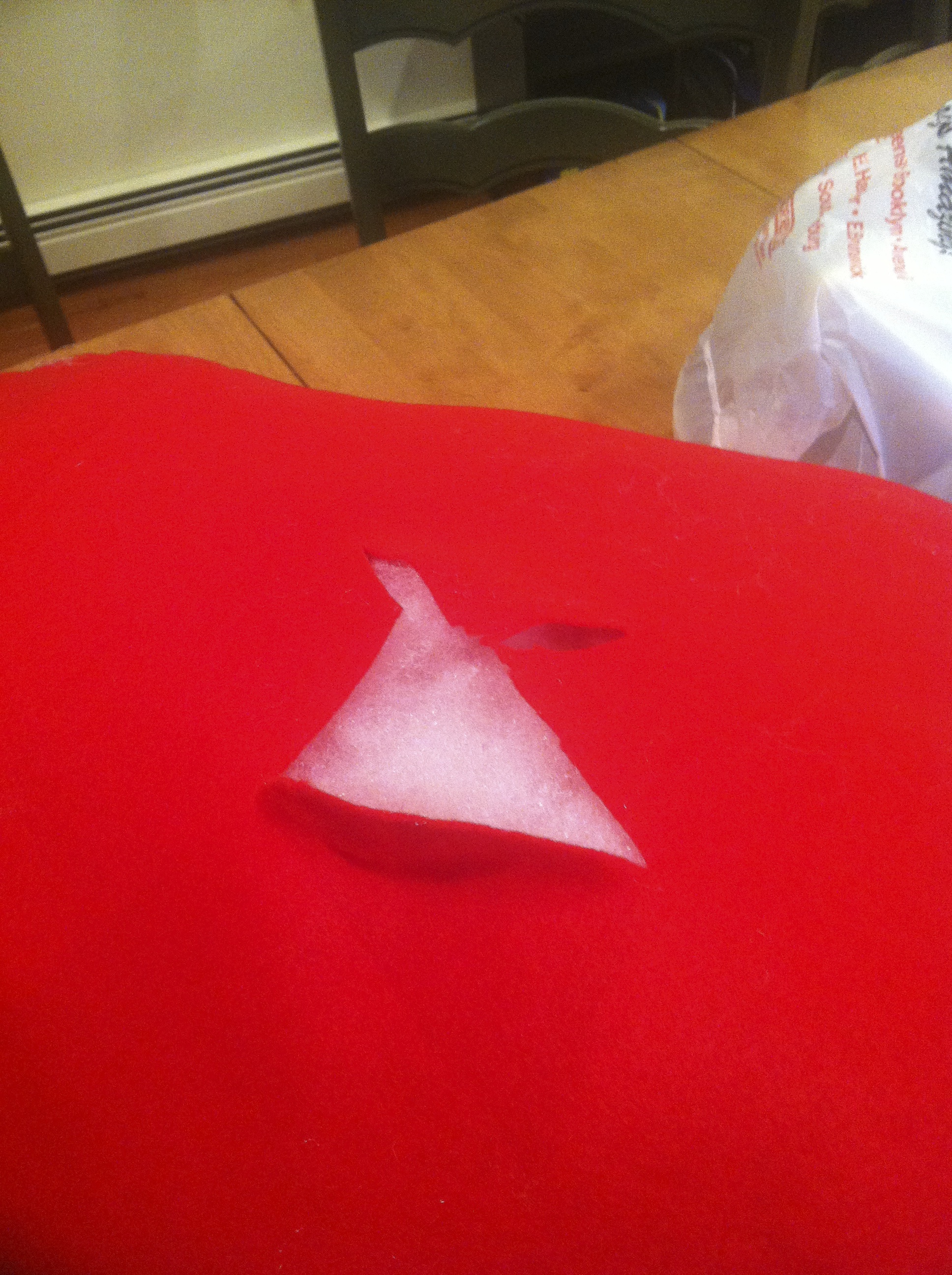 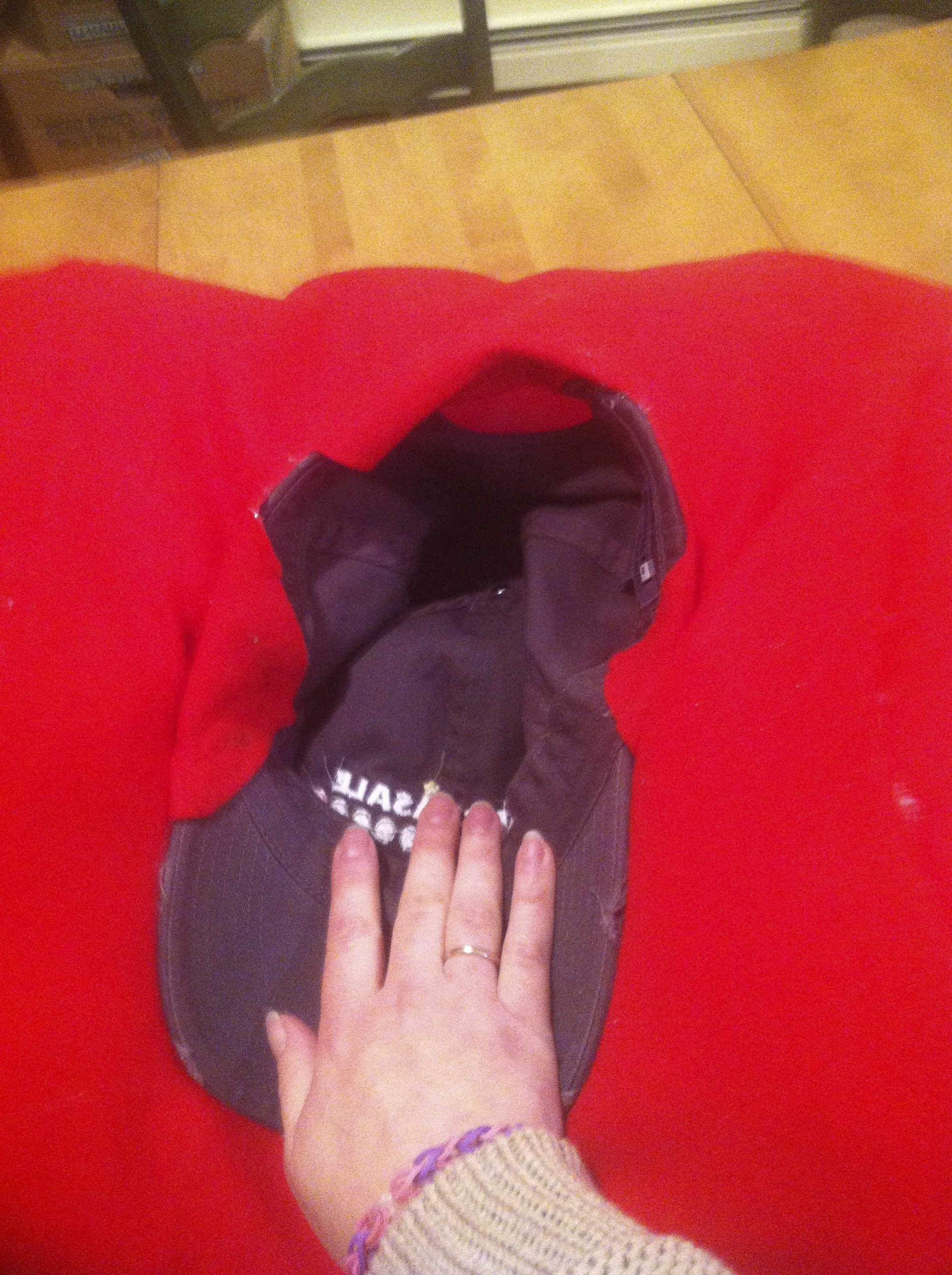 Now came time for the hinge (bottom part). I cut out a curved portion of material to match the length of the top part. This was more tubular and I just glued and stuffed it. 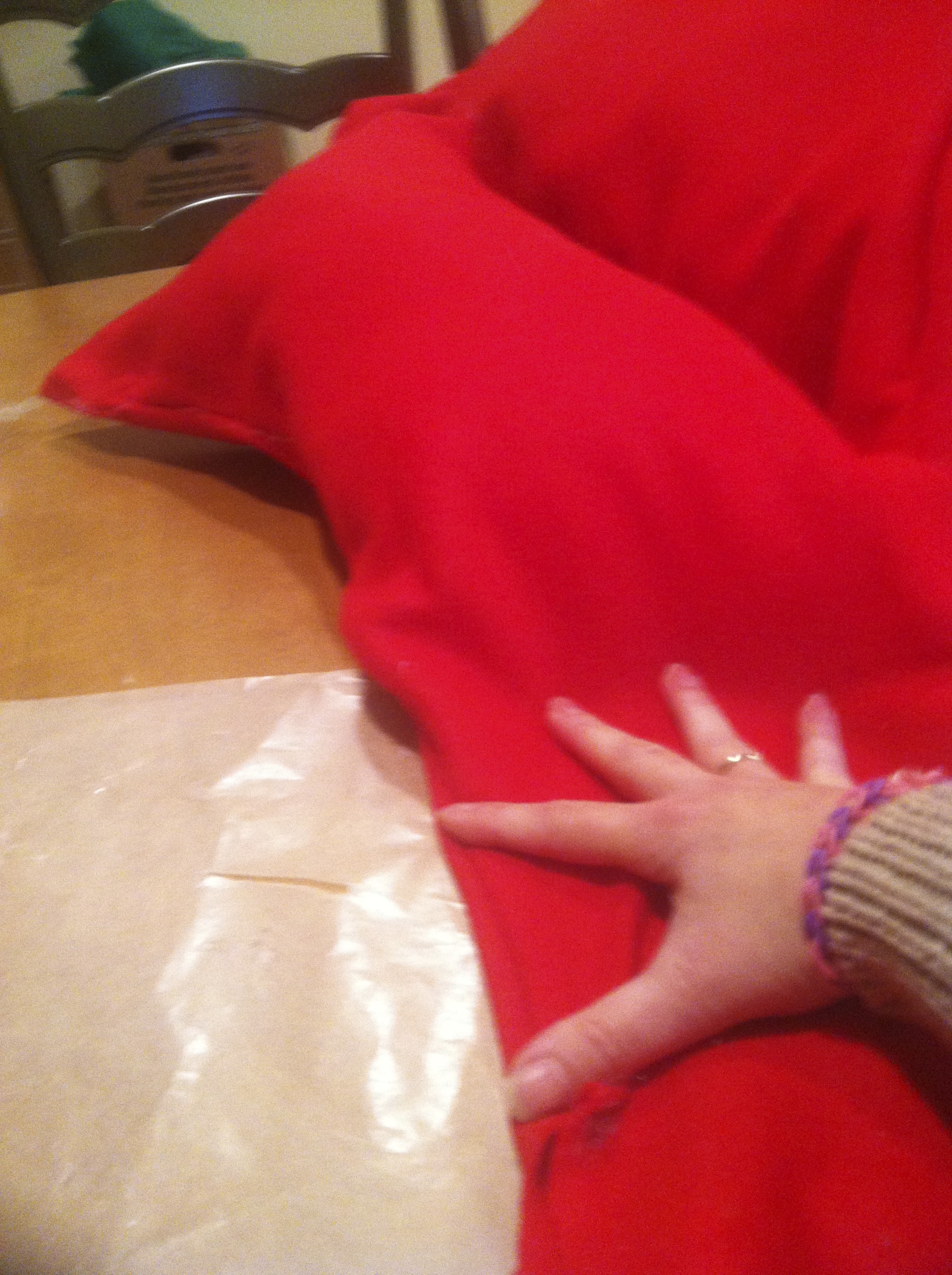 Here is the finished product for Steps 4-6: 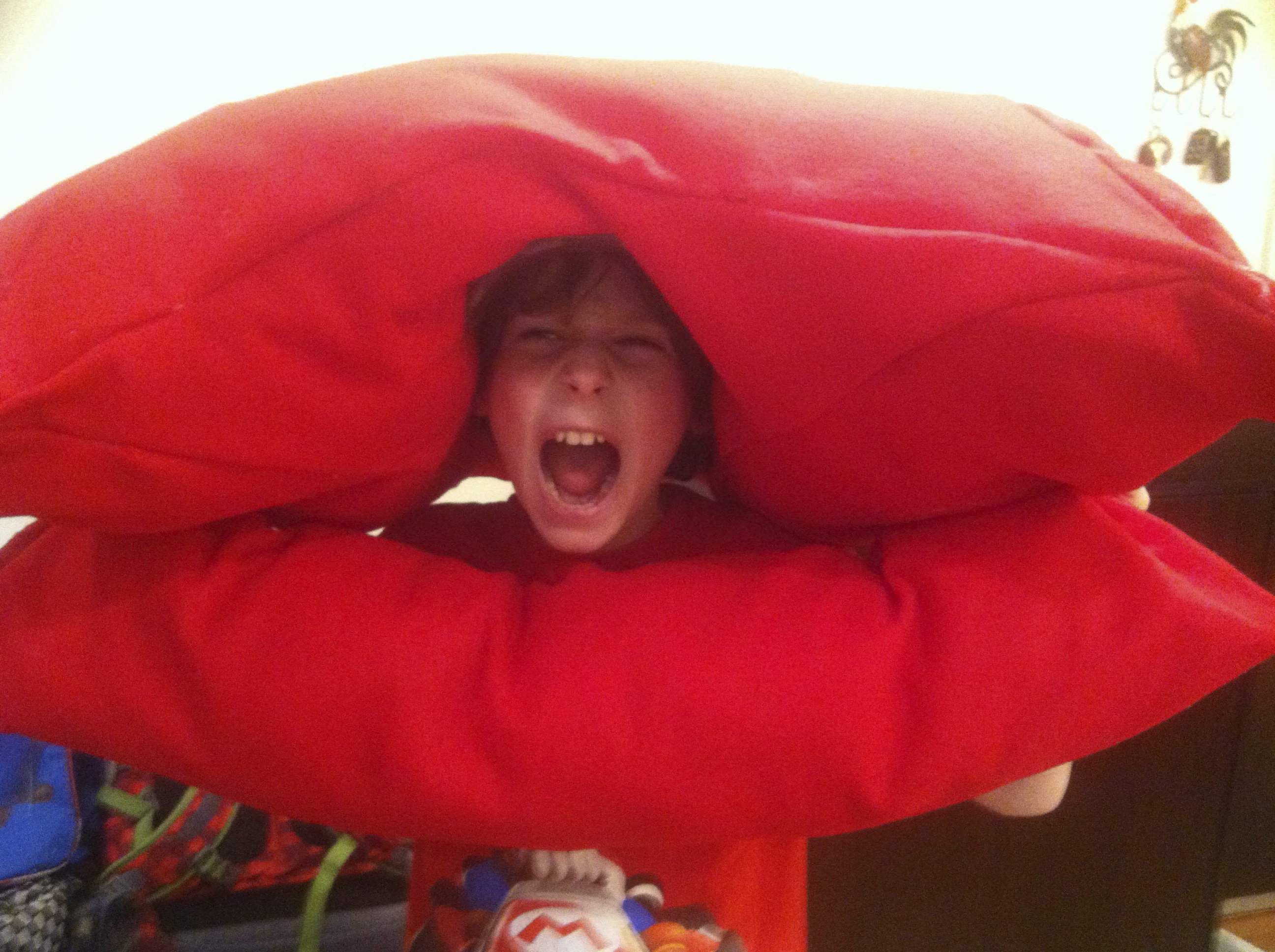 In the above photo, I didn’t glue the hinge to the top part yet. Jason is actually holding them together. I hope he is not screaming because it was so heavy! He will have strong neck muscles from wearing this costume. 🙂

To make the white lips, I cut on a long piece of white felt and folded it over, stuffed and glued it. I measured it against the red head to get the correct length. 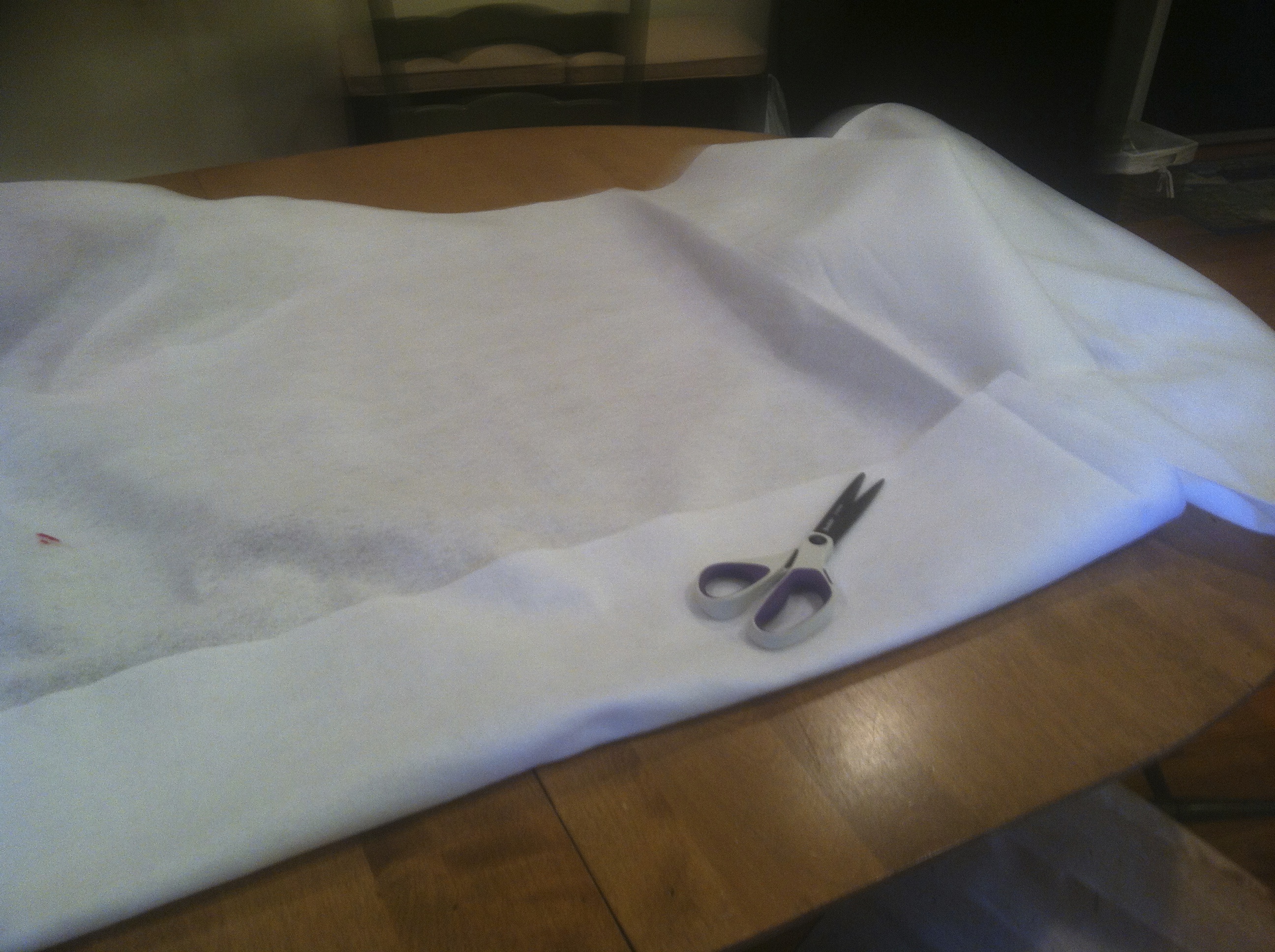 Here is a picture of it being stuffed: 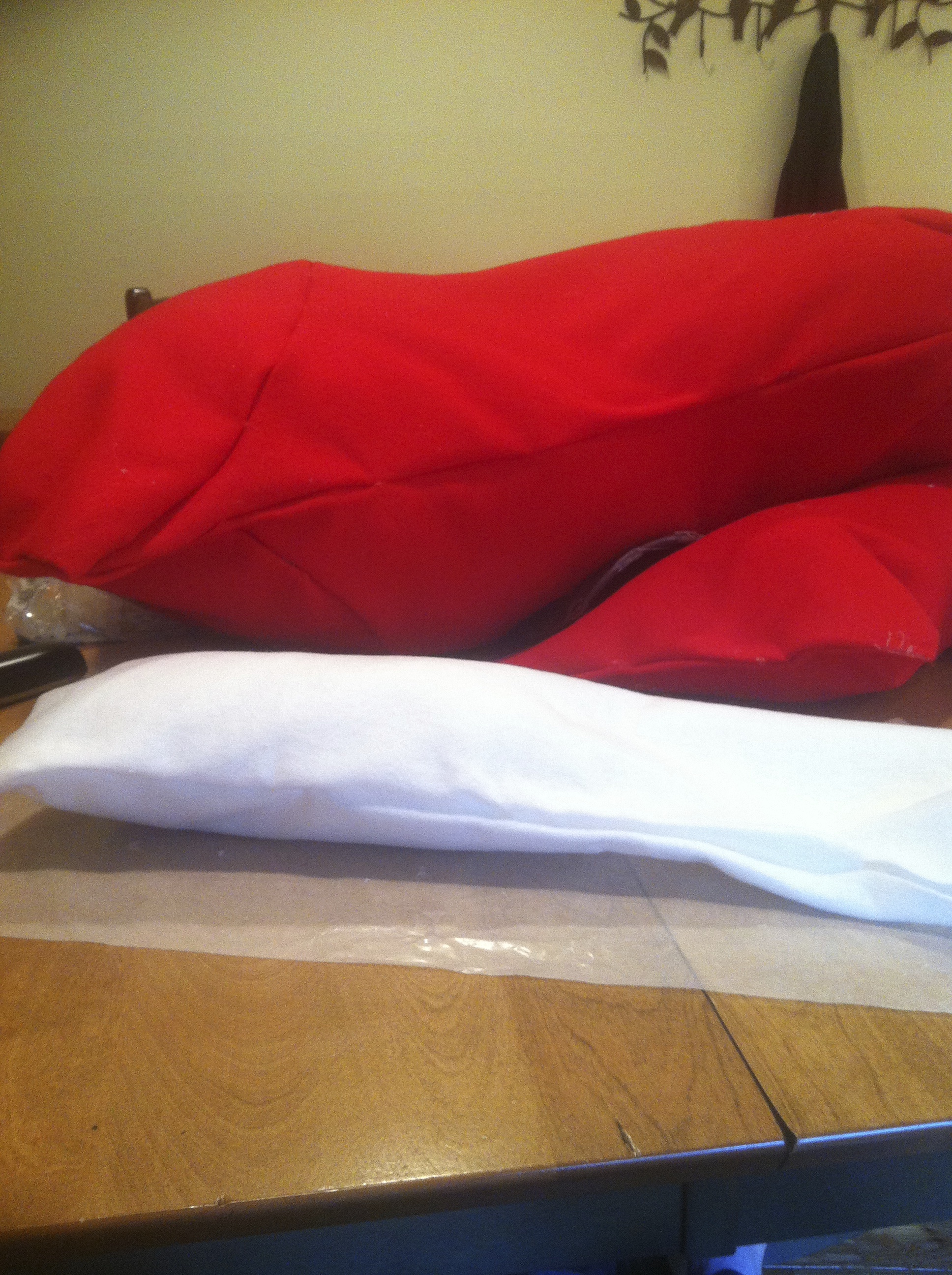 After the lips were done, I just glued them seam side down on the red parts.

To make the spots, I just  drew circles on the white felt and cut them out. Next, I glued them on with the glue gun and was done. To make the teeth, I drew triangles on a folded sheet of white felt, cut them out and glued two out of the three sides. 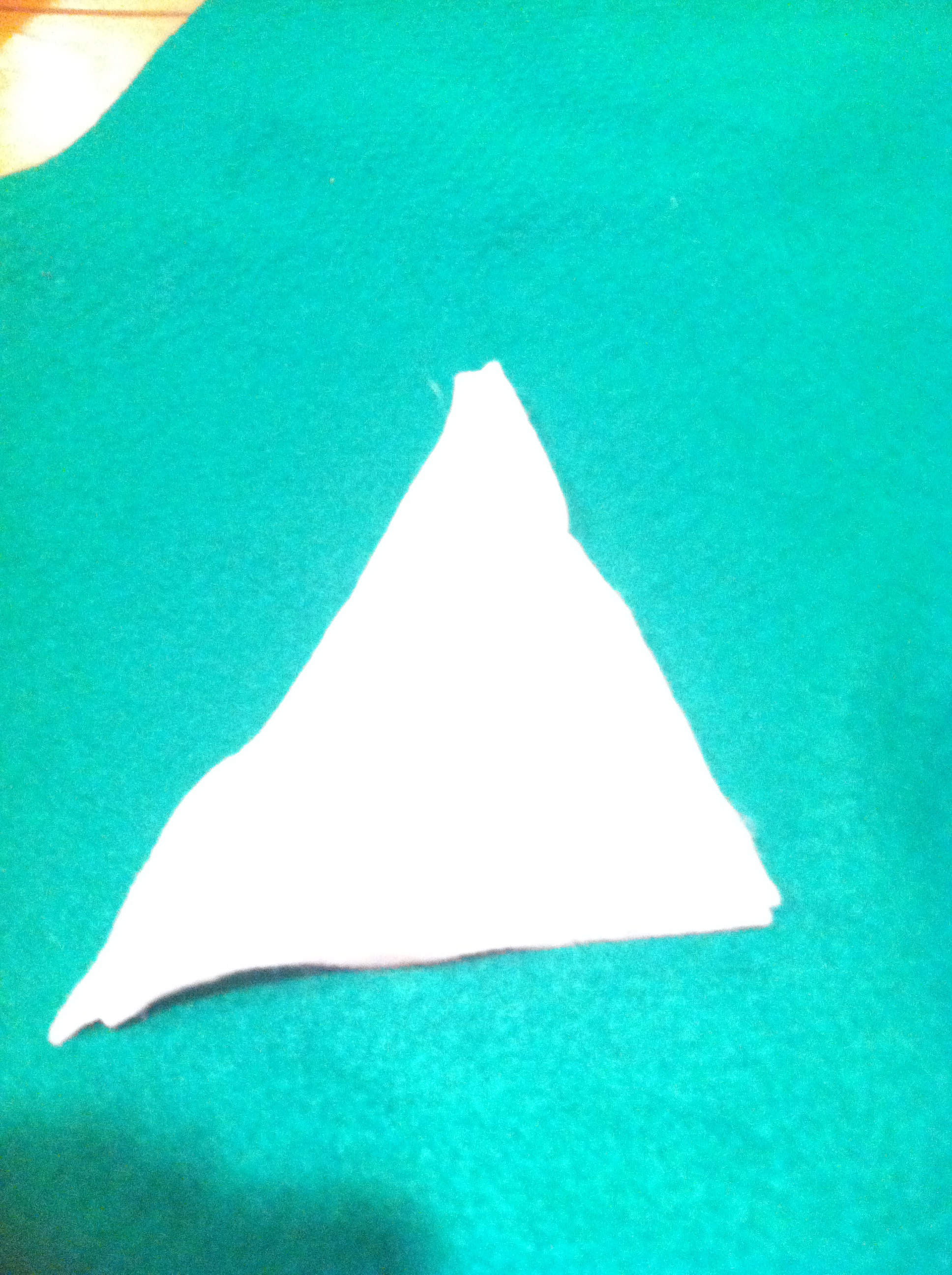 Once the glue was dried, I pulled the triangle inside out (so you won’t see the seams), stuffed and glued them down. 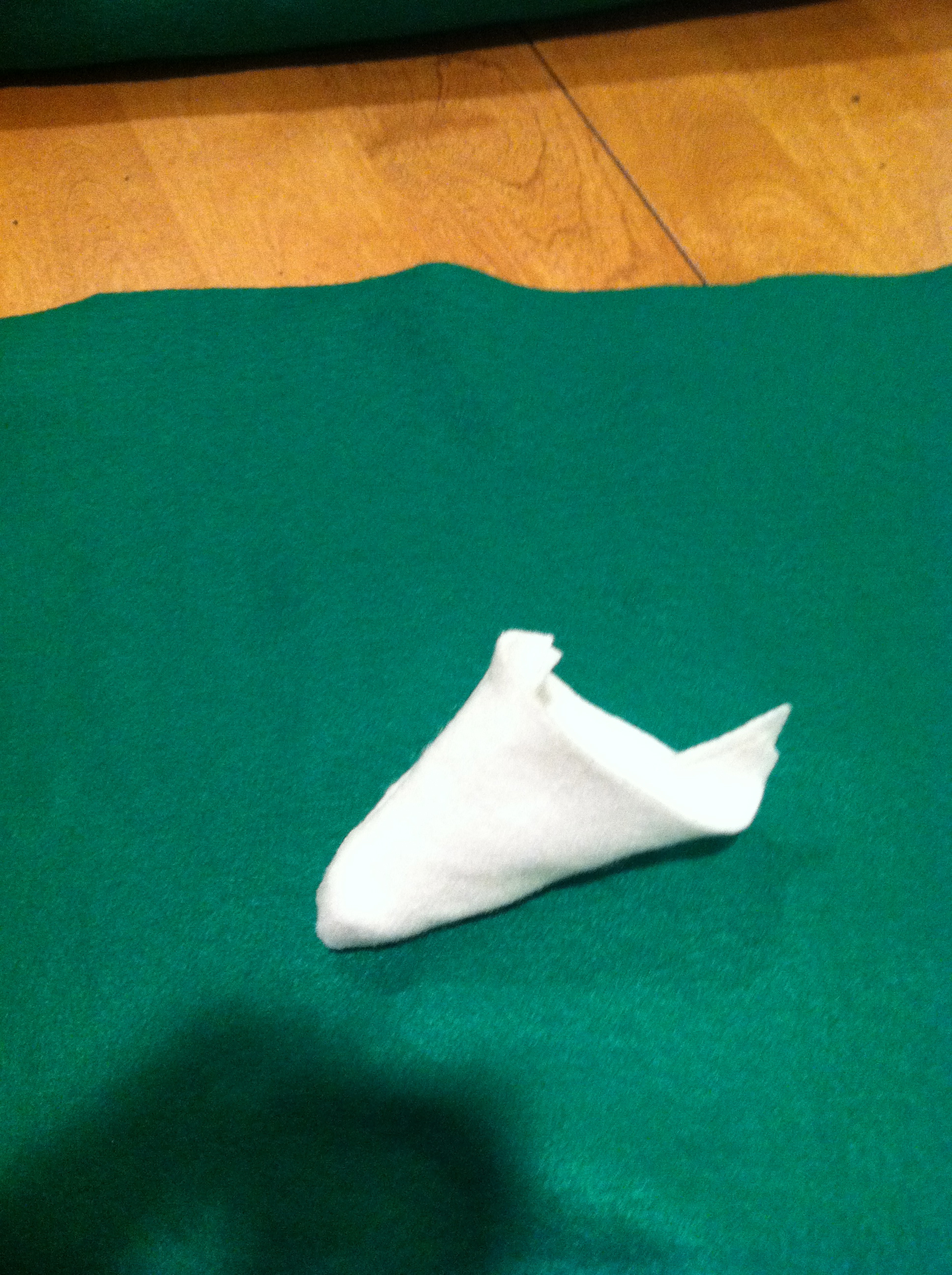 To glue both parts of the helmet together, I put velcro on just to gauge where to place the glue. The glue gun glue is surprisingly very strong. Here is a picture of it sitting on my table. 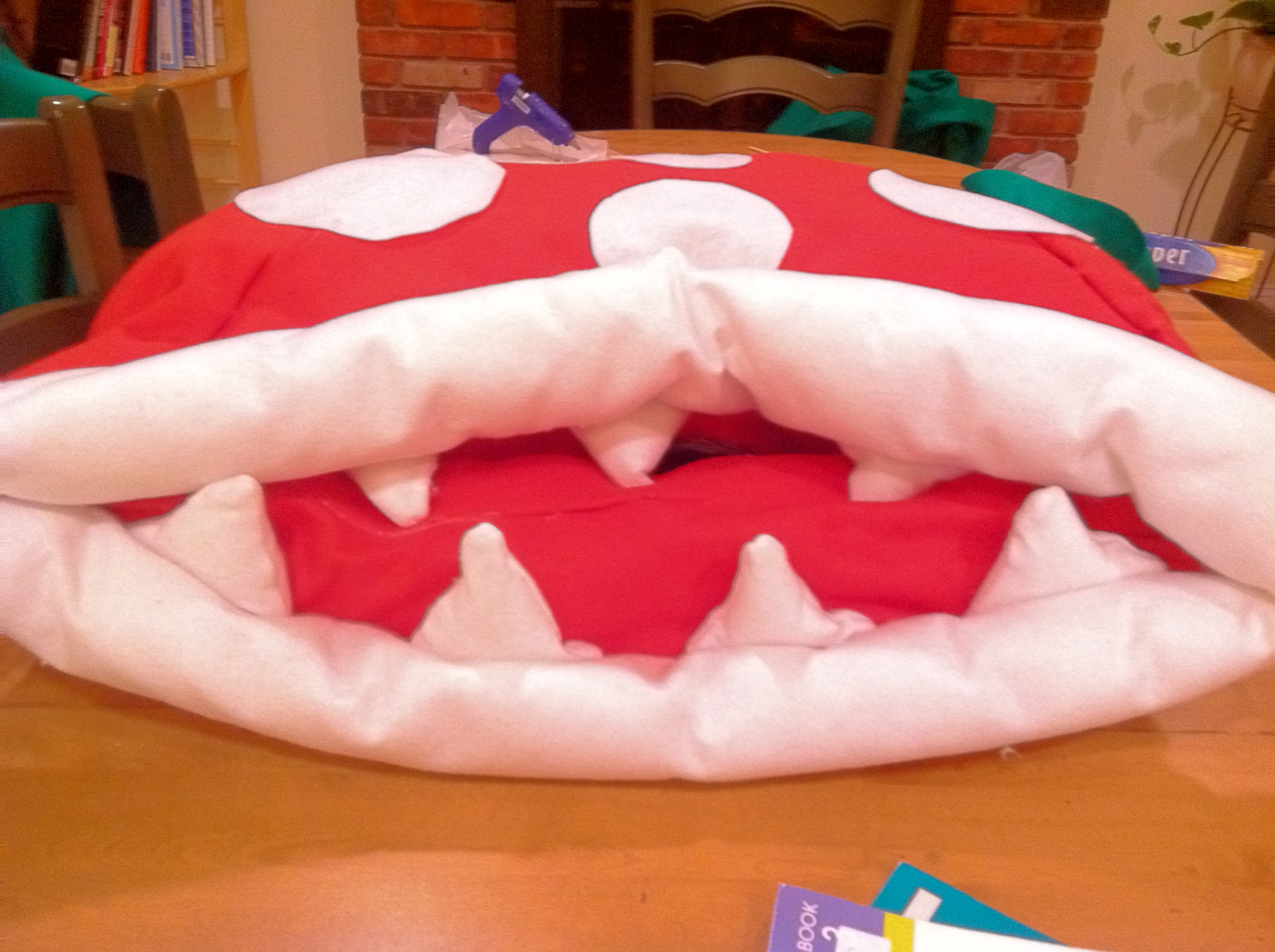 There wasn’t supposed to be a Step 10, but I found out the headpiece was leaning forward because of the extra weight with the lips and bottom hinge. My wonderful husband, Andrew [Editor’s Note: She actually wrote that of her own free will! – Andrew], thought of bracing it in the back somehow. Since it was plant, I thought why not brace it with a stem? I quickly got a piece of green felt, stuffed and glued it to the red head piece. 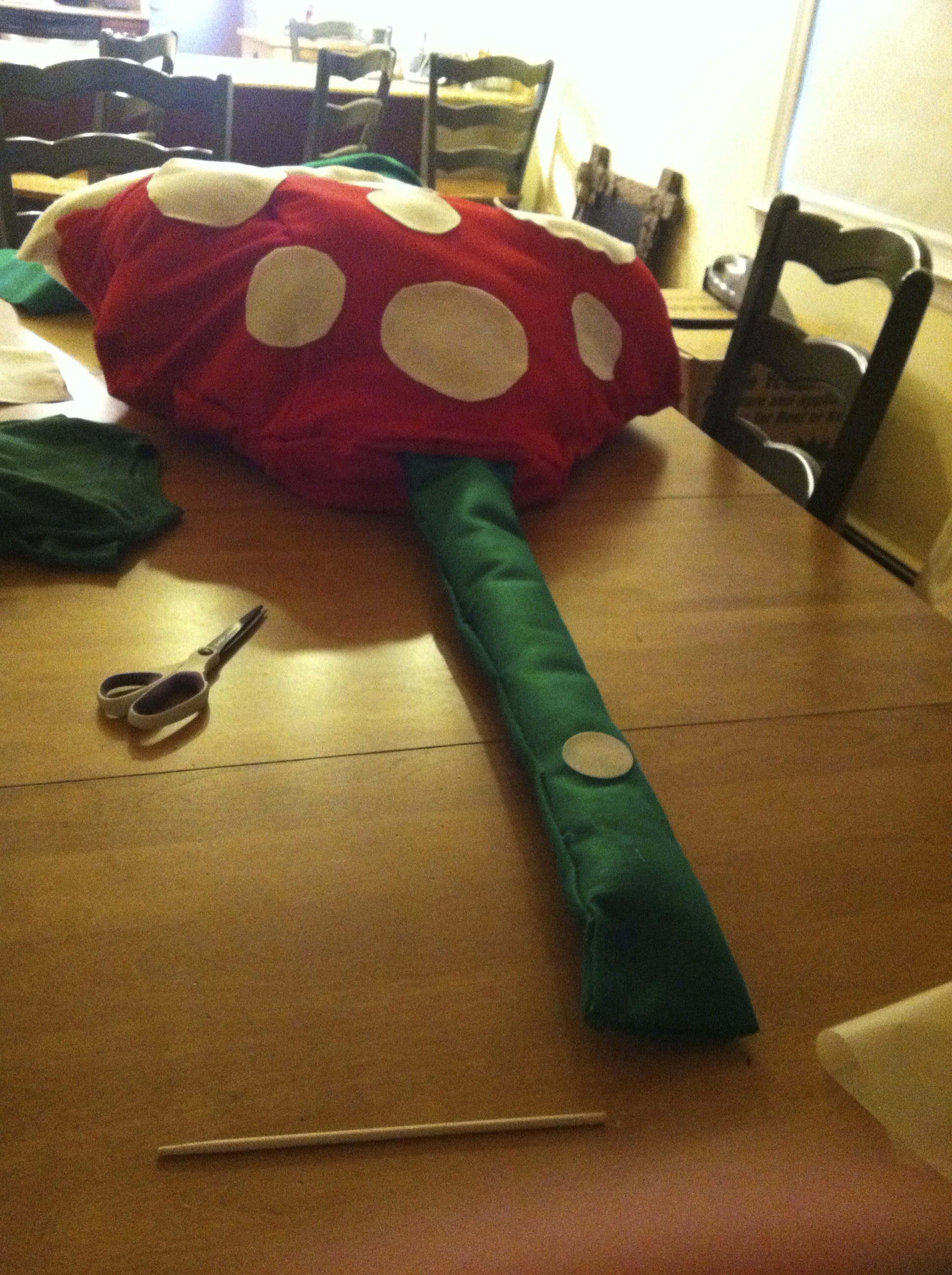 The question now was where to attach it (You can see I put Velcro on the bottom of the stem). At first I attached to the inside of the pipe but it made the pipe bunch up in the back. So instead, I made a garter (for lack of a better word) to put around Jason’s leg, which will act as the attachment point for the stem. 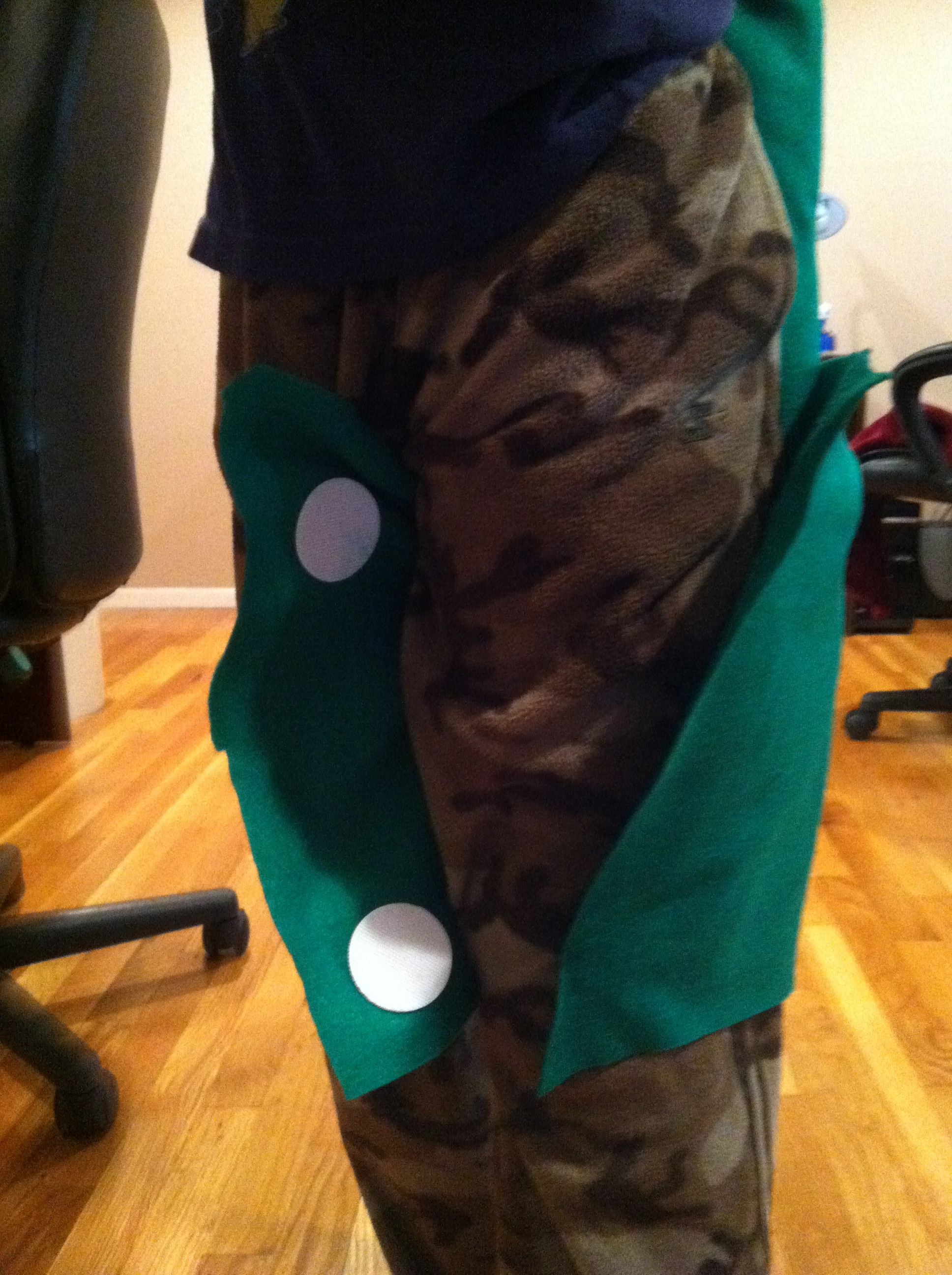 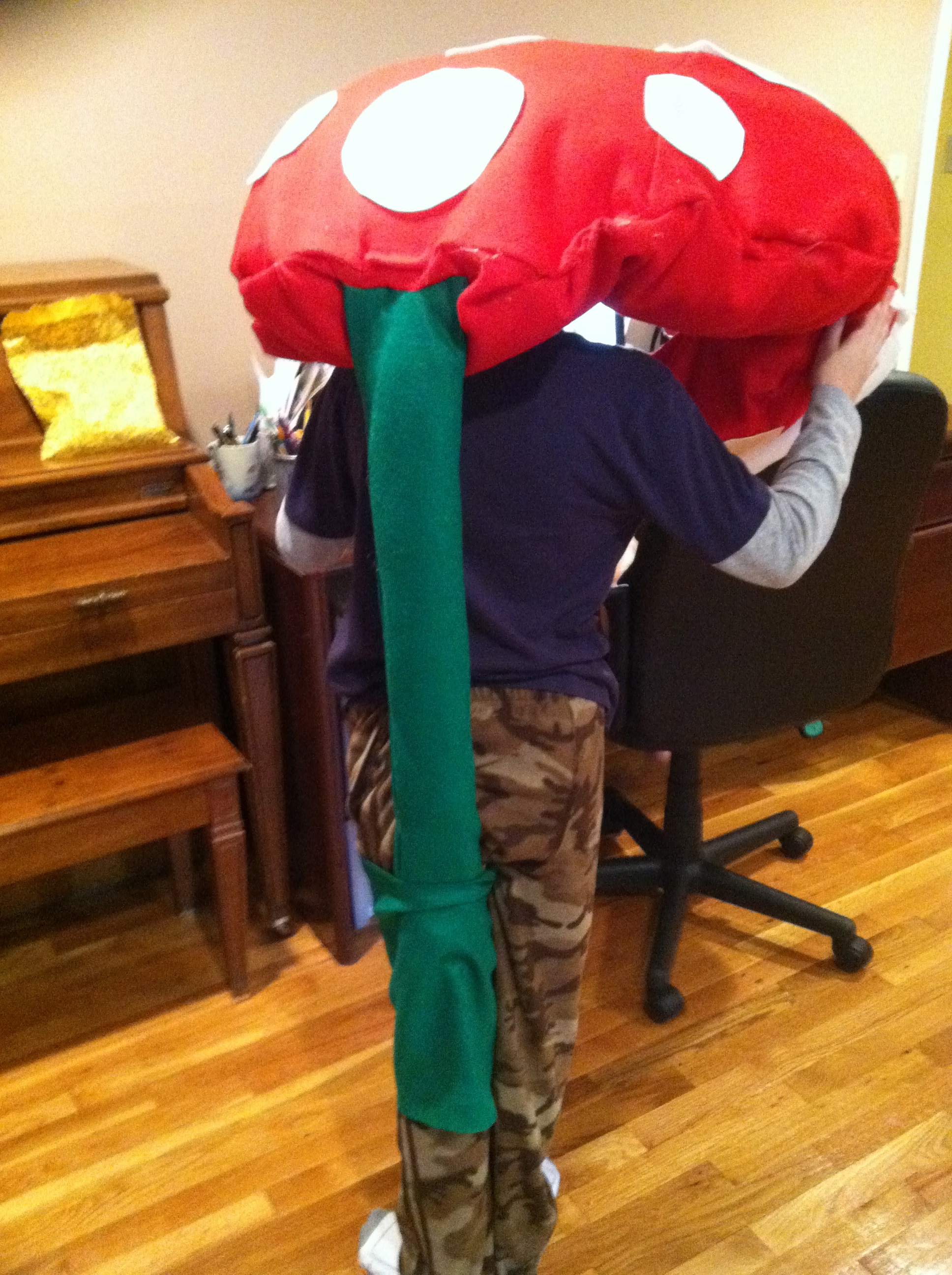 I ran to Walmart, got a green T-shirt and was finally done two weeks later. Here is the finished piranha plant costume! 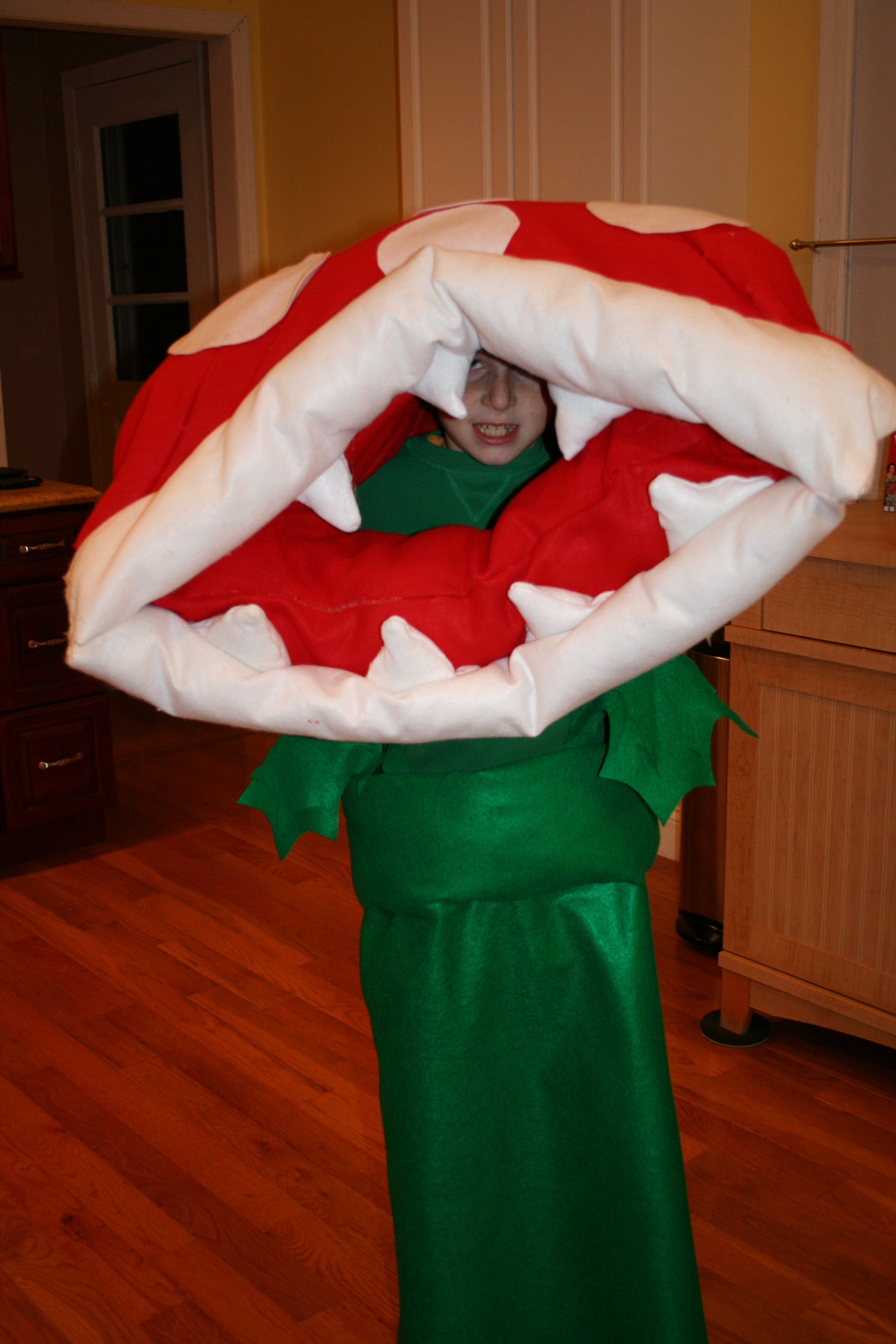 His favorite part was the leaf hands!

Here is the back view: 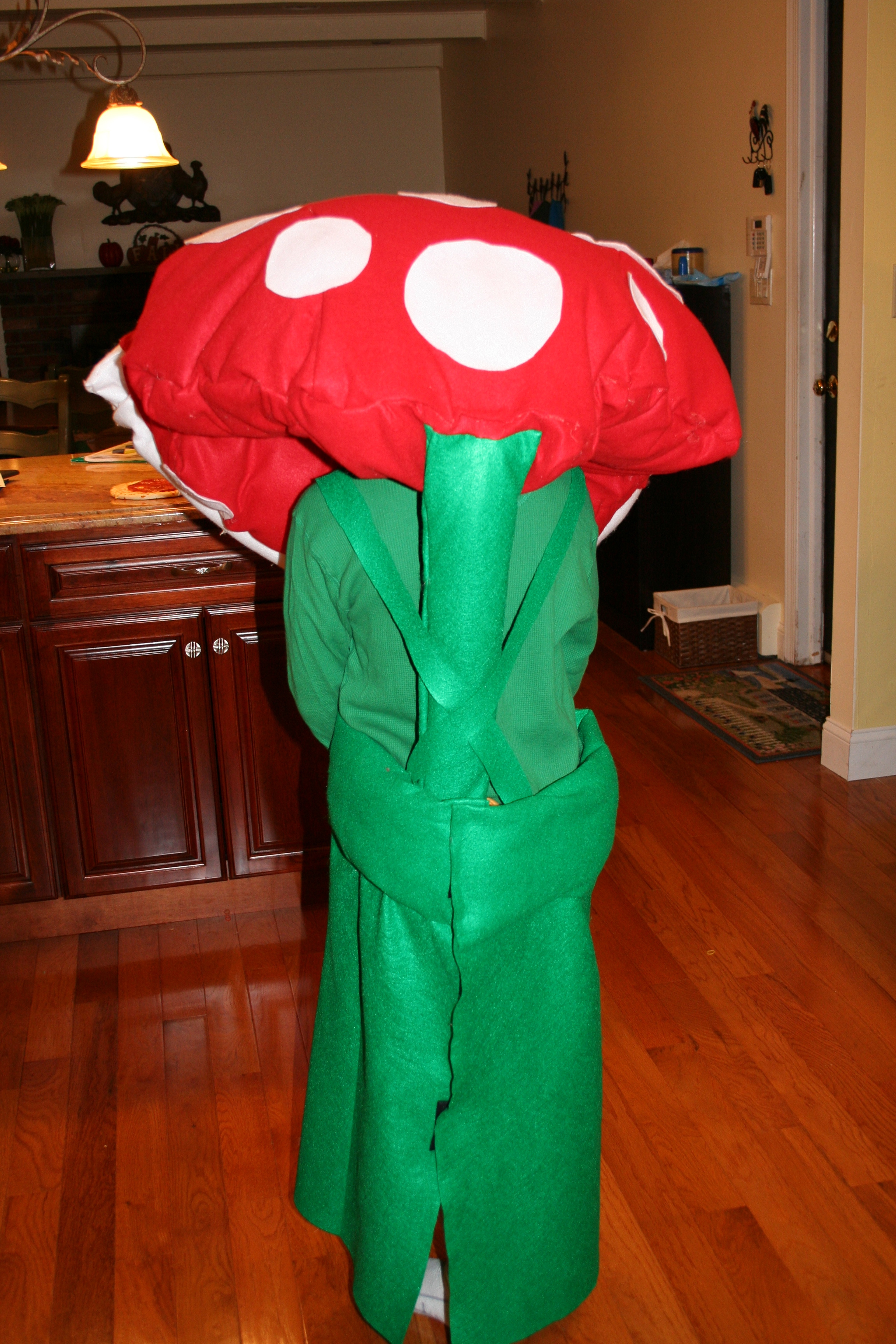 Comparison pic to the original. How did I do? 🙂 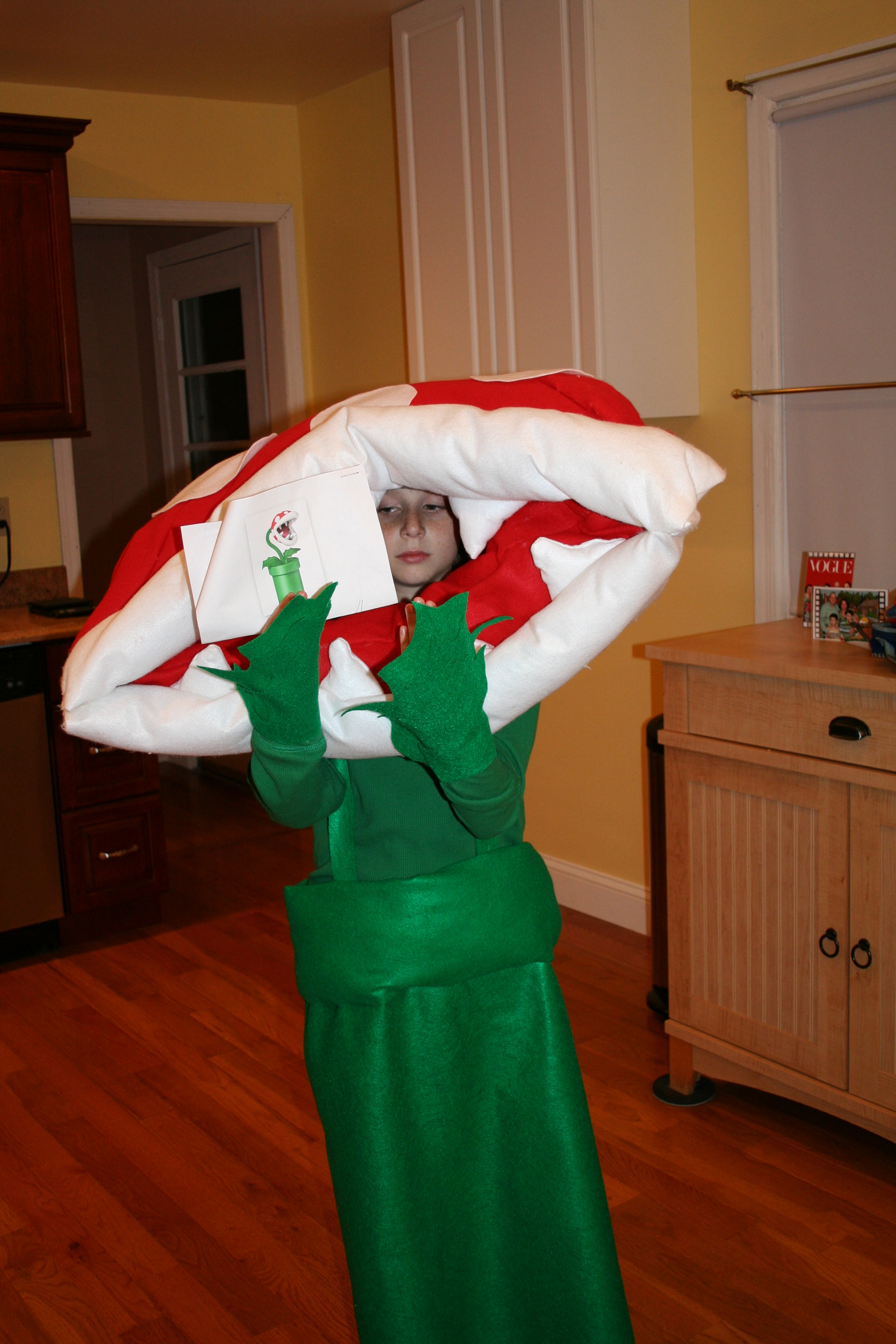 Lastly, Jason doing what any piranha plant would do: eat his little brother!! 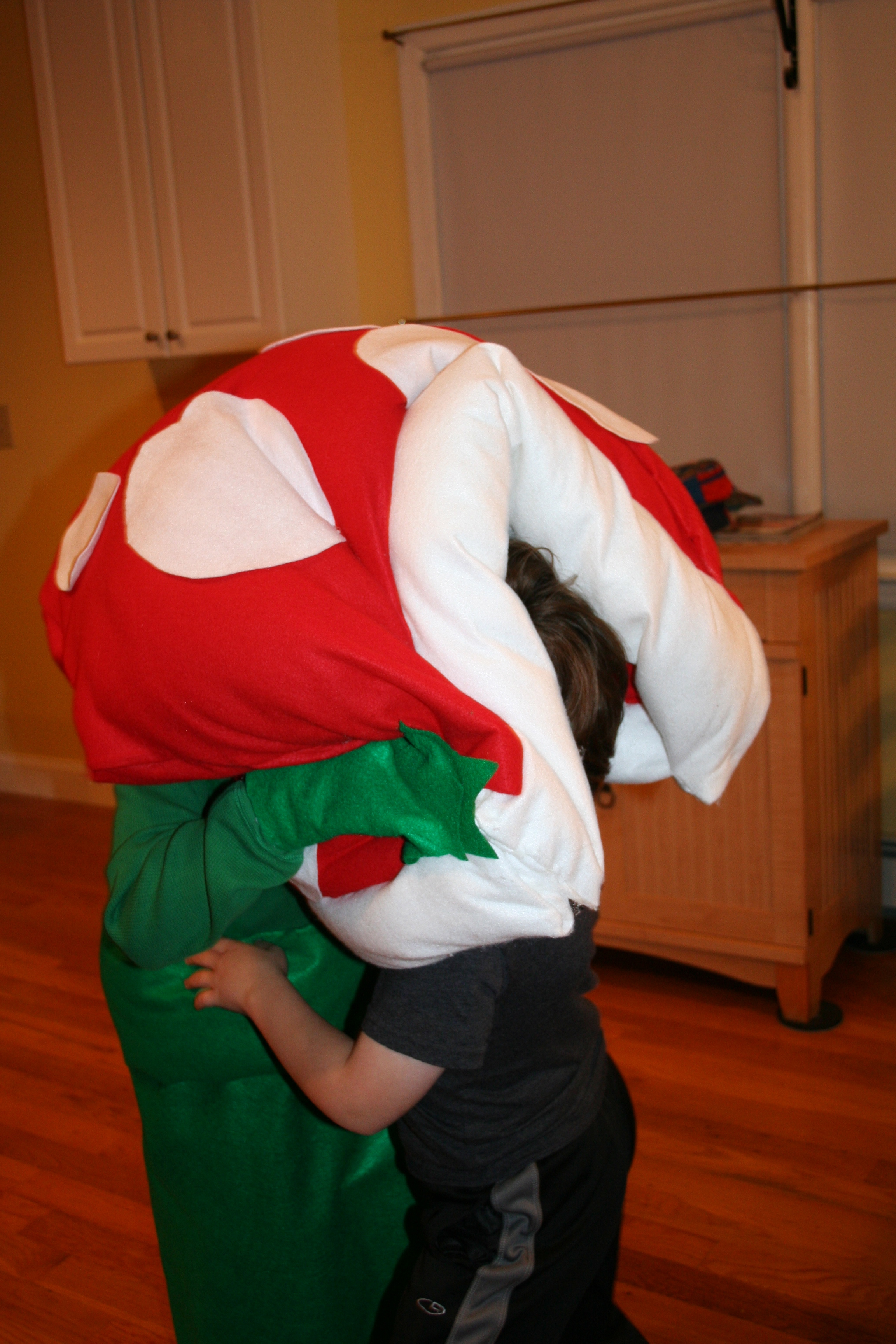 37 thoughts on “How to Make Your Very Own Super Mario Bros. Piranha Plant Costume”