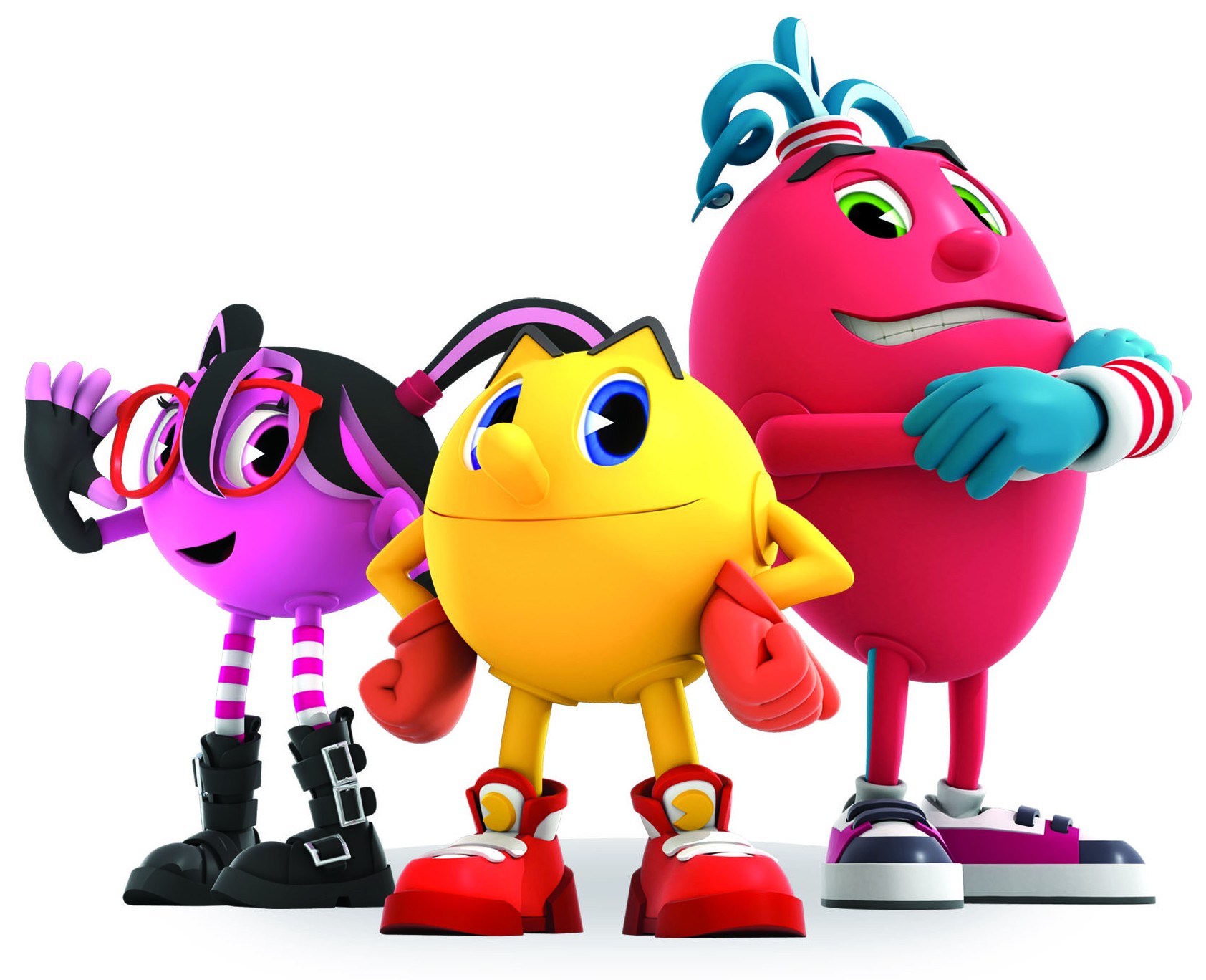 This weekend I had a fever. Pac-Man Fever, that is! (Cue the ’80s soundtrack, boys!)

That’s right, Pac is Back! Tying in to the new pac-Man cartoon on Disney XD comes Pac-Man and the Ghostly Adventures from Bandai Namco. And to celebrate, Nintendo World in Rockefeller Center had a spectacular Pac-Man Kick-Off Party this weekend!

Ryan and Allie were busy, but Jason was beside himself. Heck, the kid’s on cloud 9 anytime we just visit Nintendo World. But head down for a special “Media-Only” event to celebrate a new Pac-Man game? Yeah, he was happier than a kid from the ’80s with a roll of quarters in his pocket.

So we jumped in my car and headed to the big city for the event. We made great time, didn’t get lost and got to the store about 15 minutes early. It took Jason all of 4 seconds to spot the “hidden” swag bags.

Once we checked in, we got a bag chock full of Pac-Man goodness (sunglasses, the coolest lanyard EVER, little Pac-Man figures, and… a copy of the new Pac-Man and the Ghostly Adventures for the Wii-U! That certainly put an even bigger smile on Jason’s face. Then we ran around the store giving the game a test drive on the 3DS and the Wii-U.

To keep things moving, a scavenger hunt throughout the store had us chasing blue ghosts to find special letters. After you find them all, it spells a phrase which you write on a card and submit for a random raffle. We’re still anxiously awaiting our phone call telling us we won the Grand Prize. Cough cough. Any day now, Namco.

Things really got rowdy when the big man himself showed up! And yeah, he even brought a few of his ghostly friends with him.

It wouldn’t be a Pac-Man party without snacks, right? How cute are these Pac-Man and Ghost-shaped cookies? Since Jason has nut allergies, we didn’t try any, but everyone seemed to be enjoying them, so I’m assuming they were as tasty as they were adorable looking.

My favorite part in the entire store is this border above the elevator. I totally want this above the front door of my house.

You never know who you may accidentally bump into at a Pac-Man event though. It seems they’ll let just about anybody in, even fellow NY daddy blogger Mitch from Gay NYC Dad. True story, he made two ghosts cry by kicking them out of this photo. The brute. 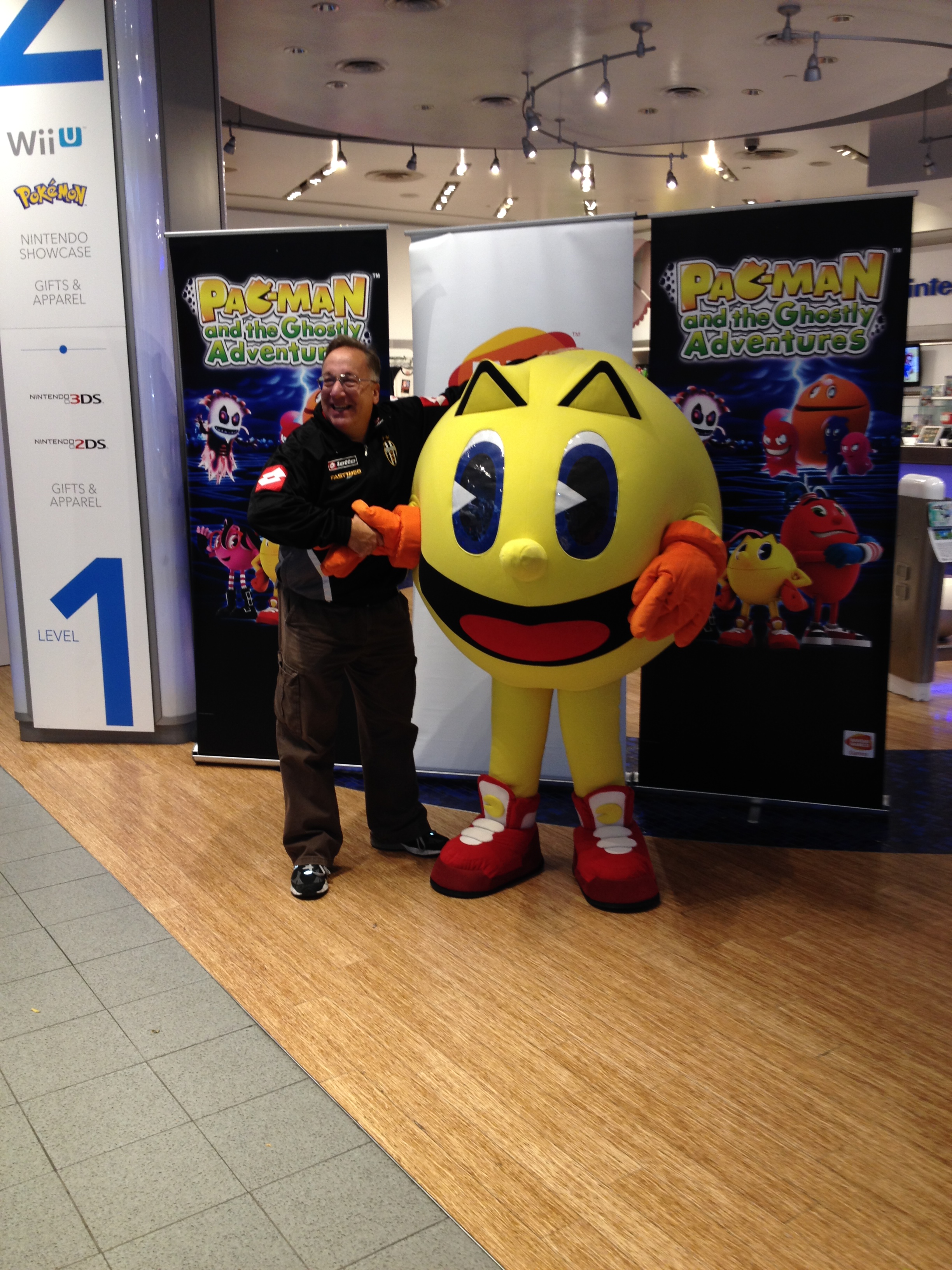 All in all, it was a blast having free reign of Nintendo World before the public could come in and join in the Pac-Man festivities.

When we got home, we played Pac-Man and the Ghostly Adventures a bit more. I like the 4-player version where we all get to be ghosts and we try to track down Pac-Man in a 3-D style board. It’s definitely challenging but fun. As for the game itself, Jason enjoyed the 3DS version though said it was a bit challenging. (Which is good. I hate when we buy him a game and he solves the whole thing in like an hour!) And he really seems to like the Wii U version so far as he chomps his way through all the worlds. 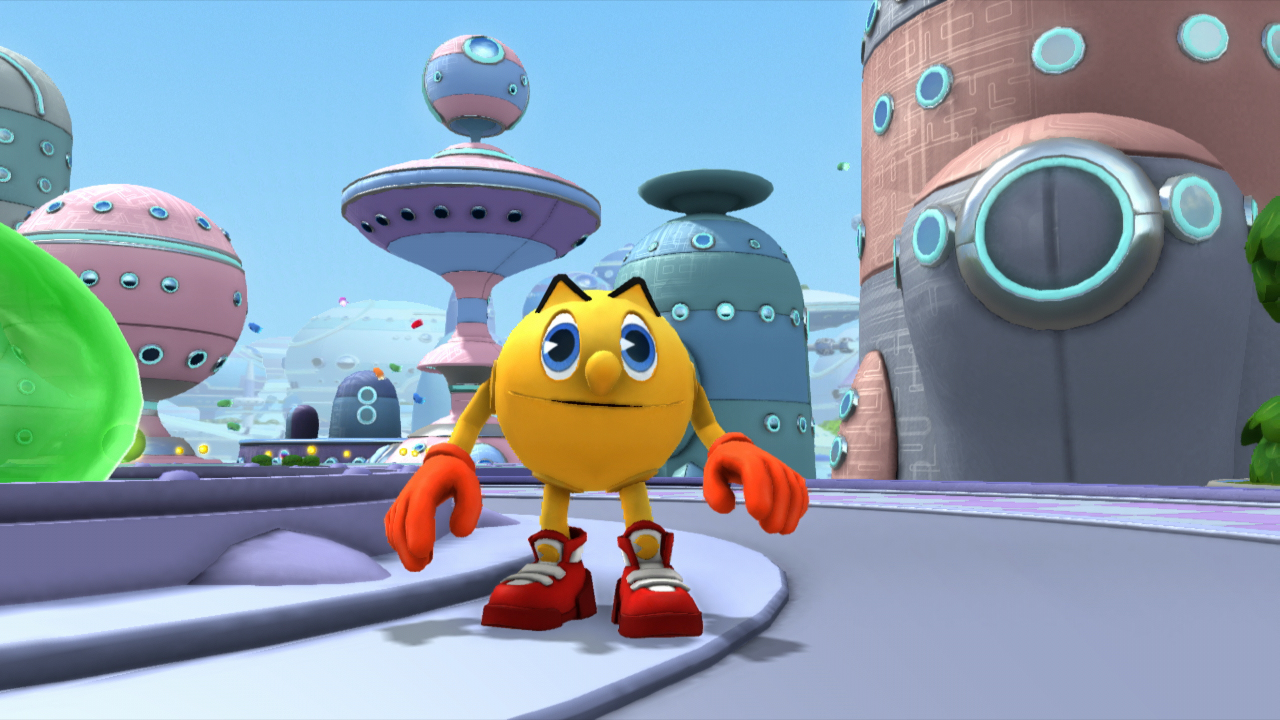 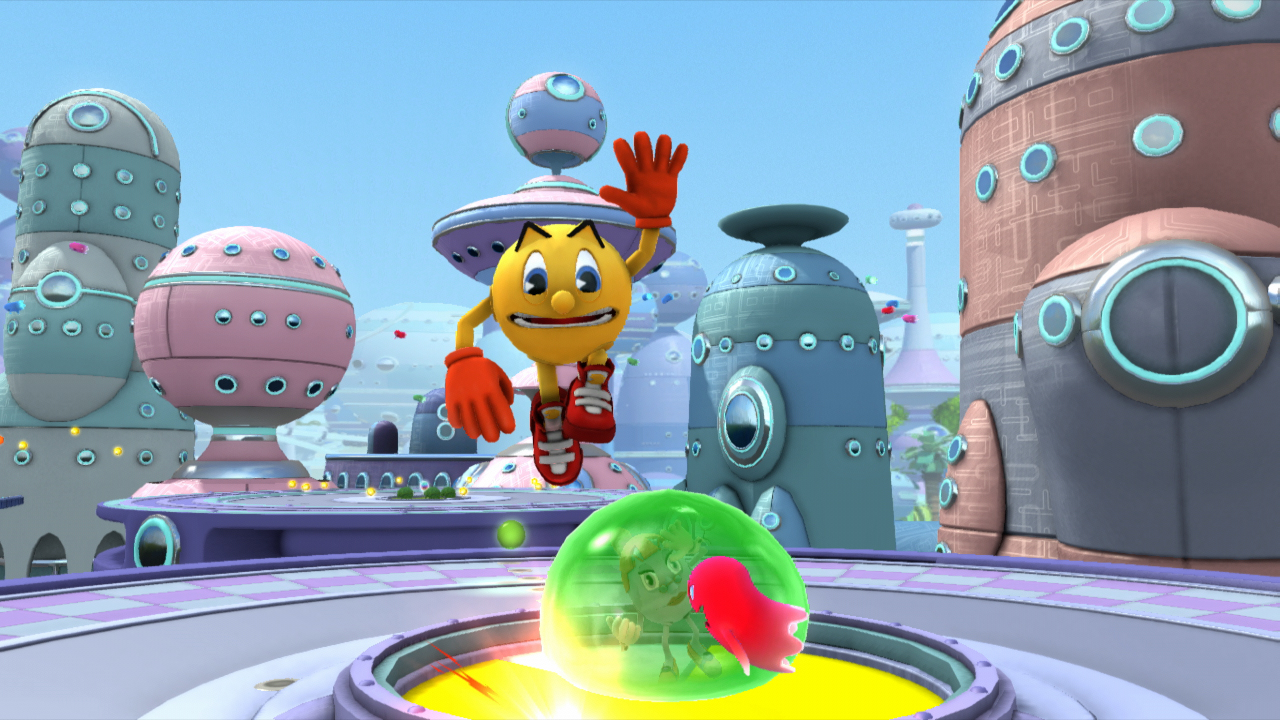 Buy Pac-Man and the Ghostly Adventures

Win Pac-Man and the Ghostly Adventures (Wii U) 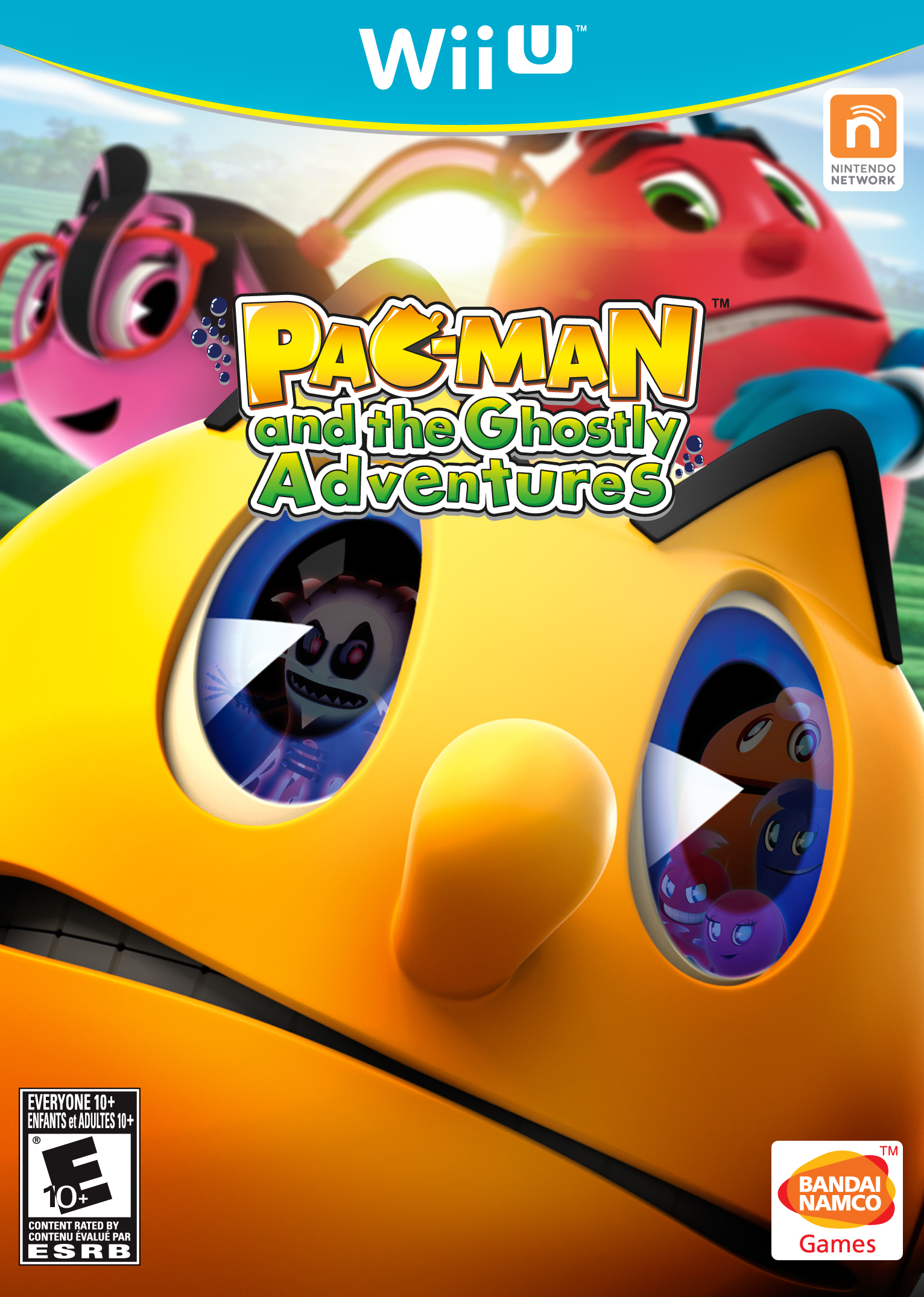 Giveaway ends on November 12, 2013 at 11:59 p.m. The 1 winner will be chosen at random and announced on this site. Giveaway is open only to legal residents of the fifty (50) United States (including District of Columbia), who are at least eighteen (18) years old at the time of entry. The 1 Winner will be notified by email and has 48 hours to respond or a new winner will be chosen.