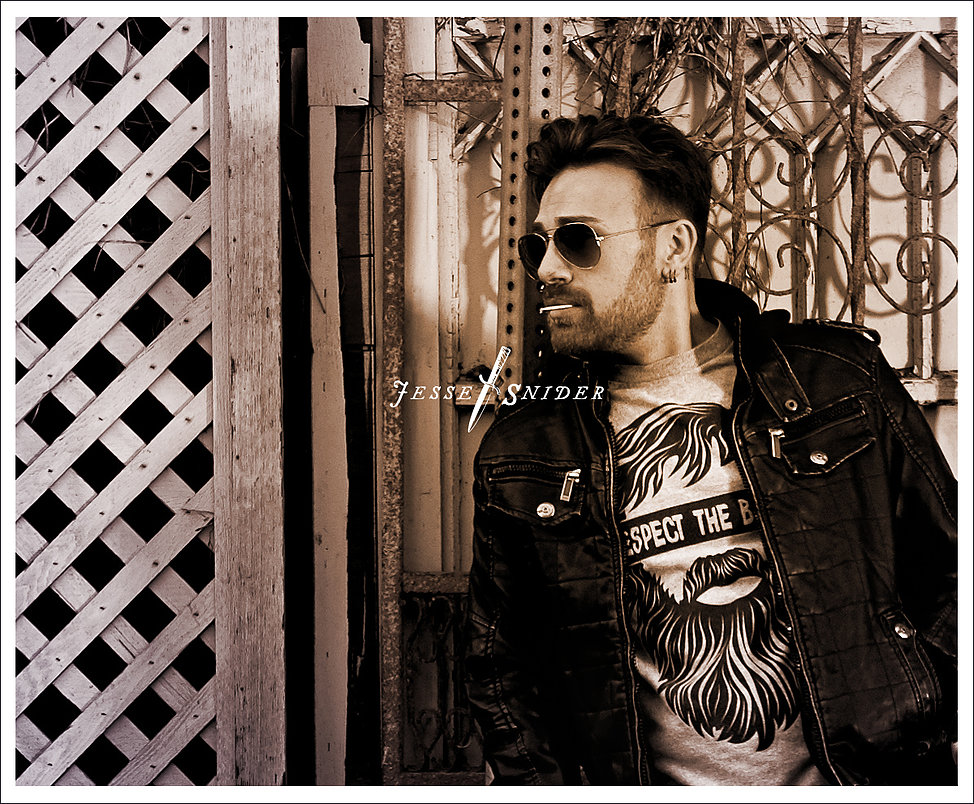 If Jesse Snider is an accurate representation of today’s Renaissance Man, then the future’s in very good hands indeed.

The 33-year-old singer certainly has a lot to say and he doesn’t care how you listen, as long as you do listen. Recently, Jesse put the bulk of his music library (many tunes previously unreleased) up on Reverbnation for anyone to hear at no cost whatsoever. Currently, his channel hosts 33 professional tracks, including the bluesy-rockin’ “Promised Land” which played on ESPN’s Monday Night Football for roughly half of last season.

“I’ve been writing a lot of songs for film/TV and commercial placements lately,” says Jesse, “and there are a number of songs that weren’t necessarily the ‘right direction’ for me musically, but are still pretty great songs. I’d been looking for a reason to put them out and once I found my new compass as a solo artist with ‘Promised Land,’ I decided to unload a bunch of things that weren’t necessarily ever going to be pushed out as a single. There’s a real mix of styles too, from blues to pop to punk and metal.”

And he’s not kidding. From slower ballads (“Go With Me,” my personal favorite) to the catchy TV-themed “Growing Up Twisted” to the metal mashup he he performed with his dad and brother “Fight to the Death!“, you’re pretty much guaranteed a variety unlike any other playlist in your library. 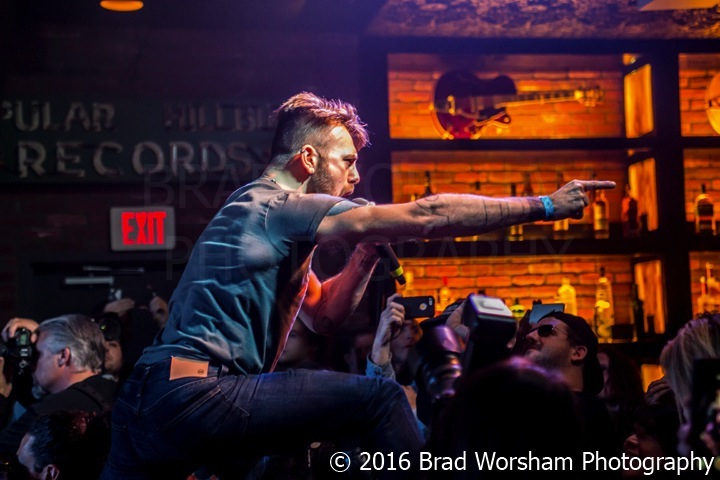 January saw the release of “Promised Land” to his channel, with “Credits Roll” taking center stage in February.  Jesse’s made a firm pledge to release one song a month forever. While he has more than enough still in his arsenal to keep him covered for years, Jesse’s constantly writing and finishing new tunes for commercials, movies and TV.

I personally met Jesse when he was just a kid, younger than my boys are today. I was working as an editor for a comic book magazine called Wizard: The Guide to Comics. Long story short, I was a huge fan of Jesse’s dad Dee Snider, the lead singer of Twisted Sister. Dee and his kids loved comics, we somehow got to talking, and Dee, Jesse and younger brother Shane came to visit our office for a tour. Surreal is a great word to describe that amazing day.

Fast forward a decade or so and Jesse suddenly was throwing his hat in the comic book ring, eventually landing writing gigs at Marvel and DC, as well as a monthly gig on Disney/Pixar’s Toy Story and a run on BOOM! Studios’ Muppets comic book. We’ve stayed in touch over the years and Jesse’s diverse career path has always fascinated me.

Songwriter. Singer. DJ. VJ. Comic book writer. Commercial voice overs. Oh yeah, not to mention husband and father to three (with a fourth on the way). Ask Jesse and it all makes perfect sense. 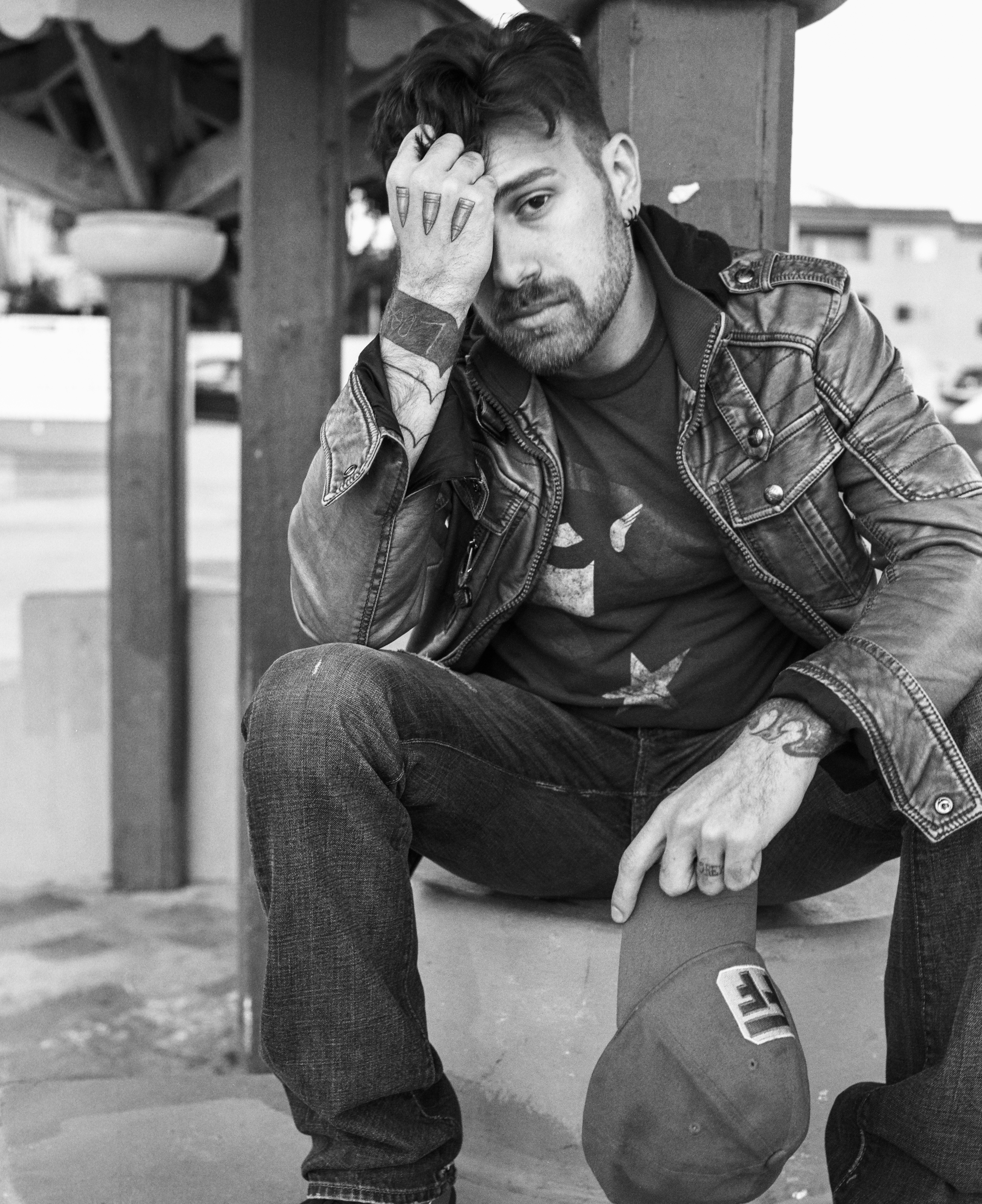 “I’m a writer,” he says. “I like to tell stories that give insight into the human experience. I don’t care if I do that by writing a comic book, a film or a song. That’s what drives me and keeps me getting up everyday, telling stories. Through music, its particularly satisfying.”

It’s no real shock that Jesse got his start in music simply by watching his dad on MTV when he was a kid. Racing around and “babbling my own songs in my diaper” is certainly a great first step. These days, he looks to personal experience, society and observations for inspiration.

One thing you will notice about Jesse is that the “kid” is damn positive. He’s always fired up to do the right thing. To fight the good fight. To get motivated, empowered and just be all-around cheerful and upbeat. And all of that ties back to why you can grab all of his songs for free right now.

“I gave up on making money from my music long ago, but I didn’t give up on making it,” he says.” I have something to say. A lot of things actually and I will be heard. My approach is to not fight the tide of the music listening audience. If you want my music, it is available to you. If you want to stream it on Spotify or Pandora, you can, and if you want to pay iTunes a bunch of money and me a few cents to own it and feel righteous about it you can do that too. I only care that you listen.” 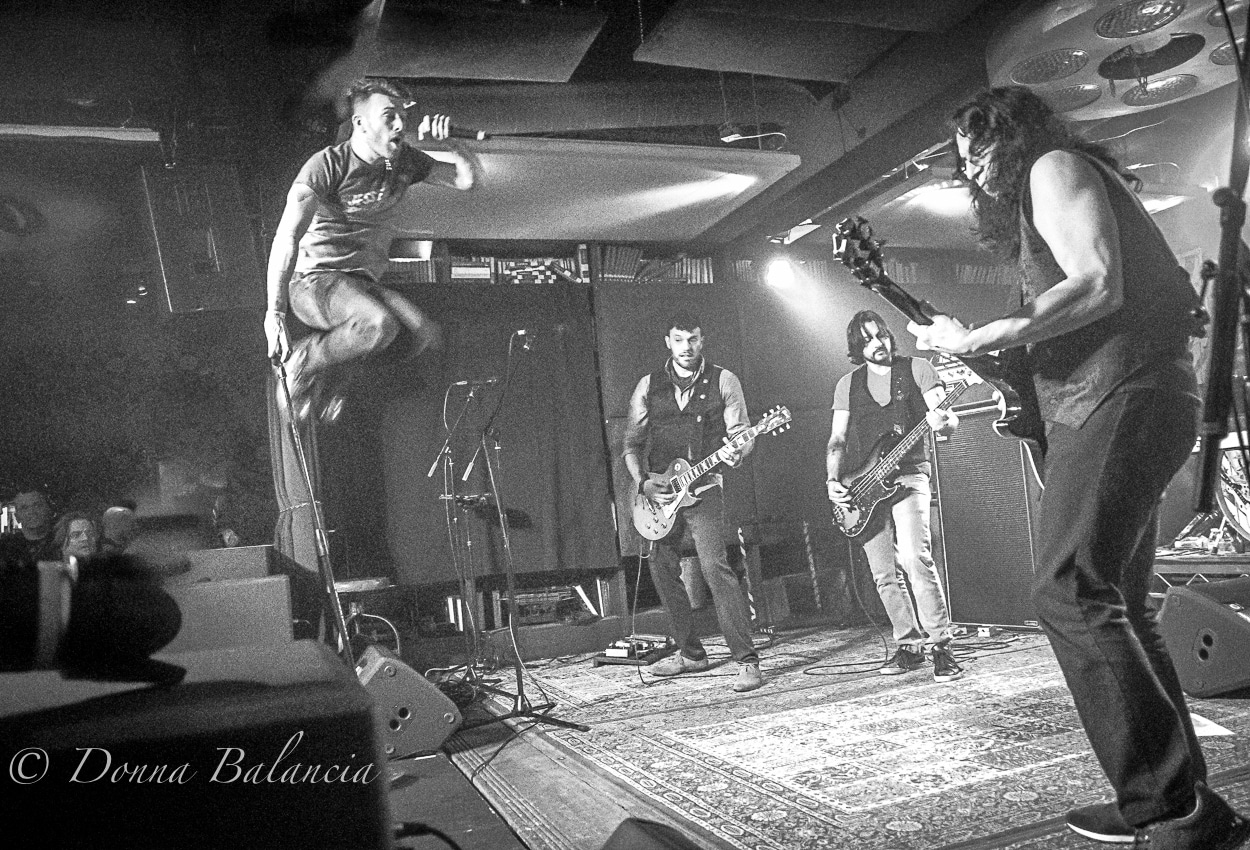 Through his music, Jesse has some incredibly lofty goals. No, he’s not thinking Platinum Records or Grammys. He has much higher dreams in mind.

“World peace. I know it sounds crazy but I believe music has the power to bring us together and I’m gonna try to bring the world together through my music.”

Up next for the oldest Snider boy is a project that combines two of Jesse’s biggest passions: comic books and music. In collaboration with singer-songwriter/producer Will Knox, the Black Light District project is a mini-album called “6issues,” which kicks off in March. Each song features a four-page comic book that represents a different track on the album, featuring comic talent Chris Burnham, Jason Pearson, JK Woodward, Andrea Tamme, David Witt, and an old school issue by Phil Hester w/ Erik Larsen & Chris Eliopoulos.

“You read while you listen to learn the lyrics and experience the meaning the artists found in the songs,” says Jesse. “Each track was inspired by comic book mythology. But who are the real life super heroes? Or better, who are they meant to be? Perhaps the leaders of the world, right? This is probably the most personal group of songs I’ve ever written. But I had to get there through comic book metaphors.” 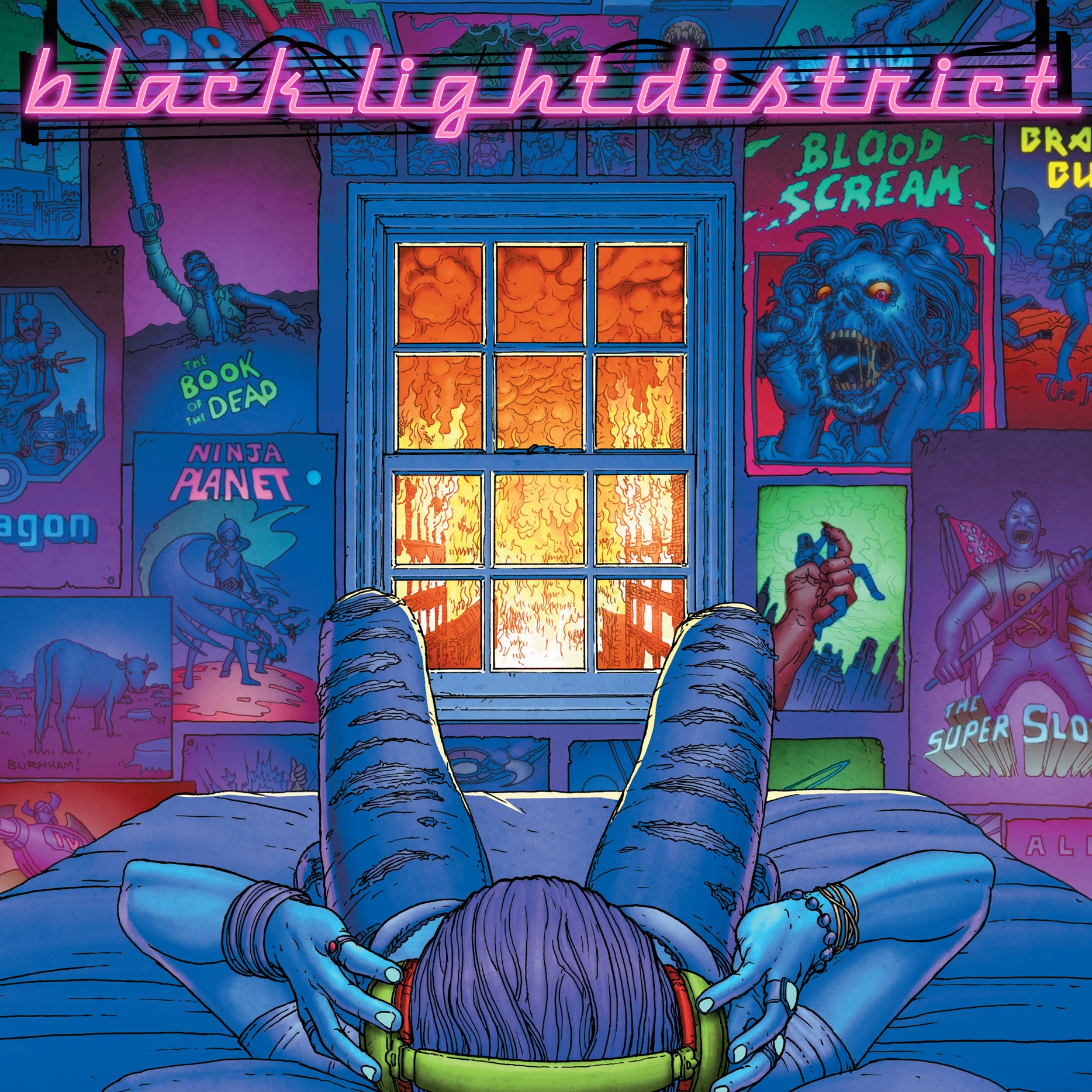 While you’ll need to wait for the videos and comics, you can start listening to the songs on Reverbnation:

Symptoms – Inspired by a Tony Moore “The Walking Dead” zombie black light poster in Jesse’s studio, this one’s about money in politics. “We used the zombie virus as a metaphor for greed being spread around.”

Green – You won’t like this song when it’s angry. Yeah, clearly inspired by The Hulk, this tune is “about not being able to find inner peace and looking around at all the people who seem to have it.”

Madhattan – What started as a song mainly about The Manhattan Project which created the Atomic Bomb and how conflicted Oppenheimer was over how his creation would be used, this one began to resonate with Jesse in terms of how he found himself and his comic book work getting kicked around at Marvel and DC. “The same way we thought Oppenheimer felt about losing control of his creations really resonated with me as well.”

Frozen – Inspired by Captain America’s time spent frozen in ice, this one takes a look at the times everyone finds themselves stuck and unable to move forward in life. “Captain America is such a great metaphor for that. And because of this metaphor you’re able to reach into the depths of your soul for something really really honest and you can break off a piece and share it with everyone.”

Hammer – Asgard’s favorite son Thor is the inspiration for this tune. Or rather his unliftable hammer (unless you are truly worthy) Mjolnir is. “We used it as a metaphor for the impossible task of ‘being a man’ and ‘raising a family’ in this day and age. Everyone is spread so thin it seems.”

Bizarro – Inspired by the whole concept of a Bizarro World from the Superman comics, this song makes the assumption that “we are actually living in the Bizarro World and everything is backwards of how it probably should be, specifically in the realm of American Politics.”

As someone who grew up reading/listening to those Book and Record comics from the ’80s, I for one can’t wait for 6issues to hit. For now, I’ll just sit tight and listen to a fellow comic book fanboy tell it like it is. After all, the soundtrack of the future sounds pretty good to me.

“Music is a way to connect straight into people’s souls and make them feel something, let them know something,” says Jesse. “It is a powerful weapon and I’m going to use it to help heal and change the world.”

Listen to Jesse’s Channel on Reverbnation