Ryan’s been asking loads of questions lately about tattoos. How do they do them? Why do people get them? Do they hurt? Does it bleed? Does it hurt? Do the needles hurt?

You get the picture.

After I briefly explained the process to him (not that I have any tattoos, mind you), I asked Ryan if he ever wanted to get a tattoo. Without skipping a beat, he responded with, “I’m never gonna get one. They’re expensive and they hurt!”

So I got the idea that I’d ask a number of my friends who have tattoos whether or not it really did hurt, as well as why they got them in the first place. I thought this’d be a good opportunity for Ryan to ask his questions and then help me put together a blog post around it. And that’s exactly what we did.

Along the way, I asked Ryan what kind of tattoo he’d want if he did decide to ever get one. He gave it a bit of thought and ultimately came up with the coolest sounding tattoo ever.

“I’d get a monkey riding a shark, and he’s holding a machine gun. Also, a big circle around it all with the name RYAN on top. My two favorite animals are sharks and monkeys. And I just wanted a machine gun because it’s silly.”

I couldn’t resist hiring someone to actually draw up Ryan’s inspiring tattoo design. So I did. I hit my favorite site Fiverr, and found a fantastic artist to work with. (Aldeen wasn’t just awesome to work with, she did a gorgeous job. I highly recommend using her if you ever need a quick $5 illustration!)

Here’s what she came up with! 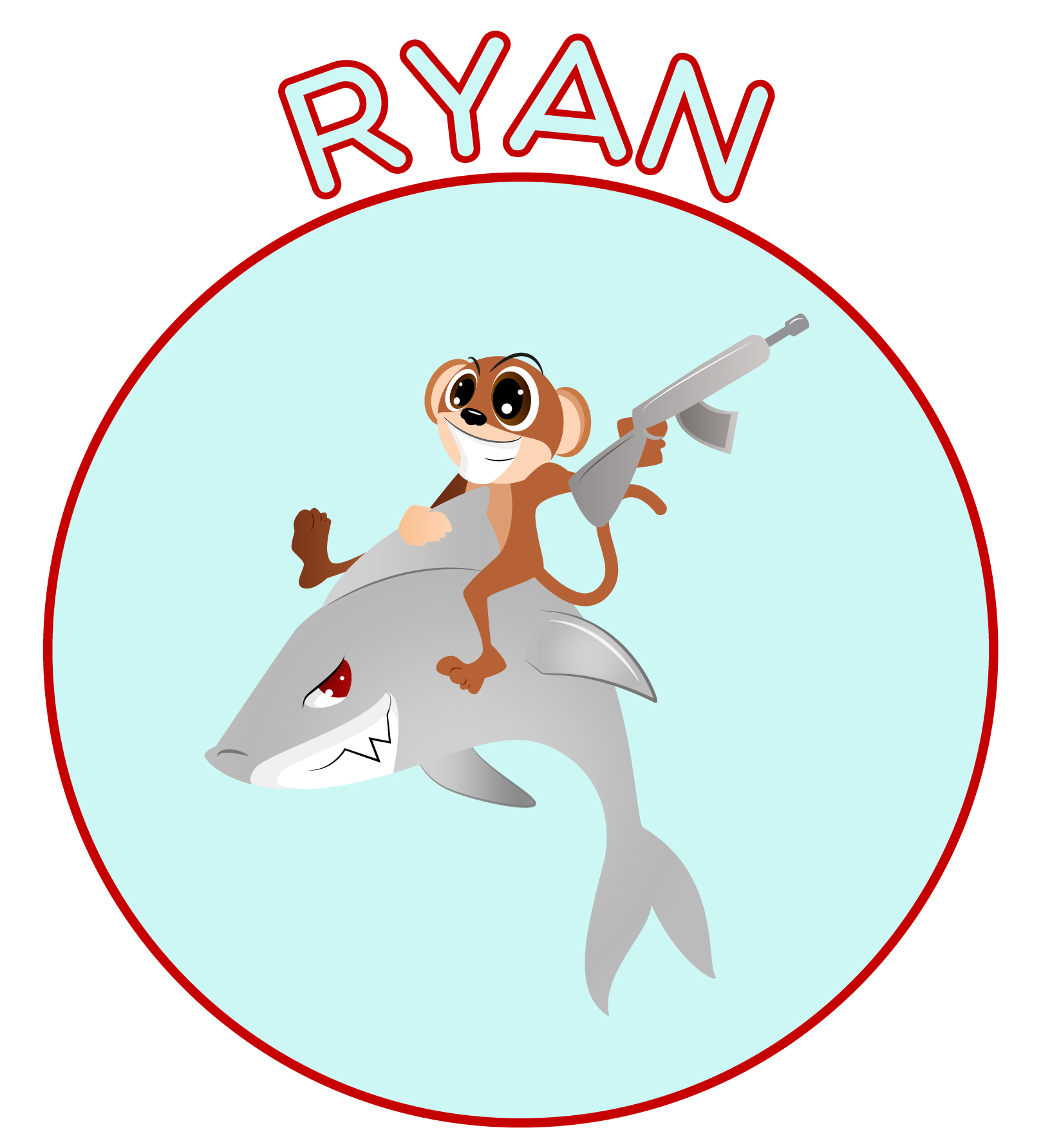 Pretty cool, huh? I may just get this printed out on a T-shirt for Ryan to wear. Or maybe turn it into some temporary tattoos.

Anyways, with Ryan’s help, we put together a handful of questions and reached out to my tattoo friends. The following folks were kind enough to share their stories and pictures here, so read on to discover what Ryan and I learned from this project.

Lisa
My Thoughts Ideas and Ramblings 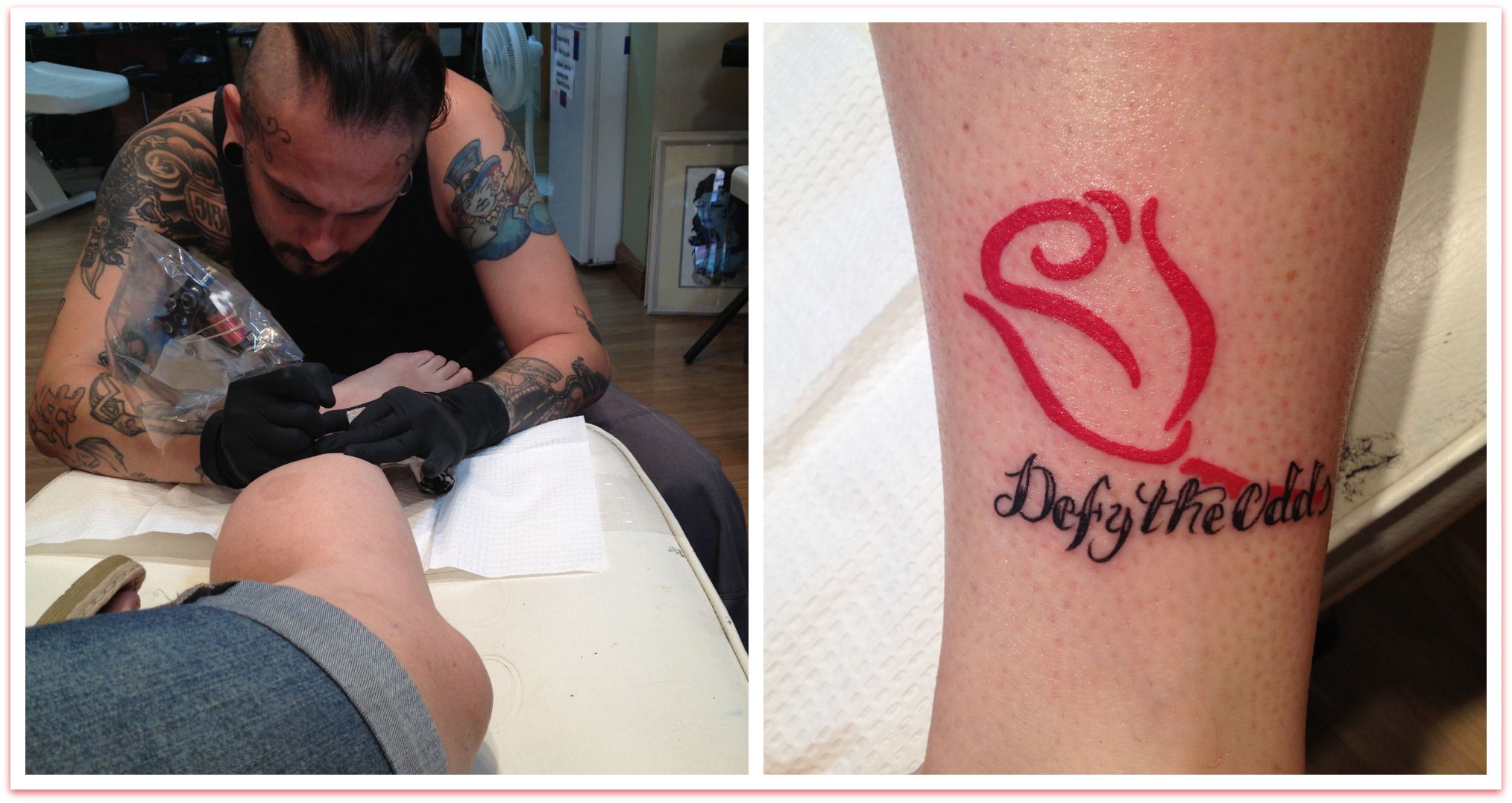 “The one I got when I was 19 I drew myself.  I’m considering getting that one redone because I had them use too much black and I don’t like it as much anymore.  My husband thinks its fine so its just a me thing. The second one is a tattoo I got after my cousin died of Cystic Fibrosis.  He was in his early 30s and wanted a tattoo.  However, his doctors wouldn’t let him get one.  My cousin Val and I got them in memory of him.  We did the Cystic Fibrosis rose with the saying he wanted to get tattoo ‘Defy the Odds’.”

Teresa
Making it All Work

Did it hurt? At times, yes they hurt. The one on my back hurt the worst. My husband says the one on his shin hurt the worst. That is probably because the skin is so close to the bone there. [NOTE: The purple one and symbol in lower left are Teresa’s. The others are her husband’s.] 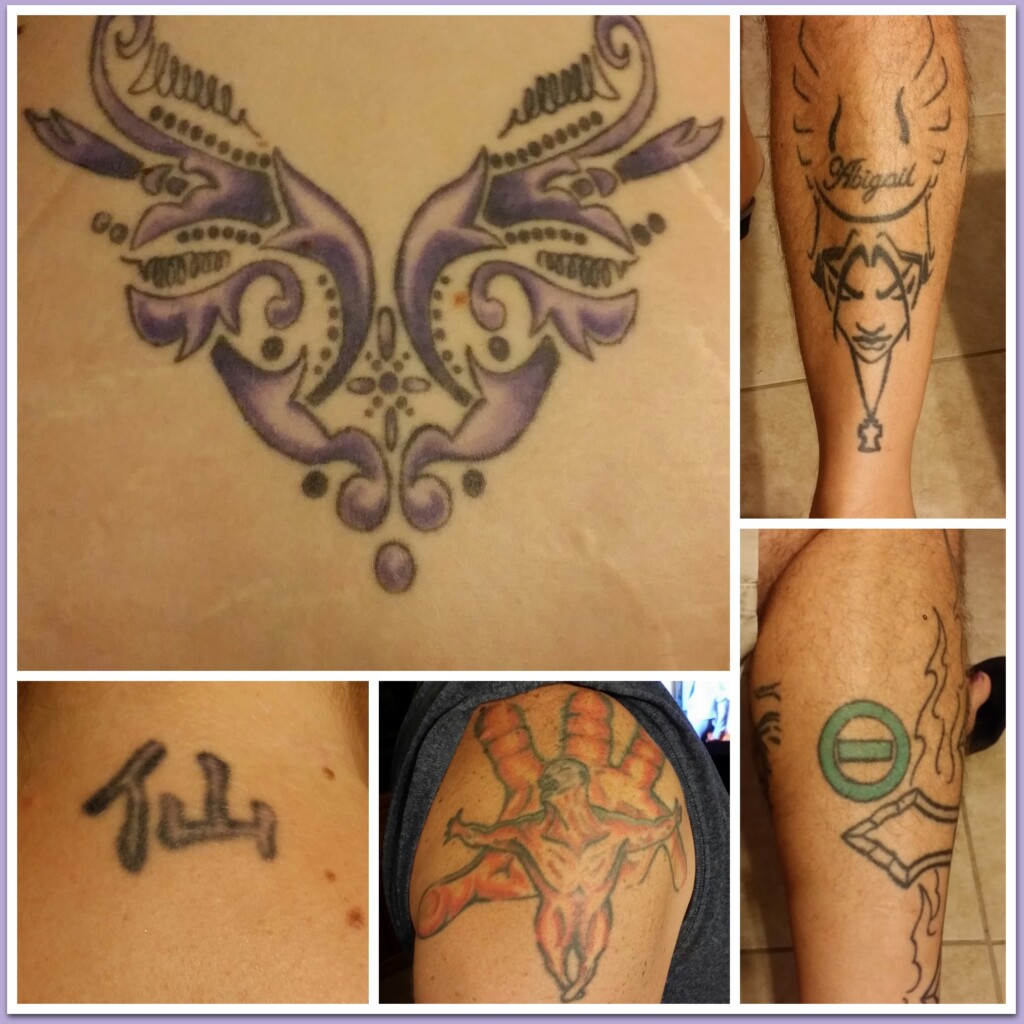 “Each of my tattoos has a meaning. The one on the back of my neck is a memorial to my sister that died. I think that each tattoo should have a significant meaning to the person getting them. My husband’s first tattoo was a heavy metal band symbol that he really related to. The lyrics of a song they wrote really helped him through a rough time.”

Eliza
The Life of a Home Mom

Did it hurt? Most people say it hurts but honestly I’m very ticklish and laughed the whole time. Mine is on my right shoulder blade.

“To me it was just something I thought was cool and I had wanted it for a long while but wanted to make sure it was artwork I wanted on my body for the rest of my life. I had just turned 26 and the day before I finally got my license so it was a way of becoming the woman I had wanted to be, a grown up. My tattoo is something writers call a muse. He looks like a frog (like the WB frog from years ago) in a jester’s outfit. I’m not normally a funny type of person, I come across extremely serious so many are shocked when they hear what it looks like.”

Did it hurt? Neither of them hurt. In both cases it felt like somebody was pressing sort of hard and writing on me with a ballpoint pen.

“In both cases, my tattoos represent chapters in my life. The first one was a frattoo (fraternity tattoo), and it represents the 5(!) years I was in school for my BA, as well as the lifelong membership in the fraternity. I got the second one with my business partner, Missy Ward, and we both got versions of our company logo. We’ve been running the company for 11 years, so it’s a quarter of my life dedicated to it.” 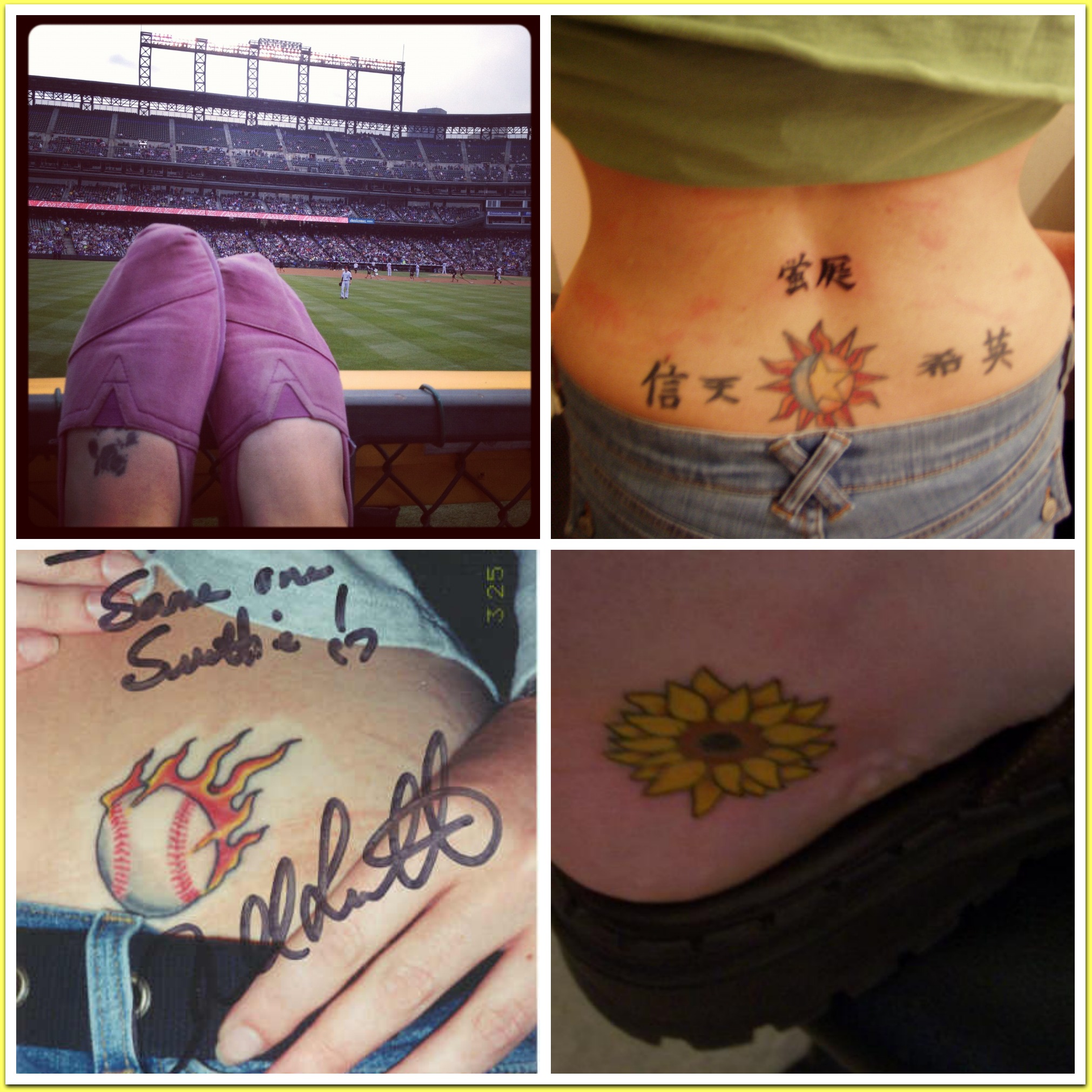 “My tattoos all mean something to me. I guess they are permanent reminders of the important things in my life. Also, I really do think that tasteful (not ones with swear words or naked people or ones that look like a 5 year old did them) tattoos are attractive. My violet on my shoulder blade is in memory of my grandma Violet. I got it about a month after she died. Now my daughter’s name is Violet. My paw print on my foot is my cat’s exact paw print. When she died I had it done. She was very special to us. My sunflower on my ankle/foot is my favorite flower, it makes me happy. I also had sunflowers as my wedding flowers. I have a flaming baseball on my hip. I am a big baseball fan, and most of my best friends I met through baseball.

“I have 5 kanji (Japanese) symbols. They mean faith, heaven, hope, courage, and my name. Of course, they could also mean something else like “I like salami sandwiches” for all I know. But when researching them, that’s what they told me they meant. I have a sun/moon/star on my back. I drew that myself. It’s the only one that doesn’t have a personal meaning beyond the fact that I designed it myself. I thought it looked cool.”

Did it hurt? Both of mine are in the same place on my thighs and they both hurt near my hip but the biggest part of the tattoos didn’t hurt after the outline because they were on my thigh which is a fatty area. 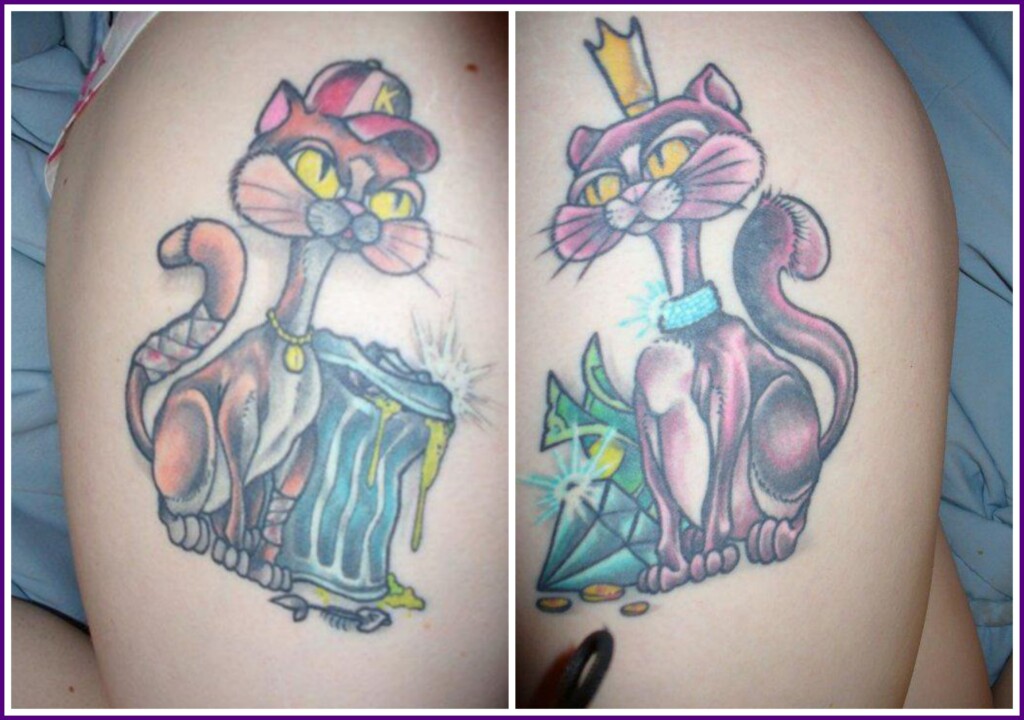 “I wanted something that showcased me. Something that I chose and worked on and would want forever.  I wanted something that no one could ever take from me. I got my cats (who are modeled after Isis, Catwoman’s cat) because I am Kat.  That is me. I have a rich kitty which is a part of my personality (strive to be better, to get rich, to make it in the world) and a poor street smart kitty who is my life. I grew up very poor. Like not eating anything but potatoes if we ate at all, and never having heat or air in our house kind of poor so my tattoos symbolize the fact that I made it despite my background.”

Did it hurt? Honestly, no. But then again I have a high tolerance for pain. I was with my husband when he got both of his tattoos and he squeezed my hand the entire time. He squeezed so hard I lost feeling in my hand for a while. LOL!

“I’ve always wanted to have tattoos. I don’t really know why. My husband and I had talked about it for several years then one day he not only dared me, but double dog dared me to get one. So one day when he was at work I went to a tattoo parlor and got a tattoo. He was shocked that I did it. Never double dog (or triple dog!) dare me to do something. LOL!

“I have a honey pot with bumble bees flying around it on my lower leg near my ankle. The pot has “Hunny” written on it. I love Disney and Winnie the Pooh and friends is one of my favorite Disney characters, so the honey pot is paying homage to Disney and Winnie the Pooh. The word “Hunny” is the nickname my husband has given me since we’ve been dating. He spells it the same way too. So my tattoo also has a connection to my husband.”

Number of tattoos: 1 on my right ankle
Did it hurt? This answer is different depending on your pain threshold LOL. I personally have a high tolerance for pain which means it takes a lot for me to complain. Pain that I don’t know when it will end is harder for me to handle then pain I know will end soon. It did not feel good but I basically got use to it quickly and it felt annoying. However it did hurt more so when they got towards my ankle bone.
“I honestly do not know [why I got a tattoo]. At the time I just liked them. However now that I’m older, I see them more for meaning. I would like to get my kids names put around my tattoo and the second tattoo I want to get is a purple butterfly in honor of my father who passed many years ago.”

Do you have any tattoos?