I just got back from a whirlwind few days in L.A. I was out there on some not-fun personal business. For even more fun, I took the red eye flight back, leaving L.A. at 11:30 p.m. last night and arriving at JFK in New York at 7:30 a.m. Surprisingly, I made it through the entire day without passing out!

Since I took a few photos and had some fun tales, I thought I’d just share with you. Unless you want me to bring out the slide projector that is… 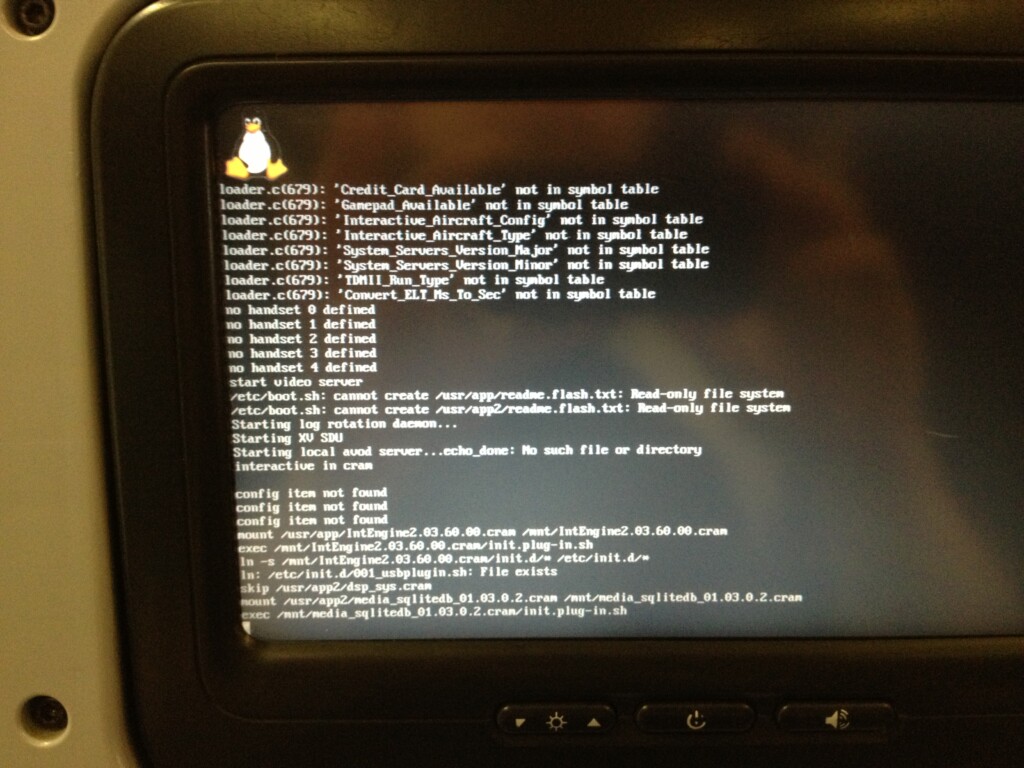 I knew it was going to be a rough trip when the TV monitor in front of my seat was showing me fun code and a Linux penguin. Sigh. Everyone else gets to watch the latest hits like Hansel and Gretel. I’m stuck deciphering code. 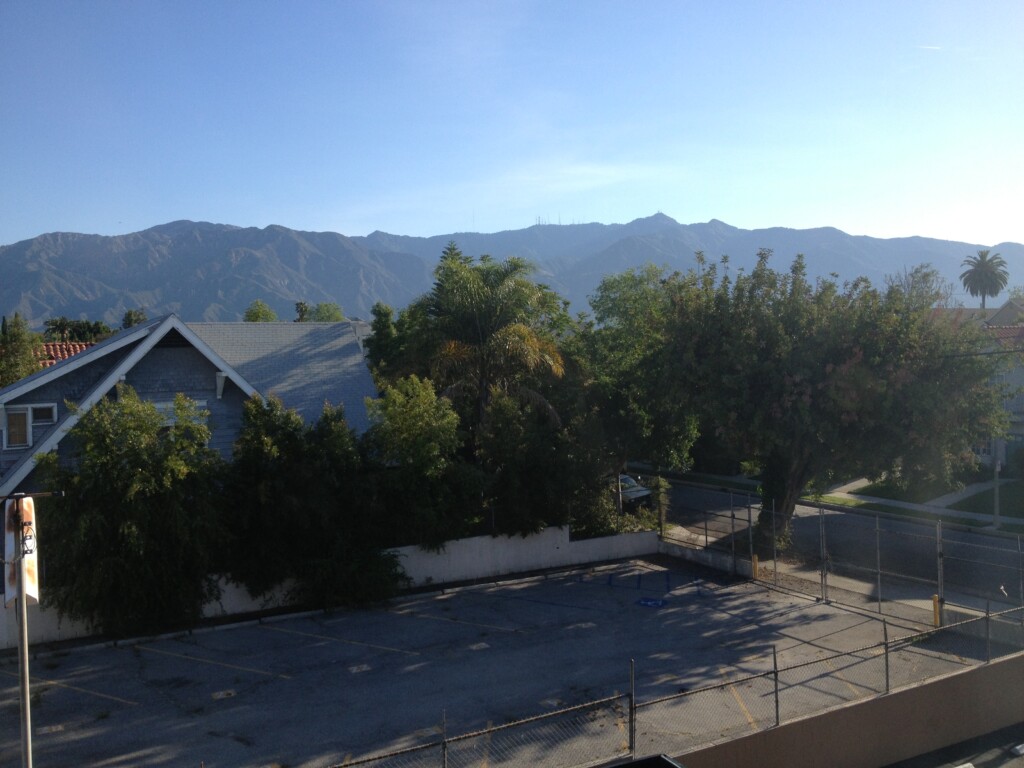 We landed no problem, rented a car and drove the hour up to Pasadena. Not too much traffic and we eventually pulled into our hotel (That would be the Vagabond Inn), which we picked because of good reviews, close proximity to where my meeting was, and because it got pretty good reviews. Overall, it was totally fine. Certainly seemed a bit dated, but for the price, it was more than adequate. Here’s the view from our room. I just love those mountains in the distance. 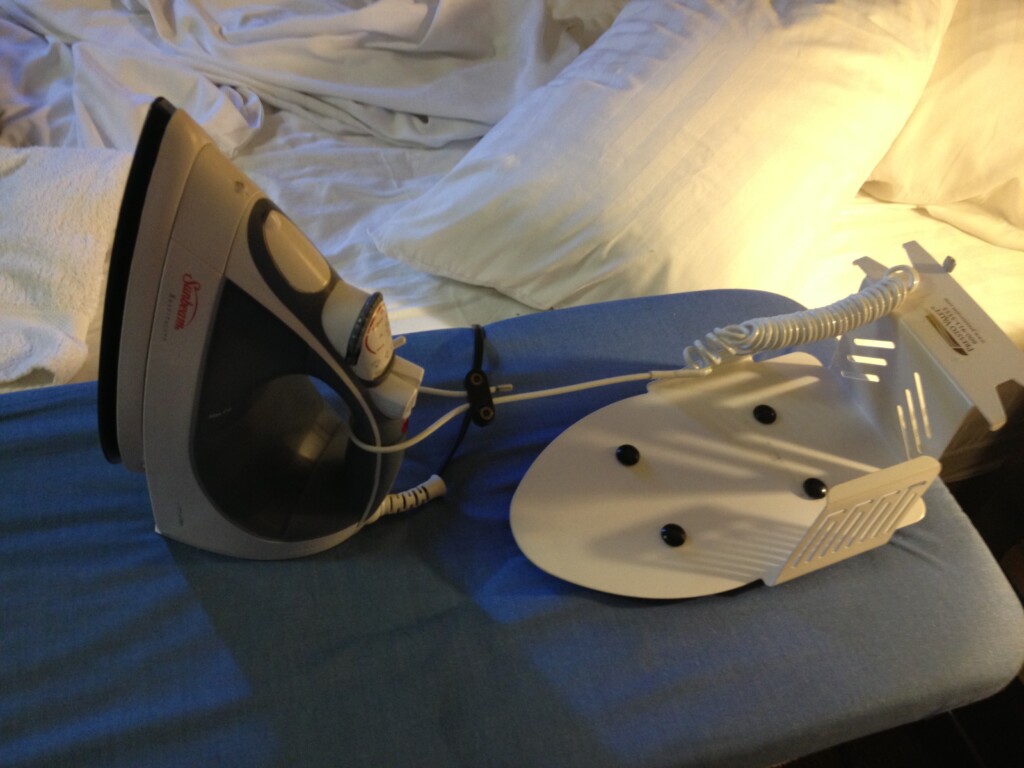 And you just know you’re in a classy joint when they have to nail down the iron to the ironing board. 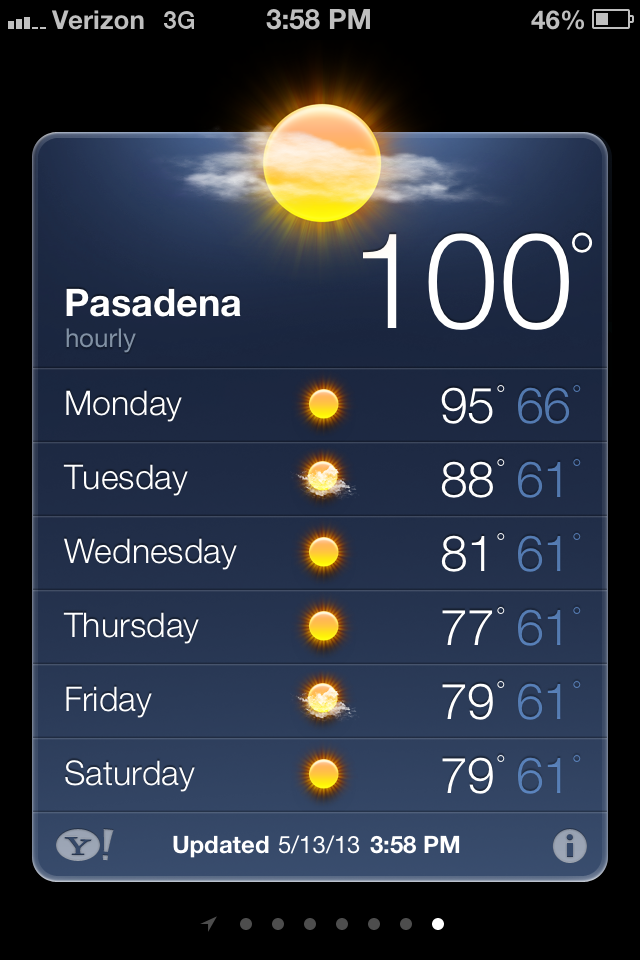 Did I mention it happened to be insanely hot in Pasadena for this time of year? Like almost record-breaking hot. 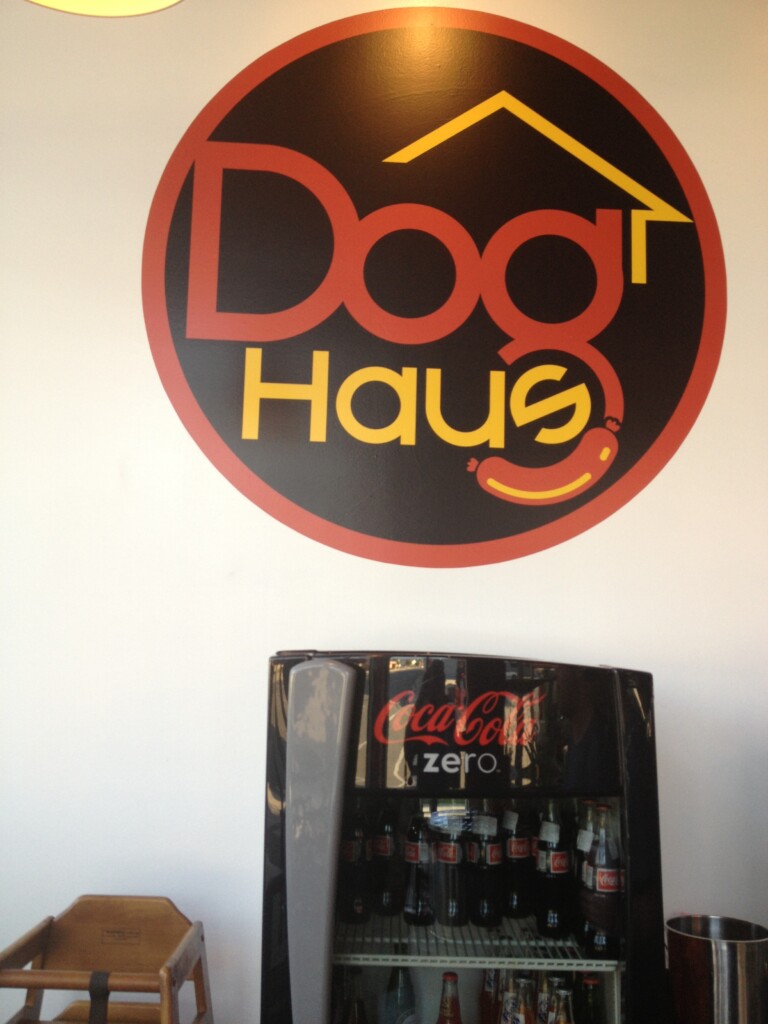 The first thing we needed to do was eat. They fed us nothing on the plane and we hadn’t eaten anything since breakfast way early in the morning. So I browsed UrbanSpoon and saw a place called the Dog Haus. It happened to be right around the corner! 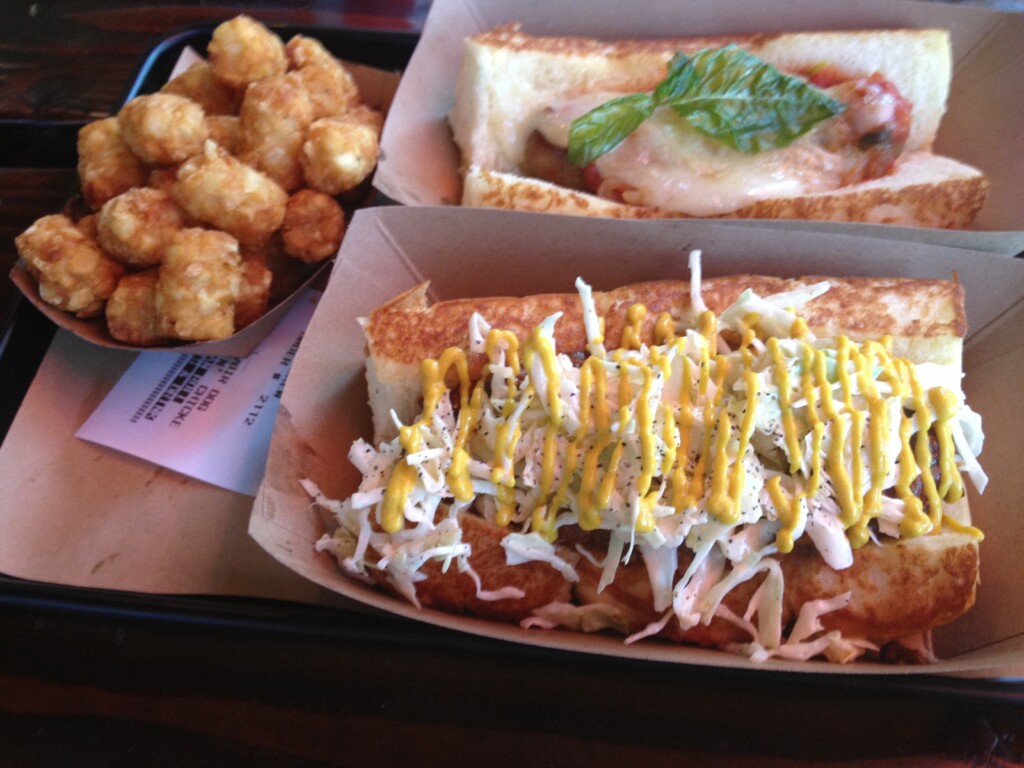 I cannot pass up a good hot dog. Heck, I can’t pass up a bad one either. This place was fanTASTIC. Food was incredible and the menu is crazy. That on the bottom is a Reservoir Dog (haus chili, mustard, and haus slaw), and the other is a Frickin Chicken (chicken sausage, onion, garlic, melted mozzarella, and tomato sauce). I wanted the Sweet Potato Tater Tots but alas they were out of them. The food was equal parts messy and mouth-wateringly delicious. I’d definitely go back. Like a zillion times. 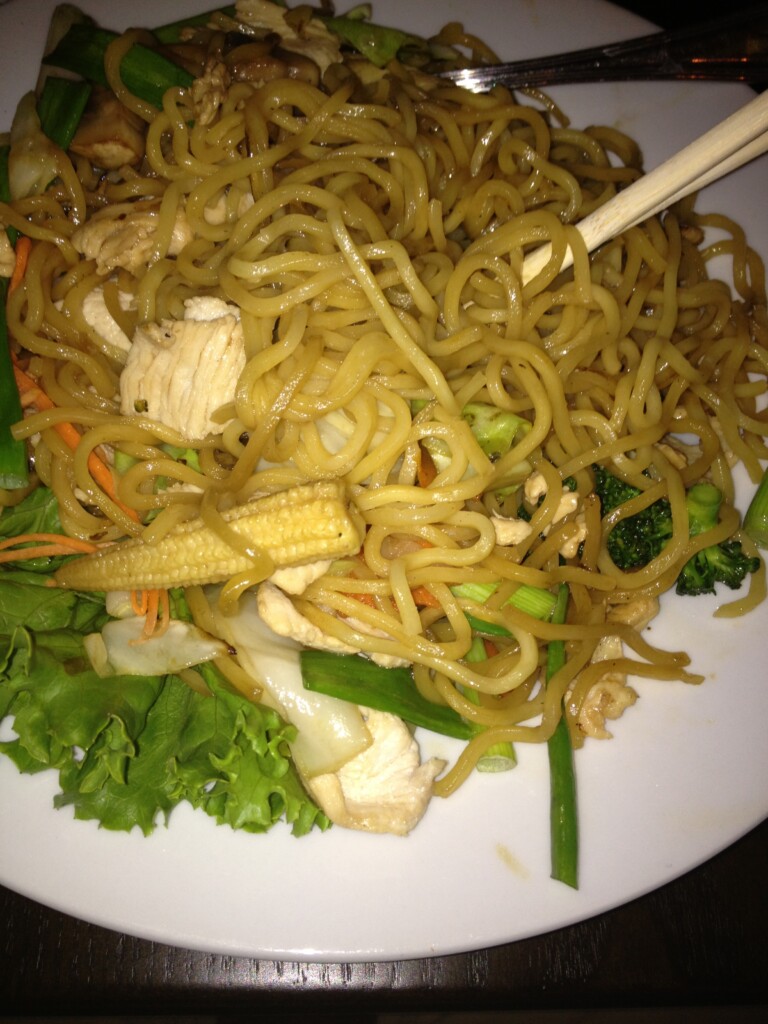 Later on that night we realized we hadn’t really had dinner, since the Dog Haus was more of a late lunch (at 4 p.m.), so we tried out this nearby Noodle House… and man was it good. We hit the restaurant jackpot that day apparently. I went with a basic chicken yakisoba and I could’ve eaten a bathtub full of those noodles! 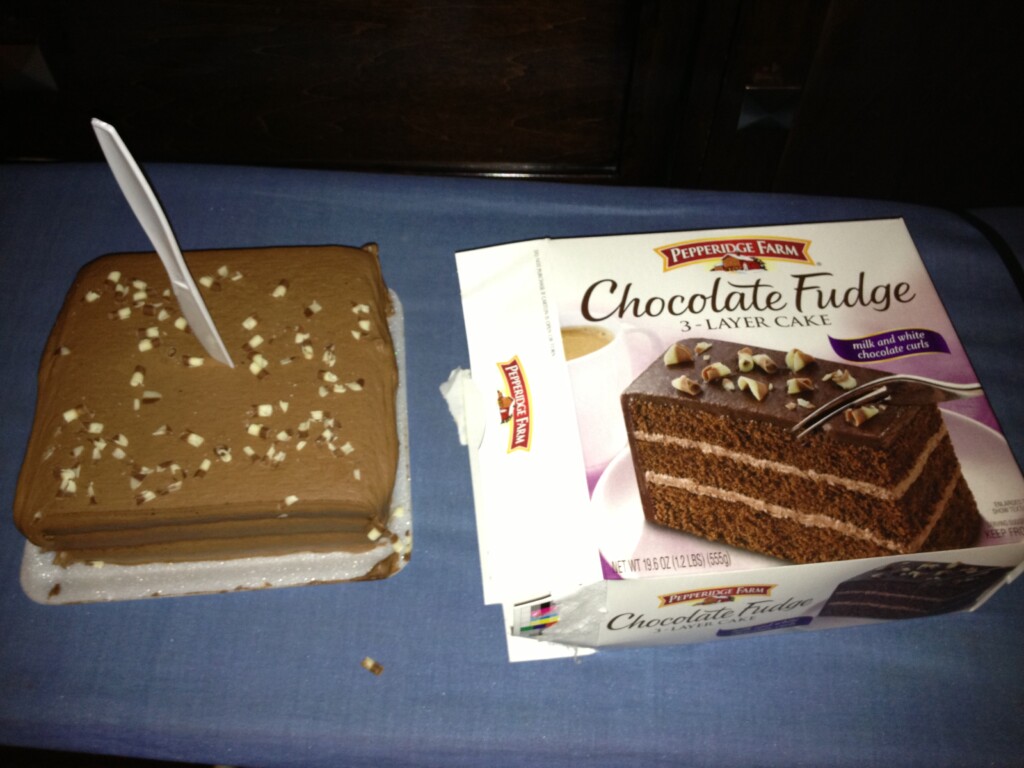 The next day was a long one and I got it in my head that I needed a Pepperidge Farm frozen cake. I hadn’t had one in years. So we drove around, found a Ralph’s, found a cake, went back to hotel and proceeded to devour said cake. 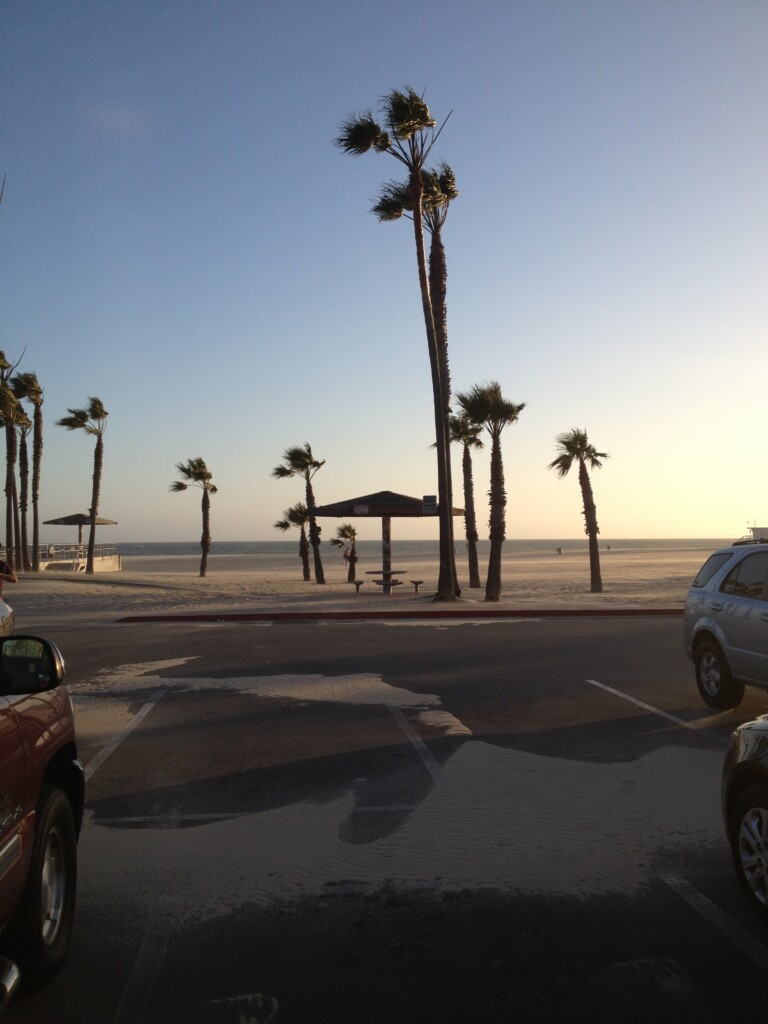 The last day we had some time to kill before hitting the airport that evening, so per my buddy Mel’s suggestion, we hit Venice Beach. It supposedly has a fun boardwalk and is pretty close to the airport. 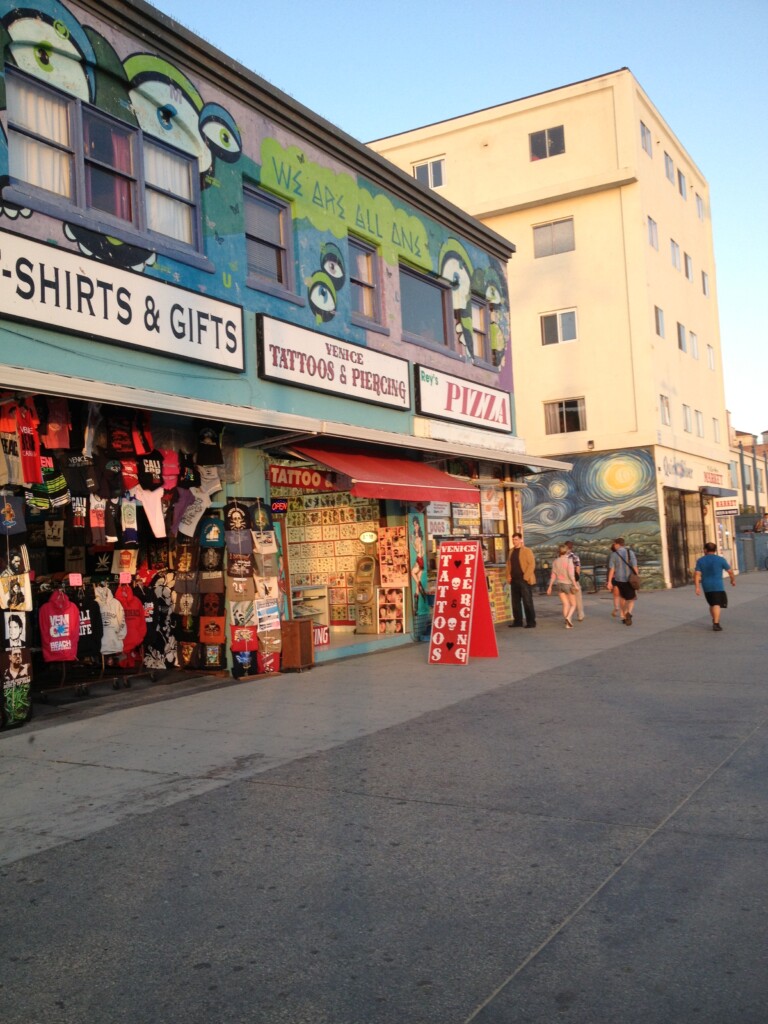 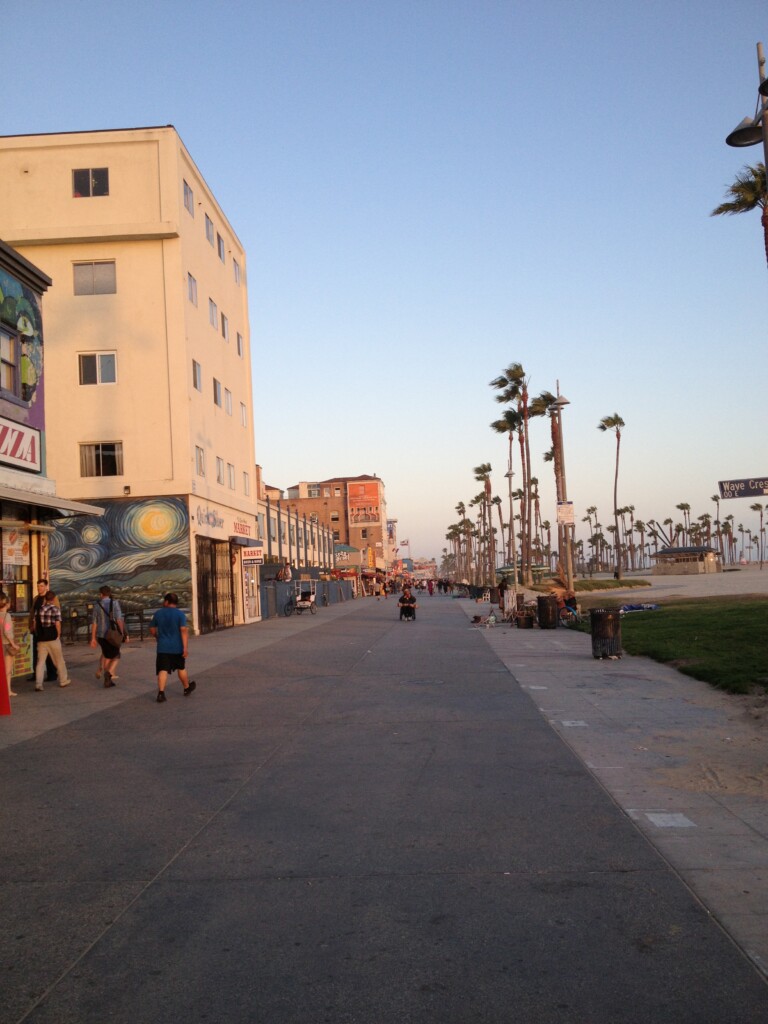 The Boardwalk stretched pretty far. We walked most of it but never made it to the end. Sadly, it was late in the day so most shops were closed or closing. The bulk of the stores, though, were either Tattoo parlors, T-shirt shops, or shops selling… ahem… glass water vaporizers. I can’t imagine why there’d be sooo many stores selling these funny glass shaped vaporizers that don’t even run on electricity! You just use any old cigarette lighter it seems. Fascinating! 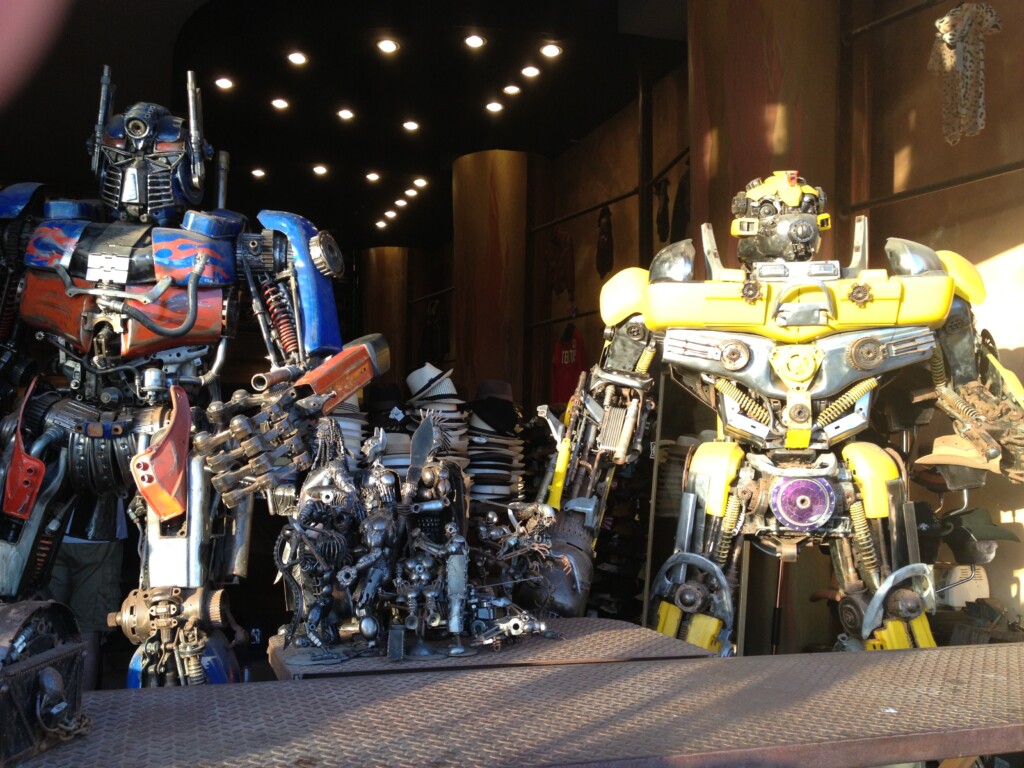 One of the cool stores that was open had a section up front with some artistic sculptures made of scrap metal. Check out the ginormous Optimus Prime and Bumblebee Transformers! These things were HUGE. Like over 10 feet tall. 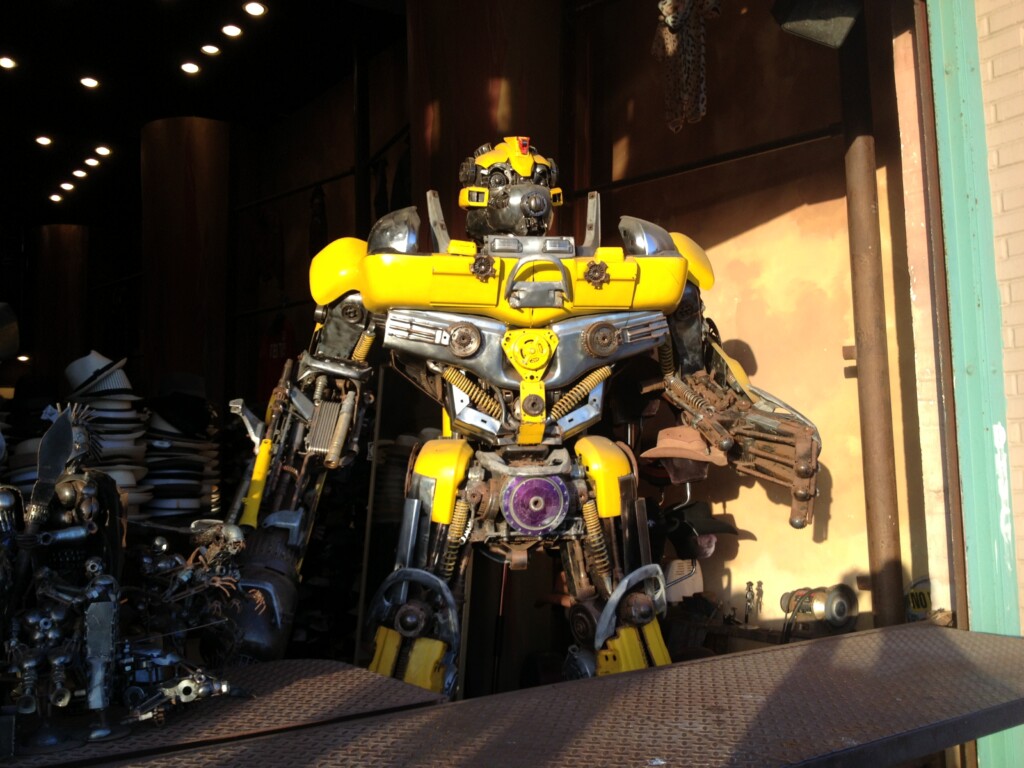 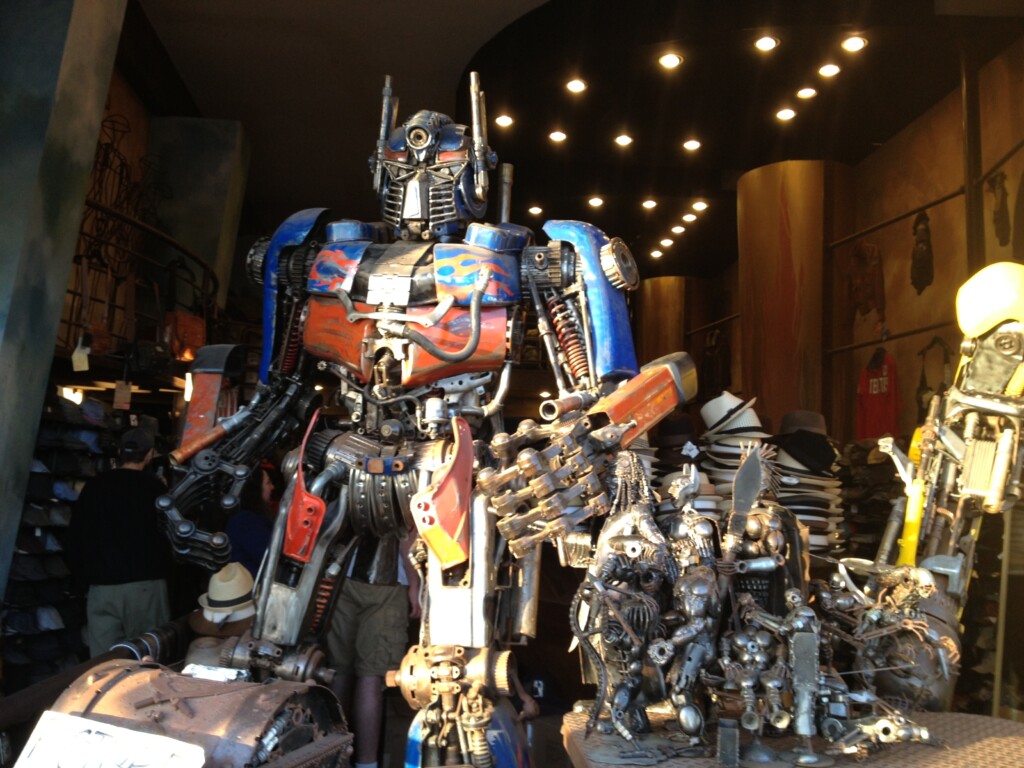 I didn’t ask if they’re for sale even, but they do make smaller metal sculptures of all sorts of pop-culture characters. 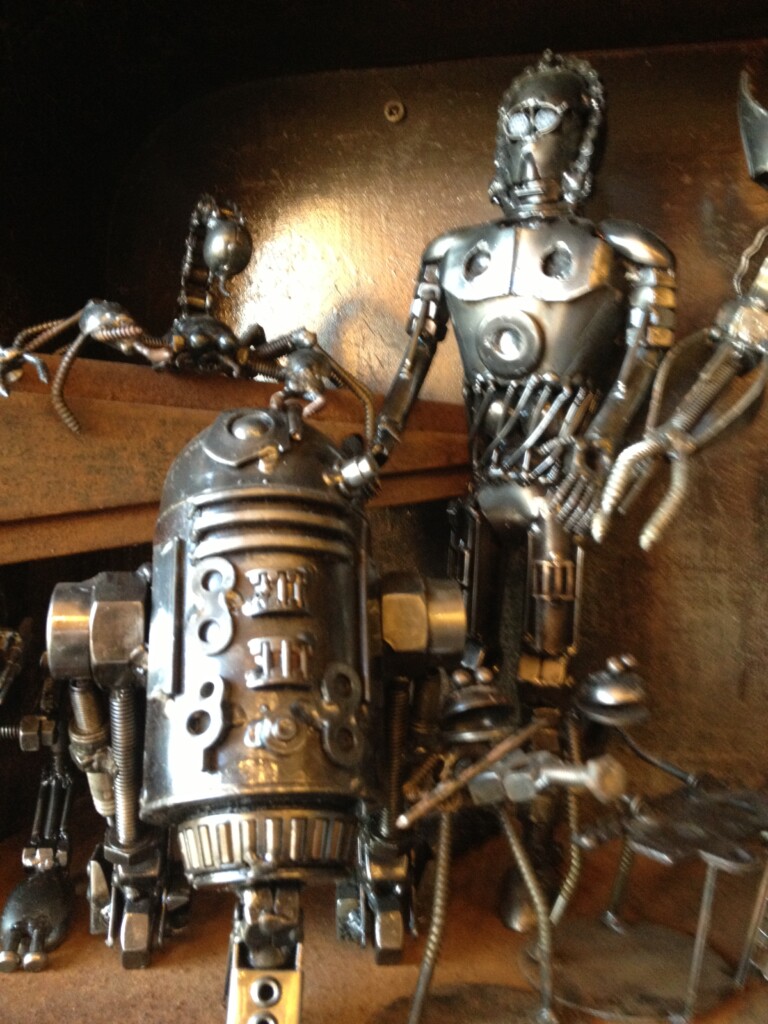 These are the droids I’m looking for! I totally would’ve bought them if I had a few hundred bucks to spare. 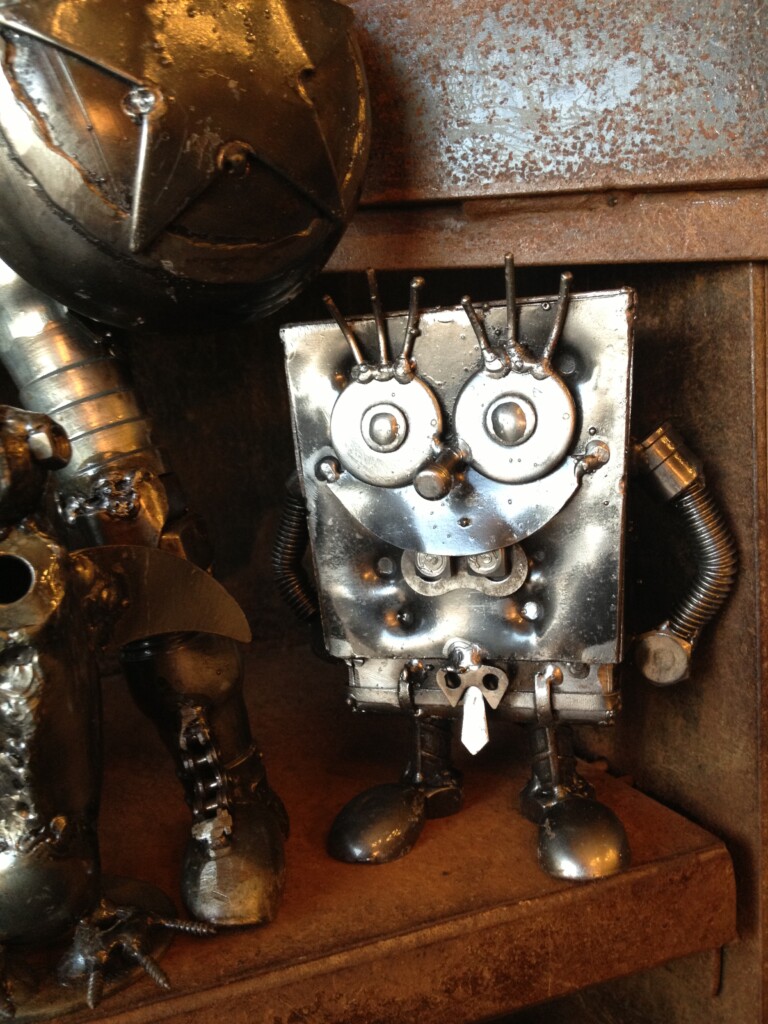 Yep, even SpongeBob has gone metal! 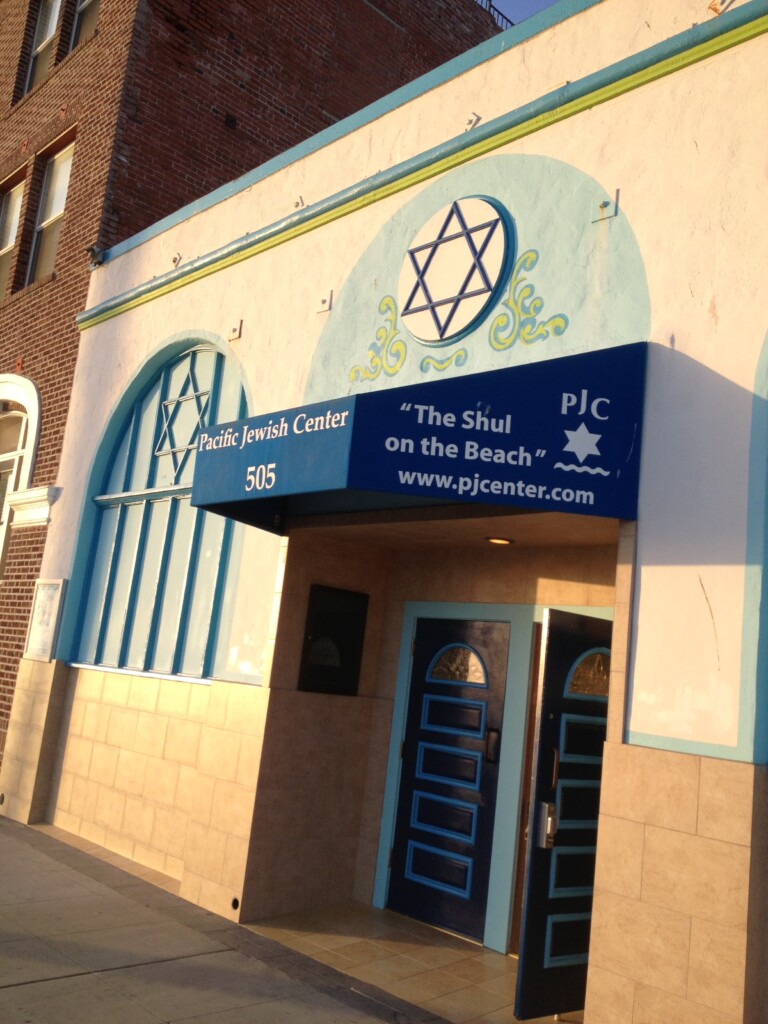 I found it funny that right in the middle of all the…ahem… interesting shops, there was a Jewish Center! The Shul on the Beach! 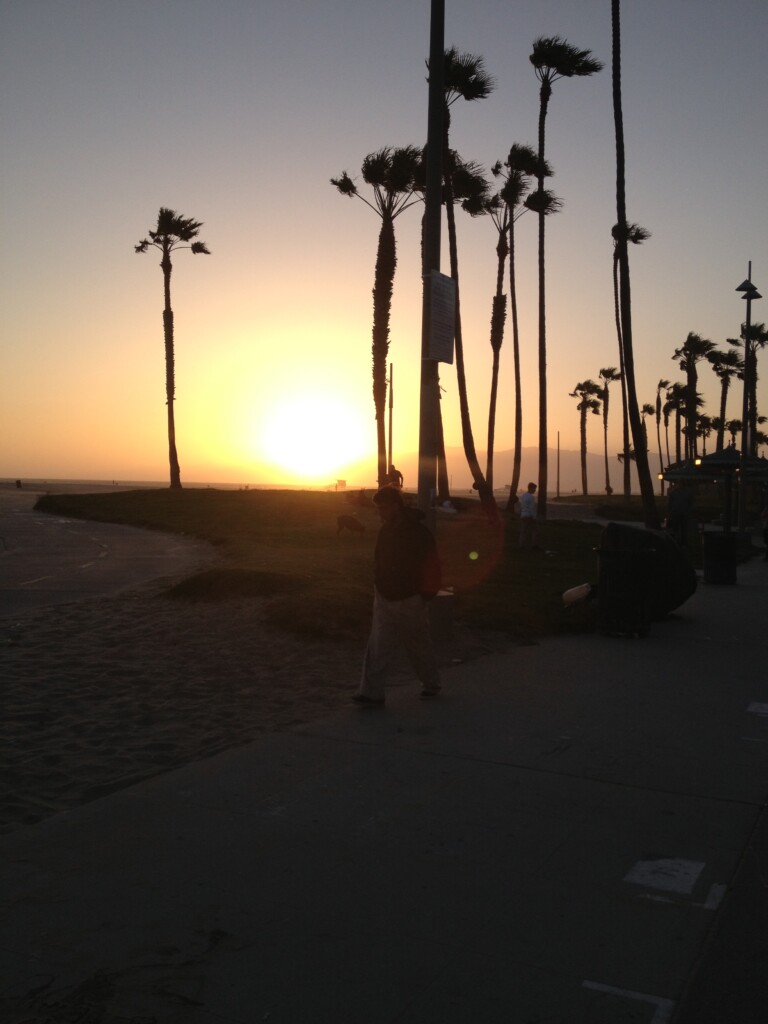 The place was pretty full of kids skateboarding or smoking. Or smoking on their skateboards. Clearly I fit right in…

We made it to the airport way ahead of time and finally made it home. California’s great and all, but I’m just a New York suburb kind of guy. One who’s super happy to be home with his beautiful wife and amazingly awesome kids.