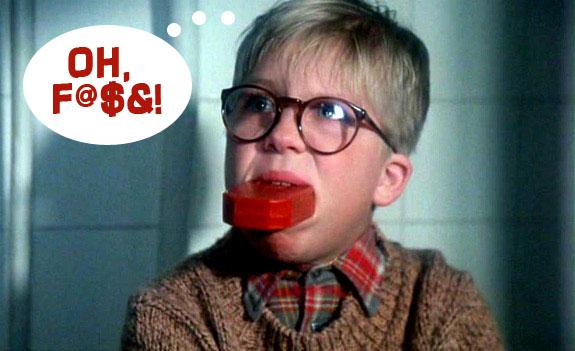 My kids couldn’t be more different. At least when it comes to certain things. Jason is the quiet one who is a stickler for the rules. Ryan, on the other hand, tends to have a motor mouth, and while he doesn’t go around breaking rules left and right, he’s not quite the Hall Monitor that his big brother is.

So last night, my wife gets it in her head that she should teach our kids a few curse words. Before you start gasping and reaching for pitchforks, she’s not going around turning them into little George Carlins. She just wants them to be aware of them in case my kids overhear them, so they’ll know they’re bad words.

As she starts saying the first one, the dreaded “S” word, Jason covers his ears and screams, “Don’t say it! I don’t want to know!” See, curse words are bad, so he doesn’t even want to know what they are.

Ryan, on the other hand, must’ve said, “What is it again?” about 10 times. He kept asking my wife to repeat it. And each time she did, Jason would cover his ears and scream again. It was truly one of the more ridiculous moments in my life.

She then gave them a second curse word. And I was about to interfere, thinking she was going to drop an “F” bomb for some reason. But no, she just told them about the word “Ass.” And again, the same reaction from both kids. Ryan kept trying to say them, so we’d scream at him that he’s not allowed. He even came into our room later that night and mouthed the two words to make sure he had it right.

I looked at my wife. Her eyes widened, and she merely muttered, “What have I done?”

Did you teach your kids curse words so they wouldn’t start saying them?

11 thoughts on “Of Kids and Potty Mouths”