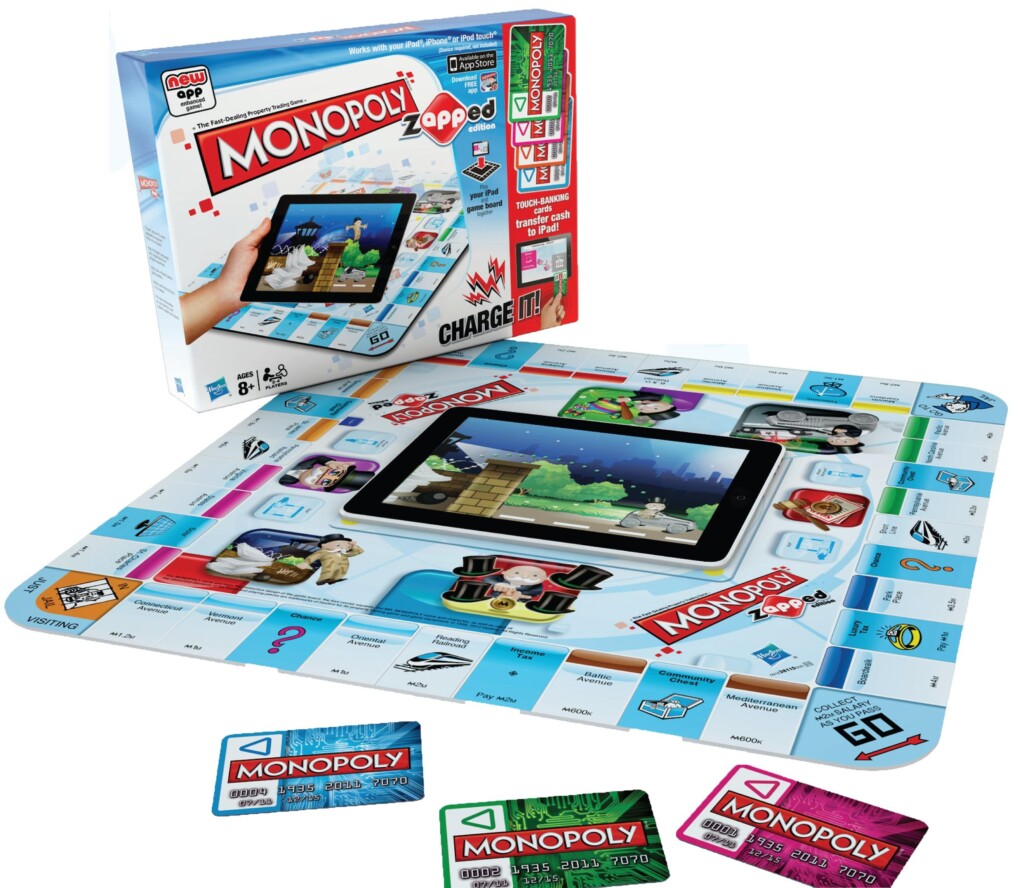 Normally, I’m not a big fan of when companies try to modernize certain games simply by tossing in some simple apps or electronics that really do nothing to enhance the gameplay. I even wrote an article recently about Classic Toys Ruined by Technology. So when I was asked to review Hasbro’s new Monopoly zAPPed Edition, I was more than a little bit skeptical.

My oldest son Jason is a Monopoly addict. We must have five or six different versions in our house (Regular, U-Build-It, Fantastic Four, Hershey’s, Star Wars…). He just loves playing and it’s actually his “Go To” game when Grandma and Grandpa come over to babysit. So how could I not at least give this new app/board game a chance?

And I’m certainly glad I did! Hasbro really put together an entertaining Monopoly version that actually adds to the original. You need to buy the actual board game, but then you download the free Monopoly zAPPed app from the App Store to use on your iPhone or iPad.

The basic game play is exactly as you remember. You roll two dice, move around a board buying up properties, building houses and hotels, and hoping to become the richest player at the end of the game. The game pieces are upgraded to nice lucite-type tokens with the familiar items etched on them. Even the dice are a grayish/clear version, adding a stylized modern touch. The other big change? The prices! Forget worrying about a few hundred dollars for Boardwalk and Park Place. They now go for over 1 Million dollars each! Yep, this Monopoly has prices in the hundred thousand and million dollar ranges.

As you take your turn, you interact with the app on your iPhone or iPad in the center of the board. If you land on a Chance card, for example, you just click the Chance button and it’ll show you an event. The other key difference with the app is that there is no banker and no dollar bills. Instead, every player has their own bank card and they simply tap the touch screen to update their current earnings. No need to add up your money or keep track of things, the app does it for you.

The electronic banker is probably the only pet peeve I have with this edition. Yes, it’s much easier to play with just a credit card and I understand the point of it. But I remember teaching Jason how to add and subtract by using paper money in the original Monopoly a few years ago. Banking skills and handing money back and forth is fun and… sorry to say… .educational. Removing that aspect of the game takes away a key learning experience in my mind. But again, it is fun and a lot easier to not have to think about all that.

The best part of the app, though, are the mini-games. Yep, just like all the Mario Party games my kids love playing on the Wii, this game has its own mini-games. The games are actually a lot of fun, and you either play solo or against the other players. You never know when a mini-game’s going to pop up, either. Usually it’s when you get a card and have to pay or collect money, so how you do in the mini-game affects the outcome.

There’s also tons of animations throughout the game, like a banging gavel if you decide to go the auction route instead of buying a property. My kids really loved the app part of the game. As Jason put it, “I love how you could play a video game while playing the game.” It’s a really nice alternative to the original game and the interactivity with the app truly modernizes it, while still keeping the core board game intact. It does work with the iPhone, although it’s a lot harder to use. If you have an iPad, definitely use that and you won’t be Sorry. Now that’s a different game all together.. 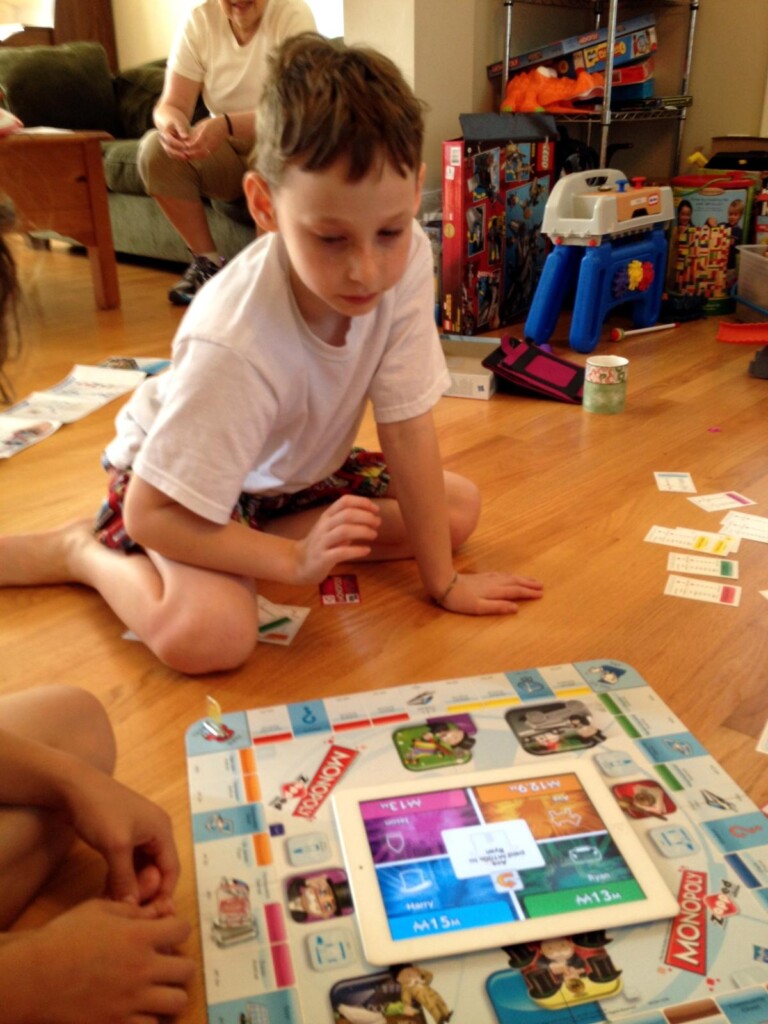 Monopoly zAPPed Edition is available now at stores everywhere, with a retail price of $29.99.

I received the featured product in exchange for my honest opinion. The thoughts and opinions expressed in this post are my own and in no way were influenced by the company providing the product.

7 thoughts on “Review: Monopoly zAPPed Edition – Don’t Be a Hater”