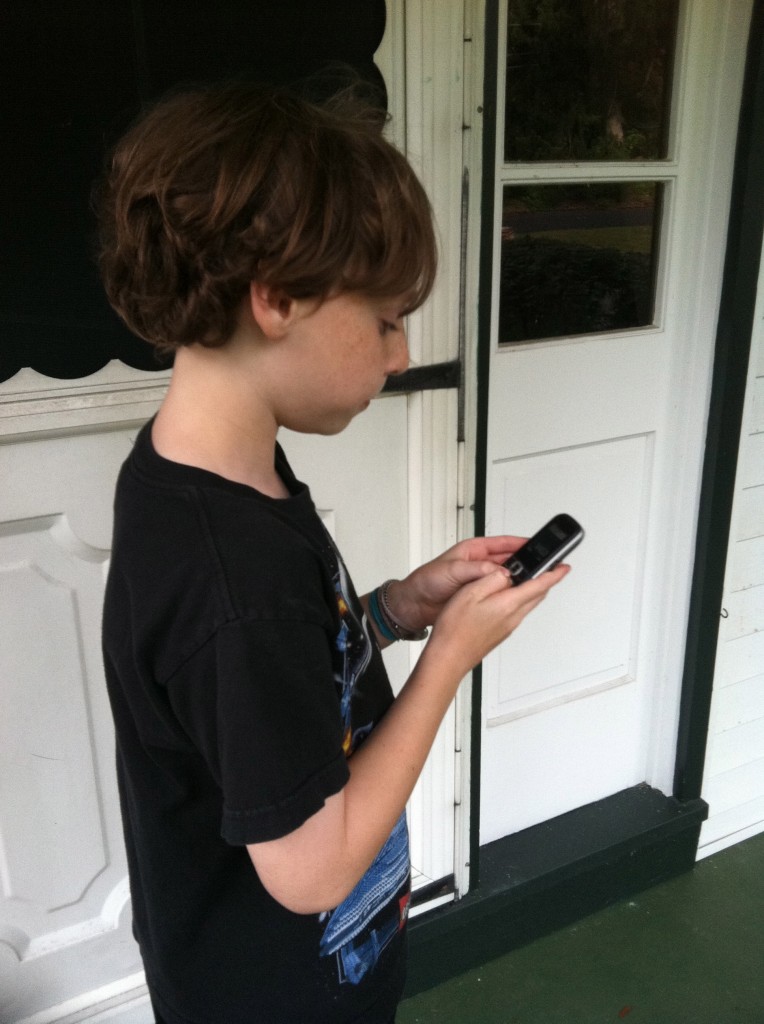 Jason’s had his own cell phone for about a month now. As I originally shared with you, we’ve always wanted him to have one solely because he has severe food allergies. So it’s a safety issue.

Thankfully, he hasn’t had to use it in an emergency yet, and hopefully never will! But it has been great seeing how easy and inexpensive the Walmart Family Mobile plan is. Considering I’ve been having some major “disagreements” with my current Verizon Wireless plan, Walmart’s plan is looking better and better by the second. And it looked pretty darn good from the start!

Heck, get a load of this: The ridiculous, unnecessary and insulting fees alone that I’m stuck paying on my current plan with Verizon… yeah, the stupid FEES (not the actual price of the plan) are actually more than it costs for just the Walmart Family Plan itself. Think about that!

At just $39.98 a month you can get unlimited minutes, texts and Web usage for 1 phone. As far as unlimited plans go, Walmart’s truly is unlimited. Each additional phone is $5 less per month, so only $34.98 per month. And if you don’t even want Web usage, you can knock off another $10 a month. I currently pay well over $100 for just two cell phones and I certainly don’t have unlimited Web usage.

That’s a savings of at least $25 a month, though probably lots more. Heck, extrapolate that out over a year and I could save at least $300 just by using Walmart’s Family Plan. I could buy a Wii U for that price! Or in a few months, make that an Xbox One! (Hint to my lovely wife…)

But back to Jason. He’s really enjoyed having his own cell phone. Granted he uses it most often to call Allie on the house phone when he’s in the same room as her. Half the time she falls for it too.

Now while I’m sure he’d love to have an iPhone, that’s more than just a bit of an overkill, considering this phone is just for emergencies. considering he can text and make calls from his Alcatel 506A, he really shouldn’t complain. That’s as good (if not better) than the first cell phone I ever had. And I was married when I got my first one! This kid’s just starting the 5th Grade.

The Alcatel 506A is really like having an extra set of eyes on Jason too, which as every parent knows, is never enough. We can only stay on top of him for so long. Yeah, Allie and I know that Jason needs to take on more responsibility and be more independent as he gets older. And with a cell phone, we can give him that extra little bit of freedom, knowing that he’s just a phone call away.

Besides the cheap wireless plan that we’re on with Walmart and the awesome unlimited plans that they offer, what by far is the best thing going is the fact that there are no contracts to sign. None. You sign up, activate your phone and just pay the low monthly fee, which you can easily do with a quick phone call or through the online account management and information site.

I’m real glad I got this opportunity to try out the Walmart Family Plan thanks to the #cbias program I’m participating in. It’s no joke that #FamilyMobileSaves and the bigger your family, the more the savings. Now I have a feeling we may need to get Ryan a phone one of these days…

Are you happy with your current mobile plan?

15 thoughts on “One Month Later: Jason’s First Cell Phone and the Value of a Cheap Wireless Plan”