Ryan cracks me up. Constantly. This kid is such a well, such a boy when it comes to playing. Not the rough-and-tumble sports kind of boy. But the I-can-turn-anything-on-the-planet-into-a-fun-game kind of boy.

So last night we were hanging out in the basement, and Ryan took his ImageNext sets and began setting up one mega game. He loves using these sets, but rarely ever uses the ImageNext figures that come with it. This time around, he was using his big ol’ collection of Marvel Superhero Squad figures. Yeah, this is one proud poppa!

It probably took him an hour or so to set everyone up so carefully. And yes, he spent time carefully placing everyone in various spots, even hidden locations.

I love, love, love that ImagiNext Batcave toy. It is too awesome cool. And I love the fact that Ryan’s using Marvel superheroes, rather than the Batman ones that came with it. Marvel FTW!

First stop on the tour is the space shuttle. I don’t think he even meant to do this (or maybe he did) but the main characters I see are all big armor-wearing types (yes that’s even a silver armored Spider-Man), so they can surely survive the dangers of space travel! And we all know Vision doesn’t need to breathe, so he’s fine. 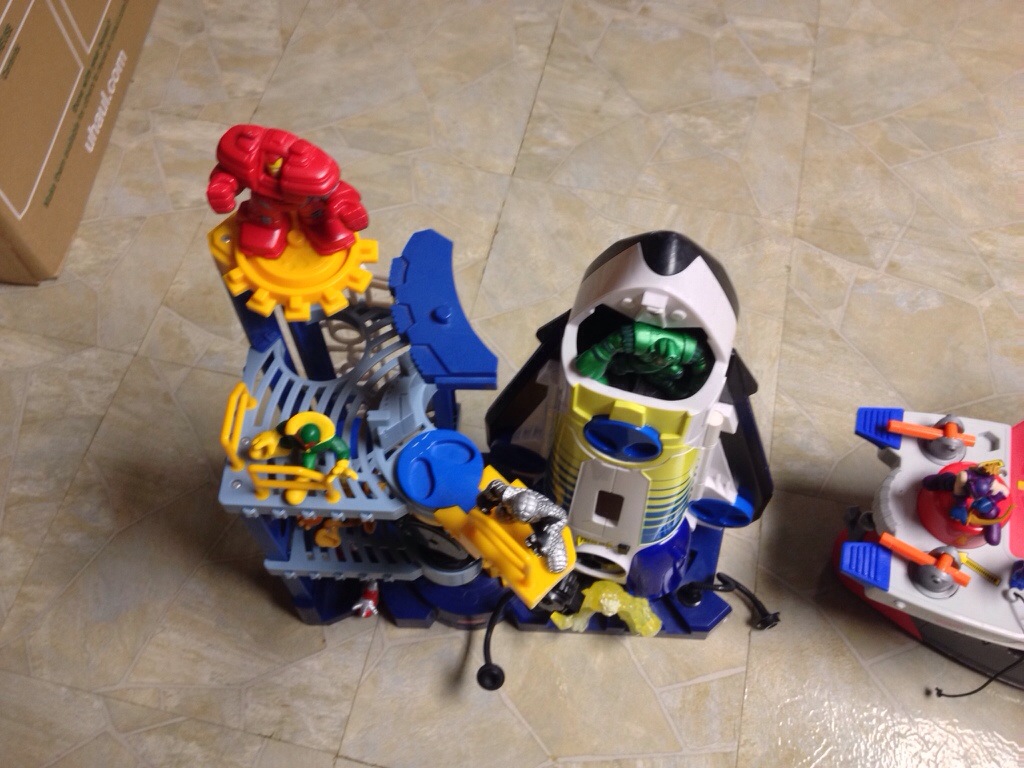 Next up is the ImagiNext Aircraft Carrier. Jason’s so excited here, he’s moving at super speed! 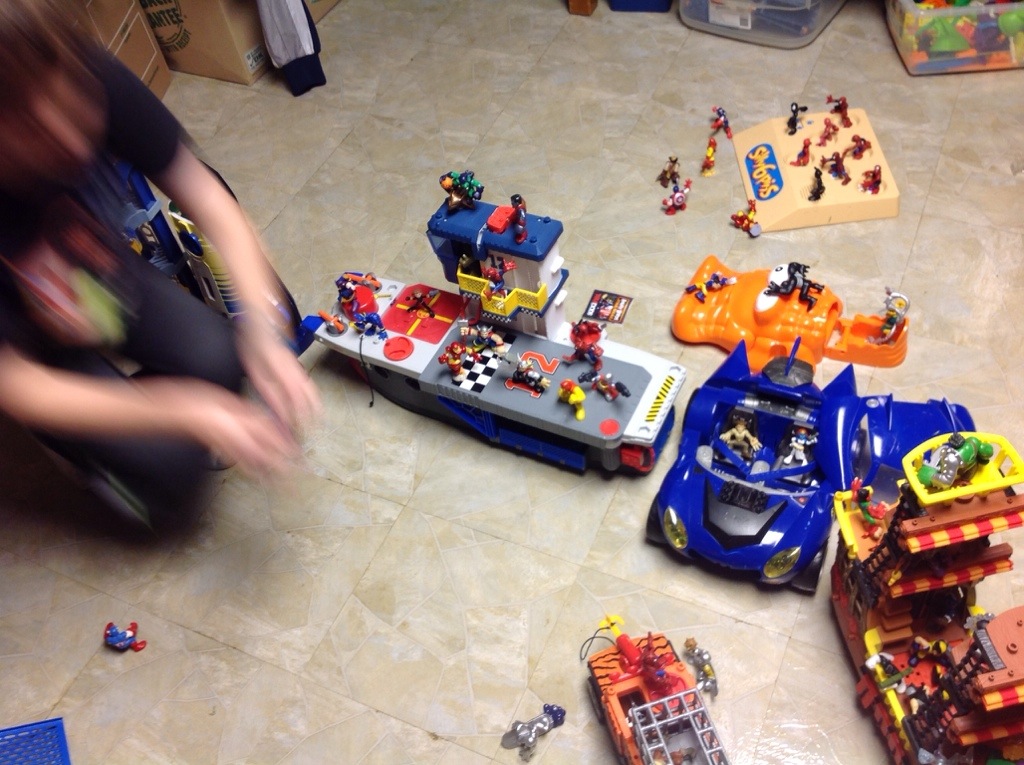 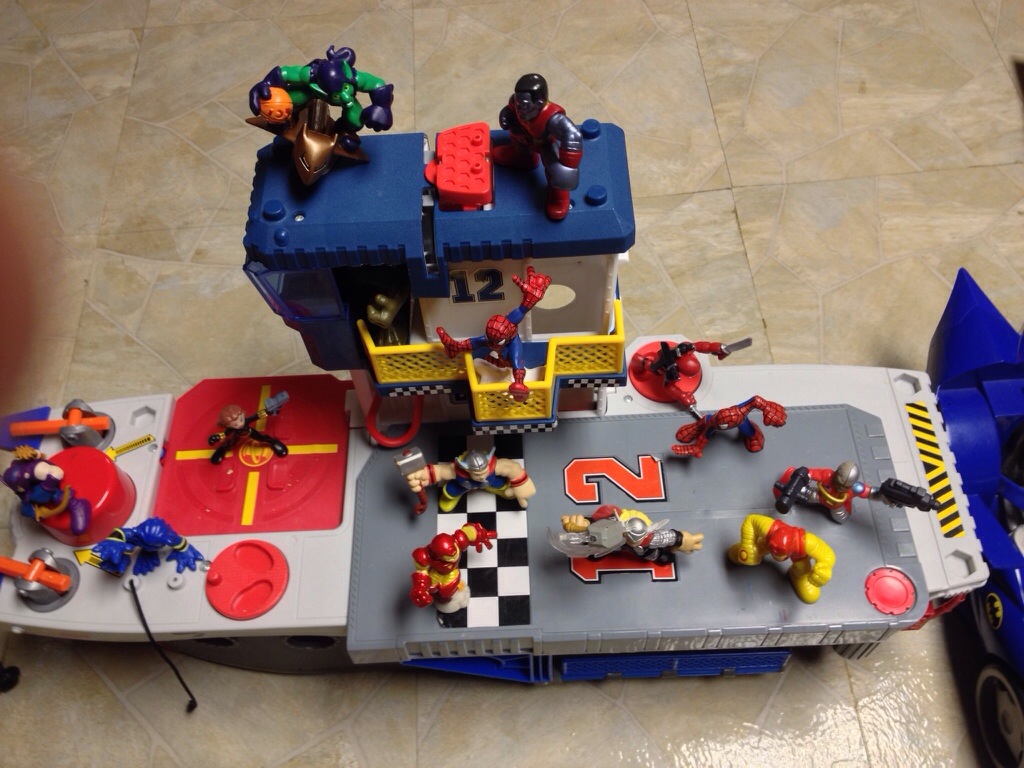 Once you make it past this tough level (hey, it’s got Thor, he’s one of the Big Guns!), you head over to the wild seas with this Pirate Ship. That must be some seriously strong wood up in the Crow’s Nest if it can support the likes of the Hulk! 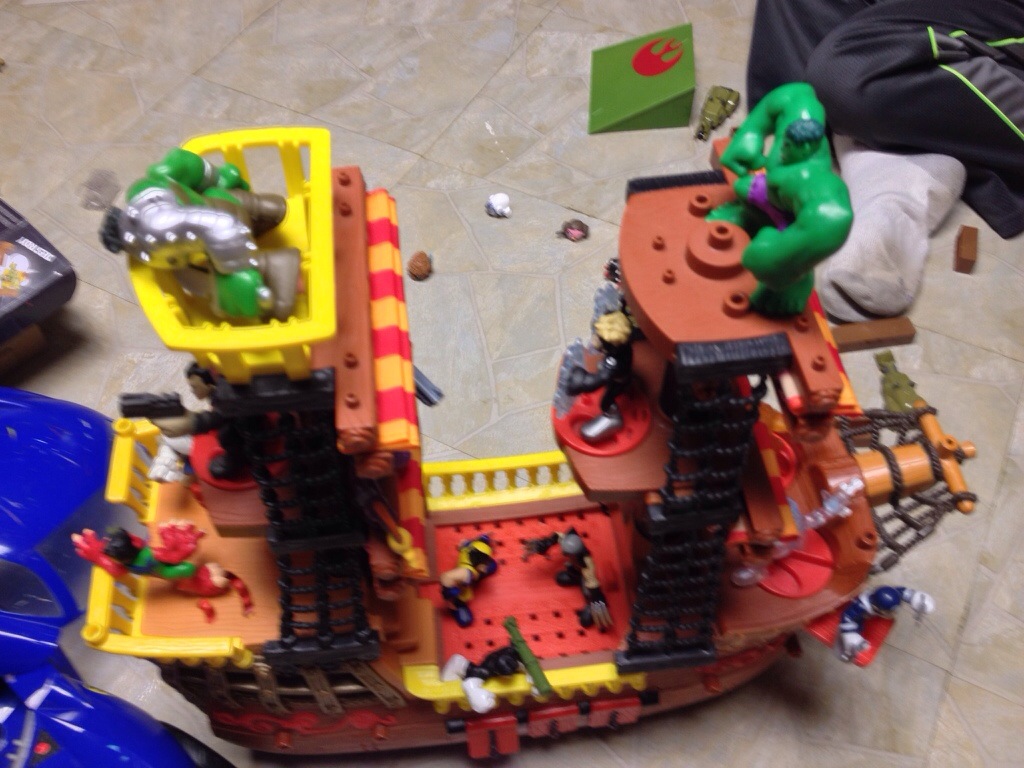 Time to Bungle in the Jungle! Of course vultures live in the jungle, you didn’t know that? Oh, and look who’s hanging in the giant web there. “That’s Baby Spider-Man,” reveals Ryan. 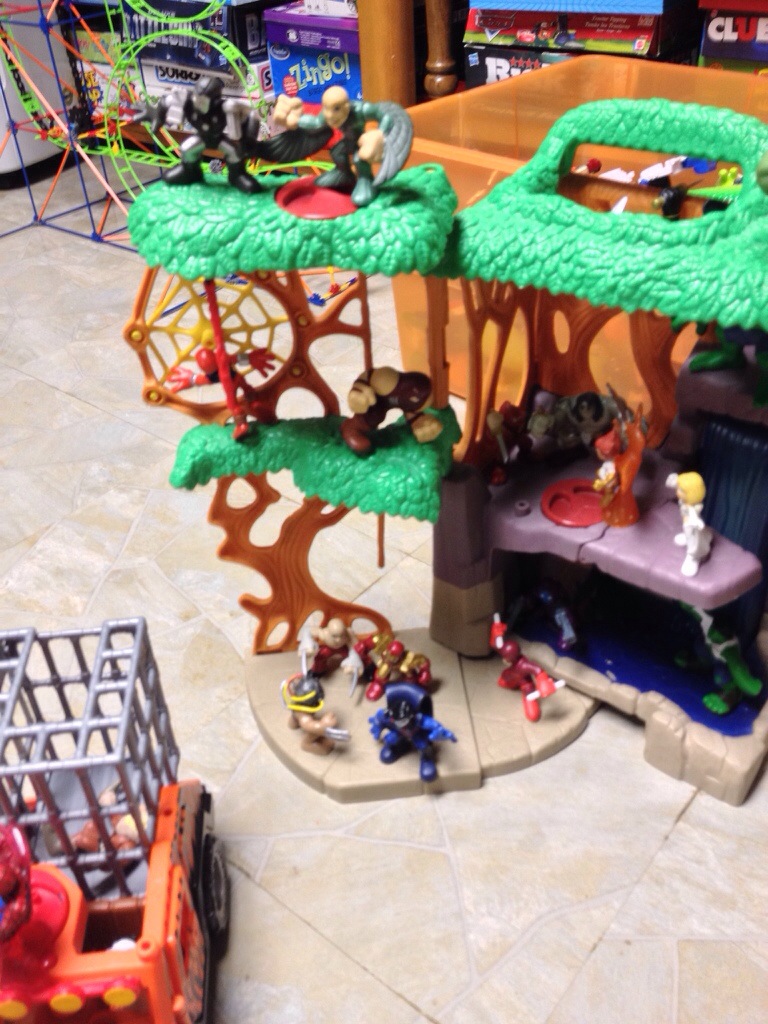 Almost to the last level! We move on to the super awesome Batcave! But the Caped Crusader is nowhere to be found. Looks like he and his DC Comics cohorts were all run out of town by Wolverine and his posse! 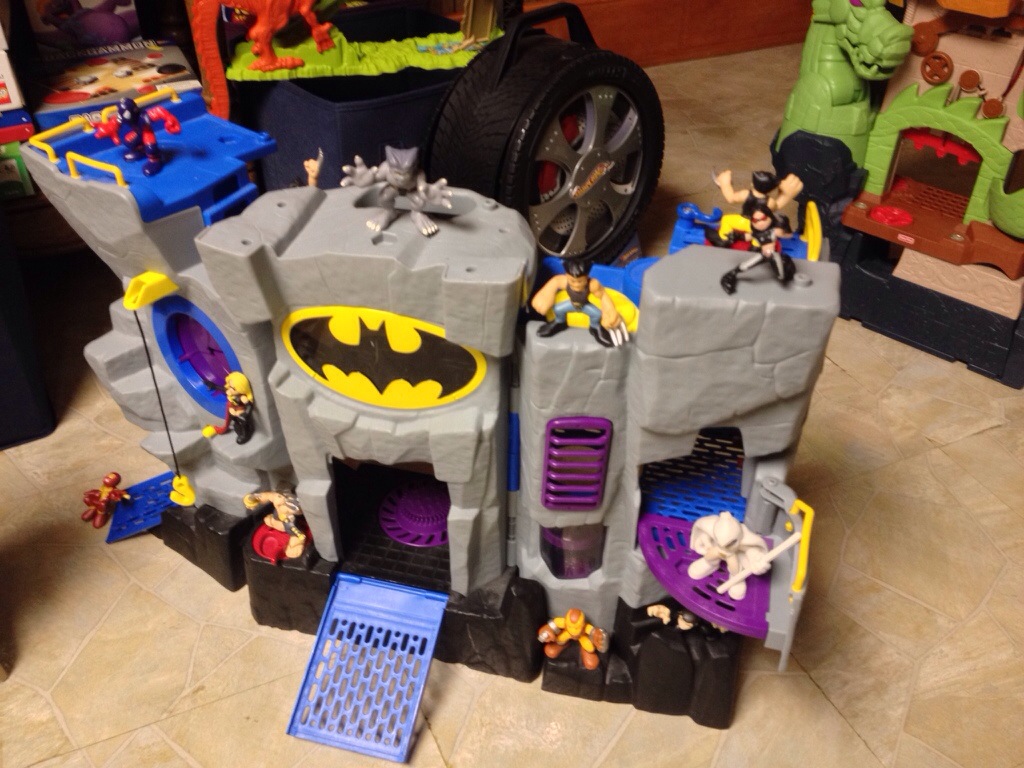 The last stop is the big ol’ castle. Ryan’s putting the final Bosses on there, including one of the scariest and deadliest Marvel villains ever! No, not Dr. Doom, but… Ultron! 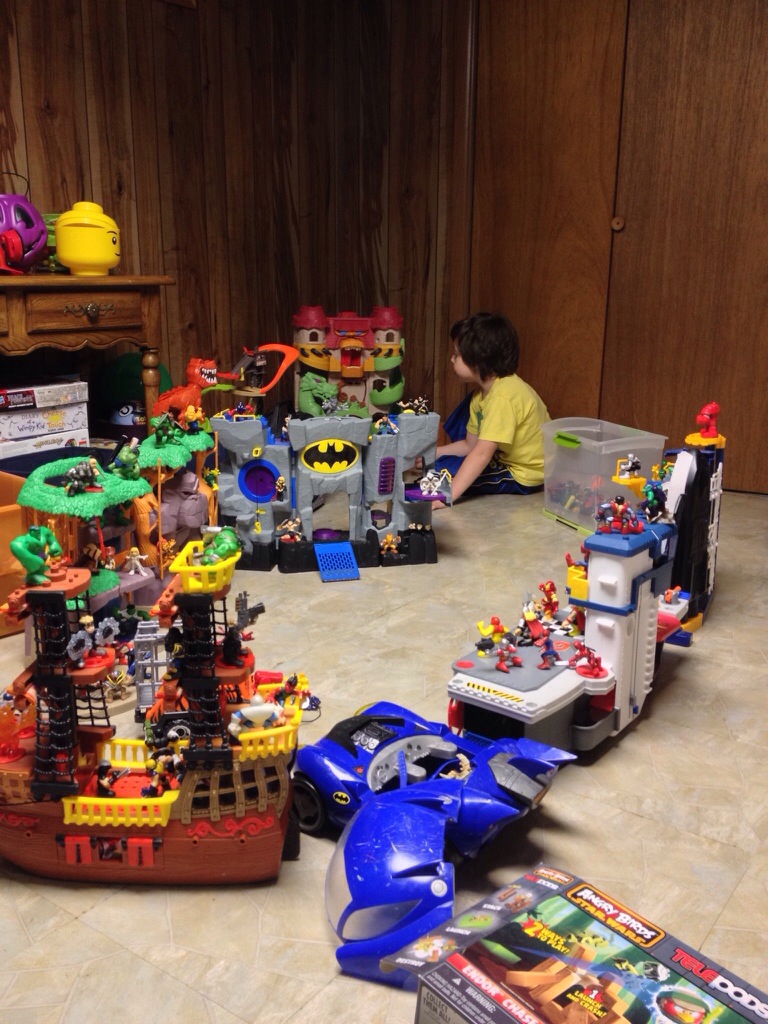 If you’re curious about Ryan’s game and what happens on each level, we’ve put together a video tour of his Marvel City. You’ll see a few hidden levels, learn who’s in that big Batmobile above, and even find out what role Captain America plays in all of this. And let me just tell you, I’m not too happy about the answer to that last part…

Ryan loved his city and now wants to make a trailer for the game itself. This should be interesting.

Anyone want to play Ryan’s game?