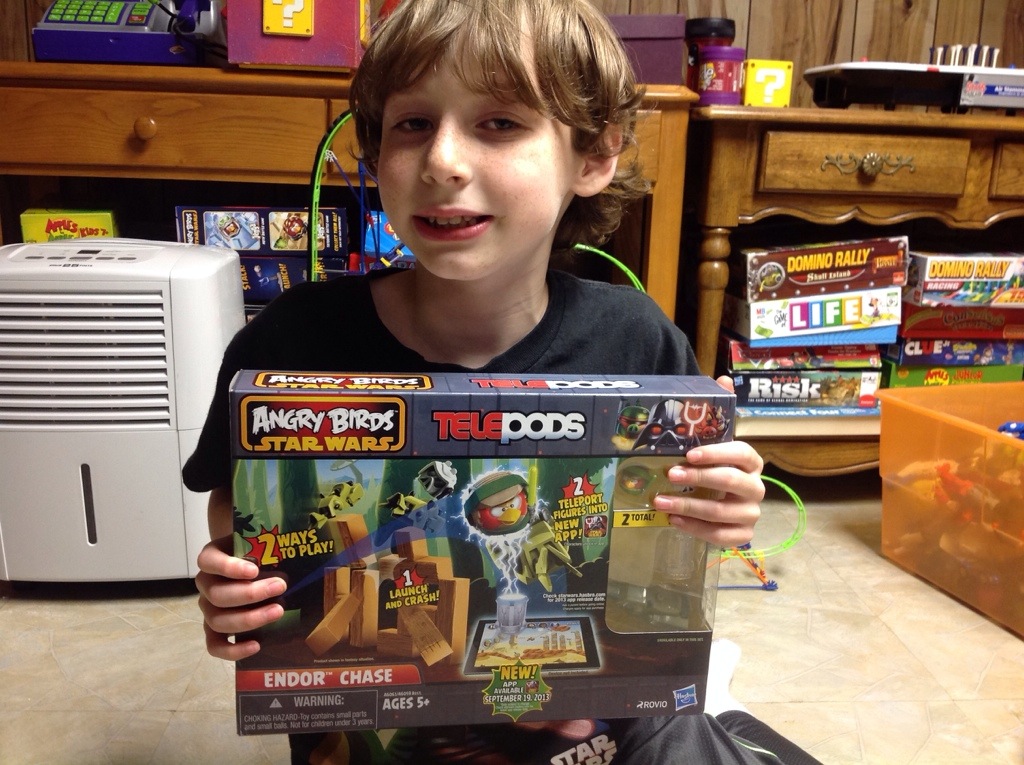 Yeah, when the Angry Birds Star Wars app first came to a galaxy near, near home, I jumped all over it. And loved it to pieces. The merchandise, the characters, the game. It’s all fantastically awesome.  I even did a review of a few of Hasbro’s Angry Birds Star Wars games in the past. Tons of fun games these are!

Well, now they’ve got a new addition to the line called Telepods. These clever toys let you play Angry Birds Star Wars in two different ways! First up, you can play with the regular build-em-up-and-knock-em-down sets. See how long it takes for you to destroy the enemy! But the Telepods part is what’s really cool. Using any smart device with a front-facing camera (like an iPad, iPhone, Android, etc.), you can “teleport” your physical characters right into the app itself!

That means you can play the new Angry Birds Star Wars II app using your own characters. And just like regular Angry Birds, each character has a different power! Hasbro sent me their Endor Chase set along with a blister pack containing Princess Leia and R2-D2 to test out. I also just happened to attend a Hasbro Pre-NYCC event this week, where I scored a Jedi vs. Sith pack of telepods too! So we had a whole bunch of characters to play with!

After feasting on the figures themselves, we set up the Endor Chase scene! It comes with three speeder bikes, one of which actually moves when you pull back on it. Jason and I carefully set up the level (meaning Jason tried five times and kept knocking them down so I stepped in and got it lined up) and then prepared to destroy it! 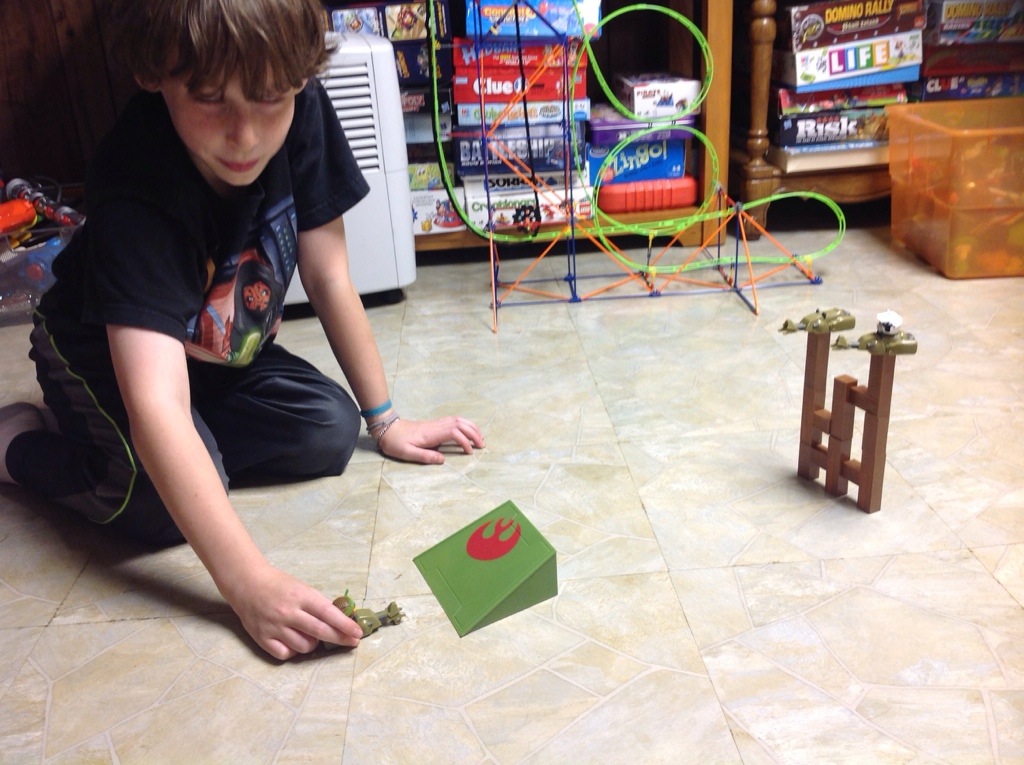 Jason had a bit of trouble even getting the bike on the ramp! Eventually he got the hang of it (kind of) as you’ll see in this high-octane video:

Oddly enough, Ryan tried it once. And on his very first try, not only hit the ramp head on, but knocked more than half the blocks down. Beginner’s luck.

Just like the other awesome Angry Birds Star Wars sets from Hasbro, this one is a blast. I actually like it better than the catapult-type ones because it’s just so much fun zipping that Speeder Bike up the ramp!

But the insanely cool part is how easy and fun it is to teleport your characters into the game itself! Jason LOVED grasbbing the little telepod and placing it on my iPad to “suck” in the characters. He kept scanning new ones in and then playing new levels just to see what each character could do. He’s always loved the Angry Birds games, especially the first Star Wars one. But after yesterday, he said he REALLY LOVES this game.

We had so much fun popping in new characters and then choosing them for various levels. Yoda is a hoot as his special ability lets him bounce all over the place like a little caffeinated monkey. And General Grievous is pretty sick with his four spinning lightsabers!

By now, you’d think the Angry Birds fad would’ve pretty much run its course. A cute game that outlasted its excitement. But far from it! Hasbro and Rovio continue to innovate and keep the Angry Birds Star Wars line super fresh! Heck, I can’t stand the Star Wars prequels at all, but playing as any of those characters in the app or with the game is just too much fun to ruin my Classic Star Wars pride!

Giveaway ends on October 23, 2013 at 11:59 p.m. The 1 winner will be chosen at random and announced on this site. Giveaway is open only to legal residents of the fifty (50) United States (including District of Columbia), who are at least eighteen (18) years old at the time of entry. The 1 Winner will be notified by email and has 48 hours to respond or a new winner will be chosen.

I received the featured products in exchange for my honest opinions. The thoughts and opinions expressed in this post are my own and in no way were influenced by the company providing the products.