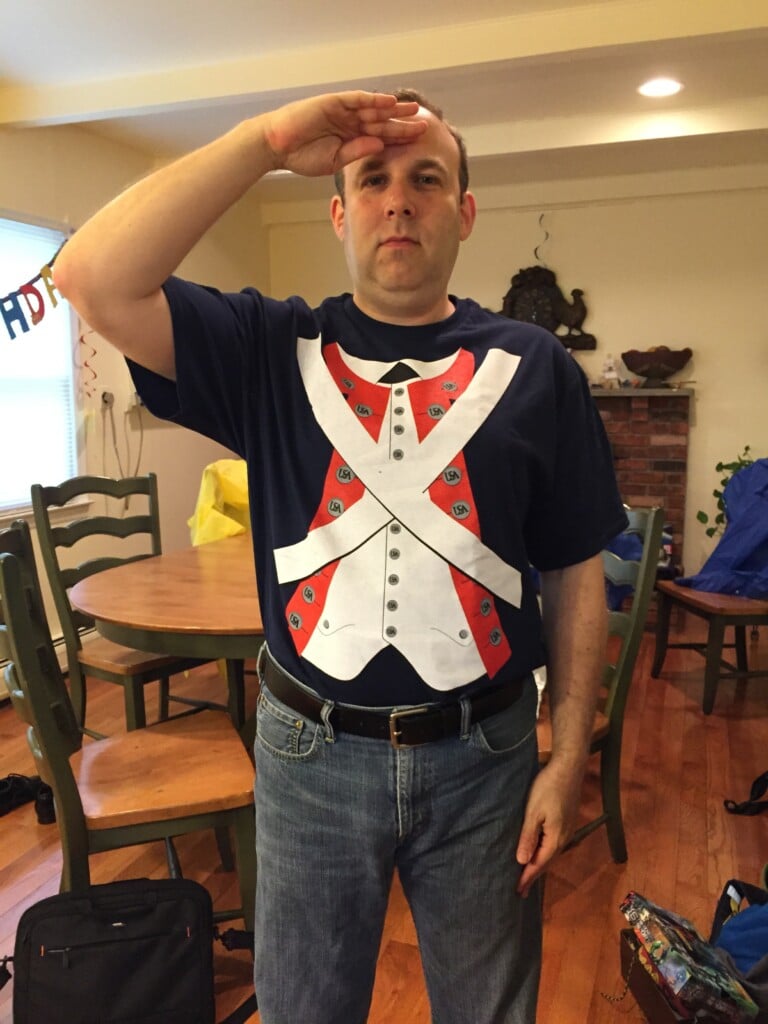 Last week we took a mini vacation down to Williamsburg, Virginia. We went with Allie’s cousin Ivy (the same wacky group we vacationed in Niagara Falls with earlier this year) and had a blast at Busch Gardens, Water Country and Colonial Williamsburg.

Despite the crazy traffic right outside Washington, D.C., (Seriously, can they do something about that? It’s worse than NYC and San Francisco combined!), we really enjoyed ourselves. The weather cooperated fairly well, though it was so insanely humid, even my sweat was sweating.

I went to Colonial Williamsburg when I was a kid and have real fond memories of the place. The one thing that really stuck out in my mind was this little toy gun my parents bought for me. It was wooden, with a big red handle. You pull the handle back and push it in fast to pop out the cork (attached via a string). I loved that thing and totally forgot about it until I shared that info with everyone the night before we hit Colonial Williamsburg. I was 1000% determined to buy that gun if I saw it again, as unlikely as that’d be. (Foreshadowing alert!)

We spent July 4th itself at Colonial Williamsburg, so it was extra awesome. Let me walk you through some of the highlights of our trip! 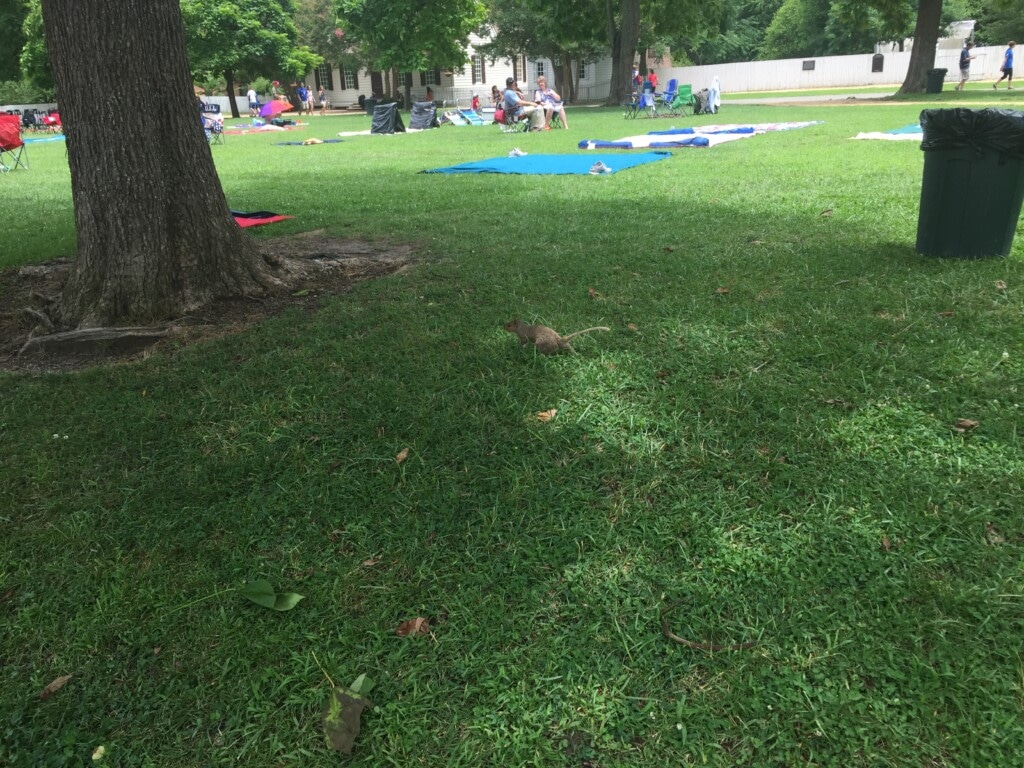 We saw this squirrel (I think it was a squirrel!) running around the grounds. It apparently is way too used to people because it practically walked right up to me to take a selfie! But what’s up with that rat-like tail??? 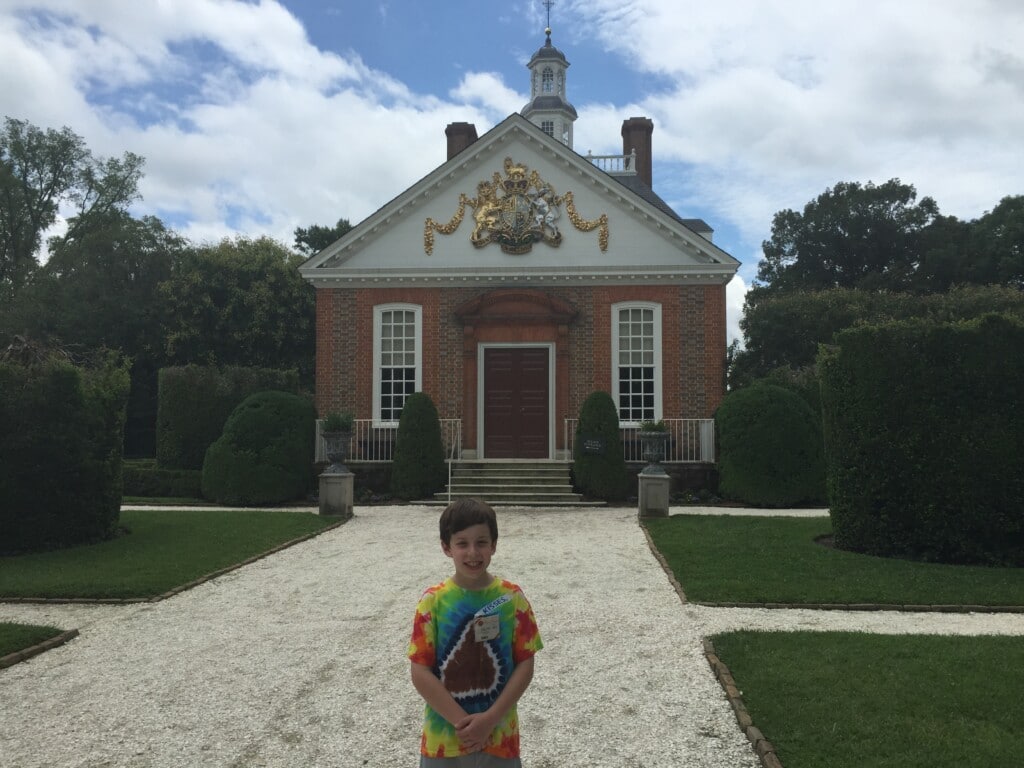 One of our first stops was at the Governor’s Palace. This is the back door by the way, so you can only imagine how huge this place is. Gorgeous gardens too. 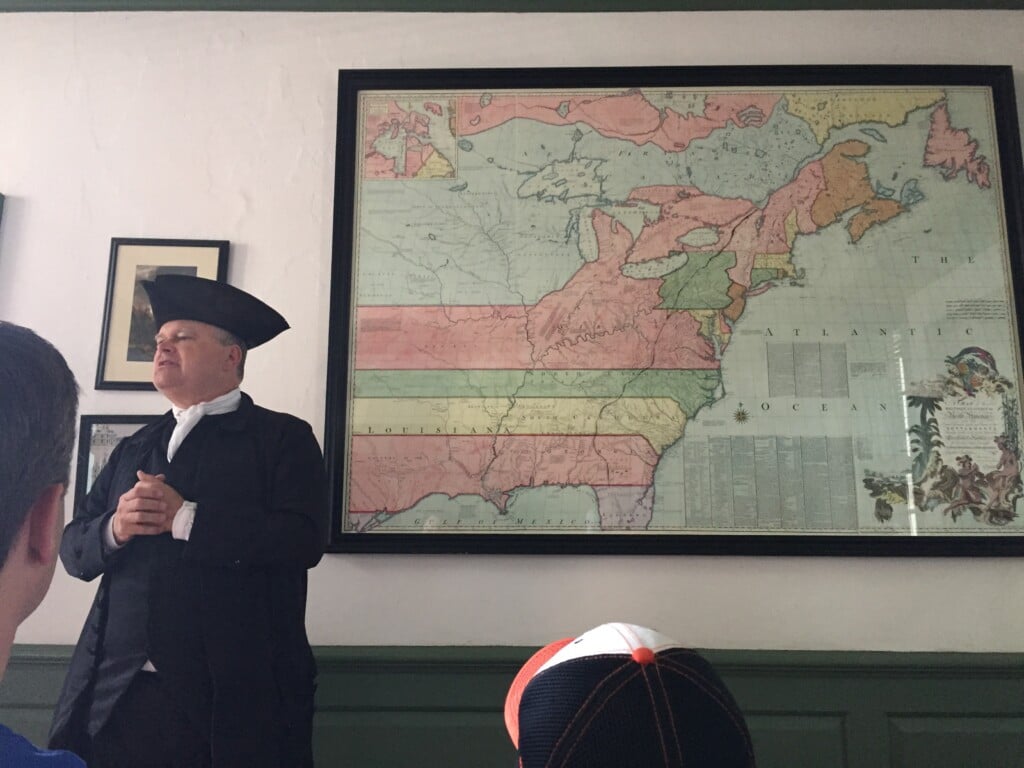 If you’ve never been to Williamsburg, it’s worth the trip. They have people dressed in period costumes, and (for the most part), they stay faithfully in character, pretending to be living back in the Revolutionary War period just before the actual war began. Check out the cool map on the wall above. States were a lot wider back then! 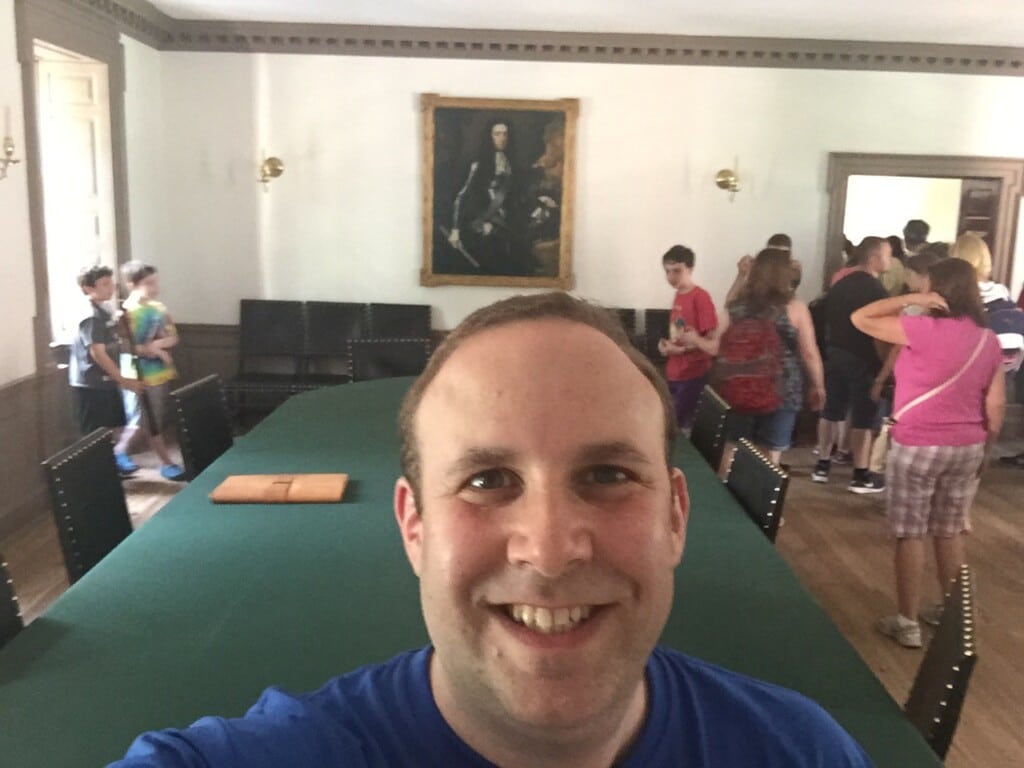 Upstairs in the Palace, this was the main meeting room where important laws were signed. It stood between two adjacent rooms, one for the colonists government and one for the British government. I don’t have to tell you how luxurious the British room was in comparison to the sparse colonists’ one. 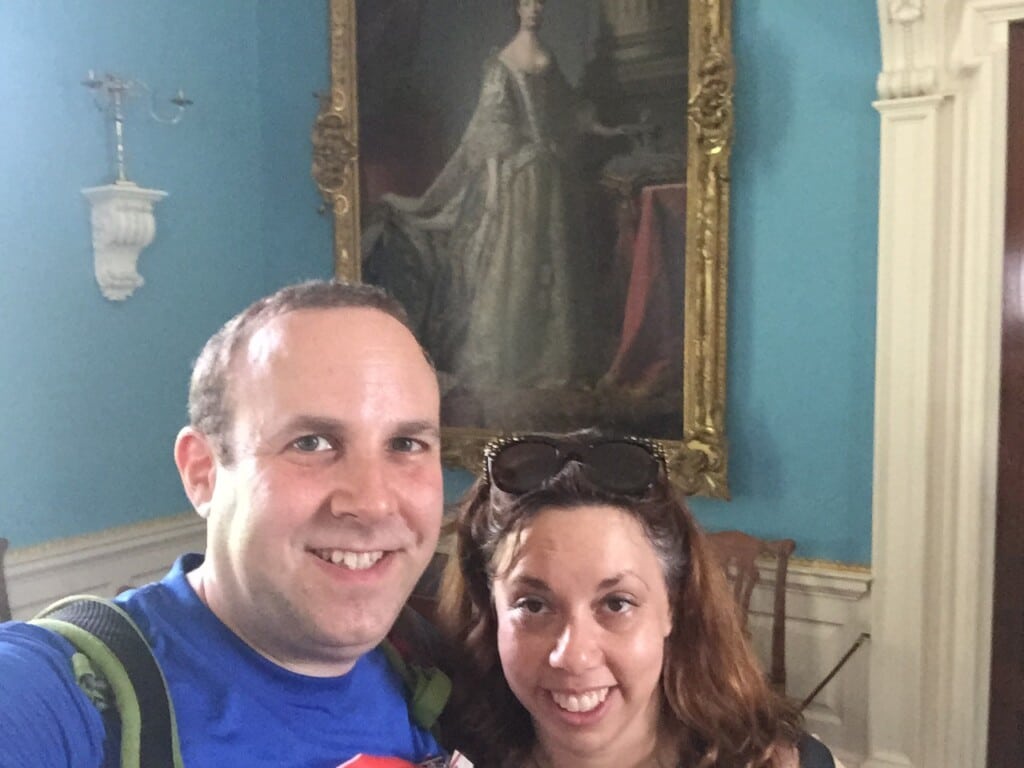 Had to take a quick selfie with Allie in front of some painting of someone who I’ve long since forgotten. 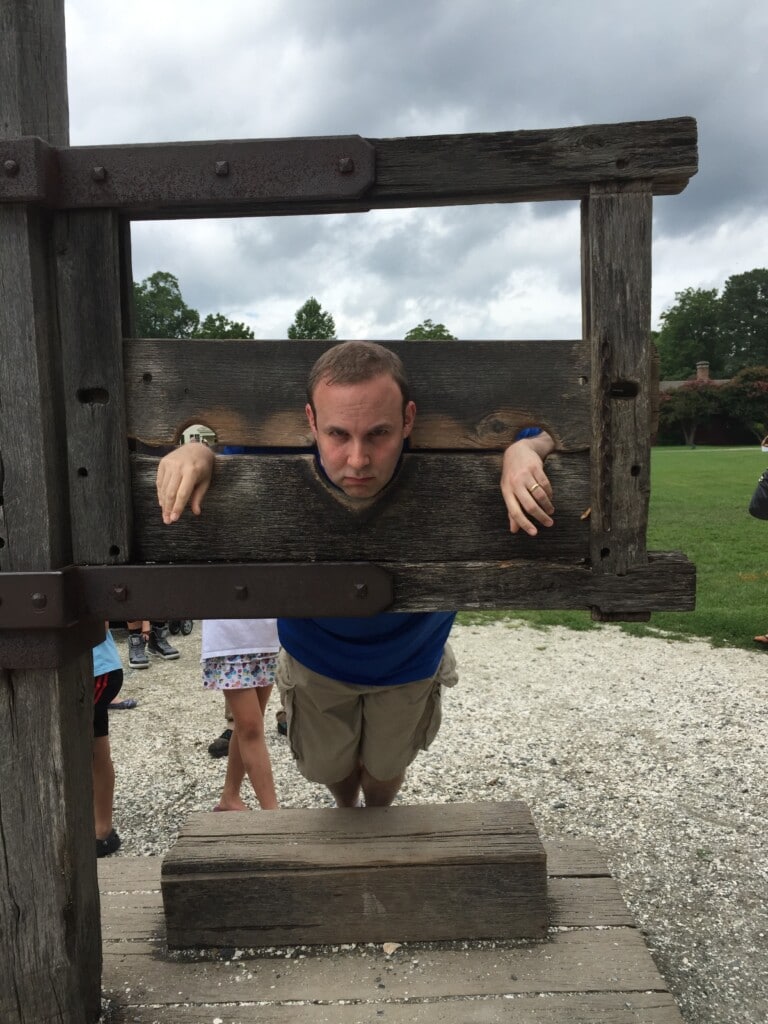 After the Governor’s Palace, we continued walking around until I apparently broke the law and got tossed in the stockade. Whose fault was it really? Glad you asked… 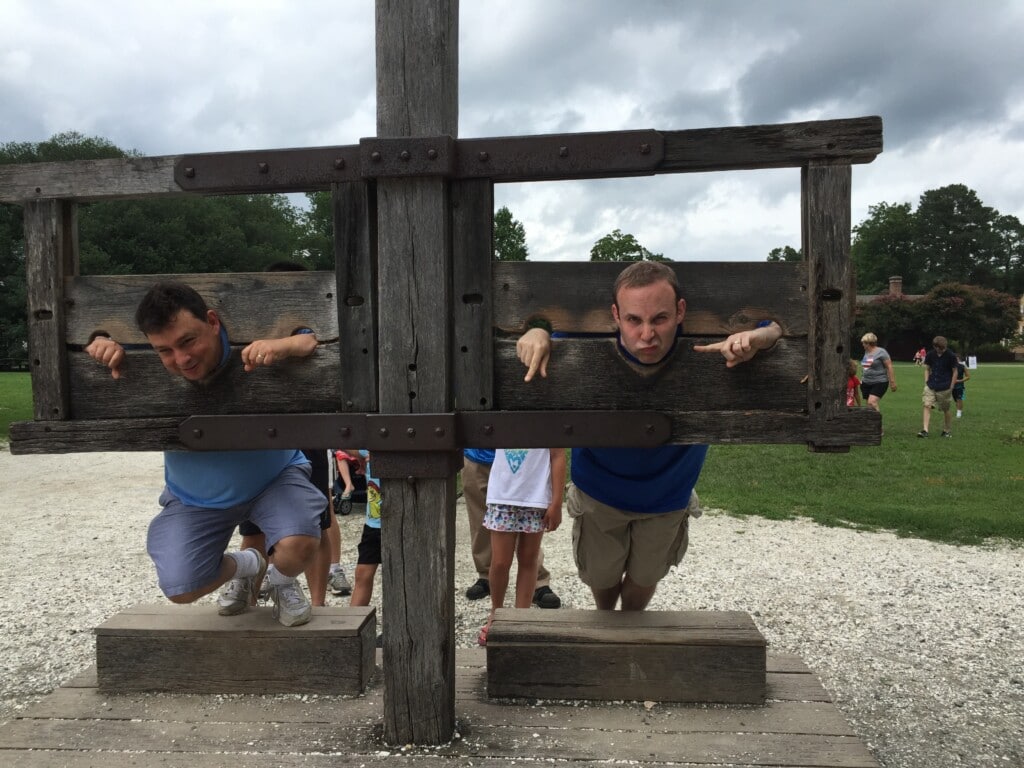 Yeah I blame Ira for this one. 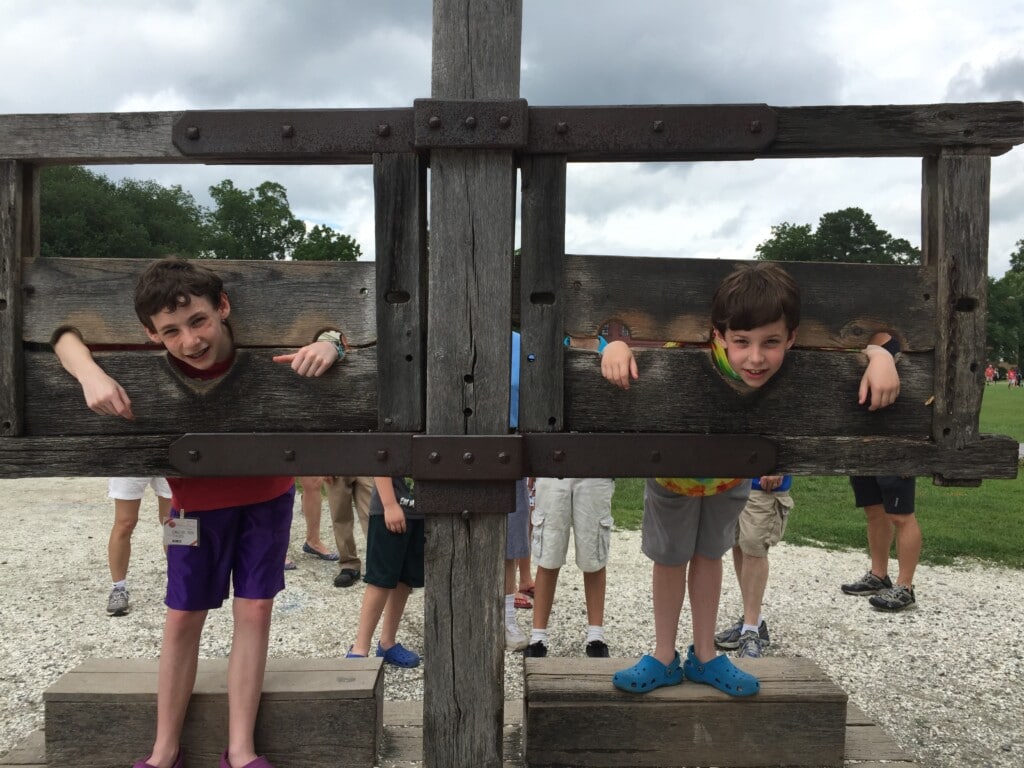 Apparently there’s no age requirement for getting shackled up in the main town square. 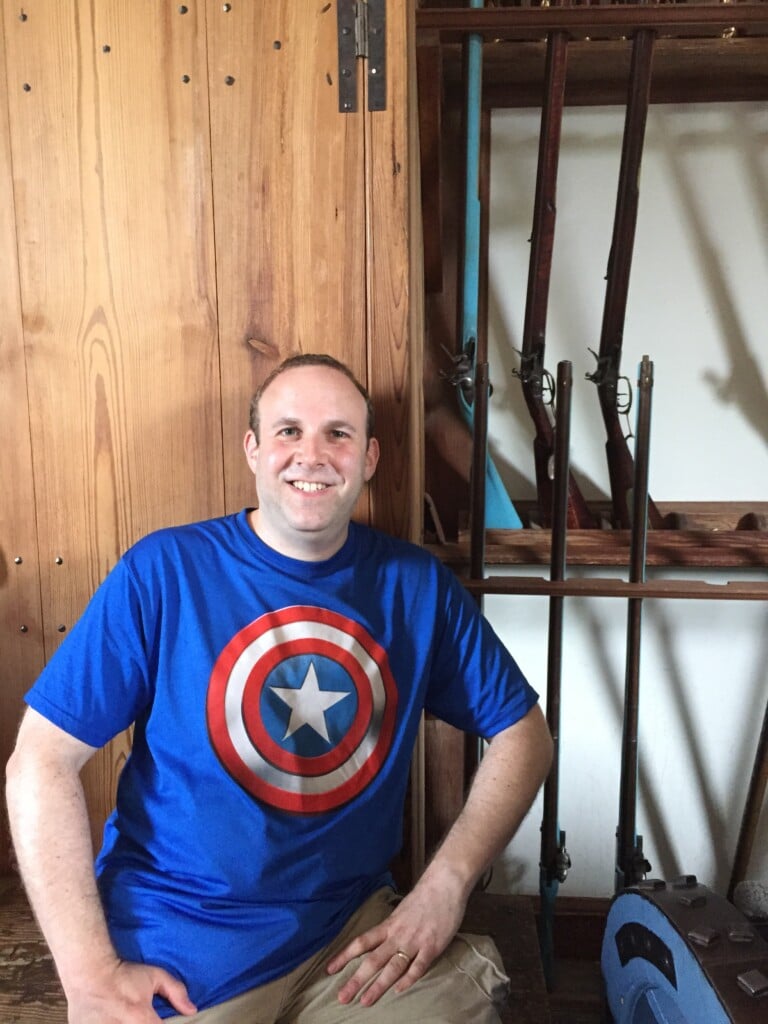 At the armory, we got the lowdown on all the different types of rifles and muskets, both for militia use and personal protection. I asked why that one gun was blue and found out that it was a “trade” gun that many of the colonists would use to trade for goods with Indians. So of course, it meant that the quality was subpar and cheap parts were used. The Indians actually liked their guns painted like that, so it made it real easy for Colonists to know to avoid purchasing these inferior guns themselves. 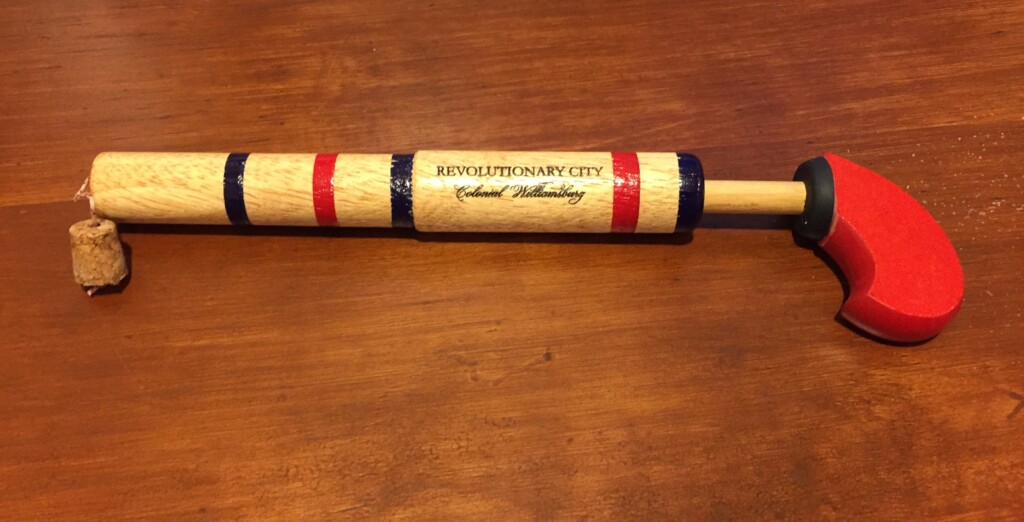 Speaking of guns, look what I found in one of the shops on the main street! Yes, the exact same type of gun I had as a kid! So of course I had to buy one for myself and one for each of the boys. For some crazy reason, Allie didn’t want one. 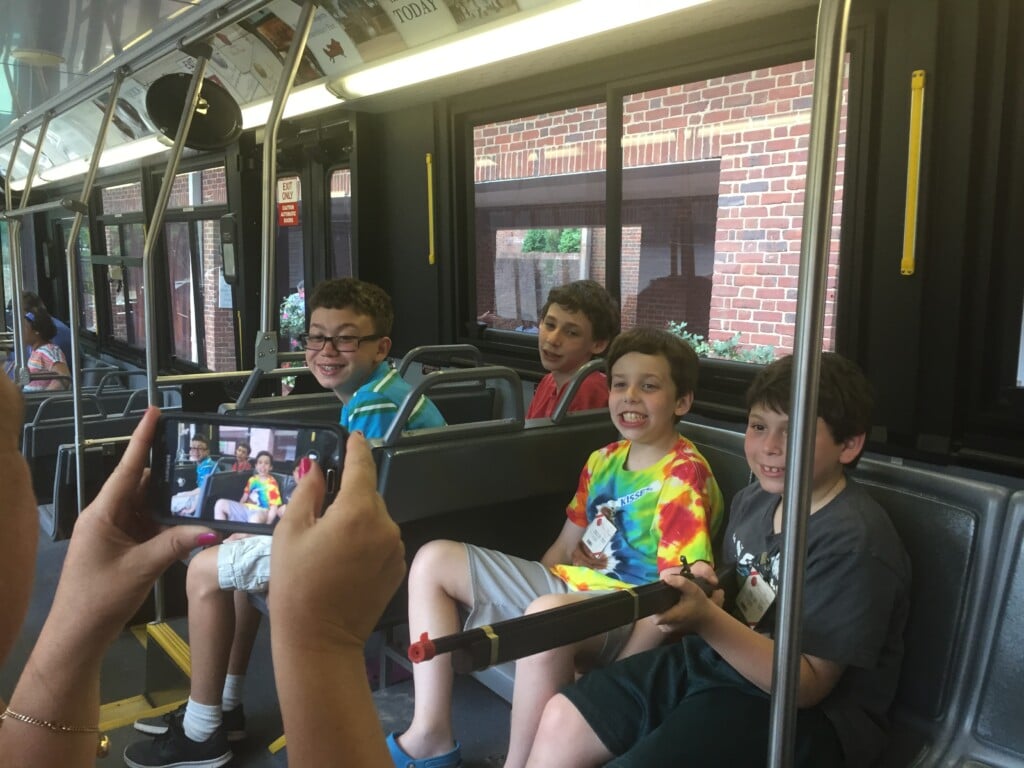 While we walked most of the way, we did hop onto a few of the shuttles, particularly when we went outside the main drag for a lunch break. Ethan isn’t a big fan of photos it seems. I just love this shot because you can see the photo within Ivy’s phone. It’s a photo of a photo! 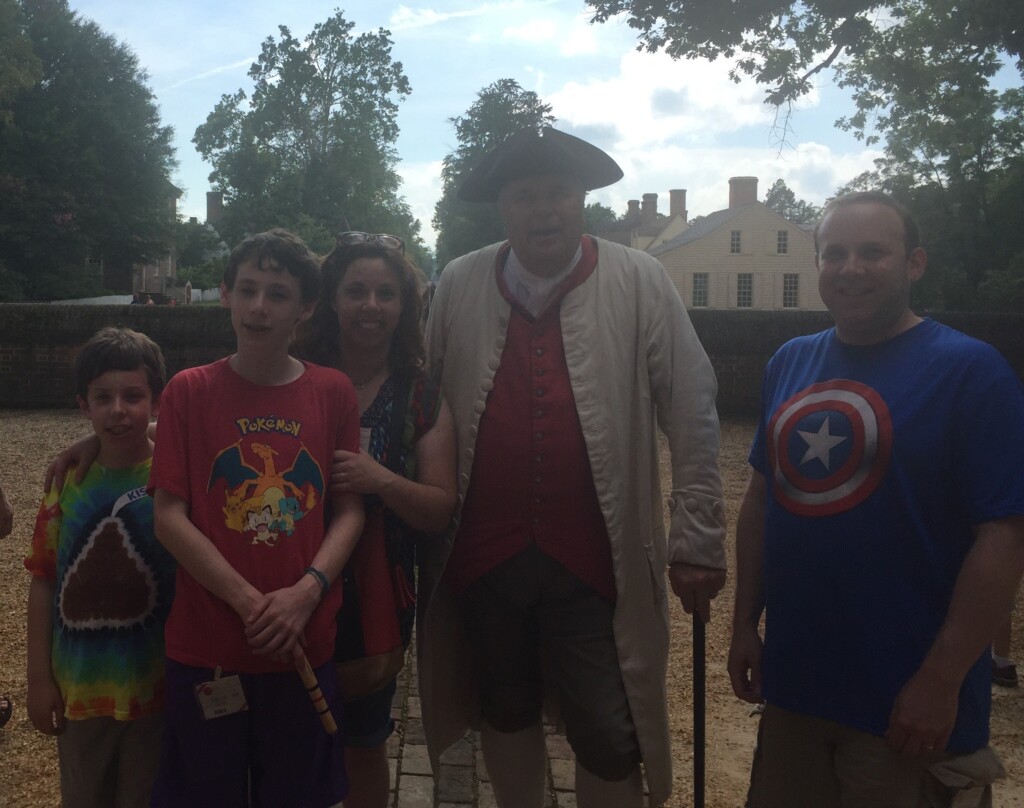 We ended the day at the Capitol building which was a really great tour. Folks like Patrick Henry and some guy named Thomas Jefferson had spent time in there pushing for all sorts of rights and “declarations.” This guy was kind enough to pose with us for a family photo (sorry for the washout from the sun) after the tour. 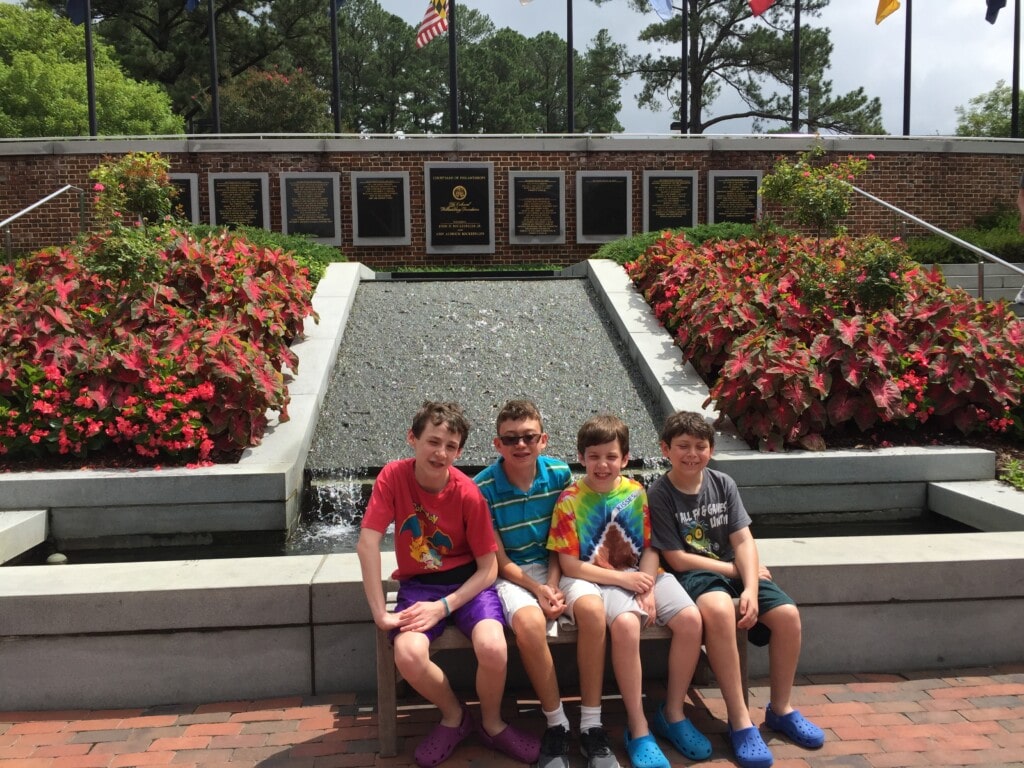 We ended the day back at the Visitor’s Center a bit wiser and certainly a lot hotter and sweatier. As expected, the adults loved Colonial Williamsburg much more than the kids did. But that’s probably because we hit two amusement parks the days prior. I’d love to go back in the future and spend a lot more time there so we can really see all the fun places such as the Blacksmith or Shoemaker.

Hope you had a great 4th wherever you spent it! 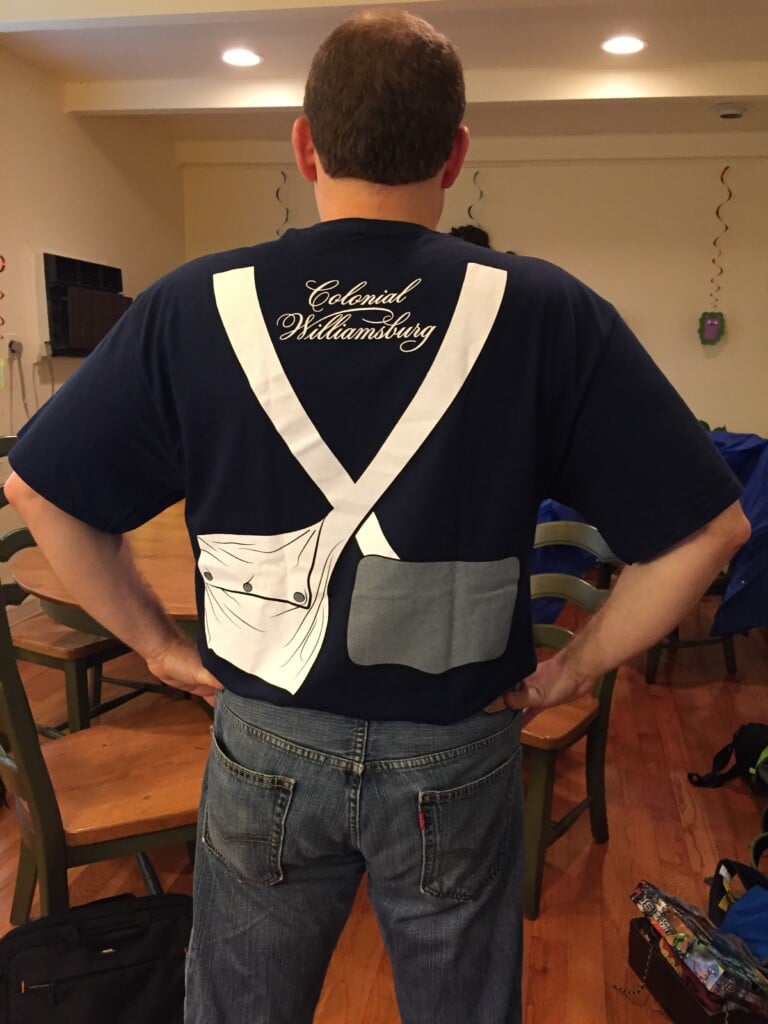 Have you ever been to Colonial Williamsburg?

10 thoughts on “Spending the 4th of July in Colonial Williamsburg”