When my wife asked me if I wanted to attend Star Wars Night at Yankee Stadium this past weekend, I think I had purchased tickets before she even checked our calendar. But thank The Force, we were free.

Any Yankee game is fun for me to attend. What with the hot dogs. The Beer. The merchandise. The scoreboard. Oh yeah, and the game. But a Star Wars Night at a Yankee game? Awww, yeah!

We got to Yankee Stadium at 5 pm for a 7:05 game. The last few trips, we didn’t get a chance to visit Monument Park because it closed by the time we got there. Plus, since it was Star Wars Night, I wanted to make sure we were one of the first 18,000 entrants so we could snag our free Darth Vader Yankees Hat! 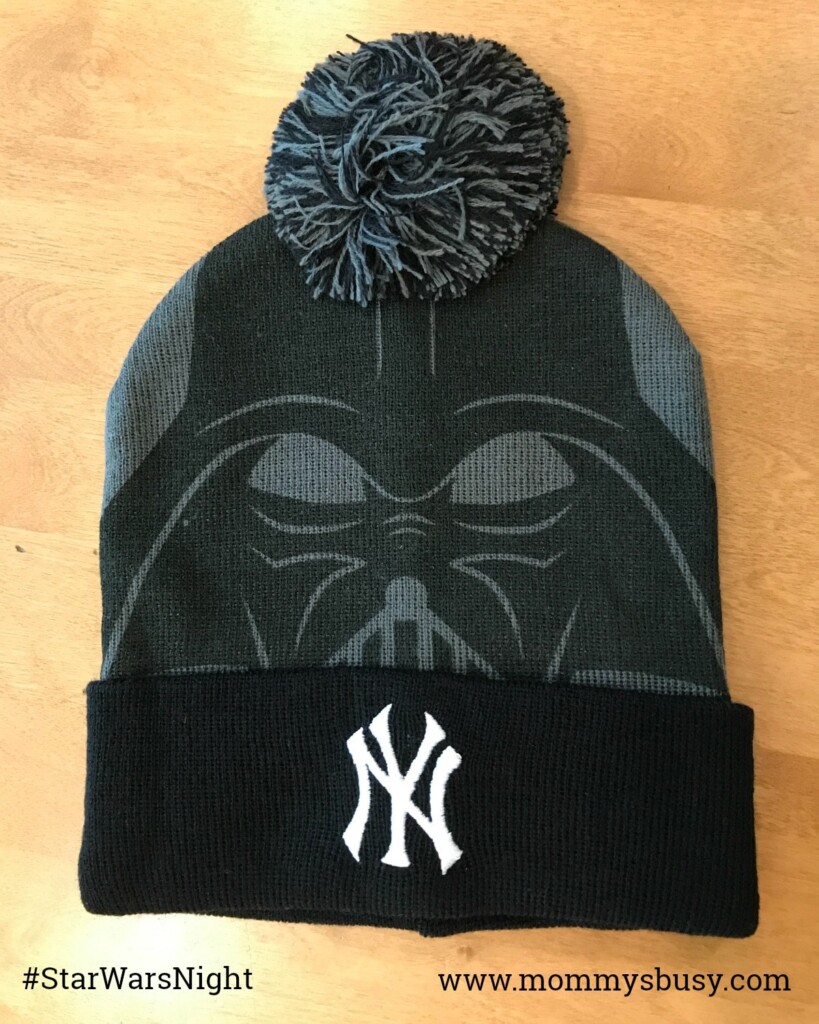 It’s a bit too warm at the moment to wear, but I can’t wait for the first snowfall!

After grabbing that slick freebie, I suddenly was faced with a monumental task. There was a short line right nearby. What was it for? Well, a few folks dressed as Star Wars characters (including that bad boy Kylo Ren!) were there for you to get photos with!

Do I wait on line and get some geeky photos or run to Monument Park with the family. I felt the pull of the Dark Side quite strongly but being in Yankee Stadium, the Light Side shone through and I quickly shook my head, came to my senses and took off for Monument Park! 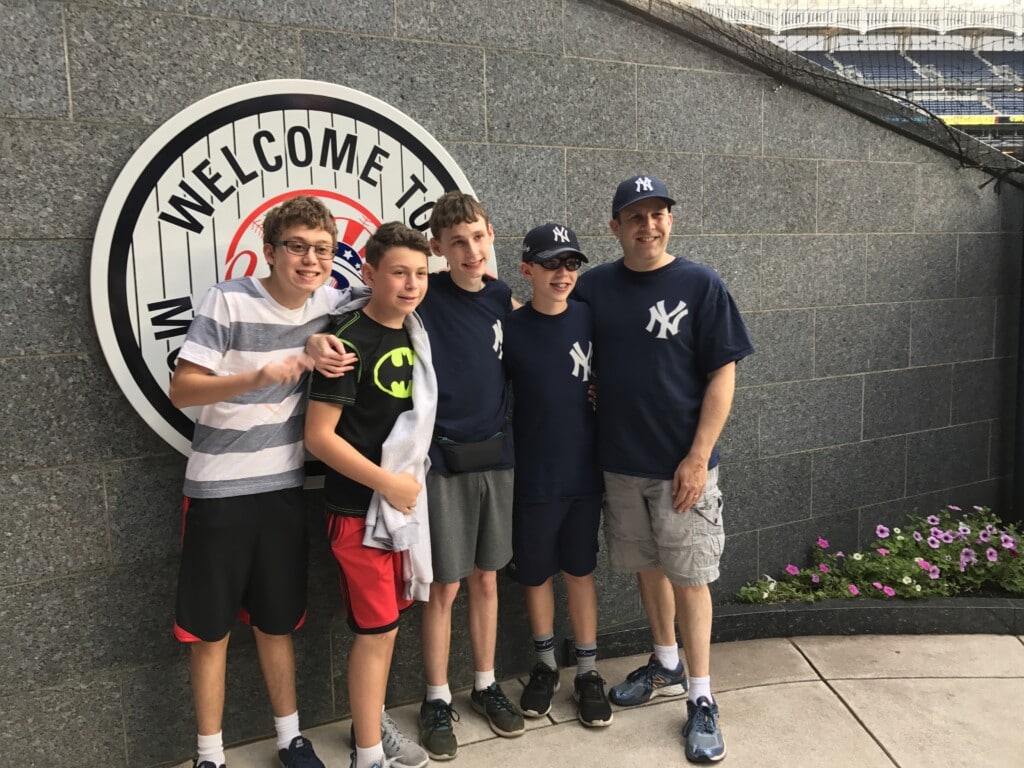 In case you’ve never been to Yankee Stadium (or to Monument Park), join us for a quick tour of this legendary mini-museum that’s located just behind the right field part of the park.

You’ll notice two extra boys in that picture too. No, we didn’t pick up some strays. Those are our travel-companion cousins Matt and Ethan who joined us for the game. We’d actually been to a Yankees game with them a few years ago, but that was up in Toronto! 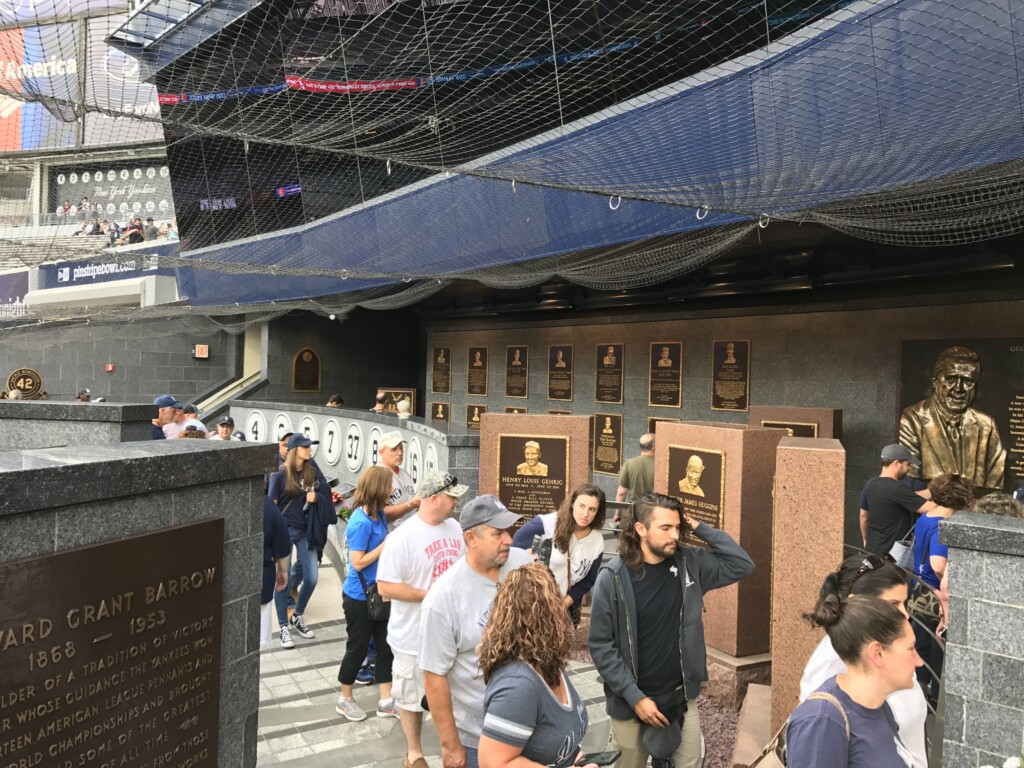 As its name suggests, Monument Park is chock full of… well, monuments. And plaques. And loads of pinstripes and numbers. 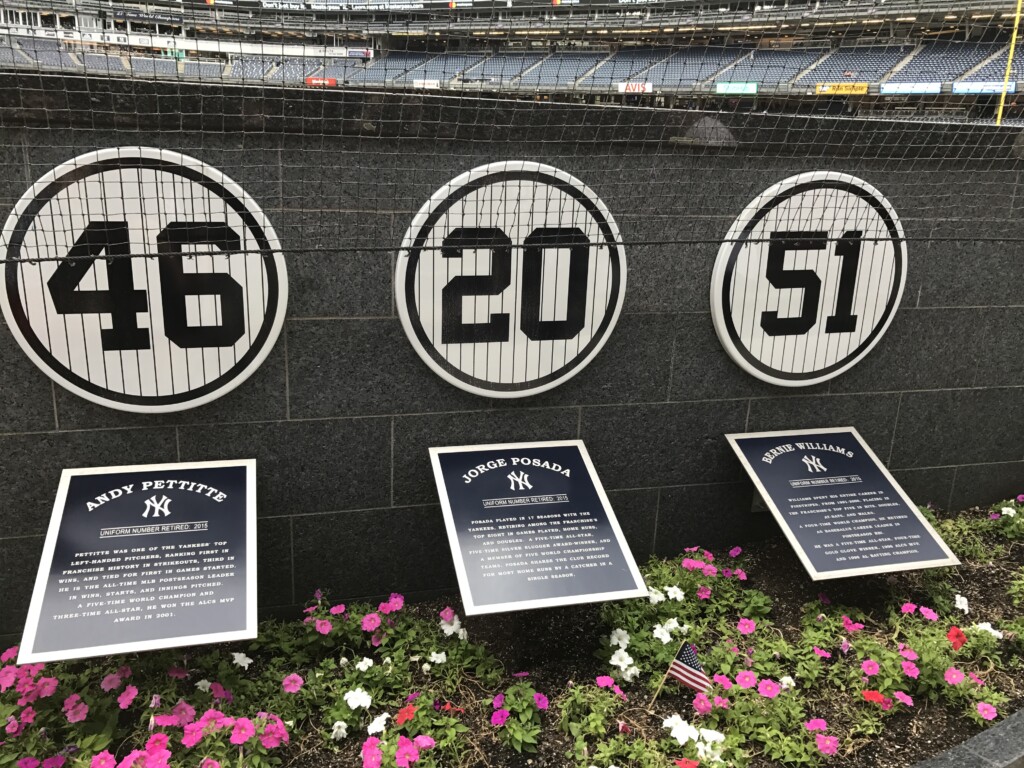 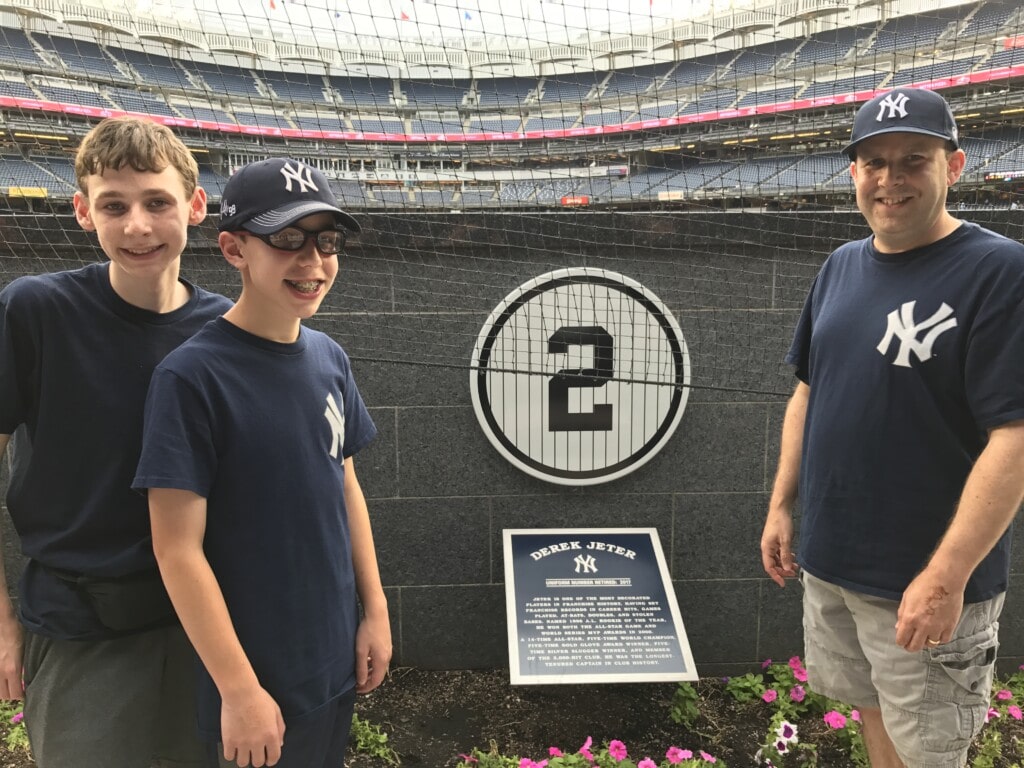 Next up is a definite fan-favorite, a tribute to The Captain, otherwise known as Derek Jeter. 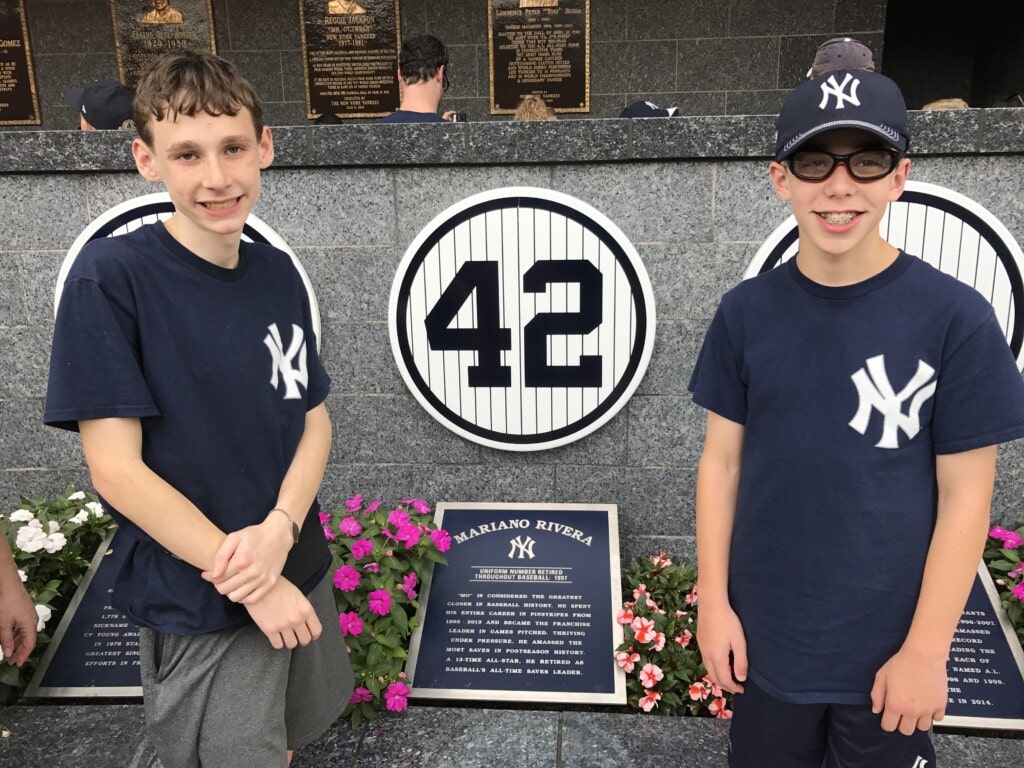 There are tons of retired numbers and legends (Mickey Mantle, Yogi Berra, Roger Maris, Lou Gehrig, Billy Martin, Ron Guidry, Thurman Munson, Reggie Jackson…), but one of the most revered in recent memory has to be the greatest closer in the game of baseball, Mariano Rivera.

We walked around the rest of Monument Park, learning the history of these Yankee greats and then headed up to our seats for some Star Wars Night fun!

Before the game started, a slew of Star Wars characters lined up back behind center field. I saw loads of stormtroopers waving First Order flags. Then everyone (Sith and Rebels alike) walked around the entire warning track, waving to the crowds. Kylo Ren, Darth Vader and loads of Stormtroopers led the parade, while tons of familiar good guys followed behind.

I saw both old and new characters from Ben Kenobi to Luke Skywalker to Han and Leia, as well as Rey, Poe and even Chewbacca. My favorite was some guy dressed fully in a brown and white Ewok costume. I’m fairly certain he was Logray, for you Star Wars fans out there. 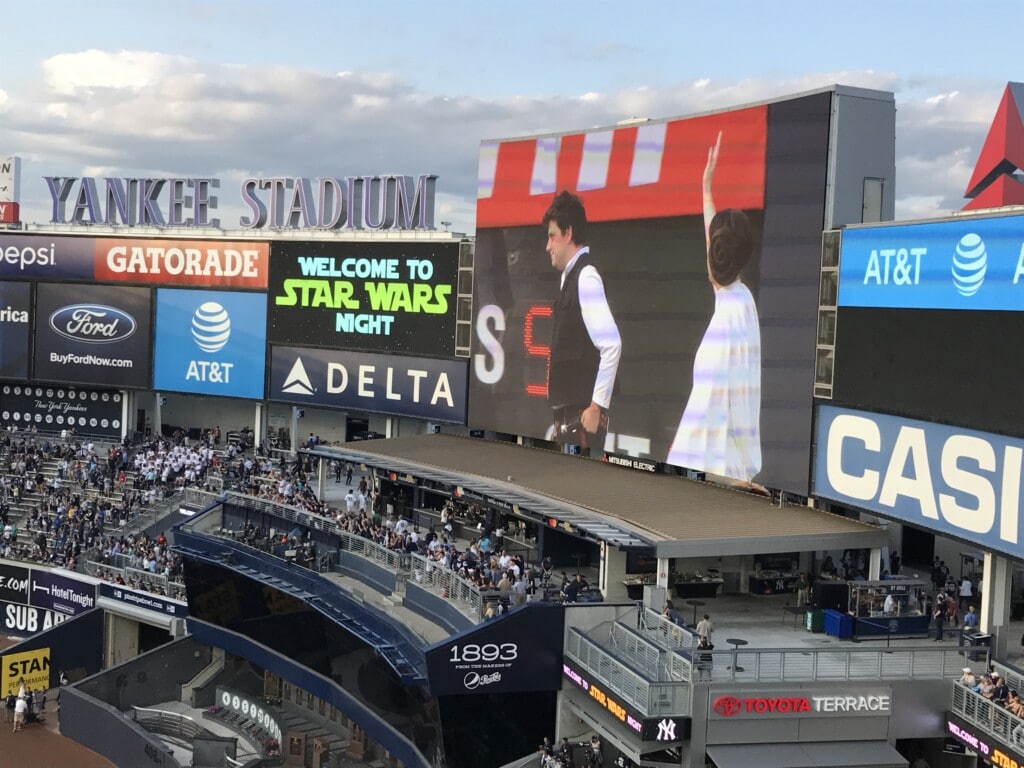 The jumbotron was displaying the entire parade for all to see. Here’s Han and Leia waving to the crowd. Clearly Leia waved first. 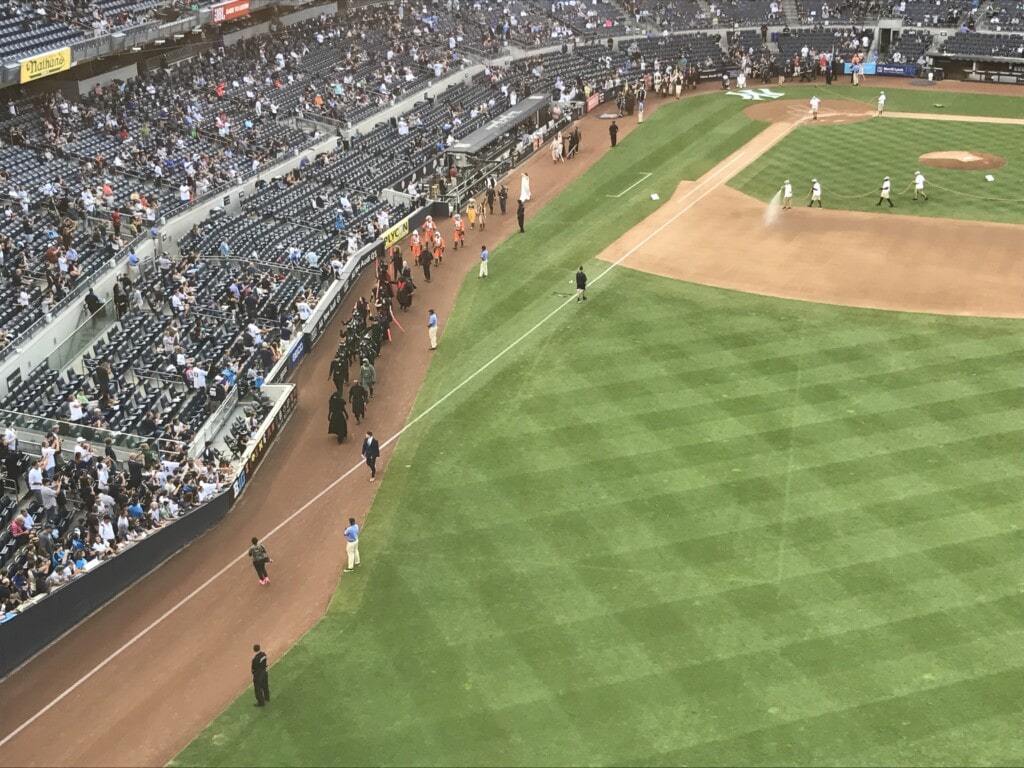 Chewbacca was having the most fun it seemed as he was way behind everyone else. He kept stopping and dancing for the crowd, even getting some of the Yankees revved up in the dugout. For the ceremonial first pitch, Darth Vader came out with a young boy. They stood on the mound and Vader must have been channeling The Force, since this little kid nearly through a strike right down the middle! 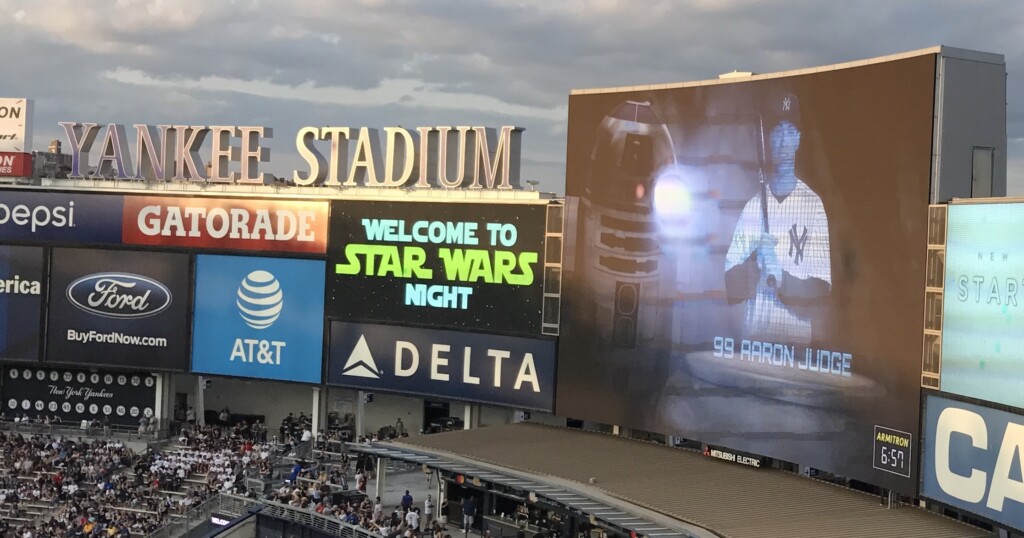 As the starting lineups were announced on the jumbotron, more Star Wars fun ensued. Instead of the normal photos of each individual player, the Mariners were all replaced with a picture of a Stormtrooper. Each Yankee player, however, was shown wearing a rebel uniform. Additionally, the Yankees were displayed as that ol’ familiar bluish hologram. 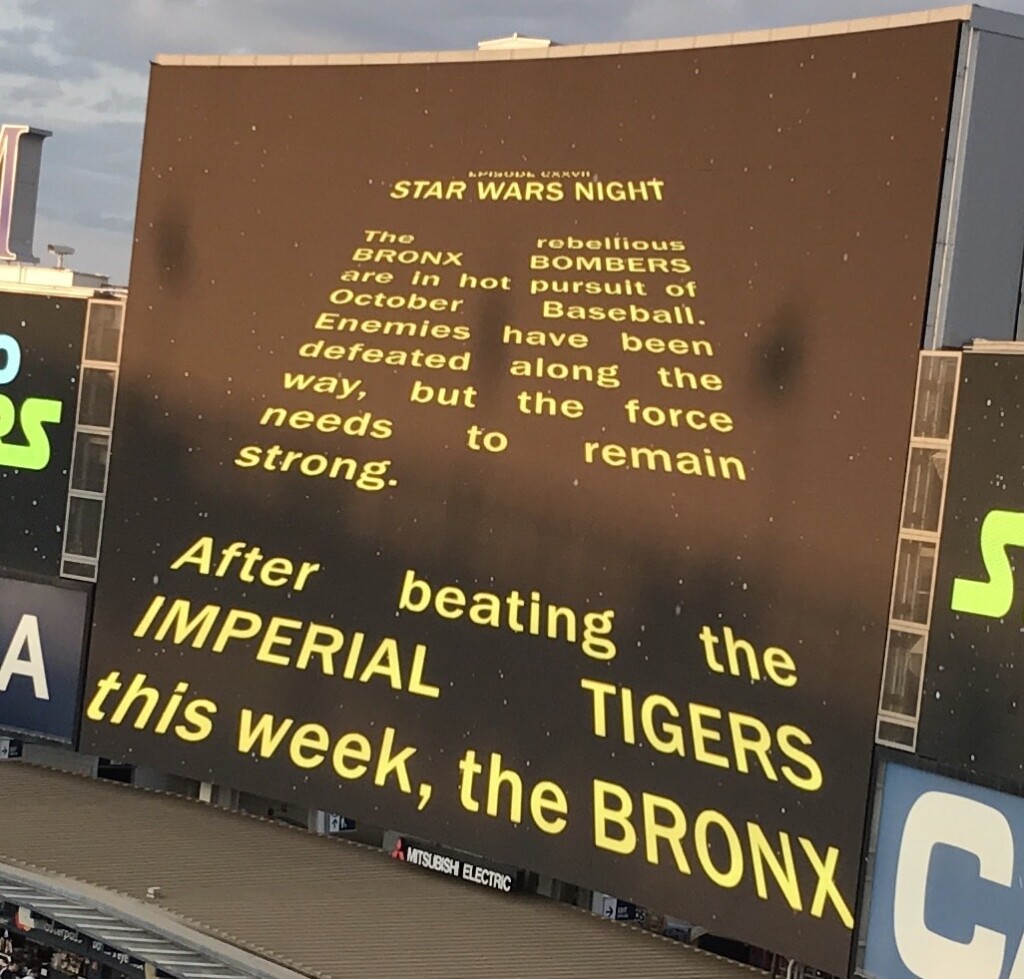 My favorite though was the crawl. Just like at the beginning of every single Star Wars movie, fans of Star Wars Night at Yankee Stadium were treated to a full movie crawl setting up the night’s matchup between the Yankees and the Mariners.

Throughout the rest of the game, there were a number of Star Wars nods, including quick interviews with Yankee players asking who their favorite Star Wars character is. It was sad to see some of the younger players having no clue. But at least Aaron Judge stepped up and instantly answered, “Yoda!”

In the end, the Evil Empire sadly pulled out a victory 2-1 in extra innings. Despite the Yankee loss, we all had a great time and I can’t wait to snag my tickets for next year’s Star Wars Night!

Big thanks to my beautiful wife Allie for setting up such a fun night. The Force is definitely strong in our family. 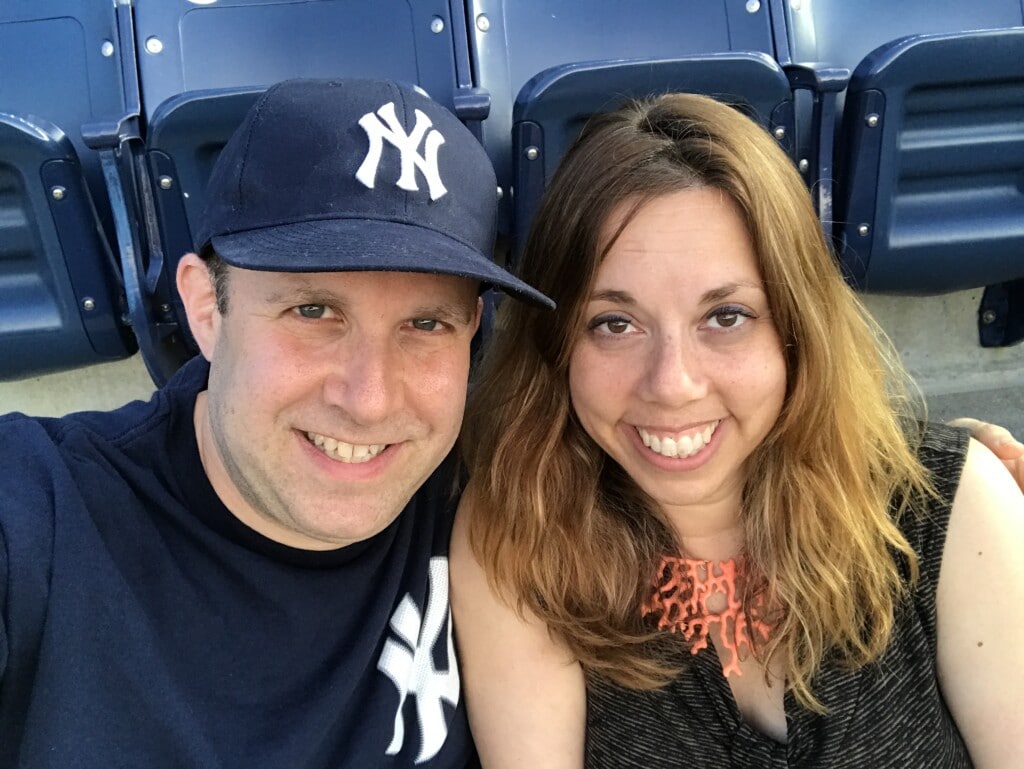 Would you attend a Star Wars Night for one of your teams?