If you read my previous road trip post (Niagara Falls, Here We Come), you’ll know about the long, action-packed adventure we had crossing the border into Niagara Falls. If you didn’t, go read it now so you’re all caught up. No worries, I’ll wait.

Okay, all caught up now? Good! Because the fun only continues from there! After spending about 24 hours in Niagara Falls, we hopped into the car (again, taking cousins Matt and Ethan with us for the ride), and headed for Toronto.

It was mid-afternoon and our only plan for Friday night was to hit the Toronto Blue Jays game at 7 p.m. Oh, did I mention who the Blue Jays happened to be hosting? Yep, that’d be the NY Yankees! Woot!

We estimated it’d take us about two hours to get there from Niagara. So when we left around 3:30 or so, that seemed like plenty of time to make it to the game before the first pitch. “Hah!” I say now.

Yes, we hit traffic on the way but not terrible. If that was all, we would’ve been fine. But once we got right into the Toronto area itself (close to 5:30), it was super crazy traffic that took us again, roughly an hour to go a few miles into downtown Toronto. Ugh, ugh, and ugh.

We finally made it into the streets and were less than 1 mile from our hotel (that’d be the gorgeous and ginormous Eaton Chelsea! Review coming soon!). We actually drove right past the Rogers Centre and could’ve just gotten out right there for the game! Instead, we figured we’d go check in, toss our luggage in our room and race over to the stadium just in time.

That would’ve been the case, except… as we turned onto the final street (which we’d just have to take about ¾ of a mile straight to our hotel), the traffic was stopped. Dead stopped. But only on our side.

Apparently on the next block right after a traffic light was a fire engine sitting in our lane. I didn’t see any fire or even firemen running around, so I’m not quite sure why it was sitting there. But traffic on the other lane kept coming, and the cars in front of us couldn’t move because of the fire engine, and the two busses right in front of them.

We ended up going around the block a bit and avoiding that traffic snarl, eventually making it to our hotel. Now I knew we were gonna miss the first inning for sure. Allie pulled up to the front of the hotel and I raced inside to check us in… only to see one humungous line at checkout. Apparently, the Eaton Chelsea is a pretty happening place.

Fast forward a bit and we checked in, Allie and her cousins parked and we raced up to our seriously sweet rooms. Everyone took a quick bathroom break and then bolted down to the lobby and out into the streets. We had to walk a bit through a mall to get to the Subway. By the way, in Canada if you see a sign saying “Metro,” it’s not a subway. It’s a supermarket. Just sayin’.

I have to stop for a minute to say how insanely cool the subways are in Toronto! Not just super clean, but way more practical. Unlike NYC subways (and most subway trains), all of the cars are open. So it really feels like it’s just one long train. You don’t need to open a door to step from one car to the next. That gives you even more room. Plus there are loads of pull-down handles to hold running down the center of the ceiling. Makes it real easy to travel.

We finally made it to our stop and then had quite a walk through a skywalk to get to the Rogers Centre. On the way, I passed a number of young people dressed up in interesting video game and superhero attire. My comic book convention sense was going crazy and sure enough, it happened to be Fan Expo that weekend. Sadly, we didn’t go.

By the time we ultimately made it to our seats, it was the 5th inning and the Yankees were down 1-0. Luckily, things turned around quickly. We got to see Jeter get a hit, Jacoby Ellsbury and Chase Headley knock out some homers (Blue Jays slugger Jose Bautista hit one out too), and the Yanks win 6-3!

I have to say, the Toronto Blue Jays fans were awesome. The entire park was crazy family friendly and even when a few lone Yankees fans were cheering on their winning team, there was no backlash whatsoever. Quite the difference from watching a game at Yankees stadium where every other second is loudly punctuated with an F-bomb no matter what’s happening on the field.

The next day we got schooled. Yes, we hit a museum! We’d heard great things about the Ontario Science Centre, and they were all true! It’s packed with loads and loads of hands-on activities for kids (and adults!). We spent a few hours there and only saw a small fraction of the place.

After the museum, we headed back to the hotel to relax a bit. The kids went swimming, while Ivy went shopping and came back with pure awesomeness. Y’see, one really cool thing about Canada? They are light-years ahead of us Americans when it comes to food allergies.

Ivy brought back a bag of Nestle (yes, Nestle) KitKats and Scaries (Halloween-themed version of Smarties). The bags had a huge Peanut Free logo on them. Jason can’t eat the regular (made by Hershey) KitKats because they may contain traces of peanuts.

But did they taste good? What does this face tell you? 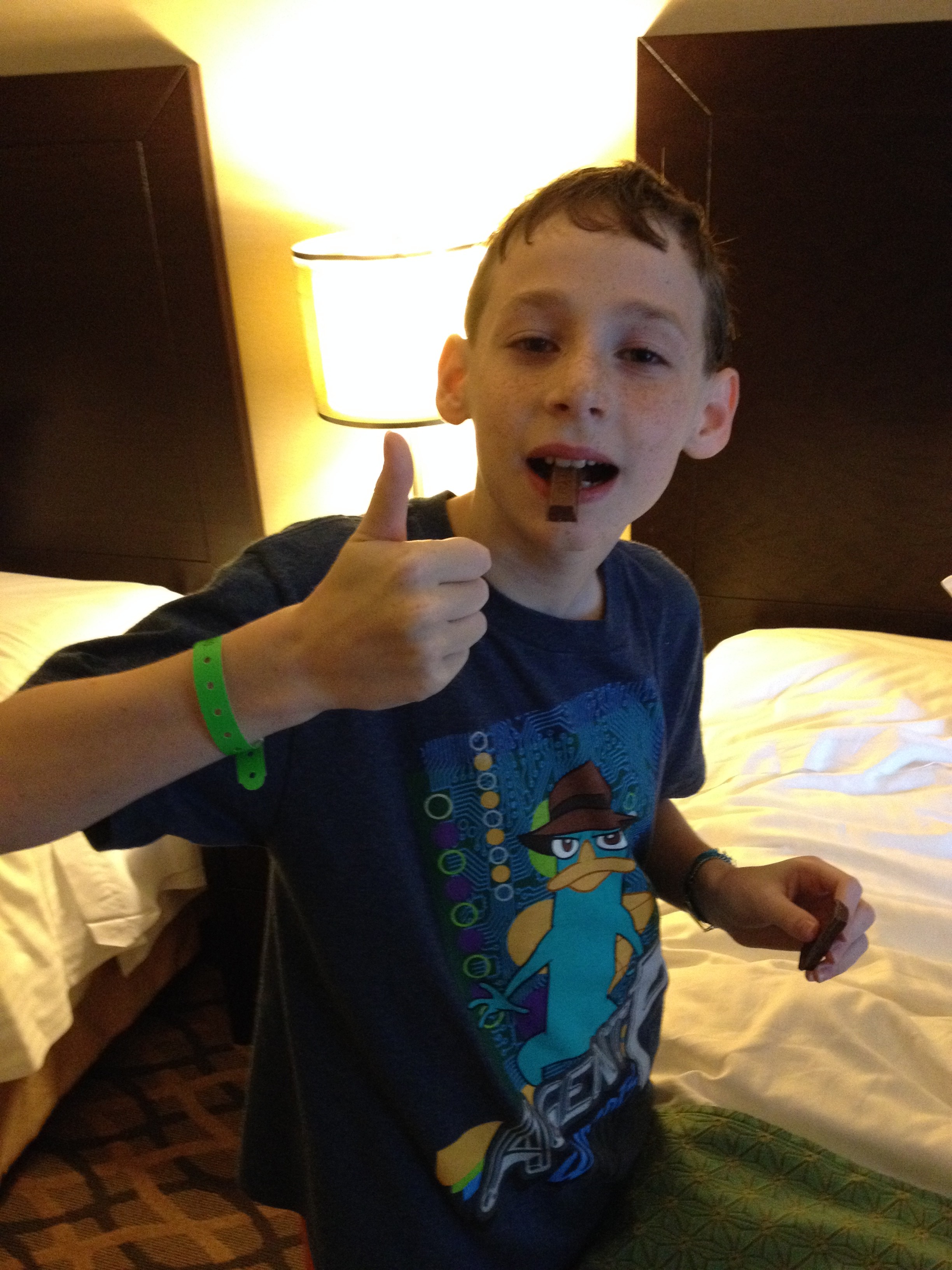 Finally, to round out our trip to Toronto, we spent our last night going up the CN Tower. Yes, it’s basically a super tall building that you pay a ridiculous amount of money to wait in a super long line before going up to look out at the city views. And I’ll tell ya what… it was totally worth every penny!

We did have to wait a bit (roughly 30 minutes) before getting in the elevator that took us up roughly 1,136 feet. There’s a large area to walk around with glass windows everywhere. It was really cool going at night too. We’d love to go back and do it again during the day.

Ira and Ethan stayed down below, but Ivy and Matt enjoyed the views with us. 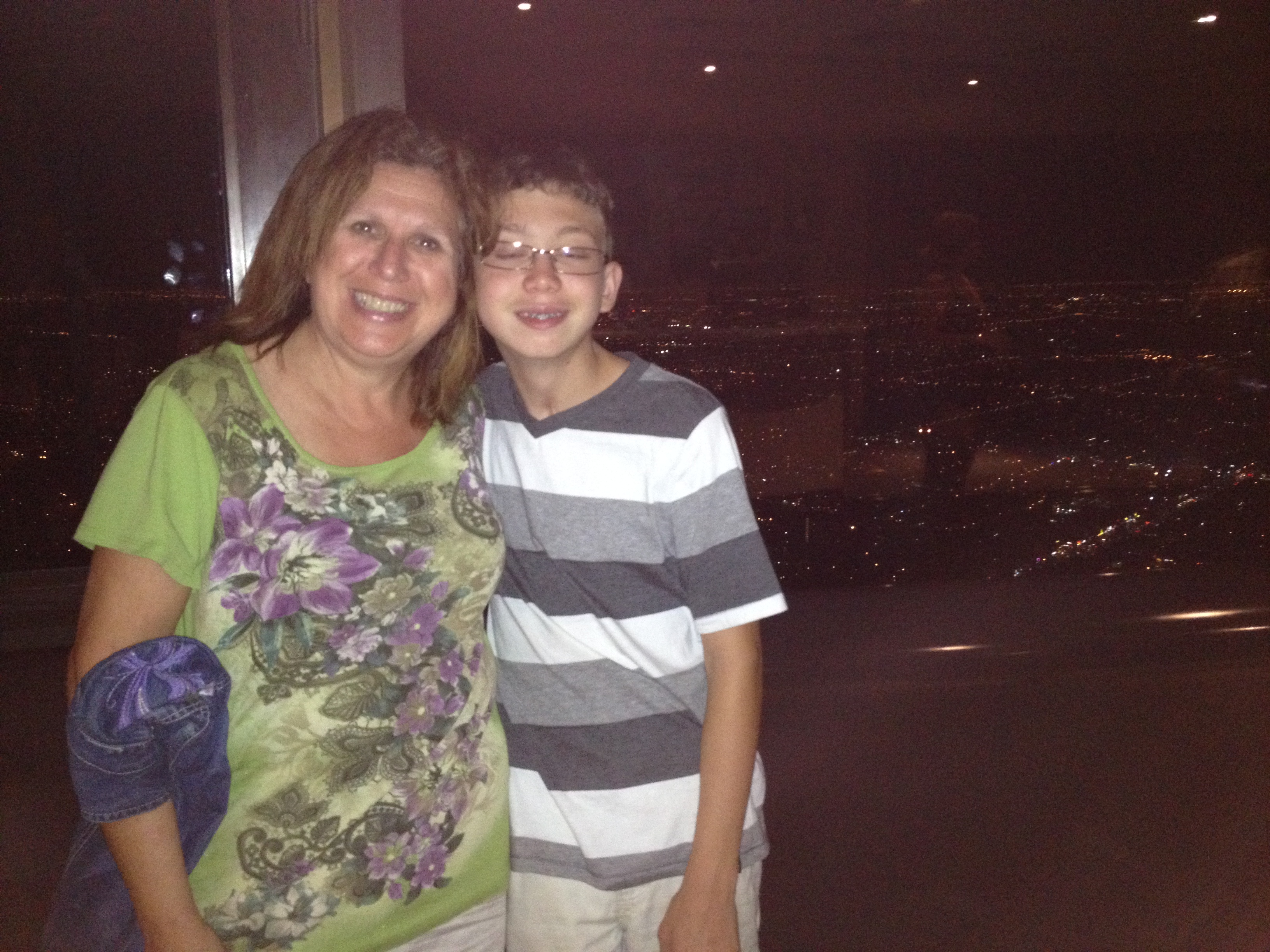 What’s really neat, though, is you can walk down a flight of stairs and then actually go outside for a view. It was crazy windy and the changing colored lights of the CN Tower kept flooding us.

And the really really neat thing was that inside this level was the Glass Floor! It’s a small area made up of thick glass panes that look out over the huge drop below.

I ran right out to it to sit down and was surprised to see Jason join me! Allie and Ryan stayed on the sides not too happy with the two of us. It didn’t help that these two little kids were standing on the glass near us, jumping up and down as hard as they could.

For those keeping score at home… we survived. The glass didn’t break. The elevator didn’t fail. And we made it down safely to the bottom. The next day, we just packed up and spent the entire day driving home. It was a really long trip, full of loads of bathroom breaks. And coffee breaks. And more bathroom breaks.

We jammed a ton of fun into a short trip and had such an amazing time. Canada takes a lot of heat from us Americans (with South Park being the biggest culprit), but you guys are pretty darn awesome. 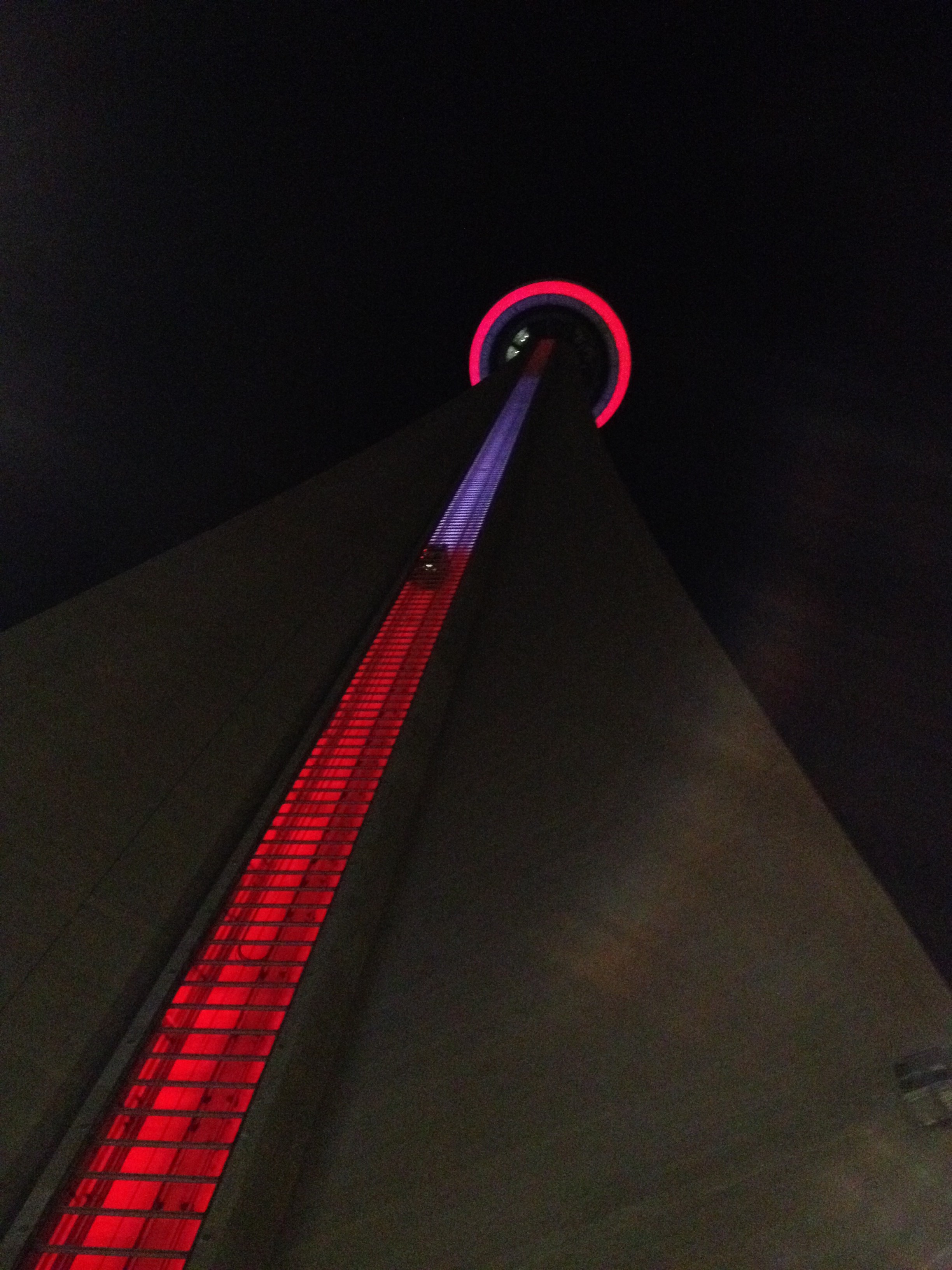 Have you ever been to Toronto?

Be sure to read Canada Road Trip, Part 1 – Niagara Falls, Here We Come!