I have partnered with Life of Dad and Idahoan® Foods for  this campaign, but my opinions are my own. 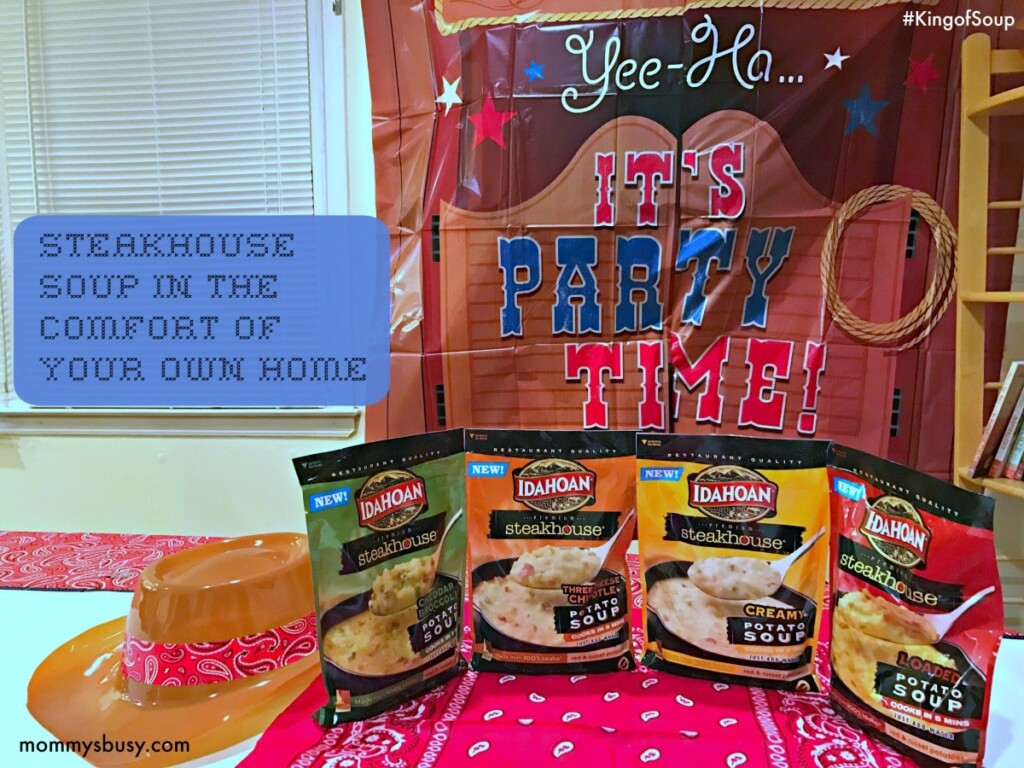 Like most men, I’m a big steak and potatoes kind of guy. Granted if you ask me what my favorite food is, my first response is probably, “yes.” I love it all. Pizza. Sushi. Burgers. Just about anything except olives. But when it comes right down to it, if you plop me in a chair at a decent steakhouse, I’d be in my own personal heaven.

Seriously, unless you’re a vegetarian, who doesn’t love steakhouses?!? I remember back to my college days at SUNY Binghamton. There was a local steakhouse in town that everybody always talked about. It was THE place to go to on parents’ weekend. No way you’d miss it from the highway either, since there was a ginormous bull statue on the roof!

The place was fantastic. Fancyish. Loads of atmosphere. And then, the food. Sure, the steak was amazing! And the “bread guy” was constantly walking around doling out fresh-made rolls. But one of the best parts of any good steakhouse is that thick, creamy potato soup!

Yeah, steakhouse soup just fills you with pure warmth, both literally and figuratively! It’s a great way to get your stomach revved up for that glorious hunk of beef (I’m talking about the steak here, not the waiter!) that’s coming up next.

Now that the winter’s here in full force and the temperature’s dropped to single digits, some hot soup is most definitely a welcome visitor. But I haven’t had much luck in the past when it comes to recreating steakhouse soup. Canned soups are okay but nothing special. And they’re usually a bit too watery for my taste.

Luckily, thanks to the legion of peasants at Life of Dad, and the regal folks over at Idahoan® Foods, I’ve finally managed to transform my humble home into a five-star steakhouse!

Yep, Idahoan® Premium Steakhouse® Potato Soups are unlike any other soup you’ve ever made at home. Not only are they incredibly easy to make (Uh, just add water!), but they take all of 5 minutes to cook! And with that creamy, slow-cooked potato taste, you’d swear you were sitting in a steakhouse rather than your own kitchen. 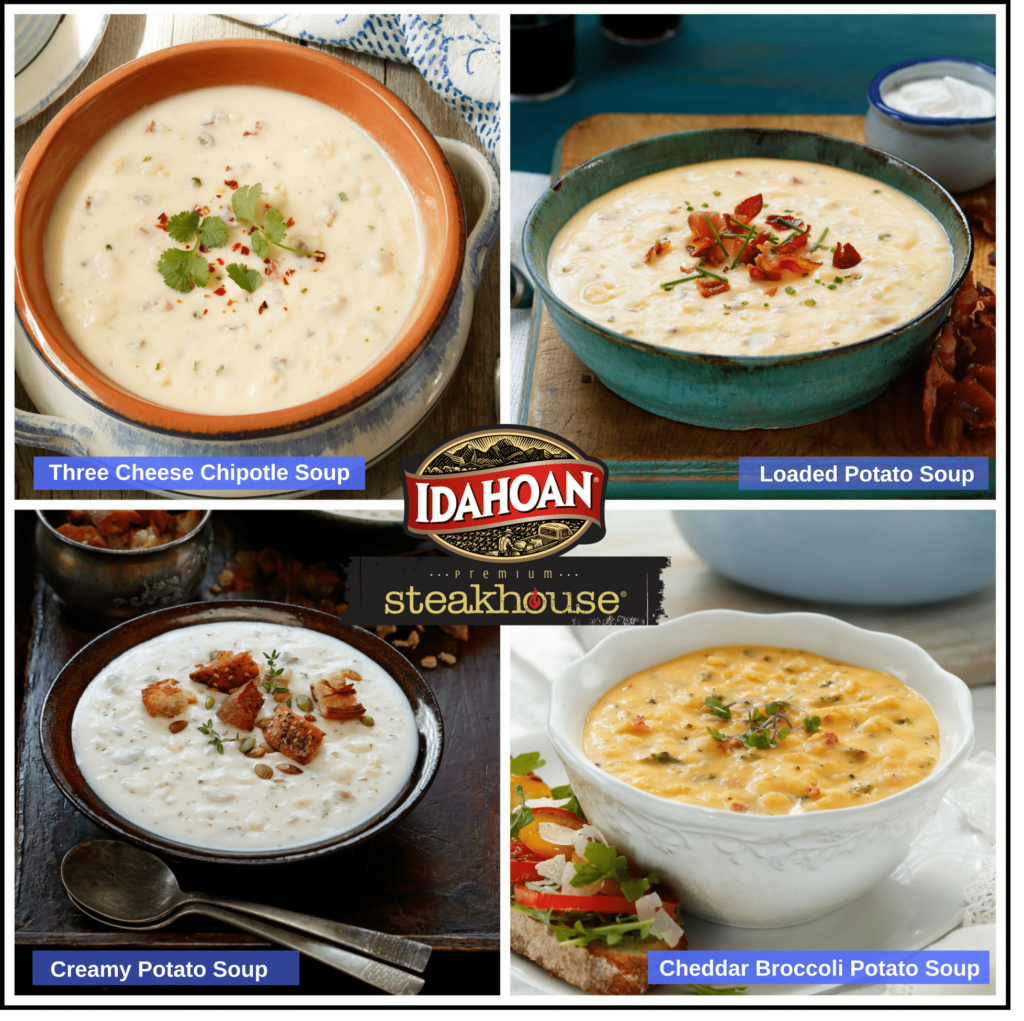 All this talk about steakhouse soup has got me in the mood for a steakhouse. So much so, in fact, that I decided to completely transform our dining room into a magnificent steakhouse experience.

Hungry? Why not join me as I introduce you to the newest steakhouse in town! 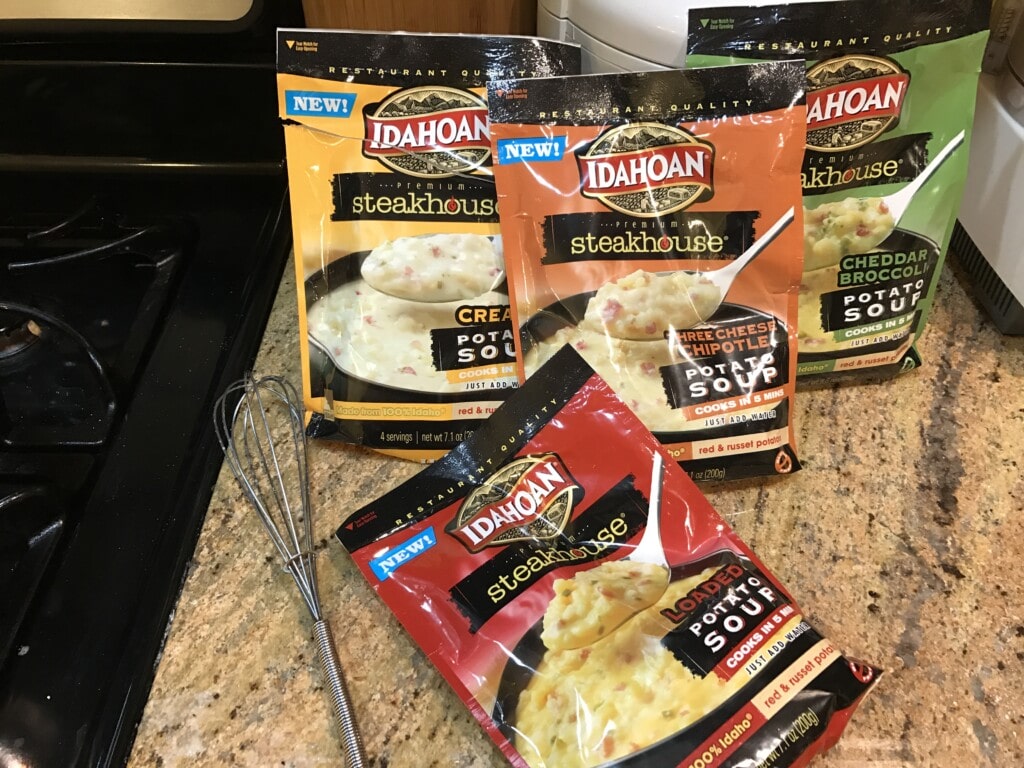 I may not be a certified steakhouse chef, but I do have some pretty good friends to help me out. 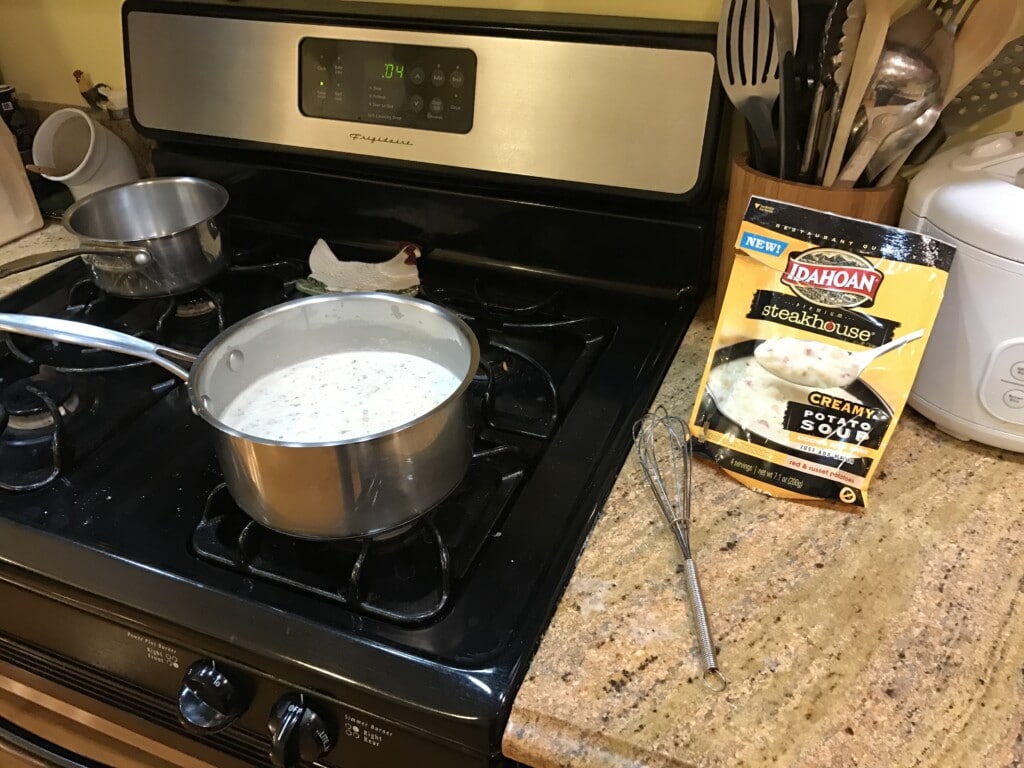 Seriously, this couldn’t be any easier. If you can boil water, you can make some delicious steakhouse soup. If you can’t boil water, well, I’m going to have to ask you to step away from the stove please. It’s for everyone’s safety, you understand. 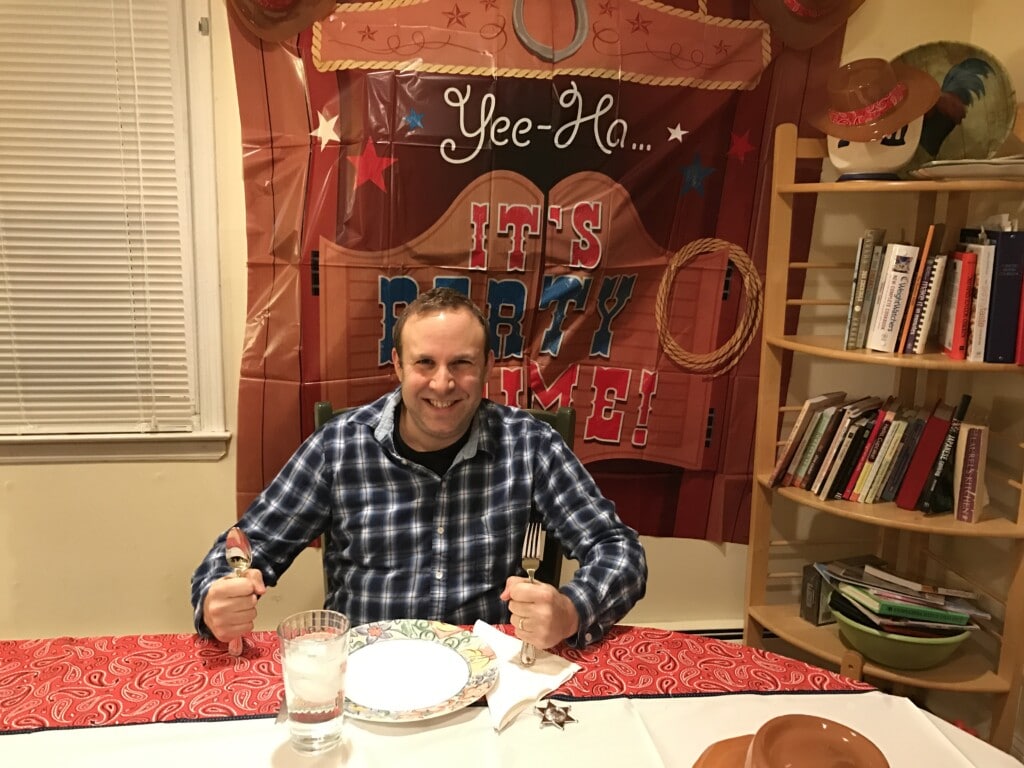 After I finished whipping up the soup, I decided to switch roles and become a diner in my very own steakhouse. I quickly took a seat and waited. 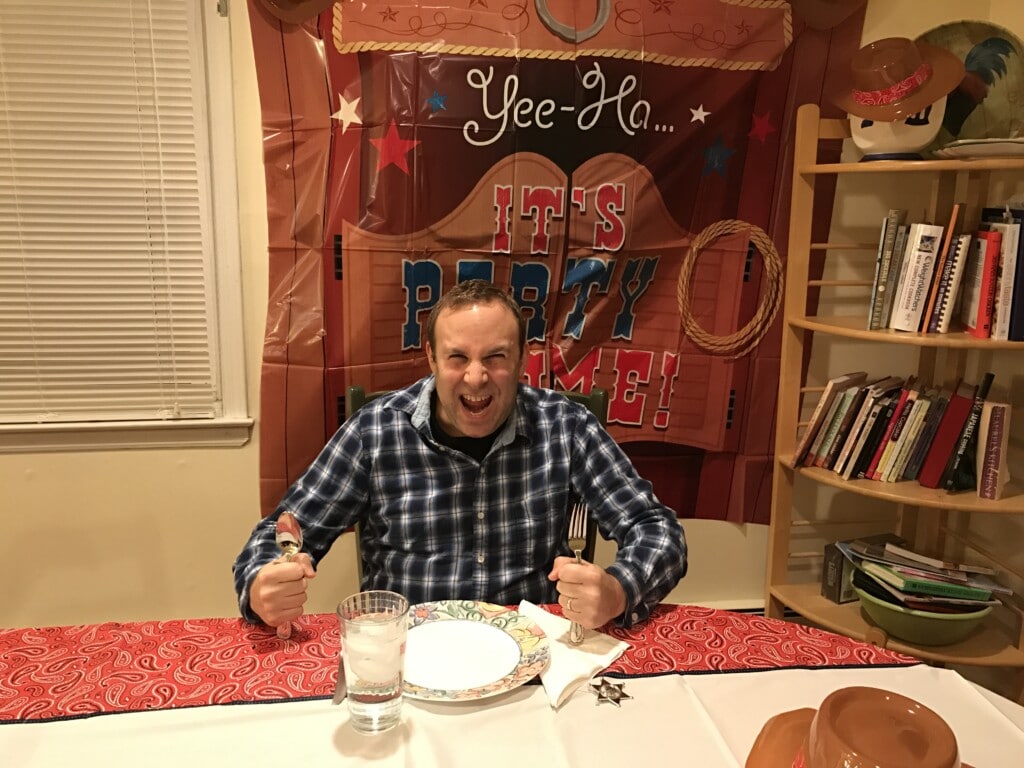 And waited… After waiting a good five minutes, I started banging the table. I was getting angry. And hungry. Yes, I daresay I was getting hangry! 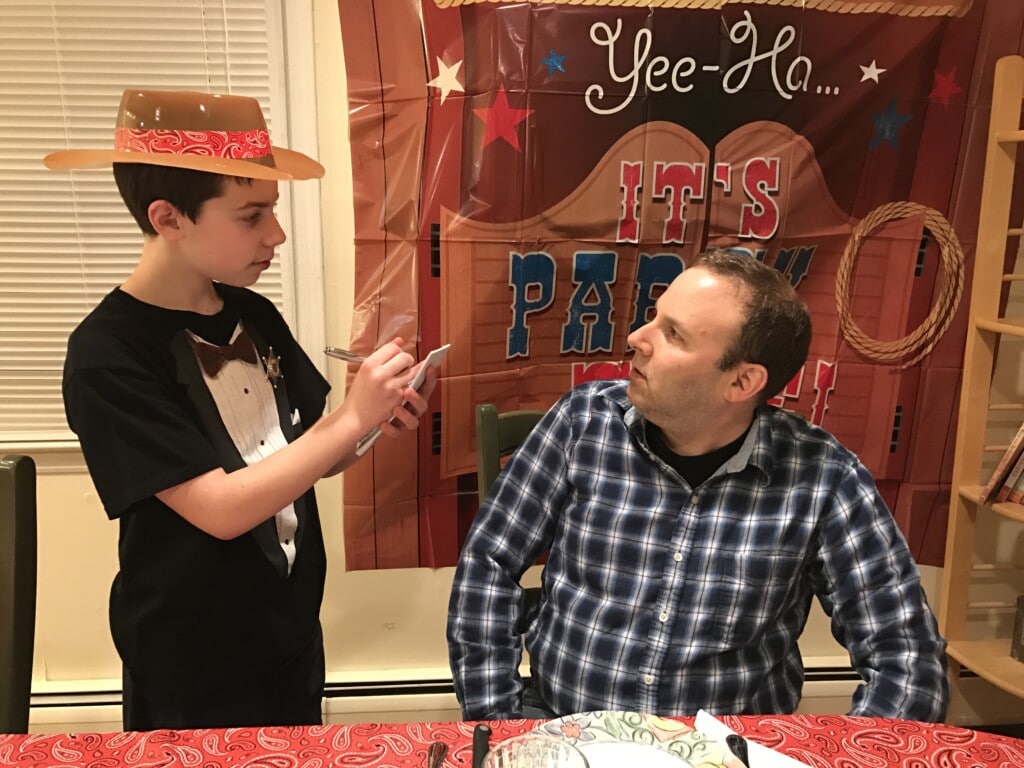 Finally, a dashing young waiter arrived to take my order. His biggest recommendation of the day was the Creamy Potato Soup. Hard to argue that one! 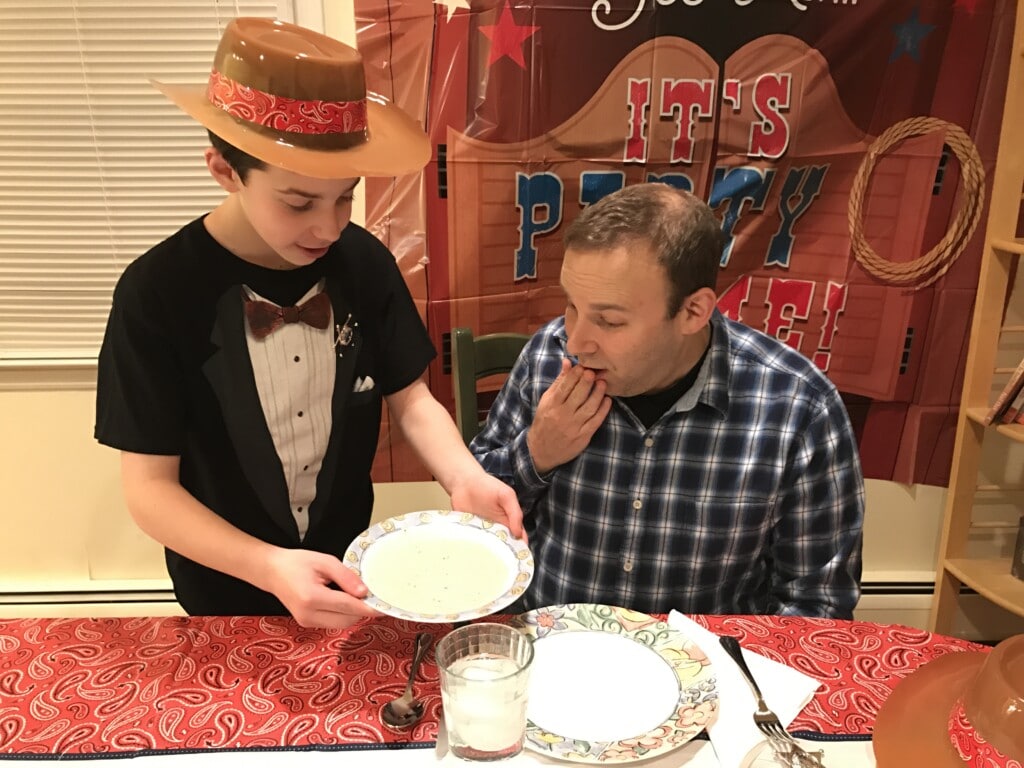 After a very short wait, my talented waiter named Ryan brought over the bowl of Creamy Potato Soup. The smell was driving me mad. The whole place just  gave off the best aroma of… well… of creamy potato soup! 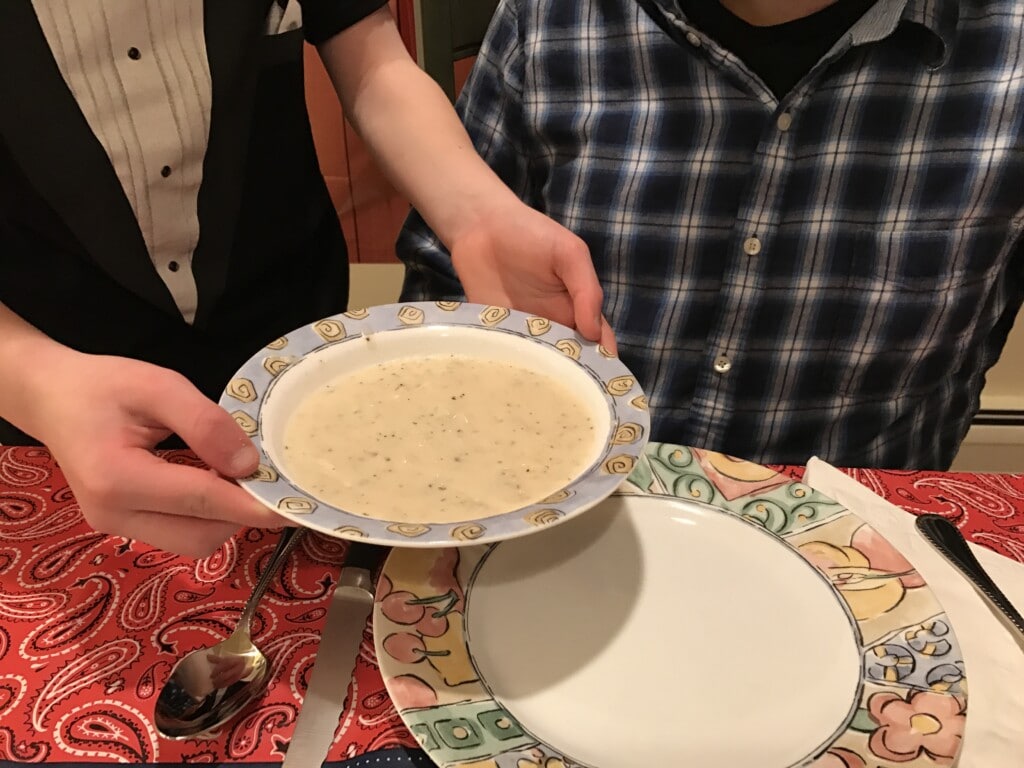 Just look at that soup! Real chunks of potato make for the perfect texture. 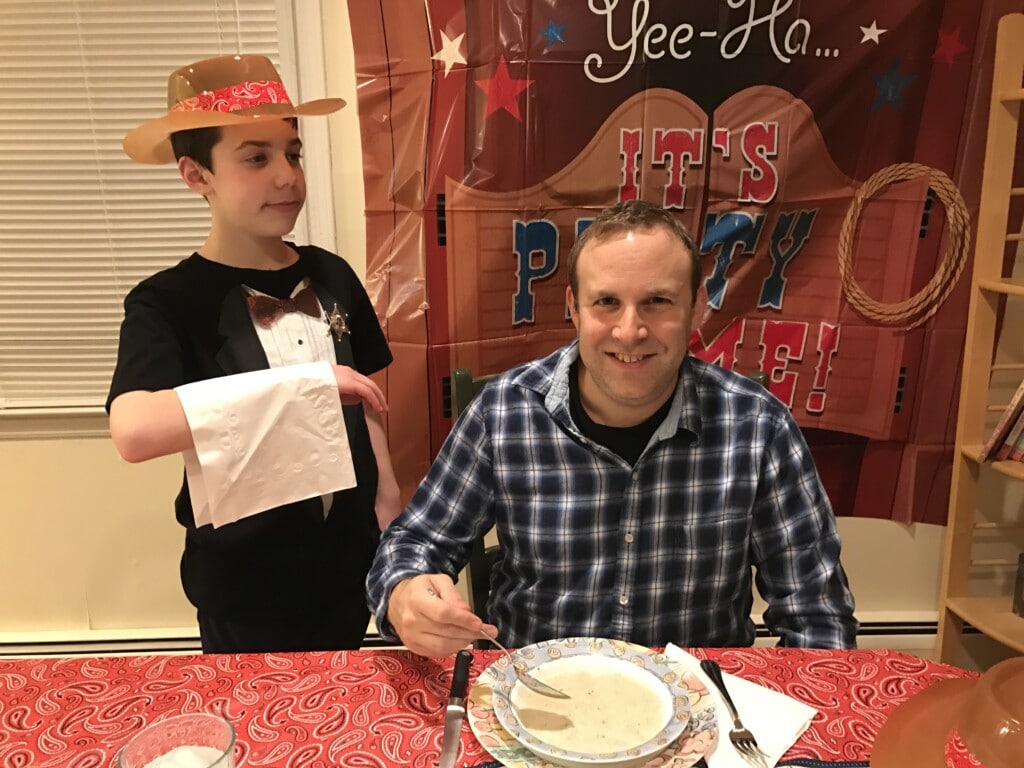 Waiter Ryan took a step back and waited to see if I needed anything else, while I took my first taste. 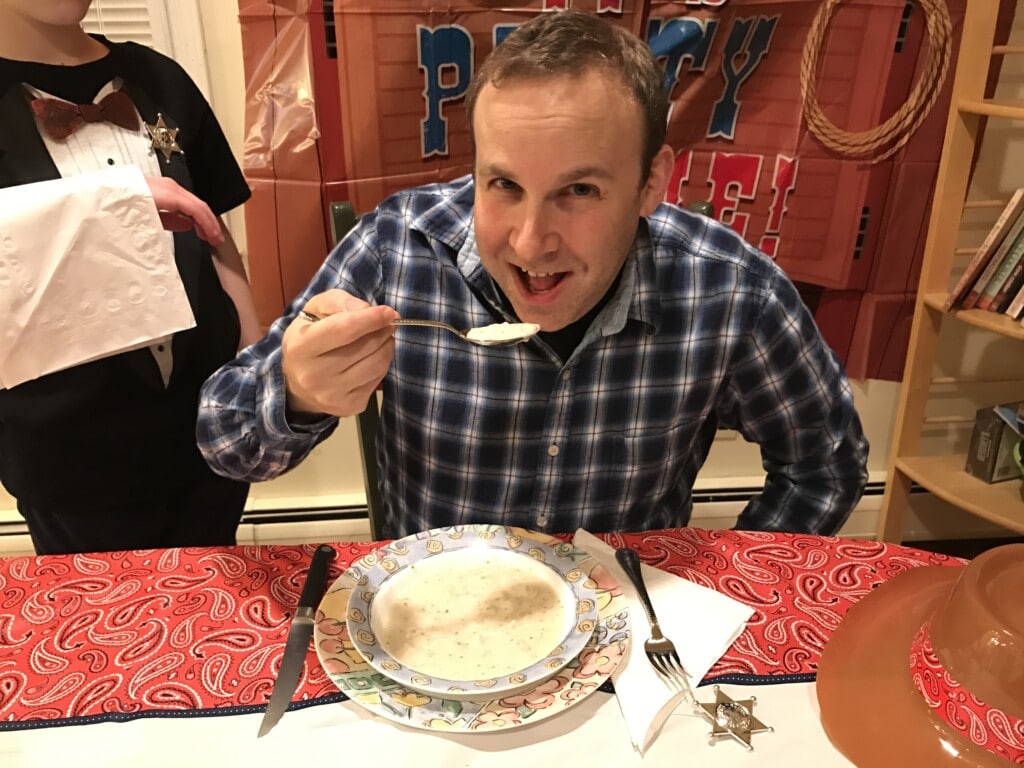 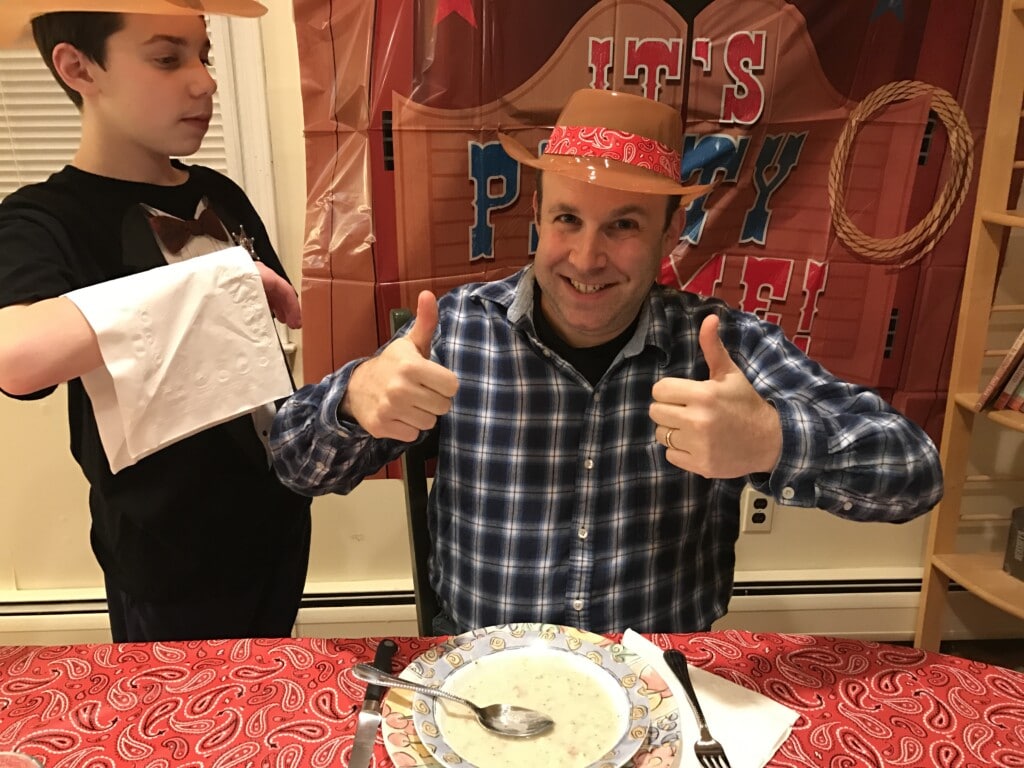 Well, howdy!!! Y’all won’t believe it but this soup is sooooo tasty it turned me into an instant cowpoke right like that! 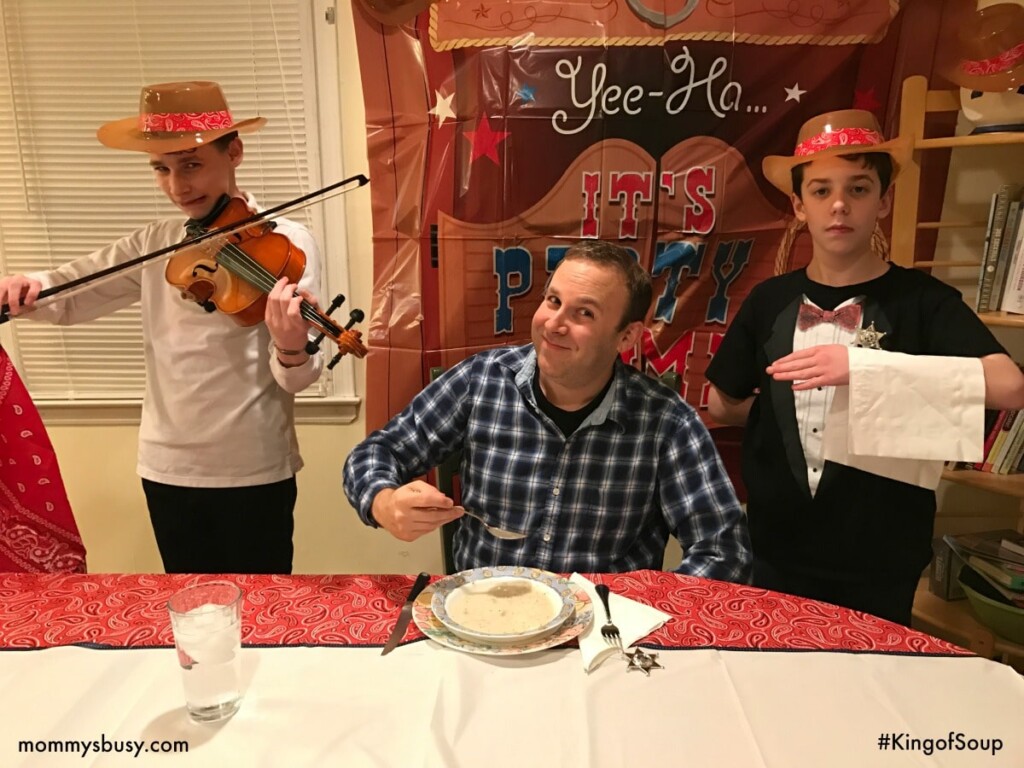 As an added touch, the Mommy’s Busy Go Ask Daddy Steakhouse even has some real musical accompaniment. Musician Jason fiddled some tunes for me while I enjoyed my creamy potato soup all under the watchful, stone-like eyes of Ryan.

I think it’s pretty clear that after some help from Idahoan® Premium Steakhouse® Potato Soups, you can just go ahead and crown me the true #KingofSoup! Don’t be fooled by other wanna-be kings (i.e., dads who think they’re the #KingofSoup just because they whipped up some creamy steakhouse soup without a single fly in it) and instead feel free to sing my praises.

If you’re lucky, I’ll even consider making a royal decree to create a National Steakhouse Soup Day! Just be sure to stock up on Idahoan® Soups now, so you can celebrate properly. Your king will most certainly approve. 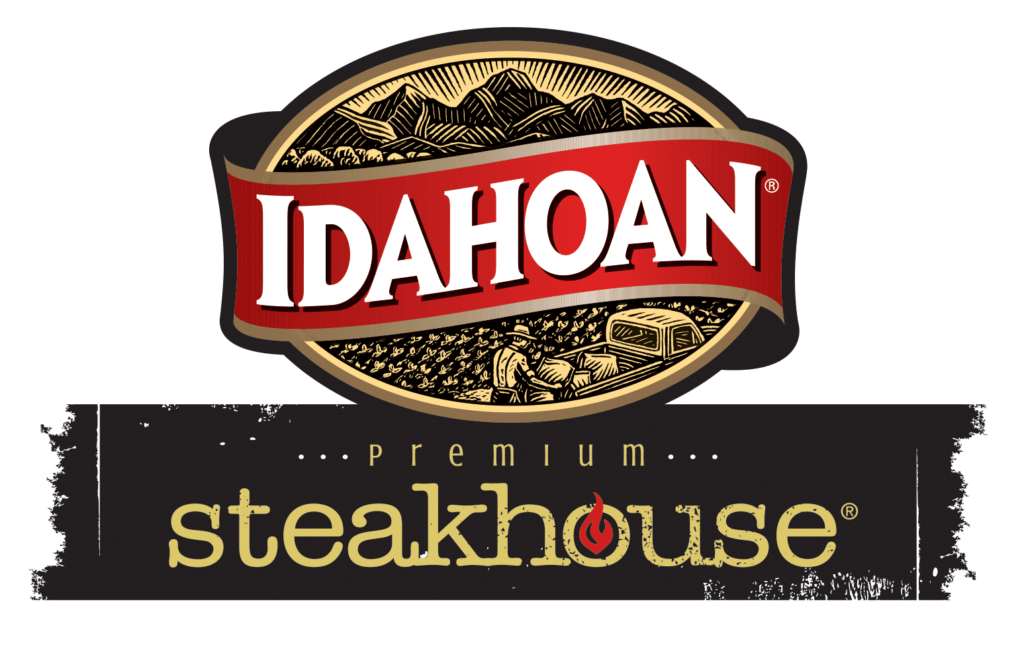 5 thoughts on “The #KingofSoup Transforms Our Dining Room into a Steakhouse!”