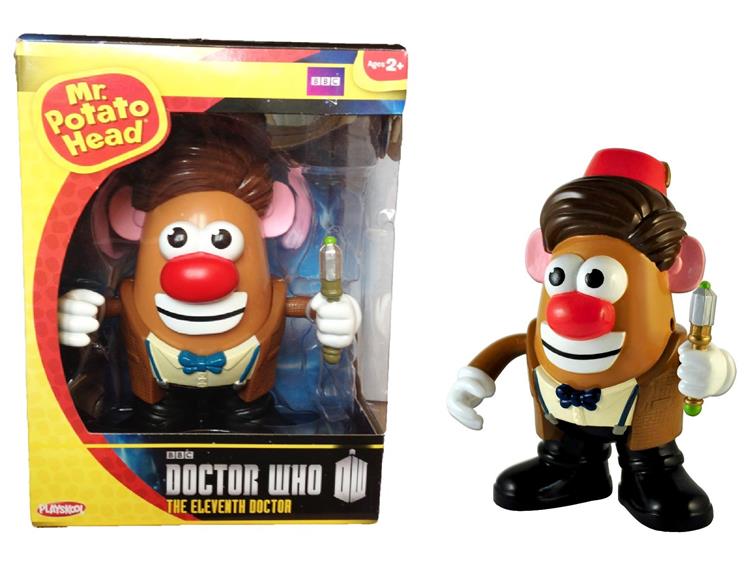 I’m sorry, I know this post is going to tick off a large fraction of Geektopia (including my blogging bud Alison), but I have to say it. The new Doctor Who Mr. Potato Head toy is… well, pretty lame.

I’m not a fan of the old Doctor Who series. My friend Dave based his entire life on that show and even wore one crazy colorful scarf all throughout college. I prided myself in constantly pointing out how absolutely perfect that show was at figuring out a way to make science fiction and time travel a yawn fest.

But the more recent Doctor Who series, which kicked off with Destro himself, Christopher Eccleston, was no longer a reincarnation of that tired old show. Yes, the special effects were still pretty damn cheesy, but the story lines and acting were stepped up considerably. I loved the 9th doctor and hated David Tennant’s 10th doctor at first.

But then Tennant stole my heart (cue the doves) and I actually ended up liking him better than the 9th Doctor. Of course Tennant’s tenure also ended too soon and the bowtie wearing Matt Smith entered as the 11th Doctor. And, well, I’m still waiting to like this guy.

I’m not going to go on and debate the merits of which Doctor is best. And no, I am not completely caught up to the latest season either, so I will certainly give Mr. Smith a fighting chance.

But look at that Mr. Potato Head doll. It’s based on Matt Smith’s 11th Doctor. Which means it’s a Mr. Potato Head with a bow tie. I honestly cannot think of a more boring toy in the universe. Even a pet rock has more personality.

I know these are clearly geared at collectors but really? A potato with a bow tie? At least he’s got his sonic screwdriver, although a sonic potato peeler or masher would be more appropriate, don’t ya think?

Which Doctor is your favorite?

6 thoughts on “The Doctor Who Mr. Potato Head Toy is One Sad Spud”