I’m not happy. Not one bit. And it’s all thanks to Verizon Wireless.

I’ve complained about Verizon Wireless before. That was in regards to ridiculous, unnecessary fees. I still stand by that post. But this time, it’s a totally different issue and I feel like I’ve been part of one big phone scam.

Let me walk you through what happened…

The iPhone 6 went on pre-order and I didn’t bat an eye. Yeah it sounded great but my iPhone 4S still worked fine. I wasn’t about to drop a few hundred on a new phone just because.

Then in mid-September I got a promotional email from Verizon basically saying that I could trade in my iPhone 4S for an iPhone 6. Interesting, I thought. 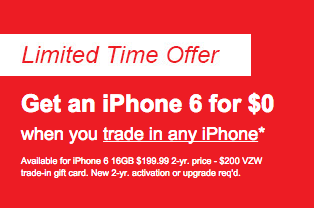 I looked into it and if I traded my iPhone 4S in (it’s in great shape), I’d get a $200 credit from Verizon. They were running a special where I could buy an iPhone 6 for $200, so discounting the ridiculous fees, it’s basically like trading a 4S for a 6. Okay, that I was willing to do.

So on September 19, I filled out the trade-in information for the Verizon Wireless Recycle Program on their website. It told me I would get $200 credit when I sent in my iPhone 4S. Then as I finished the last step, it gave me a popup asking if I was going to buy an iPhone 6 or not. I said yes, and proceeded to order it.

I received an email confirmation for my phone order but nothing about a trade-in. My initial thought was, they’d send that info in the future.

Fast forward a few weeks and still no confirmation about the trade-in. I did get another generic promotional email from Verizon saying time was running out to trade in your old phones for up to $200 in credit. I wasn’t sure if this was directed at me or not, so once again I filled out all the information for a trade in. Once again I never received anything.

Two days ago I finally received something… my iPhone 6 in the mail. But there was nothing about a trade-in at all. So I held off on activating it because I’m not keeping it if I can’t trade my old one in for $200.

Yesterday I chatted online with a Verizon Wireless customer service rep. He was quite friendly and completely understood my problem and frustration. Apparently he had the same exact issue himself even. He gave me these exact instructions:

“Okay, this is a some what common issue, to correct this and to insure that you are getting the promised amount you will have to call Customer Care at 800-922-0204 as they can remark the account as well as ship the packaging etc out to you.”

So I called, played the game of talking to an automated operator and never getting to the right department. I eventually gave up because I had to get back to work.

Today, however, I worked from home. I had my phone on speaker as I waited in a long queue to speak to someone at that number. It was 15 minutes before someone answered. She was far from friendly. After I explained the situation, she responded with, “Can I have your Submission ID?”

“I don’t have a Submission ID. That’s the problem here. I never got any confirmation at all from Verizon.”

“I can’t look up your info without a Submission ID.”

“Exactly. Because I never got one.”

“I’m going to have to pass you on to the Escalation Department since there is no Submission ID. Please hold.”

And I did. Literally for 20 more minutes!

Then a woman answered and once again I explained the entire story to her. She asked the same questions and basically continued to reiterate that, “I can’t look you up in our system without a Submission ID. There’s nothing in the system.”

“No, I’m the supervisor. But we don’t have a Submission ID so we can’t do anything at all.”

I then learned that the Escalation Department will get back to me via email in… oh, roughly 7 to 10 BUSINESS DAYS!

Really? I have a new iPhone 6 here I’m dying to play with but I can’t/won’t activate it until I’m positive I’m getting $200 for my old one. And now I may not even know for another two weeks?!?

I blew up at her explaining that I’ve talked online, on Twitter and on the phone for way too many hours already and now I learn that I have to wait another two weeks to even get an answer.

“Two more weeks? Can I even return my new phone then or should I just return it now?” I asked.

“I’m sorry, sir, you’ll have to speak to Customer Care about that. That’s a new phone issue. We only handle trade-ins here.”

For reals. She said that.

So now I’m trying to contact someone at Verizon Wireless to find out the return policy on my iPhone 6. And their website is a mess of cataclysmic proportions. If you want to chat in a forum, you’re fine. But try finding an easy customer service email or instant chat link.

I even tried talking to them on Twitter and didn’t get anywhere. It was less than useful actually. While I explained my problem, they responded very slowly, asking me if I filled out the forms and then… did I check my email. My email. Gee, wish I had thought of that. Or even my spam folder.

@Mommys_Busy Hmm. That’s odd! Did you check your e-mail? I would suggest checking junk / spam e-mail as well. ^YT

I can’t make this stuff up.

I’m hoping to catch the attention of someone competent over at Verizon Wireless who understands the value of Customer Service. Particularly to a real loyal customer of nearly 15 years. So do me a favor, if you made it this far, please leave a comment below and share this post on Twitter and Facebook to get Verizon’s attention. Thankya!

Have you had problems with Verizon’s Trade-In Program?

Update 12/5/14: I did contact the Better Business Bureau about this entire affair. They passed my complaint on to Verizon and I just now received this message from the BBB with Verizon’s response: “Upon receipt of this complaint, a thorough review was completed. Verizon Wireless has advised Mr. Kardon unfortunately in order to receive the $200.00 incentive; our recycling center would have needed to receive his previous equipment before the promotion expired.”

126 thoughts on “Is the Verizon Wireless Recycle Program a Total Scam?”