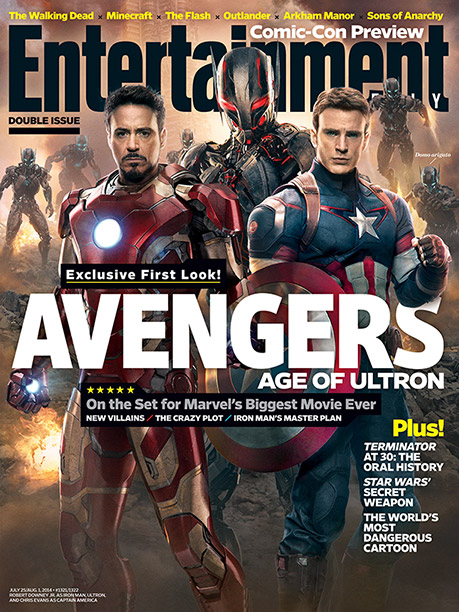 I initially spotted it on Facebook and then couldn’t stop staring at it, to be honest.

For those who don’t know who that funny looking robot guy is behind Cap and Iron Man, that’d be Ultron. The killer robot with the red eyes. If the Red Skull is Captain America’s arch enemy (which he is), then Ultron is the Avengers’ biggest thorn. He just keeps coming back, bigger and badder than before.

He’s a ruthless, vicious, killing machine. And he’s got a super mad-on for the Avengers.

Sorry, I really can’t contain myself. I so need to go pick up this issue of EW to read all about it and hopefully see more pics. In the comics, Dr. Henry (Hank) Pym invented Ultron and then, well, lotsa bad stuff happened. Pym is such an awesome character and core part of the Avengers in the comics. He was the original Giant Man, Ant Man and Yellowjacket. Then he went a bit nutso in the comics. I’m really hoping he starts showing up in the movies soon.

As for Ultron’s movie origins, I wasnt sure what was going to happen until I read EW’s Who is Marvel’s angry, metal Avengers: Age of Ultron madman — and why does he hate you? Great read if you want to know Ultron’s backstory in the movie. I won’t mention it here in case you don’t want any spoilers.

Earlier this year, I had the honor of attending the #CaptainAmericaEvent in L.A. where I saw an early screening of The Winter Soldier (sooooooo goood!), and met the entire cast. I can only hope the awesome Disney/Marvel folks invite me out again for a similar Avengers event. (Ahem. Hint. Hint.)

Of course, I’m always open to early set visits as well. Heck, I’ll even volunteer myself to play an extra in the film, say victim #176 in Ultron’s quest for World Domination! Just sayin’.

7 thoughts on “Excuse Me While I Mop Up This Drool Over EW’s ‘Avengers: Age of Ultron’ Cover”