I’m a guy, so I don’t think I’ve ever really had a bad hair day. Personally, however, I’ve probably had a Bad Hair Life.

I can remember back to high school when my hairline actually started receding and my bald spot first reared its ugly head. But despite all that, I’ve never had to worry about my hair getting too frizzy or too flat.

Women, on the other hand, don’t just have to dress for the day’s weather, they apparently need to prep their hair too. There’s just oodles of shampoos, conditioners, gels, sprays, irons, you name it, all to keep those locks tamed.

Or… you can just go with the flow and have a truly Bad Hair Day. At least that’s what Leigh-Allyn Baker and Laura Marano did.

The two star in the Disney Channel’s latest TV movie event Bad Hair Day which airs on the Disney Channel TONIGHT (February 13 at 8pm). You may recognize Leigh-Allyn from her hilarious role as drama queen mom Amy Duncan from Good Luck Charlie. And Laura makes up the much prettier (and way smarter) half of Austin & Ally.

As part of a 3-Day Blogging Adventure tied to the #McFarlandUSAEvent, I was lucky enough to interview Leigh-Allyn Baker, and catch an early screening of the film.

Laura Marano plays Monica, a high-school tech genius who somehow balances building websites with working the crowds to become Prom Queen. The movie starts off on the day of the Prom, and that’s when everything that can go wrong for Monica does.

From a ruined outfit to the absolute worst Bad Hair Day ever, Monica goes from an extreme high to a ridiculous low in the blink of an eye. Everything takes a bizarre turn, however, when Liz (Leigh-Allyn Baker) steps into her life, all in the name of hunting down a jewel thief and a valuable lost necklace.

From there, the movie takes off on a hilarious and non-stop ride as Liz and Monica find themselves attached at the hip as they each offer the other a means to reach their immediate goals. Leigh-Allyn Baker not only starred in the film, but executive produced as well. While she plays a more straight-laced character than the overly dramatic Ba-BAM known as Amy Duncan from Good Luck Charlie, she still manages to bring the laughs.

I really enjoyed the on-screen chemistry of Leigh-Allyn and Laura. They start off pretty much despising each other, which leads to some pretty comical scenes including Leigh-Allyn licking a photograph… but as the story unfolds, so too does the understanding between these characters.

Austin & Ally’s a big hit in our house (and for the record, I have two boys), so it was nice seeing Laura play a bit of a different role here. She was equal parts girly girl and super smart tech genius.

Sweet, sensitive and full of laughs, Bad Hair Day was a real nice surprise for me. I could instantly tell that my whole family will love it and I know a number of scenes that will have my boys totally cracking up.

If you’ve ever had a Bad Hair Day yourself, chances are it wasn’t even close to the one Monica had. So grab some popcorn, let down your hair and snuggle up with your family as you all  enjoy this (sorry) hair-raising adventure. 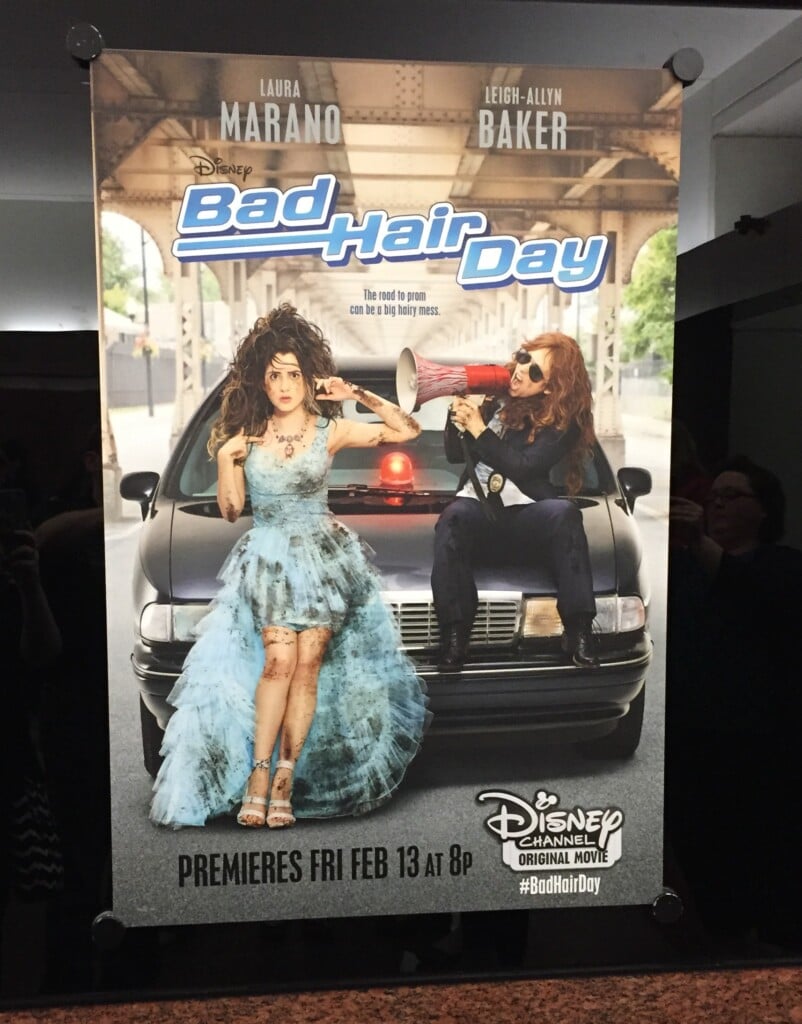