Movies are always more fun with a crowd. For some reason it’s just easier (and more enjoyable) to let loose and laugh when you’ve got your buddies nearby.

Me? I go one step further. I get the stars themselves to join me.

Okay, so maybe I had a “little” bit of help but on my recent #McFarlandUSAEvent Blogging Trip to L.A., I had the sincere pleasure of previewing the Disney Channel’s upcoming movie Bad Hair Day.

It stars Leigh-Allyn Baker (the downright hysterical Amy Duncan from Good Luck Charlie!) and Laura Marano (the adorable Ally from my wife’s favorite Austin & Ally!). Baker played double duty on this one, as she also executive produced the film.

Oh, and she happened to sit down right next to me. For the entire screening.

Yep, Leigh-Allyn Baker and I are #BadHairDay Buddies! Want proof, just check out her tweet to yours truly:

I’ll  be putting up my review of Bad Hair Day later this week. (Spoiler Alert: It’s pretty darn funny! The movie, not the review.) Besides laughing at various parts of the movie, I found myself laughing a lot at Leigh. She was cracking herself up watching herself on the screen. It was pretty surreal and totally hilarious.

Apparently she totally enjoyed her time with us as much as we did with her.

After the screening, Leigh took some time (almost 45 minutes!) to chat with our blogging crew of 25 and answer any of our questions. She even followed that up by posing with every single one of us individually for photos.

Sweet. Funny. Talented. That’s Leigh-Allyn Baker, someone who clearly loves the spotlight. (Trust me, she’s not too far removed from Amy Duncan at times!)  Dressed in a grey Mickey Mouse shirt, Leigh sat comfortably in a red director’s chair, at the front of the small screening room.

As she reminisced about the film, sharing personal anecdotes, one thought continued to race through my mind. “I hope my hair looks okay.”

What was the inspiration behind the movie?

Well there was a script that was originally taken to Disney Channel. It was quite different from this but it was a teenage girl and a male cop. What I hear from Disney Channel is that they thought if there is an adult, we would like to try something new.

So really then that’s when the inspiration started forming on what we wanted to do with this movie. First and foremost, we wanted to make people laugh but secondly it was really important to us to grab people’s heartstrings and give a really good, unique and powering message.  As you can see I feel like this film is fraught with comedy and heart and great messages for girls.

When you read the script, what made you want to get more involved in the executive producing role?

As my husband said, they’re finally gonna pay you to micromanage everybody else. [LAUHGS] It was very tempting to see if I had it in me to see something built from the ground up and to really be brave and put my vision out there. I just wanted to see what other creative elements I could bring to this.

What was the most fun part of shooting?

All of it was really fun. This movie was a ride to make because it was done in 22 days. That was a legit car chase, people. Twenty two days. It was not an easy task.

I would say the most fun was just ad libbing. It was the first time Laura Marano and I worked together but we hit it off so well. We had such good chemistry. You could see in the bloopers when she’s riding with me in front of the bicycle and me laughing maniacally. What you don’t see is the three people that she’s almost run over. Like seriously, I’m in the seat pushing people out of the way. It was hilarious. It was such a funny day.

How did you ultimately decide to go with Laura Marano as the lead?

There are so many talented young actors in this town but Laura Marano has a certain maturity and skill set that I think was really necessary. We needed a girl who could pull off being in the lead for prom queen and Miss Pretty Perfect, and also pull off knowing how to work that computer and have the smarts and the thinking and the brain stuff going on. Laura came in and she just knocked it out of the ballpark.

What’s the worst bad hair day you can remember having?

When we did the promos for this. They turned me around in the mirror and I was like, huh, irony. Wow.  Yeah, that would be it.

How much creative liberty did you have?

When that camera’s rolling and I’m standing in front of it, I have all the liberty I can handle. There’s nothing they can do at that point. I would say that after working with Disney Channel for five years, they have a lot of trust in me and I have a lot of trust in them. So it allows me quite a bit of liberty. They gave me a lot of freedom and yet there were times where I was afraid to push the envelope and they were like no, go.

They encouraged me. Go further. Where can you go with this, you know?  Not just with my performance or with the comedy but with story development, too. They were really willing to push the envelope on this one.

We shall see. I would like to develop my own series and I’m working with another gentleman my age who used to be on the Disney Channel to hopefully develop a show.

Would you want to stick to the same comedy and Disney?

I love comedy. If I’m gonna be away from my kids working, I’m gonna be having fun or I’m not gonna do it. And, as you can see in this I can do drama. It’s easier than comedy, way easier. But comedy just fills up my bucket and why I go to work and laugh. Who wants to go to work and cry? 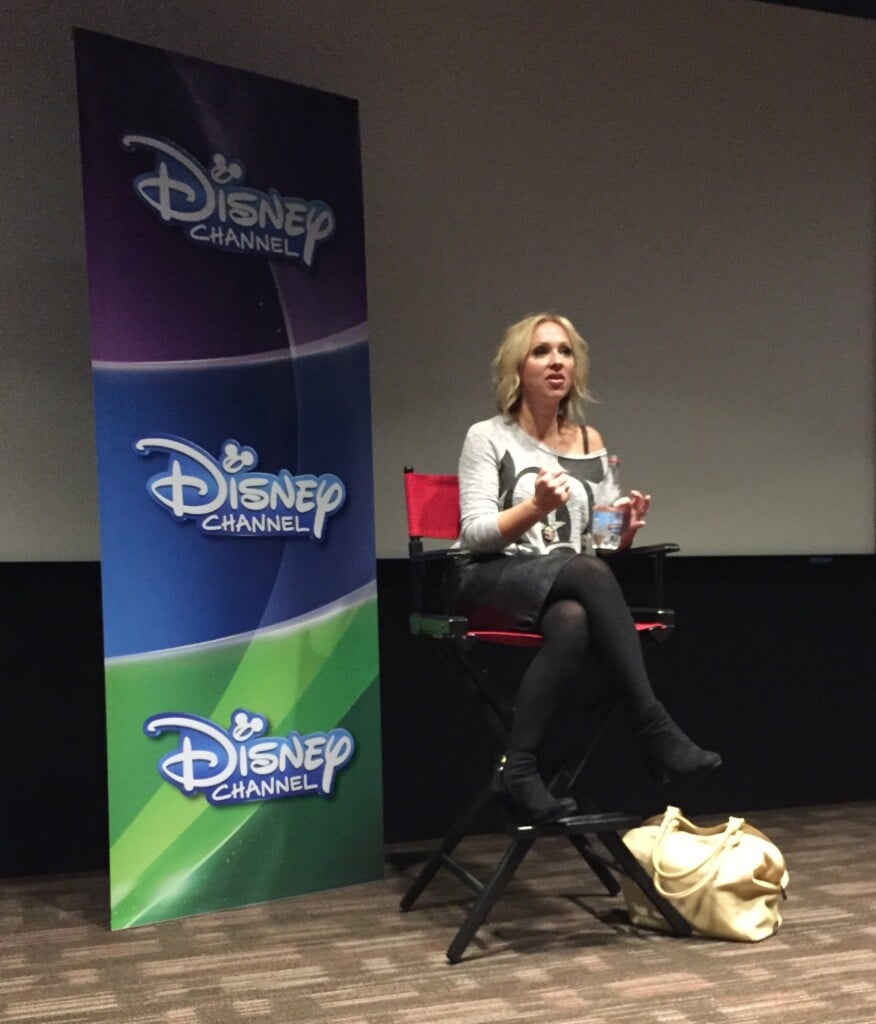 Do you put a lot of yourself into your characters?

Absolutely. I’m a little bit embarrassed to say that about Amy Duncan’s behavior. [LAUGHS] But yeah, Amy Duncan is really my most feminine side and then Liz is really me at home. I mean I have two boys. I know how to get down and dirty. It’s just really fun for me to show that I am an actor and I’m not a one-trick pony. I can do other things. That is one of the things that really intrigued me about this. How different can I show myself? Wash all the makeup off, change the hair, put some schlubby clothes on and go to town.

How do you balance the kids at home and work?

I learned that in season one of Good Luck, Charlie. I remember going to work and just missing my baby. I just had a baby, Griffin, my oldest and I remember missing him terribly all day. When I got home, I was rocking him to sleep at night, my favorite part,  and I remember looking at him and thinking, “Oh, I can’t believe I missed that at work and I should have been focused.” And I realized I’m not a hundred percent at work and I’m missing the enjoyment there, and I’m not able to be a hundred percent with him here. I’m missing the enjoyment here. From there on, simplicity ruled.

When you’re at work, you’re at work. When you’re home, you’re home and that’s how  you do it. That’s the only way I can do it.  And I love doing sitcoms. Honestly, as far as acting goes, there is no greater job for a mom in the acting world than half hour multi-camera sitcom work because you actually have a life. There’s a regular schedule. You don’t shoot crazy odd hours except for one day a week. You shoot three weeks on and one week off. You get a five month hiatus in between seasons. I mean I know what it’s like to be a full time working mom and I know what it’s like to be a full time stay at home mom.

You talked about there being several messages from this movie for young girls. What’s the one message you would like them to take away from this movie?

Your identity, who you are comes from the inside. It doesn’t come from what’s out here. That’s the main message I think. You know, a lot of people like to toss around, “Believe in yourself” but it’s more than believing in yourself. It’s knowing yourself and being okay with who you are and not looking for approval from others and knowing when to call for backup.

Has your son seen the movie yet?

He has seen clips of the movie. He thinks everything I’m in is the most boring thing under the sun.

In fact his quote to me one day was, “You being the Good Luck Charlie girl is the worst thing that ever happened to me” because it was his first day at kindergarten and all these kids started swarming me and he was like, oh, bummer. There are certain times my kid doesn’t wanna share me with the world. But then I explained to him that we don’t actually have to wait in line at Disneyland and he was like, “Oh, I love you being the Good Luck Charlie girl.”

Did you grow up wanting to do this?

I think it was about five or six months ago that I was like oh, my gosh I’m doing that. I’m making kids laugh. I cannot complain and sit back and groan that I’m an adult in a teenage world because the fact of the matter is this is exactly what I wanted.

February 13 at 8pm on the Disney Channel