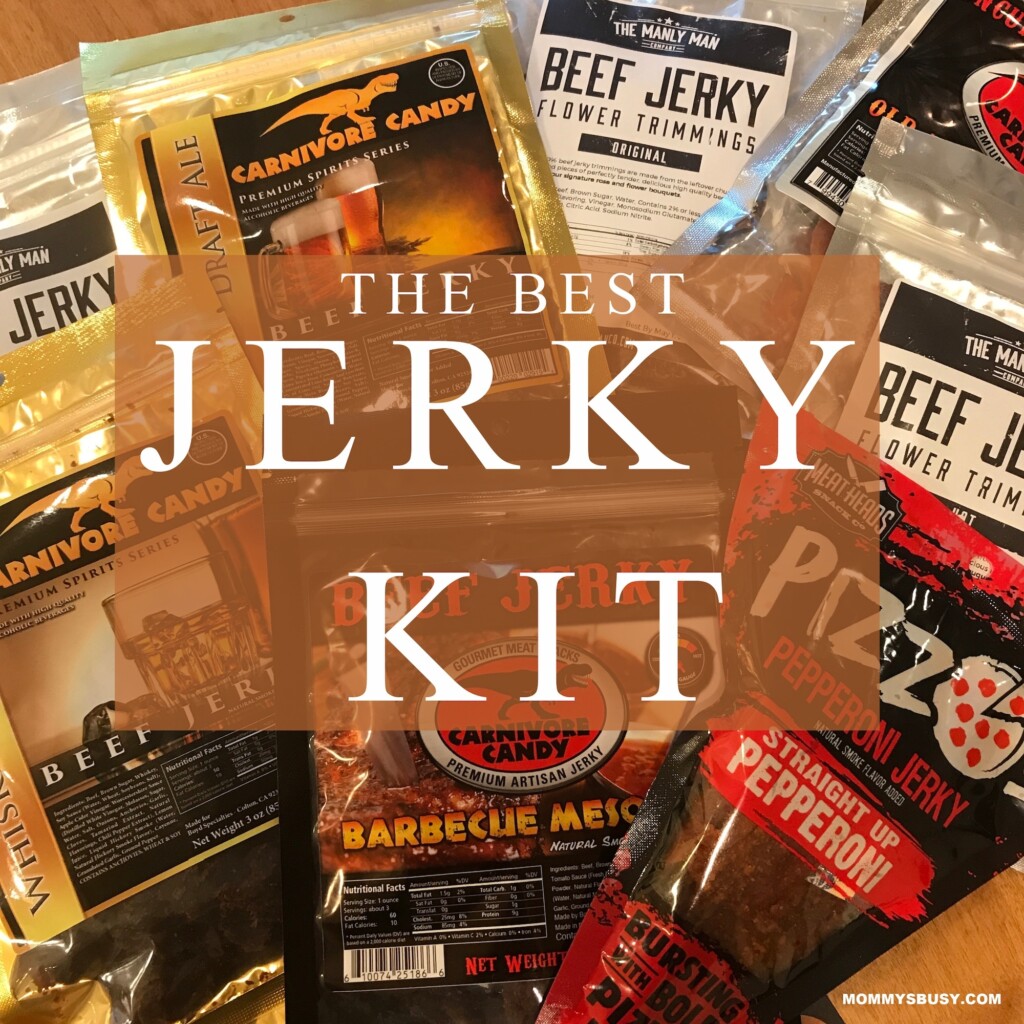 I still remember the worst thing I ever put in my mouth.

I was working at Wizard Entertainment, a publishing company that put out all sorts of magazines about comics, toys and pop culture. We were mostly 20-something guys that loved superheroes. Yeah, imagine a frat house made up entirely of geeks. That was us.

Anyways, we often received gifts from clients and companies and for some reason, one day we ended up with a whole bunch of jerky. There were ostrich jerky sticks. Gator jerky bits. And then… well, then the most horrifying two words I’ve ever seen combined…

Yes, it was jerky made of oysters.

Never one to shy away from a food dare (or in this case, a Triple Dog Dare), I agreed to give them a taste. Out of an office of nearly 30 guys, only one other man was brave enough to join me: my buddy Mel. He’s probably the nicest guy you’ll ever meet. A big teddy bear of a friend.

And on that, day we bonded like two men walking barefoot on hot coals in hell.

We both looked at each other, said, “How bad could it really be?” and then each took a big bit of oyster jerky.

As the blood drained out of of our faces, we both did the 100 yard dash in record time to the giant garbage can to spit this wretched “food” out as quickly as we could.

Saying it was vile would be the biggest understatement ever.

It truly was the most disgusting thing I have ever eaten in my entire life. I would rather devour an entire jar of olives (and I loathe olives!) than even lick another piece of oyster jerky in my life.

Thankfully, that horrific moment didn’t alter my love of beef jerky one bit. And that’s why I was ecstatic when the fine folks at the Manly Man Company reached out to me to see if I’d be interested in sampling one of their Manly Gift Baskets.

“Will blog for food,” instantly came to mind and I eagerly awaited the arrival of my Best Jerky Kit. 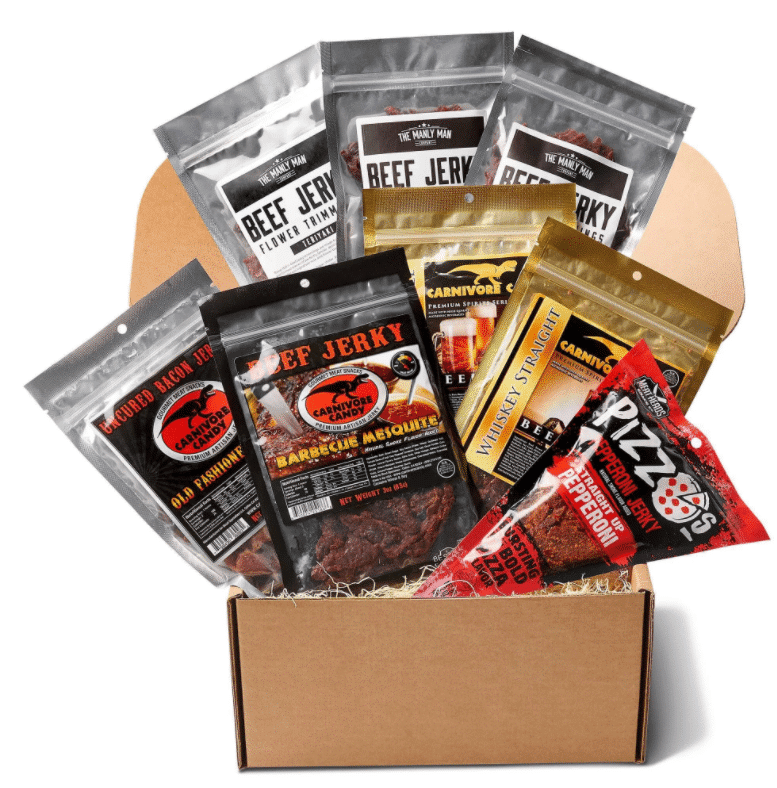 Just look at all that meat! It’s a carnivore’s lifeblood!

Packed with eight different types of beef jerky, I couldn’t wait to sink my teeth into this blog post for sure. 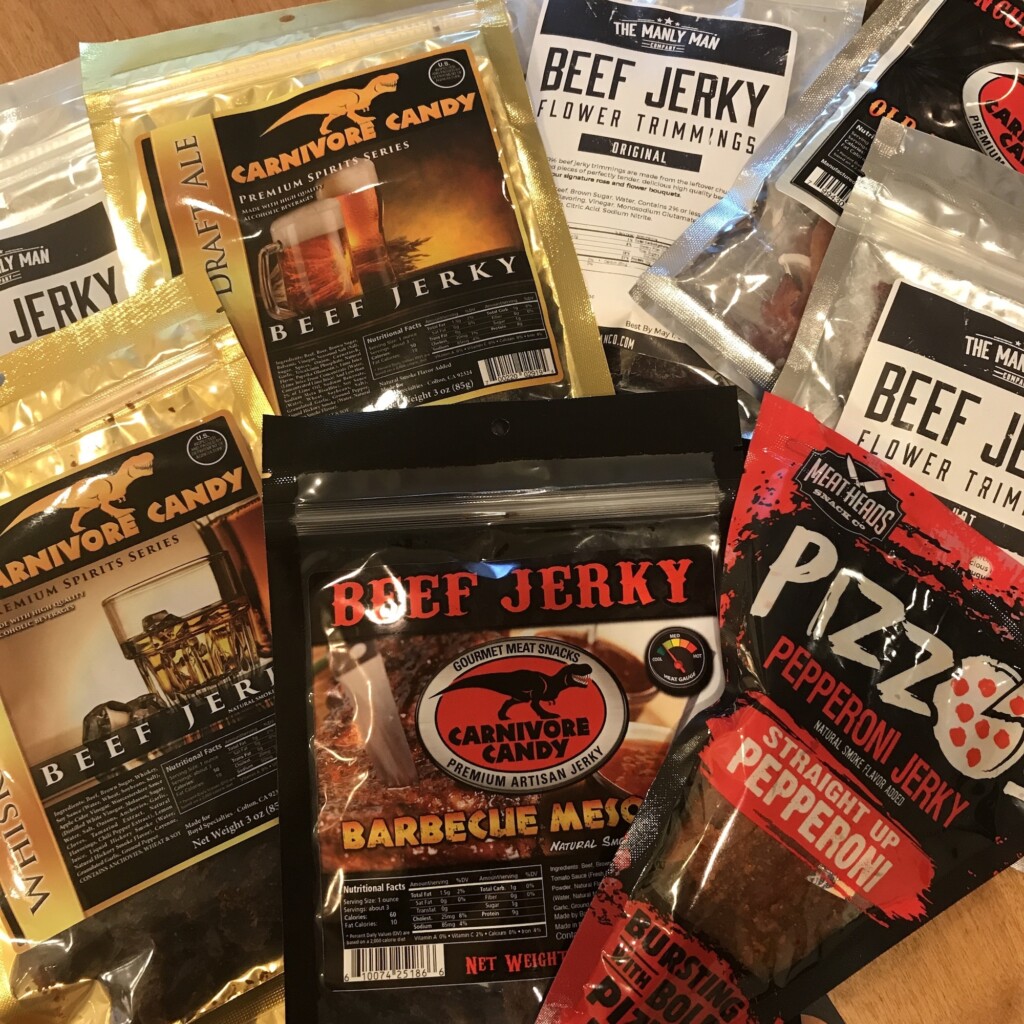 So what’s in this bad boy of beef?

I’m not one to handle too much crazy spice but I do like a bit of it. So I was dying to dive into all of these. 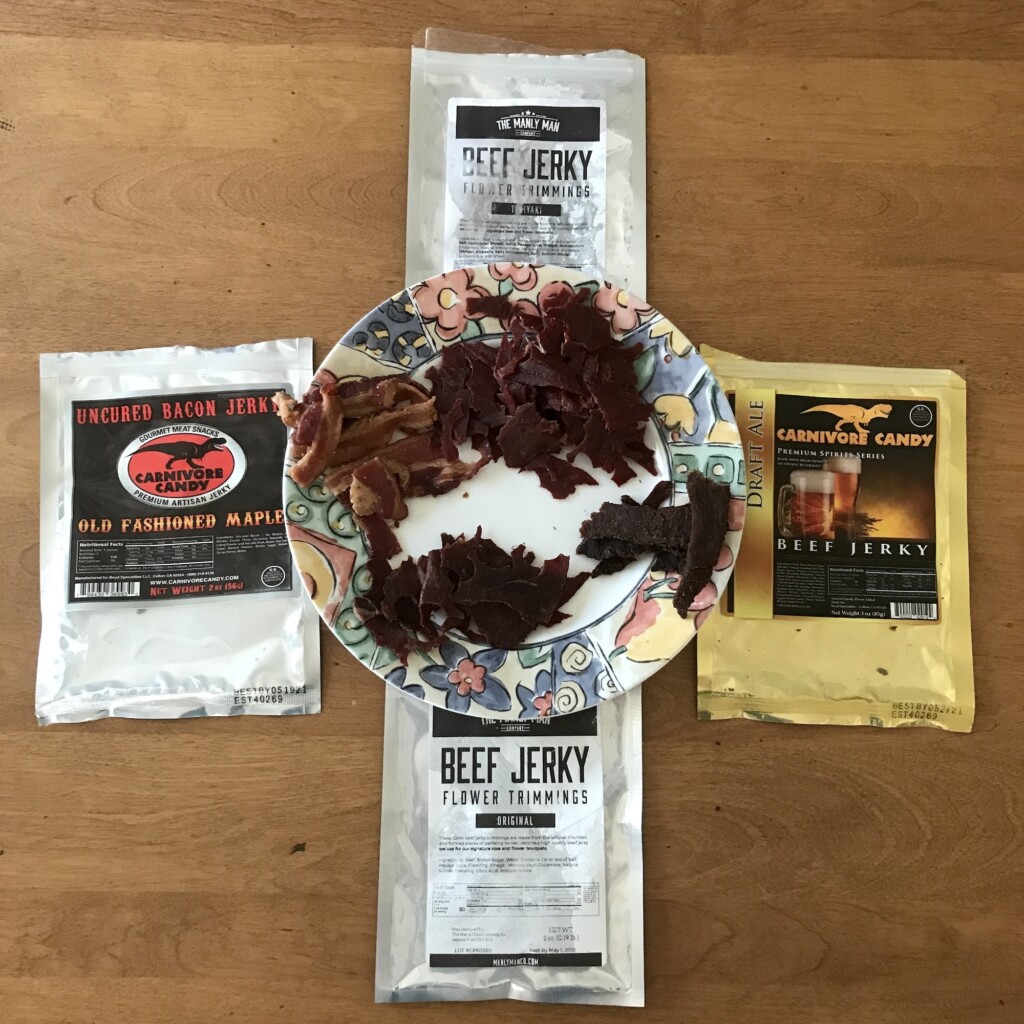 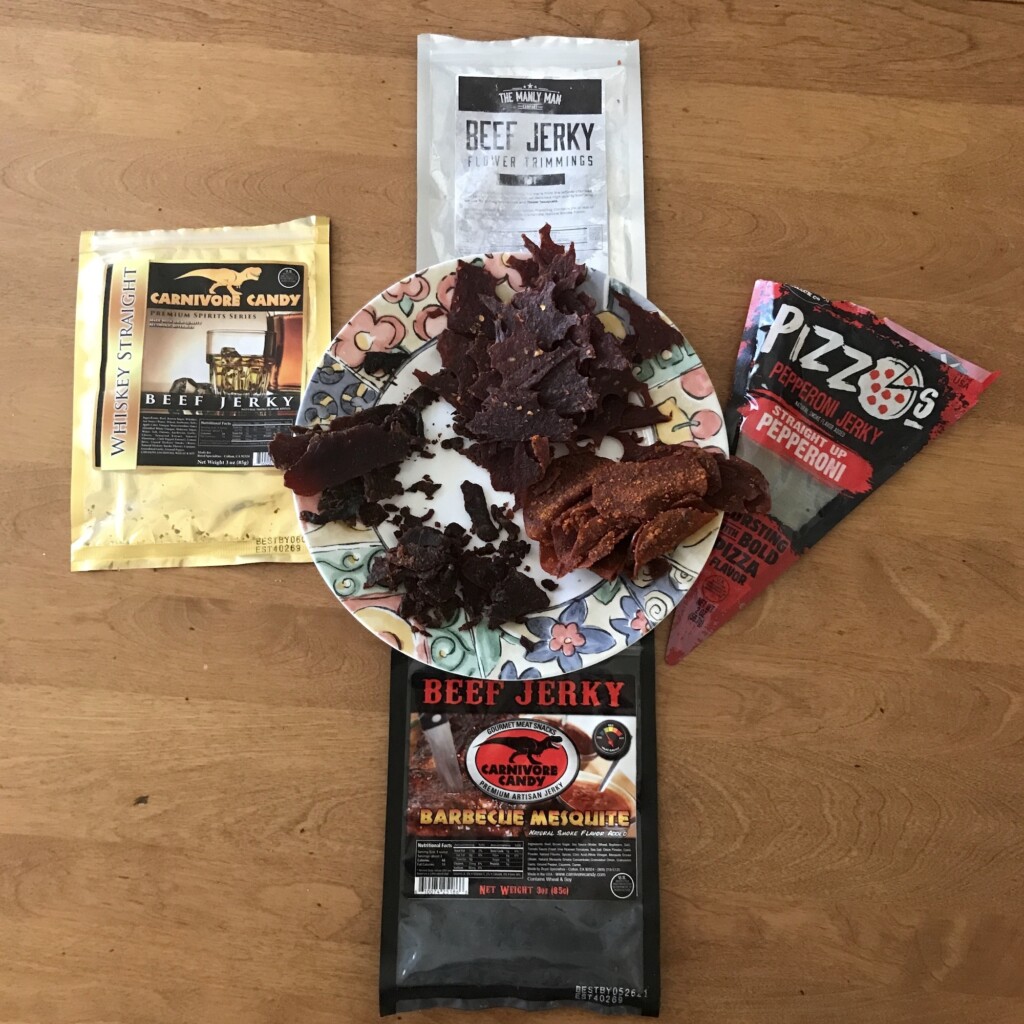 I’m a big fan of barbecue and teriyaki so I dove int the Barbecue Mesquite first. 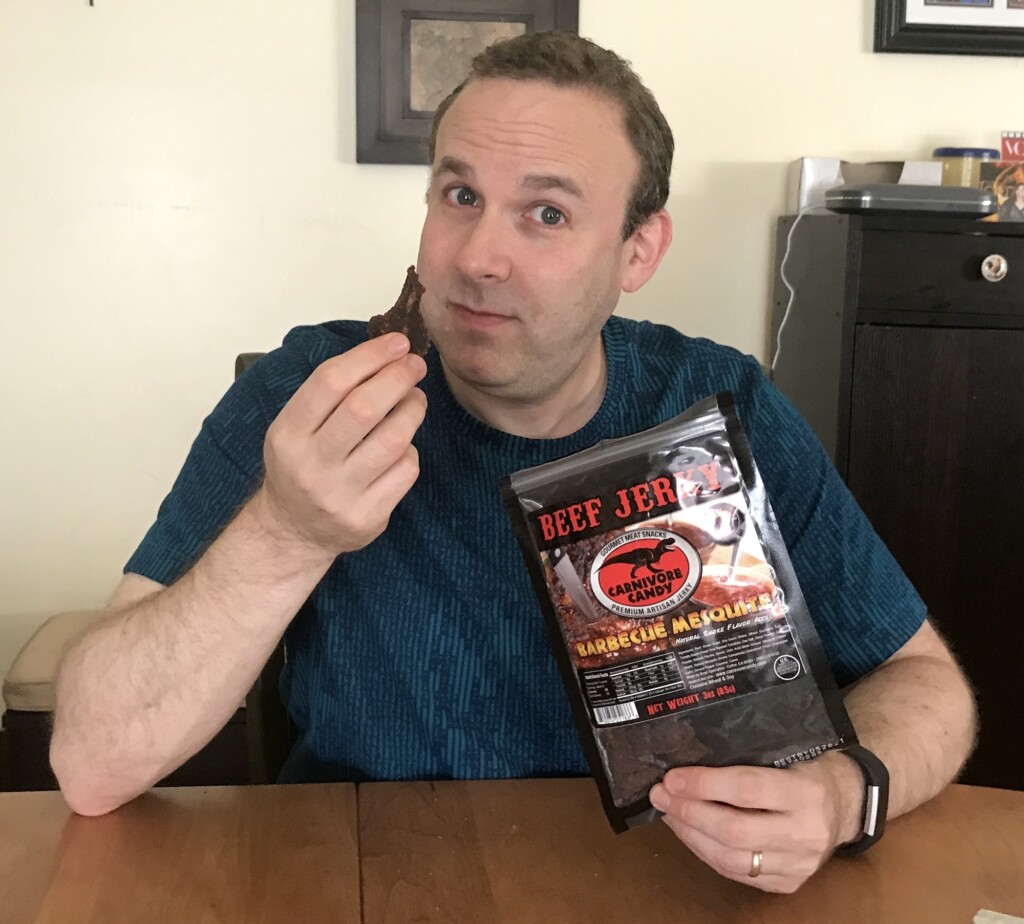 Labeled as Carnivore Candy, I have to agree. Chewy but not stringy and definitely meaty enough to sink your teeth into, I really dug the texture and the flavor was perfect. A hint of spice, but mostly a really rich smoky, barbecue flavor. 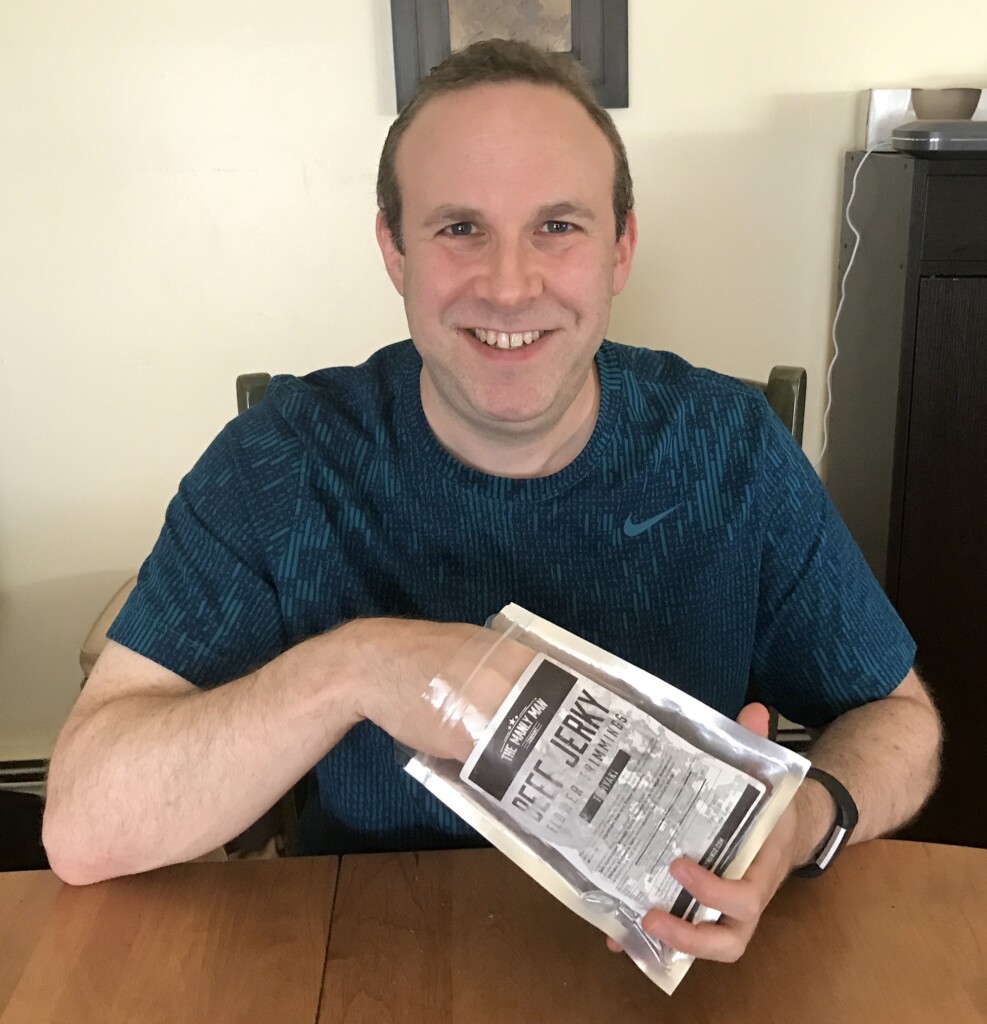 Next up,, I had to give the Manly Man Company’s own line a taste. I started with the Original Beef Jerky Flower Trimming. The taste is nice, not too overbearing and the texture is a bit different. Each chunk of jerky is very thin, which means you get a lot more in a bag like this than from say the Carnivore Candy type.

I do prefer the thicker, meatier pieces personally, but these “Flower Trimming” styles were definitely something different and I’d absolutely eat again.

For something even more different, I grabbed the Pizza slice. I mean, how much fun is that packaging to begin with?

Labeled as Straight Up Pepperoni, I have to say this one confused my taste buds. It really does taste like you’re biting into a pizza. The Pepperoni Jerky is also a bit different and it’s hard to explain. The pieces are big and it’s like taking fresh pepperoni off a hot pizza and mixing it with some thick beef jerky. I could only eat a few pieces at a time, though. It just had a super rich, almost oily, taste to it.

But the best taste test of all was the Old Fashioned Maple Bacon Jerky. 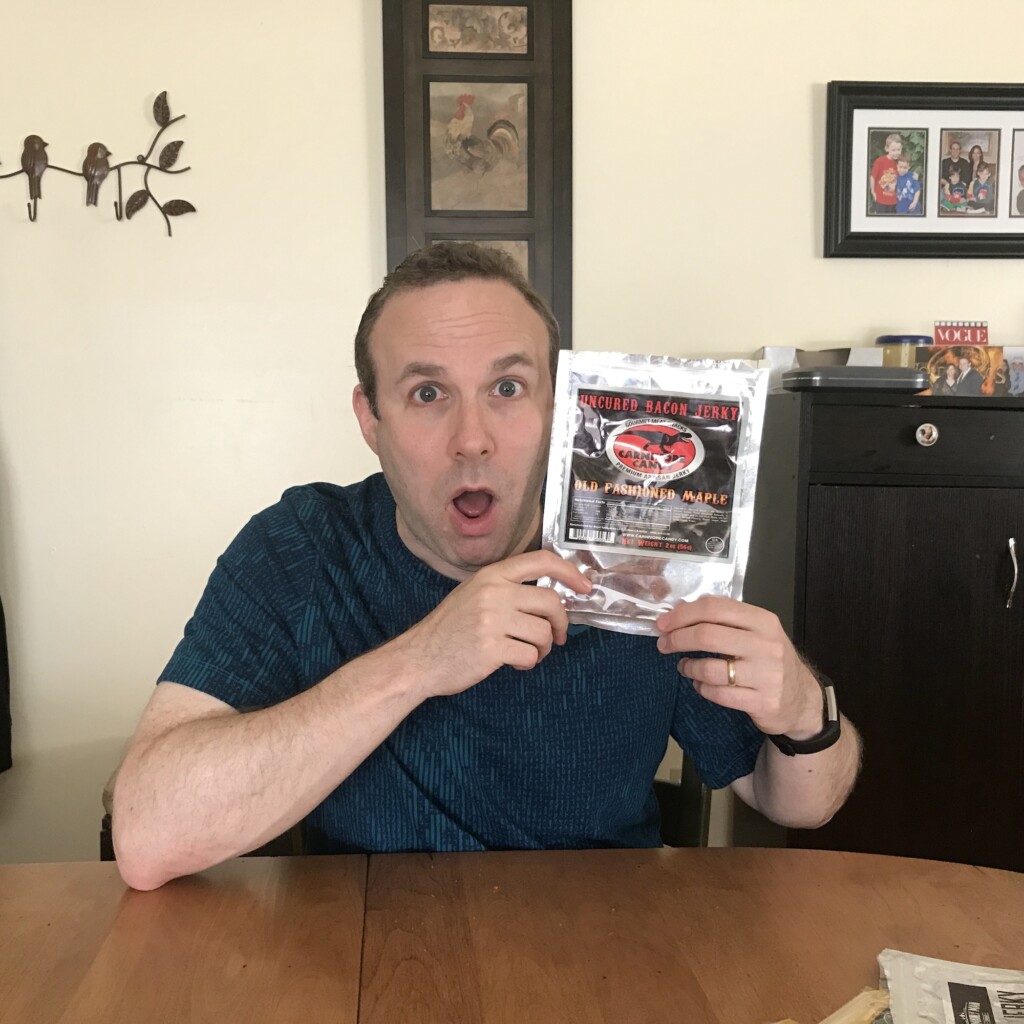 Yes, I said maple. And bacon. And jerky.

I didn’t know what to expect from this one but if you’re like me, bacon is one of those perfect foods. I love me some maple bacon donuts, so I could only imagine what this delicacy would taste like.

Would I be let down?

Would it be the greatest thing I ever put in my mouth?

Perhaps a scoop of Heaven in jerky format? 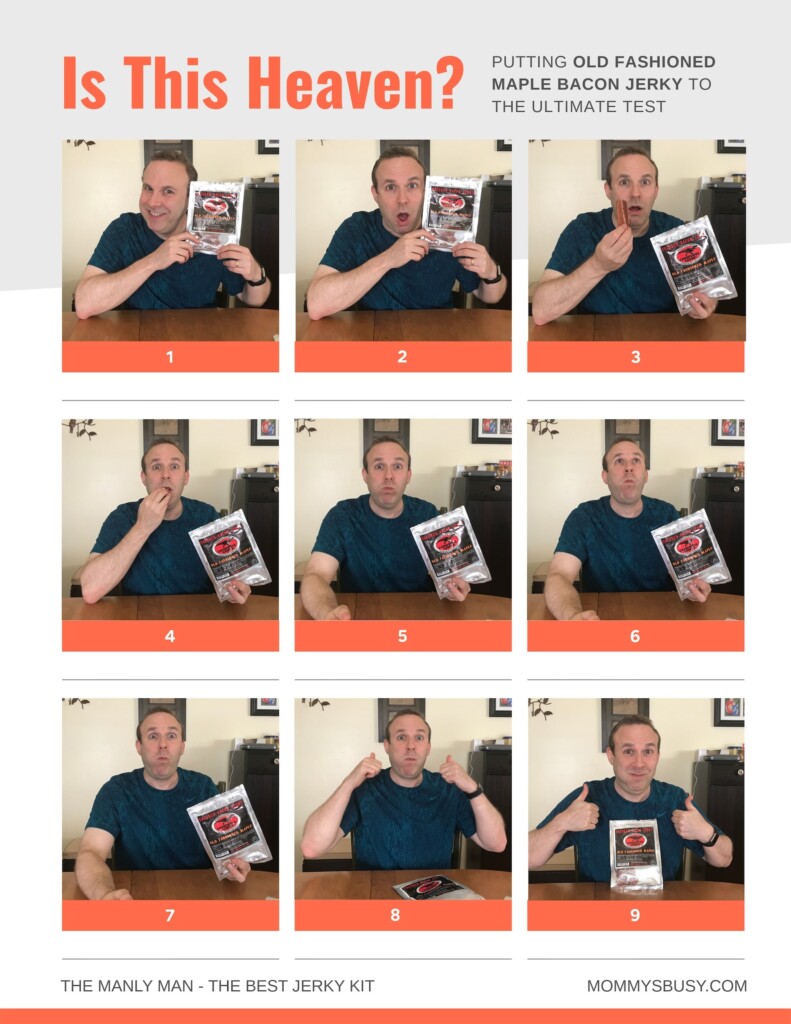 I could go on for hours about the Old Fashioned Maple Bacon Jerky, but a picture’s worth a thousand words. So 9 pictures (above) must be worth 9,000 words. And I just don’t have that kind of time to write that much.

This is sooooooooo good that it should be illegal to sell.

It’s bacon. With some maple flavor. It’s sweet and salty mixed in one, with a big heap of bacony goodness on top.

Don’t get me wrong, I really liked all eight of the beef jerky types that come in The Best Jerky Kit. They’re all a bit different, which is why it’s the perfect sampler to give as a gift.

My Top 3 favorites of the bunch? That’d have to be the Barbecue Mesquite Beef Jerky, the Draft Ale  – Black Label Beef Jerky, and then the Maple Bacon Jerky.

If you love beef jerky, or know someone who does, you owe it to yourself to check out all the different Manly Man Company Gift Baskets for Men. There are a variety of jerky themes, as well as scotch caramels and even a big meat card with your personalized message on it! 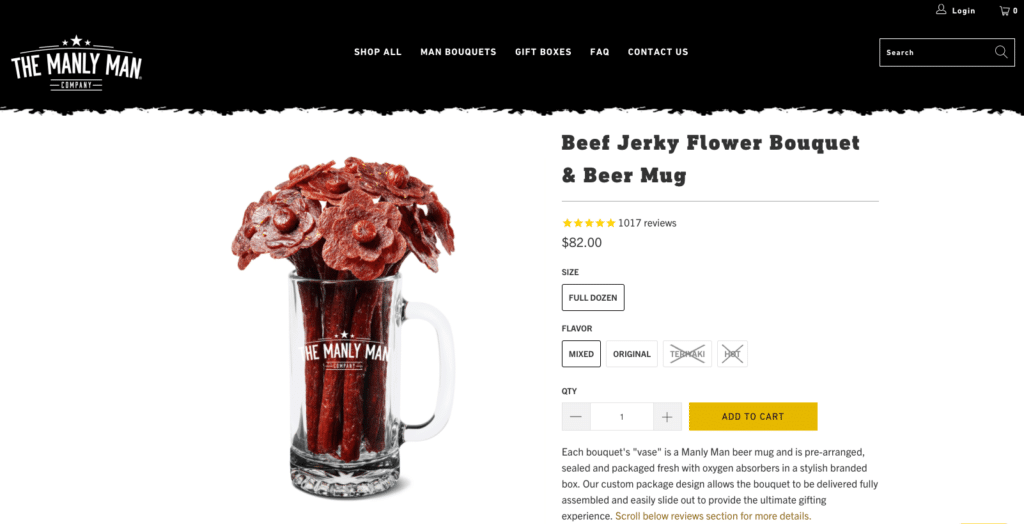 Or for the romantic meat lovers out there, how could you go wrong with a Beef Jerky Flower Bouquet?

I am completely sold on The Manly Man Company and now know exactly what I want for my next birthday or the holidays. Yes, everything. I want all the meats!

So the next time you’re looking for that perfect gift for the guy who has everything, be sure to visit The Manly Man Company. Even if he has everything, he can always use more beef jerky. Trust me, you can never have too much of a good thing.

Shop Manly Gift Baskets for Him

I received a complimentary Best Jerky Kit from The Manly Man Company for review purchases on this blog. All thoughts and opinions are my own.