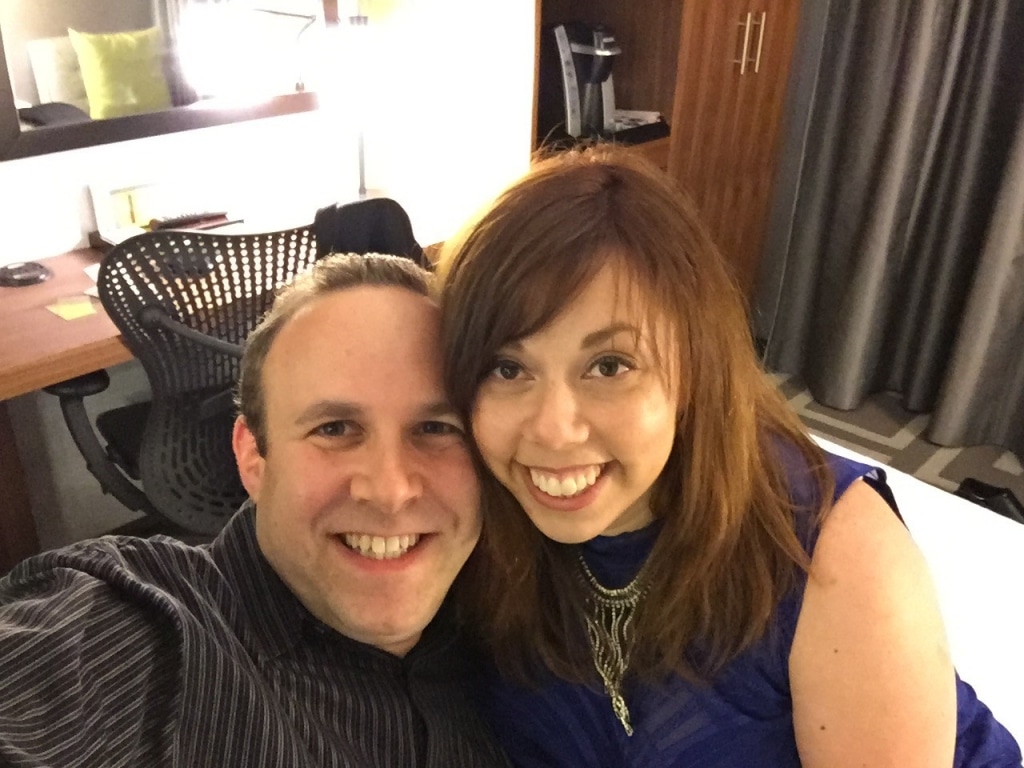 November 10, 1990. That’s the exact day I first dated the woman who would become my best friend in the entire world and eventually my wife.

Allie and I grew up just one town over from each other in the Rockland County suburbs, but we didn’t meet until we were both in college at upstate SUNY Binghamton, some three hours away.

That night, November 10 of my freshman year, we both went to a Blind Date Dance together. I had known Allie for a few months and we became friends but I was clearly too nervous to go any further than that at the time. Then our mutual friend Iris set us both up for this campus Blind Date Dance.

Allie was in on it, so she knew she was going with me. I figured out Allie was my blind date but never let on to her that I knew. So yeah, I had some fun with that leading up to the dance.

Anyways, that magical night on November 10 was perfect. It was really and truly the first day of the rest of my life. We talked and danced all night, holding hands the entire time. Afterwards, we walked around the quad a bit as a light snow began to fall. We then stayed up until about 2 or 3 am just talking. No, really! Just talking.

Why did I keep talking? Well, I was your typical nervous guy, afraid to make a move and kiss her. So instead, I just kept talking.

Eventually it got too late and I got up enough nerve for a good night kiss. So technically, our first kiss was on November 11, 1990 for those of you keeping score at home.

Flash forward to now. We stopped celebrating our first date years ago, replacing it with a wedding anniversary. But this year, I realized it was exactly 25 years since our first date. So I planned a surprise weekend getaway in NYC for the two of us.

After securing babysitters for a Saturday night (Thanks grandma and grandpa!), I planned out a full weekend in Manhattan. We’d have a nice sushi dinner, see a Broadway show and spend the night in the city. Yes, a night without kids! 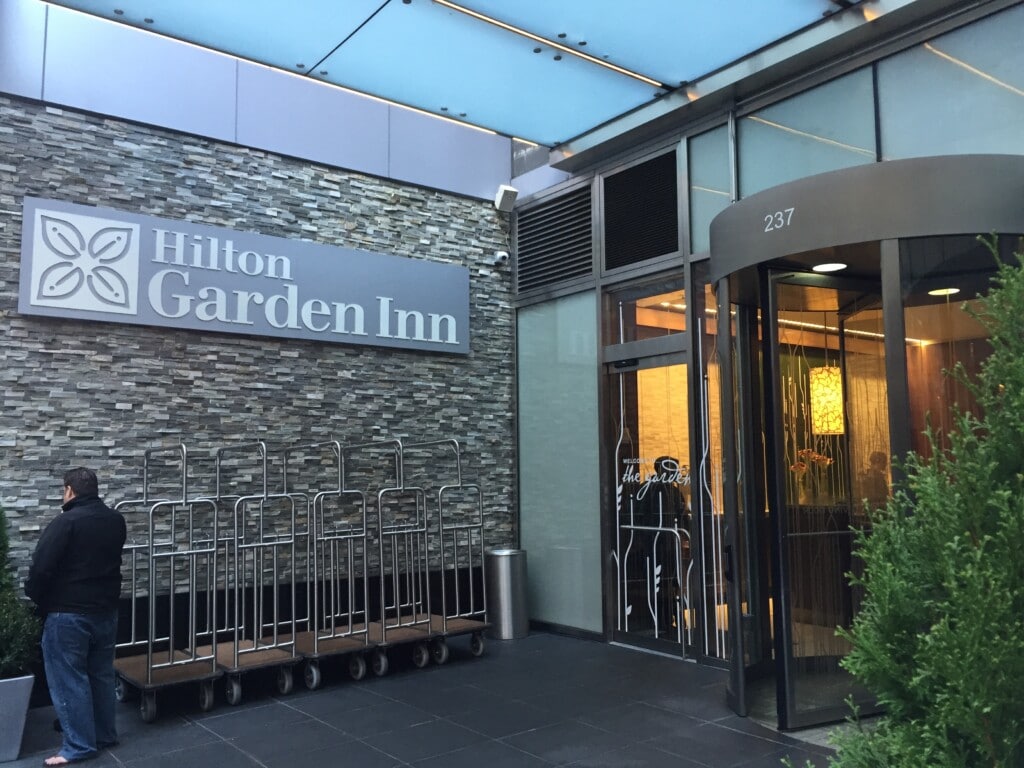 We arrived at our hotel, the newly renovated Hilton Garden Inn Central Park South around 4 pm or so. That gave us plenty of time to get settled and head over to dinner. It’s beautifully located in the heart of midtown Manhattan and is apparently the largest Hilton Garden Inn in the country. 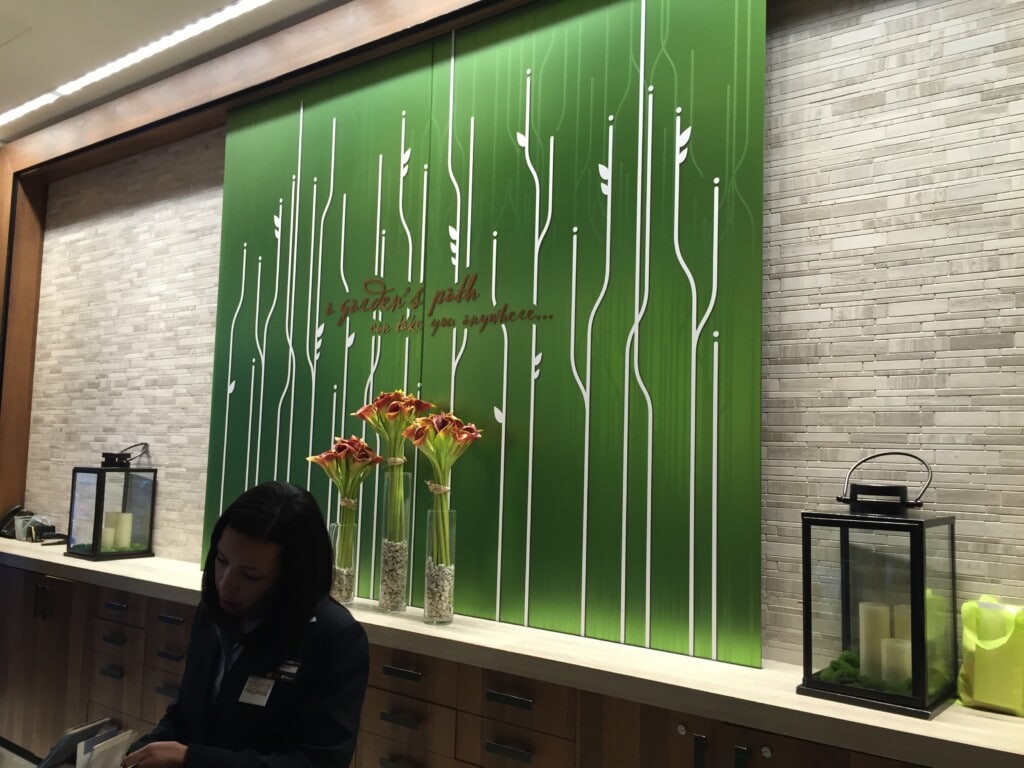 The Hilton Garden Inn clearly lives up to its name, as there’s a beautiful, nature-type feel to the place. Flowers, candles and greenery fill the lobby, quickly making you forget that you’re just steps away from the busy streets of Manhattan. 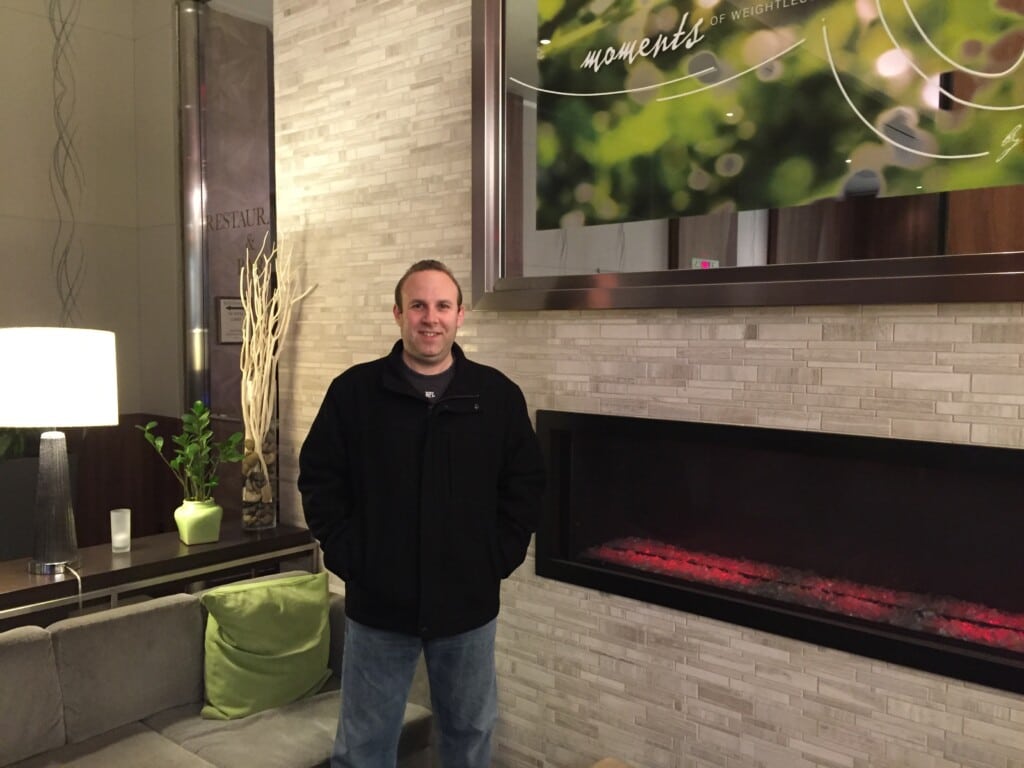 It’s almost spa-like in its style with comfy green couches, and very calming, spiritual artwork. Considering how insane NYC traffic can be, this was most certainly a welcome change of pace! 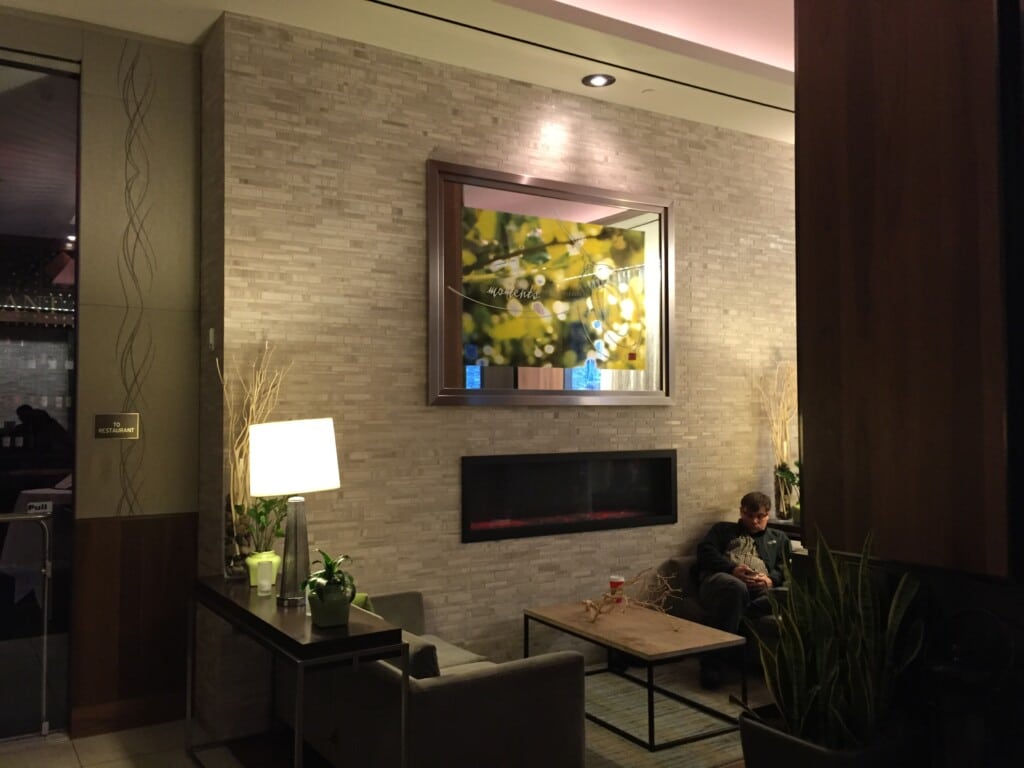 Off the lobby is also an entrance to the Empire Steakhouse if you fancy a tasty meal or just a drink or two before heading out to dinner. Allie and I saw plenty of folks dressed up for an evening out, most likely to head over to Broadway or Times Square for the night. 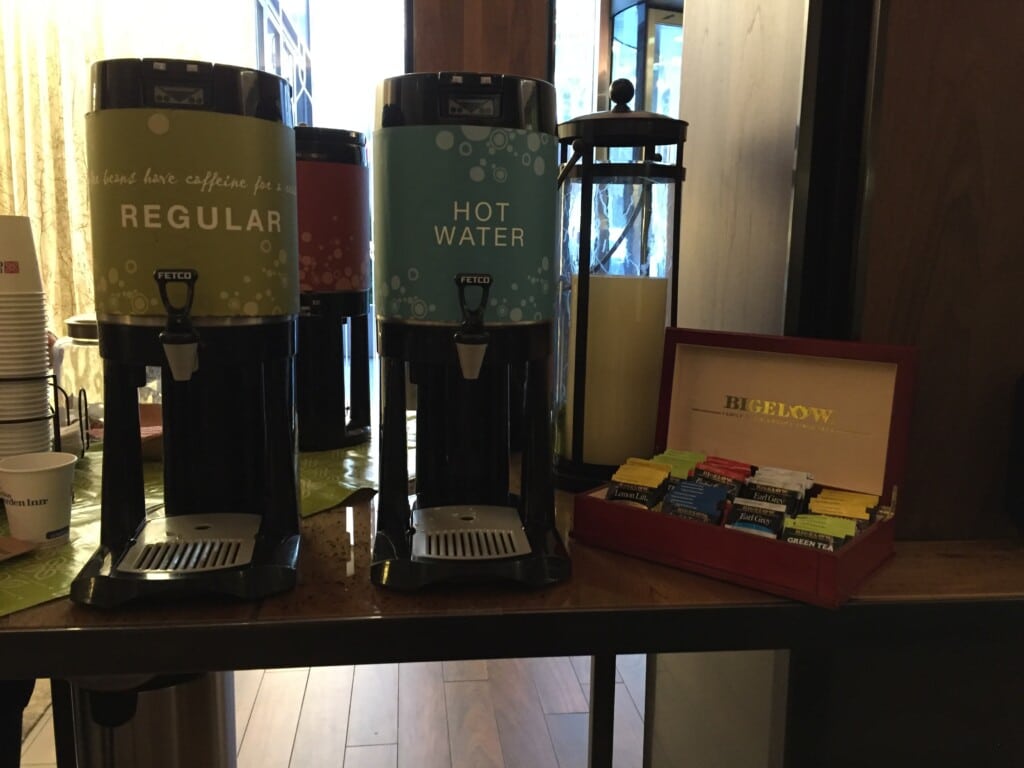 Most importantly, the lobby’s stocked with lemon water, as well as coffee or tea to keep you going. 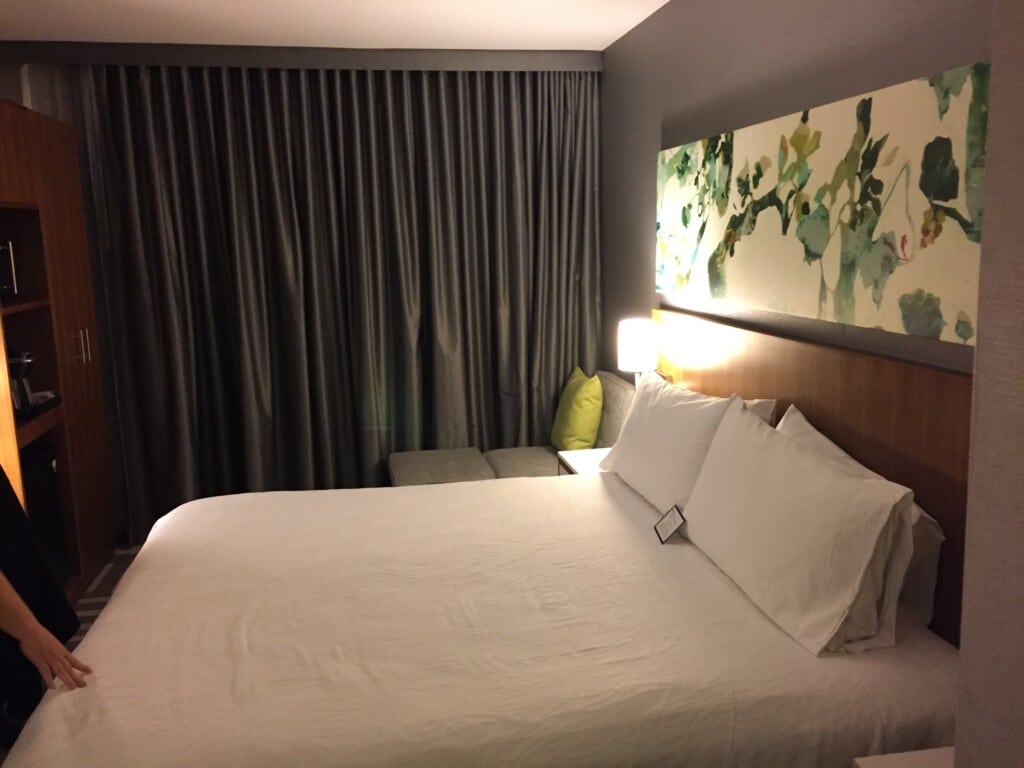 When we made it up to our room on the 18th floor, we were both surprised at how nice and spacious it was. I’ve stayed in NYC hotels before for various functions and generally, they’re real small. This one had plenty of breathing room to it, even with a nice big comfy bed. 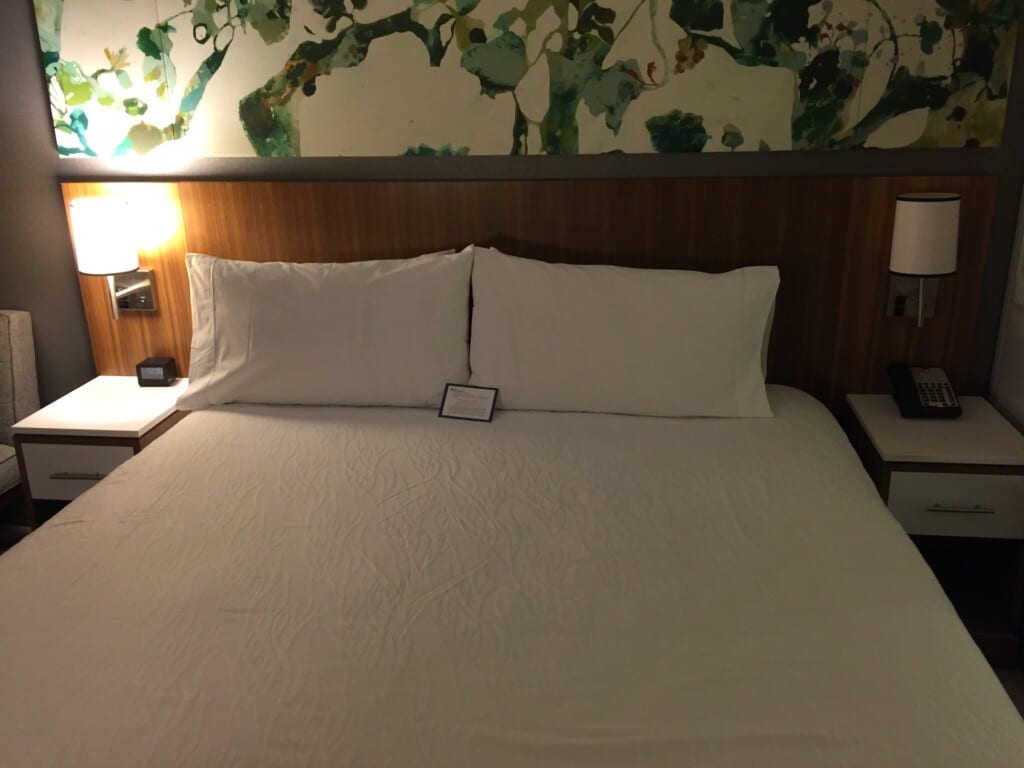 Plenty of room for us, and loads of space for me to roll over when I start snoring and Allie kicks me in the middle of the night. Also, big thumbs up to the Hilton Garden Inn for having plenty of outlets in the room, particularly by the bed. That way you can charge your phone right next to you while you sleep. 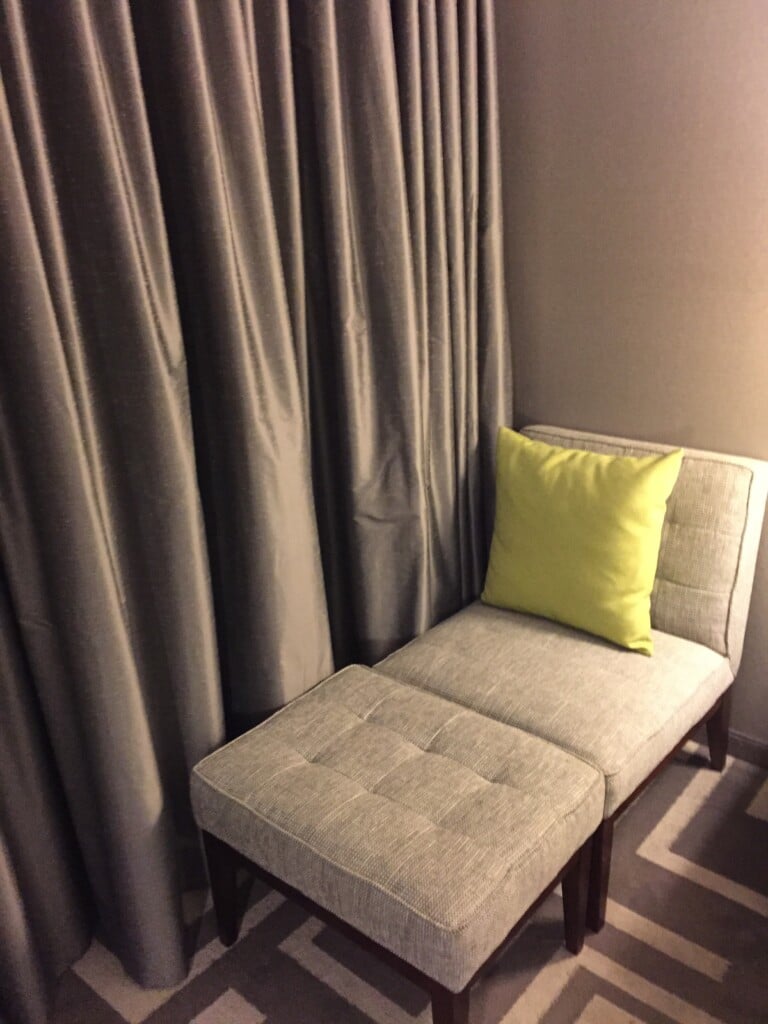 There was even a nice chair (with ottoman!) in the corner of the room to just kick back and relax or enjoy the stunning view of New York City right outside your window. 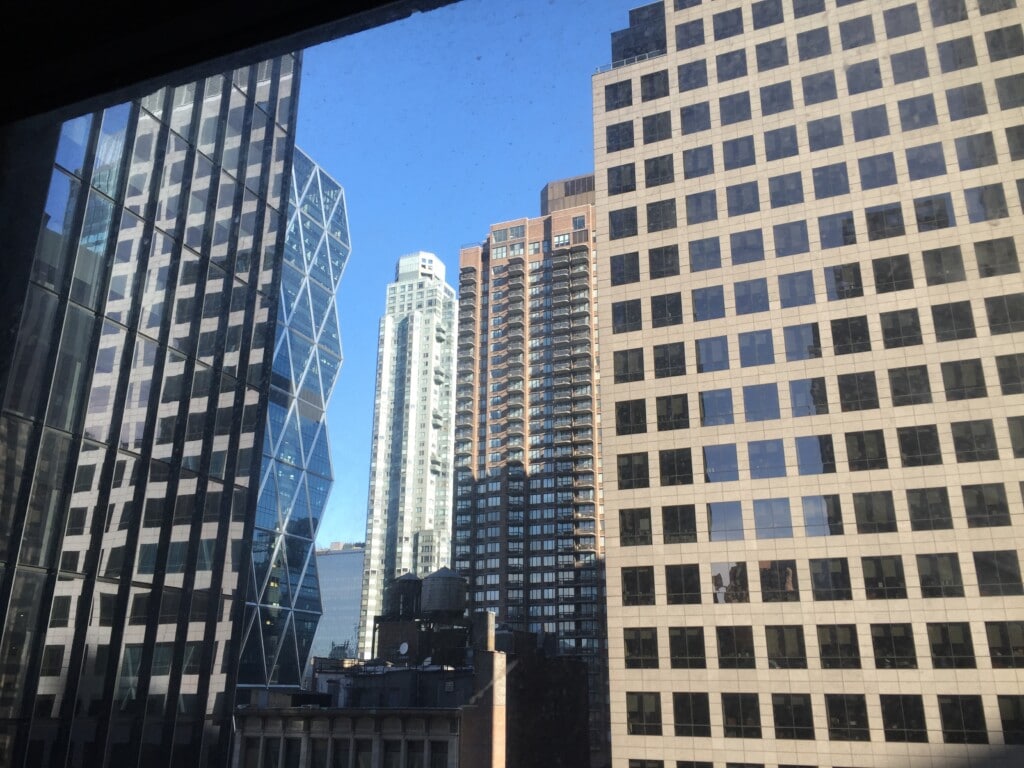 Yeah, that was the view from our room. 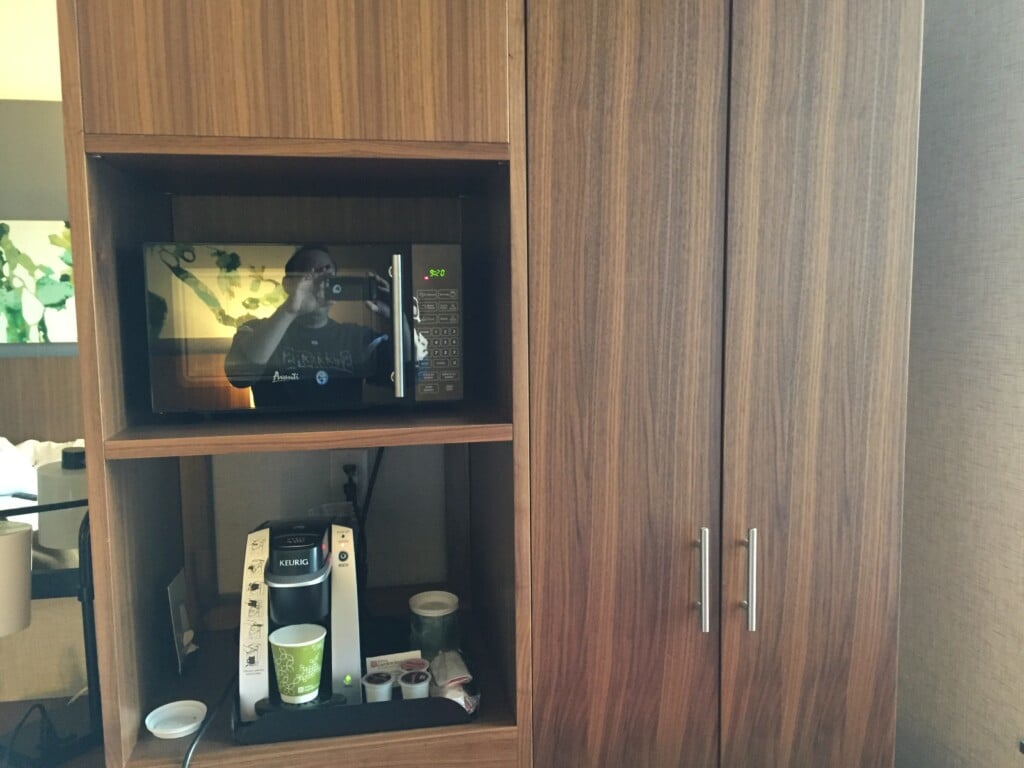 Our room also had a microwave, a mini-fridge and most importantly, a Keurig coffee maker! 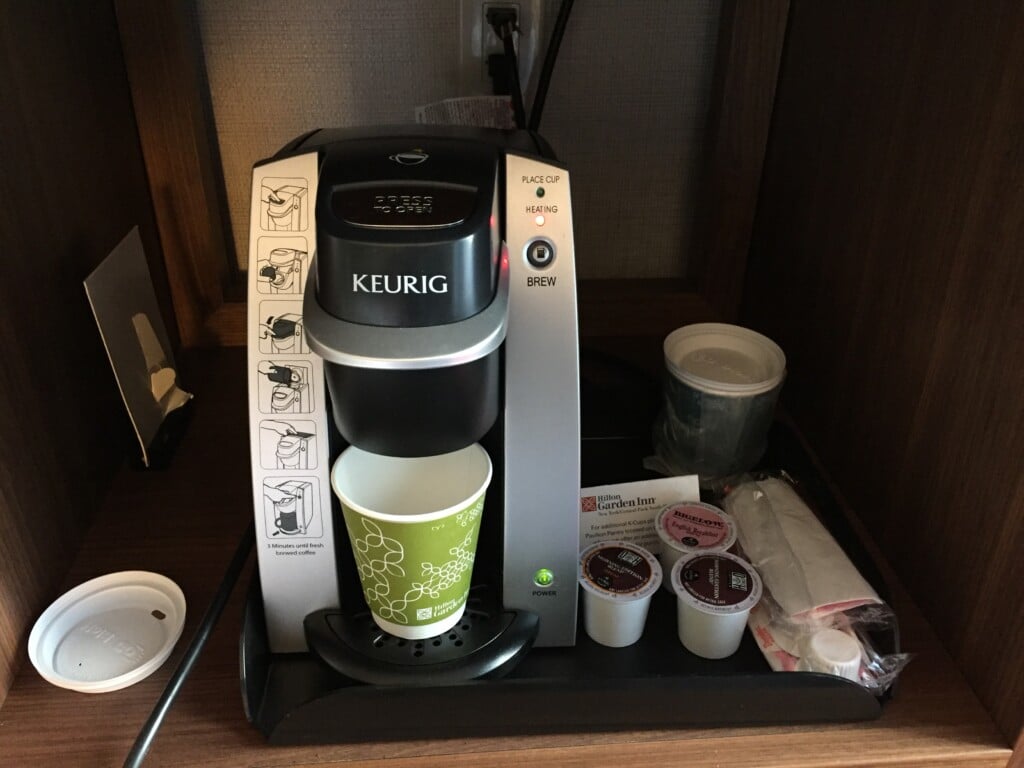 Bonus points again to the Hilton Garden Inn for offering a few different K-cups, and a travel lid! 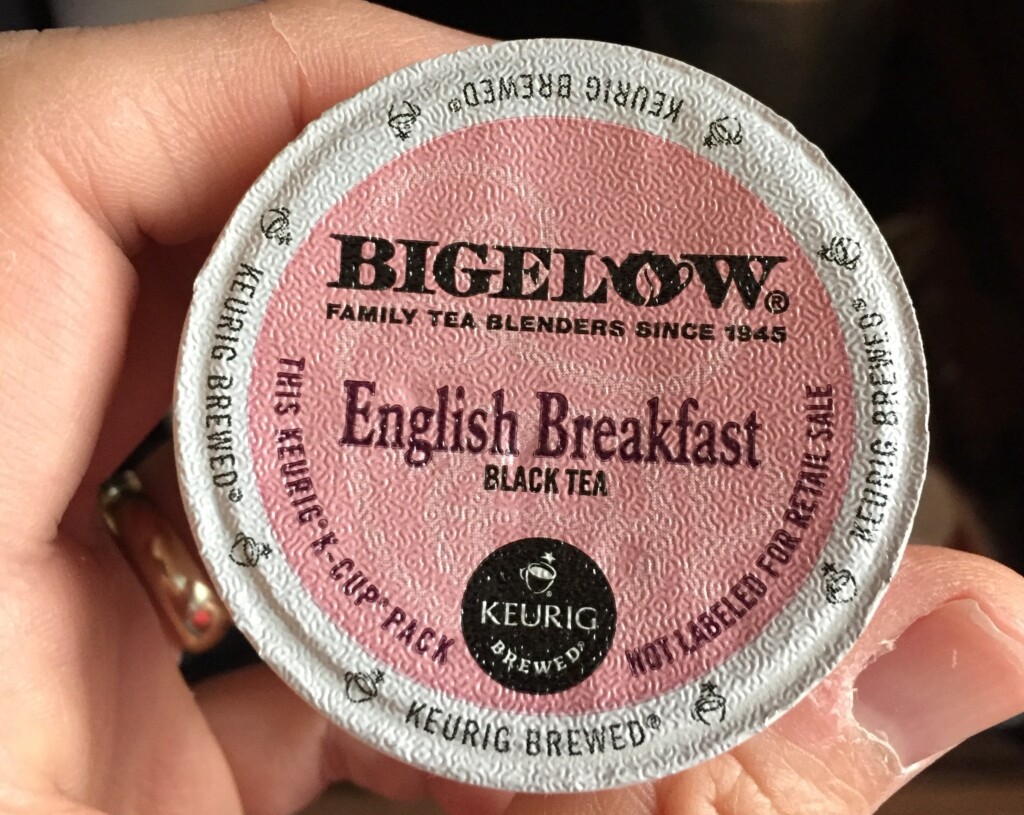 Allie’s not a coffee drinker, but she was excited to see they even had K-cups for tea in the room. Real nice touch there, HGI. 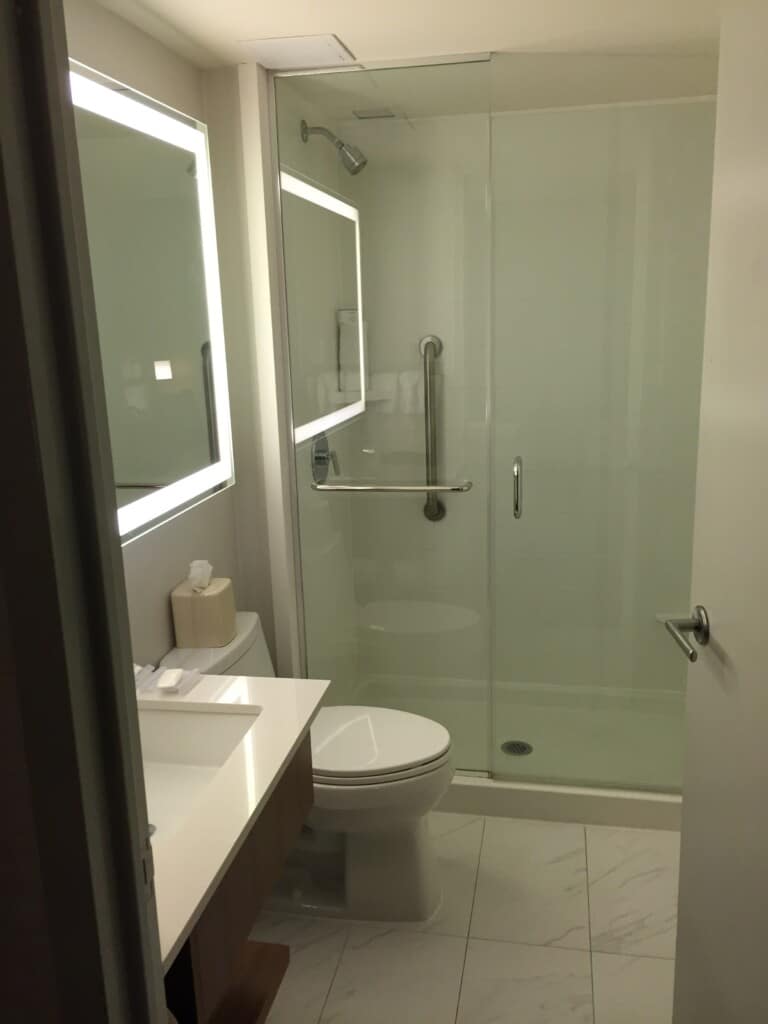 The bathroom was real nice too. To me, I just need a real good shower. One that’s roomy enough and has good water pressure. The Hilton Garden Inn did not disappoint. Plenty of room in there, and a super powerful shower head to blast the city grime off! 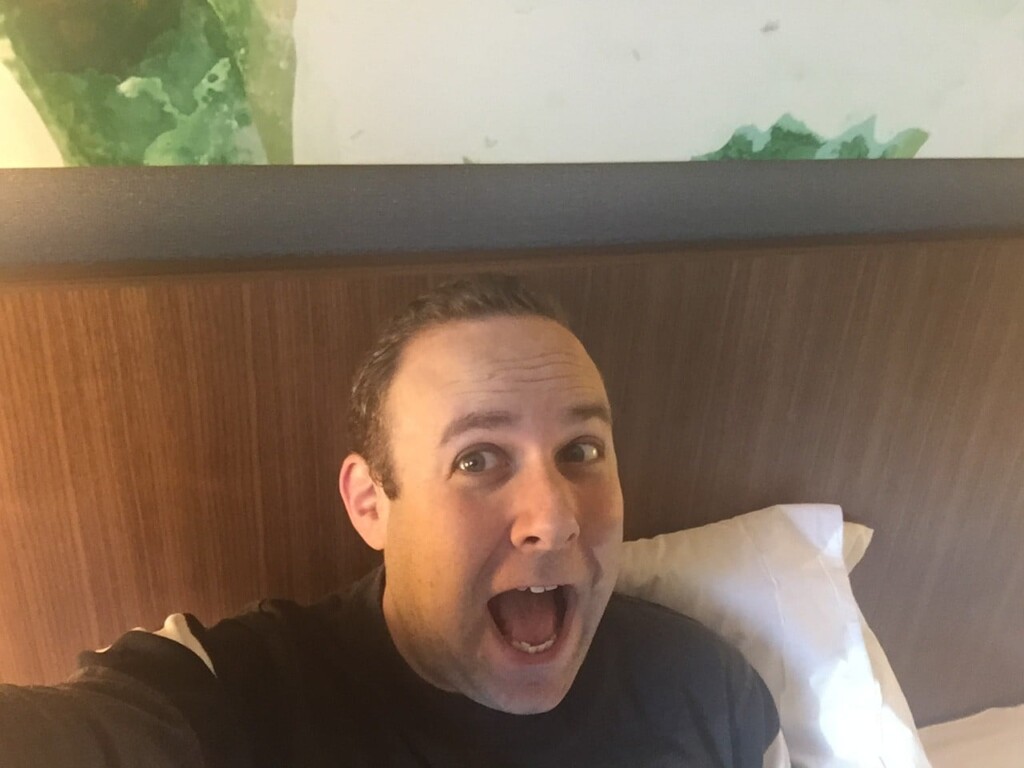 Last minute selfie before getting ready for a night out on the town! 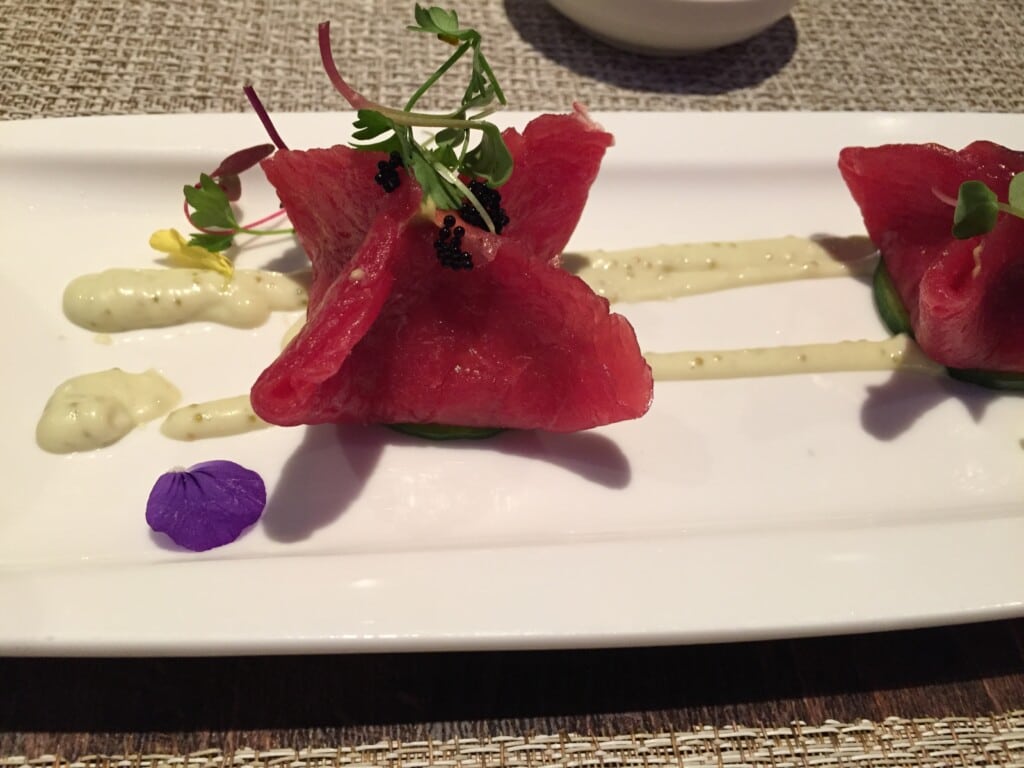 We got dressed and decided to walk over to Ajisai Japanese restaurant on Lexington Avenue. It was about a 10 or 15 minute walk, which was perfect.  As was the food. The Wasabi Tuna Dumplings (pictured above) were one of the greatest things I’ve ever eaten in my life. I almost had to fight Allie for the last one! 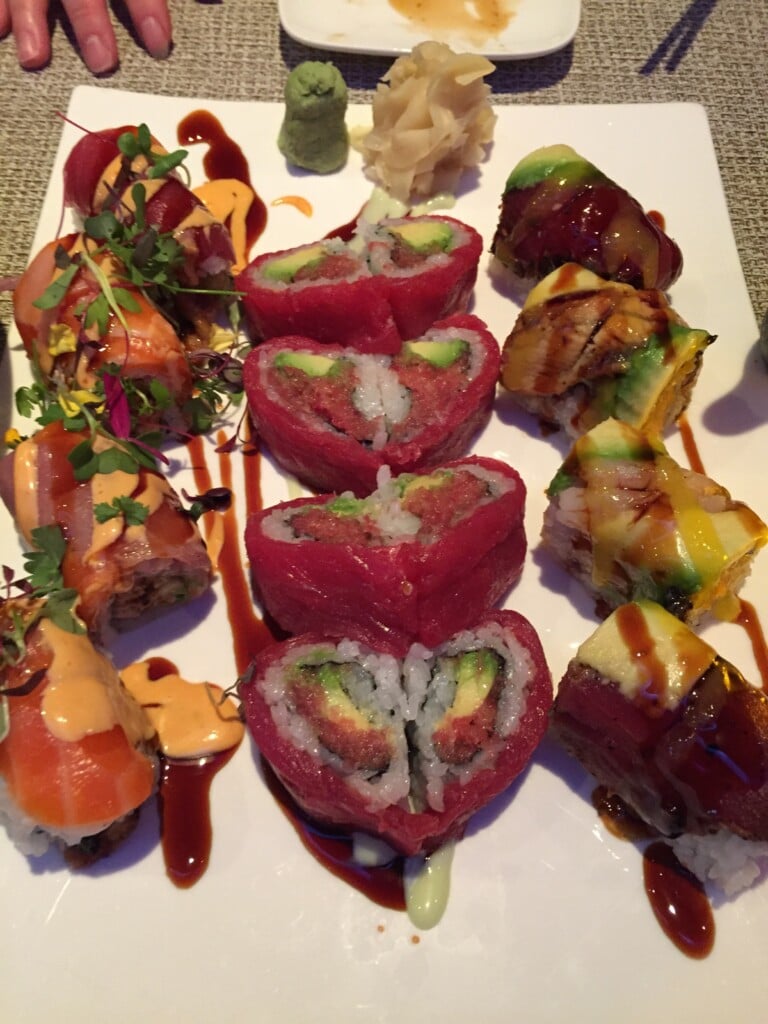 The sushi itself was top notch too. I love trying all sorts of different rolls, and we did. But how can you not appreciate the beauty of sushi, like the Sweet Heart Roll which tasted as good as it looked.

After dinner, it was a short walk to the Al Hirschfeld Theater to see Kinky Boots. 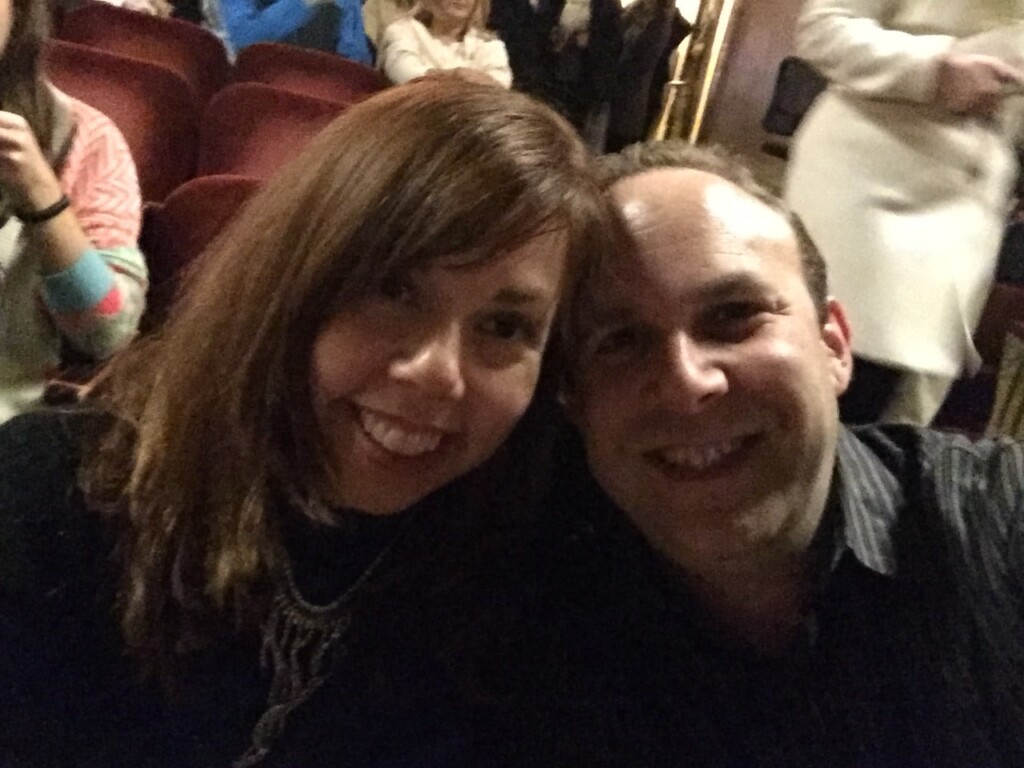 We had to take a theater selfie, even if it came out dark and grainy. The show was a lot of fun. Just silly, mindless entertainment with some real powerful voices. Allie absolutely loved it and that’s all that really mattered to me.

I did tweet out to Kinky Boots about our date night and their social media team is on the ball! 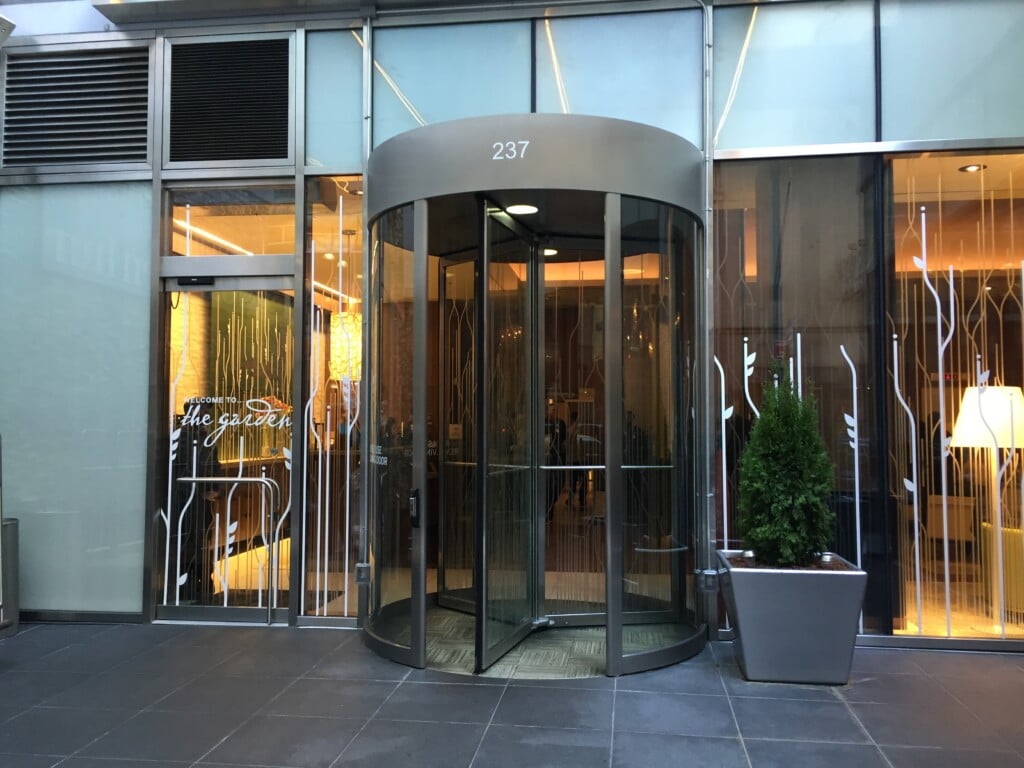 We ended the evening back at the hotel, where we watched an episode of iZombie on my iPad before passing out for the night. I know, not your typical romantic show, but it’s a fun one that we both enjoy. 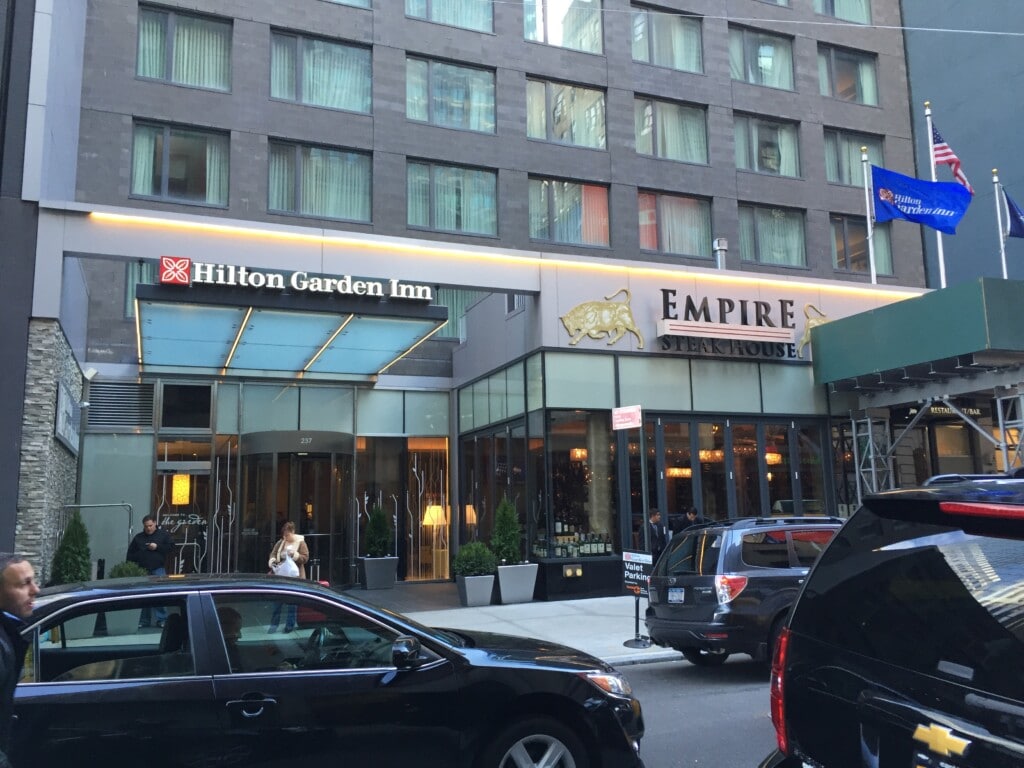 All in all, it was an amazing weekend and I couldn’t have asked for anything more to celebrate 25 years of dating. Here’s to 25 even better years in the future!

If you’re planning a trip to NYC, consider staying at the Hilton Garden Inn Central Park South. It’s the perfect location for anyone hitting Broadway, Times Square or shopping over by Columbus Circle!

Disclosure: While I received a complimentary night’s stay and meals at the Hilton Garden Inn, all opinions expressed in this article are my own.