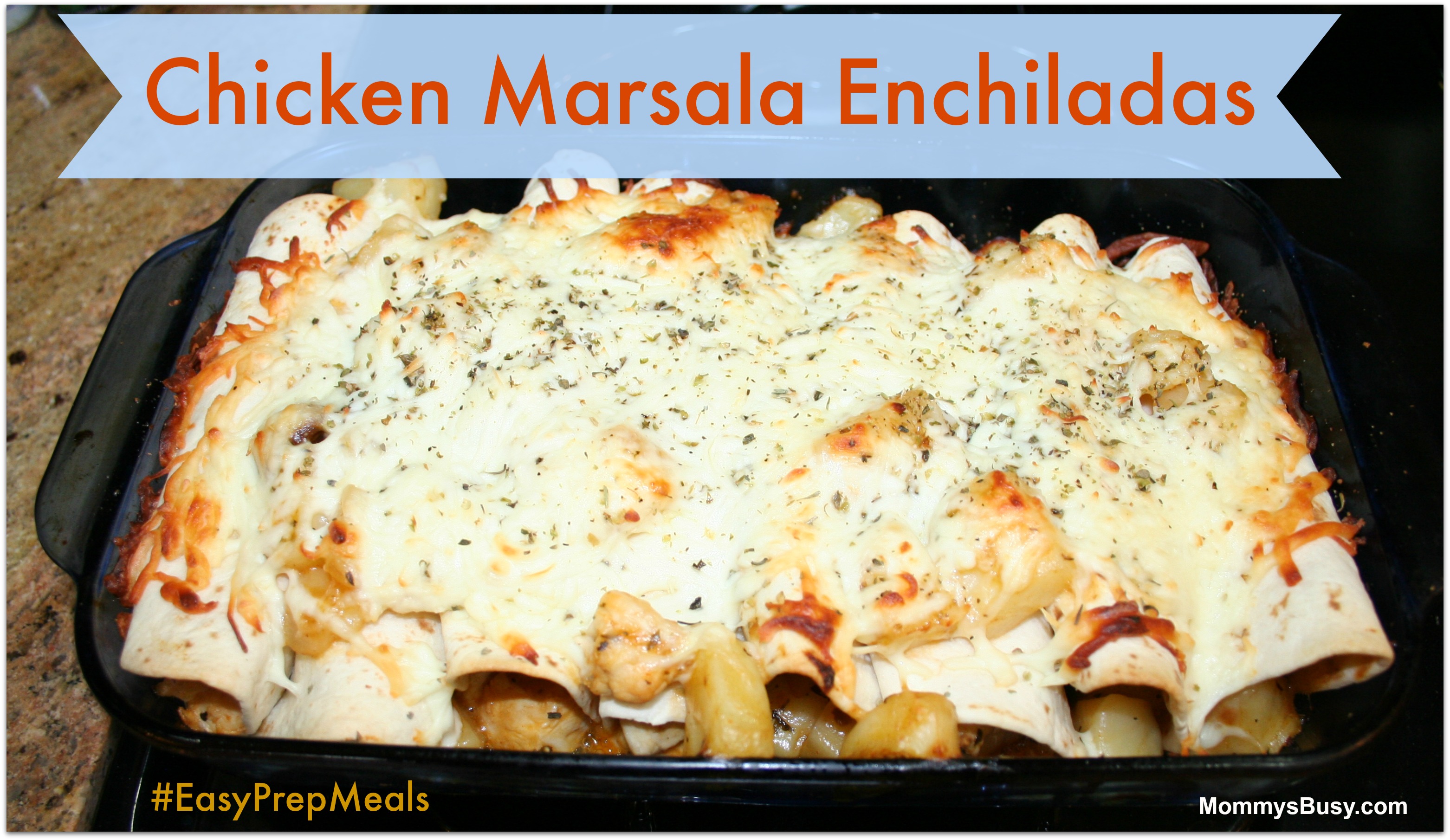 One of my mom’s favorite meals in the world (not counting lobster, of course) is Chicken Marsala. She gets it probably 95% of the time we hit an Italian restaurant. My wife’s even made it herself a few times at home. It’s not really one of those easy dinners, though, so she doesn’t just whip it up all that often.

When I saw that these new Campbell’s Skillets had a marsala flavor, I knew I had to try it!

As part of a campaign, I was challenged with making my own recipe using a Campbell’s Skillets meal. Sure, anyone can easily fry up some chicken, add the packet of Marsala and BAM you’ve got instant dinner. Couldn’t be easier, right?

But what could I do differently with marsala to make it my own? I thought for maybe 10 seconds and then it hit me… enchiladas! I mean, put anything in a tortilla and its instantly better! So I devised my own Chicken Marsala Enchiladas recipe and not only did I survive the process, but they were crazy tasty too!

The full recipe’s at the end of this post, but here’s a step-by-step rundown of how I made them!

First, I grabbed about 7 or 8 medium-sized red potatoes and tossed them into a pot of boiling water. (Yes, I washed them first!) I boiled them for roughly 10 minutes or so just to soften them up a bit. 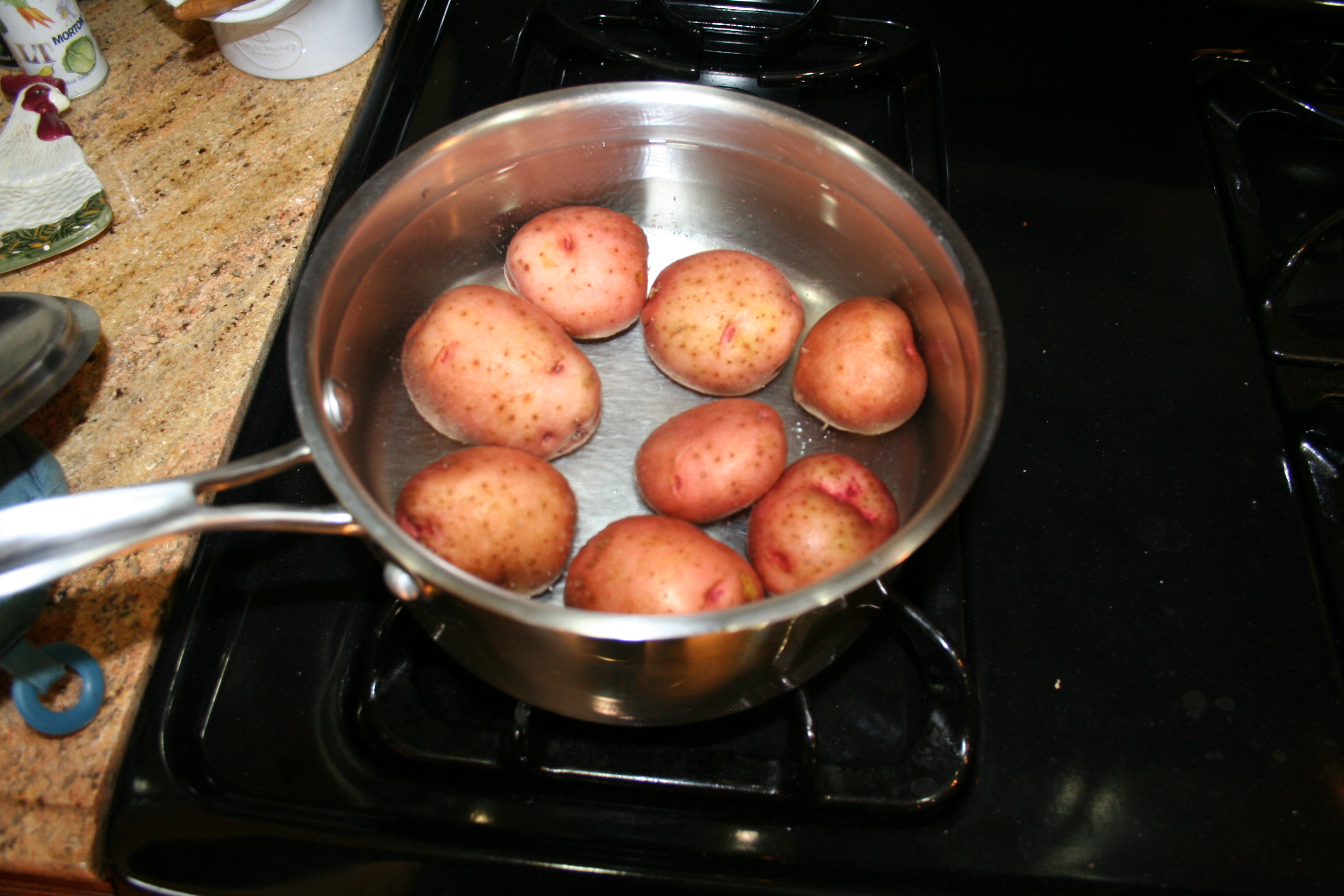 While the potatoes were boiling, I took 1 lb. of chicken breasts, chopped them up into small cubes and tossed them in a frying pan. 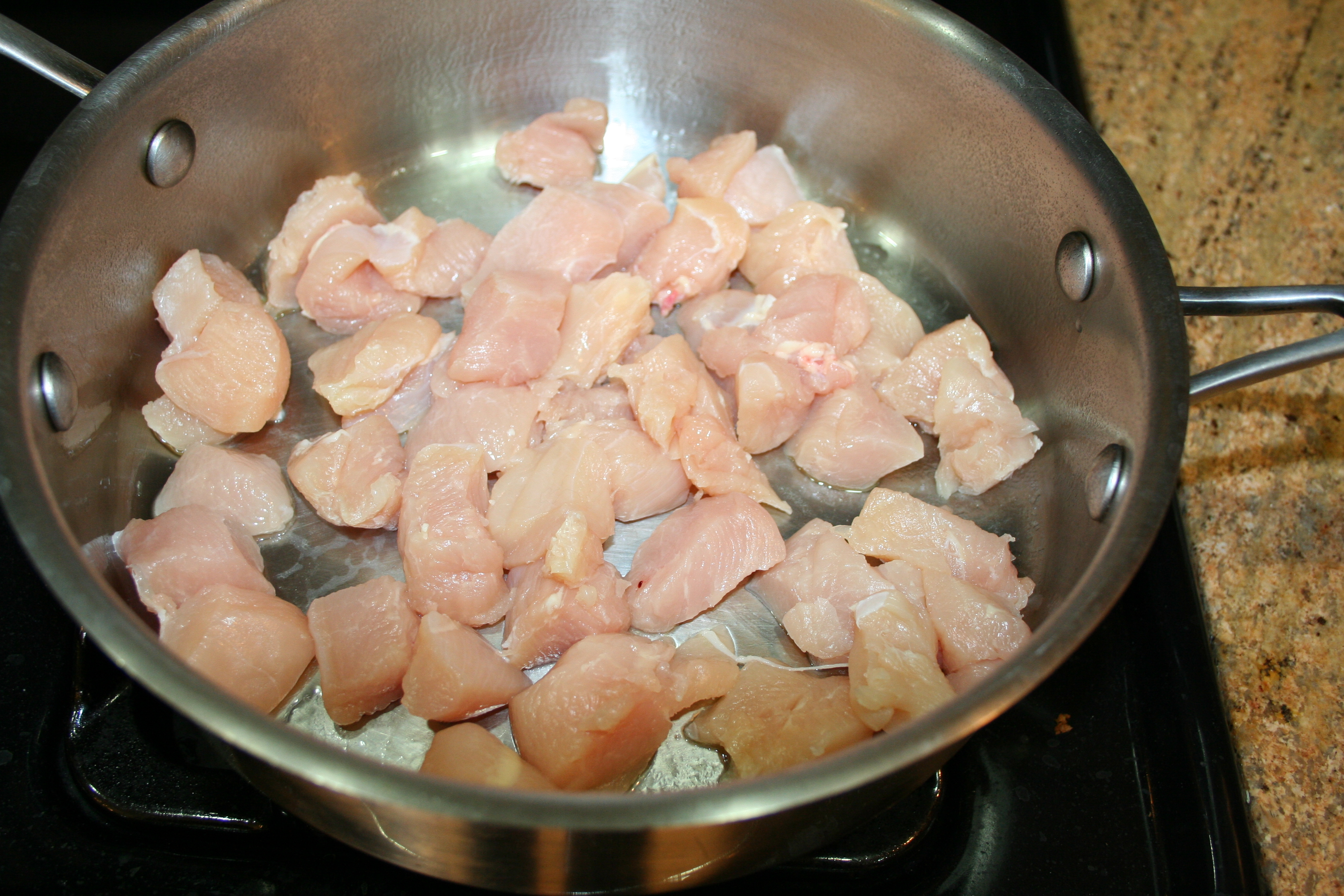 At this point, Allie (who was following my instructions and relaxing on the couch in the living room) started pointing out that something smelled really good. Apparently, I hadn’t screwed things up yet!

Okay, so when the chicken was cooked through and no longer pink, I took it out of the frying pan and set aside in a bowl. Then, I took the potatoes out, peeled them and cut them into medium slices. I tossed them back into the same frying pan I had used for the chicken and fried them for a few minutes under medium heat until they started to brown. 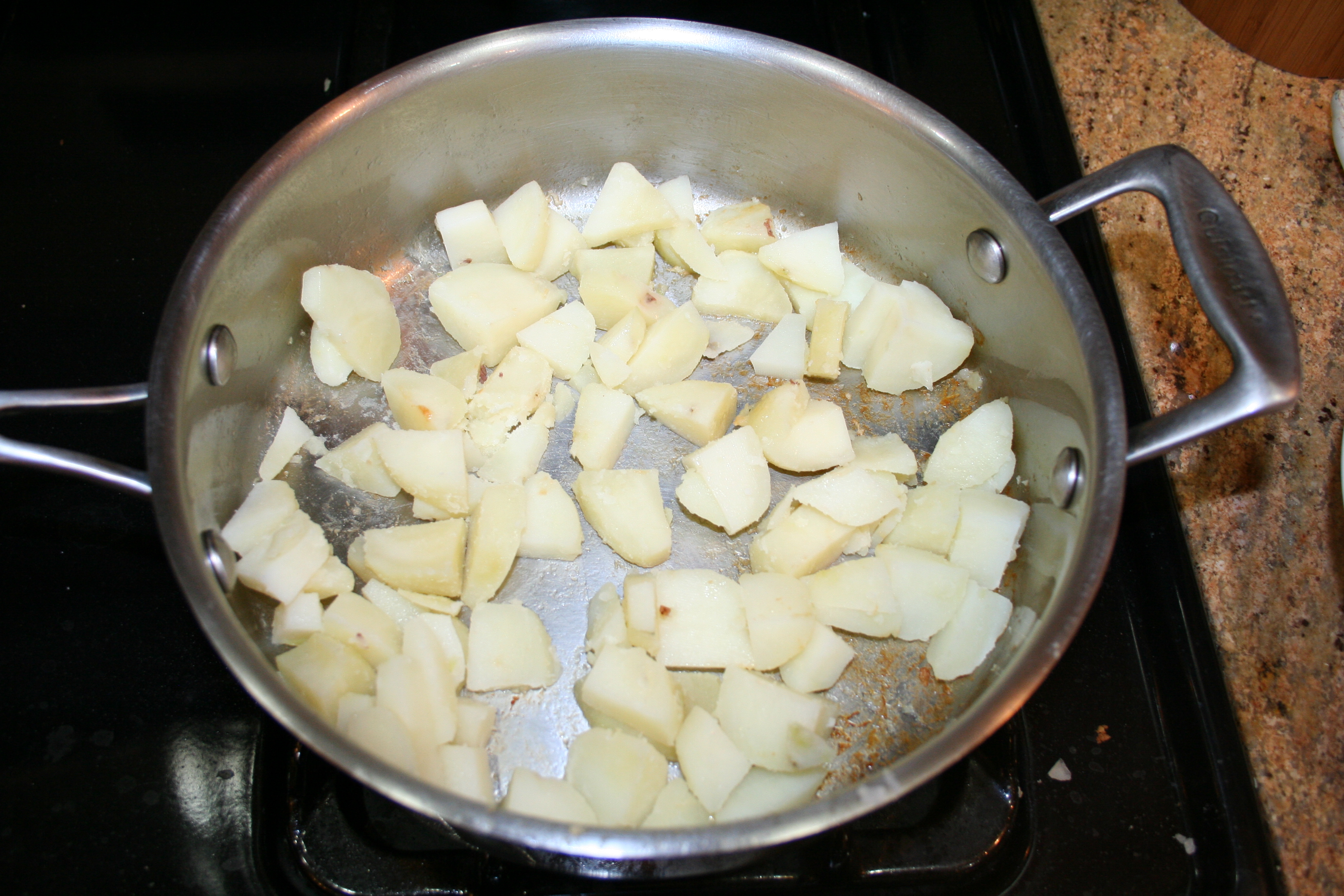 Now the fun could begin! I mixed the cooked chicken in with the potatoes and stirred. Then I opened up a pouch of Campbell’s Skillet Sauces “Chicken Marsala” flavor and poured it into the pan. 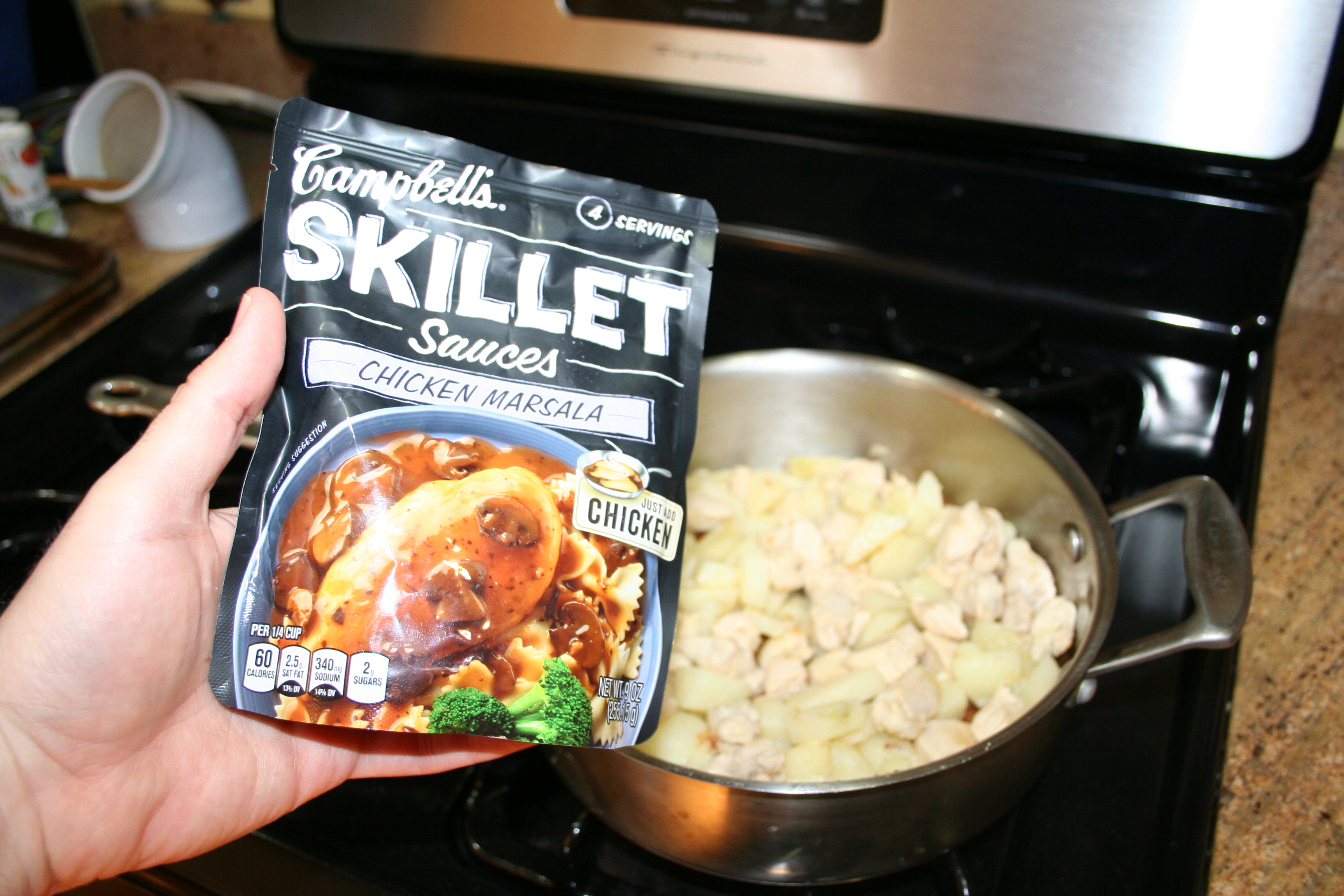 I mixed things up and let it cook for just a few minutes. Warning: The amazing smell at this point may induce some serious drooling, so keep your mouth away from the stove. 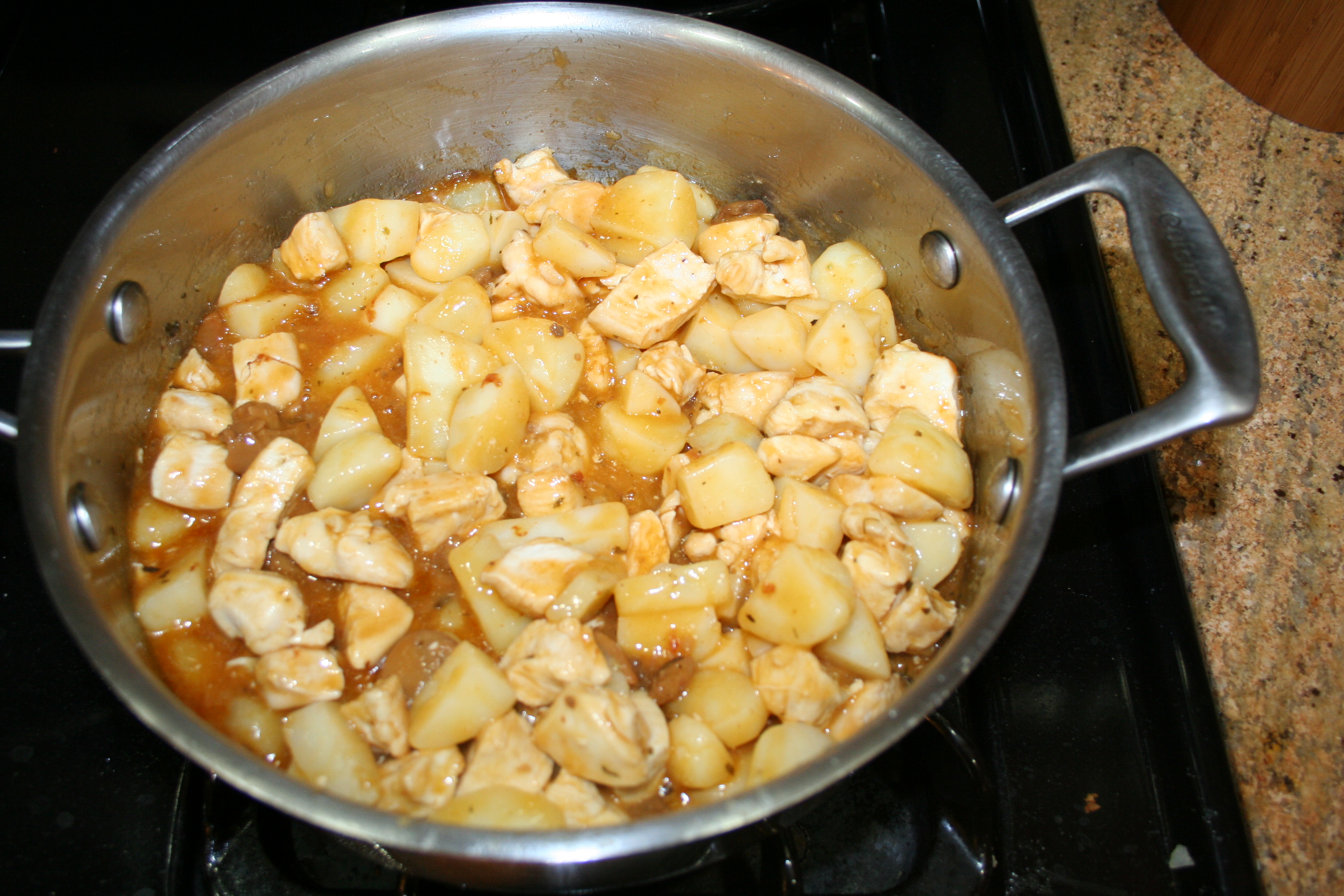 I poured the mixture into a bowl and prepared to get rolling! I spooned about 2 tablespoons of the chicken and potato mixture into a tortilla and rolled. 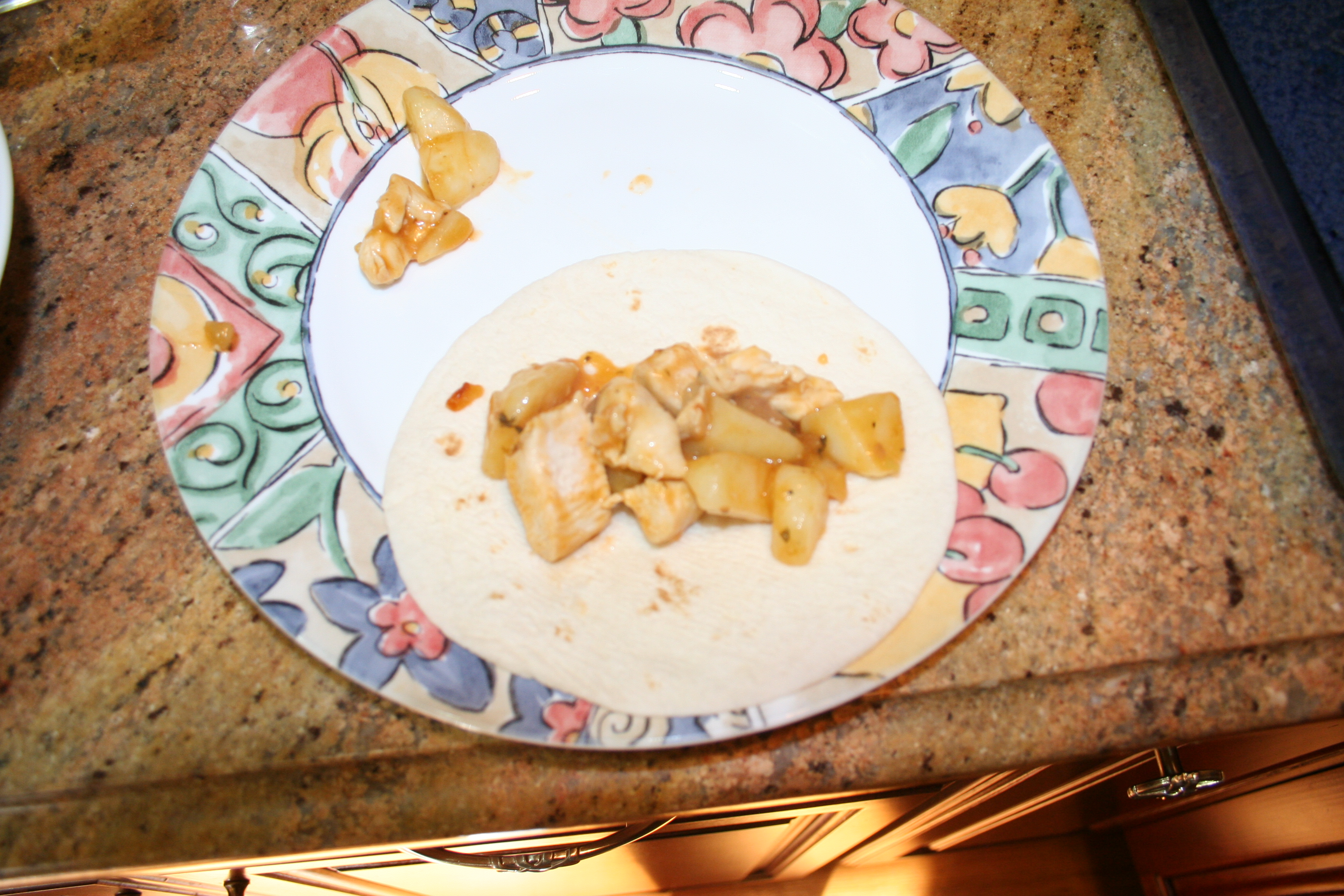 I managed to roll 8 enchiladas and squeeze them into a small baking pan. I probably could’ve spread things out a little more to make 10 if I wanted to I bet. 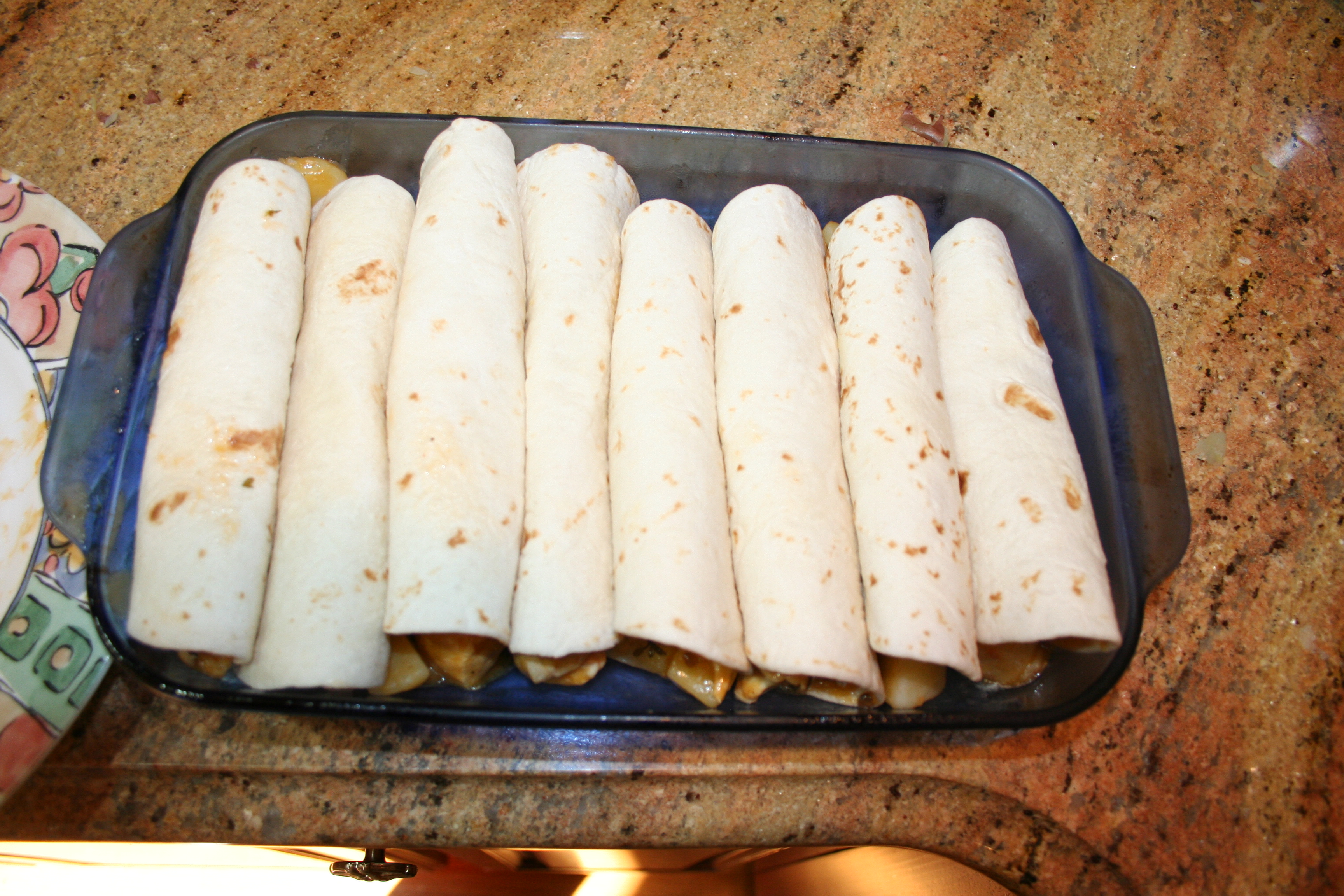 I had a little bit of the mixture left over, so I poured it on top of everything. 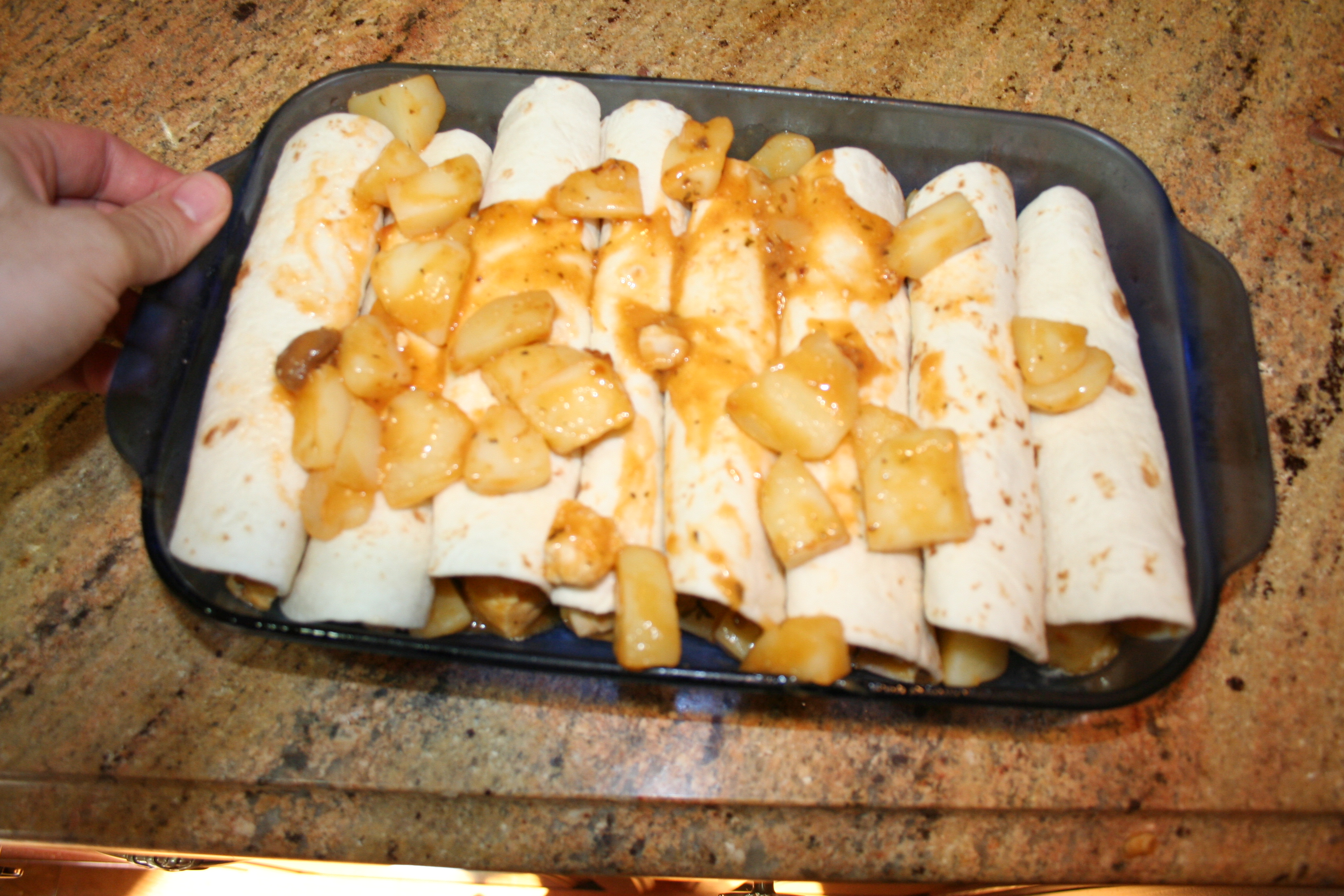 I then covered it all with a layer of shredded mozzarella and a dash of oregano, before baking at 375 for about 35 to 40 minutes. Once the cheese started bubbling and browning slightly, I knew they were done. The results? Here you go! 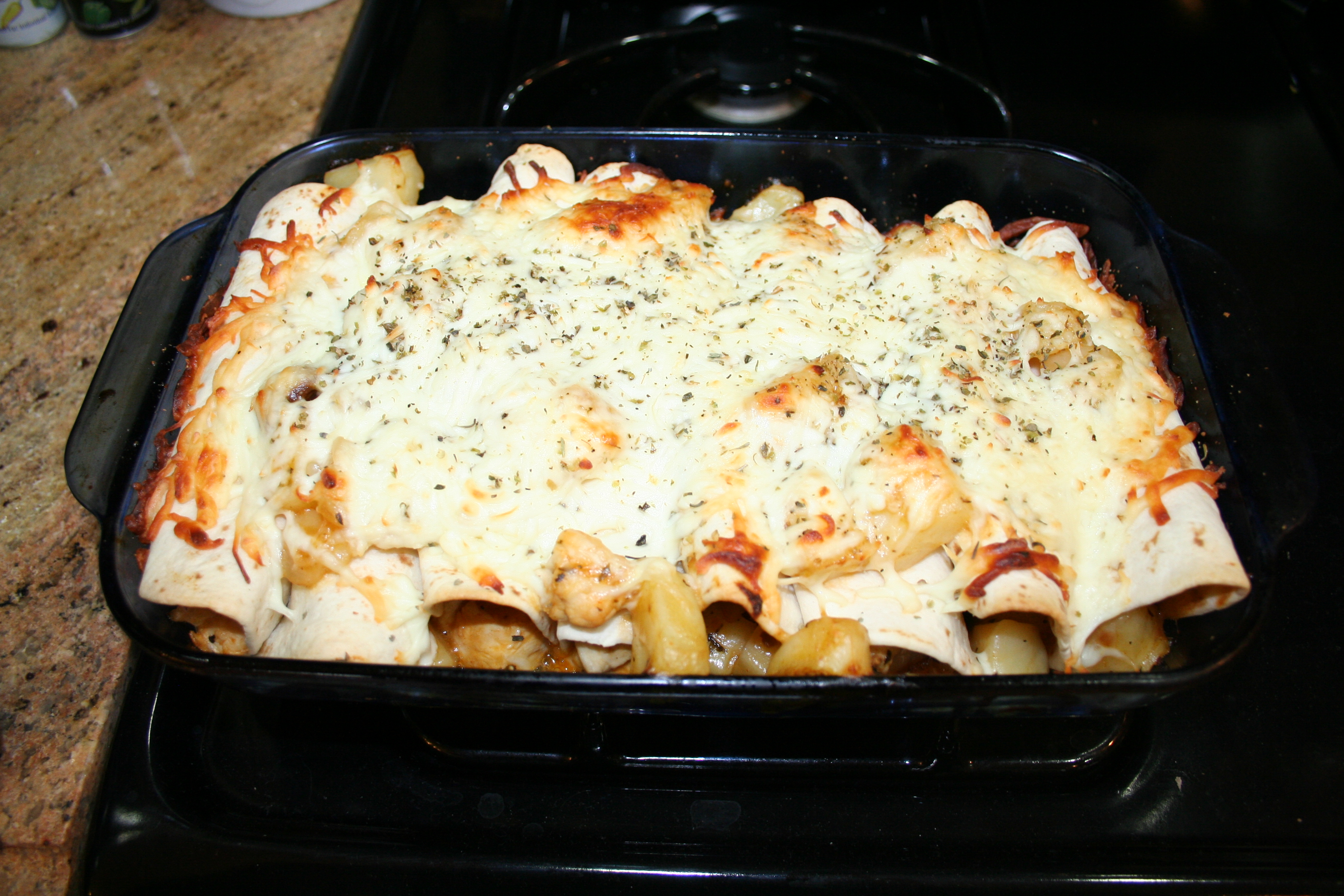 I have to say, these were incredibly awesome. Between just the two of us, Allie and I managed to finish off all 8 of them! And yes, I’ll admit that if there were more… I would’ve devoured those too.

Be sure to check with your local Stop & Shop or Giant Supermarket, as there will be an in-store demo of Campbell’s Sauces on May 3!