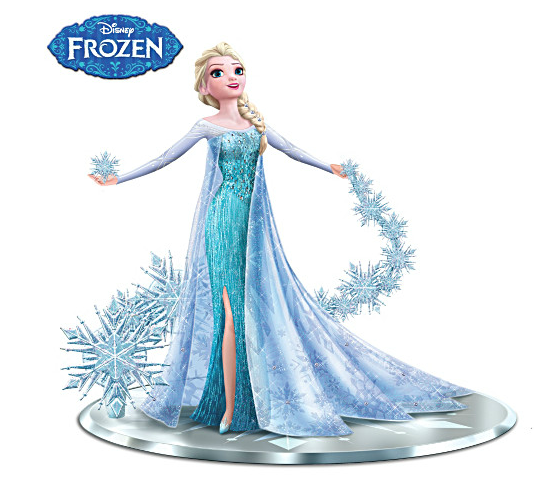 “Frozen” is worldwide the highest-grossing animated film of all time and certainly one of the most talked-about. The story, the songs, and the animation have captured the attention of people from all cultures. It’s a rare phenomenon, punctuated most memorably by the song “Let It Go” and the character Queen Elsa.

To commemorate this, the Hamilton Collection presents a handcrafted Disney Frozen “Let It Go” Elsa The Snow Queen Figurine, worth adding to any collection. It’s a beautiful figure that captures the stunning visual spectacle of the movie and the character and also the emotional impact of that pivotal scene. The figure is enhanced with Swarovski crystals and crystalline snowflakes so that she shimmers and radiates light around herself.

Not only is the figure beautiful and the cultural phenomenon of the movie unmatched, but the emotional catharsis the “Let It Go” scene represents is meaningful to people. What is it about Elsa? Little girls all over the world prefer her to the heroine of the movie, Anna. True, it is partly her sparkly dress and stunning looks. But they also love the song “Let it Go,” sensing the power and emotional importance. Long after little girls stop singing–or trying to sing–the tune every chance they get, when people return to the movie to try and remember what the fuss was all about, the look on Elsa’s face, captured exactly in the figurine, will resonate.

The character Elsa has spent most of her life trying not to be herself. Despite the fact that her powers are beautiful, unique, and captivating, her will is ruled by the potential danger of them. It’s hard to imagine any tender, carefree moments in her life, where she felt the warmth and generosity of love. So she is left to feel trapped, isolated, unloved, and helpless — most of the worst feelings we experience as humans and the seeds of depression and anger.

In the figurine, the artists have captured the exhilaration of a burden suddenly lifted. It is a uniquely human moment that people around the world can relate to, equating it with their own feelings of letting go of previously held ideals, of the pain of broken relationships, of crippling self-doubt. The figurine celebrates the embracing of self as worthy of experiencing life and love without fear. This is something we can all celebrate.

18 thoughts on “Why Collect the Disney Frozen “Let It Go” Elsa The Snow Queen Figurine?”