It’s no secret that I love Star Wars. It’s also no secret that I do my best to pretend the Prequels (that’d be Episodes I-III) never happened. But that just proves how insanely awesome Lego is, because they can actually make me enjoy (and yes, even laugh) at things like Jar Jar Binks.

If you haven’t seen any of the Lego Star Wars movies (or played the video games), you don’t know what you’re missing. They’re a riot and yes, I admit I’ve laughed at Lego Jar Jar.

So when I was sent a Lego Star Wars V-Wing Starfighter to review, I was excited but kind of bummed it was from the Prequels, not the Original Trilogy. But once again, Lego snapped me out of it and showed me that it doesn’t matter what movie or Universe it’s from, everything Star Wars is… well… awesome.

The X-Wing was always one of my favorite Star Wars toys as a kid (though the Hoth Snow Speeder was insanely cool!), but this V-Wing is a nice alternate. Smaller in size and even more versatile than the X-Wing, the V-Wing needs an R2 unit (or Astromech Droid) to help pilot the ship.

Simple but spot on, Lego lets you control the little droid as a minifig but you can also pop his head off, and attach it to the top of the V-Wing on a swivel, so it can really spin. (You need to make the BE-BOOP noises yourself, though.)

I really like the look of the ship and the size is perfect for little hands to hold. You can see the V-Wing Pilot chilling with his blaster in the cockpit. You can also see the small green “rockets” that actually do shoot.

The really neat thing about the Lego Star Wars V-Wing Starfighter? You can rotate the wings for flying (above) and landing (below) modes. Ryan put this one together and loved playing with it, particularly the rotating wings. Again, a simple detail that Lego easily could have ignored but it’s that extra touch that truly makes Lego the King of Construction Toys!

Here’s a straight-on shot of the V-Wing, ready for take-off. 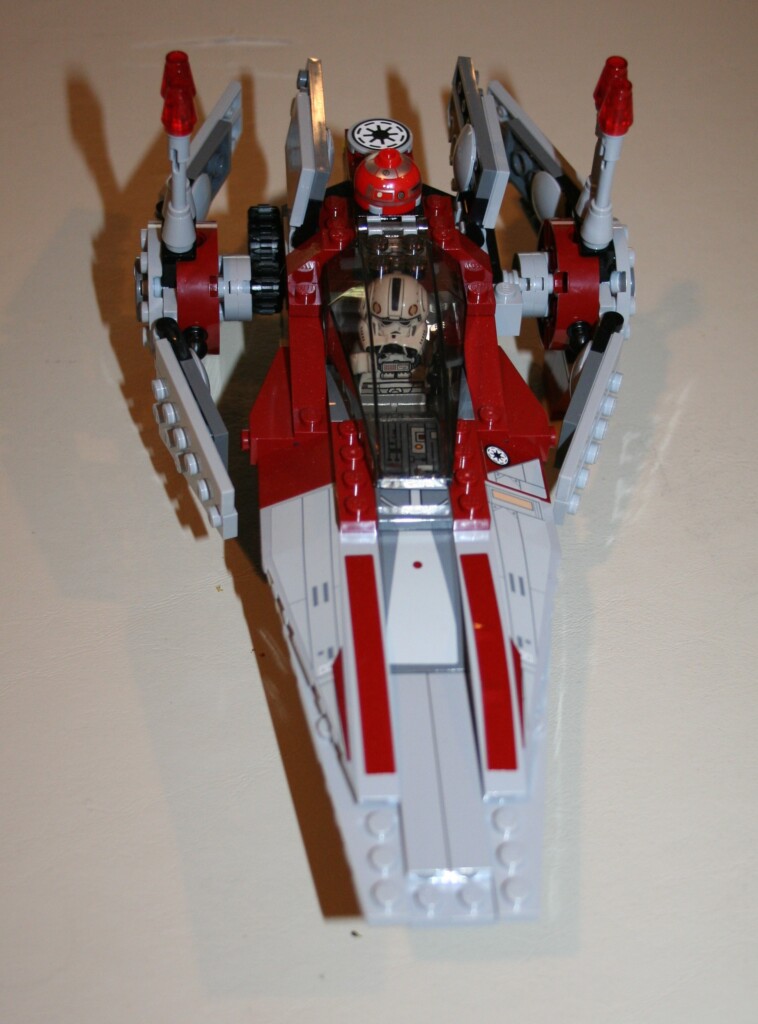 Whether you’re a Star Wars (or Lego!) Completist or just love some really cool ships, you’ll want to check out the Lego Star Wars V-Wing Starfighter set. I may still not like the Prequel films, but that’s not gonna stop me from building and playing (er, my kids that is) with those Star Wars Lego sets.