This shop has been compensated by Collective Bias, Inc. and its advertiser. All opinions are mine alone. #PlayNGrow #CollectiveBias 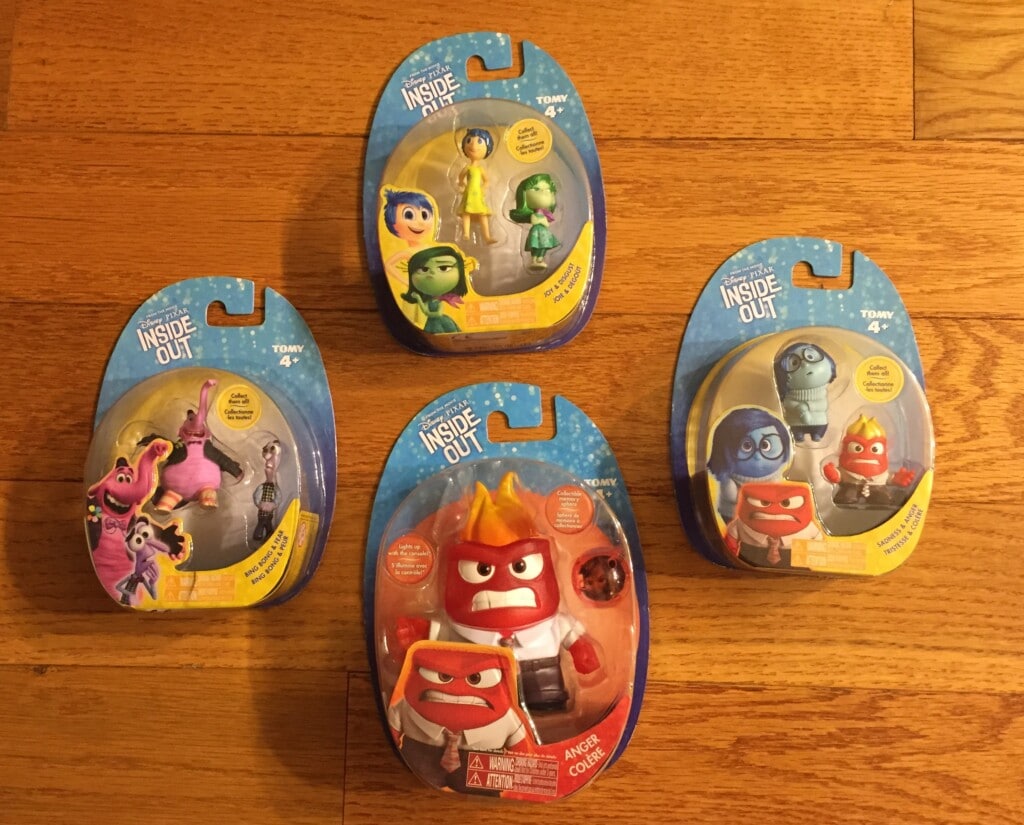 Despite the numerous pitches from PR folks for crazy things such as maternity bras, I am in fact a guy. And as a guy, I’m not too big on sharing my emotions. Guys in general are just awful at sharing how they feel. Toss in the fact that I view myself as a bit shy, and it may seem like pulling teeth to get me to “share my feelings.”

Yes, you should feel sorry for my wife.

She’s done a great job, though, of helping me come out of my emotional shell. So with our kids, we try to help them discover their own emotions too. I definitely want to do what I can to get Jason and Ryan to open up and talk to us about anything they want and everything they feel.

Jason’s a tough one. He’s even more clammed-up than I was. As he’s gotten older, he’s certainly gotten better, though. And he’s now at an age where Allie and I can have some real, grown-up type discussions with him about emotions and feelings.

Ryan’s still in the single digits, though, so he’s just starting to really become aware of emotions to some degree. Recently he came to us saying that two of his friends were fighting with each other and stopped speaking to one another. He’s real good friends with both and hated being in the middle of this fight. He didn’t know what to do, how to respond or even how to really process his emotions.

Allie did a fantastic job of talking him through things and thankfully his friends eventually made up. But getting Ryan (and even Jason) to get more comfortable with their emotions would be fantastic.

It’s one reason I’m really psyched for Disney/Pixar’s upcoming movie Inside Out! We’re actually taking Ryan and his friends to see it this month for his birthday party. Yeah, almost a dozen kids full of sugar, watching cartoons. Emotions will certainly be running wild! 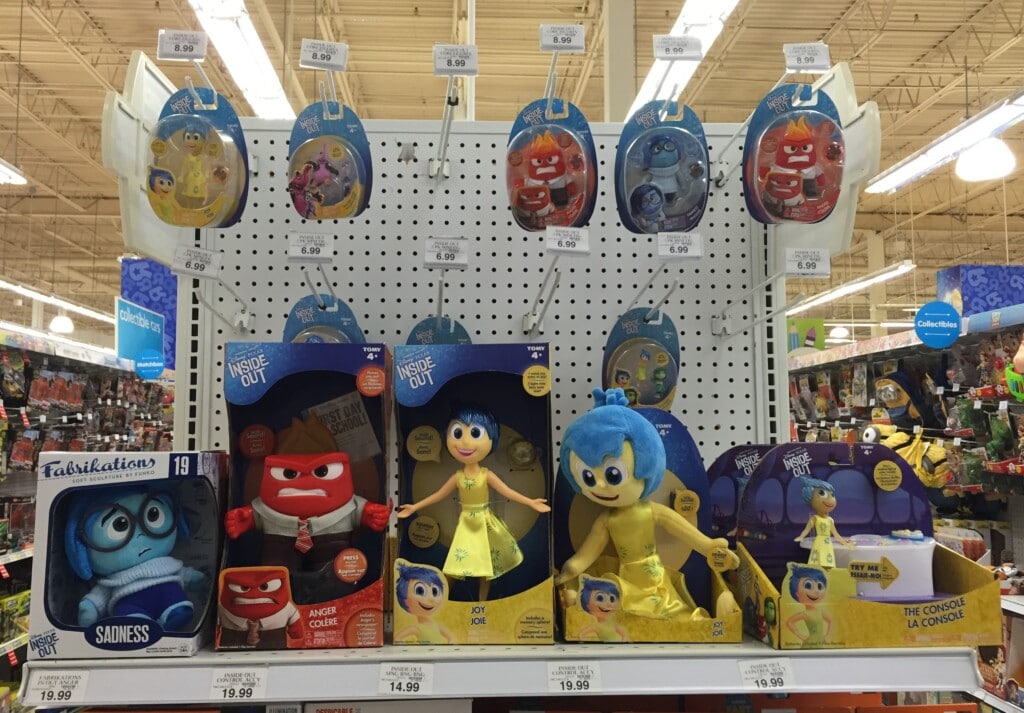 As expected, there are some great toys tied into the movie and I recently swung by Toys “R” Us to see what Inside Out merchandise they have to offer. I love shopping at Toys “R” Us and have been going there for… geez, decades! Nothing beats an entire store full of toys (except a house full of toys!), and I’m also a big fan of their Rewards Program where you can earn points for your purchases. We’ve gotten some great discounts thanks to the program!

Anyways, I picked up mini-figs of all the main characters: Sadness, Anger, Joy, Fear, and Disgust, as well as Bing Bong, whoever that crazy pink elephant-looking guy is. I grabbed a large Anger too, as he’s easily my favorite of the bunch. And it’s probably the one emotion everyone feels the strongest. Or at least the one that definitely needs to be kept in check the most, I’d say. 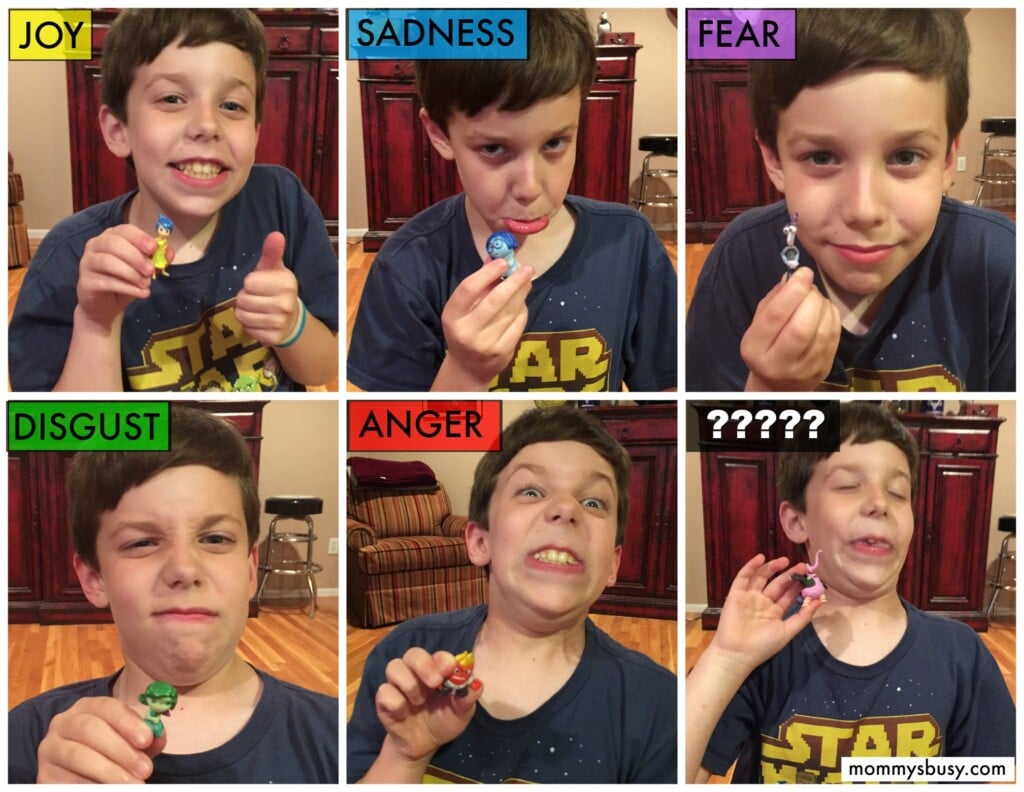 Ryan LOVES playing with “guys.” It could be large action figures, small PVC ones or anything in between. I swear, if you give this kid a salt and pepper shaker, he’ll make an adventure out of it! 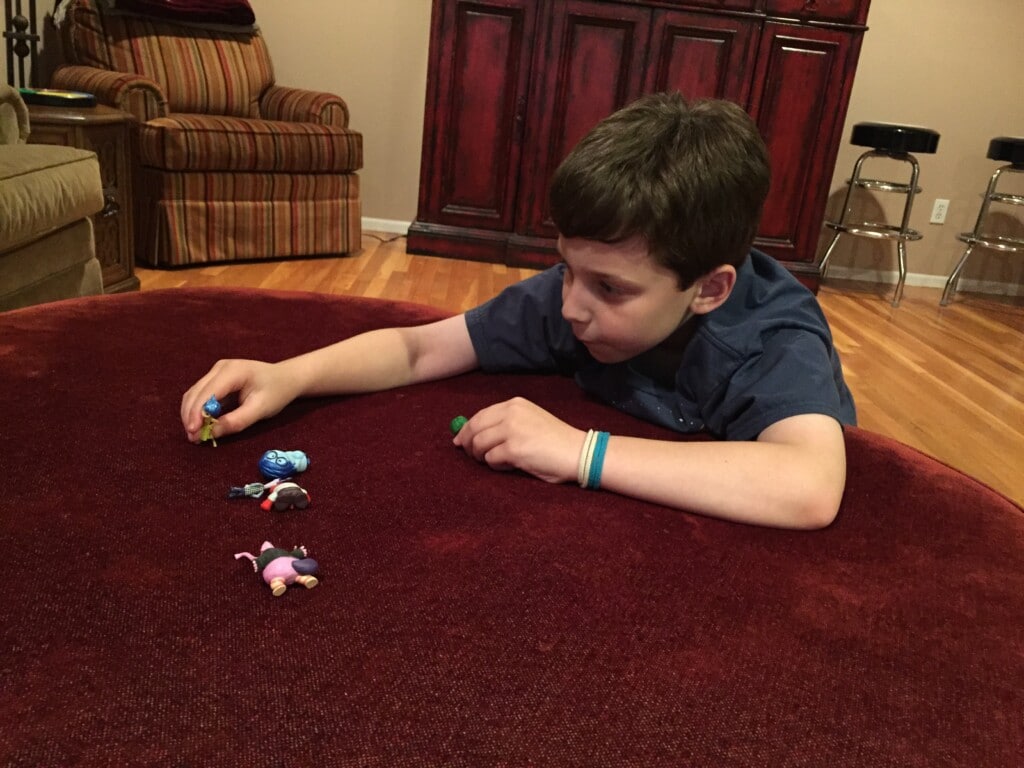 I wanted to give him these emotional mini-figs to play with and hopefully get out some of his questions/emotions while he played. Jason has a habit of jumping in on Ryan while he’s running around the room telling a story. So there’s a good chance it could rub off a bit on Jason too.

Like most brothers, I don’t think a day goes by without hearing Ryan shriek, “JAAAAASON! STOP IT!” Or vice versa. They’re brothers. They fight. They get mad. They play. It happens. Hopefully I can teach them to try talking through their issues first, before being quick to jump to anger. That’s where the large Anger doll can certainly come into play as a good reminder! 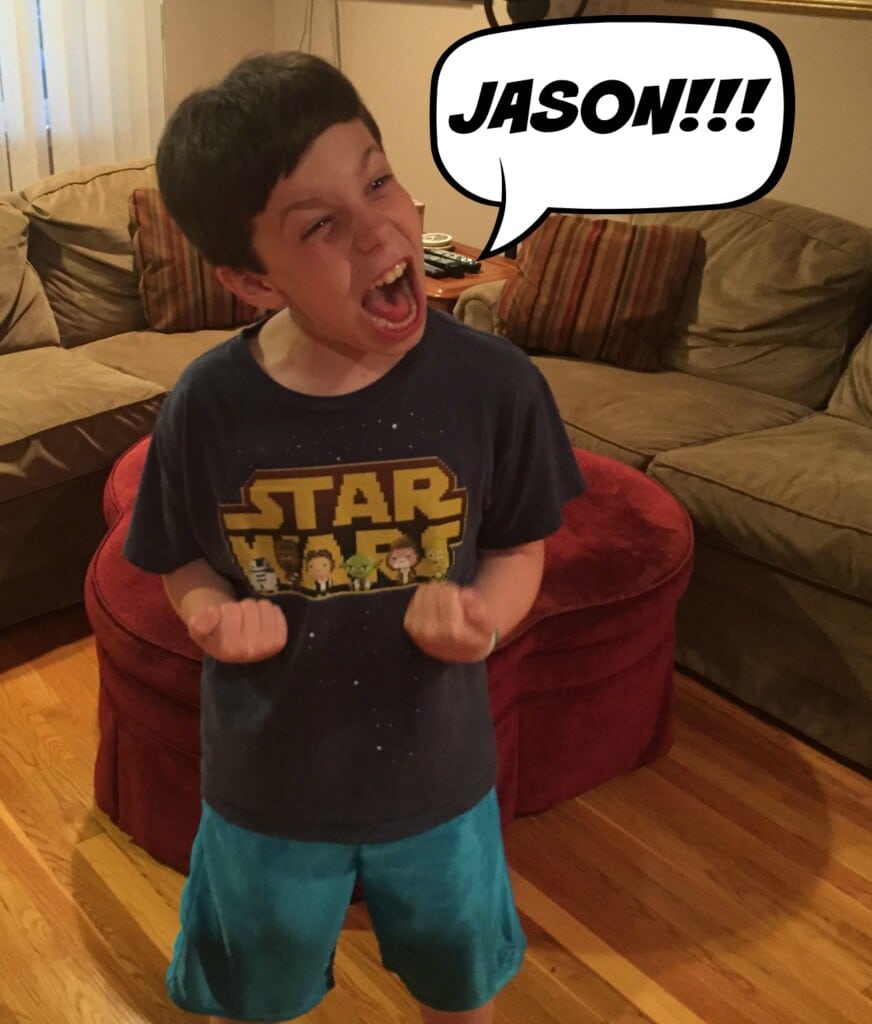 Not a day goes by without Ryan screaming his brother’s name for some crazy reason. He can be a bit quick to anger, so it’s time to introduce Ryan to the hothead himself. 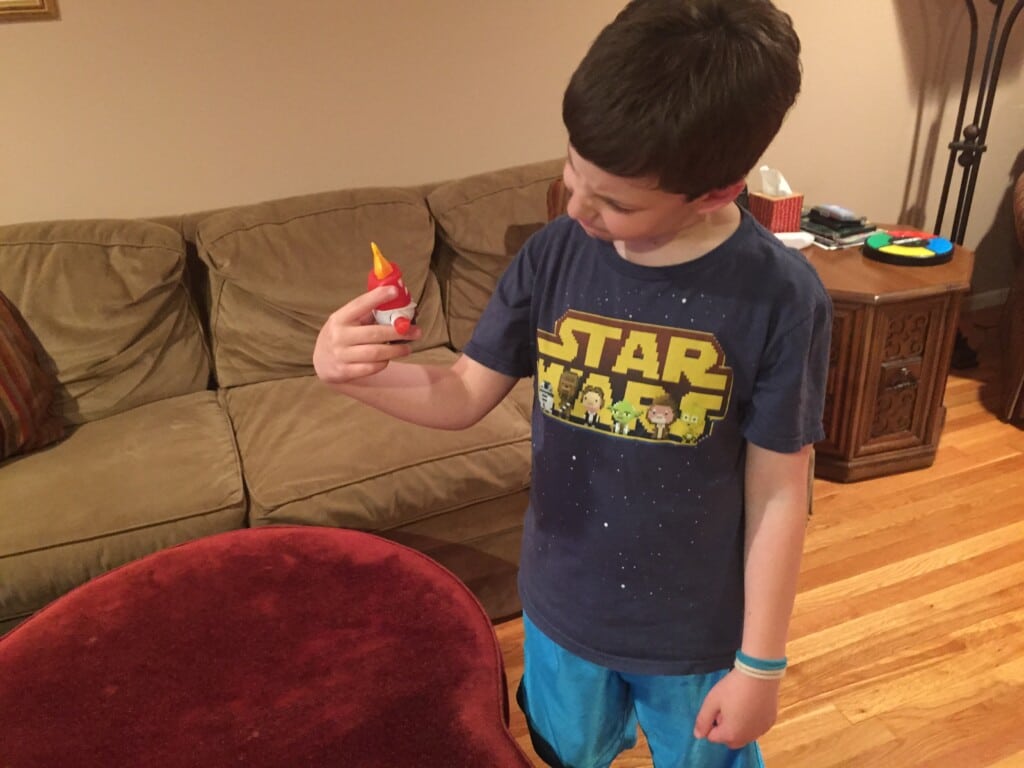 Talking out his feelings and explaining why he’s angry can help Ryan calm down and get to the root of the problem. 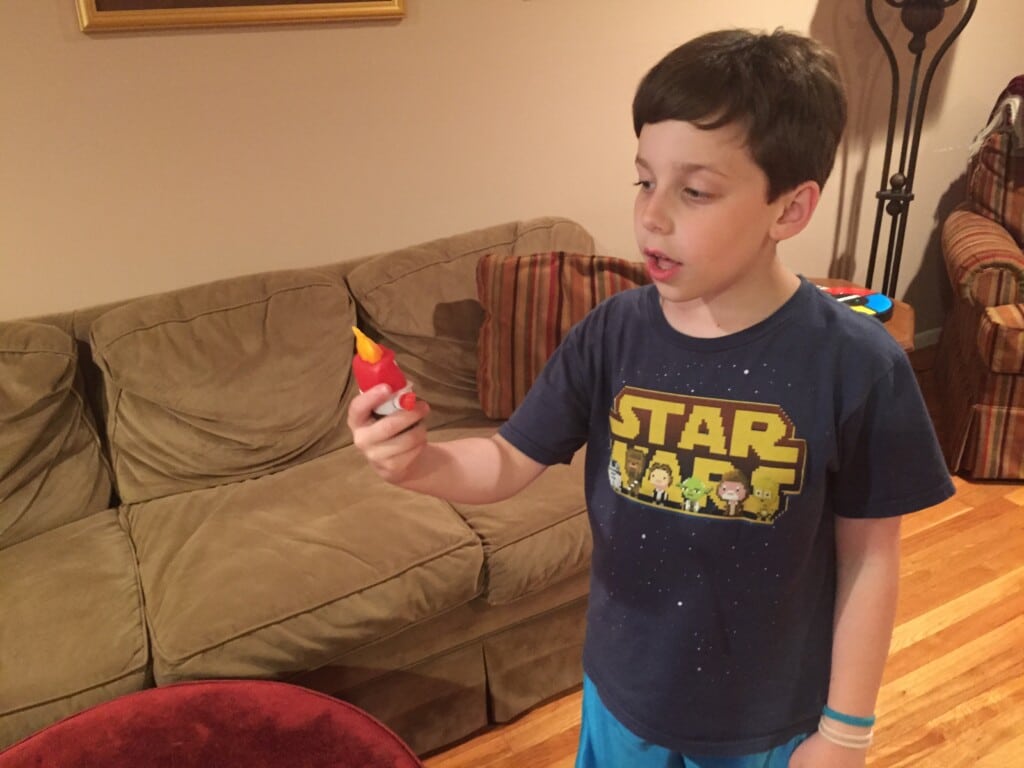 After getting in touch with his feelings, Ryan’s able to take control of his anger and let joy back in! 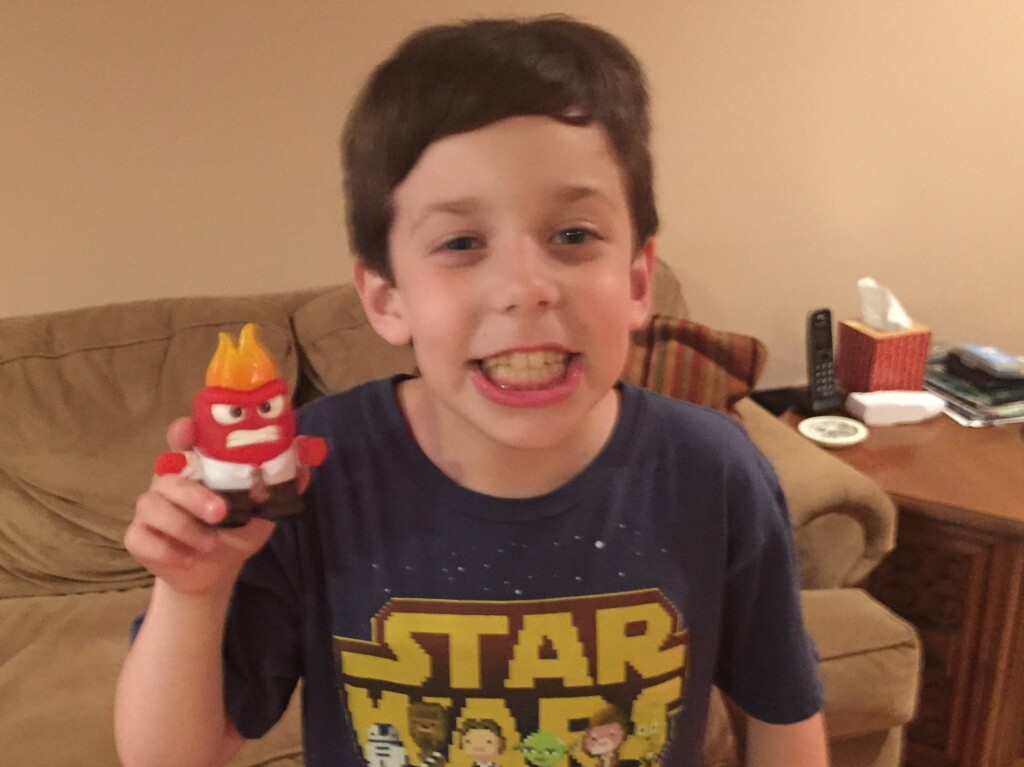 It’s actually never too old to talk to your kids (or yourself for that matter) about emotions. Even just getting them to stop and think about the very idea of emotions and how they’re affecting your mood and thinking is a big step. I’m really looking forward to the movie itself, but also to seeing how such a fun, open discussion of emotions may end up sparking something within my own kids.

How do you talk to your kids about emotions?

Inside Out Toys at Toys “R” Us

11 thoughts on “Getting Emotional With My Kids Inside and Out”