If you live in the NYC area and you’re already pulling your hair out from your kids being on vacation this week, don’t despair. Put the wine down, it’s going to be all right.

I highly encourage you to pack up the kids and head over to the Intrepid Sea, Air & Space Museum and take advantage of #KidsWeek2014! In addition to all the super cool stuff the Intrepid has to offer (You can tour a real submarine! See the Enterprise Space Shuttle! Explore a real battle station!), this week there are tons of additional events and exhibits aimed at kids!

Every day is a different theme too, so check out the Kids Week schedule. We hit the deck on Sunday for “Science Meets Science Fiction” Day. Or as I like to call it, Star Wars Day! Despite the freezing temperatures outside (and the crazy hot temps inside!), we had a fantastic time.

The first real exhibit we visited was from the Museum of Math. They had a number of fun, interactive exhibits to test your kids math and creative thinking. 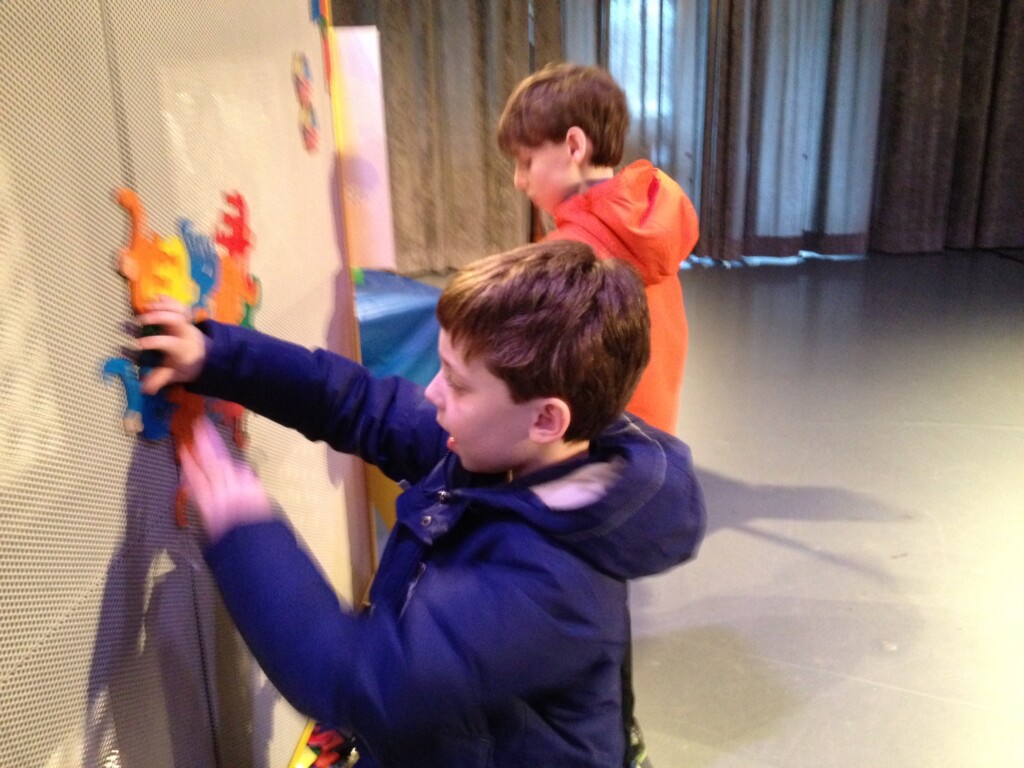 Using different shaped magnets, Jason and Ryan were challenged to fill up every square inch of that board! If you look closely at Ryan’s magnets, those are different colored monkeys that magically fit together! Ook! 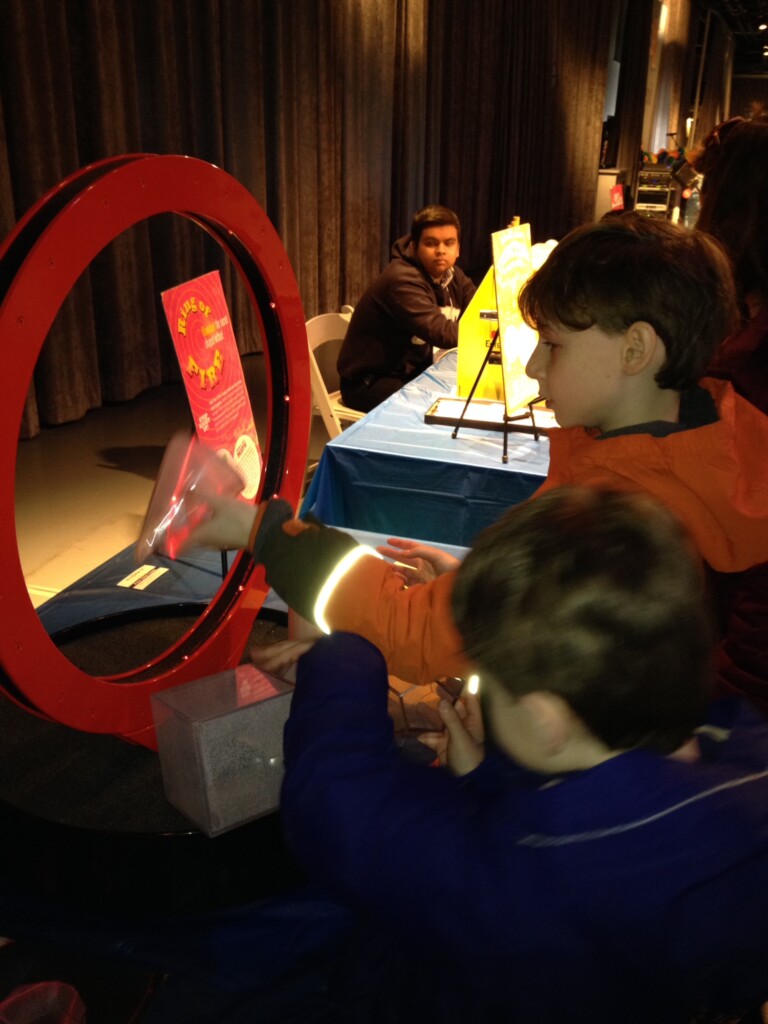 Stick your hand in a laser and try not to get it cut off! No, no. I’m kidding of course. Mostly. Grab a clear item and stick it through the Ring of Fire to create various shapes within the item.

Next up was a visit with two lovely ladies from the Coast Guard! They were showing off their super funky dry suits that can help keep you warm for hours, even in the middle of the freezing ocean. 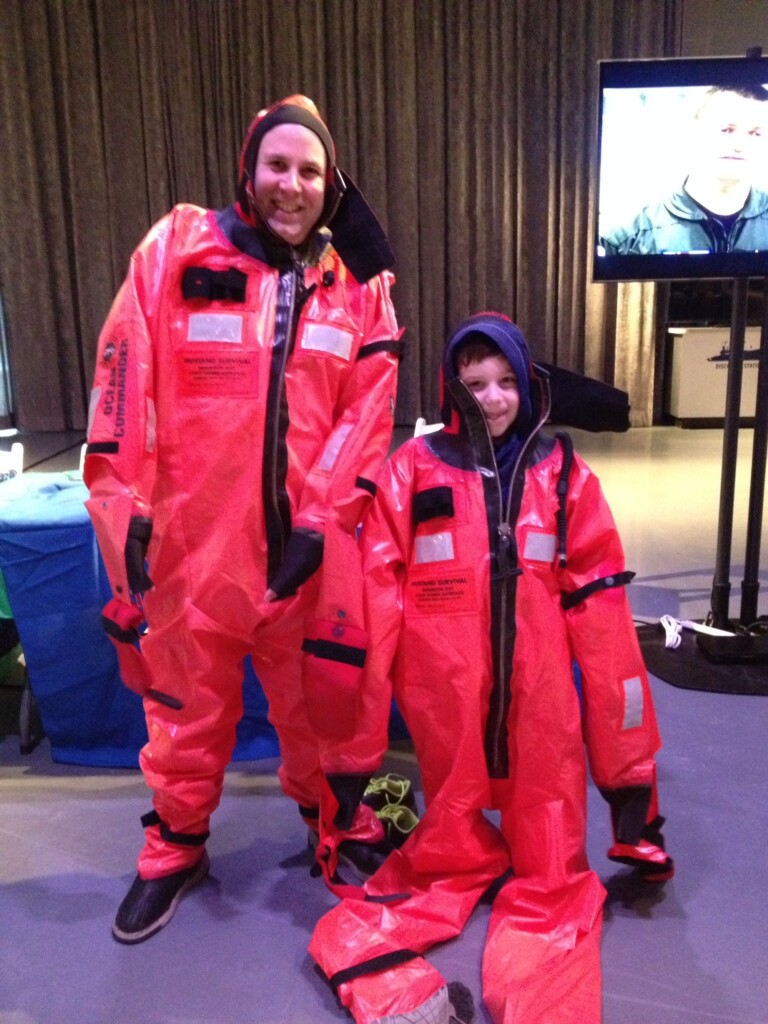 Ryan and I got to try them on. I think he might need a slightly smaller size, what do you think?

Robot building took up the next hour or so. The boys got to put together a K’NEX set of a robotic gorilla, which oddly enough, we’ve done before.

Normally I’d love doing this, but the lighting wasn’t so great and we were up on a loft where it had to be about 147 degrees or so and I was tired from being up at 6 a.m. and I was starving and… well, yeah… I needed a “time out” before we were done. 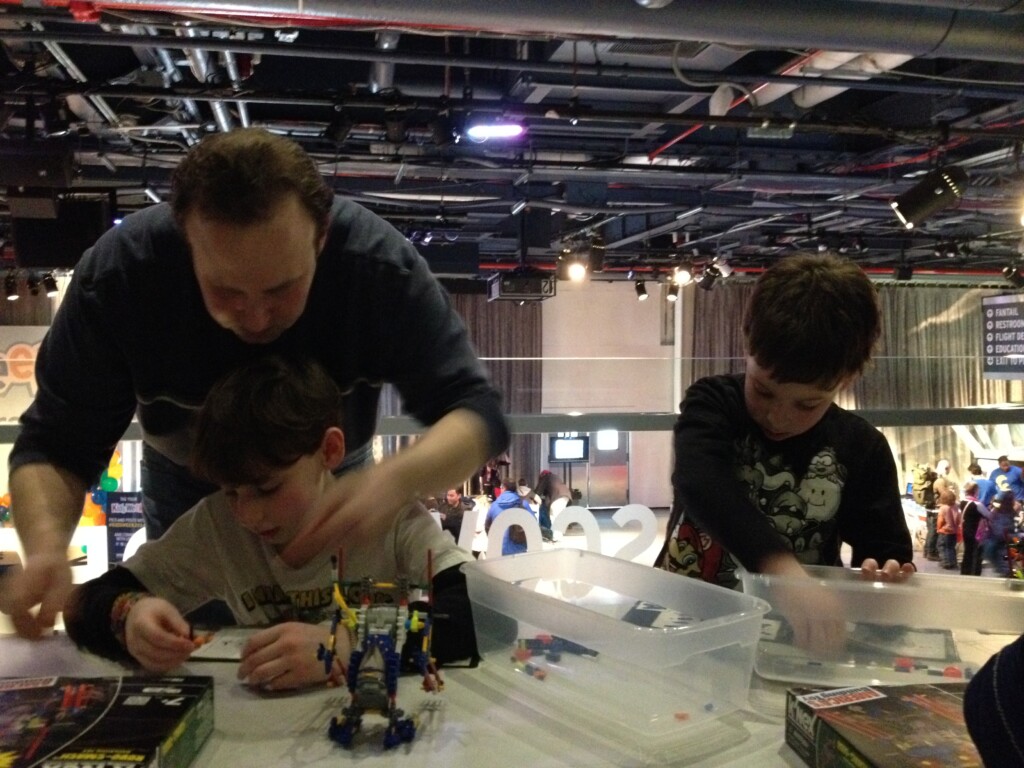 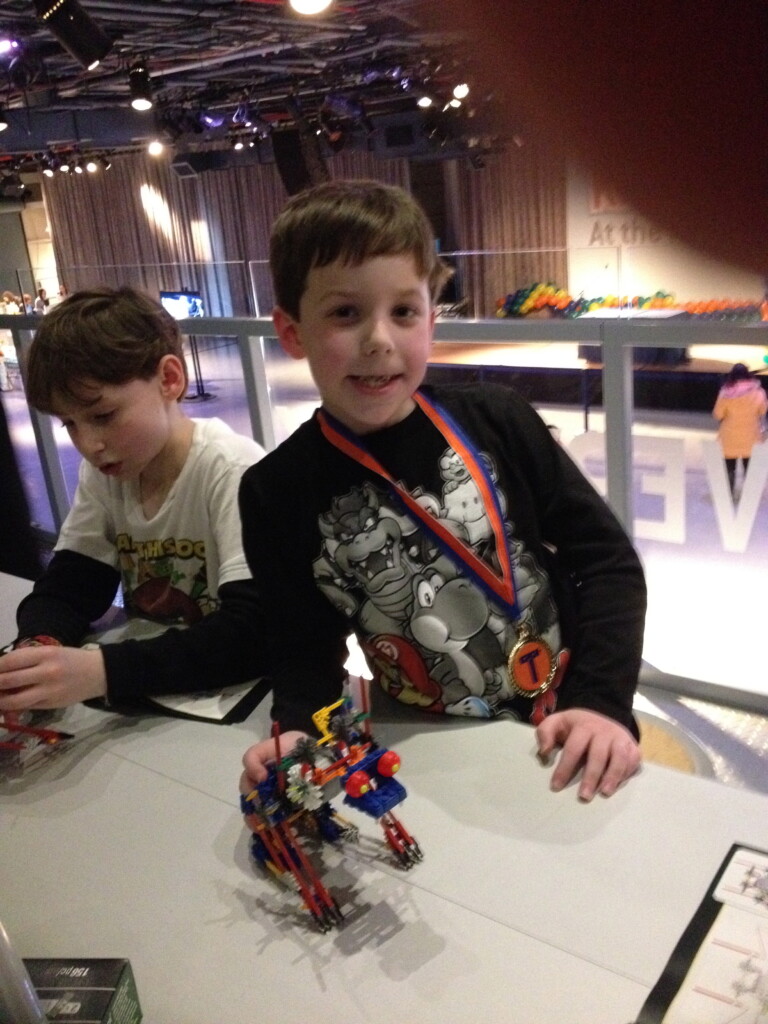 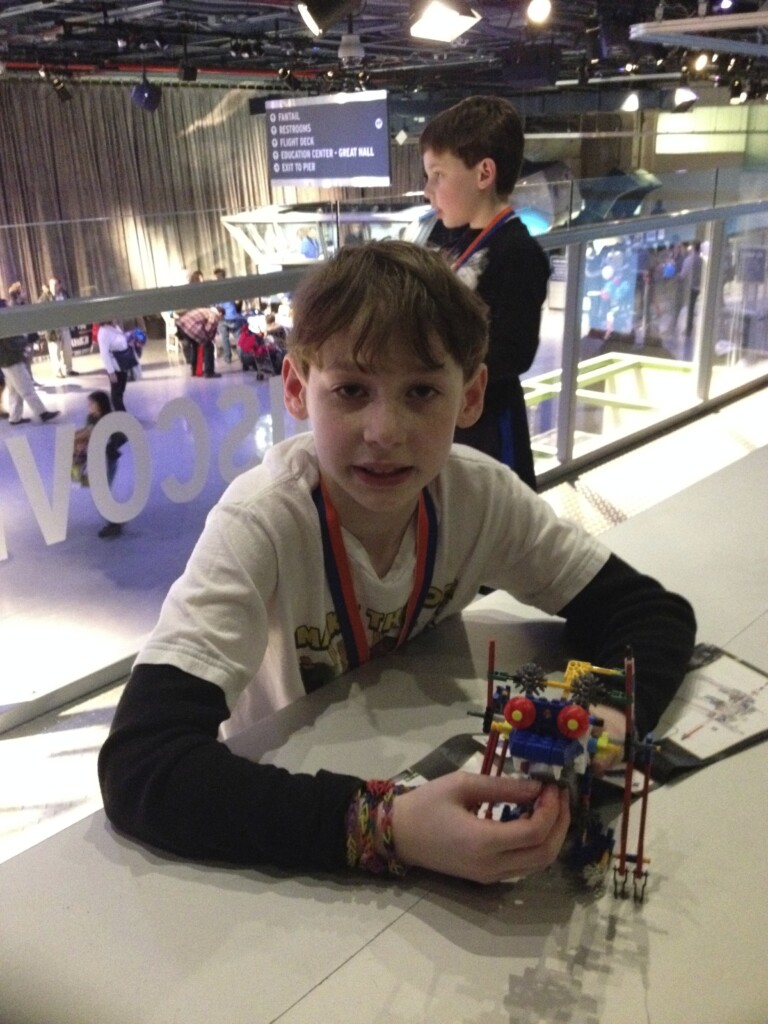 We refused to surrender, though, and for finishing their robots, Jason and Ryan each got a medal. (The “T” stands for Tinkersphere, the hobby store running the exhibit.)

Along the way, we bumped into many a Star Wars character. It was Star Wars Day after all. Members of the 501st Legion were on hand to meet and greet everyone, as well as take plenty of photo ops.

My favorite part was when Darth Vader walked into a room and cheerily made a TIE Fighter joke. A little girl stared at him wide-eyed and immediately began crying and wailing like mad. Vader uttered, “Uh oh! Time to go!” and quickly bolted outta there. Hah, some Dark Lord of the Sith. 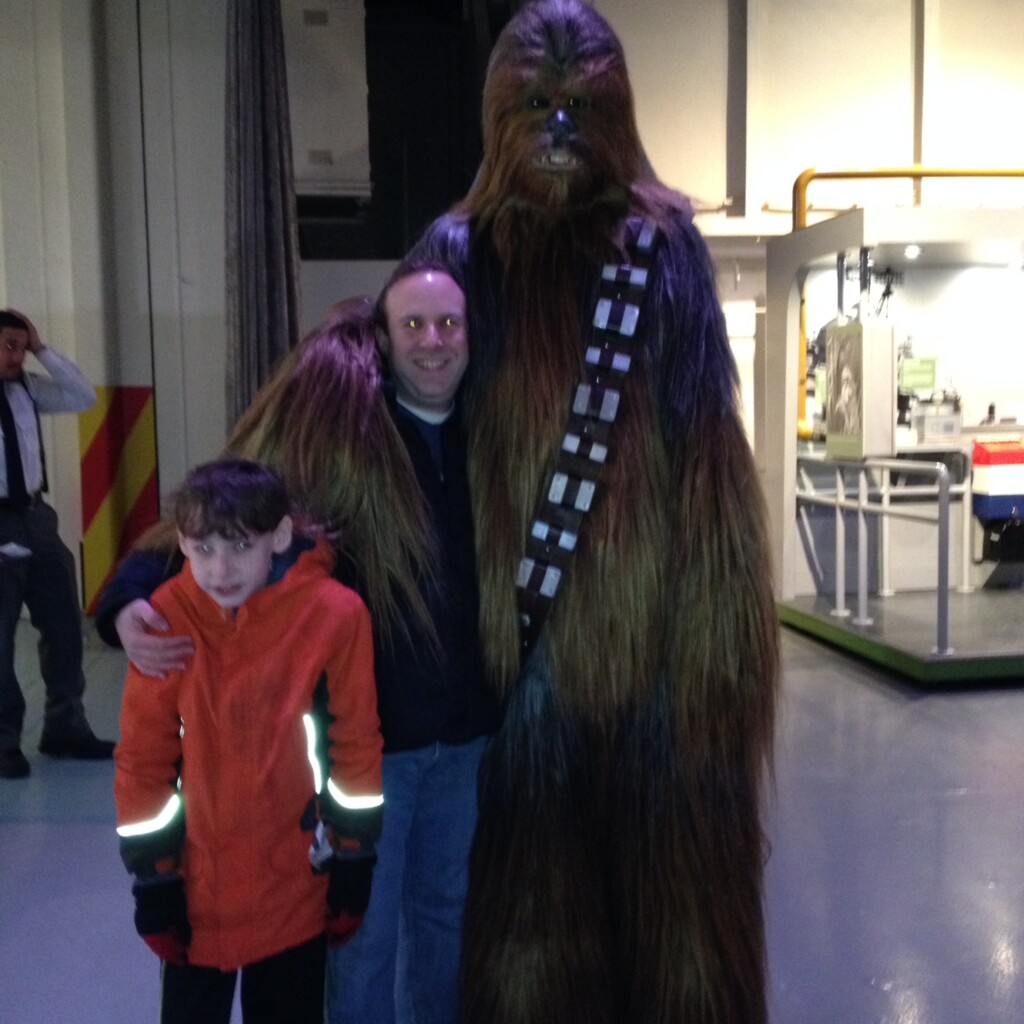 Me and my buddy Chewie palled around and exchanged “ARRRRRRRRRRRRRRS.” 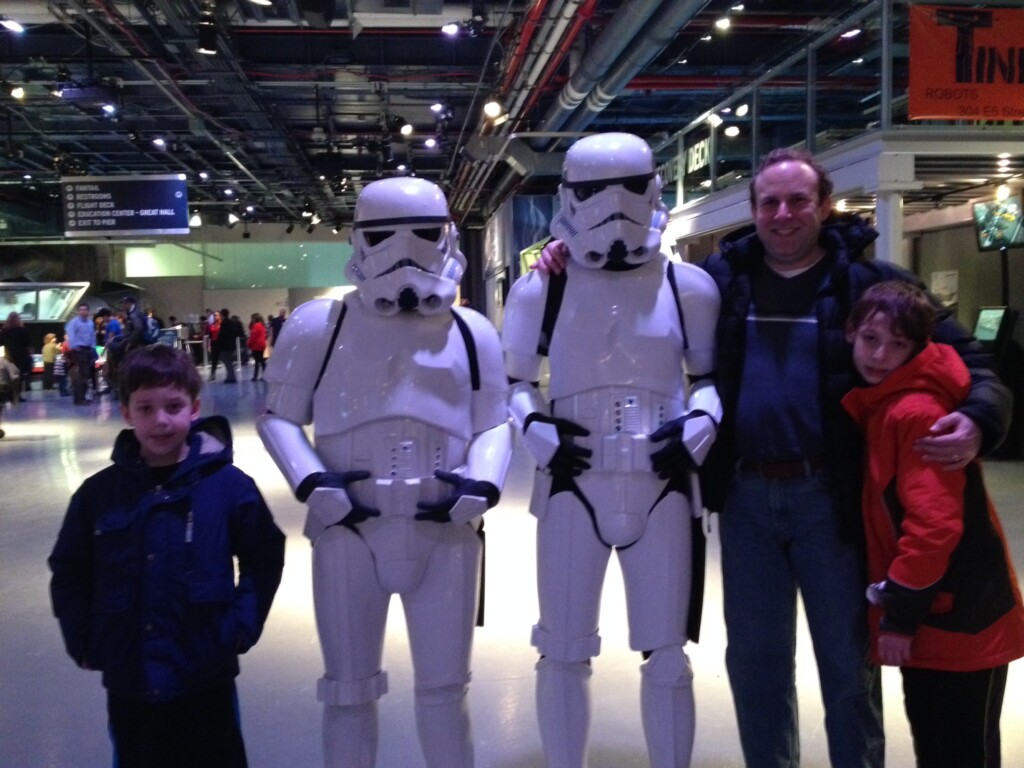 With my black coat, I fit right in with these Stormtroopers, didn’t I? 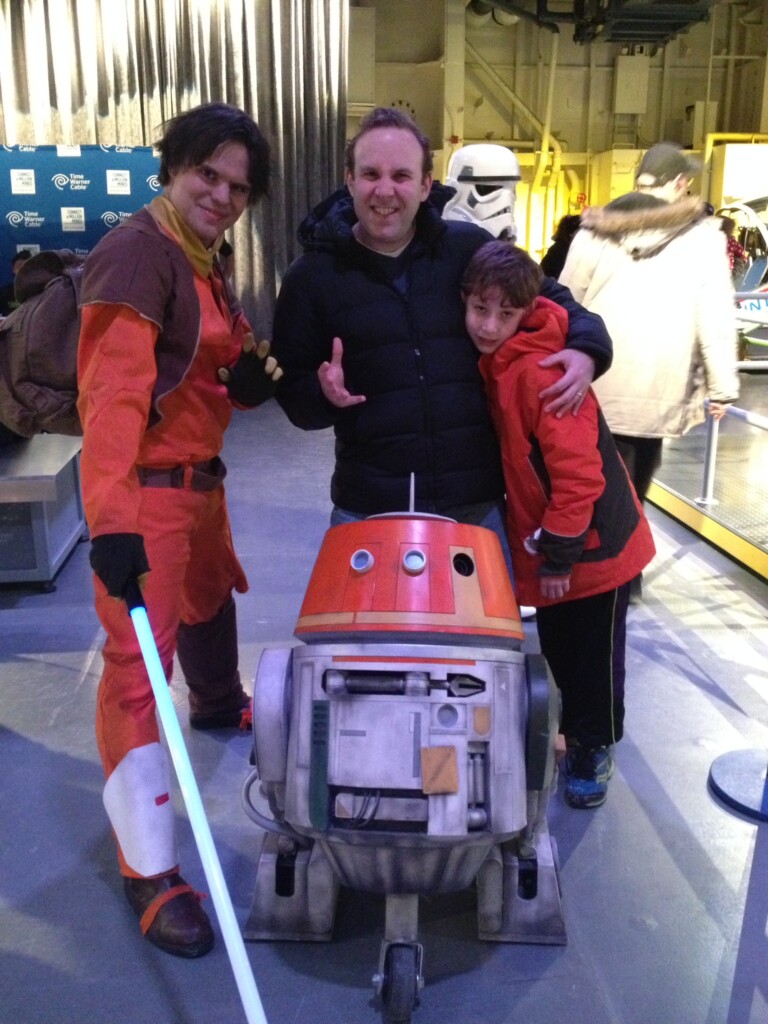 I had to have my photo snapped with this guy and robot mainly because I had no clue who they were. I thought I’d have to step up my Star Wars history studying, but as it turns out, they’re new characters from the upcoming Star Wars Rebels series coming out later this year on Disney XD. He’s some rebel guy named Ezra with his grouchy robot companion Chopper.

The boys loved getting to play around with the CubeX 3D printers from 3DSystems. They even got to design their own spaceship. 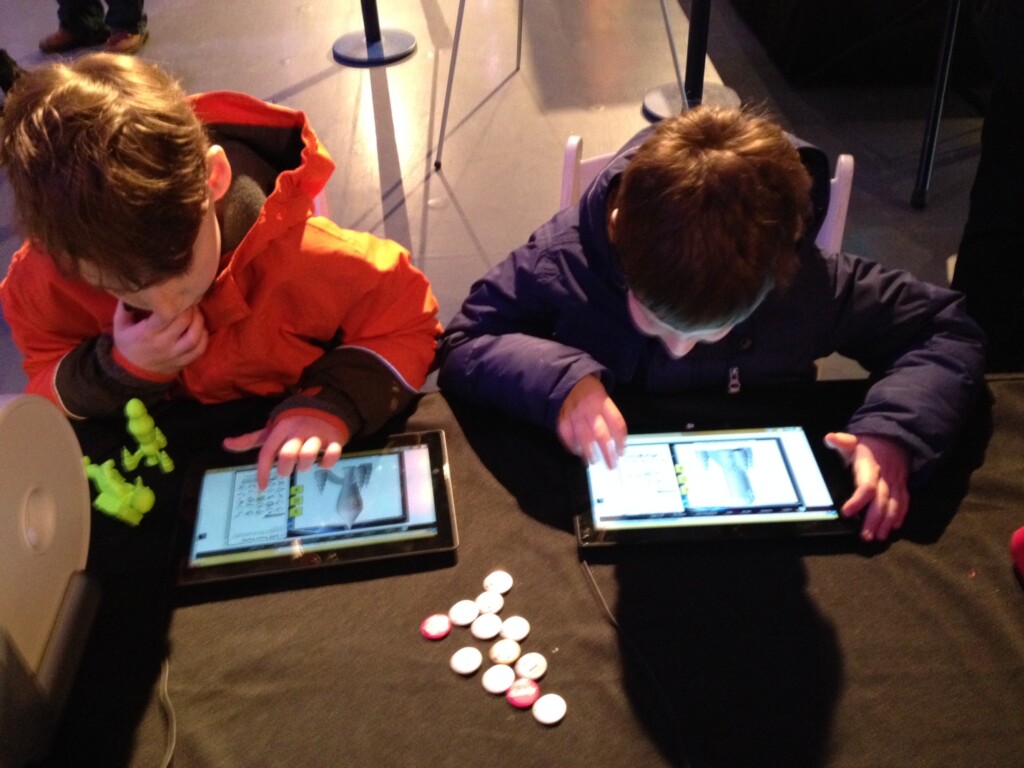 These are really neat I have to say. The only downside was having to wait a few hours because they do take time to print, and the 3DSystems guys were printing them seven at a time for everyone.

Another neat booth was the gang behind the computer-programming app Hopscotch. 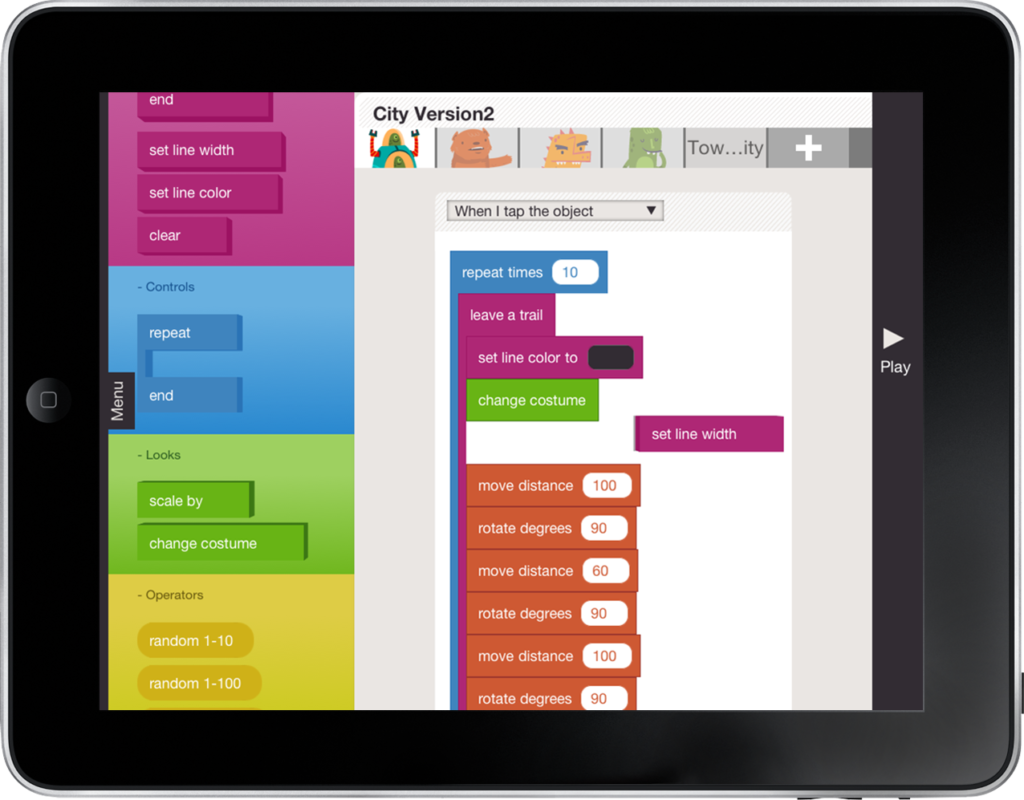 They were on hand to show the boys how to make their own iPad apps. Jason and Ryan are both real familiar with Scratch (a program that lets you build games and animations on your computer), so it was interesting to see them use this fun drag-and-drop app.

Even though we had seen the Enterprise on display down in Virginia a few years ago (Shout out to the Borak Family!), we opted to pay the money for tickets to the Space Shuttle Pavilion. 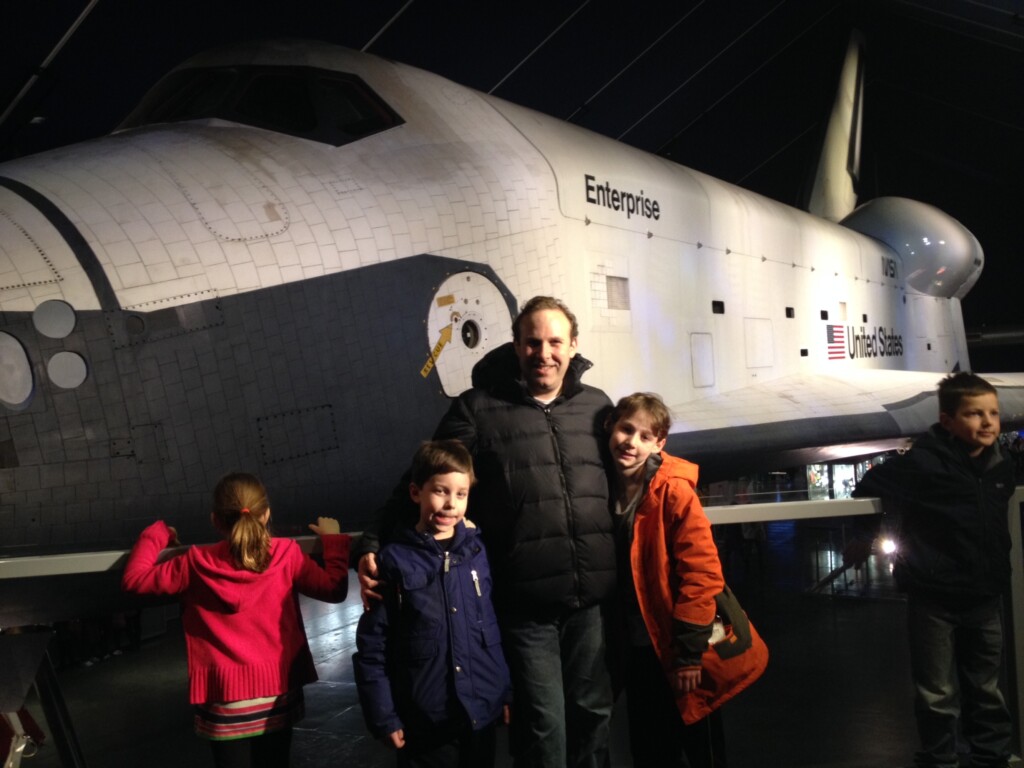 It was actually cool to get so close to the Space Shuttle Enterprise. The entire pavilion is nicely done with tons of artifacts (yes, including an old Star Trek Fan Club booklet), films and displays around.

After the Enterprise, we went back to the main floor of the Intrepid for a final walk around. 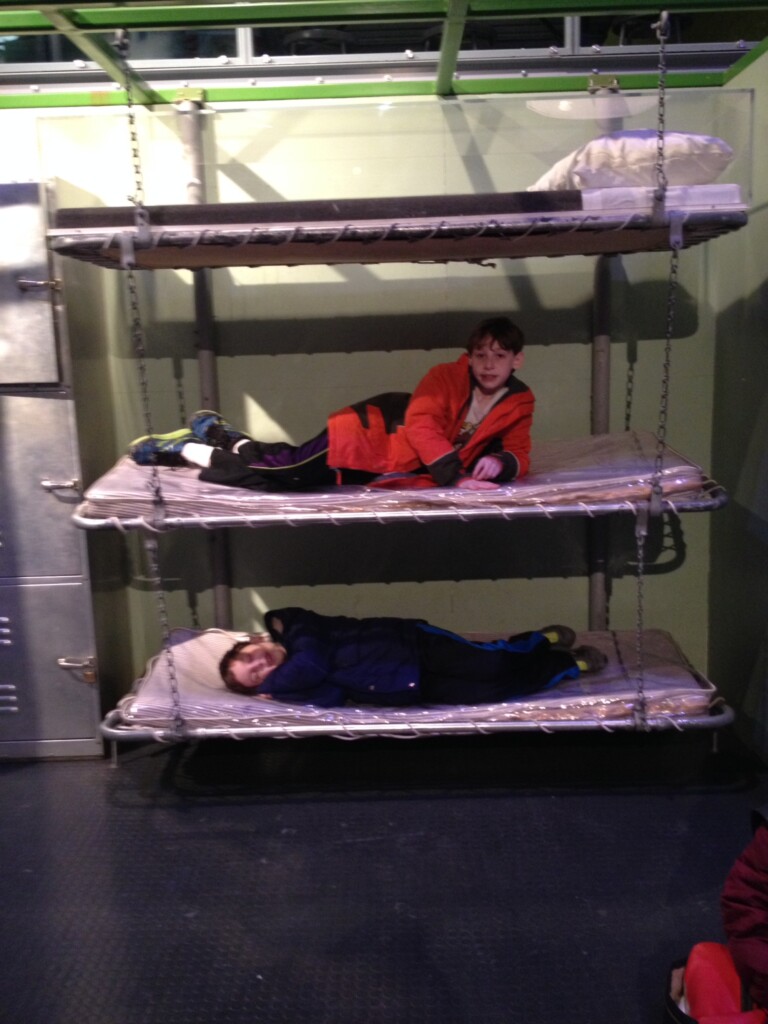 Ryan couldn’t wait to try out the triple bunk beds in the Intrepid’s main hall, so he and Jason took a little shnooze. 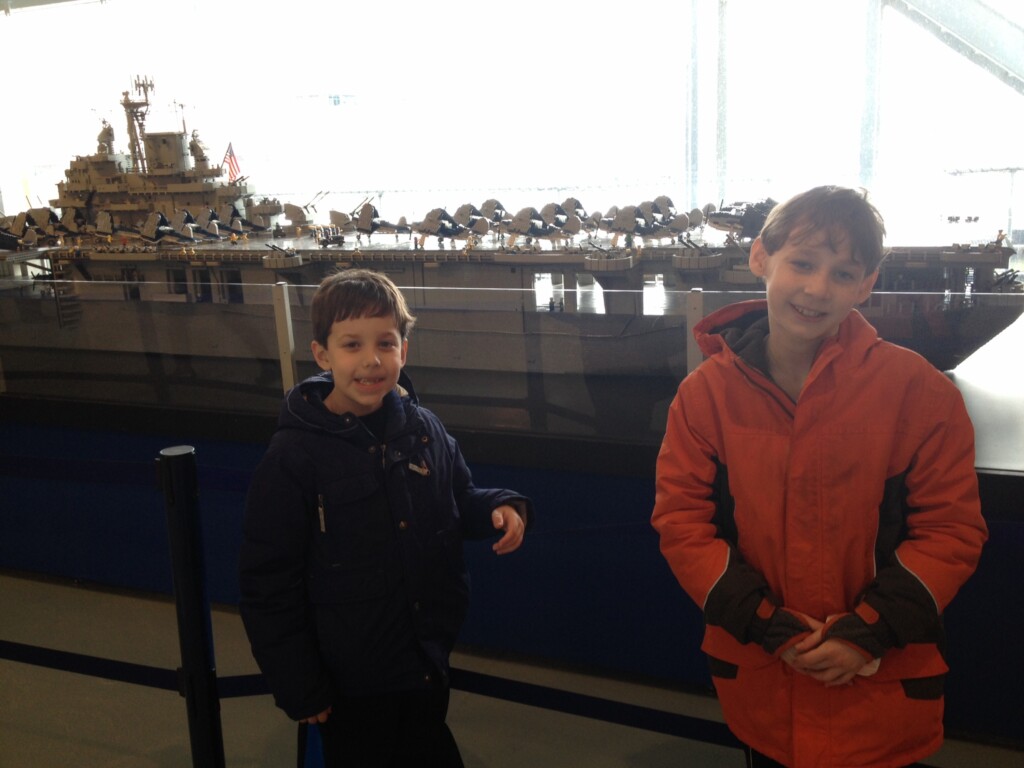 See that ship behind my boys? It’s a 1:40 scale model of the Intrepid. Built entirely out of Legos. LEGOS! You will never build anything even 1/40th as cool. 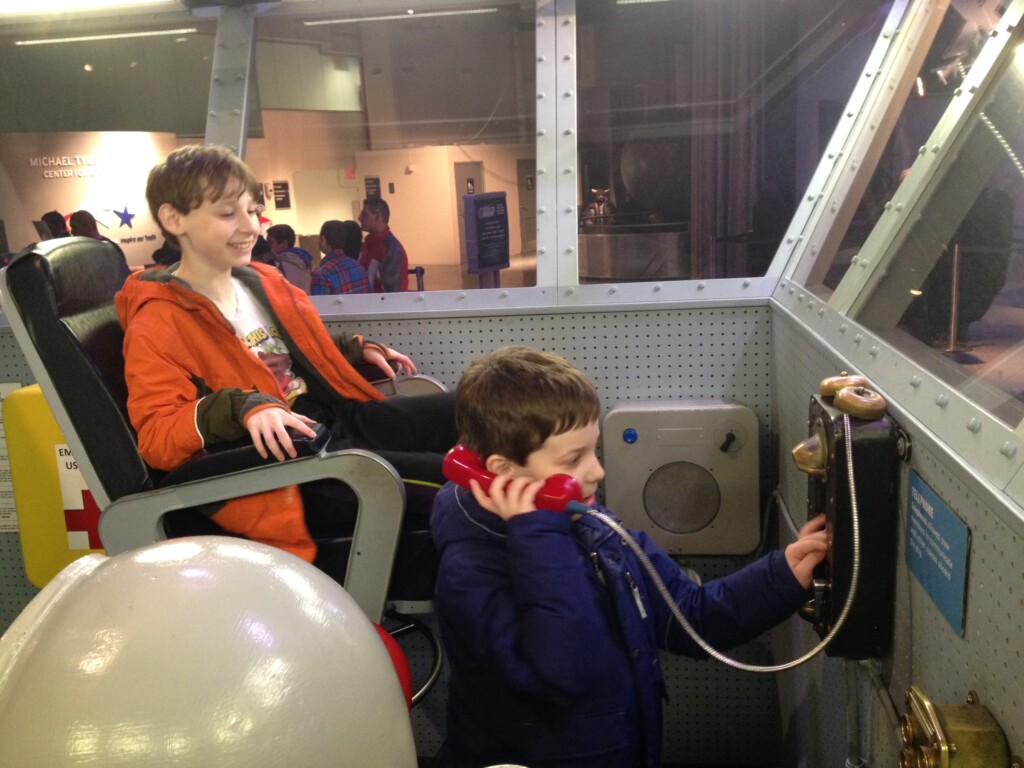 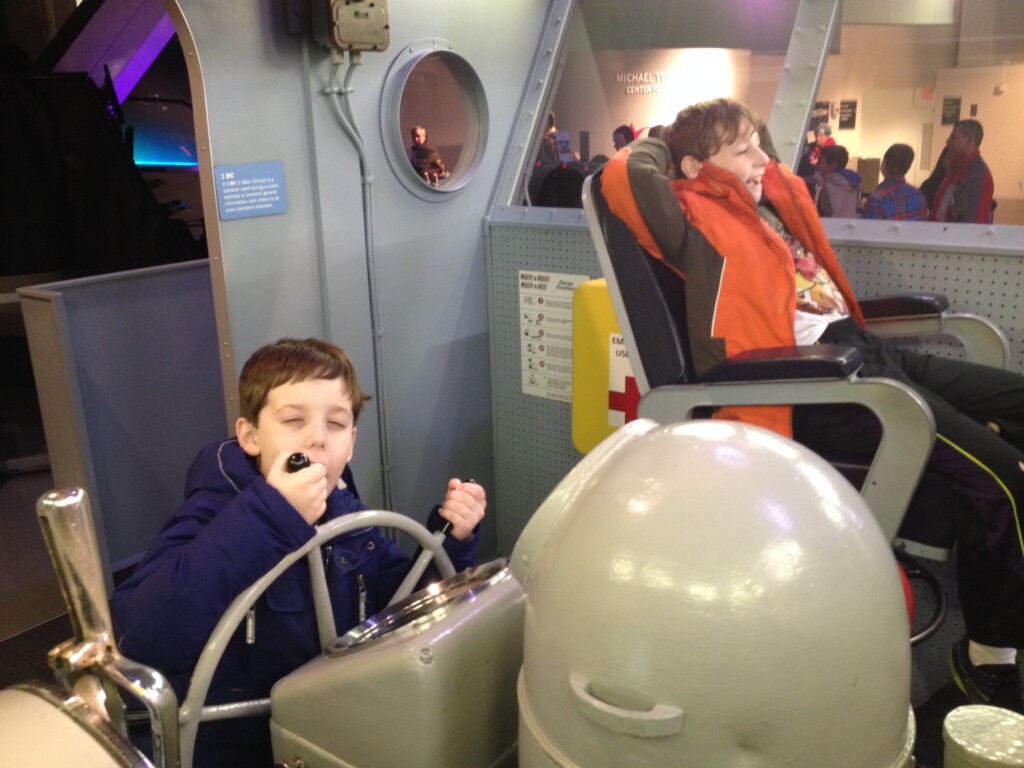 Ryan tried to order a pizza from the deck, but soon gave up to pilot the ship instead. Jason apparently thought he was on a cruise ship.

All in all, it was a long day but a fun day. I think we spent about 5 hours there and we barely scratched the surface. You can have a ton of fun even if it’s not Kid’s Week. But for extra amusement, you should head over to the Intrepid this week for loads of special exhibits, presentations, hands-on workshops, entertainment and general super coolness!

Kids Week 2014 at the Intrepid
(If you order tickets online, there’s a coupon for $2 off each ticket.) 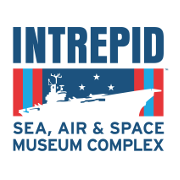 6 thoughts on “Wookiees, Robots and Math at the Intrepid #Kidsweek2014”