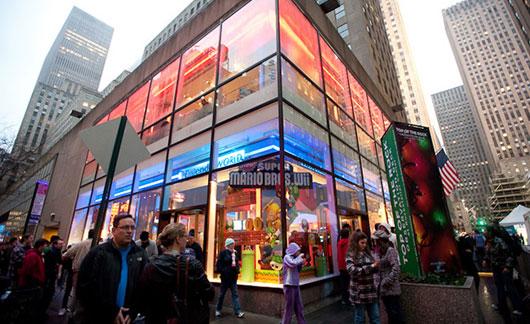 We spent the day in Manhattan today with some family friends and had an absolute blast. I won’t bore you with every sordid detail, though I will be doing a follow-up post on our crazy fun trip to Madam Tussauds wax museum. So stay tuned for that one.

Personally, I’m not a big fan of New York City. Not that I’m a country boy by any means (though I do love me some Dukes of Hazzard!), but growing up in the suburbs, I’ve always liked an occasional visit to the city, but that’s it. It’s just not that convenient to get to from where we live (unless you drive, which can take forever with traffic), and it’s generally so incredibly crowded, I just can’t enjoy it.

Today we had gorgeous weather and since we got to Manhattan bright and early, it wasn’t even that crowded. We actually spent about 9 action-packed hours in the city today and there were only a few scant cranky moments!

The highlight of our trip, though, was hitting the Nintendo World Store which is in Rockefeller Center. I’d been there a few times before, but never with my kids, so this was extra neat. If you’ve never been here before and your kids are fans of Mario, Pokemon, or just Nintendo in general, it is definitely worth the trip.

We got to the store a little after 1 p.m. and noticed a sign saying that Mario would be appearing today from 12-2 p.m. So we looked around for a guy dressed in a Mario costume and didn’t see anyone. There was nothing around except a huge monitor in front of us with an animated Mario on the screen. We figured he wasn’t coming at all. We figured wrong.

All of a sudden, from the monitor we heard Mario say, “I like a your Mario shirt!” Jason had been standing right near the monitor, and was in fact wearing a Mario T-shirt. After a few quick comments and questions, we realized that this animated Mario was indeed interacting with us.

His voice and mannerisms were pure Mario, but he answered every single question or comment we had, and clearly knew what we looked like and what we were saying to him. I wish I had thought to snag a video of it sooner, but at least I taped the last few seconds of our conversation with the big guy.

If you’re in New York City, looking for something a bit different and fun, grab the kids and head over to Nintendo World. No Princess-Saving Experience necessary.
Share2
Tweet
Pin
2 Shares

1 thought on “It’s A Awesome! Our Visit to the Nintendo World Store”