A Star Wars movie wouldn’t be a Star Wars movie without droids. You can rest easy, though, because SOLO: A Star Wars Story doesn’t just have droids, it has L3-37. Played by the highly talented Phoebe Waller-Bridge, L3 isn’t just any old droid. Uh uh. She’s hellbent on liberating all droids from enslavement.

It may sound ridiculous, but L3 is 100% serious. She obeys her master Lando Calrissian, but not without tossing a few sharp verbal jabs his way any chance she gets. She’s a co-pilot with probably the greatest sense of direction this side of Google Maps.

On a recent blogger trip to Los Angeles, dubbed #HanSoloEvent, myself and 24 other bloggers had the privilege of sitting down with Waller-Bridge to discuss her entrance into the Star Wars Universe and how her brand-new character practically stole the SOLO show.

With a captivating British accent, Waller-Bridge just exudes joy. She clearly loves acting and is still in awe at the opportunity that came her way in the form of SOLO: A Star Wars Story. During our conversation a number of interesting tidbits surfaced. To get to know this rising star better, here’s a look at 7 things you need to know about Phoebe Waller-Bridge before meeting L3-37.

Phoebe Waller-Bridge has a confession. Before acting in SOLO: A Star Wars Story, the actress had never seen a single Star Wars movie. “I did know about Star Wars,” she admits, but, “Yeah, I hadn’t seen any of the films.  I know. I think there’s like five of us in the world. But, yeah I hadn’t. Which I think in some ways worked in my favor because I was very loose in the audition with the idea of what a droid was. I’m like, ‘Oh. Is she not a person?’ [Laughs]. But I loved the films so much. I’m completely obsessed now.”

2. L3-37 is the spokesdroid for Droid Liberation

Ever felt bad for all those R2 units with their restraining bolts and no free will? Then you’ll love L3-37, who acts as a very vocal spokesdroid for Droid Liberation! “It’s so cool that she’s got a cause, you know,” explains Waller-Bridge. “She’s like a social justice warrior. She’s a droid with an agenda that goes beyond her own existence, and that’s very unique. It’s good to have a message”

3. Phoebe Waller-Bridge didn’t really need to act for her role as L3-37

When it came time for Waller-Bridge to bring L3-37 to life, she had all sorts of grandiose plans to get into shape (physically and vocally) for the role. But the studio didn’t need any of it at all. They loved her just the way she was.

“I was ready to do all sorts of preparation,” she said. “I was like, ‘Do you want me to work out s I can carry the suit stronger?’  And they were just like, ‘No, no. That little weird, awkward walk you’re doing is actually perfect.’ [Laughs] And the same with the voice. I would offer something droidy and they would be like, ‘Stop that. Pull it back.  Be more natural.'”

For a character that doesn’t even have any flesh and blood, L3-37 certainly has plenty of heart. And humor. So how exactly did Waller-Bridge manage to bring that to life?

“Aw, well, I can’t take full credit for that,” she explained. “The script does that. But I think you have to sort of start at the heart with any character, no matter what they’re made out of.  [Laughs] And I felt like she had a huge amount of heart and passion, and even though she sort of wakes up halfway through the film to what her passion is, it’s nice, knowing you’re building to something like that as well.  And humor as well. Where there’s humor, there’s heart, and I think she’s got a lot of it.”

Believe it or not, L3-37 is involved in a love story. That’s definitely not your typical arena for a Star Wars movie, at least when there’s a droid involved. Yet, Waller-Bridge manages to get across droid love without it crossing the line into complete ridiculousness. Instead, the entire thing comes across as incredibly emotional. So how’d she do it?

“Well, it’s so brilliantly done,” she said, “because they aren’t sort of like batting eyelids at each other, or anything like that.  You don’t see these kinds of longing looks. It’s not that kind of love story. It’s a love story that surprises you. And I think it’s one because they are so rude to each other, and, you know, sometimes, when people are rude to each other and they can take it, that’s a sign of love in itself.  So I think it’s always about playing the opposite and letting it be a surprise for the audience.”

6. SOLO and all of its characters are an inspiration to us all

“SOLO is a film celebrating individuality and individual causes,” said Waller-Bridge, “and having the courage of your own convictions.  But also, there are so many amazing relationships in it, and I think it’s inspiring. The trust it takes to partner up with somebody; I hope that inspires them as well.”

7. Phoebe Waller-Bridge screamed on a bus

When you’re in a Star Wars movie, there’s no doubt that even the greatest of actors will find themselves awestruck. How you react to that realization can say a lot about your character. In Phoebe Waller-Bridge’s case, it literally screamed.

“There was the one scene on the Millennium Falcon, that was a big one,” she said. “I let out an involuntarily scream when I saw the Falcon, and I did that when I met Chewbacca.  But the big one really came, like, two weeks after we’d wrapped. I was just on a bus going to go get a sandwich somewhere in London. I suddenly just went, ‘What just happened?’ I called my sister and I was just like, ‘Was I just in a Star Wars movie?’ She’s like, ‘Yeah. Love, yeah. We came to set. We saw the whole thing.’ My God. How did that happen?” 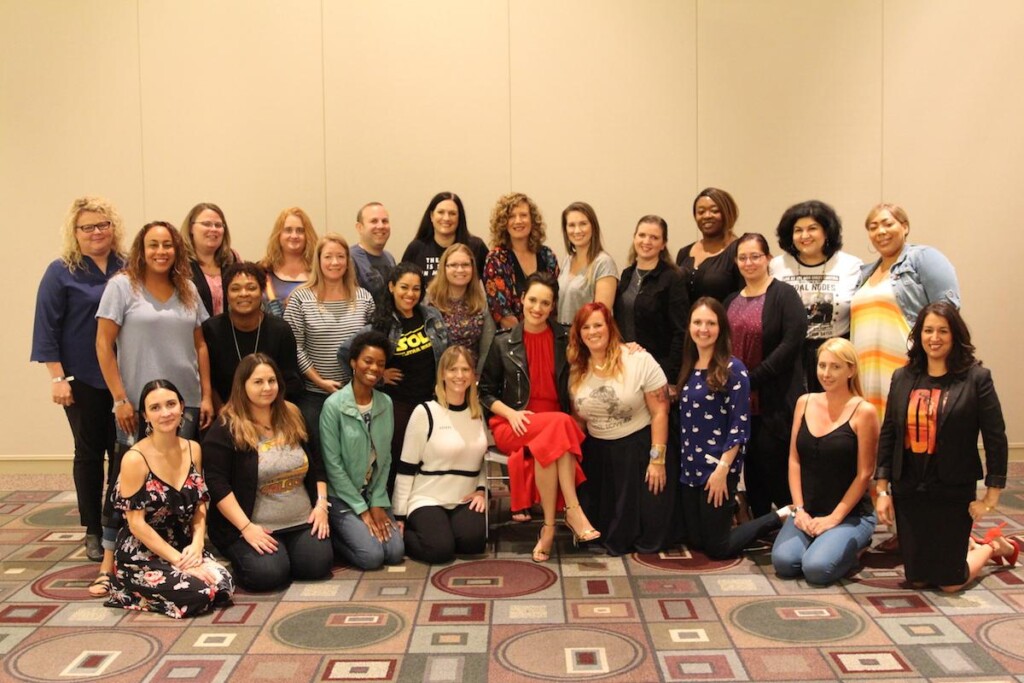