With a heart as big as his shoe size, Joonas Suotamo was clearly born to play Chewbacca. The nearly seven-foot tall actor took over the mantle of Han Solo’s famous Wookiee sidekick with Star Wars: The Force Awakens. Original legendary actor Peter Mayhew graciously passed the torch over to Joonas, and the big guy hasn’t looked back.

A basketball player at Penn State University, the Finnish actor also played in Finland’s basketball league, as well as for the Finnish national basketball team. But acting was his true calling and playing the lovable walking carpet seems the perfect fit for Suotamo.

In SOLO: A Star Wars Story, Suotamo plays a younger Chewbacca, one who hasn’t quite met and partnered up with Han Solo just yet. Still, it’s clear that the Gentle Giant exudes the same warm, sensitive side on the inside. From the moment he walked into the room with myself and two dozen bloggers during the recent #HanSoloEvent in Los Angeles, California, Suotamo was grinning from ear to ear.

A slight Finnish accent, Suotamo spoke slowly and deliberately, chuckling quite often at the wonderful opportunities that Star Wars has given him. He seems to love life and is having a blast playing Han Solo’s co-pilot. Yet he also has great respect for everything Star Wars, both past, present and future.

How long did it take you to learn to speak like Chewbacca?

Joonas Suotamo: When they told me I’m going to meet Harrison Ford the next day, it took me 24 hours.

What was it like meeting Harrison Ford for the first time?

It’s great. And I think I was so nervous the first thing I said when I saw Harrison was, “Harrison, oh, boy, I wasn’t even born when you guys made these films.” And he did not like that very much. We were able to climb over that hurdle and start again. [Laughs]

How did you make the jump from basketball player to professional Wookiee?

I got the role when out of the blue sky came a call one day from the Finnish Basketball Association, who had received a request for a person who has blue eyes and is seven feet tall. Casting was pretty desperate at that point to find one and they called me. I didn’t even take a second to think about it. I didn’t know what the role was, so I just said, yes, whatever it is, I’m in.

I filmed a video of me playing a caveman, half naked in my old high school gym. Just the kind of video where I grunt and this caveman gets shot in the knee with an arrow. They wanted to see if I could do the acting required for the film. It took four or five months to really go through the process. At the end of it, I received a call that, congrats, you are going to play Chewbacca.

Did your years of playing basketball prepare you for the strenuous stunts in the film?

I think basketball certainly gifted me extra body awareness, along with the trips I made with various teams and the national team of Finland. I met so many wonderful players and people, and I grew up to become a very social guy. I have always observed movements and I have always tried to imitate, in a very loving way, my teammates and how they run.

That alongside growing up with dogs and observing them when I was a kid secretly prepared me for the role of playing Chewbacca. [Laughs] And on top of that, we Fins have a very rich sauna tradition. So, I can withstand heat exceptionally well.

What is the biggest challenge with wearing the Chewbacca suit?

I think it’s the fact that every day you need to have someone poke your eyes with makeup just to hide the white of my eyes. Getting into the suit, while lovely, is also filled with hidden dangers, like hair coming through between the mouthpiece and the suit and going into my mouth. And also my eyes constantly… Maria Cork, my handler on set, has to be with pincers, to get those hairs out of my eyes.

The biggest one probably is just respecting the legacy of Chewbacca, because he was played by Peter Mayhew, the legendary, original Chewbacca. And I want it to be so that the fans going to these films see the same Chewbacca who was in the original films, because Chewbacca is so loved and I would not want it to somehow feel different this time around.

Did you consult with Peter Mayhew?

Yes, I consulted with Peter. We called it the Wookiee Bootcamp. [Laughs] He showed me the original films and clips. And we looked at his walk, and he told me why he did it such a way and what he did and what was he thinking at the time. It was so helpful, because I had done some studying up myself previously. And to hear from the master himself how and why did he do those things helped me tremendously in preparing for this role.

I went to his trailer and [Peter and his wife Angie] really embraced and gave me their blessing to play this part, which was a huge deal for me, because Star Wars is so beloved that I would hate for there to be any bad water when we do this. It must be hard to let go of something that you dedicated your life to and when the fans love you so much. But I’ve assured them that he’ll always be the original Chewbacca and there’s no one who can take that away from him.

Chewie has the bag on at all times. What was in your bag?

Mainly it’s empty, but on certain days when kids come visiting the set, I usually put in some chocolates or sweets so that after they run away frightened when I appear, they come back. Some kids are scared and I think it’s the ones who don’t know the character that well. But when they come back I usually bribe them with sweets. [Laughs]

Action scenes can be difficult enough to film. How does the Wookiee suit make it even more challenging?

The main obstacle is the heat and the endurance throughout the day. But also it’s the fact that I have to be careful with the suit. They don’t want me doing everything I can.  If I would make a roll suddenly on the floor, Maria would be very, very angry with me. [Laughs] So, I have to be careful.

But I also have to do what’s required of me by the director. And that’s something, because you have to constantly be aware of the suit, how it moves and how it looks on camera. That’s why I have to go and look at the screens after the takes and make people think I’m sort of a diva or something. I just want to make it look right.

What was it like stepping on the Millennium Falcon for the very first time?

It is just the marvelous thing, because your mind goes back to the times you saw the movie and the first time Luke put on that helmet and battled against the floating ball, which I still don’t know how they did that. [Laughs] And it’s just like you know all the angles that they used. And it’s wonderful to be there, because it’s part of everyone’s childhood and memories. And now when the Millennium Falcon is new and well-kept and there’s a mini bar in the corner, there is a cloak cape closet which is more like a luxury room than a closet, it’s just wonderful to see that difference. And it goes to deepening my appreciation for the ship, because it has a history now.

How was it different in this film playing a younger Chewbacca, who kind of becomes the Chewie that we know?

Chewbacca is in a very bad situation at the start of this film. So, I approached it as Chewbacca is very much looking for a way out and going on his own somewhere. Because he has a family, he has a commitment to his tribe. He walks around with worry on his shoulders, because he doesn’t know where this road will take him. And this movie also shows what that new life for Chewbacca is going to be and if he will take that.

It was very interesting to do, because he doesn’t have any kind of structure in his life at that point. And we talked with Alden [Ehrenreich, Han Solo]. We talked a lot about the arc of their friendship and how to start that journey together so that the audience will see the development and also the downs and the ups of that relationship. And it was very important to get right, because we all want to see how that relationship started. 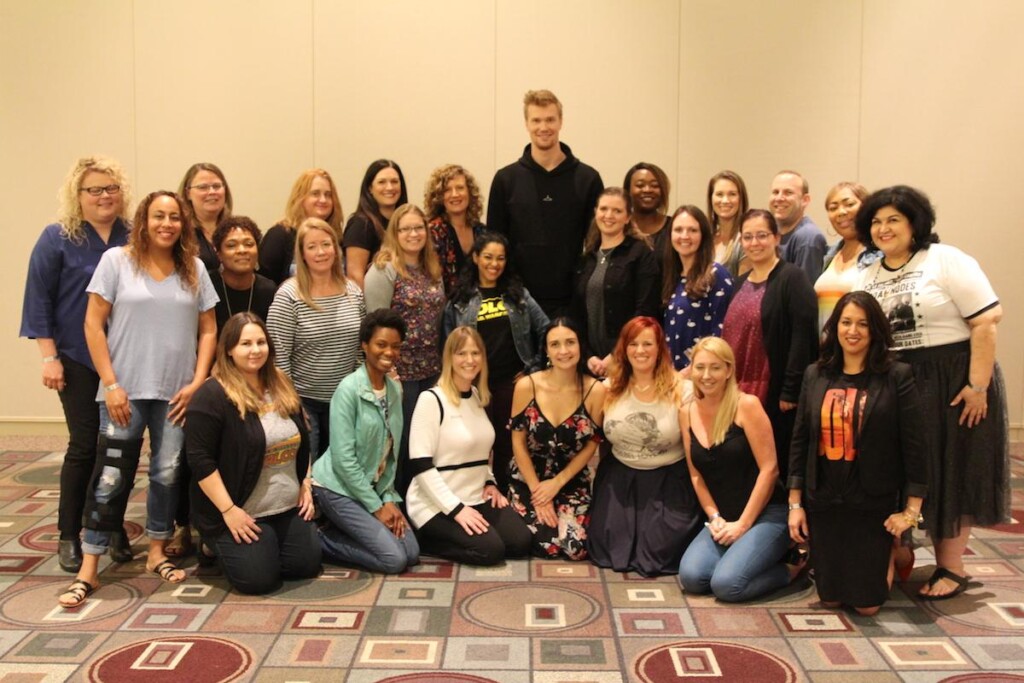