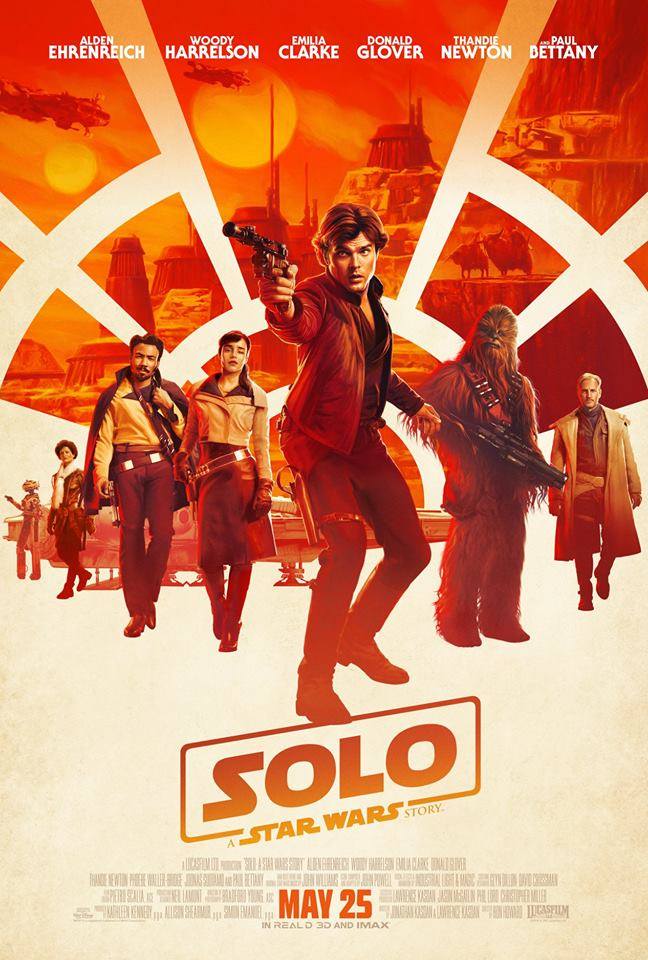 I’ll admit. I honestly was a little skeptical when I saw the first trailer for SOLO: A Star Wars Story.

I already had my reservations, as I’m not a big fan of prequels simply for the fact that they remove the threat of uncertain death from the film. I mean, we know Han Solo ends up meeting Luke Skywalker and Ben Kenobi at the Cantina Bar on Tatooine in Star Wars: A New Hope. So short of being cloned, there’s no way Han was going to bite it in SOLO.

That said… I am ecstatic at how wrong I was. (Not the cloning or death part, but the movie itself.) SOLO is nothing like what the trailers set me up for and yet it is everything that I absolutely love about Star Wars. This movie is jam-packed with action, humor, new characters, introductions, mysteries resolved and new ones dropped in our lap.

About SOLO: A Star Wars Story

Board the Millennium Falcon and journey to a galaxy far, far away in “Solo: A Star Wars Story,” an all-new adventure with the most beloved scoundrel in the galaxy. Through a series of daring escapades deep within a dark and dangerous criminal underworld, Han Solo befriends his mighty future copilot Chewbacca and meets the notorious gambler Lando Calrissian, in a journey that will set the course of one of the Star Wars saga’s most unlikely heroes.

Read on for my spoiler-free review of SOLO!

Above all else, SOLO is 100% pure fun. And that, to me, is what is so unbelievably amazing about the Star Wars Universe. The Original Trilogy had all sorts of danger but it also completely embraced entertainment. Getting stuck in a garbage compactor! Becoming popsicles on the ice world of Hoth. Chilling with the adorably dangerous Ewoks. No matter the movie, these were characters that you wanted to just hang out and binge watch Netflix with on a Saturday night.

SOLO fits in seamlessly to the entire Star Wars Universe, filling in a number of gaps in Han Solo’s past including how he came to own the Millennium Falcon and even how he first met Chewbacca the Wookiee. I won’t give any spoilers at all except to say that just about everything that is explained not only fits in with continuity, but it makes a ton of sense. The Han and Chewie meet-up is probably one of my favorite parts of the film. 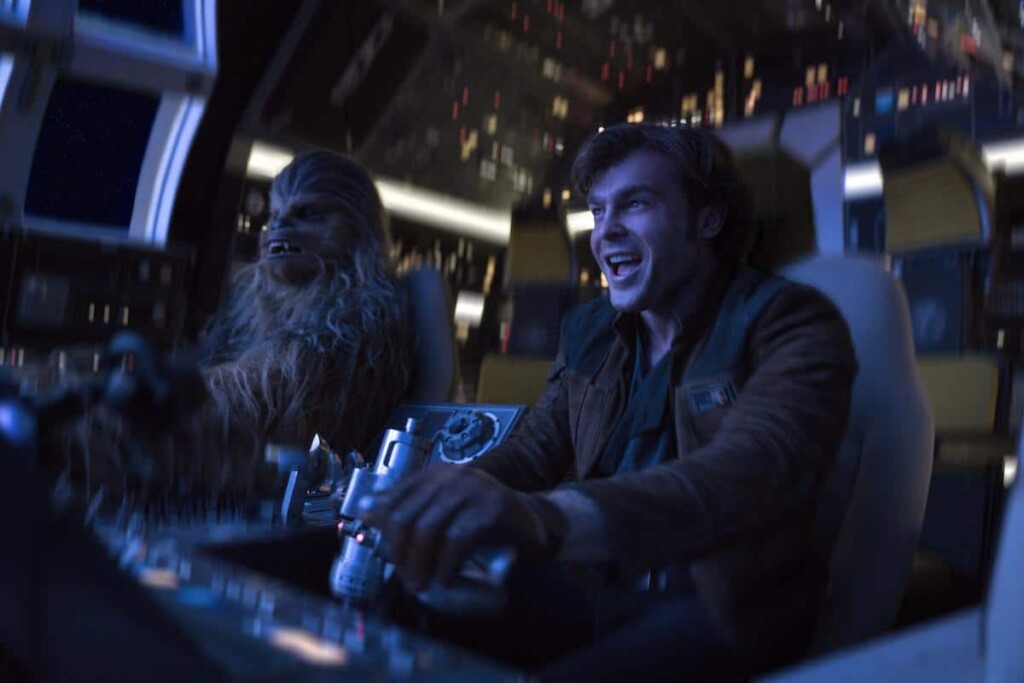 As for Alden Ehrenreich as the young Han, what can I say about him except he nailed it. He’s probably 50% Harrison Ford and 50% his own man, which is 100% perfect. He’s young, a bit cocky and a bit of a scoundrel. A scoundrel with a heart of gold, that is. By the end of the film, I seriously believed I was watching a younger version of Harrison Ford, as I could easily see how Ehrenreich’s Solo grows up to to be the smuggler centerpiece in Jabba the Hutt’s palace.

Even Harrison Ford himself agrees. During the SOLO press junket, Ford completely surprised Ehrenreich by sneaking up behind him to crash his Entertainment Tonight interview. The two hadn’t talked since before filming had begun. Take a look:

The chemistry between Ehrenreich and Emilia Clarke is also quite natural. Clarke (who plays Daenerys Targaryn on Game of Thrones) plays Han’s love interest Qi’ra, not an easy feat considering every fan knows that Princess Leia is his true love, right? The two have apparently grown up together and are quite the thieving couple on the planet of Corellia.

Peter Bettany (Vision from Avengers: Infinity War) trades in his yellow cape for a black one as he plays one nasty villain Dryden Vos. A big fan of intimidation and torture, Dryden is easily born from the Empire but has a real maniacal bent to his character, one that we haven’t really seen in the Star Wars Universe to date. Even Woody Harrelson’s Tobias Beckett comes across as a lovable grump. He’s a thief who quickly becomes a mentor for Solo as they plan some pretty big heists.

Donald Glover as a young Lando Calrissian had me cracking up big time. As cocky as Billy Dee Williams was as Lando in the Original Trilogy, Glover goes a few steps further. And that’s completely believable, since most people are cockier in their younger days. His relationship with the rebellious droid L3-37 (played by the hilariously awesome Phoebe Waller-Bridge) is the best on-screen “romance” I’ve seen since the Titanic days.

Chewbacca, of course, is as incredible as always. He’s even funnier than usual and much more physical. Yes, that Wookiee can move!

As for the other star of the film? Yeah, the Millennium Falcon herself. Not so much a beat-up piece of junk, but a shiny, intact ship that’s stocked with a classy bar and a cape room. It’s amazing to see what it looked like in its prime, while still hinting at the future yet to come.

SOLO really does a wonderful job of weaving a new story into an existing one, dropping small nods to fanboys and fangirls throughout, while also setting up a whole new story unto itself. If they want, they could keep making a slew of SOLO adventures and I’d keep watching. George Lucas may not have been involved in this one, but Director Ron Howard sure did him proud.

Whether you go with your friends and family or hit the movies on your own, this is definitely a movie worth seeing SOLO.

1 thought on “Bring Friends or Go SOLO, This is One Star Wars Story You Don’t Want to Miss”