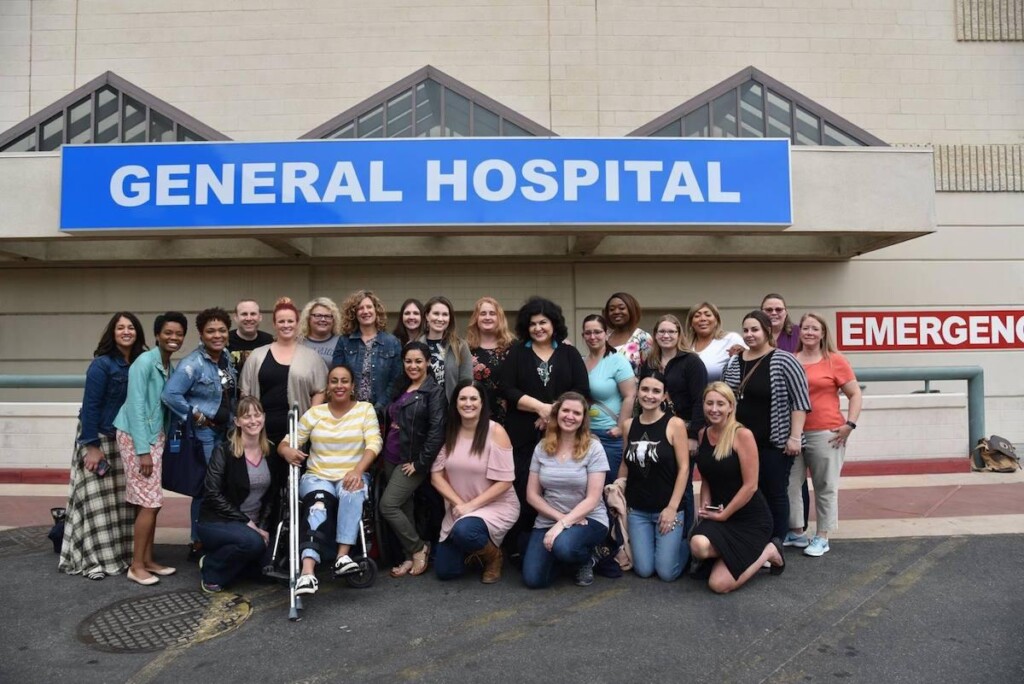 Looking back to my childhood years, I remember coming home from school to find my mom and sister glued to the TV as the latest episode of ABC’s General Hospital aired. Who knew just a few decades later I’d be walking on the very sets that they were mesmerized by.

Yep, I recently had a trip to the hospital while I was out on a #HanSoloEvent Blogger Trip in Los Angeles, California. No, not that kind of hospital. This one was more general, as in General Hospital. Yes, I actually visited the set of this insanely popular soap opera that’s celebrating 55 years on television.

Oddly enough, this wasn’t my first trip to Port Charles. I had the pleasure of a General Hospital Set Visit a few years back, so I was eager to see how things have changed up a bit.

Our experience started on the set where the magic happens. It always blows my mind how different things look on TV thanks to depth, lighting and extreme close-ups. 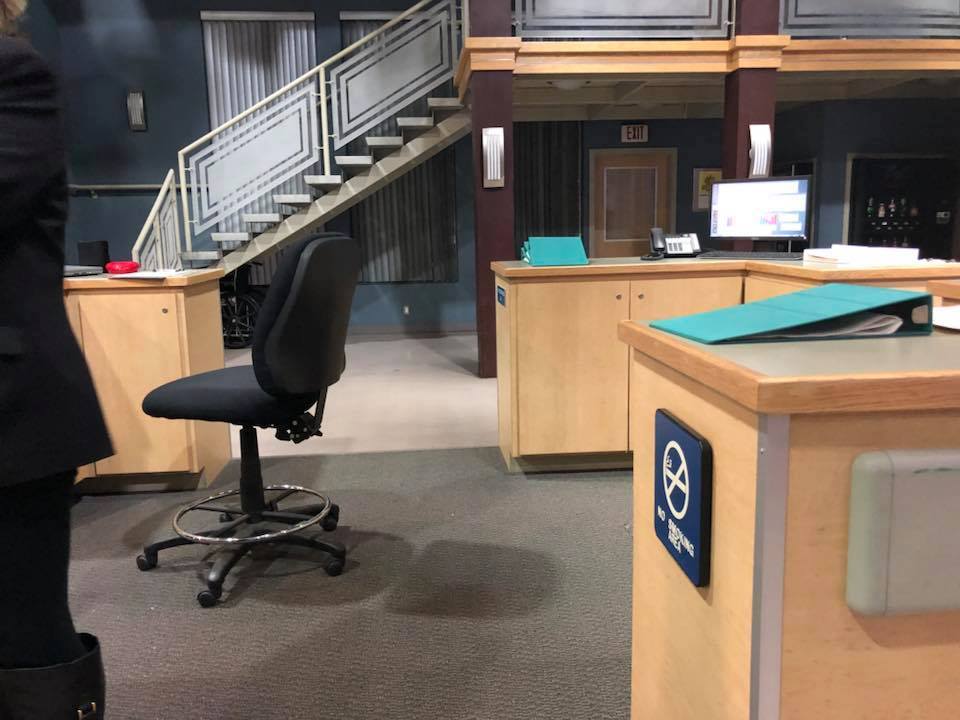 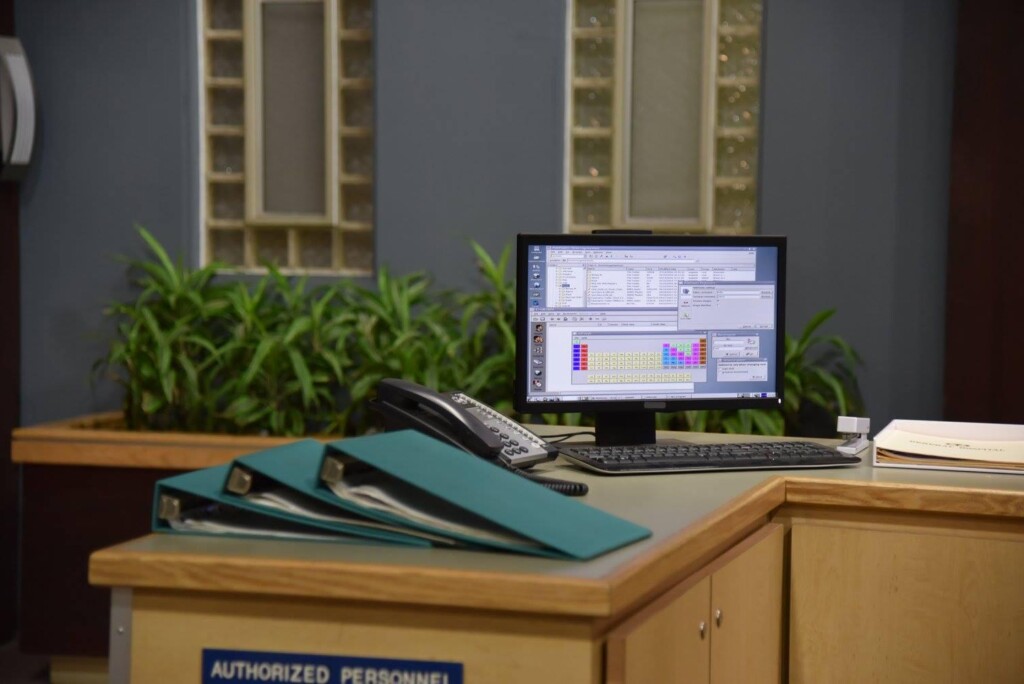 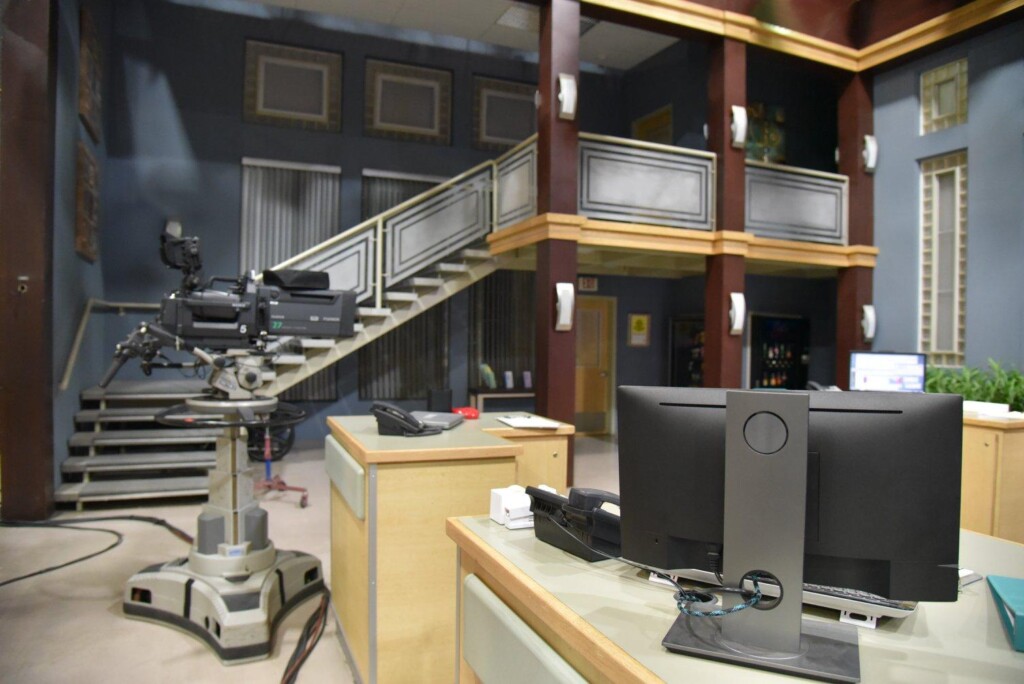 The main hospital hub is used so often that it’s a permanent fixture on the lot. Whereas all of the other rooms and sets get switched around depending upon what they are shooting that day. Through the magic of television, though, you’ll never even realize that there aren’t tons of other floors in this hospital. 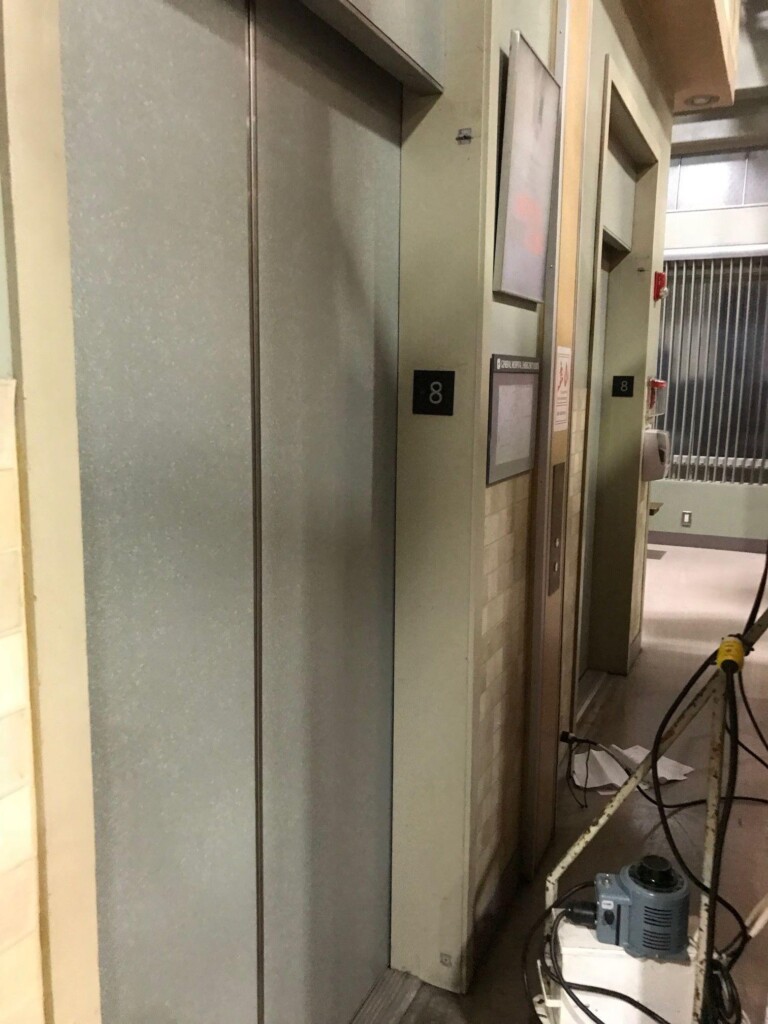 My favorite part of the Hospital Hub was the elevators. These doors don’t actually work. Instead, there are technicians behind them who physically just move the doors to the side when they’re given the right cue. As for the floor numbers by the elevator, well, they’re velcro numbers that can easily be swapped in and out depending upon the number needed. 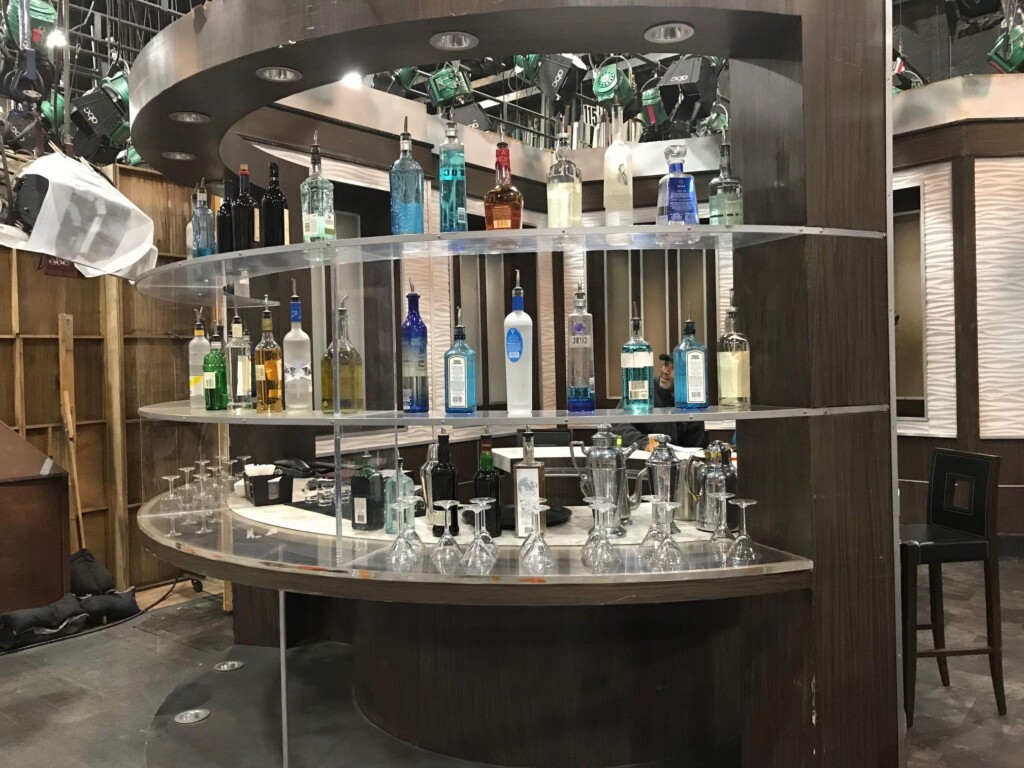 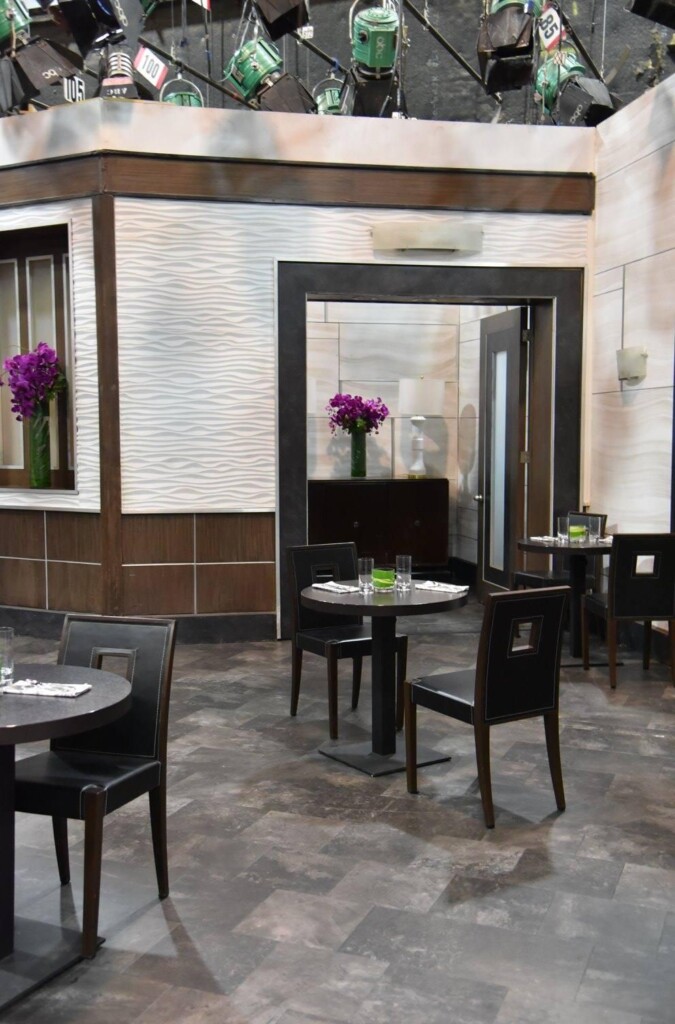 If you’re looking for a fancyish restaurant during your stay in Port Charles, you’d most likely hit the Metro Court Restaurant. As you can see, the set is a bit beat up with scratches on the wood and extremely old liquids in those liquor bottles. The cameramen are certainly pros at hiding things on TV by shooting at just the right angle to make everything look top notch. 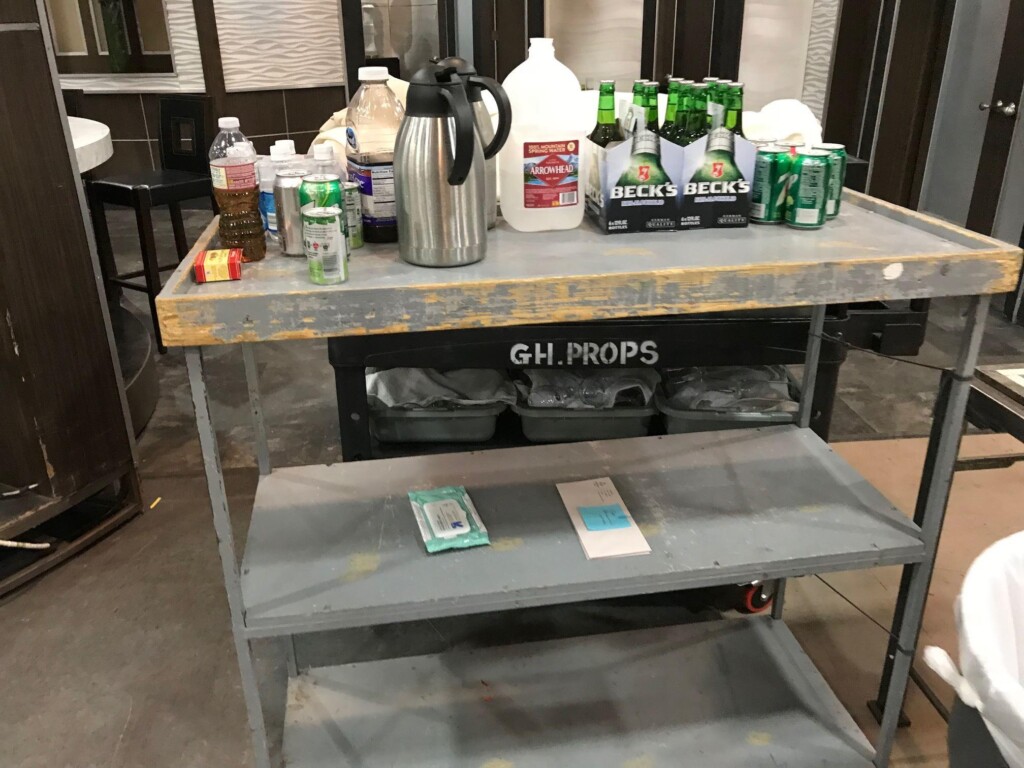 As for those drinks in the bar… you didn’t think the actors were really drinking alcohol did you? Similar looking liquids range from ginger ale to watered down Diet Coke to iced tea, depending upon the actor’s preference. 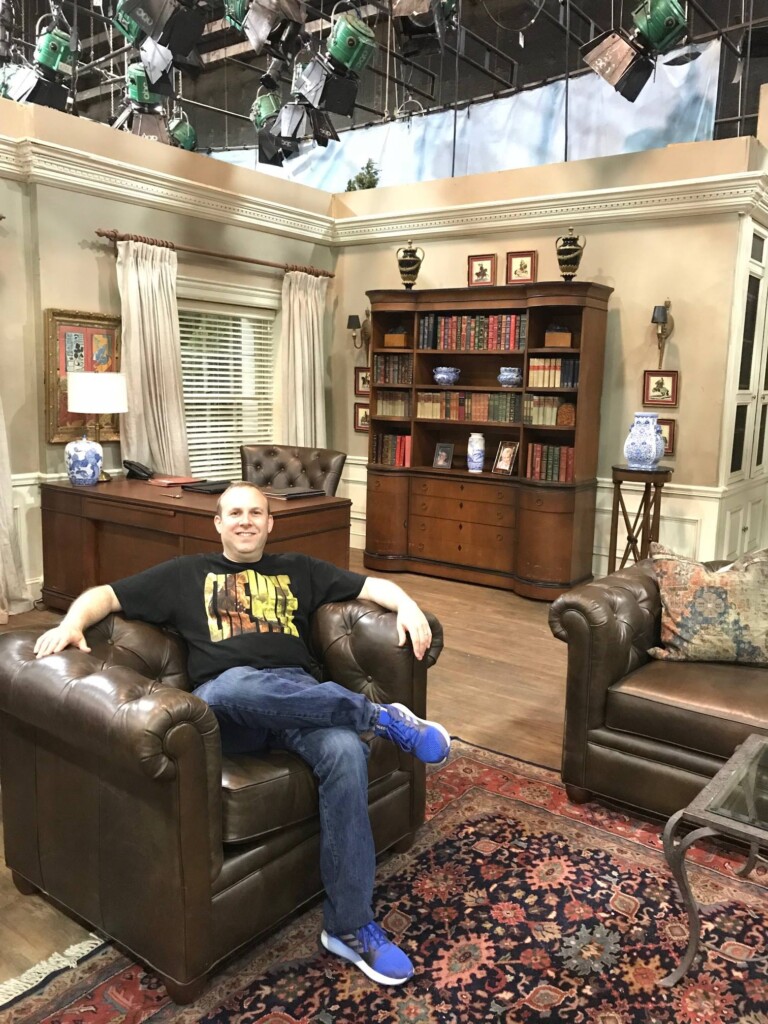 Yeah, that’s me just chillin’ in the Quartermaines’ living room. 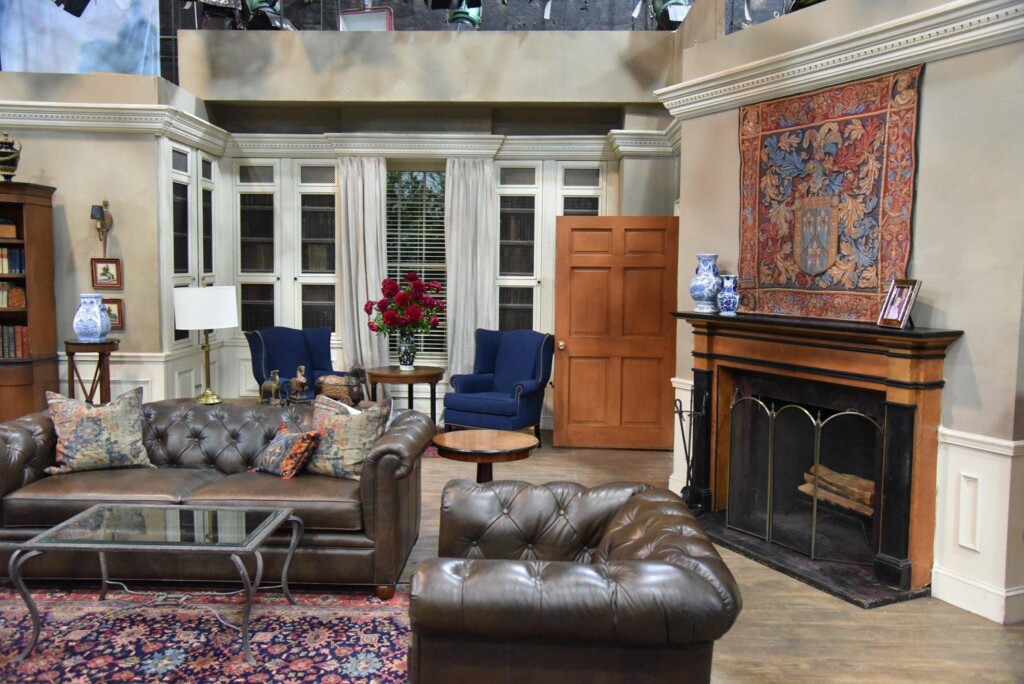 One of the richest families in town, the Quartermaines have two main sets for General Hospital: The bedroom and the more opulent living room, as seen above. The living room set is huge, so whenever possible, scenes may be changed from the foyer to just the den in order to cut down on the amount of the living room set that needs to be pulled out.

The more overall sets that the team can get out at once, the more efficient it is. Pulling out the full Quartermaine living room can cut down on the total number of sets and end up being a lot more expensive. 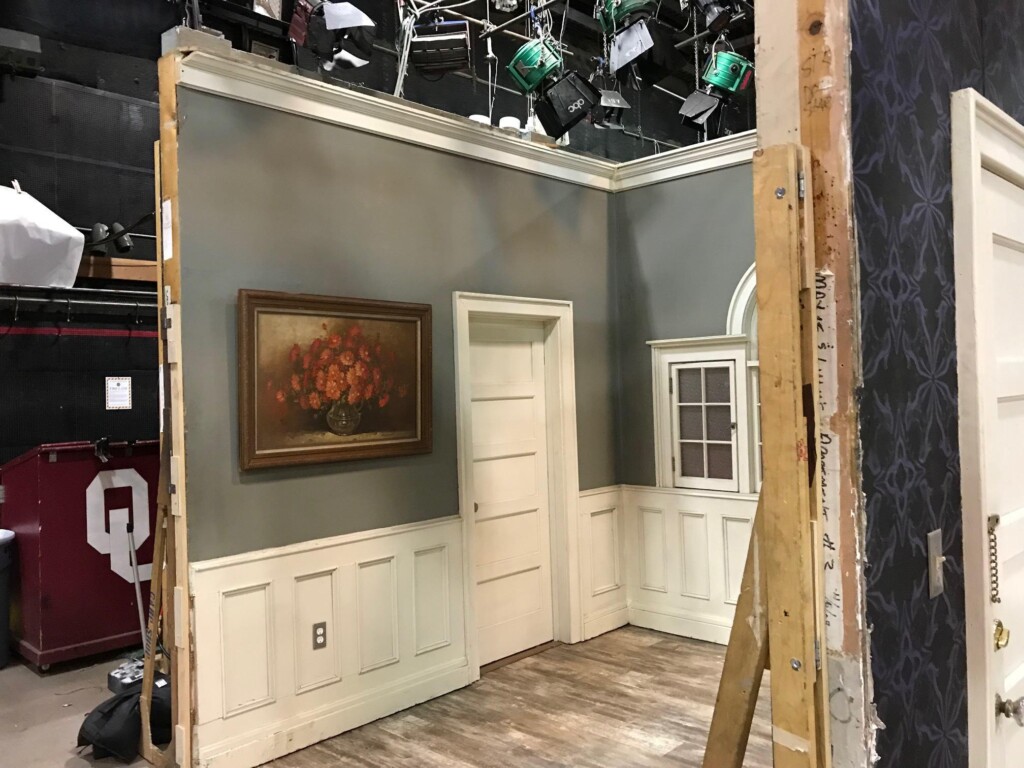 Here’s a quick cutaway of a smaller set just to show you how things are done. They look soooo much bigger on TV am I right? 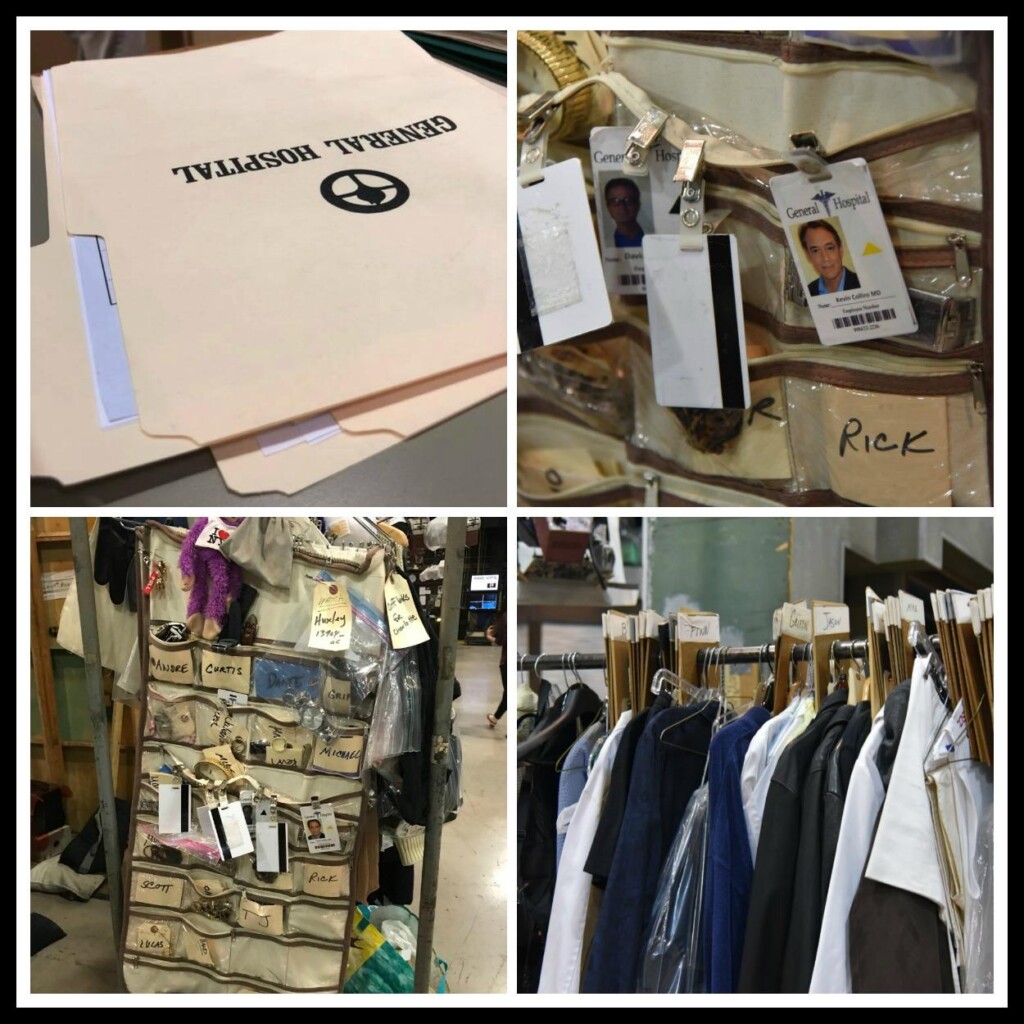 We got to see all kind of fun props from wardrobe to ID tags. But I think my favorite set of all was the courtroom. 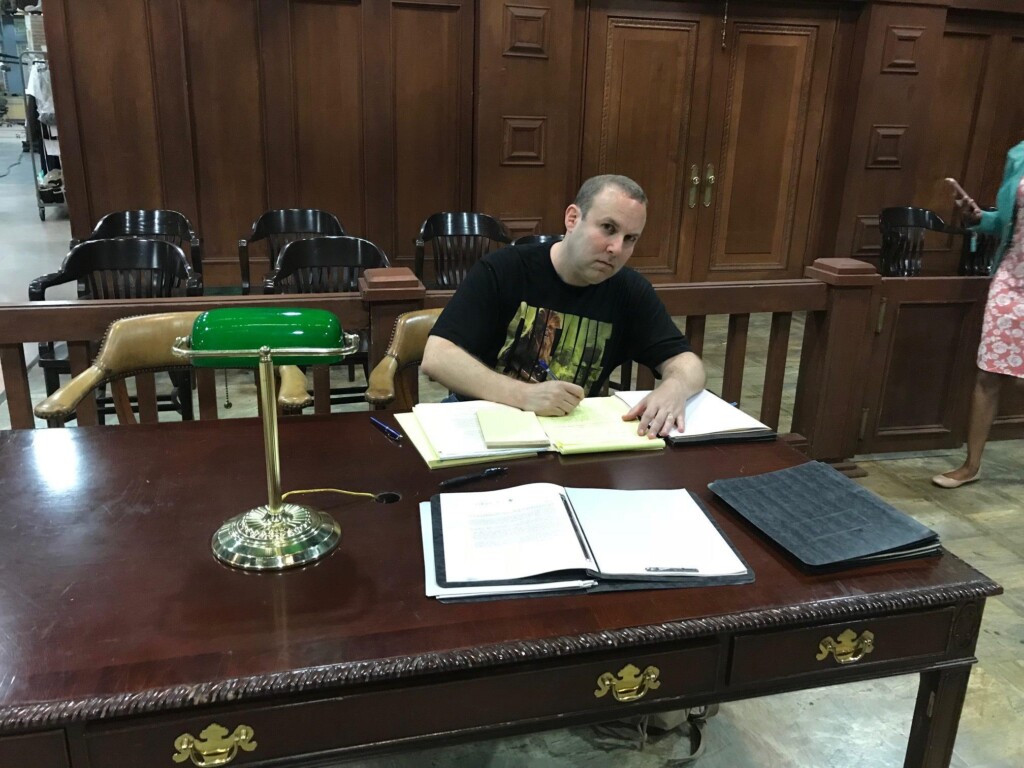 I tested out being a prosecuting attorney. Definitely not for me. 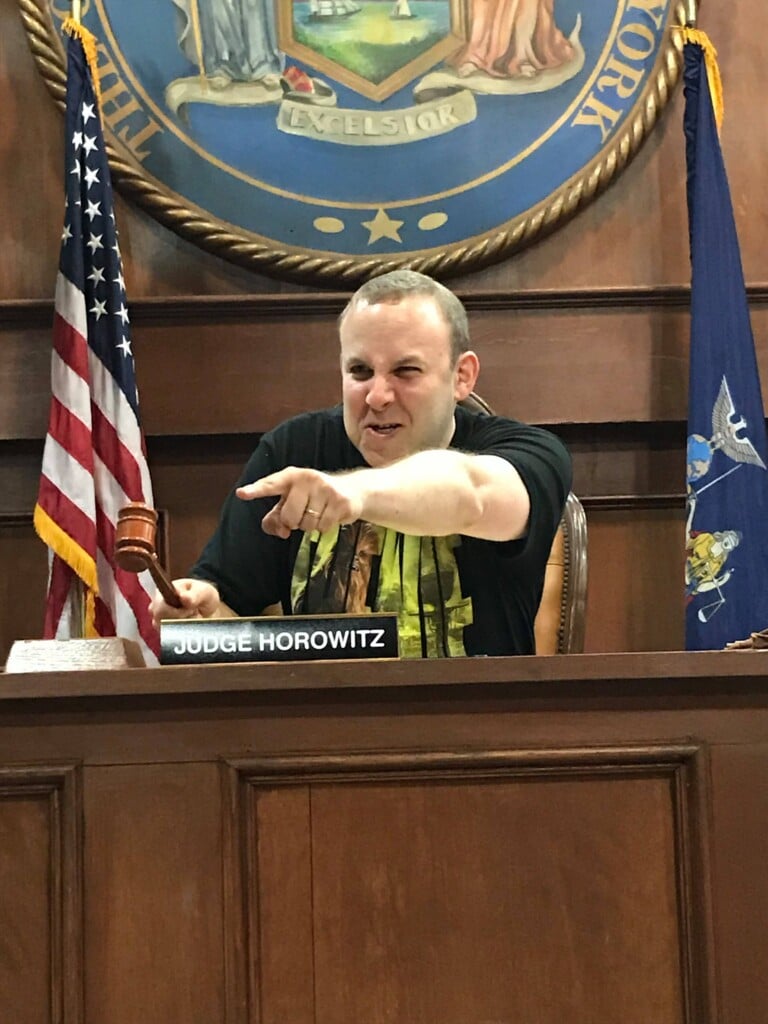 “You can’t handle the truth!” Yeah, I don’t think I’m cut out to be a judge either. 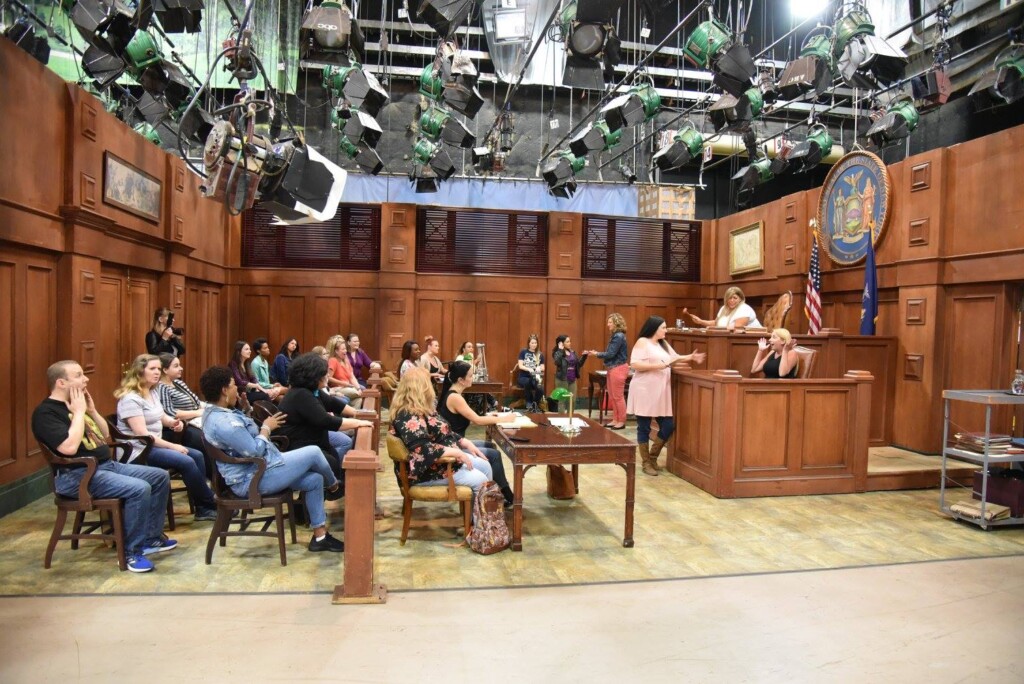 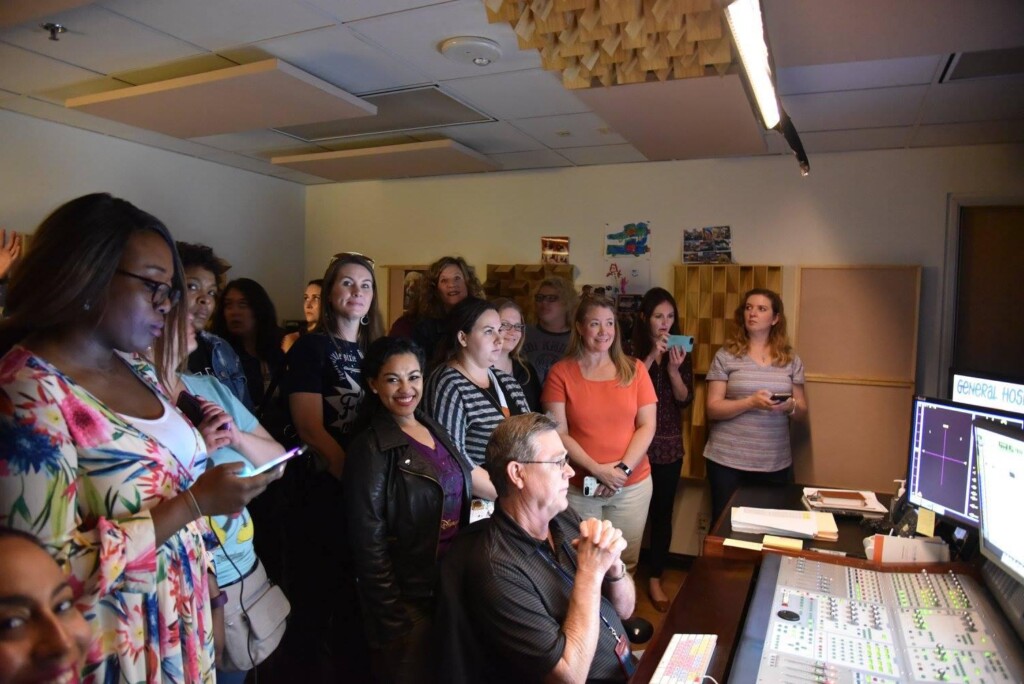 After walking around the sets, we were finally ushered out before anyone broke anything. All 25 of us were stuffed into a control room where we had the privilege of seeing a bit of an upcoming Nurses Ball episode.

On the show, the singing and dancing-filled event began back in 1994 as Port Charles’ most glamorous charity event, all in the name of raising awareness about HIV and AIDS. The week-long Nurses Ball event seems to get more and more elaborate each year, offering some highly entertaining acts.

We were lucky enough to be among the first folks outside of the General Hospital team to actually see one of the musical numbers from this year’s Nurses Ball! It was a real hoot to watch newcomer Joshua Swickard (Detective Harrison Chase) perform.

After watching Josh perform in the Nurses Ball, we all headed over to the green room where we had a chance to chat with Josh and Executive Producer Frank Valentini. Frank explained how the annual Nurses Ball episodes have grown over the years and General Hospital as a show even shares contact information with the audience for research and more assistance in dealing with HIV and AIDS. It’s become much more than an in-show storyline.

So how exactly did a relative newcomer like Josh end up on stage belting out a tune while dancing an entire number?

“I think I was in the middle of a scene on my first or second week,” he said. “And I’m terrified because I’m just new to the show. Frank comes by and says, ‘Hey, do you sing?’ and I was like yeah, and he said, ‘Okay, cool.’ And then I was like, huh? It was one of those moments.”

Clearly Frank was happy he asked, though. “We’re really fortunate we have some really talented singers. And I think Josh just crushed it.”

What’s even more amazing is that true to the fast-paced world of soap operas, even the Nurses Ball dance numbers are only practiced a few times. The first run through, there’s no audience, just loads of different cameras at various locations and heights. Then the actors perform in front of a crowd and finally in front of an audience. The songs are pre-recorded simply because of the complexity involved in the dance numbers themselves.

You can catch the results of all of Frank and Josh’s hard work (as well as the rest of the entire cast and crew) during the Nurses Ball episodes airing the week of May 16-21. If you’re a fan, the actors won’t be the only ones having a ball.