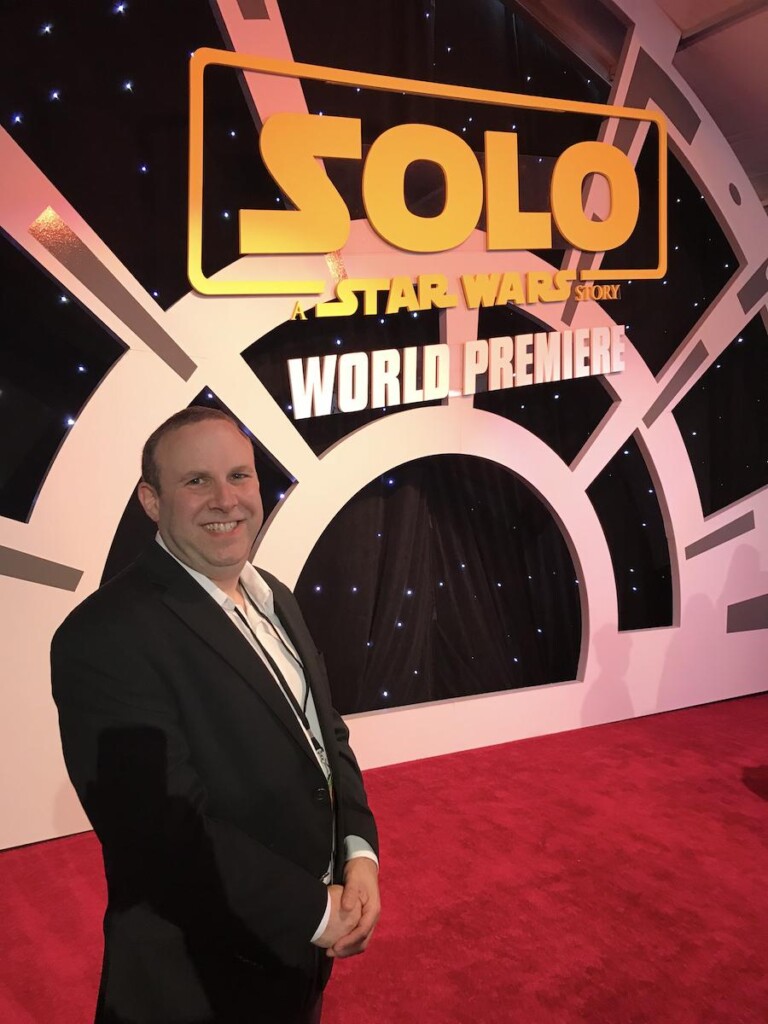 Last week I went solo at Hollywood. Well, technically I was with a group of 24 other bloggers, but we all entered a galaxy far far way (called Los Angeles) for the Red Carpet Premiere of SOLO: A Star Wars Story.

I’ve only been on one other Red Carpet event previously (for Muppets: Most Wanted), so I wasn’t sure what to expect this time around. All I knew was this was the first Star Wars event ever that bloggers were invited to walk the Red Carpet, and that I’d be one of the lucky few to see SOLO before anyone else on the planet.

Oh yeah, and after the movie, we’d all get to rub elbows with the stars at the SOLO After Party.

Curious what a Red Carpet event is all about? No need to put on your fancy dress or best sports coat. Just sit back and follow along as I walk you through my experience.

As much as I would have loved to have worn my Chewbacca costume or even a Star Wars T-shirt, this was the Red Carpet. The same Red Carpet that the stars of the movie (and other well-known celebrities) would be walking down. That means I needed to step things up in the wardrobe department. 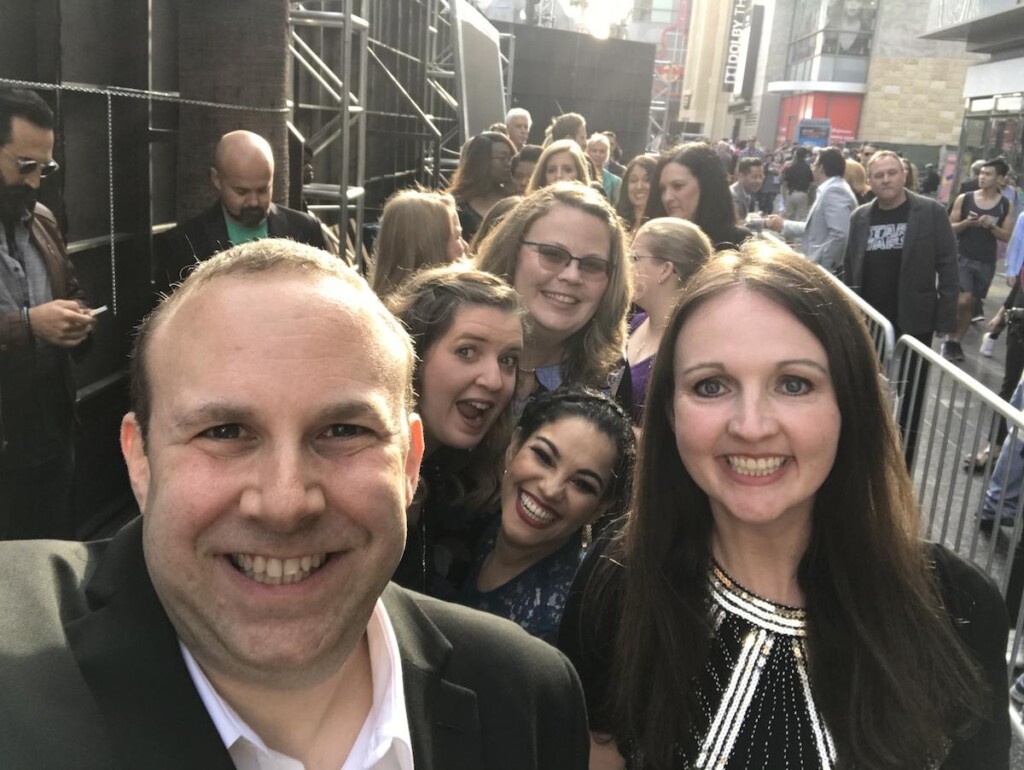 Decked out in my spiffy new blazer, I was all set to join the rest of the bloggers as we headed out to the Dolby Theater for the biggest event this side of the galaxy. We were so(lo) not disappointed! 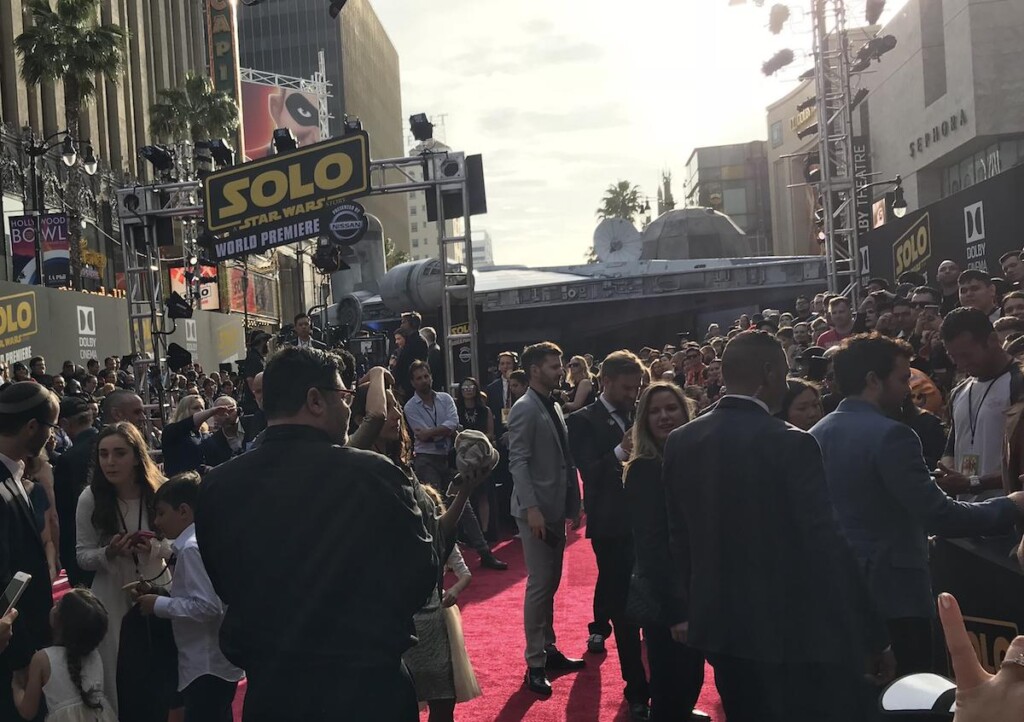 As we lined up to get our credentials, I saw the coolest thing ever: A ginormous replica of the Millennium Falcon. Han Solo’s signature ship was right there in front of me, as part of the background scenery of the event. Totally calm on the outside, the Star Wars Fanboy in me was geeking out to the max on the inside. 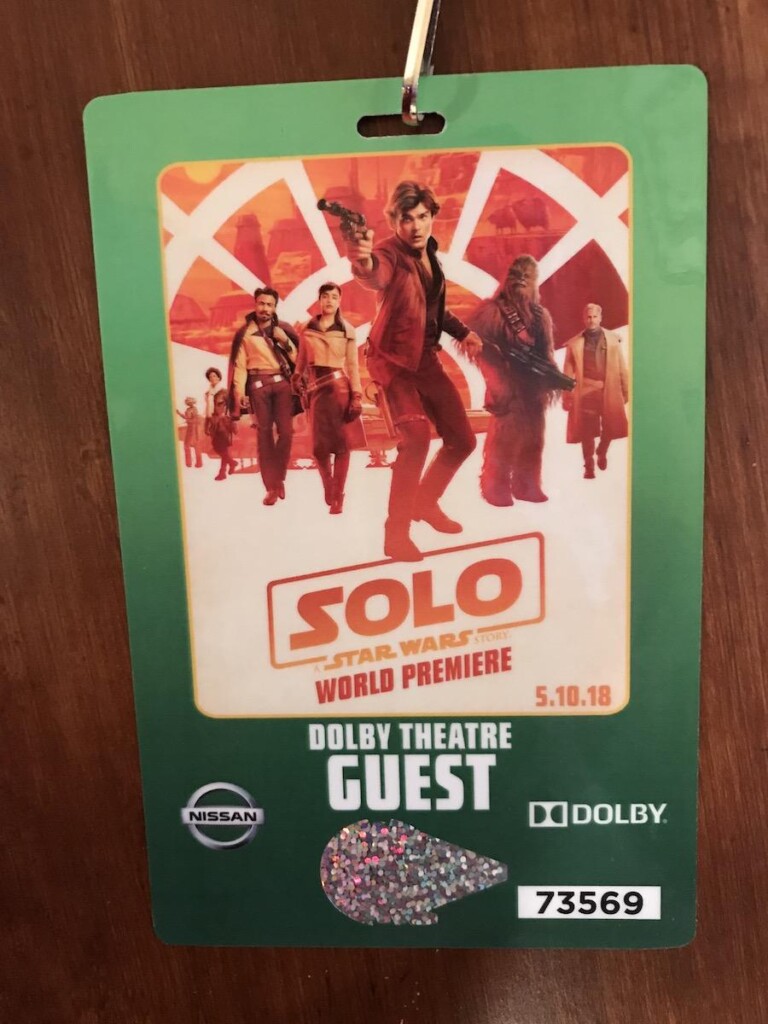 Look, even the credentials to get us onto the Red Carpet made me geek out. There’s a Millennium Falcon hologram! 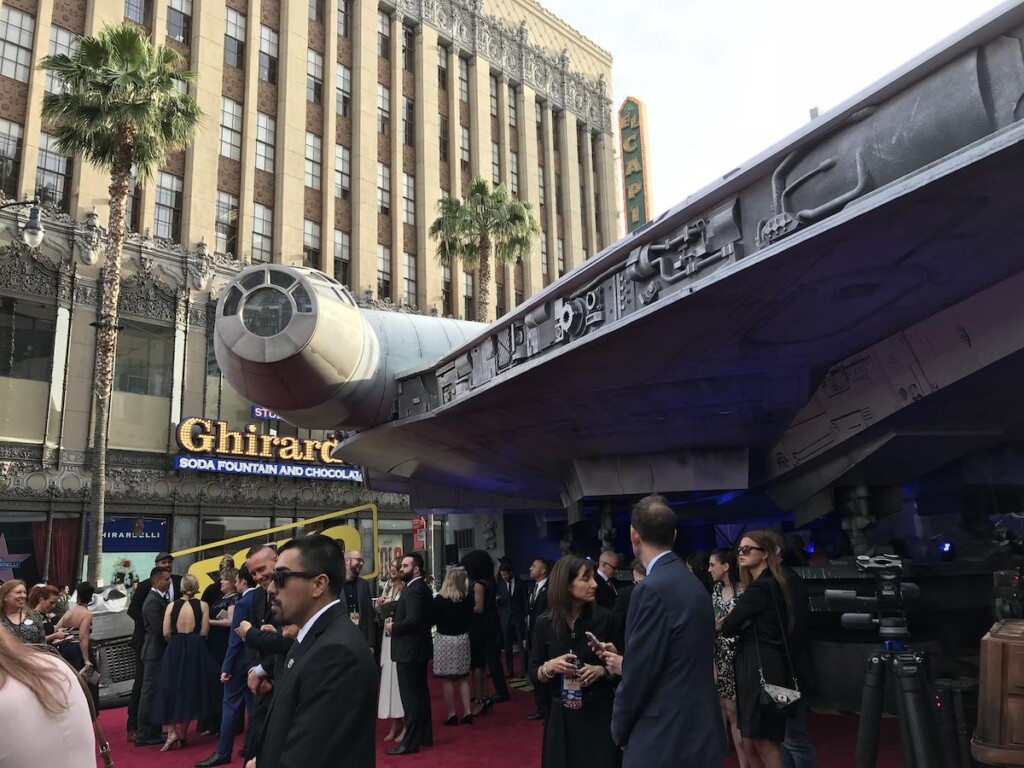 Once we started in to the event, I realized we were walking underneath the Millennium Falcon. As Star Wars music blasted through speakers, all sorts of mist and steam filled the air. We continued to wind our way through the various cargo boxes and trunks piled up beneath the ship, as we followed the Red Carpet down. 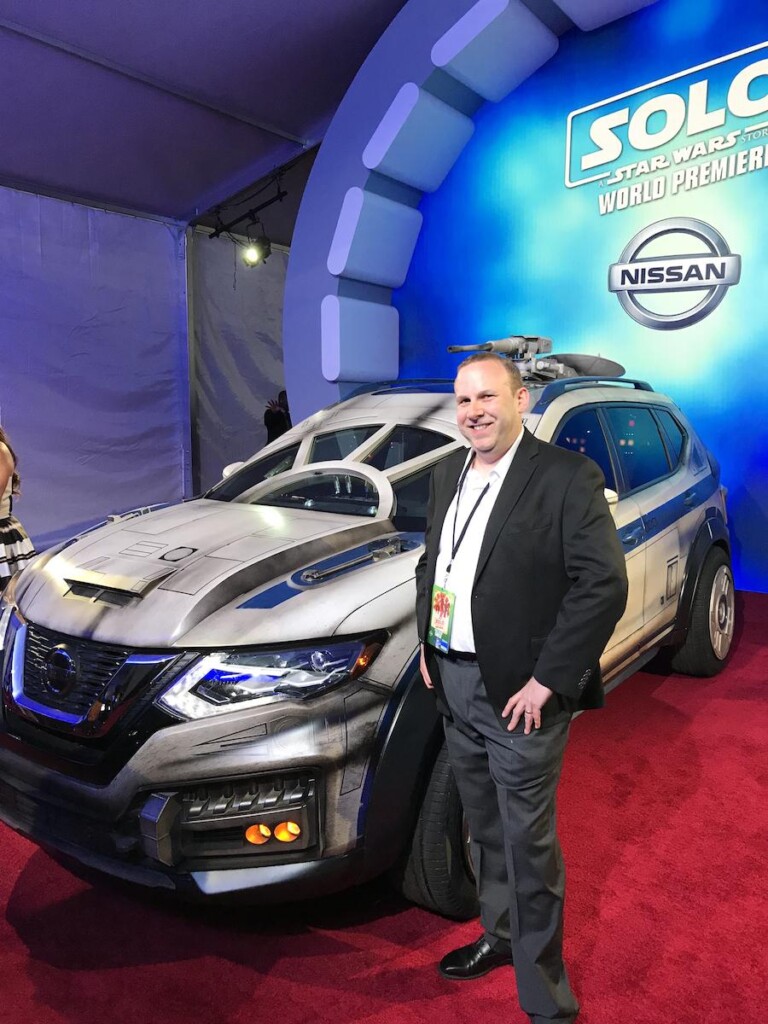 You know it’s a mega event when Nissan has a huge SOLO-themed car on display for the event. I made sure to get a pic of this bad boy. And as I waited for a few of my fellow bloggers to get their pic, that’s when I saw him out of the corner of my eye… 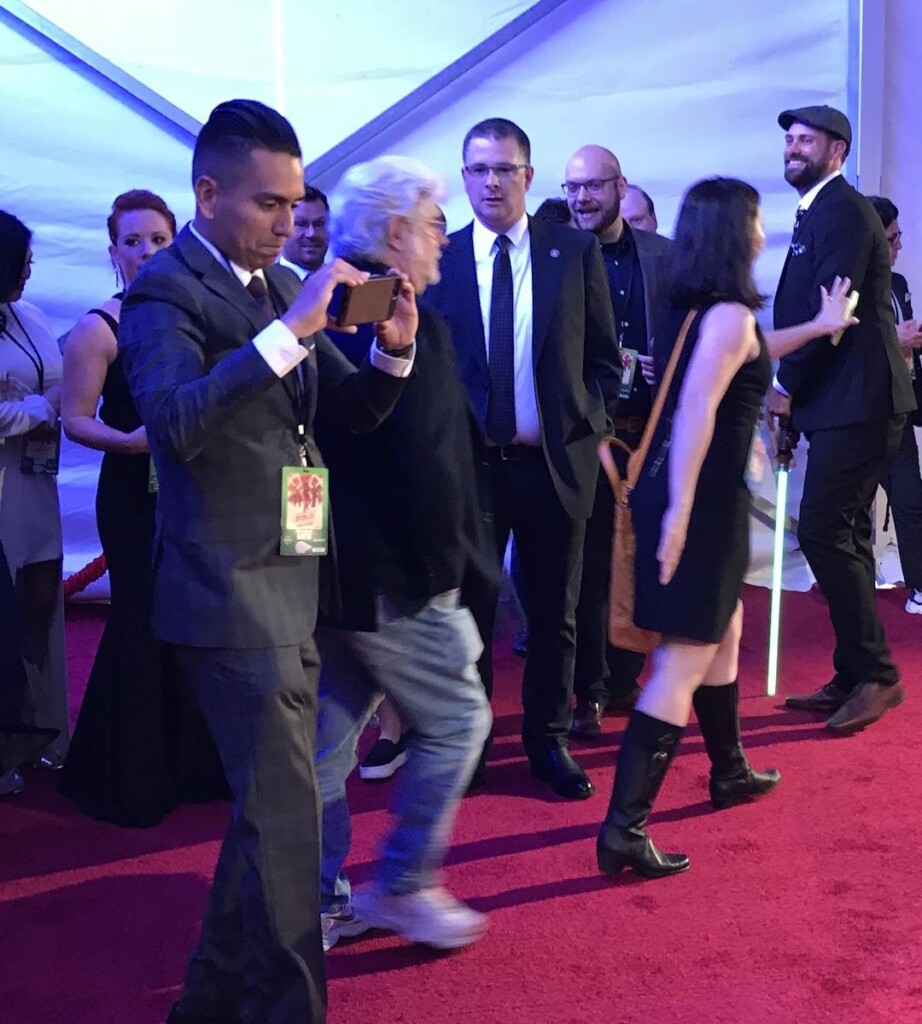 Yes indeed, that is the Father of Star Wars himself, Mr. George Lucas! I was so in shock, I barely got my camera out fast enough to catch him as he walked right on by us. 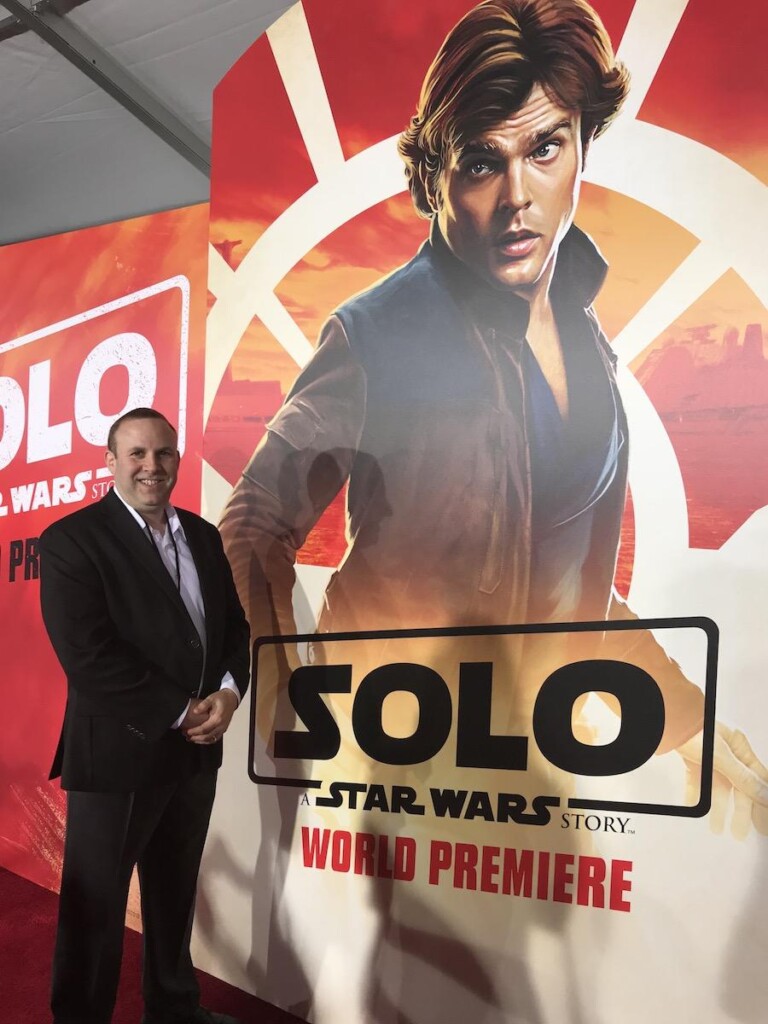 There were tons of opportunities for us to snap a quick photo on the Red Carpet itself, with all the main characters of the movie plastered on the wall. It’s pretty crazy to think that I took an official Red Carpet photo on the same exact carpet (which really was red!) as all the stars of the movie!

Continuing to follow the Red Carpet, we found ourselves at the end of the main walkway where a number of people were milling about. There were also a few opportunities for photos and one of the coolest things I have ever seen. 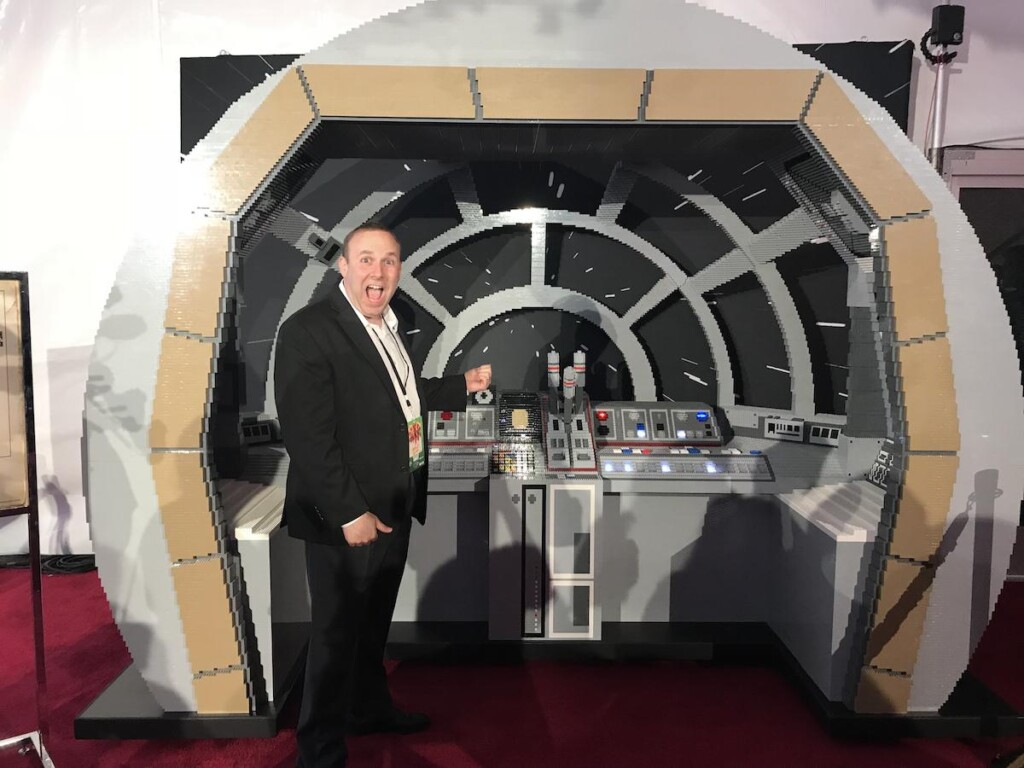 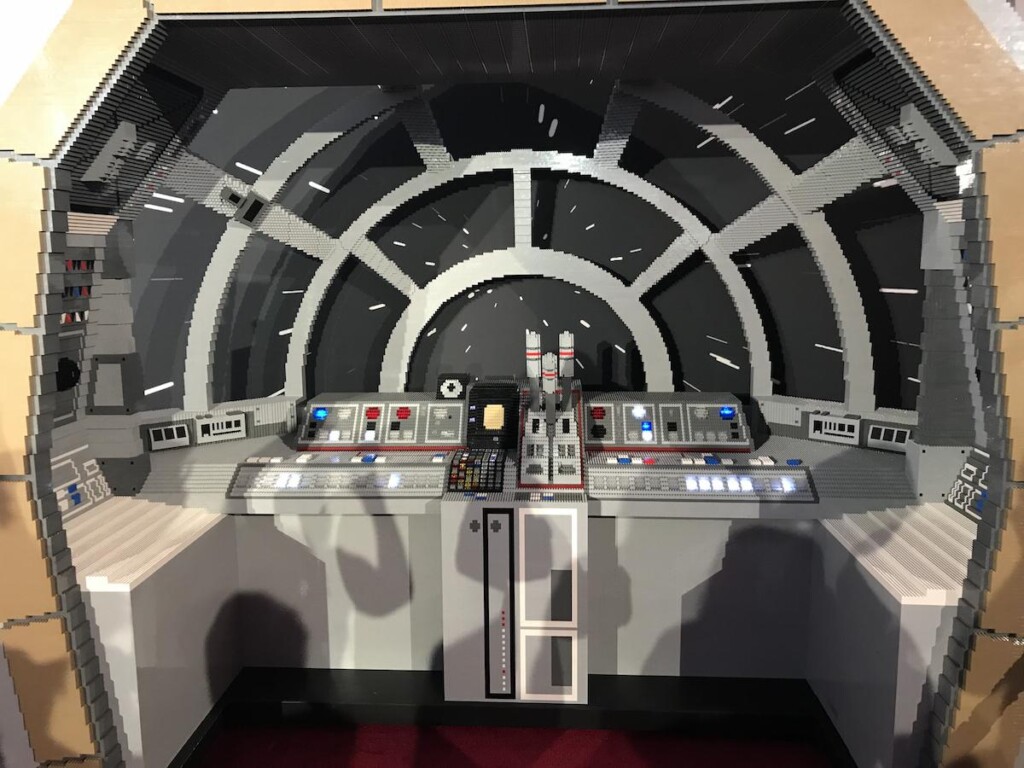 Yes, that is a life-size Millennium Falcon cockpit made entirely of LEGOs. I so want that for my living room but I’m not quite sure how to get my wife to agree to that one.

While talking with a few bloggers, we saw a number of celebrities walk by including Jon Heder (Napoleon Dynamite) and one of my favorite actors Nathan Fillion! I opted to say hello and shake Nathan’s hand rather than take the time for a photo. 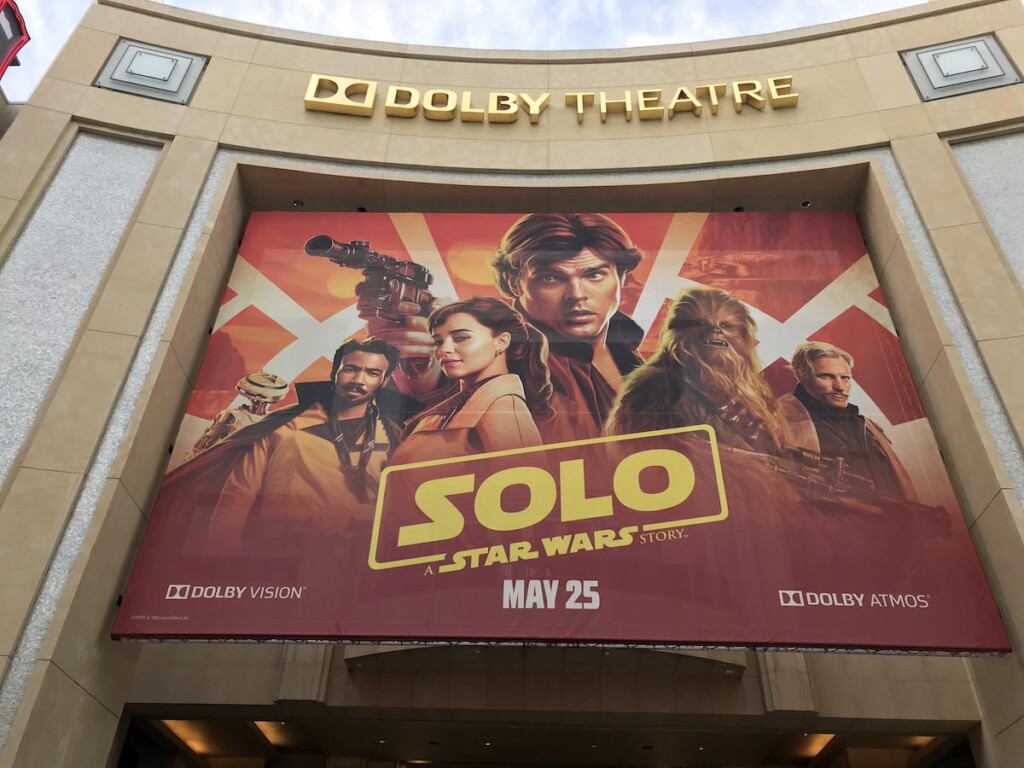 Time was up and everyone was being ushered into the theater. So in we went! Popcorn and water in hand, I proceeded into the gorgeous Dolby theater and our amazing seats, dead center in the orchestra section.

As we waited for the movie to start, the crowd roared into cheers and applause every time a different celebrity entered the theater and took their seats. There was Alden Ehrenreich (Han Solo), Emilia Clarke (Qi’ra), Paul Bettany (Dryden Vos), Woody Harrelson (Tobias Beckett), Joonas Suotamo (Chewbacca) and Director Ron Howard, to name a few. We even spotted Mark Hamill (Luke Skywalker!) about five or six rows behind us.

At one point, George Lucas walked into the theater and the entire audience roared with cheers and applause, some giving him a standing ovation. George proceeded to take a lap around the entire theater, acknowledging his legion of fans. It was pretty surreal to say the least.

Soon the movie started and… well, I’m not saying a word until my official SOLO review is revealed in a few days. I will, however, say that I cannot wait to see it again with my family. 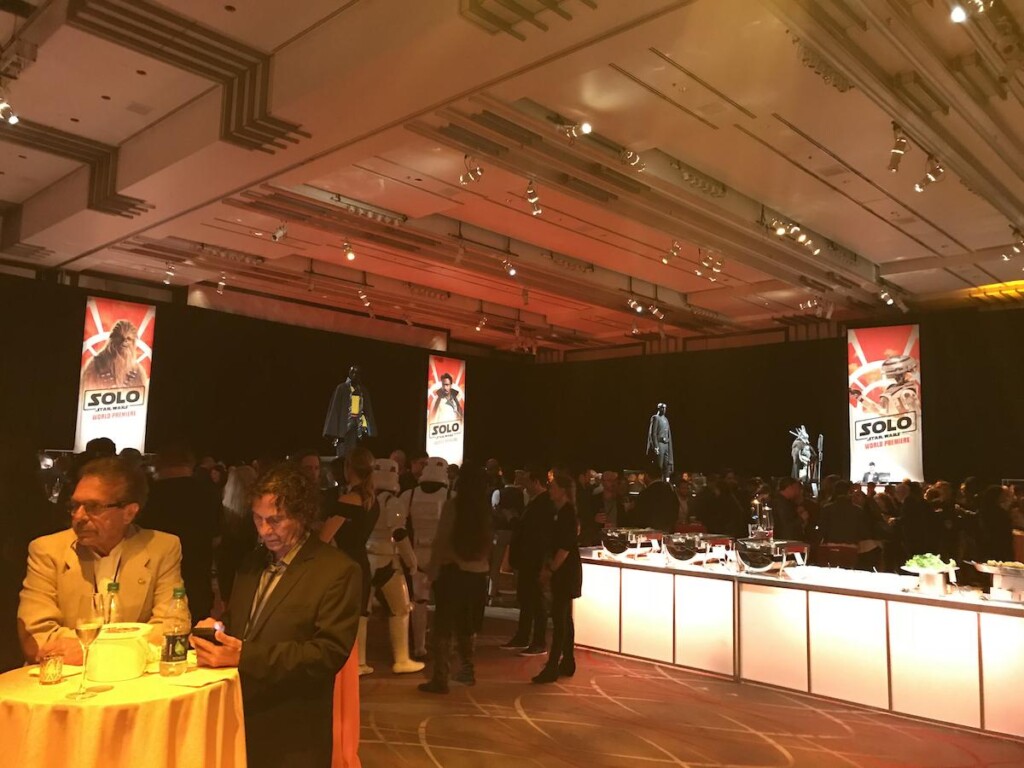 After the movie ended, we all walked over to the mega SOLO after party. It was one huge room packed with food, photo ops, Star Wars props, posters, music  and yes, the stars. 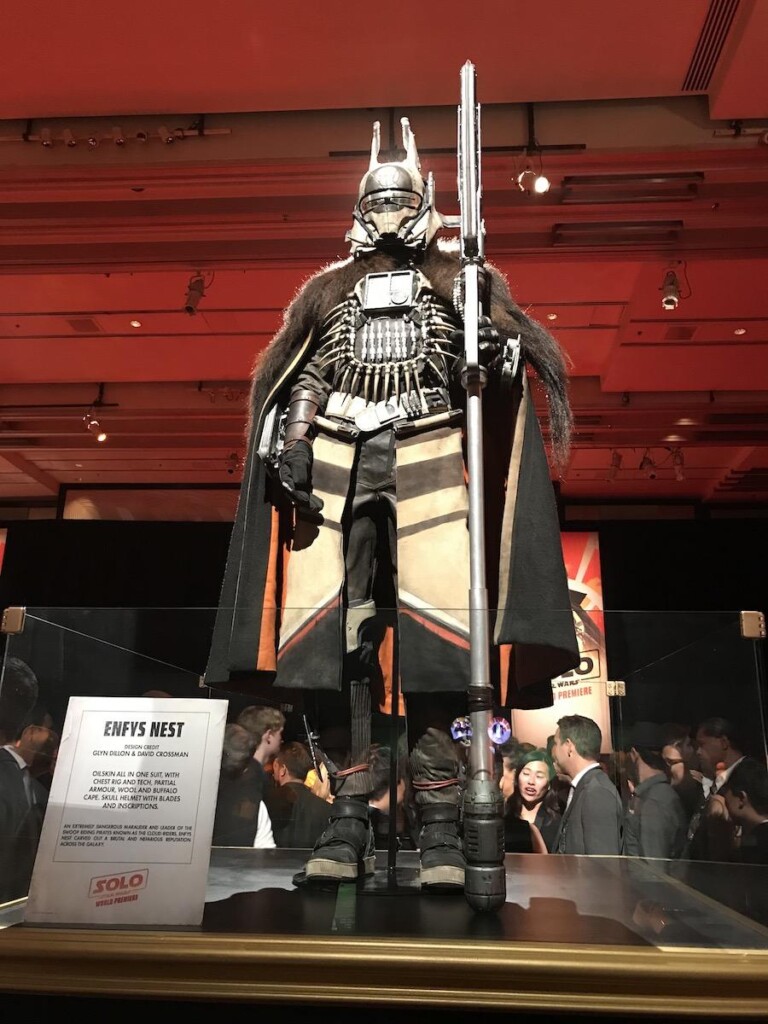 They had a number of costumes, like Enfys Nest above, spread throughout the party room. I love how barbaric this one looks! Such a cool character in the film too. 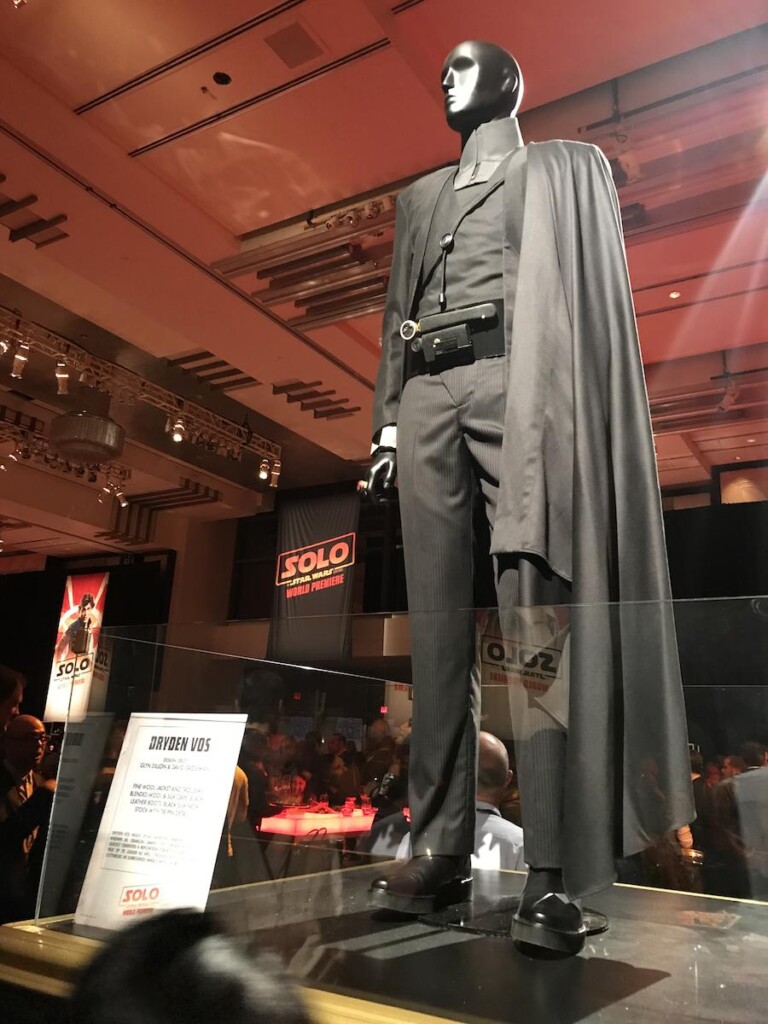 Movie bad guy Dryden Vos’ costume has that familiar black to it but with a bit more of a regal flair to it. 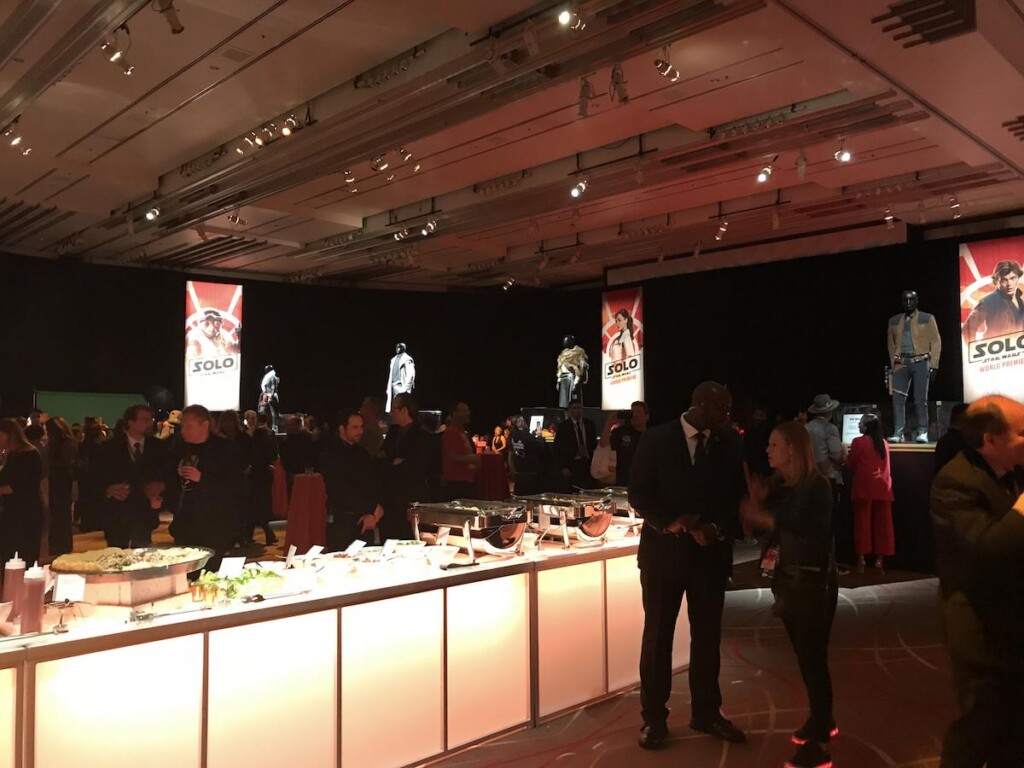 Throughout the room were trays of amazing food including salads, tacos, chicken and waffles, churros and more. Seriously, these were the best chicken tenders I’ve ever had in my life. 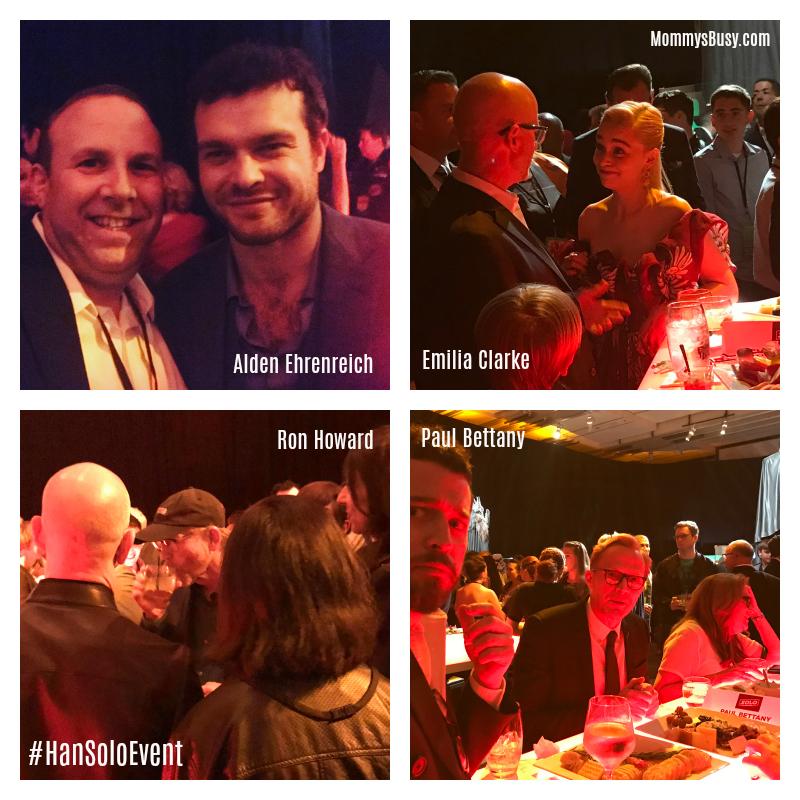 Besides stuffing my face and drooling at all the costumes and props around the room, I joined my fellow bloggers at celeb spotting! Some of them were sitting down at their tables having conversations, while others walked right out into the aisles and chatted away with regular folks like me. Even Han Solo (Alden) took the time for a quick chat and a selfie.

There were also a number of fun photo ops with green screens, as well as a big, lovable Wookiee. The party went on until about midnight, when everyone began filtering out. I had an absolute blast from start to finish and cannot believe I was part of this incredible experience.

Now, I just can’t wait to relive part of it (The movie viewing!) with my whole family.

2 thoughts on “Be My Co-Pilot for the SOLO: A Star Wars Story Red Carpet Experience”