He may play one of the greatest scoundrels of all time, but Alden Ehrenreich is every bit as nice as he is humble. Cast in the role of a young Han Solo, the Los Angeles-born actor had some pretty big shoes to fill for his lead role in SOLO: A Star Wars Story opening May 25, 2018.

As part of a #HanSoloEvent experience, myself and 24 bloggers had the opportunity to sit down with Ehrenreich in Los Angeles and grill him about living up to expectations, flying the Millennium Falcon and working with Game of Thrones star Emilia Clarke. Dressed in a black long-sleeve shirt and dark pants, Ehrenreich casually walked into our room, as we all burst into a round of applause. Immediately a smile filled his face as he sat down thanking us for the warm welcome.

Talking to Ehrenreich you quickly realize why he’s such a perfect cast for a young Solo. He comes across as so genuine an actor that is thankful for this opportunity. He speaks with excitement and a touch of awe at the role he clearly loved playing. But most of all, Ehrenreich comes across as a regular guy. One who enjoys spending a lot of time with his family and truly appreciates the experiences he’s had so far in Hollywood. That includes a shocking face-to-face meeting he literally had five minutes before meeting up with our crew…

How much of your character was Harrison Ford and how much of it was your own?

Alden Ehrenreich: Before I answer that, I just have to sort of excuse myself, because I’m in sort of a daze. I was just doing an interview and Harrison Ford came up behind me and it was just wonderful. I haven’t talked to him since I met with him for lunch before we shot. Something that was really important to me was to make it feel like a real person, that you’re watching a real person going through something.

And you also want to feel a kind of continuity that you could grow into that guy. I basically started by watching all the original movies very early on, and tried to just absorb as much of that as I could, so that when it came time to actually do it, I wouldn’t be thinking a lot about it.

What was that one Han Solo quirk that you made sure you nailed?

Well there’s several things. I don’t want to name them because then it’s like you’re watching for them and I want people to just watch the story. But one of the qualities about him that I really love… there’s a moment in A New Hope where they’re pinned in a corner and they don’t know what to do and he just starts yelling at the top of his lungs and running at [the Stormtroopers]. I feel like that’s a great quintessential thing of the essence of this guy.

You just saw Harrison Ford. Did he tell you his reaction to the movie? 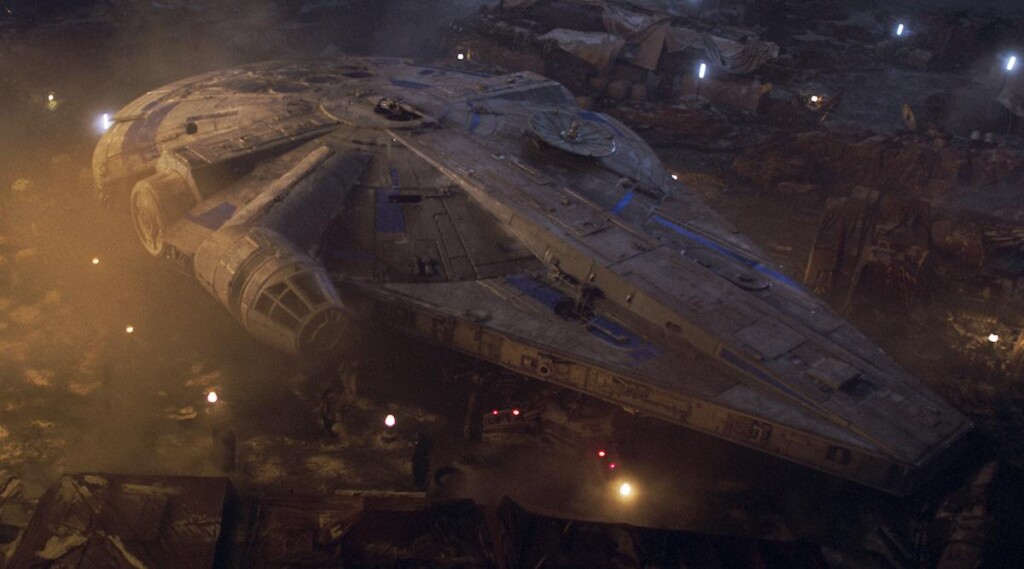 That was really one of the best parts of the whole shoot. Actually flying the ship is so cool. There’s kind of two things that are really cool. One is that you sit down and it’s really fun and you can’t believe you’re there. It’s really surreal. That’s exciting and that’s what everybody comes and visits the set to experience.

After you got the part, what was your first thought and what did you do?

I think it’s kind of like your mind is blown. You’re just in a daze such as I am right now. And you just can’t believe it, it’s so thrilling and so exciting. And after I found out, I’m not allowed to tell anybody. So, you know, I did. [Laughs]

Who did you tell?

My family. All my friends were at work, and I didn’t know what to do. I was like well I should find a way to celebrate this. So I went to the beach and I stood around and I walked around. Then I found myself at the pier and I was like, well I guess I’m here, I should go on a ride. So I just rode a rollercoaster by myself. 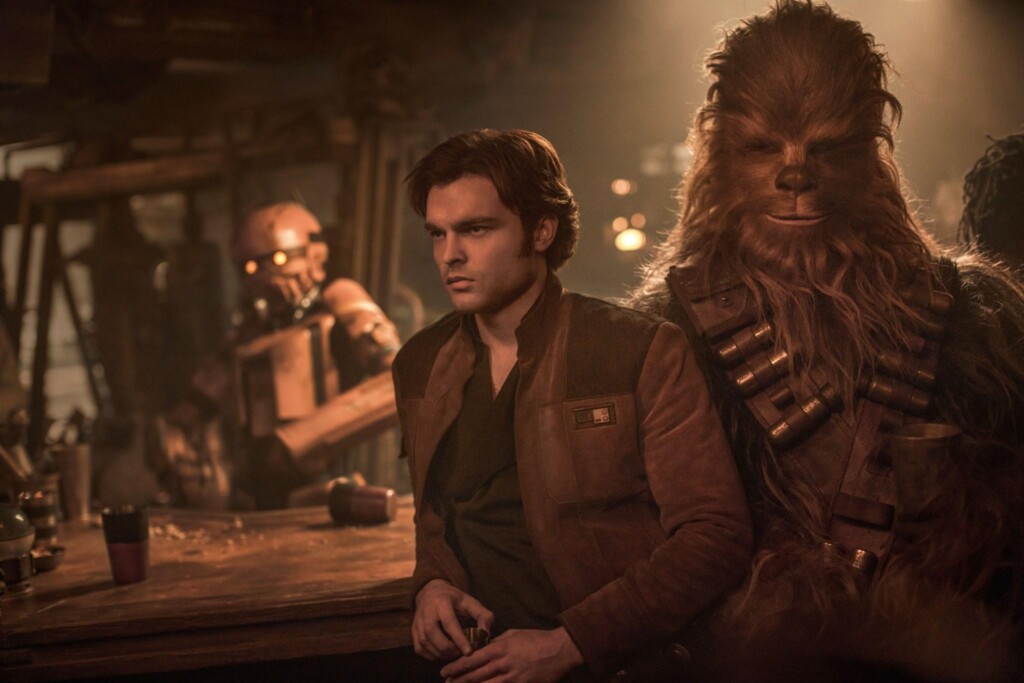 Han and Chewie have such a great camaraderie. Did you and Joonas work a lot on that?

Oh yeah thanks. The main thing with that is that he and I had a lot of time to do training together. The way our characters meet involves a lot of work. We were the only cast members who were there in advance. We ended up just hanging out and doing stunt training and boxing and stuff like that together for a long time, which was really great. And played some video games together at the hotel.

He has like a bed that has like another bed at the end of it that’s horizontal. [Laughs] He’s just the whole package, seven feet tall with blue eyes. He went to film school, he is hilarious. And I don’t think everyone even realizes the amount that Joonas has to do technically. He also has this big heart and exudes that and you really feel it. Some of my favorite work in the film was doing those scenes.

Sure it’s just all my friends and family and everybody. All the kids were making their own little Star Wars movie with pretend lightsabers. And we had some drinks and all sat outside. It was really lovely. It was wonderful.

Working with Emilia Clarke (Qi’ra), were you a big Game of Thrones fan?

So I haven’t seen Game of Thrones. I know, I know. But I’m definitely a fan of hers. She’s really wonderful, incredibly talented, and sweet as could be. I mean, she brought in baked goods for the whole crew like every single Monday. The whole makeup trailer got fresh baked goods every week. And yeah it was so nice. She’s just super sweet and warm.

She was probably the person that I was most on this journey with, in a sense. We spent so much time together and our work was so involved. It was really sweet and I’m very grateful to have that partnership with her.

How did you deal with the pressure of having to play Han Solo?

You try and identify for yourself what you have control over, and just kind of concentrate on your job and your work. I’ve treated the whole experience like a great exercise in learning in a very high stakes how to navigate how much you care about, what weight you give to the opinions and thoughts of other people and how much you try to listen to yourself. It’s a great challenge in a character way and a spiritual way to try to navigate that. That’s been really rewarding.

What is your favorite Star Wars film?

Empire Strikes Back. I love Yoda a lot. And I just think it’s really cool to have this kind of movie with so much real wisdom in it and this deep philosophical background that’s put into terms that are so clear and communicable to so many people. And it’s just cool. Like it’s just cool.

When did you see your first Star Wars movie and how did you like it?

I loved it. I was five and I saw it on VHS. I had all the toys and action figures and pretended. In fact, when I got to do my screen test on the Millennium Falcon, it was so familiar to me from just imagining that I was on it as a kid. It kind of put me at ease. 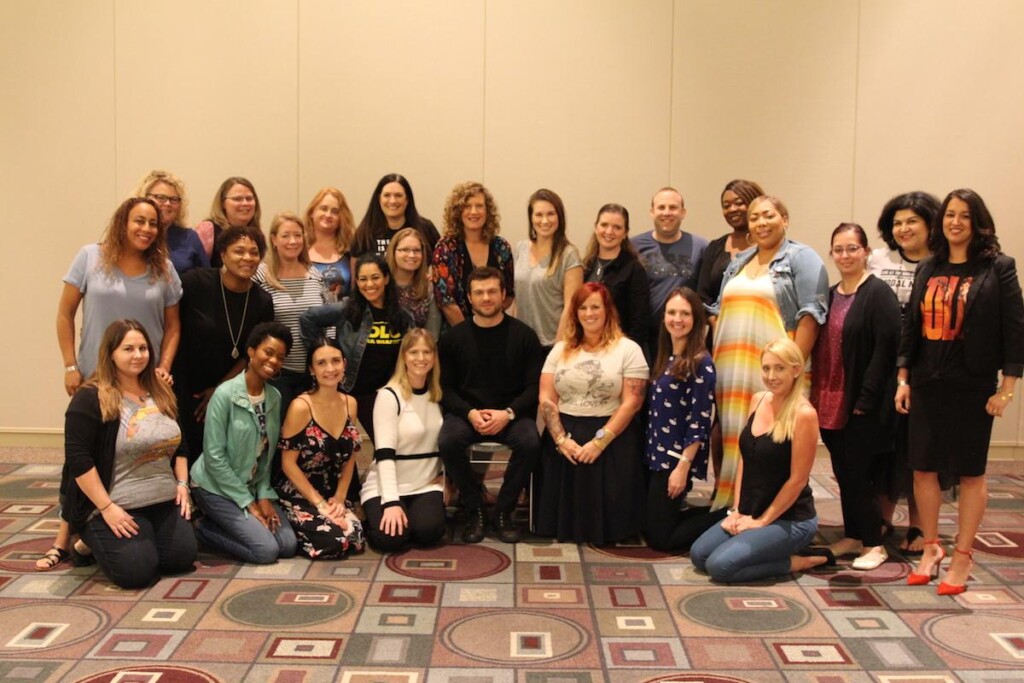