It was Saturday, the day before Mother’s Day and there I was sitting in a room with 24 other bloggers waiting for the Mother of Dragons herself, Emilia Clarke. As part of an amazing Disney blogger event dubbed #HanSoloEvent, the 25 of us had the insane pleasure of attending the SOLO: A Star Wars Story Red Carpet Premiere and interviewing most of the cast members.

Known for her tough female characters, Clarke has been involved with some pretty high profile properties including Game of Thrones, Terminator and now Star Wars. Would the real Emilia Clarke be as tough and foreboding as some of the characters she’s played? Far from it.

As she walked into the room, our blogger group erupted into applause and yeah as a huge GoT and Star Wars fan I may have clapped a “little” louder than the others. Clarke’s reaction? Wide eyed and with a huge smile on her face she simply said, “Oh! Thank you, guys. I’ll come in again!”

Incredibly sweet, the talented actress clearly has a passion for acting and knows that she’s been blessed with some fabulous roles in just a super short time. Before we even dove into questions, though, she was quick to point out that Mother’s Day was just around the corner and remarked, “I hope you guys get everything you need.”

In SOLO: A Star Wars Story, Clarke breathes life into a brand new character, Qi’ra, the love of young Han Solo’s life. Yes, indeed. Apparently there was a woman in the rouge’s life before Princess Leia entered the picture. Eager to learn more about this new character and her overall experience in the Star Wars Universe, we started grilling Clarke on everything from her brother’s fandom to yes, even the Marvel Universe.

So when did you become a Star Wars fan?

Emilia Clarke: I wasn’t around when it first came out.  I wasn’t born then, but my brother was a huge fan. So when I was little we would dress up as Star Wars characters for Halloween. I didn’t know what was going on.

But when Episode VII came out and I went to go and watch that with him I became a fan because I suddenly realized what everyone must have felt in 1977 when it first came out.  The enormity of it all. Like this is how a movie should be made. This is what they should look like, this is a blockbuster.  As soon as that happened, I was like, ‘I need to be a part of this.  This is how it’s done. This is how everybody should make a movie.’ From then on, I just watched everything and then now I’m here.

Are there similarities between your character Qi’ra and yourself?

Well goodness, I think that Qi’ra is definitely a survivor. She does what she needs to do to keep being around.  I think it’s fun because what you get to see with her is you see her and Han from the very beginning. You see a youthful look where they both came from, when nothing was too serious.  They were just surviving and Bonnie and Clyde-ing their way. They get separated and you see her later on in life. She’s lived a huge amount in the short time that we don’t see her.

And I had to grow up really quickly. Game of Thrones was my first job and then you know…  it was literal Baptism by Fire. You just gotta’ hustle, you gotta’ up grow up real quick.  So I think there was a bit of that that I got, but not to the level of her at all.

Were you intimated at playing the woman who came before Princess Leia?

Well, I just tried not to think about it.  I’m not going to lie. [Laughs]  It’s scary enough standing under the Star Wars banner, but having that as well. I was like this takes place before her so I don’t need to spend too much time worrying about it. I don’t know what my next 10 years are going to look like, so  I can kind of step away from that. I’ll let Alden [Ehrenreich, Han Solo) take all that heat. [Laughs]

You play such strong women characters. How do you want young girls to look up to you?

I get ‘you play a lot of strong women’ questions a lot and what I would love is to say that we’re just women.  You can take strong out of the equation, do you know what I mean? It just is what we are; strength is within us as women.  It’d be wonderful if the young girls who are watching me play these characters now just see that as a part of being a woman. As opposed to it being a choice of like, ‘Oh I’m going to be a strong woman or I’m not going to be a strong woman.’  You are, we all are. You have it in you anyway, so just go get it.

You’ve done Broadway, TV and films. Which do you prefer?

I think it’s really important to do both stage and screen as an actor because when you do the stage it’s like going back to Drama School. You kind of relearn everything. My dad was in the theater. He was a Sound Designer, so I grew up being able to go backstage. It’s magic in the theater and it’s magic being part of an ensemble that is unlike anything you could ever get when you’re filming on screen.

On film, you’re in your trailer doing your thing. Whereas in the theater every single night you’re with your squad. You’re with your ensemble and you’re working together to make something different every night and to me it feels like actual magic. It’s the most beautiful thing ever, but it’s really exhausting and it sure don’t pay the rent. [Laughs] So you have to mix that up. If you have the ability to, I think it’s important to keep going back and checking in with your craft.

Can you tell us about the costumes and what it was like for you because you went from a poor character to a lucky character?

Yeah it was really funny because in the beginning we were kids on the run. There was this sort of cool factor that you can kind of play into.  I remember when I first put on the younger outfit I was like, ‘Yes! This is good.’ I’m going to go ahead in this.’

And then later on it needed to have an impact. When we see Qi’ra later on, she’s kind of owned. There’s a little kind of property about her. So I wanted to give the impression that later on she had clothes that were bought for her to appear a certain way and I think that plays into Qi’ra’s character in terms of what she chooses to show and what she doesn’t. I think that was reflected in the costume definitely.

What was your brother’s reaction that you’re now part a of the Star Wars legacy?

I think he maybe screamed louder than me. [Laughs] It’s really impressive, yeah.

What was it like to be directed by Ron Howard?

I mean amazing.  It was just a dream come true.  He literally couldn’t have been better and just held us all in the most beautiful way. He made us all feel heard, which in a movie of this scale is so impressive.

How do Star Wars fans compare to Game of Thrones fans? They’re both pretty hard core.

I know, but I sort of feel like there is cross over. And I’ve not has as much experience with Star Wars fans because [SOLO] hasn’t come out yet.  My Game of Thrones fans are incredible and loyal and wonderful, but I do think that a lot of them will also love Star Wars.

If you were to join the Marvel Universe what character would you be?

Oh my God, you don’t know.  I actually don’t. I want to say The Hulk. [Laughs] I don’t know, he seems like he’s having the most fun like out of everyone. 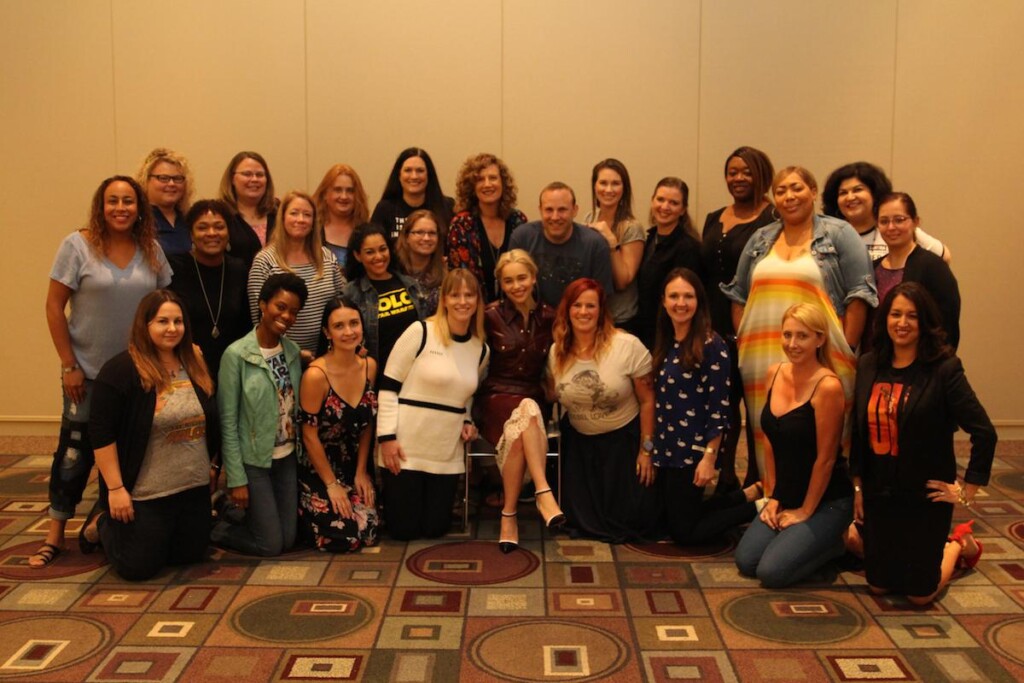