I was one of the lucky attendees for the Planes Premiere at El Capitan theater in Hollywood, California and, to be honest, I wasn’t quite sure what to expect. I hadn’t seen CARS in the theater because my youngest was too young and my oldest was too old. Later, we watched it at home and, while I did enjoy it, I think I missed some of the impact that the big screen provides. Luckily, I was able to view PLANES in all of its larger than life 3D glory. 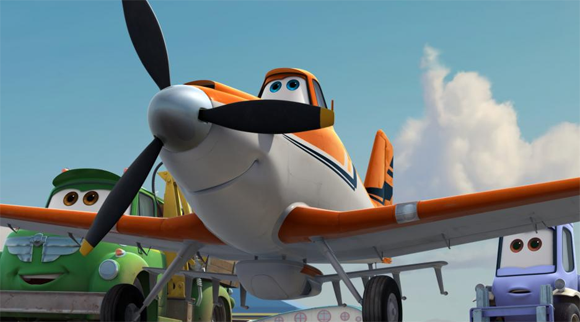 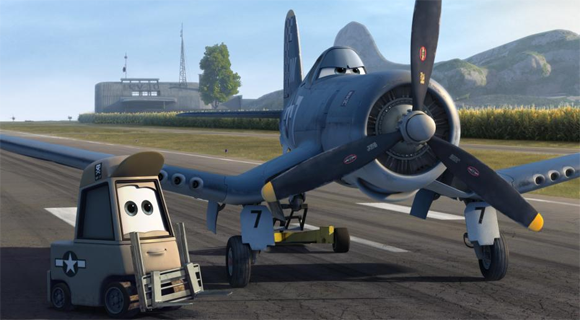 “Disney’s Planes” is an action-packed 3D animated comedy adventure featuring Dusty (Dane Cook), a plane with dreams of competing as a high-flying air racer. But Dusty’s not exactly built for racing—and he happens to be afraid of heights. So he turns to a seasoned naval aviator, Skipper (Stacy Keach), who helps Dusty qualify to take on the defending champ of the race circuit. Dusty’s courage is put to the ultimate test as he aims to reach heights he never dreamed possible, giving a spellbound world the inspiration to soar.

Dusty is joined by a host of characters that will make you laugh, cheer and sneer. Chug the tow truck (Brad Garrett) and Dottie the cute little pushback (Teri Hatcher) form the front line of support as Dusty revs up to take on the fastest planes in the sky: Rochelle (Julia Louis-Dreyfus), Bulldog (John Cleese), El Chupacabra (Carlos Alazraqui) and Ishani (Priyanka Chopra). They all have high hopes of beating the ruthless reigning champion Ripslinger (Roger Craig Smith) and his crew Ned and Zed (Gabriel Iglesias). 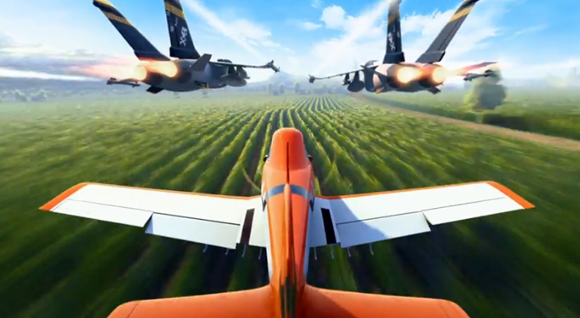 3D Is The Way To Go This Time

It seems like every movie is 3D lately. I admit, I’m one of the movie goers who typically foregoes the enhanced, in-your-face version. PLANES broke me of that habit. Unlike other 3D films I’ve seen where the goal is to be all up in your eyeballs as much as possible with things popping, shooting and basically making you duck and cover (and drop your popcorn) – PLANES uses the film method to create a realistic three dimensional world. While there are occasions of pleasantly surprising movement like a spray of water when it meets a plane’s tail or the swirling of clouds disrupted mid-flight, the main focus is building up an animated world you feel like you can reach out and touch. From the mountains to the ocean waves to the wheat rushing underneath, the landscape comes to life right before your eyes. 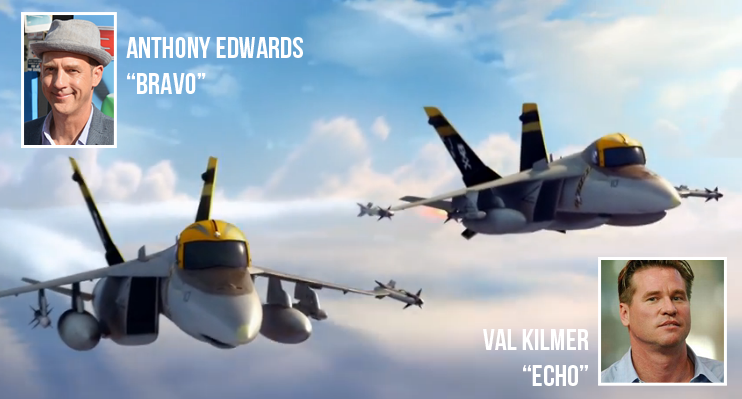 Flight film fans will definitely take note of the nod given to the legacy of Top Gun – seen in the characters Bravo and Echo. These two fighter jet members of the ‘Jolly Wrenches’ are voiced by none other than Anthony Edwards (Top Gun’s ‘Goose’) and Val Kilmer (Top Gun’s “Ice Man’).

Though all of the characters have their own charisma – there is one friendly fellow that steals the show: El Chupacabra. 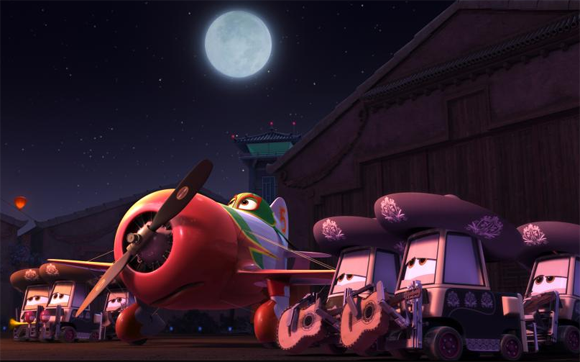 An indoor flying legend from Mexico (along with a telenovela actor and romance novelist), El Chupacabra is a caped charmer who loves the ladies almost as much as he loves to fly. With an engine almost as big as his ego – I was instantly taken with him. El Chu brings the laughs and the love.

Disney, once again, stays true to bringing families entertainment that can be enjoyed at any age. There is silly slapstick humor for the smallest of children and witty banter that will also entertain the adults. There are a few mild words (such as ‘sucker’ and ‘loser’) that, while not profanity, could still trouble some parents if their child(ren) begin repeating it.

One scene contains – for lack of a better term – machine death. A flashback to wartime battle shows planes talking and joking, then the same characters are shot down, burned out etc. While the scene itself is not overtly violent, smaller children may not understand exactly what happened to the planes without some parental explanation. And, while there is romance and obvious sparks of attraction between characters, the flirtation is never crass or adult in nature.

PLANES also affords parents a creative opportunity to discuss trust, honesty and ‘doing the right thing’ while also exposing them to different cultures and countries as the race takes viewers around the world.

Bad Press? Say it isn’t so.

While many reviews seem to be unmerciful with their opinions of this non-Pixar sequel, I think there is still plenty of room for parents to enjoy this film with their children. While it’s not typical fare for a date night or hanging out with the guys – I know my children would still easily find the humor and appeal of these characters. I have a feeling yours will too.

Written by Kenda Smith, attending on behalf of MommysBusy.com – read more from Kenda at RemakingJuneCleaver.com