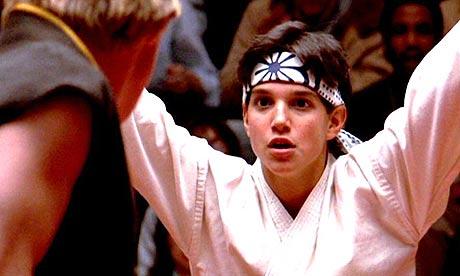 Last night was Family Movie Night in our house. I offered the boys a choice of either The Last Airbender or the original 1980’s classic The Karate Kid. Let’s just say… they chose wisely.

I wasn’t sure if they’d be bored for most of the movie or not, since the actual awesome training and karate stuff doesn’t happen until about halfway through the film. But from the moment it started, they were pretty much glued to the screen. Ryan asked his usual six and a half million questions (Is that the bad guy? Is that where they train? Does the karate master fight the other guy? What’s happening now?), but definitely managed to stay focused on Daniel-san for most of the time.

Ryan’s biggest question throughout, though, was, “Does he have a girlfriend? Do they kiss? On the lips?!?” When I finally answered an affirmative, his reply was pretty textbook: “Eww. That’s gross.”

I loved the Karate Kid when I was a kid and probably haven’t seen this film in geez, well over 20 years by now. I was afraid it’d come across super dated. And yeah, the looks, jokes, and even music certainly scream ’80s, but that doesn’t mean the film doesn’t hold up today. I completely enjoyed it again, as did my wife and kids. Pat Morita is just perfect as the simple and shrew Mr. Miyagi, and Ralph Macchio plays a typical awkward kid perfectly. His interactions with Elisabeh Shue are pretty priceless.

The fight scenes are great, though shorter than I recall. The super-awesome, tell-me-you-didn’t-re-enact-this-scene-yourself-a-million-times-as-a-kid final fight scene where Daniel uses the Crane Technique was killer, but again, it came up and ended the movie super fast. You’ll really learn to love to hate the whole Cobra Kai group once again.

I’m sure you can find a copy at your local library or dirt cheap at Best Buy, but if you’re a member of Netflix, Karate Kid is currently streaming on there.

Now I’m off to teach my kids how to paint the house and wax my car.

What classic movies from your childhood do you share with your kids?

6 thoughts on “Sweep the Leg! Why the Karate Kid Still Rules!”