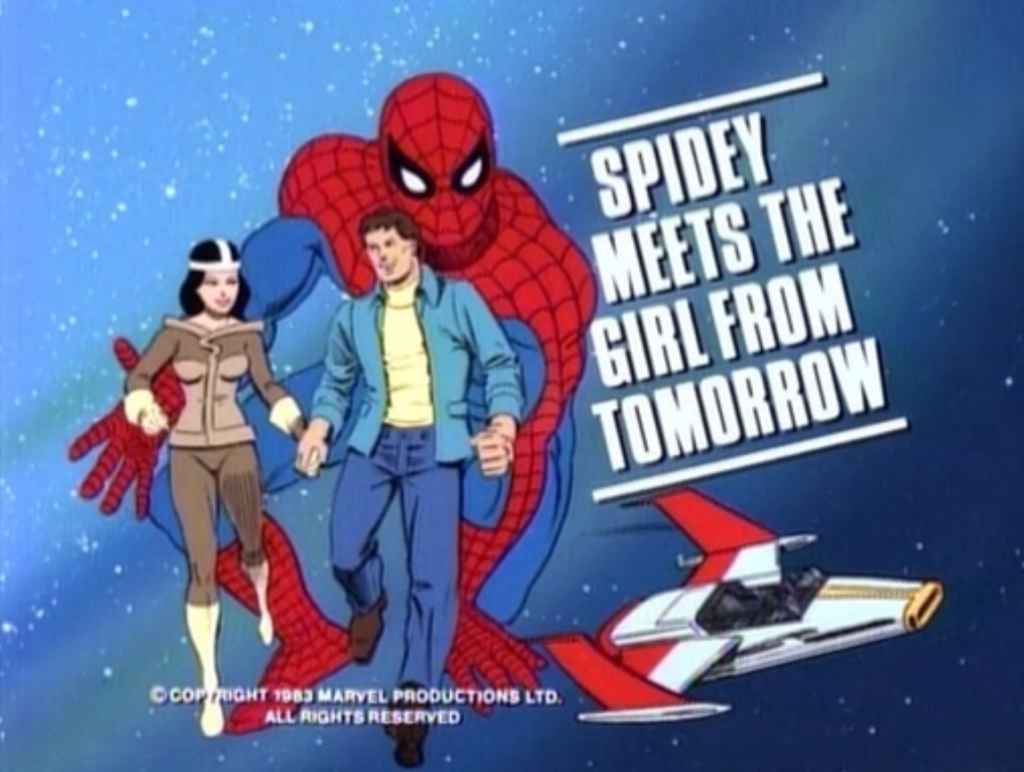 If you’ve been following my blog (and if you haven’t, why not?), you know that I recently discovered Spider-Man and his Amazing Friends on Netflix and I’ve been watching it with my kids regularly. It was easily my favorite cartoon as a kid and I just love watching it with my two boys now. But to this day, I don’t recall the infamous Spider-Man kiss.

We just finished them all, but there was a big problem with episode #22. I have very vague memories of this one, but my wife doesn’t recall it at all. She just kept screaming, “There is no way this ever aired. This has to be a lost episode. There is no way they aired this.”

Entitled “Spidey Meets the Girl From Tomorrow,” we start in the distant future where a brother and sister are joyriding on a spacecraft. They get a little too close to an area they’re not supposed to be in, stumble upon some humongous Nebula Crab and try to outrace it. They do some weird hyperspace stuff and slam on the breaks, only to cause a huge tear in time. And that’s when they crash land somewhere on Earth.

Peter Parker’s looking out of his trusty telescope and sees it crash. But so does the evil Doctor Octopus! When Peter shows up, the brother and sister think he’s an enemy and start attacking him. He calms them down and offers to help, making super googly eyes with the girl. As soon as Doc Ock appears, Peter runs off in the woods and the aliens think he’s a coward.

Spidey shows up, saves the day and the girl knows he’s actually Peter Parker. So as any good superhero protecting his secret identity does, Spidey just says, “You knew? How?” And then he… Takes. Off. His. Mask. Yeah, I’m pretty sure he violated a few superhero codes right there.

And then… they start making out. Yes, making out. Not just a peck on the cheek. Spidey puts his arms around her and the two start playing tonsil hockey. And yeah, this is some space girl he just met a few minutes ago. Definitely a far cry from the romantic upside-down Spider-Man kiss with Mary Jane from the movies. 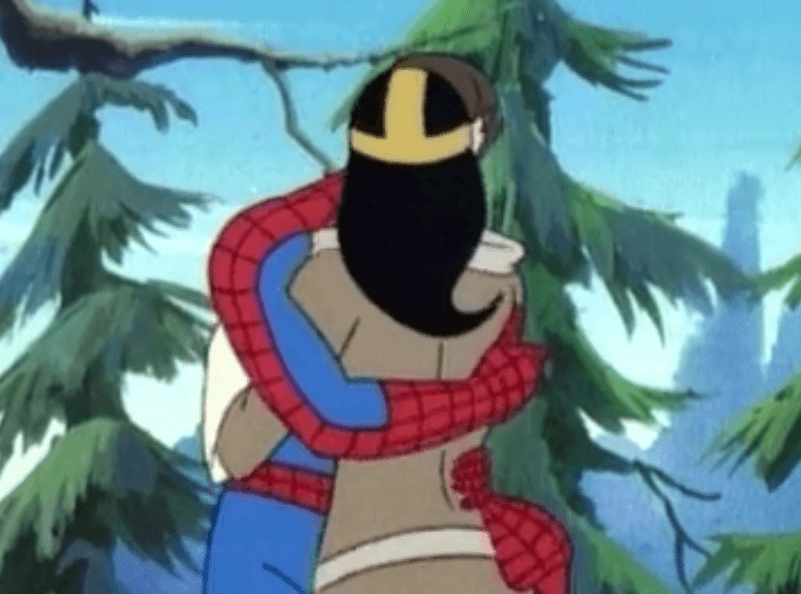 All of a sudden, Spidey’s in love. He’s literally jumping for joy and telling his new space gal that he wants to show her everything in his world. Doc Ock wants their spaceship so he keeps an eye on the scene (pervert), it starts snowing and then… yeah, Spidey starts kissing his gal again. 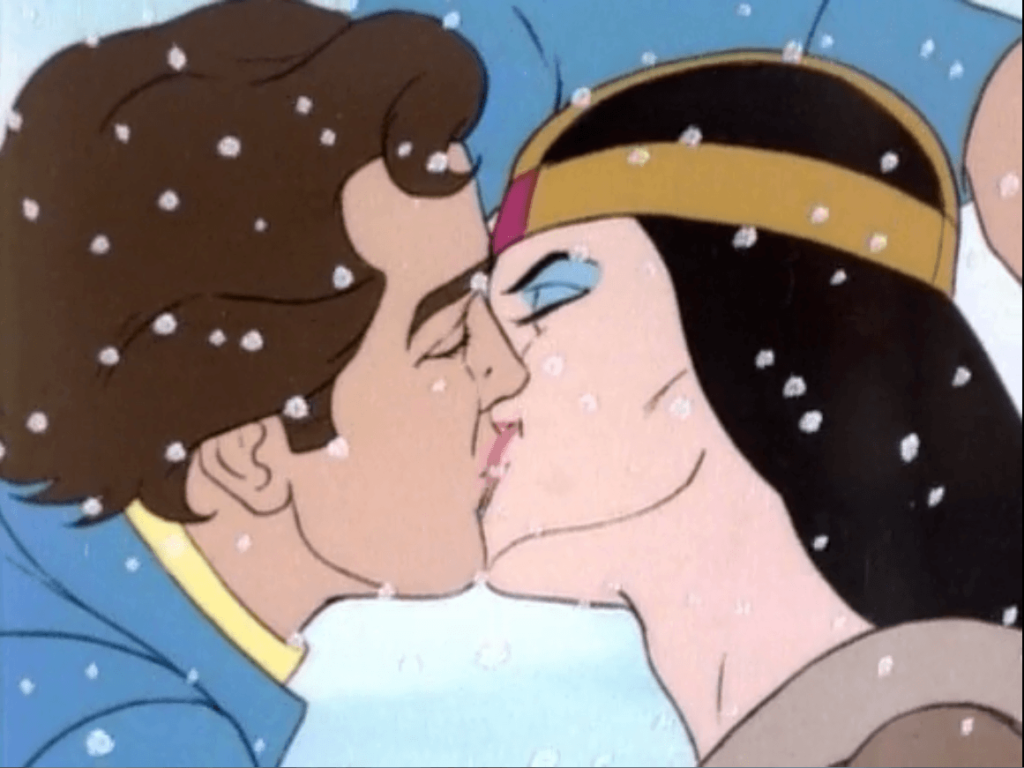 At this point, Ryan and Jason aren’t going, “ewww” like most kids would. They start laughing hysterically and saying, “Spider-Man’s kissing a GIRL!” Despite their constant pestering, I refuse to rewind any of the kissy face scenes. One Spider-Man kiss is more than enough thank you very much.

Iceman and the girl’s alien brother head off to find some element underwater, Firestar heads to a volcano for a different one, and Spidey and his gal pal search for the third element that will help them get their ship going again. Nobody knows what that third element is until Spidey and his SO happen to make it to a zoo. A zoo? Yes, a zoo. Apparently they’re not fighting crime, they’re just on a hot date. When they see an elephant, the alien girl points out that the ivory in its tusks are the final element needed.

And that’s when my wife goes ballistic.

Spidey jumps on the elephant, pulls out a nail file and starts shaving off ivory from its tusks. It seems ol’ Web-Head is apparently now a poacher, looking to score ivory from some big game. He may as well team up with Kraven the Hunter at this point! Luckily, the alien girl finds a piece of ivory beneath the elephant and stops Spidey from his clearly criminal ways. 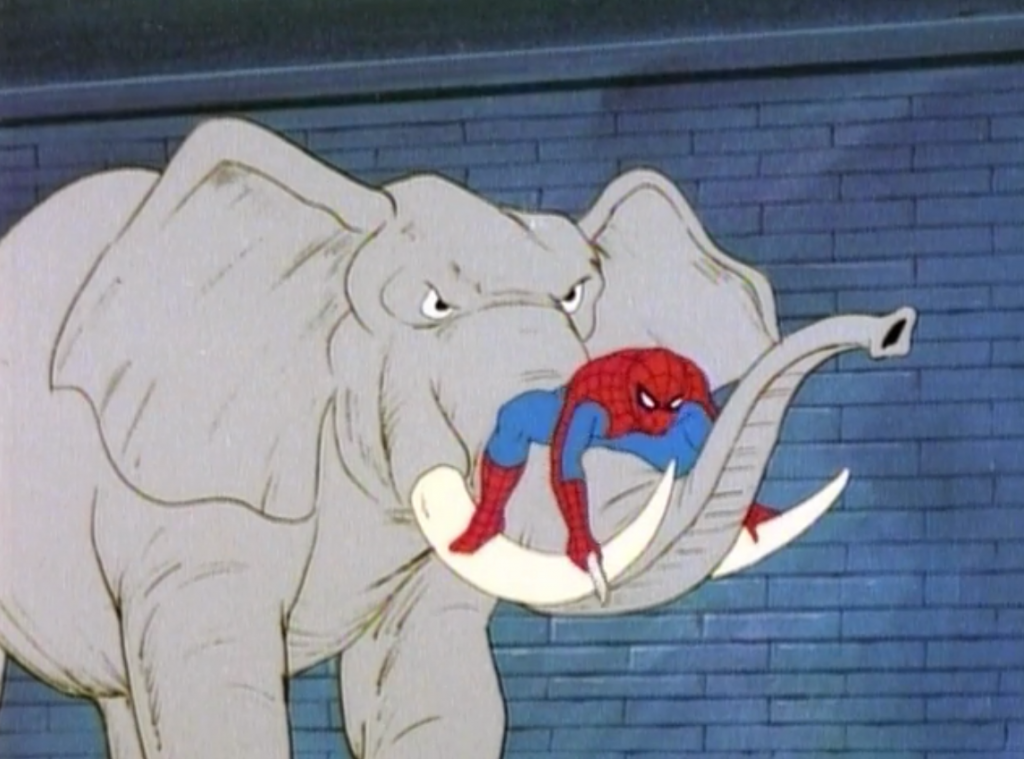 The rest of the episode is mainly everyone fighting Doc Ock and then learning that the aliens can’t survive in our time period. They have virtually no immune system, so even a common cold from our time could kill them. They need to get back to the future (Cue, Marty McFly!), and fast. Spidey and his girl have some tearful goodbyes and then Spidey says something beyond ridiculous.

Just like that. He met this alien girl today, kissed her a few times, shared a magical zoo moment with her, and now he’s just gonna jump in their ship and say see ya to the 20th century. No goodbye to Aunt May. No final hug for Ms. Lion. Not even bothering to pack a suitcase. He’s clearly so in love he can’t even think straight. That Spider-Man kiss is pretty darn powerful! And of course, his gal is so excited that it must be time for… another kiss! 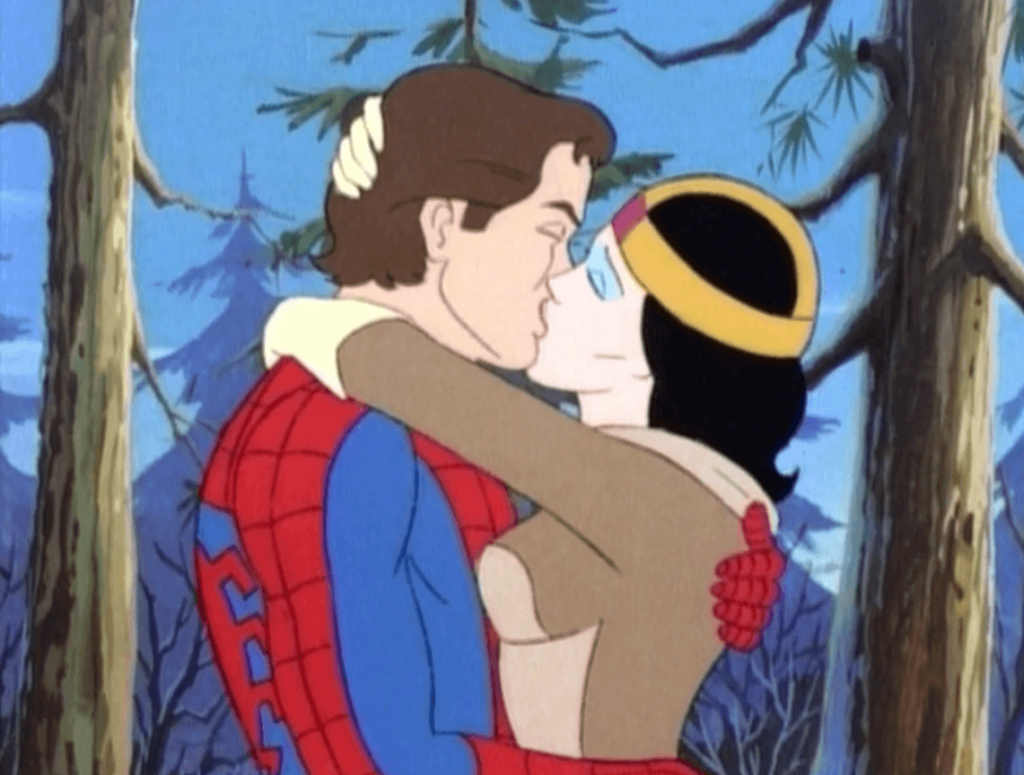 Of course, this means it’s time to say goodbye to the Spider-Friends as well. Firestar and Iceman are pretty bummed but they do support their friend. So Spidey says goodbye to Angelica (that’s Firestar by the way) the way most people say goodbye to their friends who happen to be female. Yeah, with another Spider-Man kiss on the lips. Twice! In case you thought the first time was an accident, the wall-crawler locks lips with Firestar one more time before leaving her life for good. 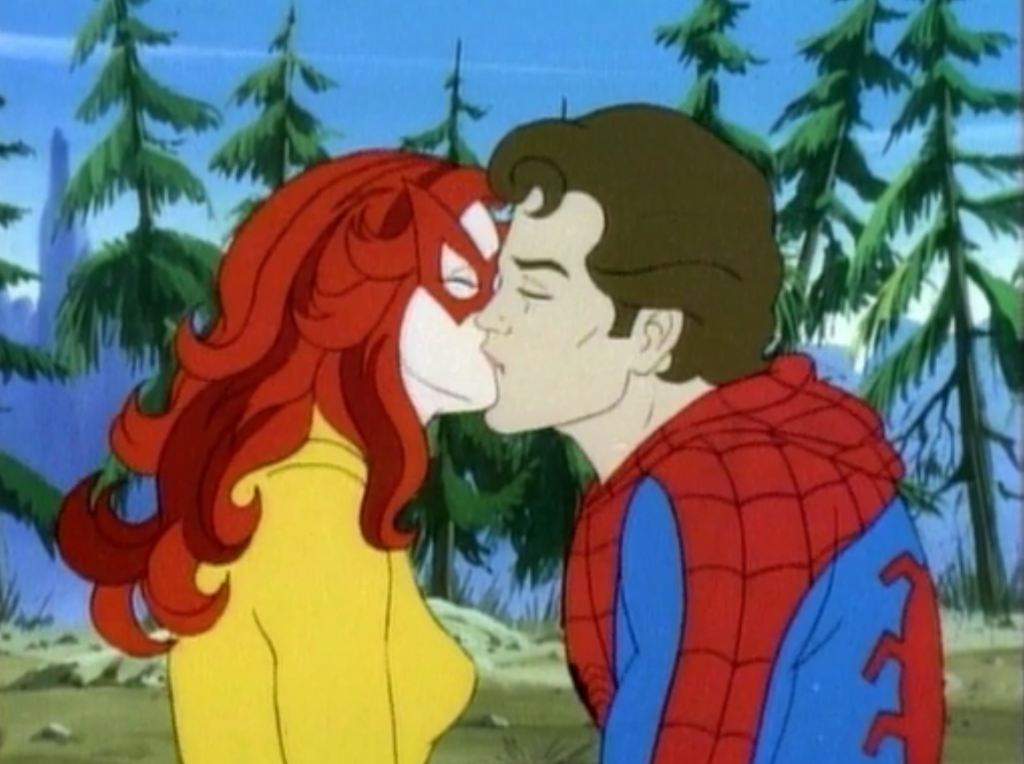 Spidey and his alien friends leave, making it back to the 48th century or wherever the heck they’re from. Things are great now, right? Of course not. The episode can’t end like that. So of course, reality sets in when the aliens’ father points out that Spider-Man can’t live with them. He’s full of germs and bacteria that could easily wipe out their population. Odd how a super genius like Peter Parker couldn’t see that one coming. Anyways, Spidey’s got to go back to his own time for everyone’s sake. But not before one final farewell kiss! 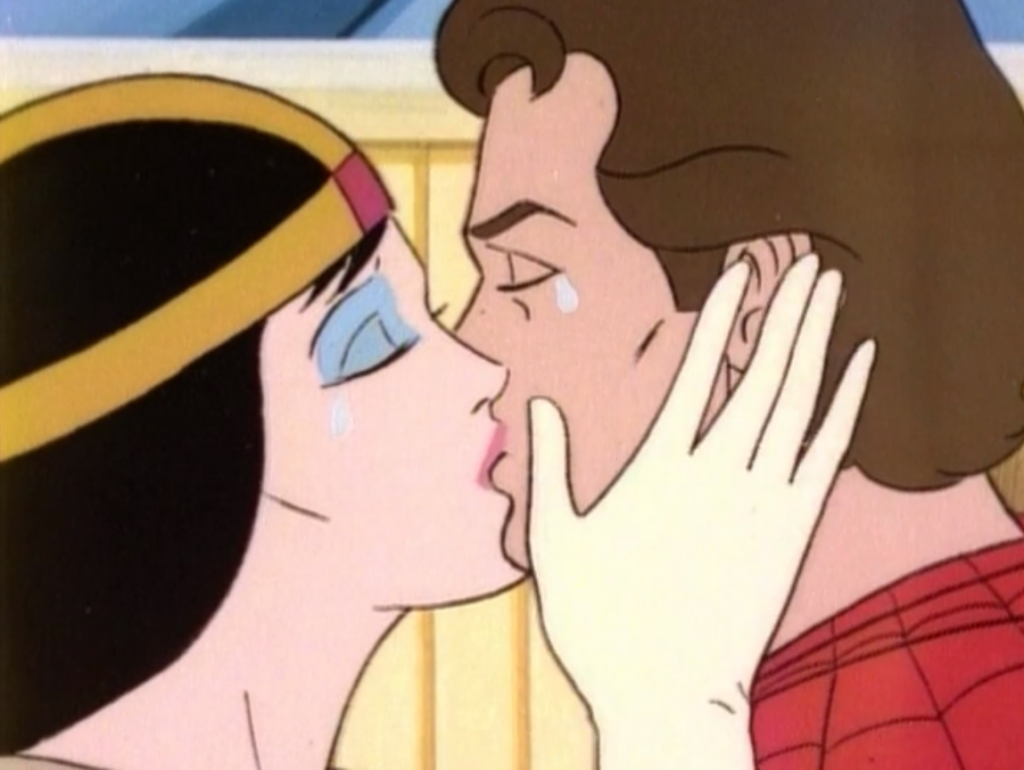 He makes it home, reunites with the Spider-Friends and the episode ends. Yeah.

“Inappropriate!” was all my wife could utter at the end of the episode. My kids, on the other hand, just keep saying, “Again! Again! Let’s watch it again! I want to see the Kissing Episode again!”

I don’t usually agree with J. Jonah Jameson, but this time I think our friendly neighborhood Spider-Man may actually be a menace.

26 thoughts on “Spider-Man, My Kids and the Kissing Episode”