Star Wars Celebration is going on right now in Chicago and The Force is stronger than ever. That’s because Disney has dropped the name of the final “original” trilogy film… Star Wars: Episode IX – The Rise of Skywalker. They even announced a release date of December 20.

Oh, and they also surprised the world with a little teaser trailer. Gah! Cover your keyboard to protect it from the drool and take a gander!

Did you get goose pimples like I did? Seriously.

Story wise, not much is explained. But snippets of awesomeness prevail, which no doubt will lead to eight long months of theories and speculation.

First, we start out with Rey on some (surprise!) desert planet. Note that she’s in all white now, rather than grey from the last film. Seems she’s further embracing the Light Side of The Force!

I absolutely love this opening where she’s all alone, taking on a single TIE with nothing but her wits and her lightsaber. Oh, and is that Luke’s old lightsaber now working?

I’m not sure if it’s Kylo Ren flying the TIE but it seems pretty likely.

Then there’s the Han Solo-killer himself, Kylo Ren. He’s off slaughtering people in a forest somewhere. Are these guys natives of the planet? Some new form of The Resistance?

Not sure, but at the moment, Kylo is maskless if that means anything. We do see him working on fixing his mask later in the trailer though. To me, it looks like he’s going over the Dark Side deep end in this tale.

So great seeing the late Carrie Fisher making an appearance in this one. She’s clearly comforting Rey, but why? And there’s a scene with someone (Rey? Leia?) holding a Rebel Medallion. My guess is that’s the one given to Han at the end of the original Star Wars film. I’m banking on Leia holding it as she thinks about Han.

And yes, I’m still annoyed that Chewbacca didn’t get a medal in the original film.

Speaking of Chewie… he’s back in the co-pilot seat of the Milleninum Falcon. This time with our old scoundrel friend Lando Calrissian! Billy Dee Williams is back and he’s once again a site for sore eyes. I loved seeing a young Lando in SOLO and now I love seeing the older Lando here.

He’s always had a soft spot for our core characters so it’s great to see him join the last hurrah.

And then there’s a few scenes of the full gang together. Unlike Episode VIII – The Last Jedi where the characters were all off on separate adventures, director J.J. Abrams revealed that the cast would all be together on one mission as a team. Even BB-8’s got a new pal in mini-droid D-O.

Two other huge takeaways from me that are worthy of jaw drops:

I loved Episode VII – The Force Awakens. It was a perfect relaunch of this Skywalker story. I enjoyed Episode VIII – The Last Jedi, even though I know diehard Star Wars fans were very split on the film. But seeing the trailer for Episode IX – The Rise of Skywalker brings me back to my childhood as I sat in the Lafayette Theater in Suffern, NY, watching Return of the Jedi.

That was, at the time, what I thought was the end of this Skywalker Saga. But now I get to truly see the end of this double trilogy (no, I will never accept Episodes I-III, so don’t even try) and I absolutely cannot wait!

Who is the Skywalker in the Episode IX Title?

What does the title mean though? Rise of Skywalker? Who is the Skywalker in question?

Could it be Luke returning from the dead?

Is it Kylo moving from the Dark Side to the Light Side, just like his grandpa Anakin did at the end of Return of the Jedi?

Maybe it’s Rey after all. I still don’t buy that she comes from nothing. I would not be surprised if she is indeed a Skywalker.

Or did Luke or Leia have a secret kid somewhere that we’ll finally get to meet?

What do you guys think? Let me know in the comments below! 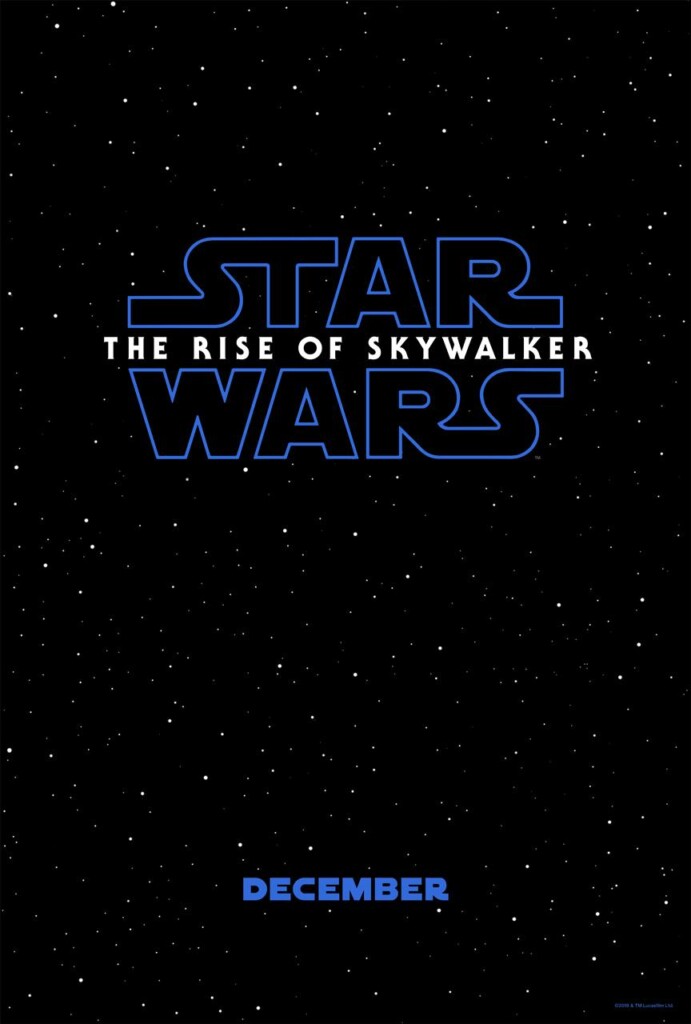 Star Wars: The Rise of Skywalker
in theaters December 20