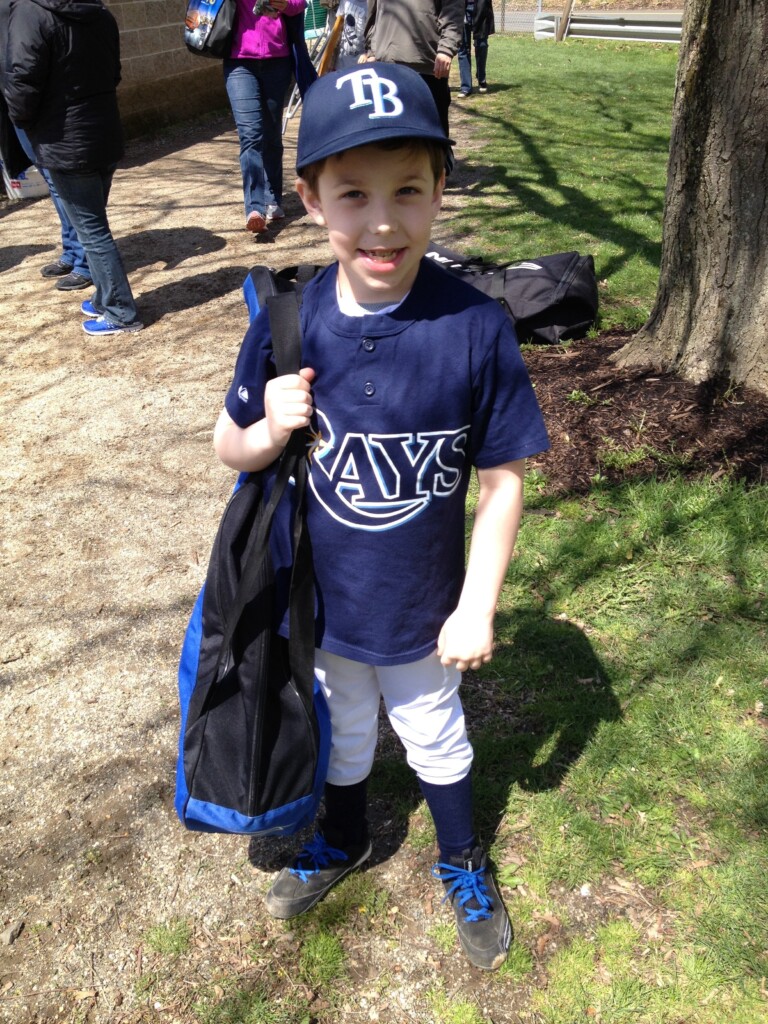 Last weekend, Ryan played in his second Little League game ever. And I couldn’t be prouder.

This is actually his first year playing Little League. He came to Allie and I asking to play, so how could we even think of saying no?

Yes, we asked him a zillion times to be sure, informing him that it’s a big committment with a lot of games and practices. As most 8 years olds would do, all he heard from us was probably, “Little League, blah blah blah blah blah games blah blah practices.”

Anyways, so far he’s really enjoying it. He’s one of the smaller kids on the team and a number of the others have played at least a year already so they have the basic skills down. Ryan’s always had a solid arm and at home, he’s got a great swing. When we’ve played whiffle ball in the backyard, he’s almost ripped my head off a number of times with a quick crack of the bat.

In his first game, he swung at just about every pitch no matter where it was. All strikeouts. In the field, the ball never came near him. Still, he enjoyed himself.

So you could understand my parental fear when we bumped into his coach Saturday morning at a school event and he turned to Ryan and said, “Hey, Ryan! You want to pitch today?”

Ryan, thought for a second and then said no. But his coach didn’t give up. He asked him again and told him it’s okay if he walks everyone and gives up runs. He just wants Ryan to try it and have fun. And if he doesn’t like it, he should tug on his ear, and the coach would pull him out.

We raced home and immediately started practicing in the driveway. He was actually pretty good, especially compared to most kids at this age. His control was fine and he got it close to the plate most of the time. My only fear, though, was that Ryan doesn’t give it his full shoulder, so often the ball doesn’t go far.

I had no idea how many feet from home plate he’d have to pitch, so I wasn’t even sure we were practicing correctly. I had visions of him throwing the ball and having it bounce halfway between him and the batter.

We got to the game and Ryan’s team (Go, Rays!) was up first. Even cooler, Ryan was batting in the lead-off slot! I tried talking to him again, telling him not to swing at every pitch. And he listened. Almost to the other extreme.

He ended up drawing a walk! This pitcher actually wasn’t so great, throwing half his pitches in the dirt. But it didn’t matter, Ryan got to be on base! I was super excited, as was he!!!

And then… the next two batters walked! Suddenly my little guy was on 3rd base as the coach gave him the lowdown!

The next batter? No, he didn’t walk. He smacked a 3-run triple instead!!! So far, Ryan had gotten up, walked, got on base and scored! All in just the 1st inning. Best game ever!

After the inning ending, my heart leapt to my throat. It was Ryan’s turn on the mound. The coaches were all great, telling us not to worry, he’ll be fine. He warmed up and again the coach told him to tug his ear if he wanted to stop.

Turns out, no ear tugging was necessary. Not even close. 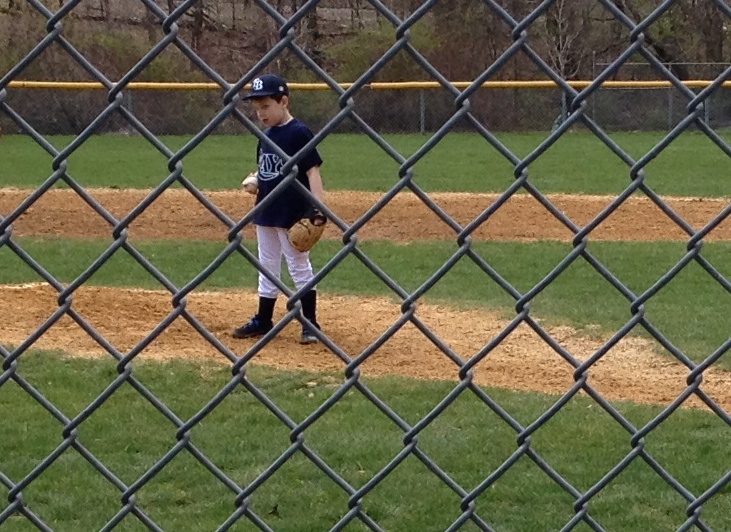 Ryan’s first pitch was a strike! He threw a few balls and ultimately struck out the first batter! You probably heard my screams from wherever you were on Saturday.

Sure, Ryan threw some pitches in the dirt and some way outside. But overall, he did a great job. In fact, he only walked two batters and struck out 3! Yep, he retired the side!

I even caught the final strike of his third strike out on video:

My little pitcher who had played only one Little League game before this was up on the mound and just pitched a fantastic first inning!

The team and the coach were jumping up and down like mad. As they ran back to the dugout, the coach pulled everyone into a team huddle and led them all in a “1-2-3, Ryan” cheer!

Can you tell I’m still beaming with pride? 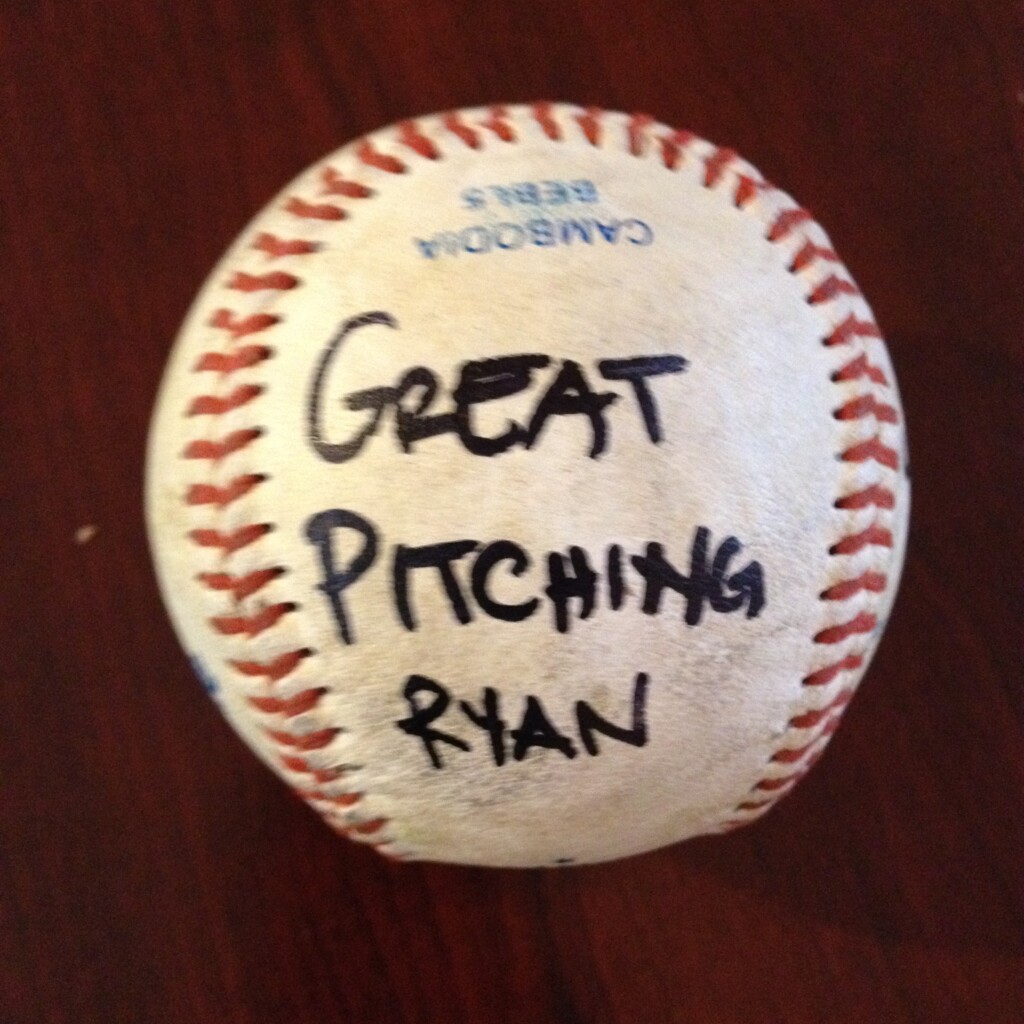 Oh, and after the game, Ryan was given the game ball by the coach. He signs a ball and gives one out after every game to the one player who really stood out. It’s already in a special place up in Ryan’s room.

Will Ryan get to pitch again this season? Will he do as well or better? I have no idea. But no matter what, I just know he pitched one hell of a game and once again, he did something he wasn’t comfortable doing and came through with flying colors.

It’s really amazing the life lessons we can all learn from our kids.