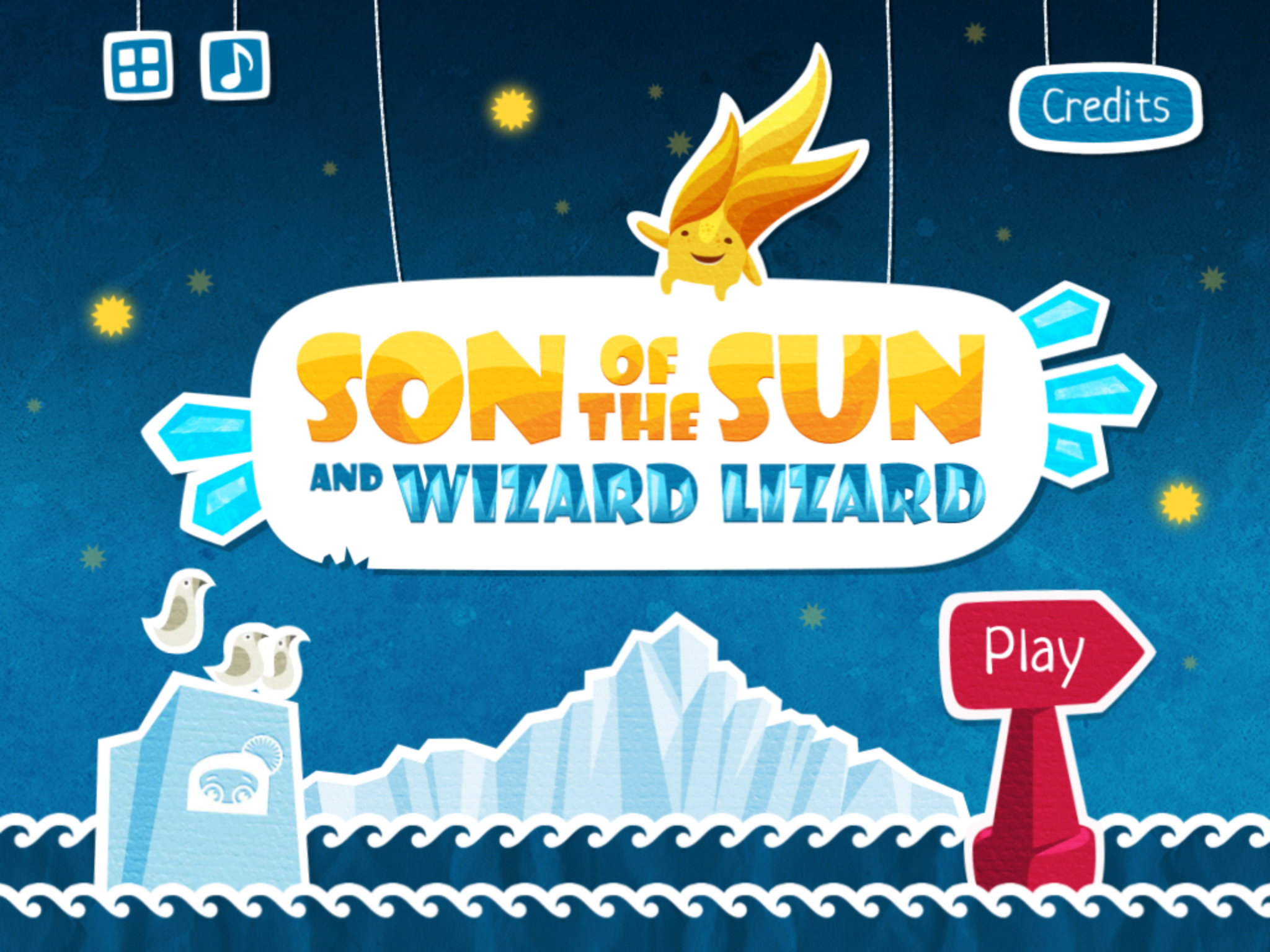 I’m a big fan of reading. I mean, what writer isn’t? So anything that gets kids excited about reading gets an immediate thumbs up from me.

I was asked to review an interactive story app for the iPad called Son of the Sun and the Wizard Lizard by KidAppers. And to be quite honest with you, it’s like nothing I’ve ever experienced before.

The story itself is a wonderful and charming tale about the Sun’s children who head out into the universe. We follow one sunbeam who heads to Earth and encounters all sorts of adventures. This particular story places him at the North Pole where he confronts danger in the form of a sorcerer-like villain called the Wizard Lizard.

I won’t spoil any more of the story except to say things aren’t always what they seem. There’s some wonderful lessons in here too all about spreading good throughout the world. 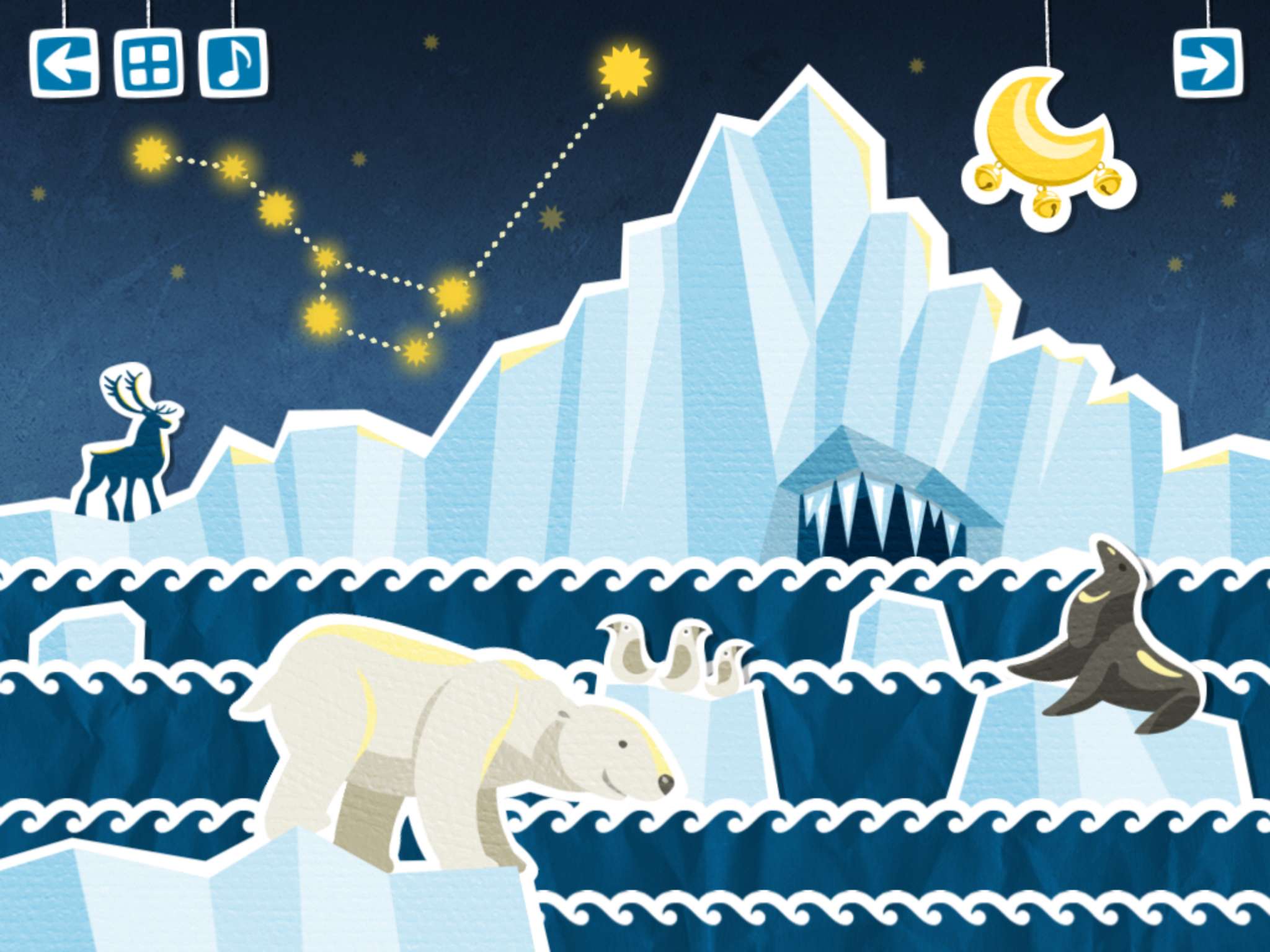 As cute as the story itself is, I just absolutely love the art. The whole book reminds me somewhat of an Eric Carle picture book. It’s a wacky, fun, lesson-filled adventure with beautiful and colorful illustrations. It almost seems like each picture was carefully hand drawn on thick pieces of paper and then cut out and placed on a page.

Now into that beautiful magical world go ahead and toss in some of the most innovative and interactive storytelling you’ve ever seen. The app alternates between text and animations. But it’s not as simple as that sounds. The text pages are certainly heftier than a standard picture book. In other words, there’s a good meaty amount of words in each of the 10 chapters.

You can either read the text yourself or have the app’s narrator read it to you as the text slowly scrolls up the page. There’s also a small “movable” illustration on each text page too. It’s generally one of the story’s main characters, and again, it looks like a high-tech craft project with the “cut out” character hanging by two pieces of yarn. Tap or swipe at it and watch it move around. 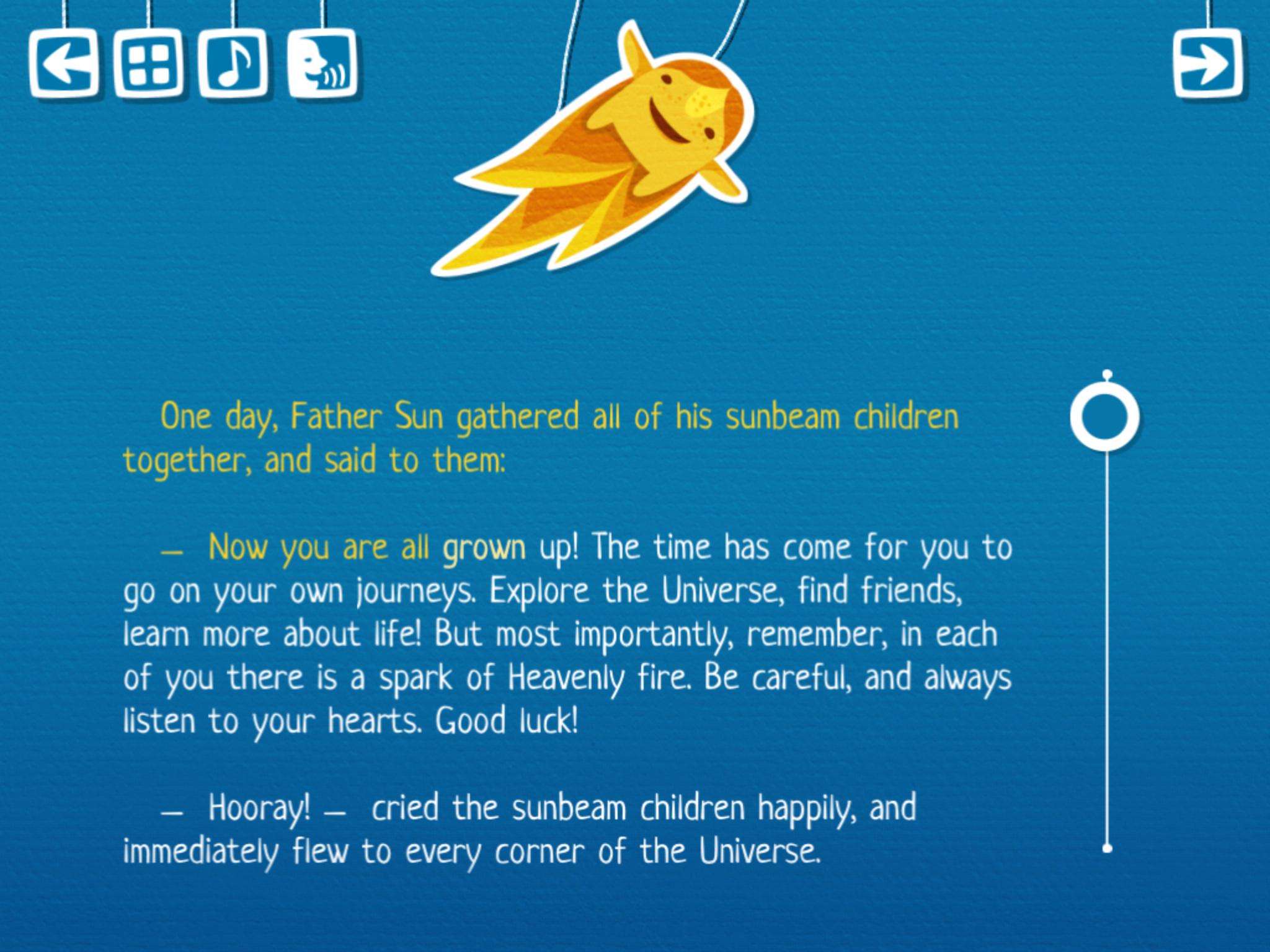 As for the illustrated pages, that’s not quite an accurate description either. This isn’t a cartoon, not by any means. You need to click on various items on the page (sometimes repeatedly) to help move the story along. Sometimes it relates directly to the current actions in the story; other times there’s just loads of fun things popping up that are sure to put a big smile on your little one’s face. (I’ll admit, I even laughed out loud at one point.)

If I could sum up Son of the Sun and the Wizard Lizard in just two words, they’d be: interactively adorable. Seriously, there are so many cute little touches crammed into every nook and cranny of this app that you and your child are bound to keep discovering new things every time you read it. 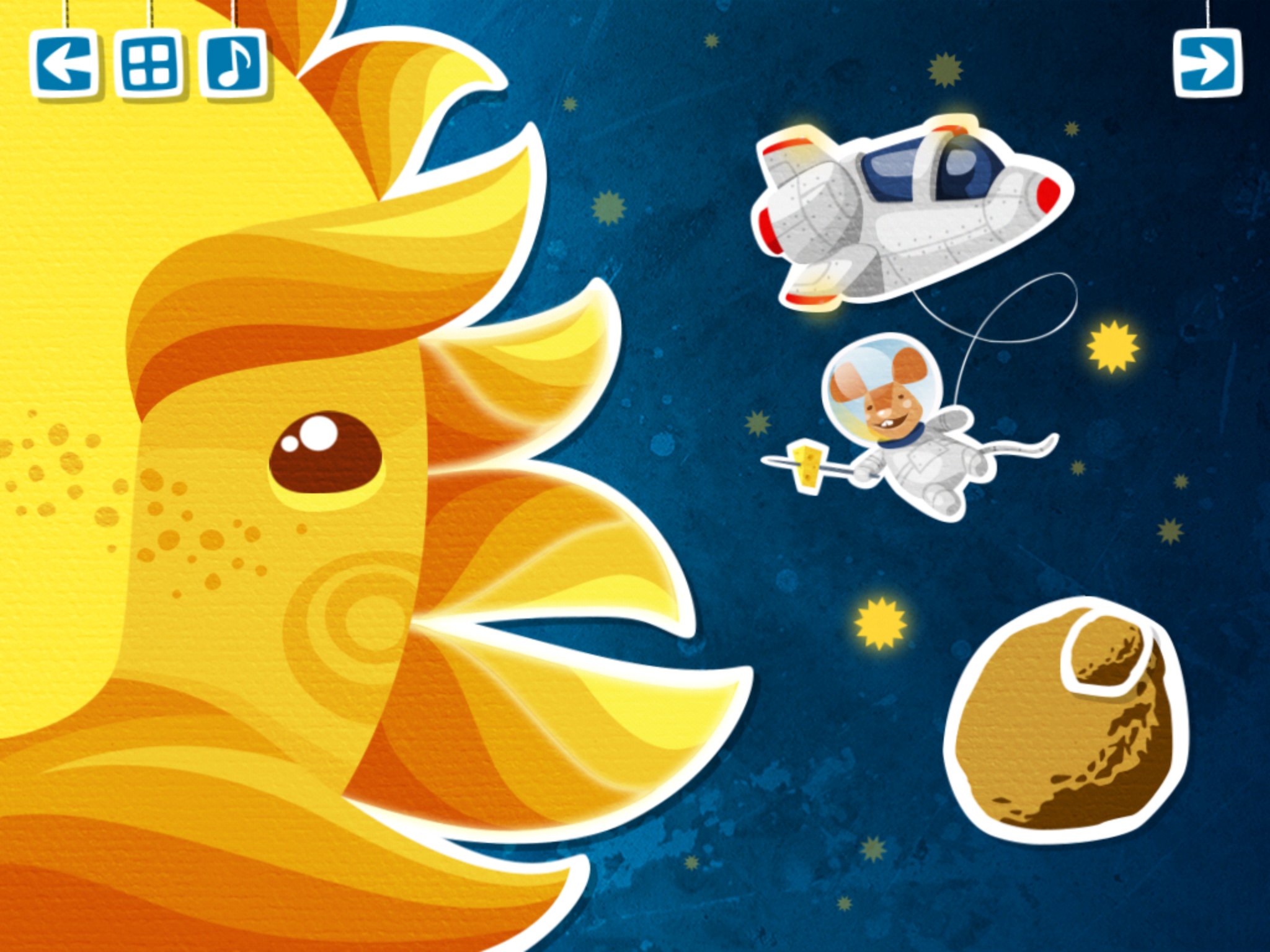 Even the voices and sound effects are just too darn cute. My favorite has to be this little mouse that runs through the entire app. He has nothing to do with the actual storyline, but he pops up all over the place, joining in on the fun. One scene has him as an astronaut mouse roasting a hunk of cheese on a stick right near the sun. It’s a small touch but it’s those little details that carry through the entire app that just put the final cherry on top of this delicious sundae of a story.

Of course there’s also a number of puzzles to solve along the way, though you can keep reading the story without solving them if you’d like. It’s just yet another rich layer in this perfectly executed interactive application. 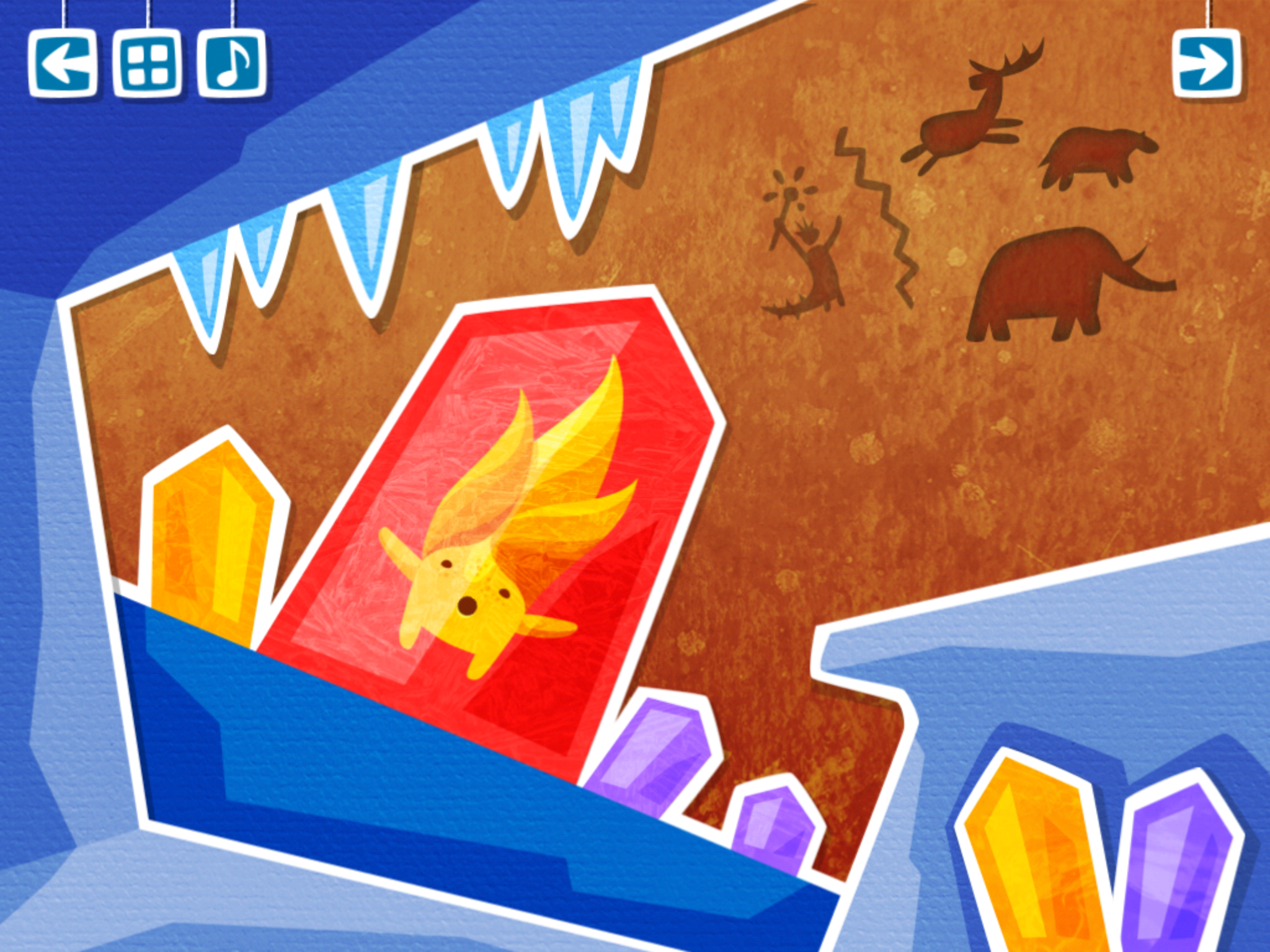 While this app is clearly geared at kids just learning to read or younger, I’m fairly certain both my boys (8 and 10) would be intrigued enough to play around with it. It’s this kind of innovation that truly shows what an electronic version of a book can be like. It’s not just “copied and pasted” from print into pixels. No. The gang over at KidAppers have truly raised the bar on interactive storytelling. They easily get an A+ from me.

I for one, hope the Son of the Sun gets to share dozens more adventures with the world!

Buy SON of the SUN from the App Store

5 thoughts on “When Your Dad’s the Sun, You Just Know Adventure Awaits”