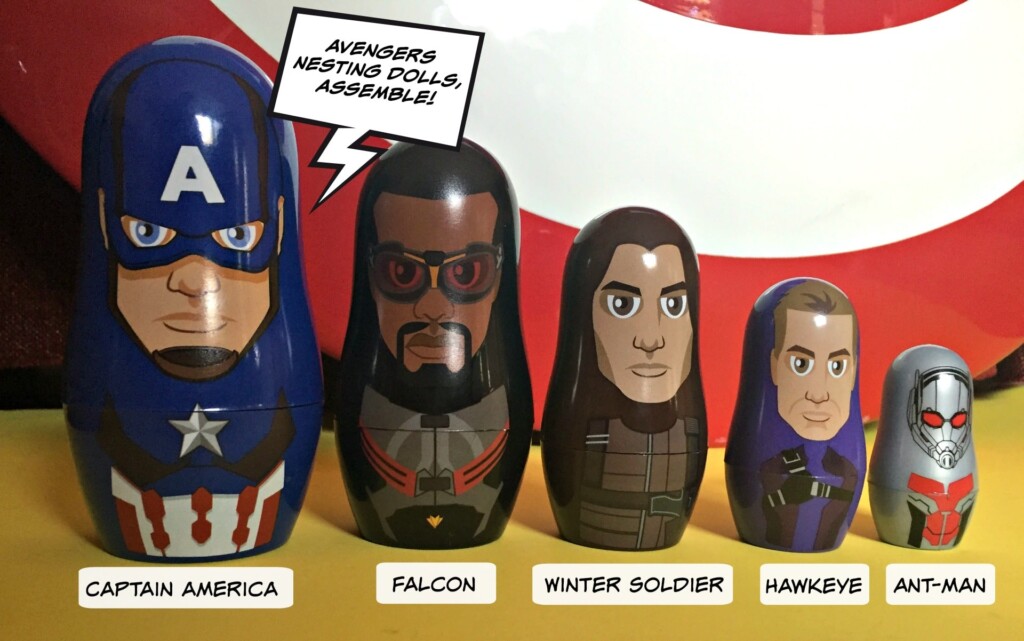 Okay, they may have started as Russian Nesting Dolls, but these adorable (and collectible!) toys are now everywhere. Case in point, the fine folks over at PPW Toys have put out a line of Captain America: Civil War Nesting Dolls! 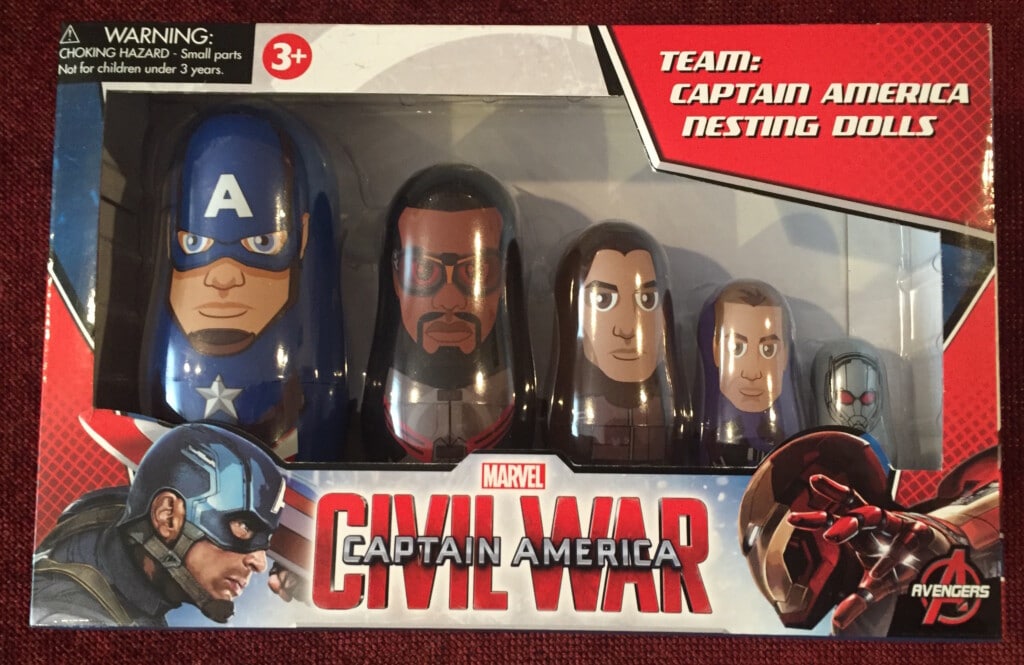 What’s extra cool is that there are two different sets available: #TeamCap and #TeamIronMan! 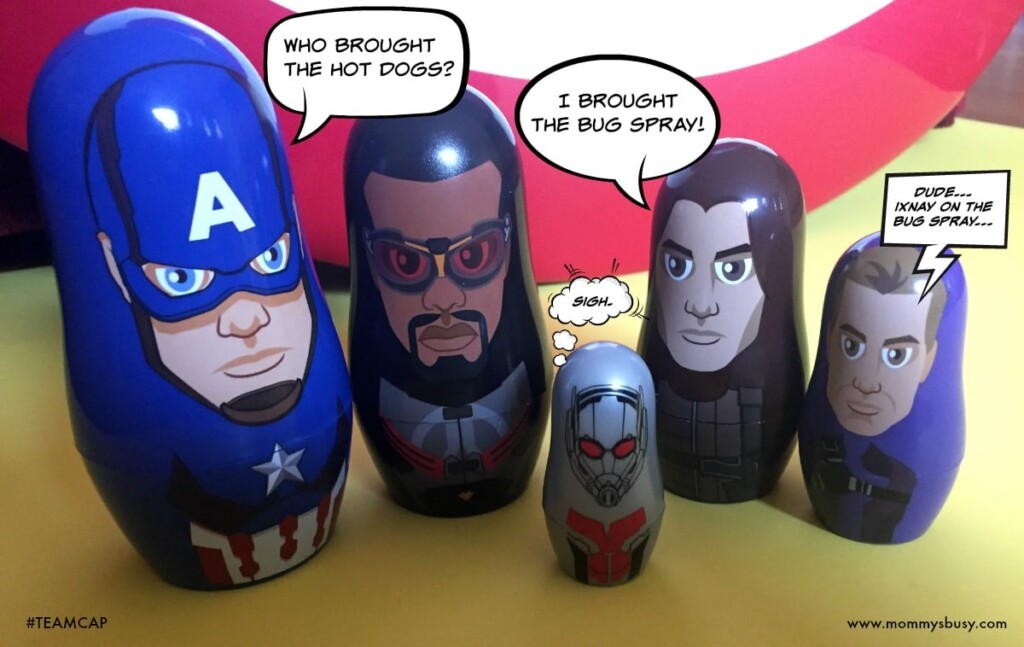 I’ve always loved nesting dolls. I’m not sure what it is about them, but they’re just a blast to play with. I remember my sister having an old wooden set and I’d hide some of my action figures and accessories in them!

I had a blast playing around with Team Captain America and even got Ryan to help me create an excelelnt video showing off the playability of these guys. I call this one, “Iron Man Acts Like a Jerk and Gets What’s Coming To Him.” Enjoy!

So what did you think? Are you starting to see my side of things and feel like joining #TeamCap? Yeah, I thought so.

These five plastic Collectible Nesting Dolls range in size from 2″ up to 4.5″ and each stacks inside the other. Team Captain America includes a bevy of good guys: Captain America, The Falcon, The Winter Soldier, Hawkeye and the biggest little hero there is, Ant-Man!

Now, I happen to be in a Blogger Civil War with Drew these days. It’s a shame because we were such good friends before, but he clearly chose the wrong side in the Marvel Civil War. We just can’t see eye to eye when it comes to who the real hero is. (That’s Captain America, if any of you are still confused.)

However, there is one thing the two of us can agree on: We love our readers! That’s why we’ve decided to put our differences aside (slightly), to work on a joint blog giveaway! That’s right, we’re teaming up with PPW Toys to offer 1 lucky reader the Ultimate Captain America: Civil War Nesting Dolls Prize Package! 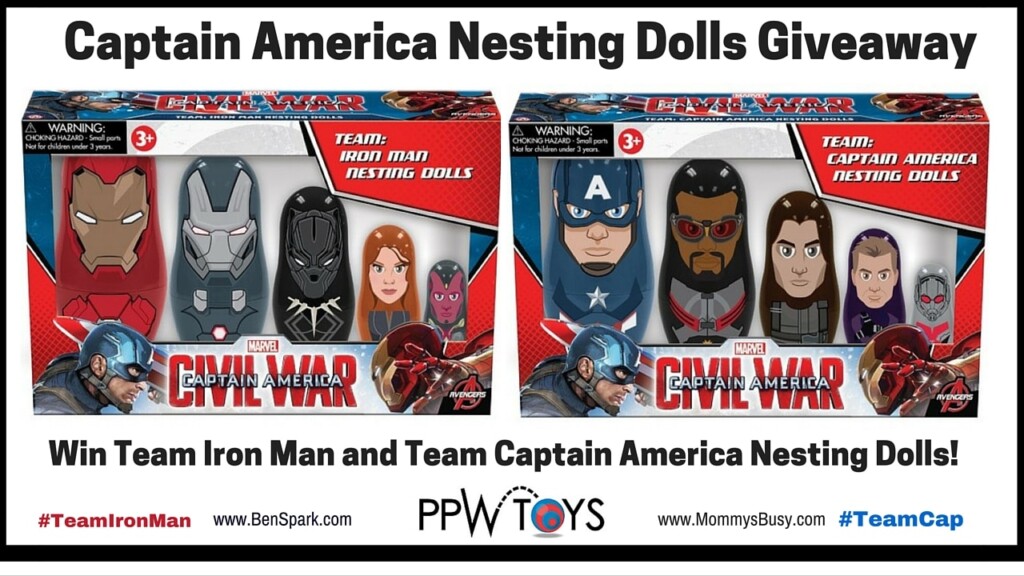 Giveaway ends on April 4 at 11:59 p.m. ET. The 1 winner will be chosen at random from all entries across both blogs (www.mommysbusy.com and www.benspark.com), and announced on both sites. Giveaway is open only to legal residents of the fifty (50) United States (including District of Columbia), who are at least eighteen (18) years old at the time of entry. The 1 Winner will be notified by email and have 48 hours to respond or a new winner will be chosen. Prize provided by PPW Toys. Grand Prize includes: 1 Captain America Civil War Nesting Dolls – Team Captain America and 1 Captain America Civil War Nesting Dolls – Team Iron Man.