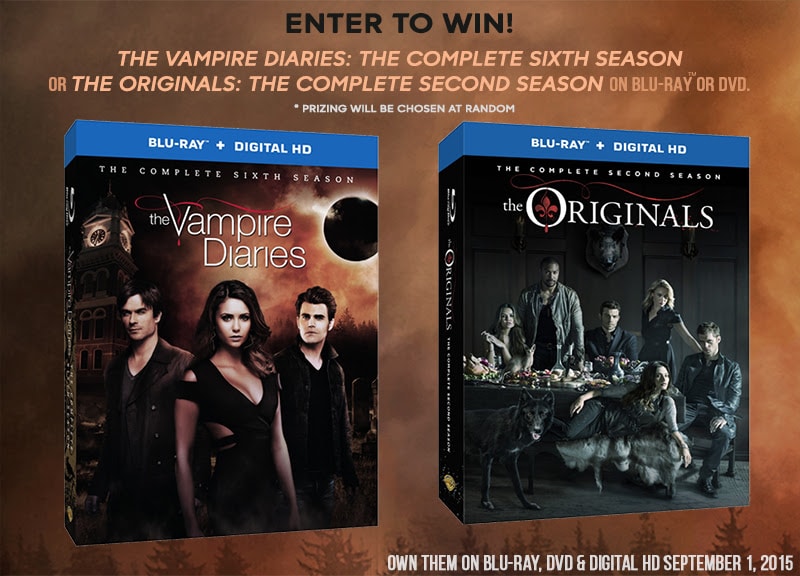 I’m not a big fan of horror movies. Which is funny because I love horror books. Heck, Stephen King is one of my favorite authors! I just don’t love the spooky/scary/gore-filled films I guess.

I do, however, love the supernatural. Vampires. Witches. Werewolves. Those I’ve always loved. (With the sole exception being those glittery lovey dovey vampires…)  Now, I haven’t seen The Vampire Diaries or The Originals yet, but I think it’s time I added them to my regular roster!

For those who are fans, check out this exclusive interview with Julie Plec, the creator of both shows, in which she counts down her Top 5 episodes from the most recent seasons of The Vampire Diaries (Season 6) and The Originals (Season 2)!

About The Vampire Diaries The Complete Sixth Season

The Vampire Diaries continues its sixth season with more delicious drama to sink your teeth into. In season five, after a passionate summer with Damon, Elena headed to Whitmore College with Caroline, not knowing Bonnie sacrificed her life for Jeremy’s. Meanwhile, Stefan and Caroline’s friendship deepened as they stood up to the Travelers, a nomadic witch tribe driven to strip Mystic Falls of magic and cast out its supernatural residents. In the shocking season finale, Damon, fearing he would lose his loved ones on the crumbling Other Side, made a huge sacrifice to bring them all back — with catastrophic and heartbreaking results. Season six follows the characters’ journey back to each other as they explore the duality of good versus evil inside themselves. Matt Davis reprises his role as Alaric Saltzman, recently returned from The Other Side. Plus, the season will make you misty-eyed as the departure of a major character will turn lives upside down and leave us asking what happened to Mystic Falls.

About The Originals The Complete Second Season

As Original vampire-werewolf hybrid Klaus Mikaelson returned to the vibrant, supernaturally charged city of New Orleans in season one, he was stunned to learn — along with his siblings Elijah and Rebekah — that Hayley, a werewolf, was pregnant with his child, and his vampire protégé, Marcel, whom the Original siblings had thought long dead, was ruling the French Quarter. Soon, a bloody war escalated between vampires and witches — the stakes raised by powerful teenage witch Davina and by Klaus’s bond with Cami, a student with a painful past — and a ruthless pack of wolves seized the opportunity to stage a violent coup. Now, in season two, a new status quo must be adjusted to, as the newly empowered werewolves control the city. Klaus struggles with weaknesses as Elijah desperately tries to save Hayley — now a hybrid — from a vicious spiral of self-destruction. Meanwhile, with the re-emergence of several Mikaelsons, “family is power” takes on new meaning.

For some real fun, you can take the below quiz to see if you could be a Supernatural Being!

And now for even more fun… one lucky winner will get to take home either The Vampire Diaries Complete Sixth Season or The Originals, The Complete Second Season!

Giveaway ends on September 16, 2015 at 11:59 p.m. ET. The 1 winner will be chosen at random and announced on this site. Giveaway is open only to legal residents of the fifty (50) United States (including District of Columbia) and Canada, who are at least eighteen (18) years old at the time of entry. The 1 Winner will be notified by email and have 48 hours to respond or a new winner will be chosen. Each household is only eligible to win (1) The Vampire Diaries Season 6 or The Originals Season 2 chosen at random via blog reviews and giveaways. Only one entrant per mailing address per giveaway. If you have won the same prize on another blog, you will not be eligible to win it again. Winner is subject to eligibility verification.