I’ve written about SuperCell’s awesome Clash of Clans app before. It’s a lot of fun and something I was able to play with my kids and their friends! Recently, when my 10-year-old son Ryan started playing SuperCell’s newest game Clash Royale, he was so excited that I had to try it.

And I was hooked. Just like that. So is Ryan. So is my other son Jason. My wife, well, she just rolls her eyes.

Ryan loves this game so much (and watches countless YouTube videos about it), that I asked him to write up a post for Mommy’s Busy, Go Ask Daddy. And that’s just what he did! So read on to see what a 10-year-old thinks about Clash Royale! And if you like what you read, show Ryan some support by leaving a comment below! 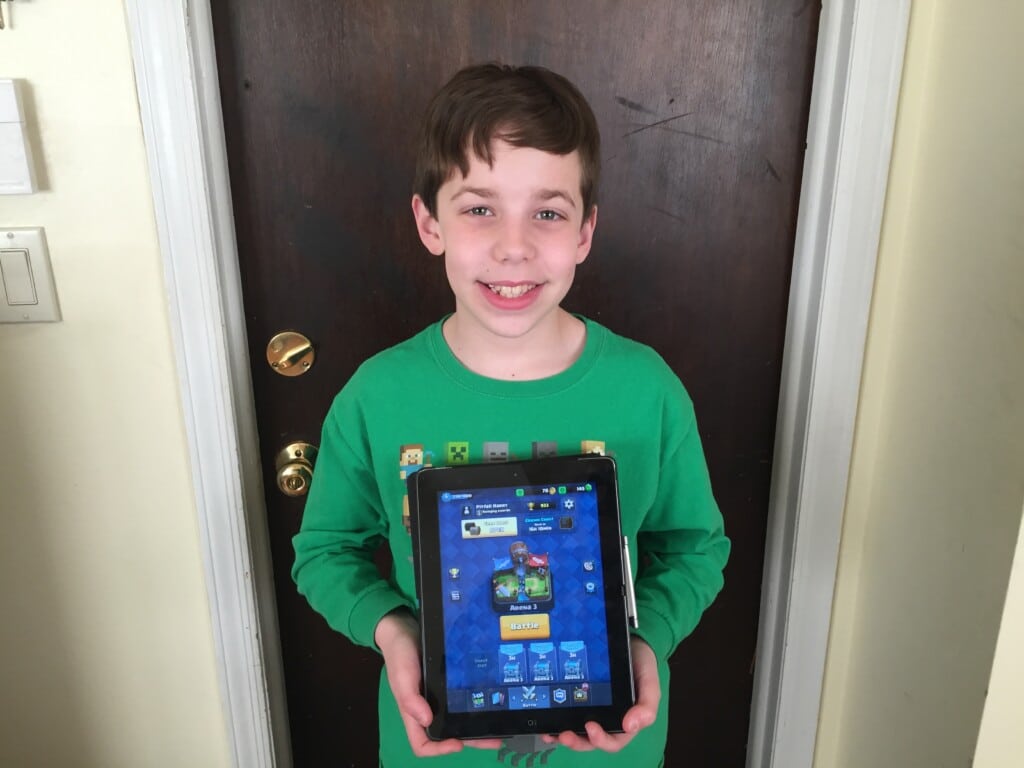 Clash Royale is a fun, exciting, real-time battle strategy game. Don’t think it’s a bad game just because you don’t like Clash Of Clans. [EDITOR’S NOTE: Ryan loved Clash of Clans and played it obsessively until he discovered Clash Royale.] There are great unique differences between the two games even though they are both made by the amazing company Supercell. 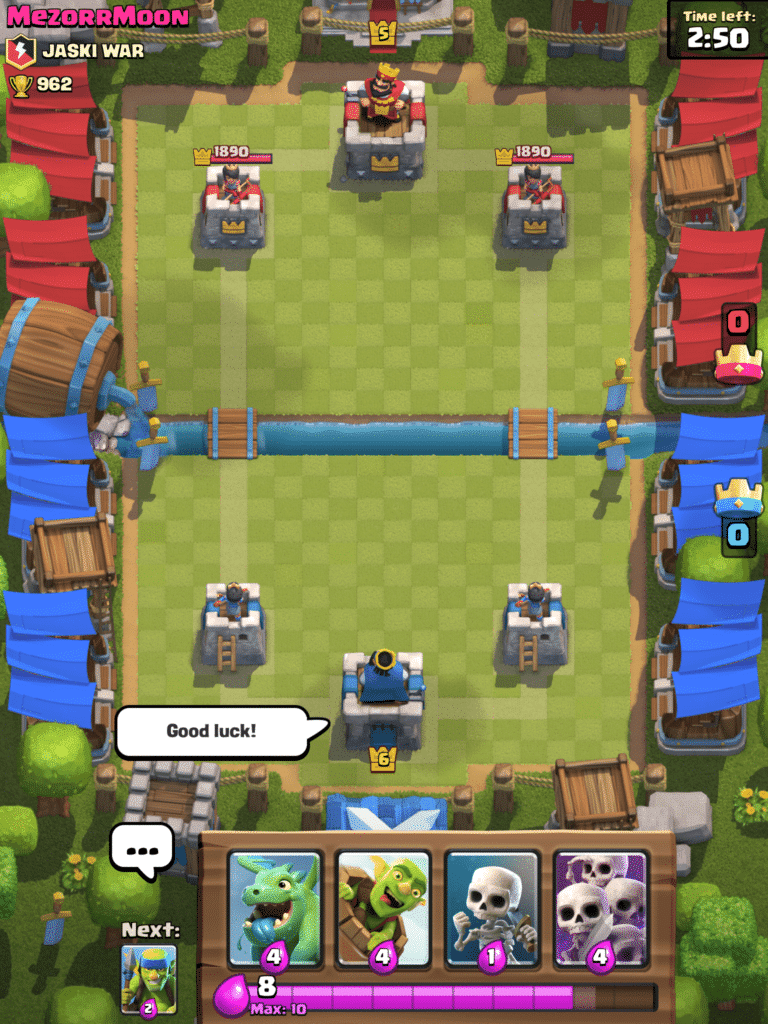 The Style of Play:

Clash Royale has a unique fun style of play.

In the game, you fight someone in a real-time battle with cards trying to defend your two archer towers and your king tower but also trying to deal enough damage to the opponent’s tower using the deck of cards you are equipped to destroy it. 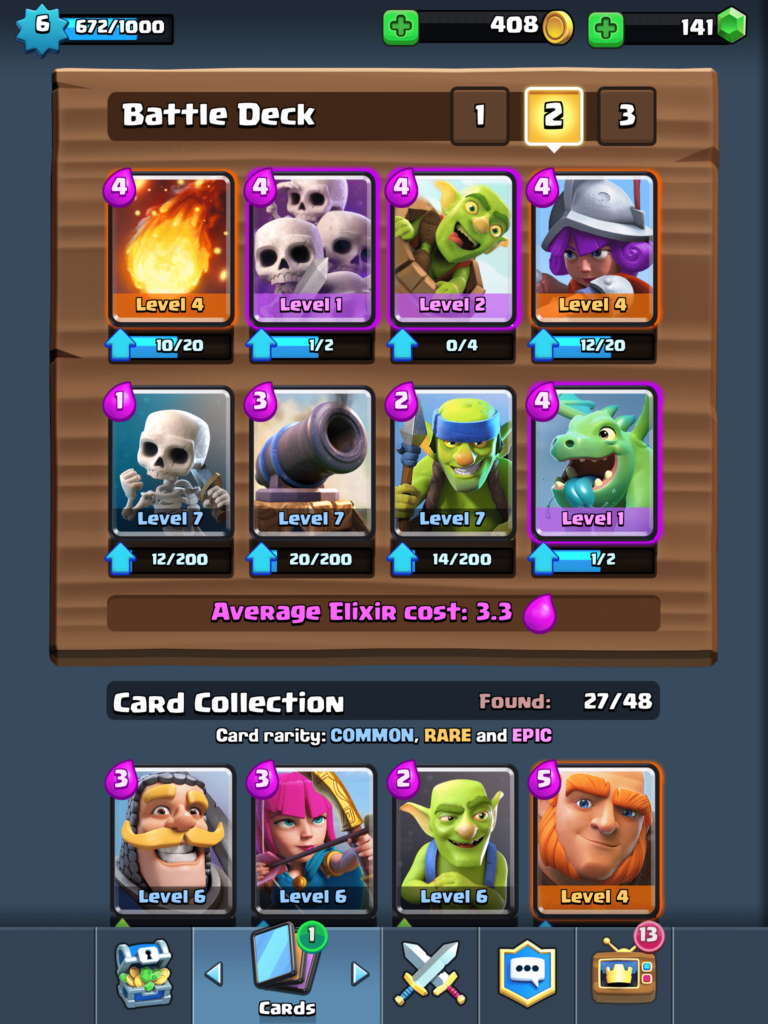 In your “deck” you have 8 card slots for valuable potential fighting machines. When you place a card down in a battle it deploys a real troop onto the field. The cards walk and move like real characters with high-quality animation! When a card reaches the range it has to attack it will start attacking using whatever speciality that card has. If a troop meets a troop from the opposing side they will start fighting until one dies. 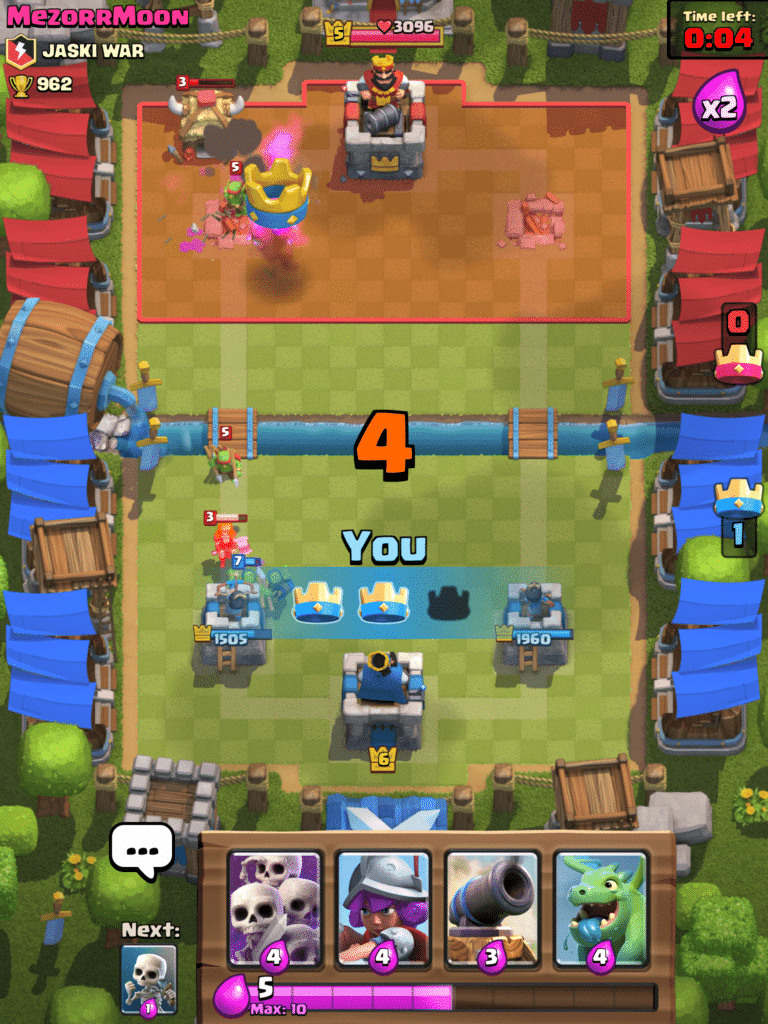 In a battle you can either Win, Lose, or Draw. To win a game, you must successfully destroy the king tower (optionally destroying the other towers on the way) to get 3 crowns or you can destroy one or two towers and have more crowns than the opponent when time ends.

To lose a game you’re opponent has to successfully destroy your king tower or have destroyed more towers than you before time runs out. For the battle to be a draw, both players have to end the game with 0 towers destroyed or the same number of towers destroyed after 3 minutes of the battle and a potential minute of overtime. 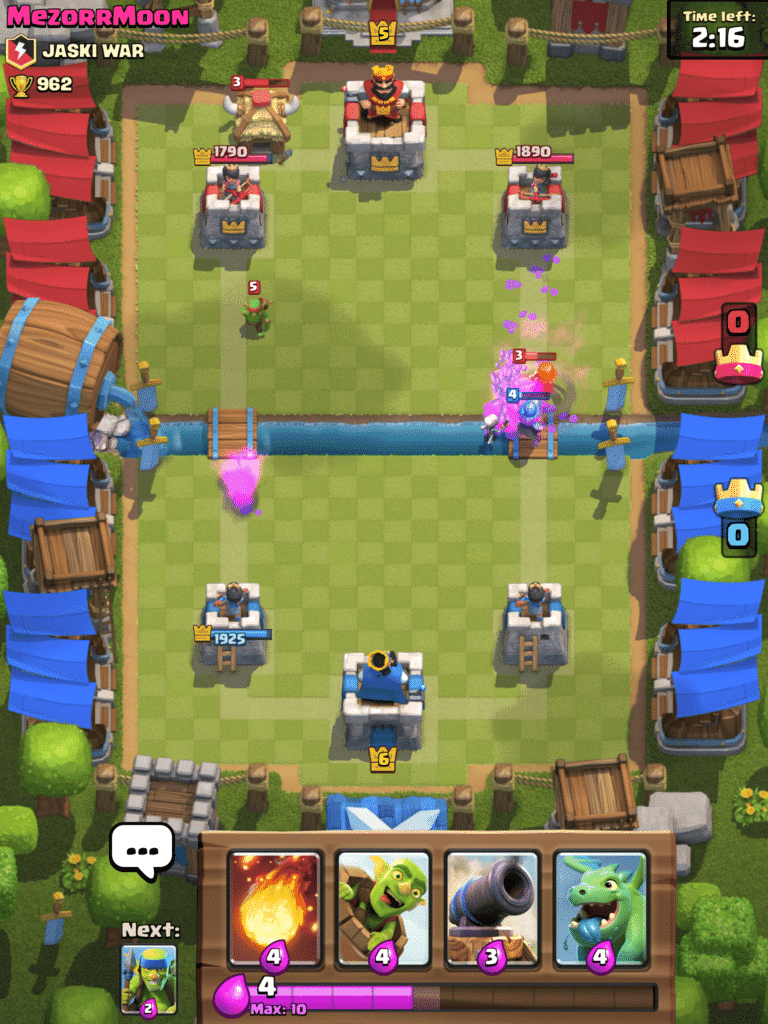 You can play strategically and defend while still attacking the enemy towers or just rush the enemy with many troops and destroy his towers quickly or fail the rush and have nothing to defend against his rush. This style of play is different than Clash of Clans because in Clash of Clans you have to have a well-made base to defend against enemy attacks but in Clash Royale you don’t have to make a defense. In a battle, you already have a “defense” and this can make the game a lot more fun. 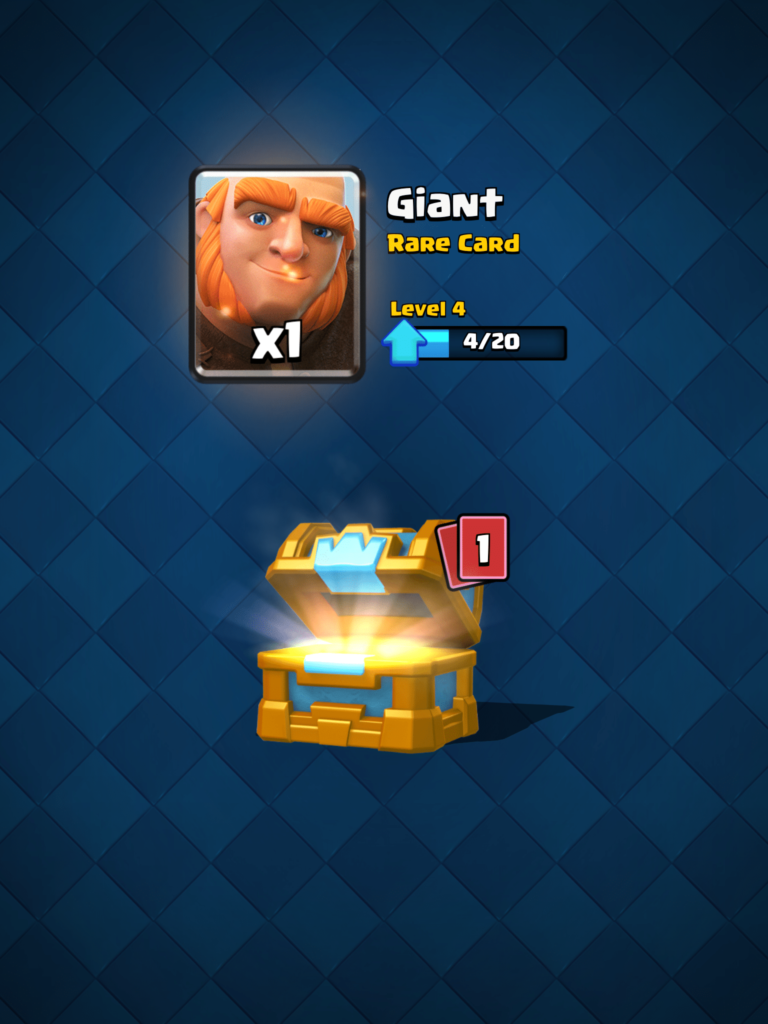 In the game there are also chests which you randomly get from winning a game. All the chests are: Free Chest, Wood Chest, Silver Chest, Crown Chest, Gold Chest, Magical Chest, Giant Chest and the Super Magical Chest. These chests randomly give you bad or good cards based on the chest you get.

To balance the game out there are 12 different levels and 8 different arena. In each arena you get a potential chance of getting new cards. You only battle people in your arena so they’re about the same level as you. Overall, this style of play is unique and fun and different, and I personally think is better than Clash of Clans. 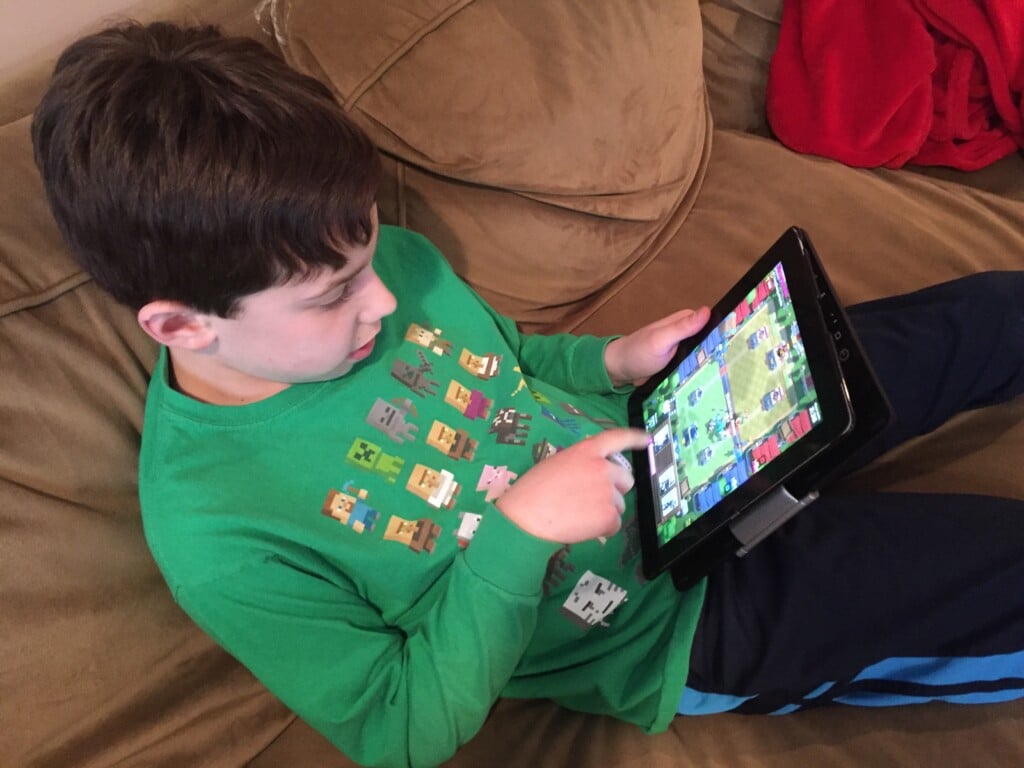 The Cards and what I like about the Game: 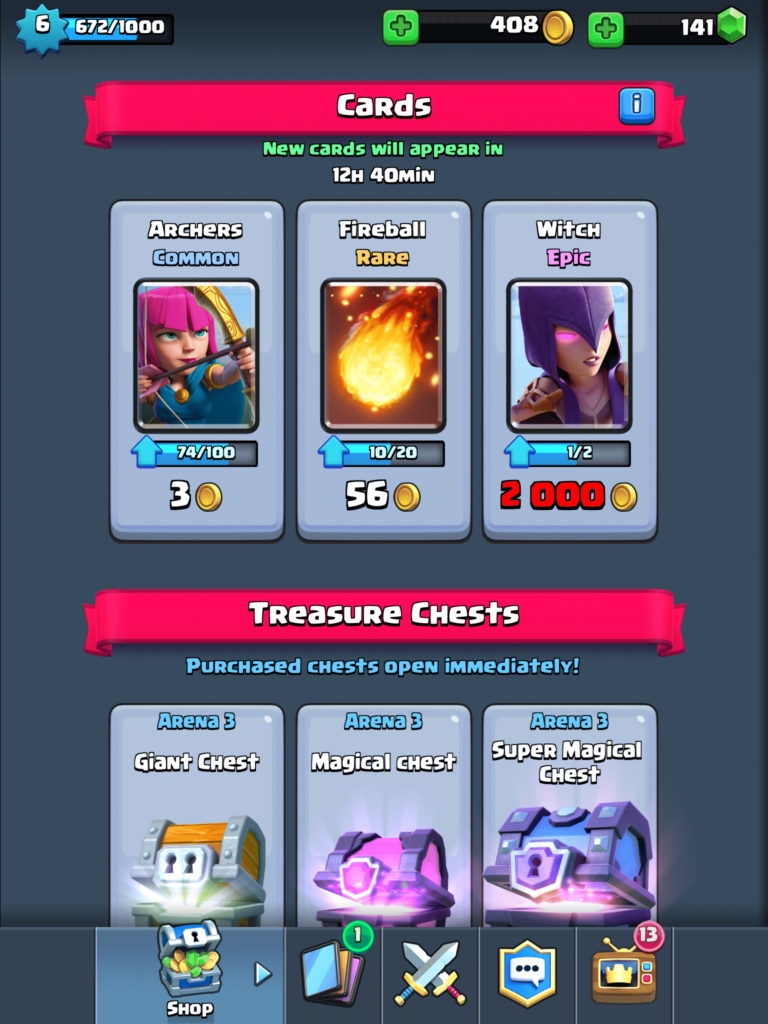 In Clash Royale, there are a variety of cards in the rarities of Common, Rare, Epic, and Legendary. Every card has health (Hit Points) and deals damage except certain cards in the game but I’ll let you explore all the cards.

I like EVERYTHING about this game: the cards, the battle, opening chests and clans. Yes there are even clans in the game and you can even friendly battle people in your own clan! 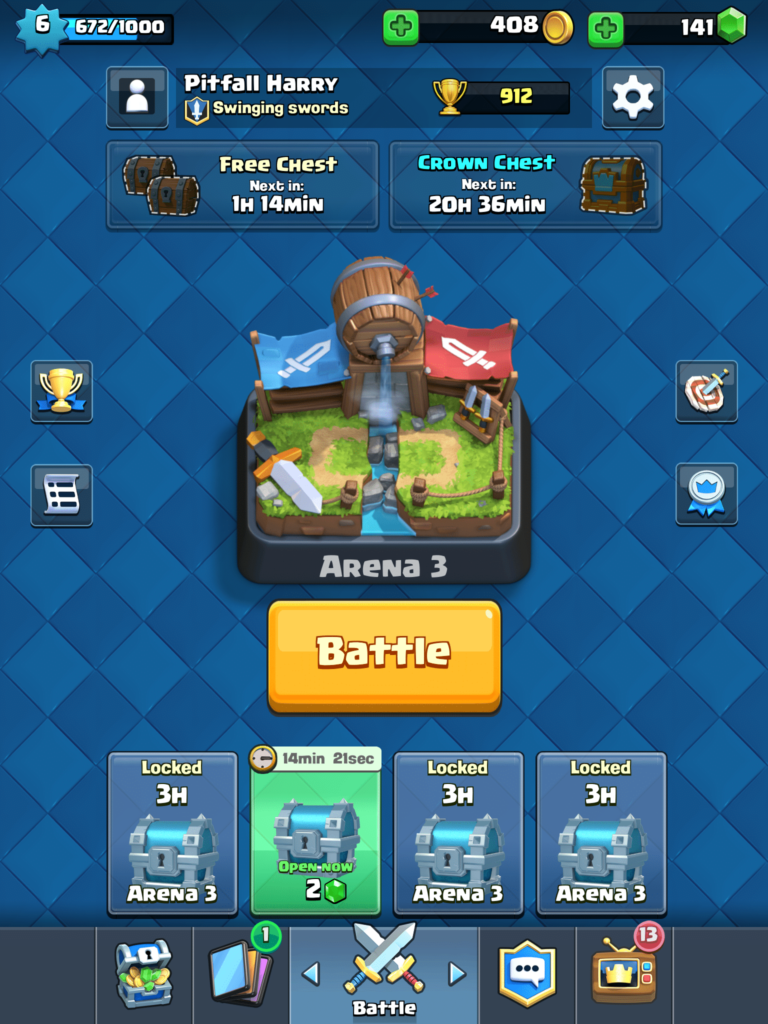 Clash Royale is a free, quick, easy fun-to play app which I highly, I mean HIGHLY suggest that you at least try. See you in a battle! 😉 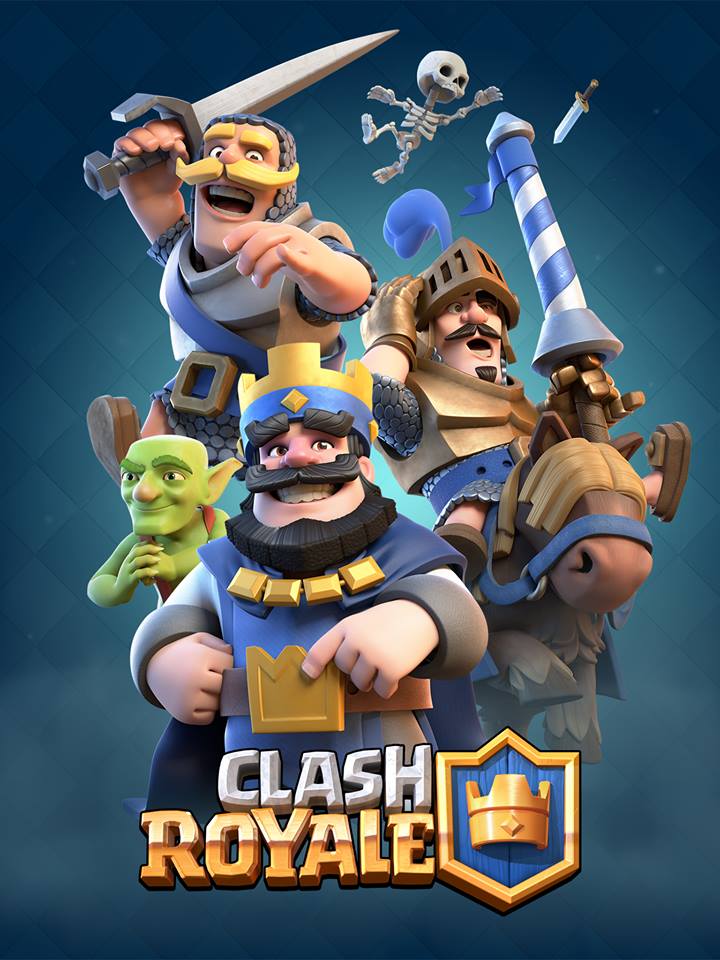