“This post is part of a social shopper marketing insight campaign with Pollinate Media Group® and Barilla®, but all my opinions are my own. #pmedia #OnePotPasta http://my-disclosur.es/OBsstV” 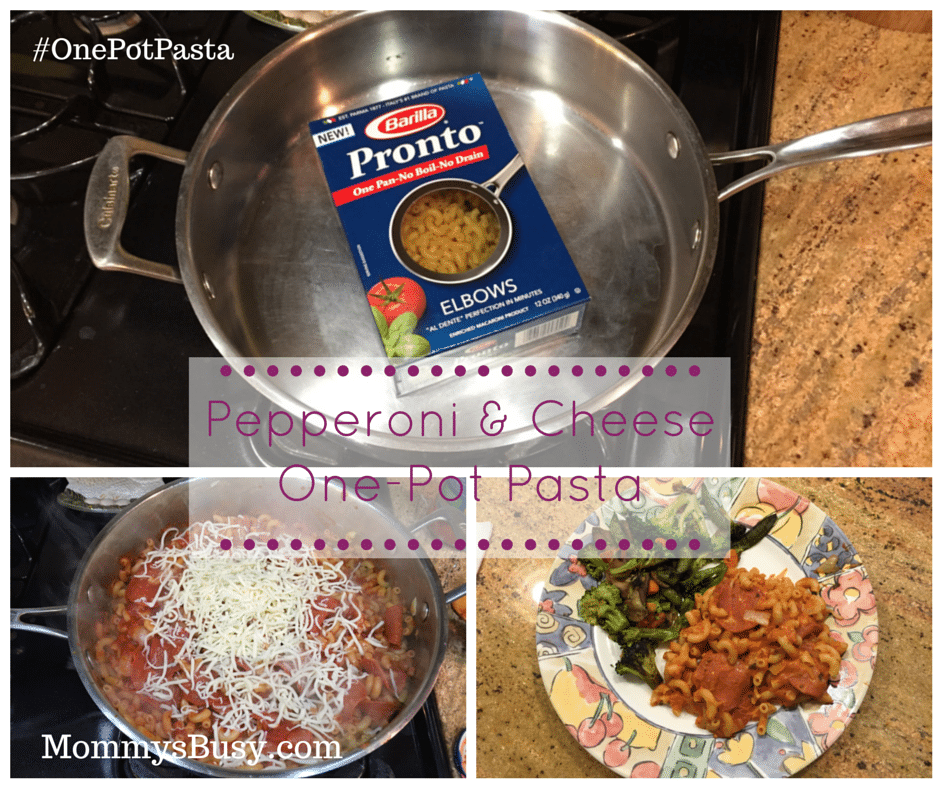 Believe it or not, I can’t cook rice. To be more specific, I’m no longer allowed to make rice.

Yeah, I’ve tried cooking rice (and other food too, beyond boiled water) in the past and for the most part, it’s ended in disaster. Thankfully, I’ve never burned the house down, though I did ruin a few pots, as well as plenty of bags and boxes of rice.

And before you even say it… yes, I’ve tried using a rice cooker and managed to screw even that up!

In the kitchen, I’m fairly hopeless. (On the flip side, I’m an expert at eating!)

The culinary geniuses over at Barilla Pasta must feel my pain. Maybe they haven’t experienced the kitchen shame that I’ve gone through, but they certainly know how tough it can be on parents looking to cook their family dinner on a limited budget (and limited time). I recently picked up a box of Barilla Pronto elbows at our local ShopRite and decided right then and there that I would succeed and earn my apron stripes!

The cool think about this new line of Barilla Pronto is that you can cook everything in just one pot. (Hence the catchy hashtag #OnePotPasta!) No need to even dirty up a pasta strainer!

Considering Allie’s second biggest complaint about me cooking (besides ruining the food) is that I somehow end up using 46 pots, 19 plates, 22 spoons and a plunger. Yeah, the kitchen is pretty much a condemned area when I’m done with it.

I’ve tried no-boil noodles in the past once or twice. Back in college I tried making a lasagna that way and well, I ended up needing to bake it for twice as long as you’re supposed to and it still turned out rock hard. So I certainly was a little skeptical this time around. But I was real anxious to try the Barilla Pronto elbows.

I also had purchased Barilla Marinara Sauce, but I wanted to do more than just a straight pasta and sauce dinner. After perusing the Barilla website for recipes, I found one that totally caught my eye: The Barilla Pronto Penne with Pepperoni & Cheese. I decided to modify things a bit, while still keeping it all simple.

We always have tons of turkey pepperoni in the house, as well as shredded mozzarella cheese. So I set out to cook the elbows, add in the sauce, garlic, onion, pepperoni and ultimately the cheese.

Grab your aprons and follow along as I attempt the unthinkable: cooking in my own kitchen! 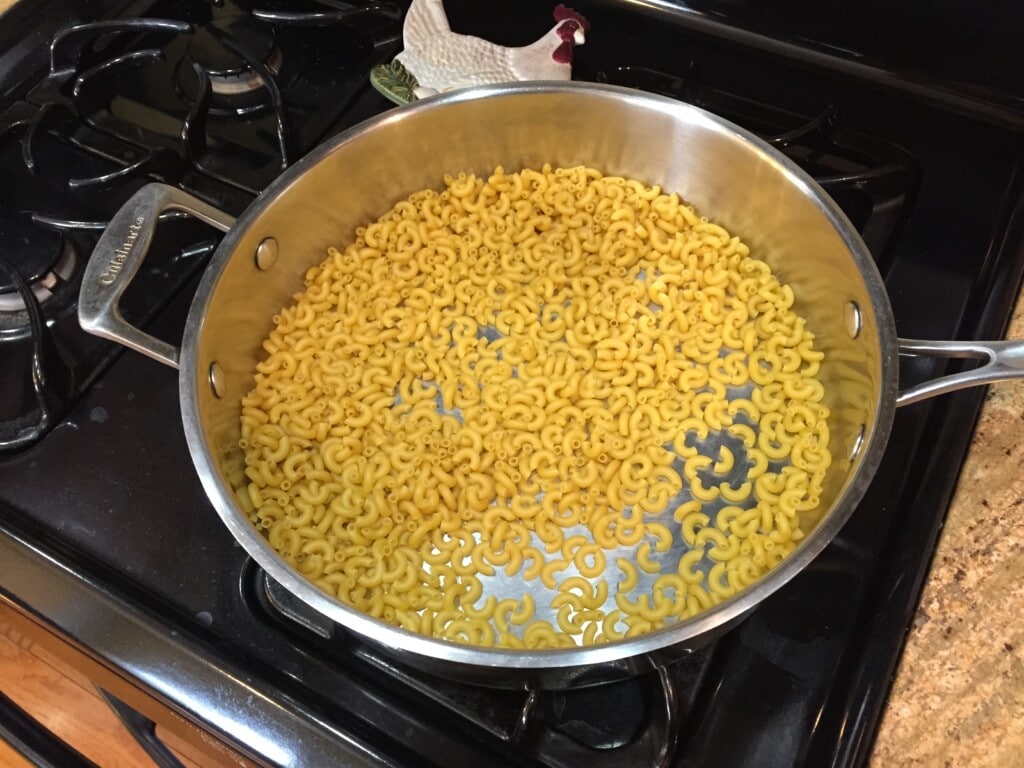 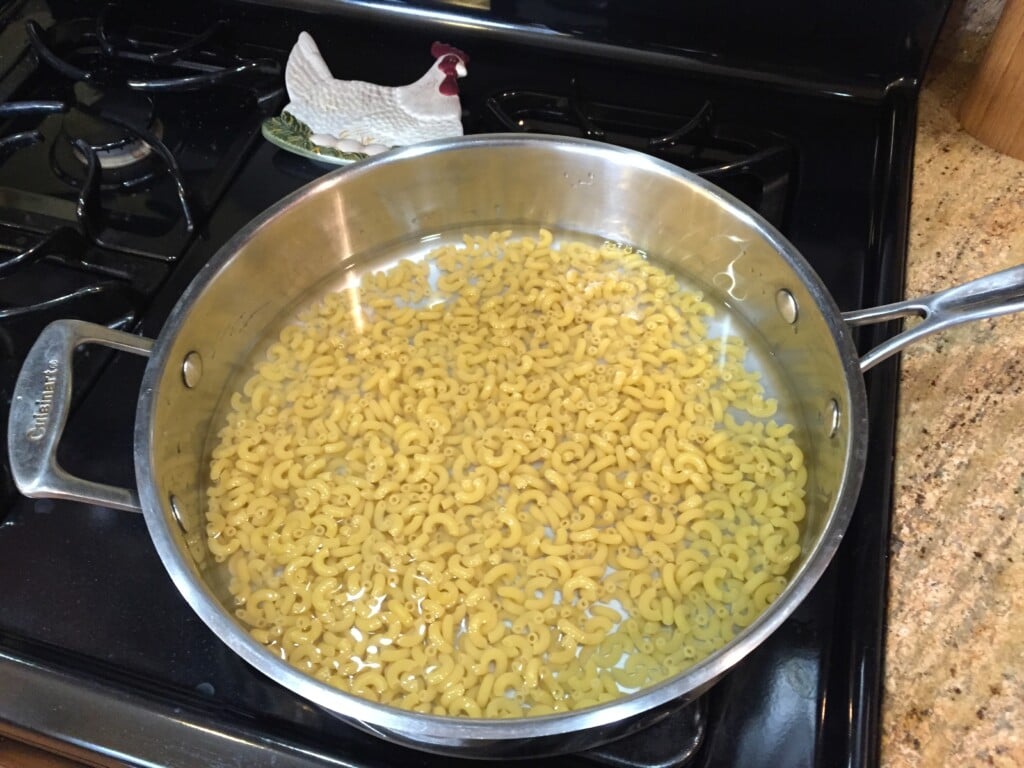 At that point, Minecraft was calling, so Ryan ran out of the kitchen. It was up to me to add 3 cups of cold water, covering all the pasta. I turned the flame to high and let it go for a good 10 minutes. 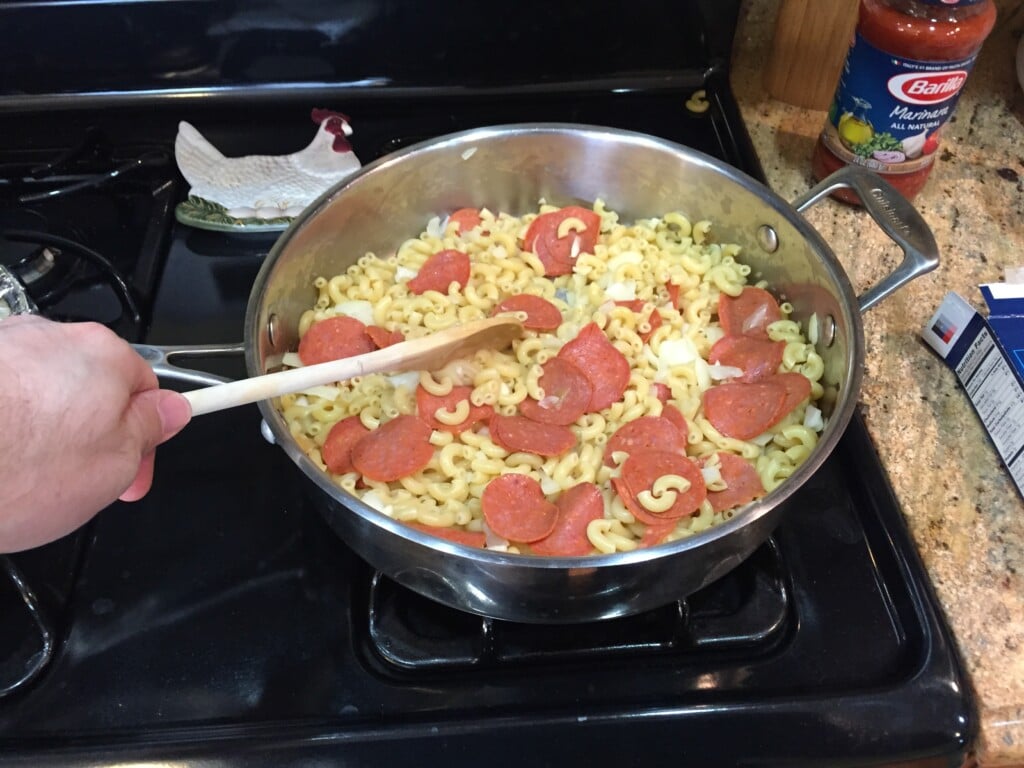 Next, I continued cooking until most of the liquid had evaporated. That only took a few more minutes actually. Then I added in diced onion, garlic and pepperoni slices, and let it all cook for a few minutes until the onions became translucent. I gave the occasional stir too, just to feel like a real chef. 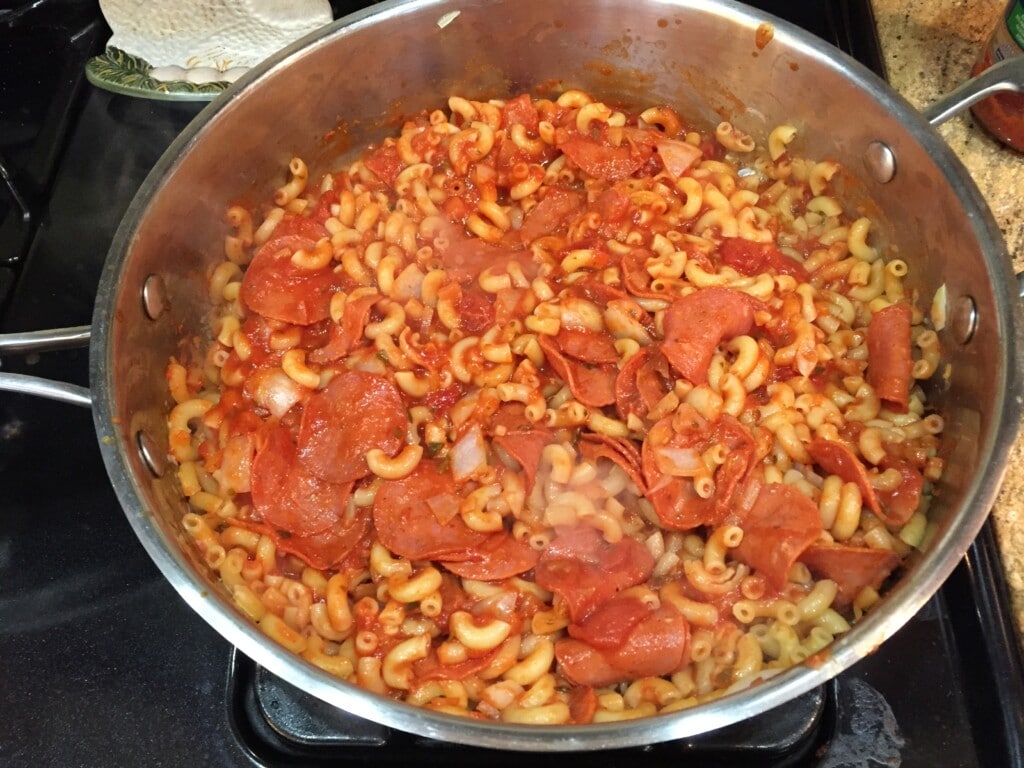 Just about done now, so I poured in an entire bottle of Barilla Marinara sauce to heat through. Again, just a few minutes. 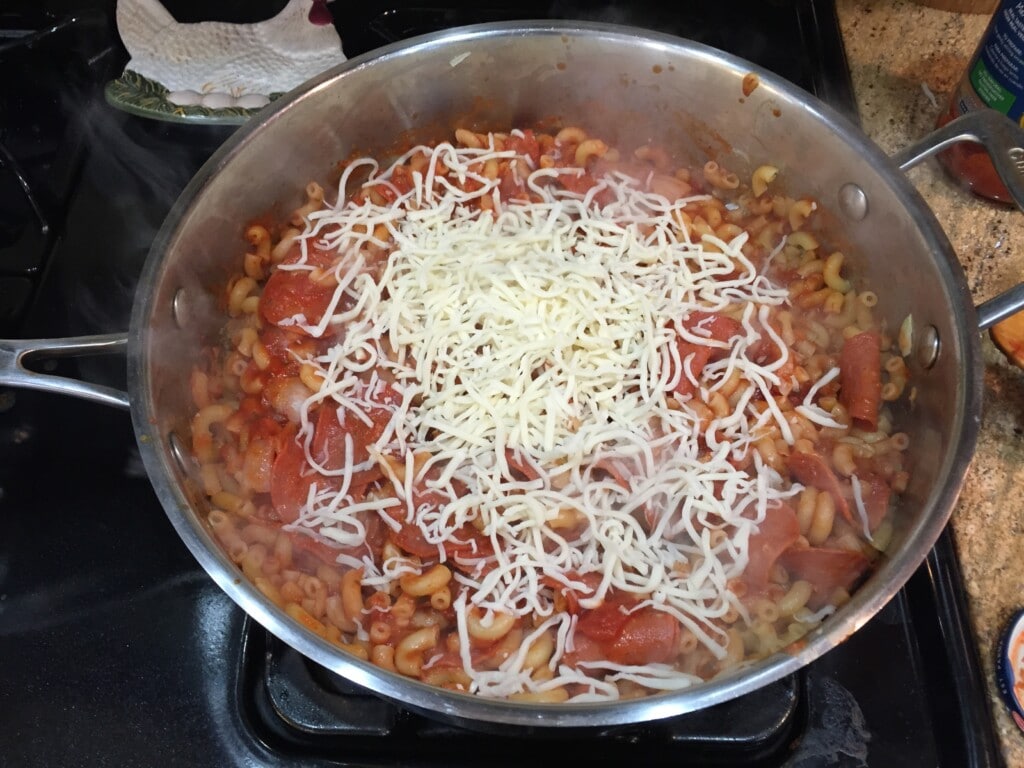 For the final step, I turned off the burner, sprinkled shredded mozzarella throughout, and stirred to melt it all together.

A dash of Oregano and my one-pot meal is complete! 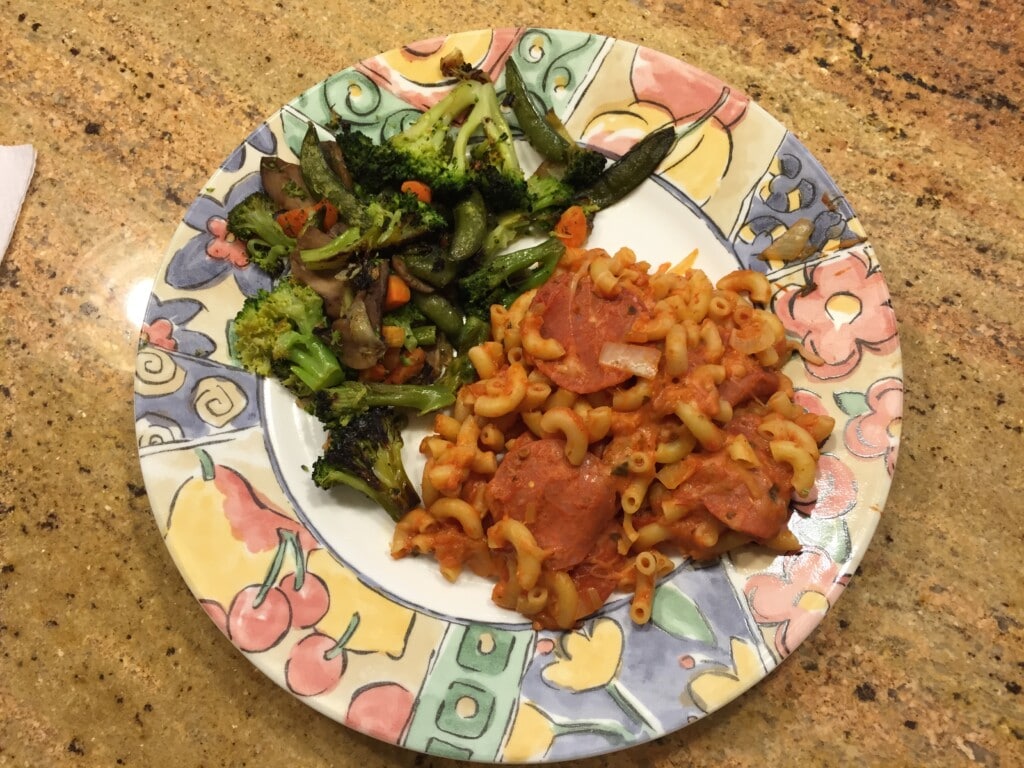 Pretty easy if I say so myself. It took only about 20 minutes total to make this dinner and I used only one pot throughout! But the big question is… how did it taste? 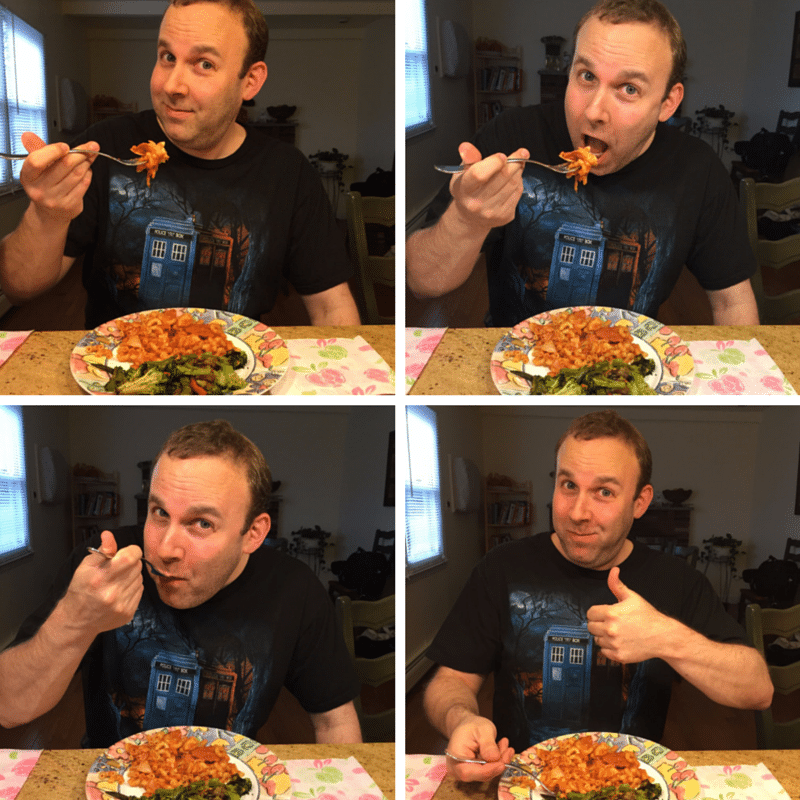 I’d say it turned out good enough to eat! Which is good, because you’re supposed to eat it, right? (It actually came out great, btw. Pasta was perfect-o!)

So thanks to Barilla Pasta, this previously shunned chef can now actually cook in his own kitchen! Now to just make sure my wife doesn’t get too used to this.

Interested in trying Barilla Pronto yourself? Then take advantage of this great in-store offer (No Coupon Needed): Buy any FOUR (4) Barilla® Pronto™ pasta products for $5.00 or $1.25 each available until 5/16/15 while supplies last.