This shop is part of a social shopper marketing insight campaign with Weave Made Media® and Klondike, but all my opinions are my own. #weavemade #KandyBar #ad http://my-disclosur.es/RgFrEH

We’ve been in our new house about a year now. And like most houses (especially ones that were built decades ago), it needs some work. We knew that moving in. But regardless of how much foresight you have, there’s always the unexpected waiting to slap you in the face. 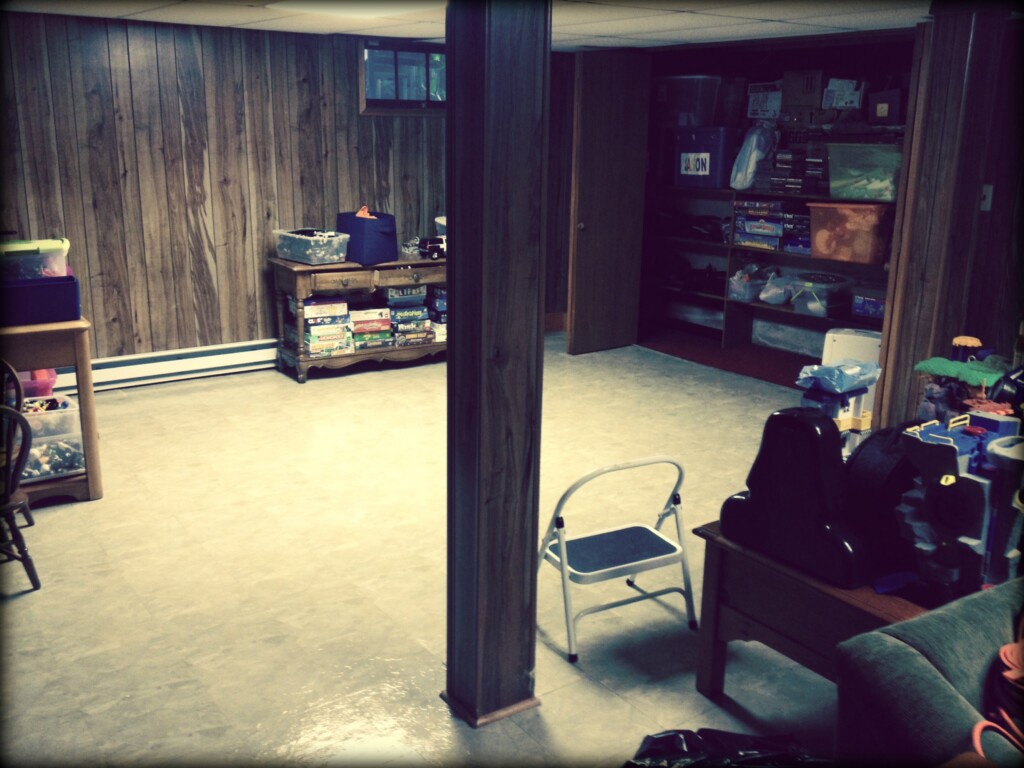 See that photo above? Yeah, that’s our basement. Well, just a part of it, the part mainly where the kids play with their toys. You’ll notice that it’s actually pretty neat. And pretty empty. Hit “rewind” for about three weeks, however, and you’d see a very different picture. One with a slew of toys, games, stuffed animals, you name it, fighting for space on the floor.

So where’d they all go? Did they pull a Toy Story 3 and sneak out the basement window? Uh uh. After a serious flash flood the night before, we had our first serious basement flood. I had gone downstairs to play some Mario Kart 8 with the boys and discovered a pretty big pile of water in the middle of the room.

My first instinct was that the kids spilled a bottle of water. The second was that a pipe burst and was leaking, so I looked up only to see a dry ceiling. I screamed for Allie to come down and there was water all over the floor, mainly pooling in two very different areas of the floor.

We spent hours basically tossing towels down and then tossing out any damaged toys. In the end, we filled up roughly 10 big black garbage bags full of water-damaged items, and a few small pieces of furniture. It was a long day. A frustrating day. And one we knew would end up costing us a pretty penny since we’d obviously need to at least put in a Sump Pump, and potentially some French Drains.

While I wish such a thing as a Do-Over Button existed in life, it doesn’t. So instead, when we finished, we went upstairs and gave ourselves a very much needed reward.

It really doesn’t matter what age you are. I’m of the belief that “ice cream can make anything better.”

Luckily, I had just bought a box of Klondike Kandy Bars and couldn’t think of a better time in the world to give them a try. I picked the Klondike Kandy Bar Cookies & Cream flavor because that’s one of my favorite ice cream flavors. Unfortunately, I quickly learned that the box itself is not very edible.

But if you open the box, you’ll find four individually wrapped Kandy Bars, just waiting to be devoured. I was just a tad bit excited at this point.

If you’ve had a regular Klondike before (and if you haven’t, well, what’s wrong with you?), then you have an idea how awesome they are.

These new Klondike Kandy Bars are similar except they’re rectangular in shape, and have a Cookies & Cream coating on the outside, and a mix of Cookies & Cream (heavy on the cookies!) ice cream inside.

Here, come join me for a bite.

With no idea what to expect, I chomped down and let the cold Klondike Kandy Bar work its way to my taste buds. My initial reaction? Yum. These are pretty darn good.

So I took a second bite. And that’s, well, that’s when the world completely melted away. My water-logged basement could’ve been an indoor swimming pool at that point. I had reached Ice Cream Nirvana and it was called “Klondike.”

Now, I shouldn’t bother telling you to go buy these at your local store because that’d mean there’s less available for me. But my mom did raise me right so sharing is just part of my nature.

Klondike Kandy Bars currently come in three different varieties: Fudge Crunch, Caramel and Peanuts, and Cookies & Cream. You’ll find them in the freezer section at most National retailers, such as Walmart, Target and Safeway brand stores. Here’s to rough days ahead, so you can enjoy your tasty rewards!