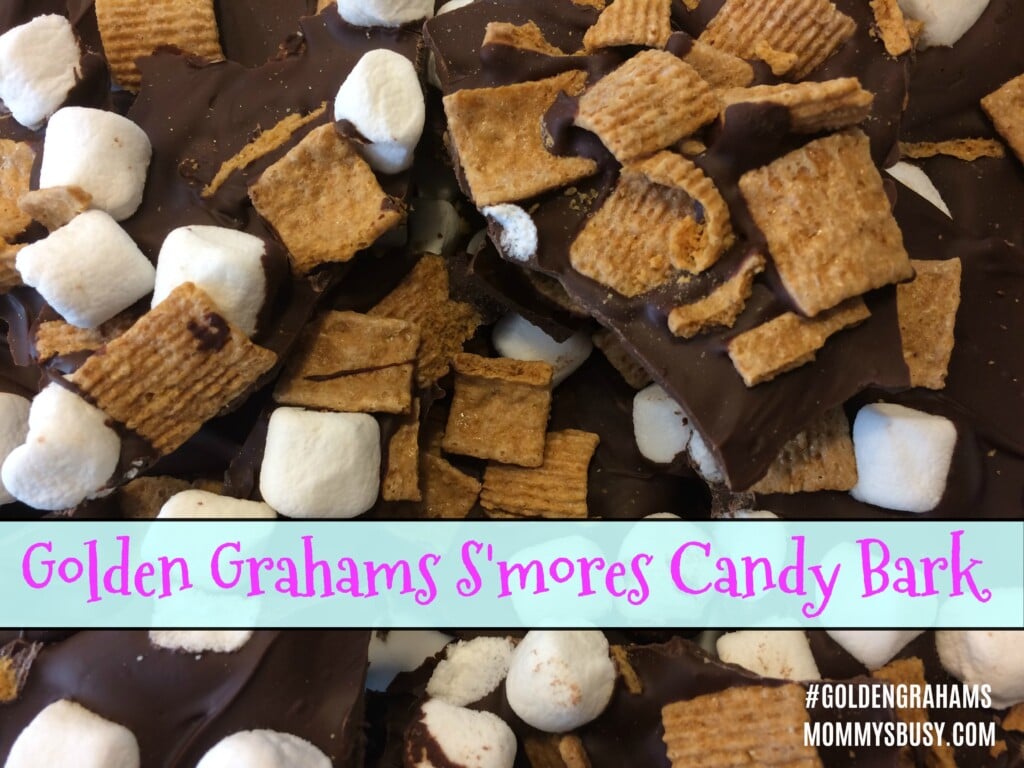 Funny thing. I’m so not a fan of graham crackers. S’mores? Yes. Regular Graham Crackers, no. However, I make some serious exceptions when you’re merely talking about Golden Grahams cereal.

Anyone from my generation (read: old) definitely remembers cartoons only being on TV on Saturday mornings. Those were the true Glory Days. I’d grab my bowl of Golden Grahams, add milk and a spoon and plop myself down on the floor of the den, while my sister and I hung out with the Smurfs, Spider-Man, Hulk, Gummi Bears and the rest of our weekend friends. 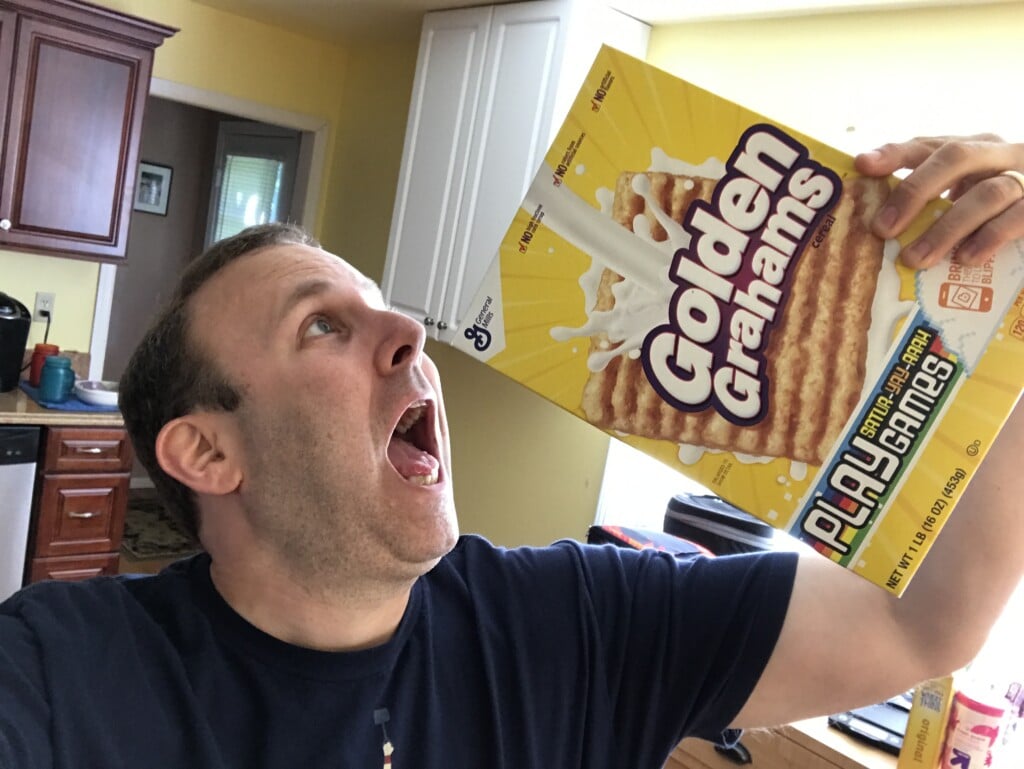 I don’t think I’ve actually had Golden Grahams for… geez… probably a decade or two. With Father’s Day fast approaching, I figured now’s the perfect time to grab myself a box, right? I mean what kind of father would I be if I never introduced my kids to that sweet, honey taste in crispy little bite-size squares?

So I bought some. As simple as that. 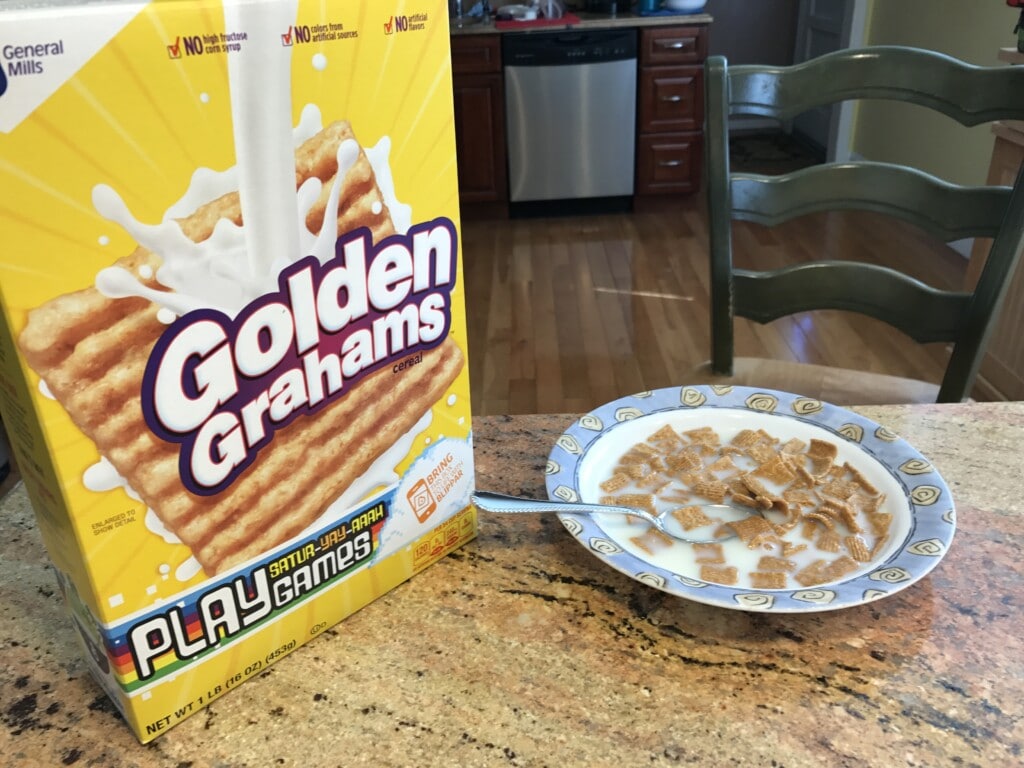 …. suddenly I was transformed into a kid again, watching cartoons on the boob tube without a care in the world. But I couldn’t just enjoy this bad boy alone. Uh uh. It was time for this dad to do that whole teaching thing.

I grabbed a bowl of Golden Grahams for Jason and Ryan, popped on my old Dungeons & Dragons DVD set and we all started losing ourselves in cereal and cartoons. 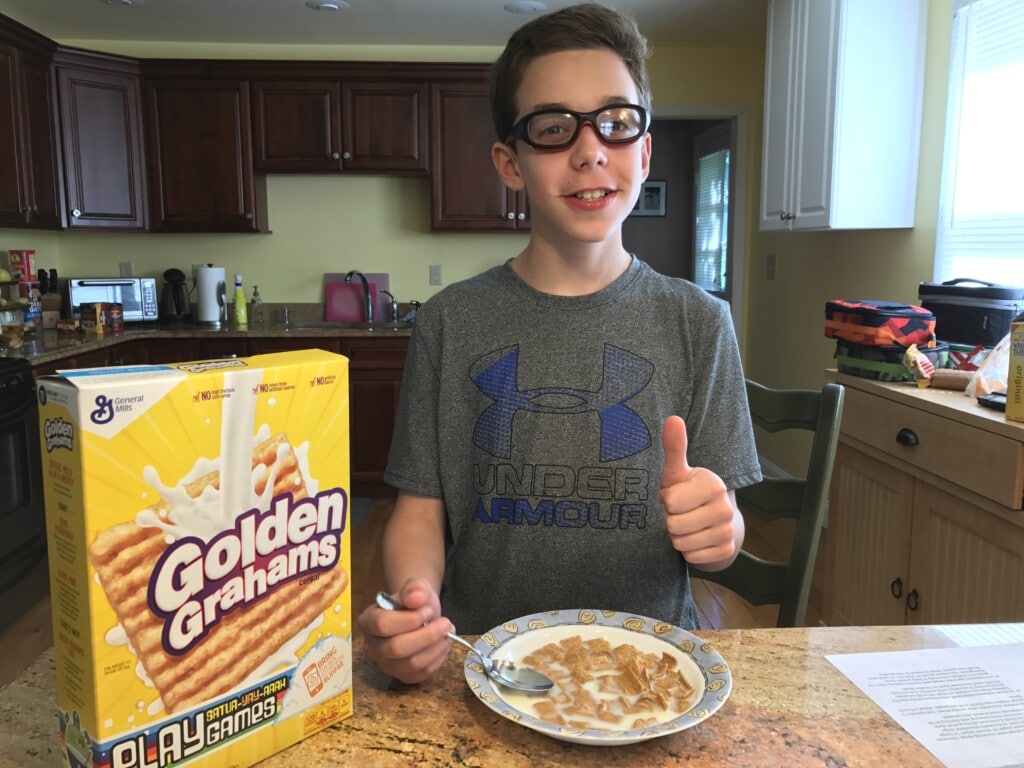 Then I decided to step things up. Golden Grahams are fantastic in milk. They’re amazing as just a snack right out of the box. But apparently there are also loads of mouth-watering recipes too.

There are Blueberry-Lemon Cheesecake Bars. 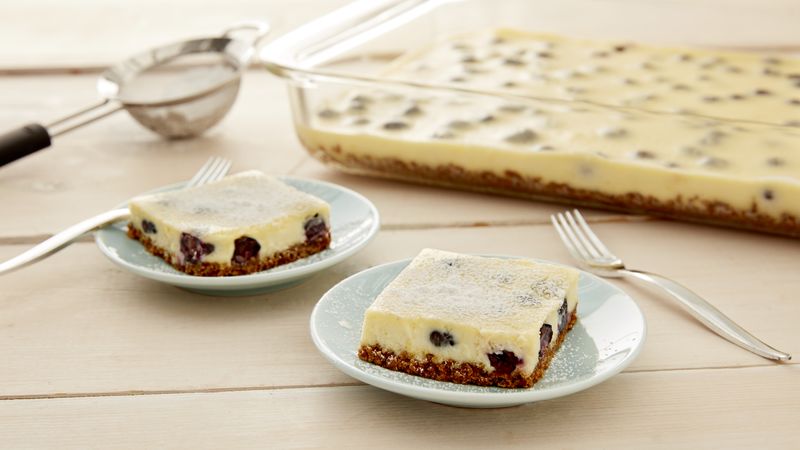 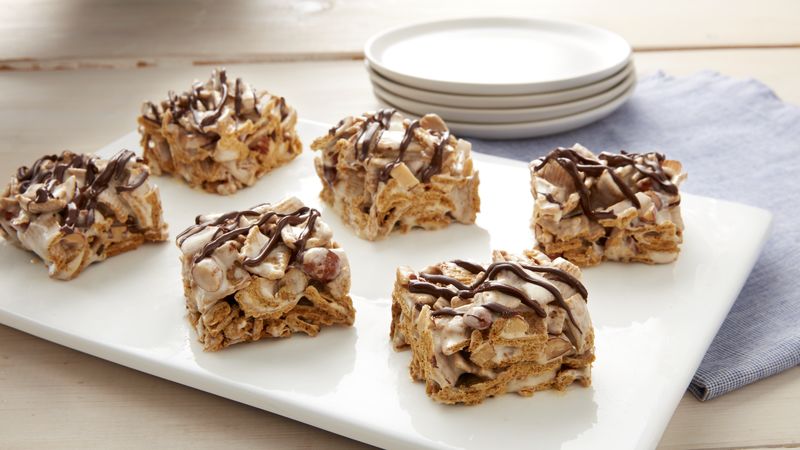 Maybe you’re up for a bunch of Golden Grahams S’mores Ice Cream Bars instead? 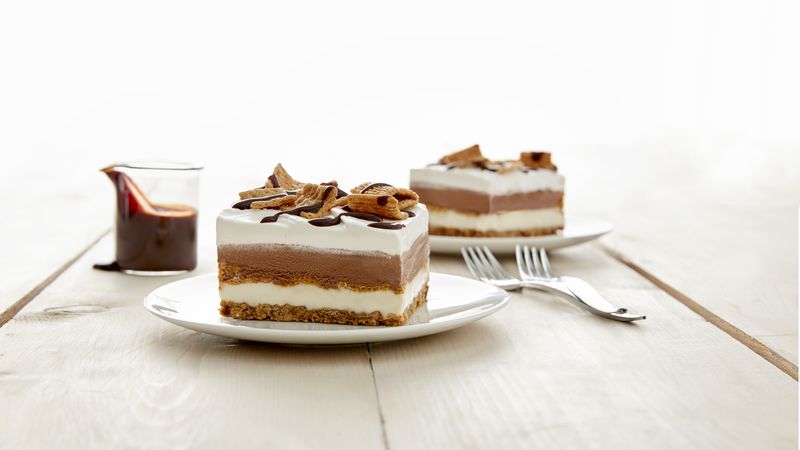 Those all sound good, but my money’s on the Golden Grahams S’mores Candy Bark. Seriously, how insane does this look?!? 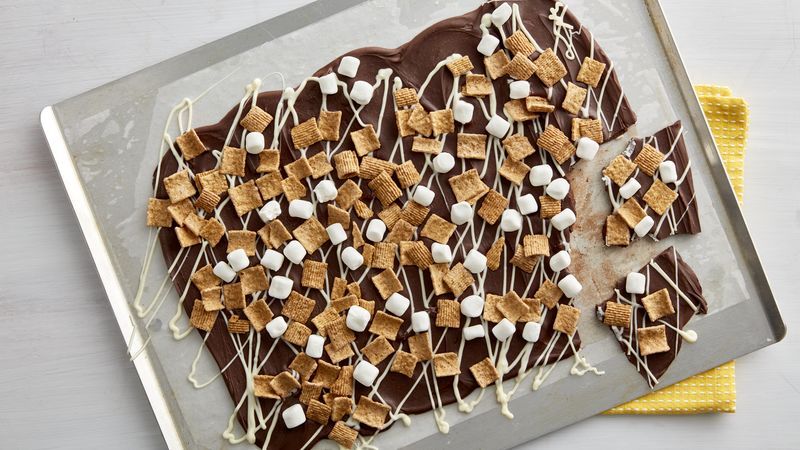 Not only did I decide to make these, I thought it’d be a fun Father’s Day activity for me and the boys. So we gathered the ingredients and followed the recipe closely. Considering there’s no stove involved, just a microwave, I figured there couldn’t be a more perfect recipe for dads to handle.

So I waited until Allie was out of the house, and the boys and I dove into some heavy-duty baking! 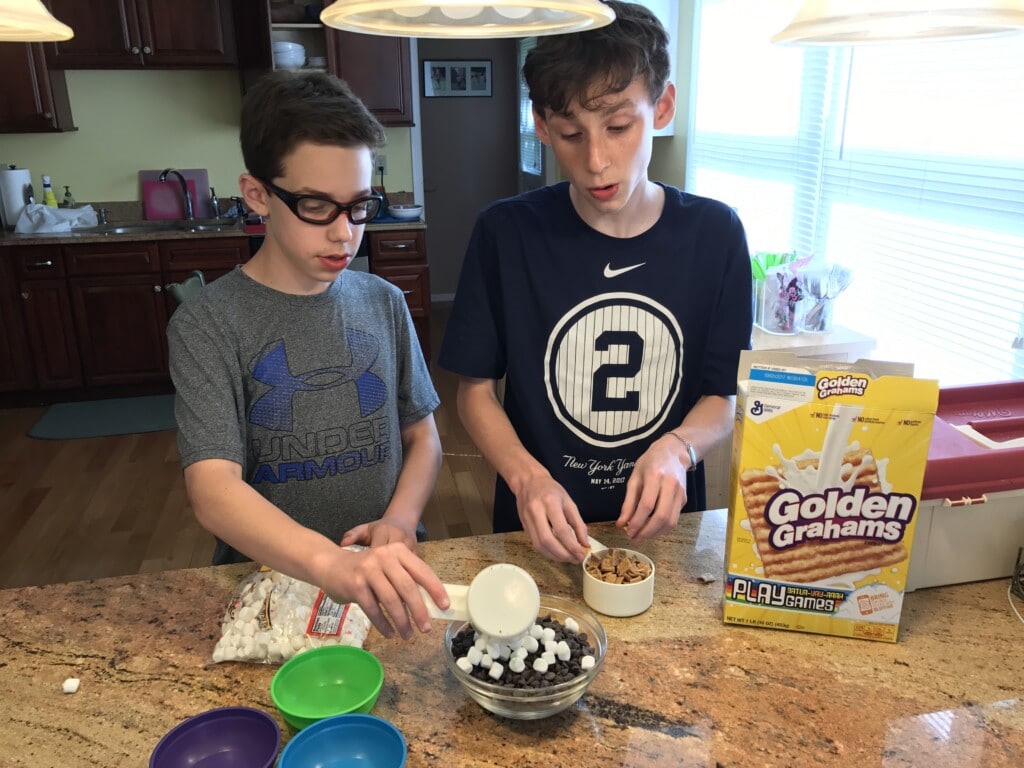 There was pouring and measuring and spilling. Lots and lots of spilling. Okay, fine. The few dozen chocolate chips that spilled all over the floor was totally my fault. There, you happy now? 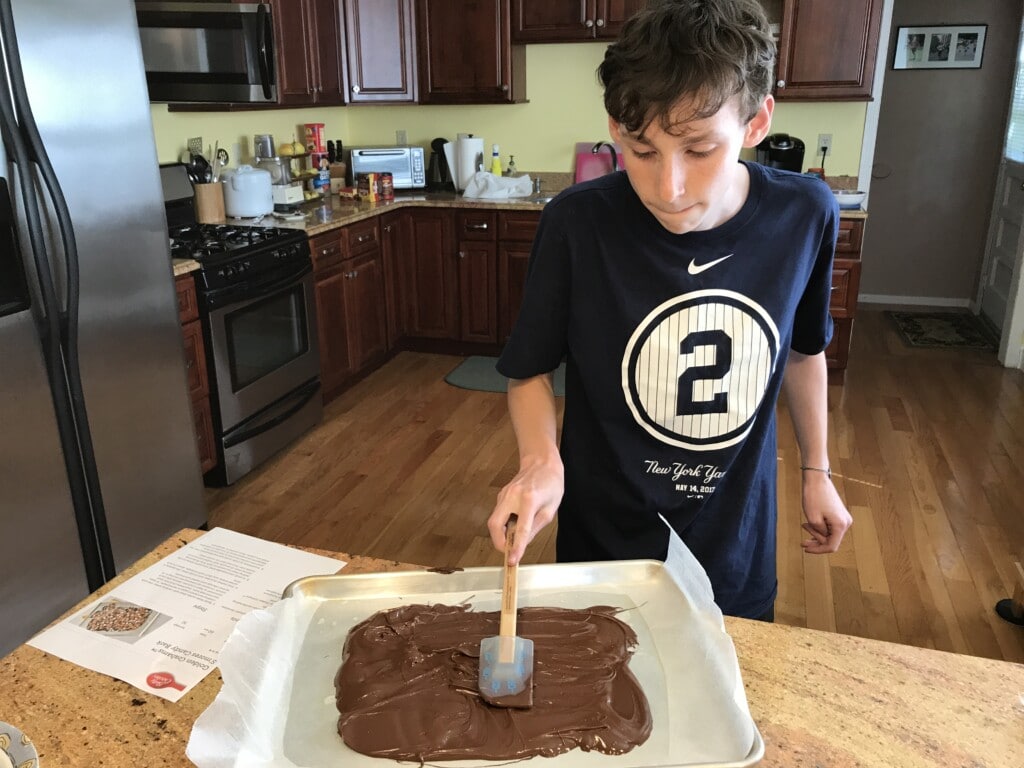 After melting chocolate in the microwave, Jason learned the fine art of chocolate painting! Either that or he’s spreading out the melted chips to start the base of the Candy Bark. 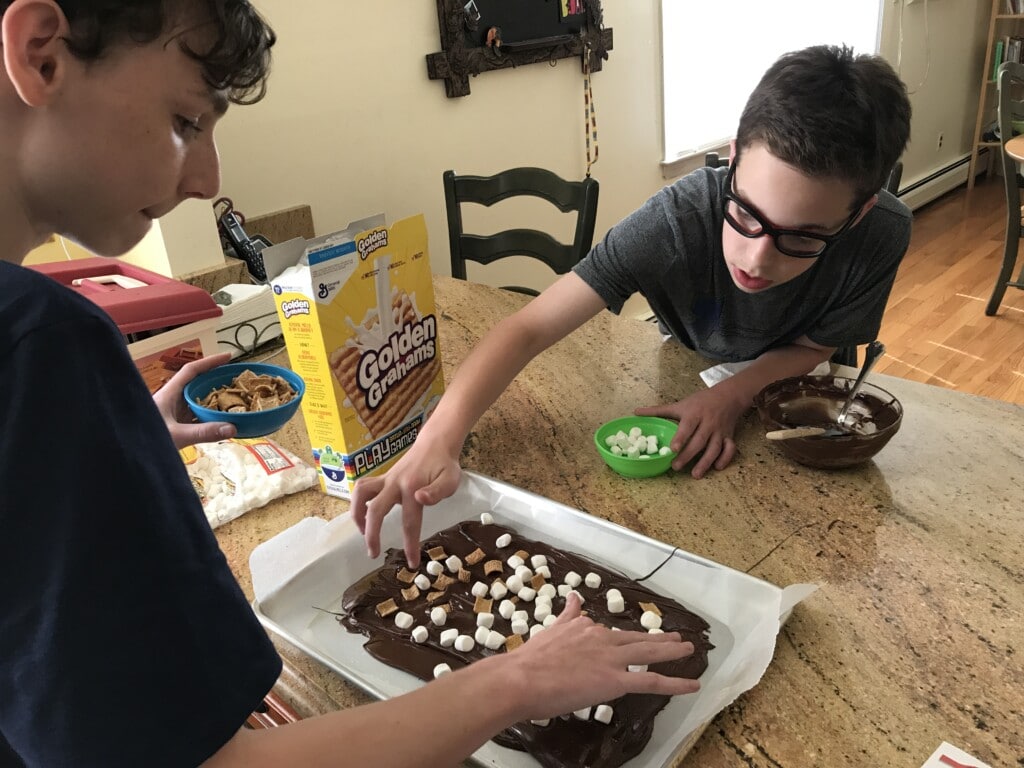 Now that’s teamwork! Two brothers getting their hands dirty with chocolate, all for the greater good. 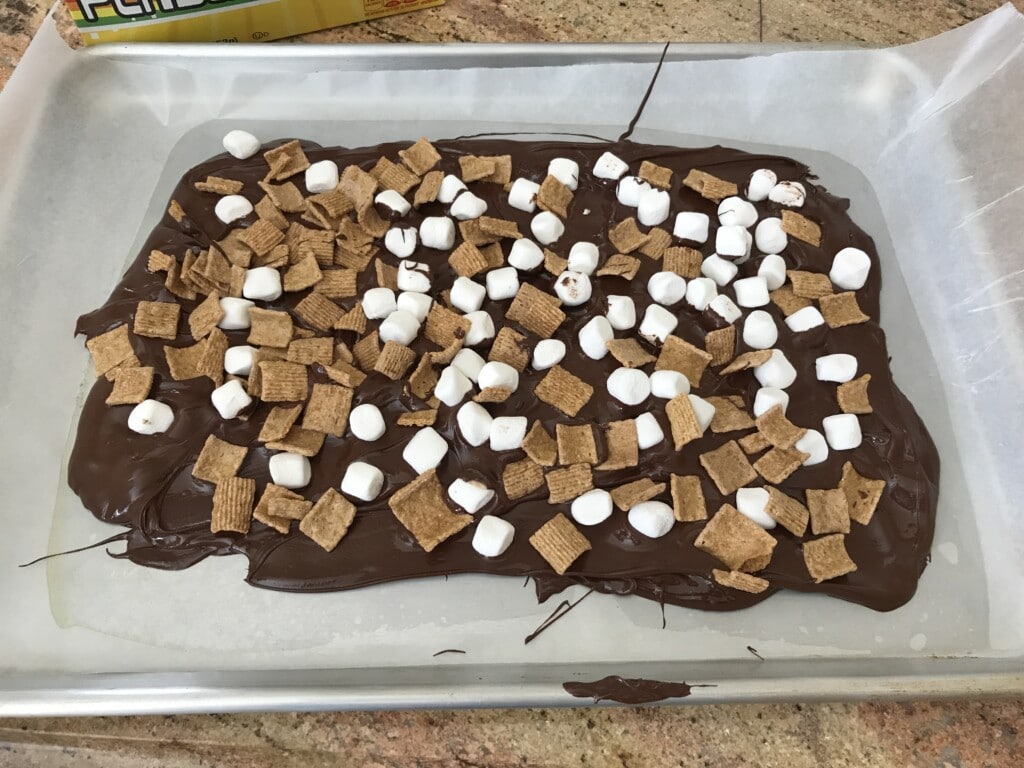 The finished product came out pretty darn good, if I do say so myself! 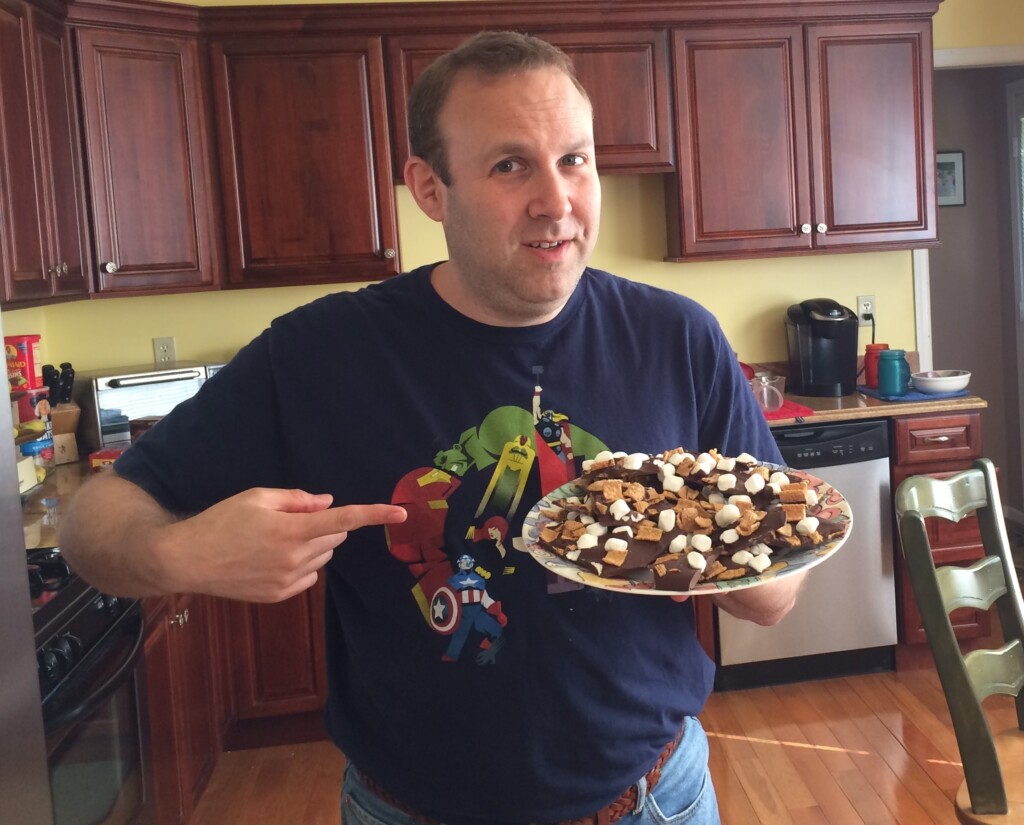 The second easiest part of this recipe was breaking the bark into pretty much any shape or size I could imagine. The #1 easiest part? 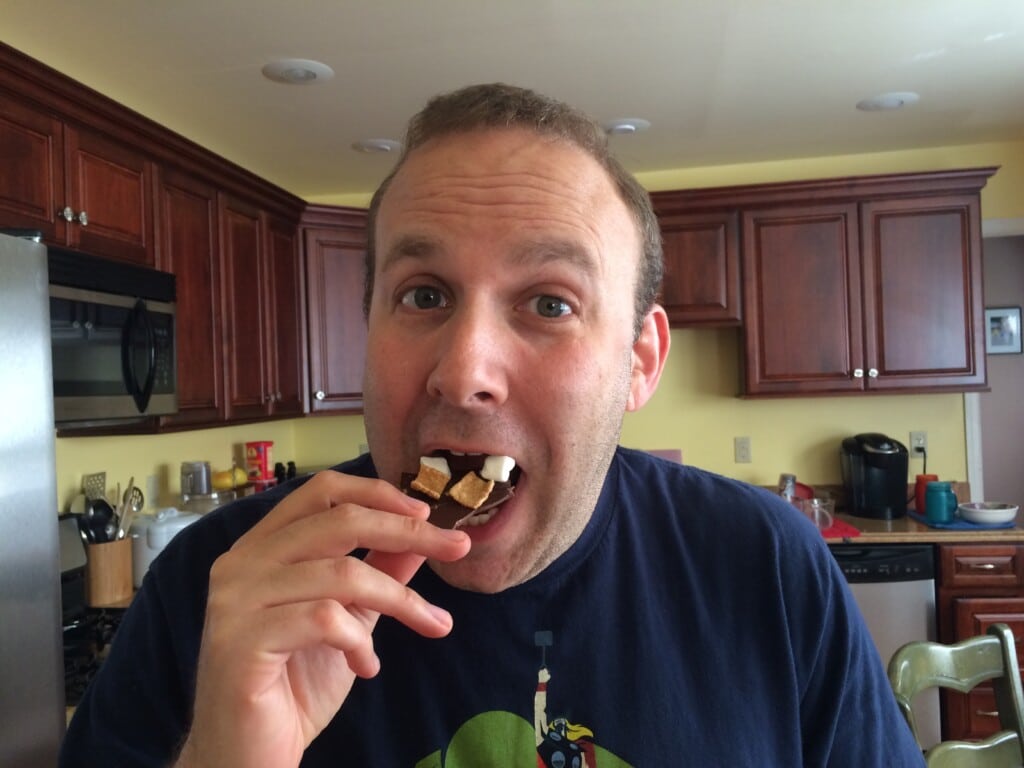 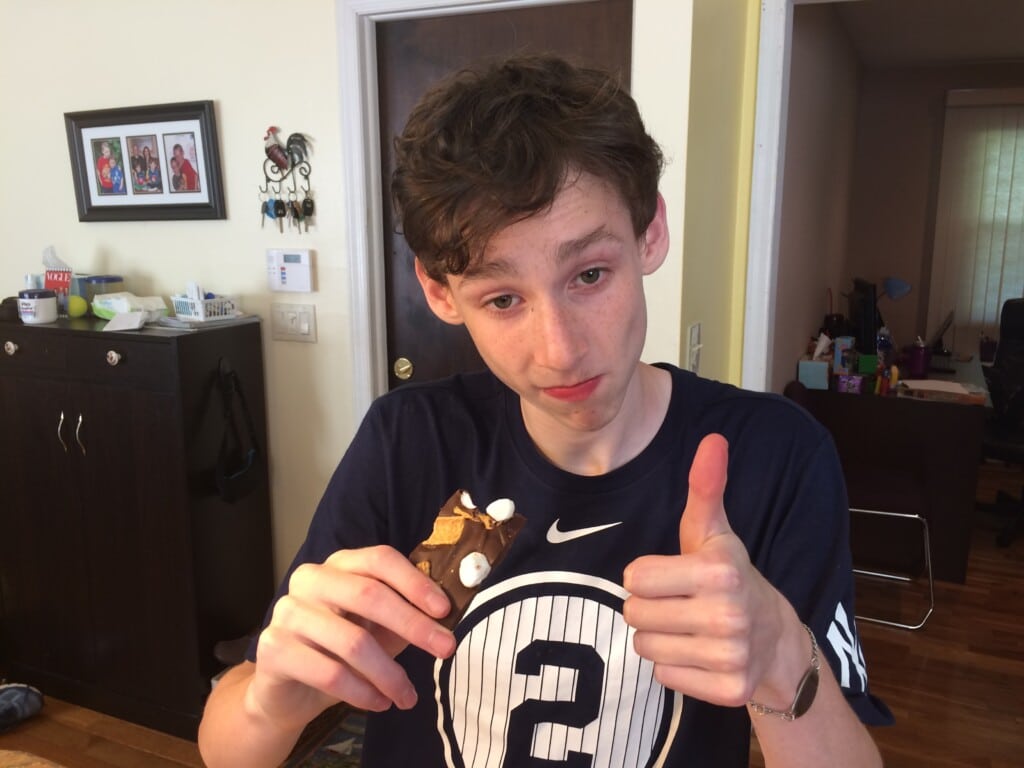 Jason chomped down and gives them a big thumbs up! 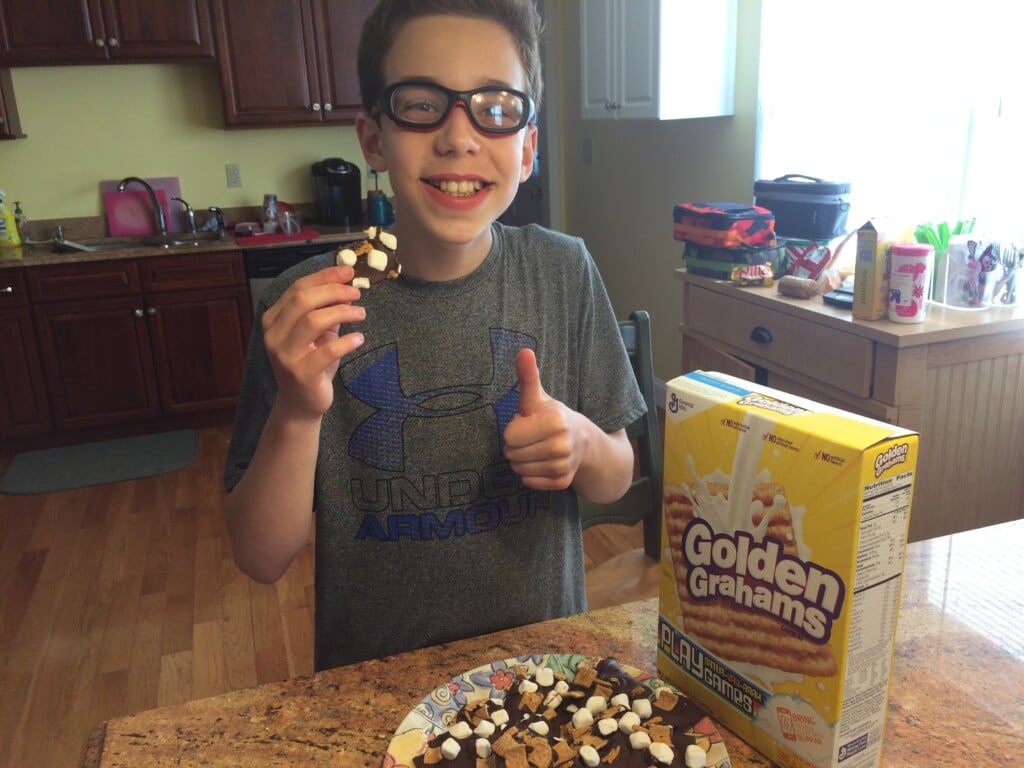 Ryan definitely agrees and I had to even stop him from having thirds! I may be a cool dad, but even I can’t let him eat just Golden Grahams S’mores Candy Bark for dinner. I mean, I’ll force him to at least add a carrot or two for some veggies! 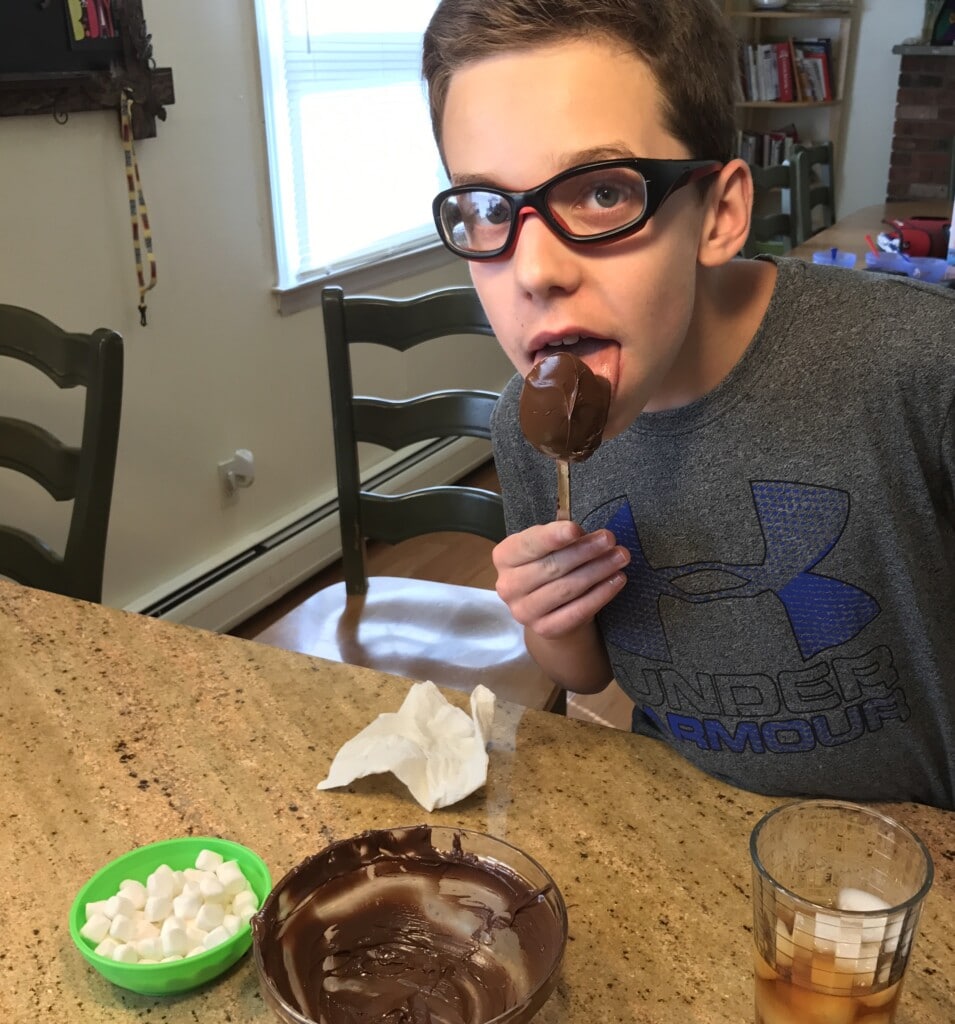 We had a blast making these treats and who doesn’t love cleaning up when it involves licking a bowl of chocolate?

If you’re looking for a fun Father’s Day activity to do with your kids, any of these Golden Grahams recipes will fit the bill. Though I can personally attest to how easy the Golden Grahams S’mores Candy Bark are to make. In fact, even adults can try whipping these up with their dads. It’s all about family bonding and that sweet delicious crunch. 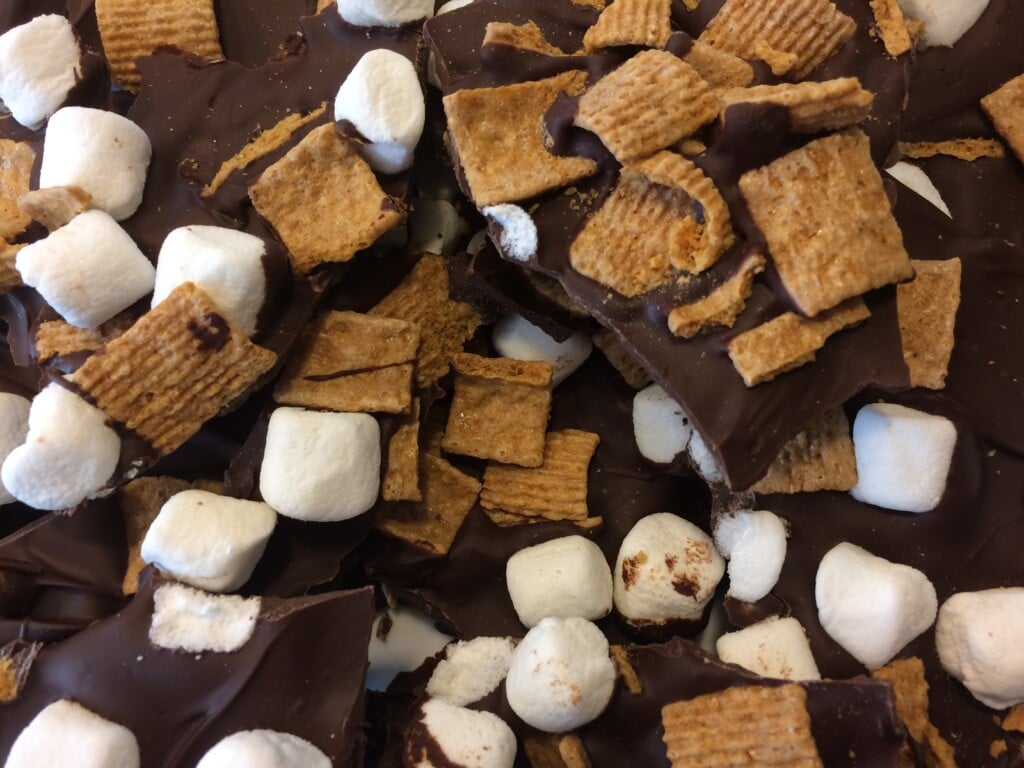 What are your favorite Golden Grahams Memories from Childhood?
#GoldenGrahams