This post is sponsored by Grand Central Publishing. All thoughts and opinions expressed in this post are my own and were not influenced by the company. 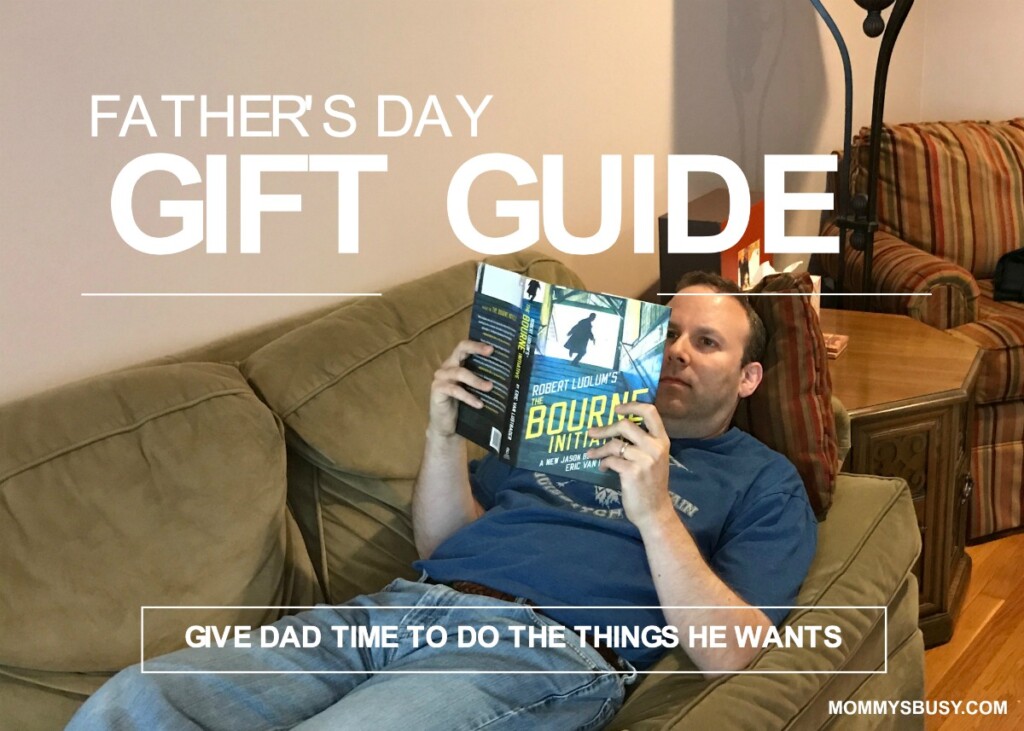 I became a father when Jason was born (see what I did there? Jason Bourne fans will appreciate that!) more than 14 years ago. To say I had no idea what was coming next would be an understatement. No matter how many books you read, conversations you have or classes you take, there is nothing in the world to fully prepare you for what it’s like to be a father.

You also have zero idea how much love for this little guy you’re going to have in your heart. I can tell you until I’m blue in the face what it feels like, but until you have a kid of your own, it’s just words. And even more shocking… once you have a second child, things don’t change. It seems like your heart is about to burst with love for your first born so how on earth will there be room for even more love the second time around?

Well, I have a secret for ya. That organ called the heart is a lot like Doctor Who’s TARDIS – it’s much bigger on the inside. Because once Ryan was born a few years later, I somehow managed to find just as much love for him as I did for Jason. It’s really amazing all around.

With Father’s Day upon us once again, I thought it’d be neat to put together a sort of Gift Guide to help spark some creativity out there. Trust me, no dad wants yet another new tie to hang in the back of the closet and never use. But instead of a standard gift guide that runs down specific products, I thought it’d be neat to focus more on the one thing newer dads never have enough of: time.

The older we get, the faster that clock seems to move. So for Father’s Day, give dad some time to do what he wants to do, and as it may be quite awhile since he’s done it, dad may need a reminder. That’s where the actual gifts can come in!

For Father’s Day, Give Dad Time to… 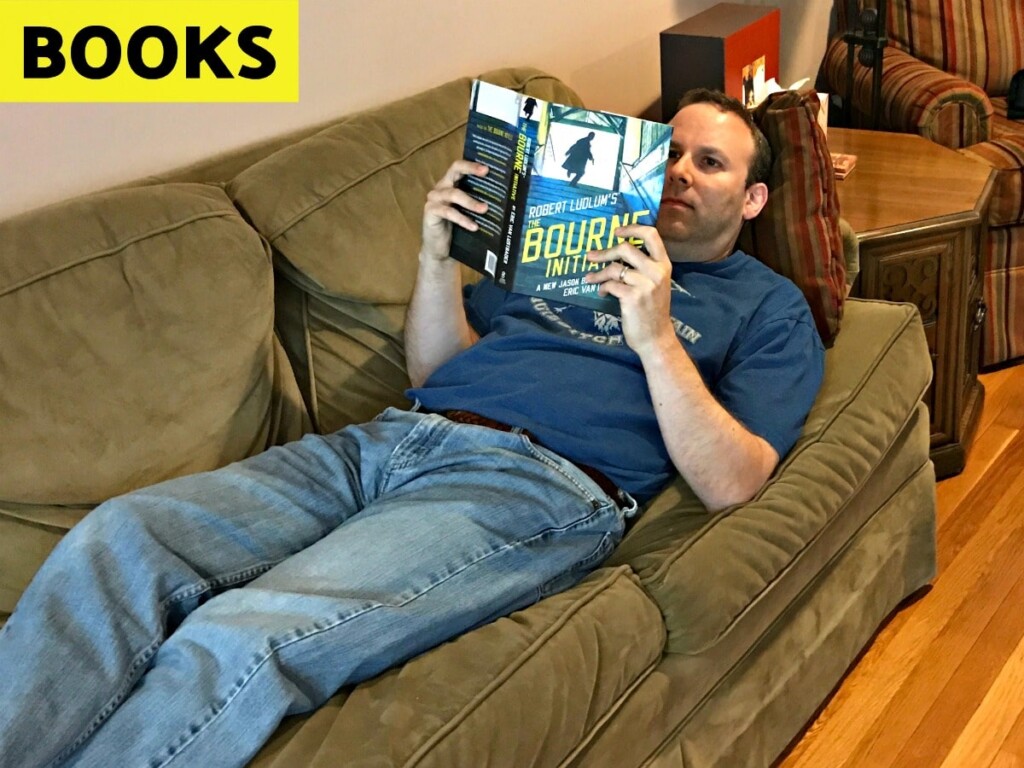 There is never enough time to read! Usually the only chance I seem to get to read is late at night. And by the time I slip under the covers and pull out a good book to read, I’m 30 seconds in before I pass out. I’d love a day completely dedicated to reading. What would dad like to read? Well, why not try something he may not be used to. Try a different genre. I usually read sci-fi or horror, so it’d be interesting to dive into something like say spy thrillers!

In fact, I just found out that the Jason Bourne series of movies is based on a book series by Robert Ludlum. Did you know there have been 13 Jason Bourne novels published already? I sure didn’t. I absolutely love the films with Matt Damon and find the story and character fascinating, so I’d kill (pun intended!) for a shot at reading the latest adventures of the super spy who’s completely forgotten his past.

Talk about perfect timing, too. Robert Ludlum’s The Bourne Initiative hits stores on June 13! The 14th book in the Jason Bourne series is written by Eric Van Lustbader and stars the rogue secret agent who lost his memory as he must save the United States from total annihilation.

Gen. Boris Karpov, head of the feared Russian FSB, is dead. But Karpov has reached out from the grave with an unstoppable cyber operation he conceived in the months before his murder, aimed at the heart of the United States—a way to steal the president’s nuclear launch codes. Who has taken over the operation? Karpov trusted only one man: Jason Bourne. But can Bourne be working against his own country? Gen. Arthur MacQuerrie, chief of the Dreadnaught Section of NSA and Morgana Broussard, head of the mysterious Meme, LLC, are convinced of Bourne’s treasonous act, and will do everything in their power to kill him. 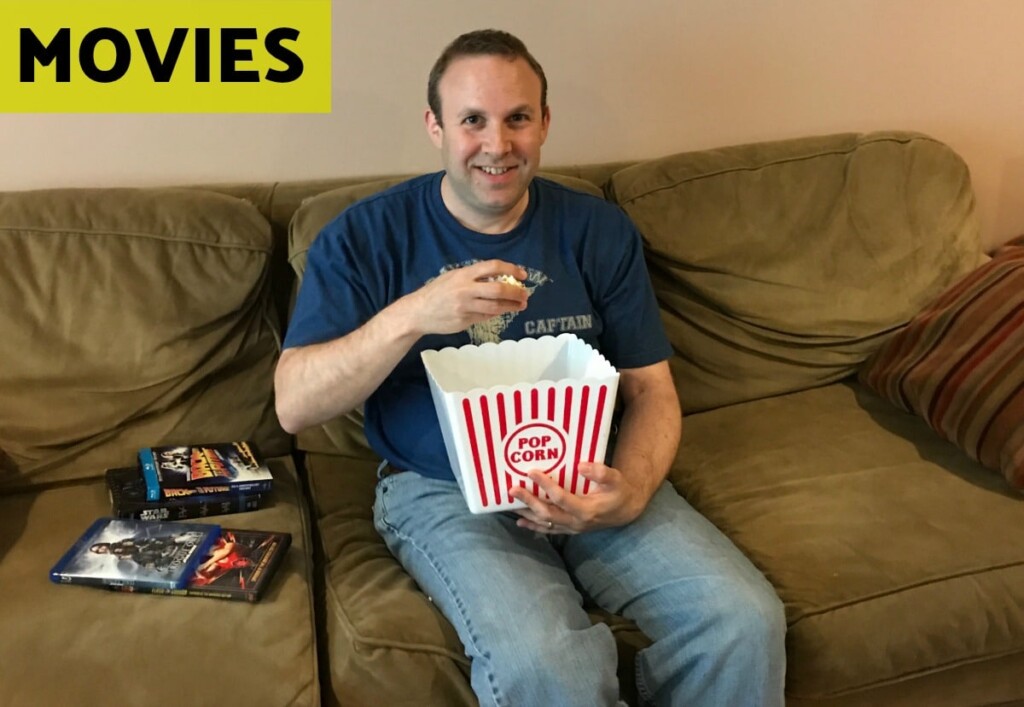 There are so many great classic films I can watch over and over and over again. From the original Star Wars Trilogy to Field of Dreams to more recent superhero flicks like Marvel’s The Avengers, I could lose a day in no time flat just rewatching some of my favorites. If you know dad’s favorites, go ahead and buy a fun set. There are all sorts of special collector’s editions that come in neat cases, feature all sorts of physical extras and the DVDs themselves have extra special features.

I love every Marvel movie and even though I have the individual DVDs, my wife’s bought me the big Marvel Cinematic Universe Phase 1 (and later on Phase 2) sets! They have a number of the DVDs in special cases, all sorts of really cool fake prop extras and it all comes in a super cool collector’s case. Phase 1 was in a big SHIELD briefcase with a real working Tessaract (a.k.a. the Cosmic Cube). Phase 2 came in a cool little set that featured the silver globe with a purple Infinity Stone, as seen in Guardians of the Galaxy.

You can also go for gift cards to various movie streaming sites (or simply your cable company’s On Demand service) so dear ol’ dad can catch up on the latest blockbusters. When you have young kids, it’s tough getting to the movie theater to see anything that isn’t animated. So let dad catch up on all the good, scary, action-packed, shoot-em-up films he never had a chance to see. 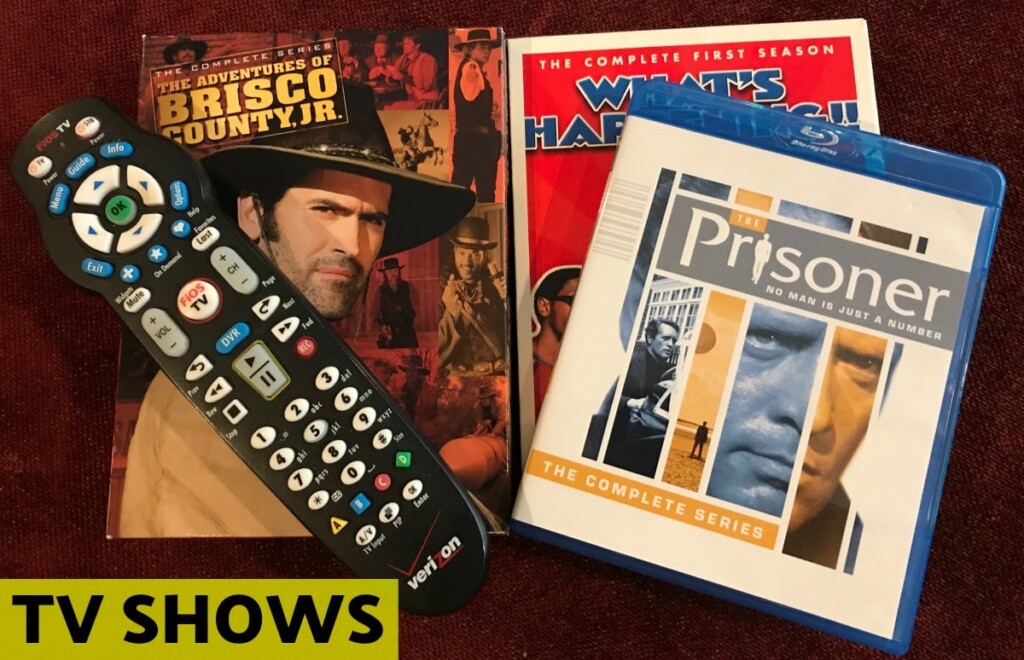 You’d think watching TV would be easier than getting out to the movies once you have kids. But you’d be wrong! With a babysitter, you can get out of the house and you’re halfway there. But if you’re home watching TV, there’s a 98.9% chance you won’t make it 10 minutes into an episode before you’re interrupted. If the kids are still awake, you have zero chance. If they’re sleeping, you have long enough until they wake up from a nightmare or from you screaming at your TV because you couldn’t believe who betrayed who.

So when dad has his day all to himself, let him play mega catch-up with his best friends: Mr. Couch and Mr. TV. Whether it’s the 23 unwatched episodes of CSI that are just sitting there patiently on your DVR or it’s a non-stop binge-fest of The League on Netflix, there’s no end to the television. Of course, you can also pick up loads of DVD sets of TV series like The Simpsons, Star Trek, The A-Team, LOST, you get the picture. 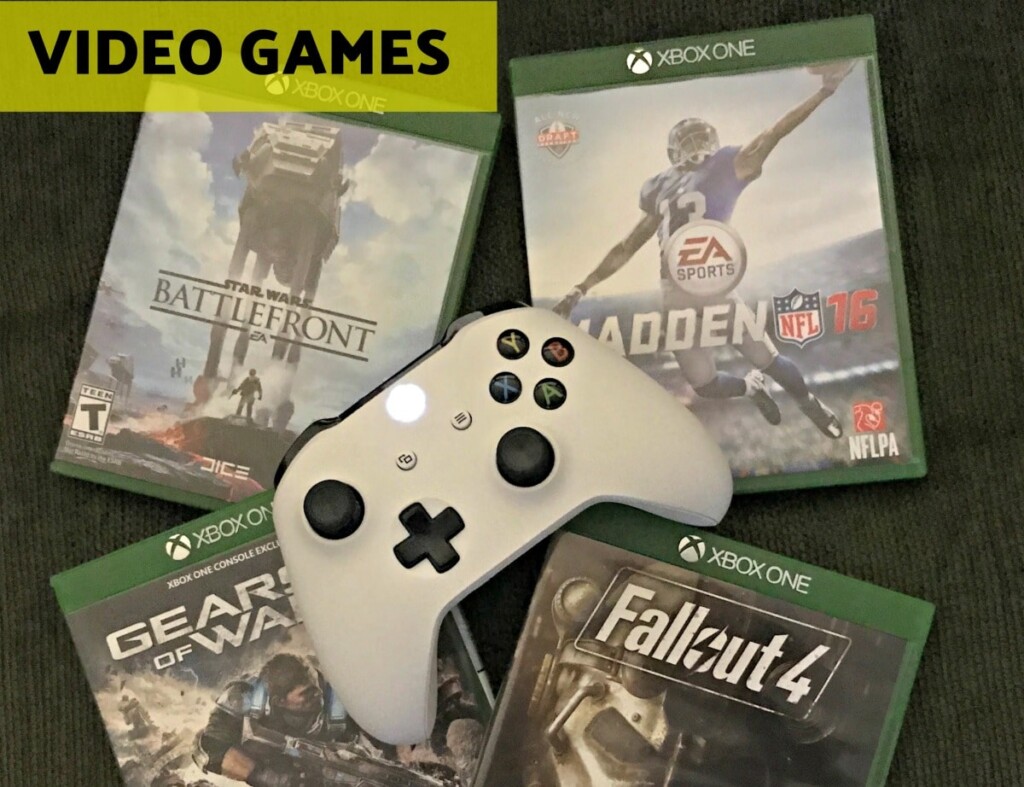 Forget all those cutesy kid video games that dad plays with the li’l guys. Yes it’s vital to start them young on the path of video game playing (I consider it a sacred fatherly duty!), but just because you’re teaching your kids to play those games, doesn’t mean dad can’t have fun himself! Chances are dad’s dying to hop on the Xbox One or PS4 to kill some aliens in Halo or survive the post-apocalyptic future of Fallout.

Besides snagging the latest best-sellers on whatever platform you own, there are loads of “plug and play” machines out there that literally scream retro. The latest Nintendo Classic is guaranteed to put a smile on any dad’s face. (Mom’s too!) Just plug it into your TV and you have instant access to dozens of classic NES games from your childhood like Tecmo Bowl or Punch-Out! 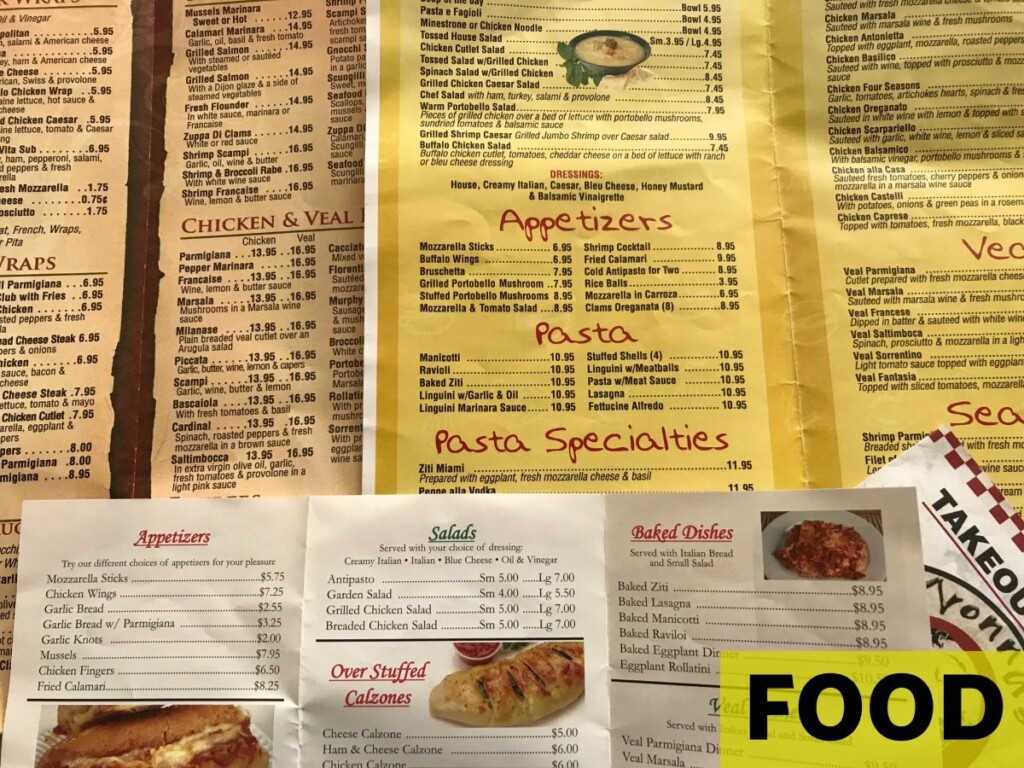 All year he’s been good, teaching the kids to eat their vegetables, cut down on the fried food, etc. Okay, okay. If your kids are anything like mine then chicken nuggets and mac and cheese are two of their favorite food groups! But as parents, we try to emulate eating healthy. Dad’s put up with countless Meatless Mondays. He’s eaten his body weight in salad. He’s even tried a cauliflower-crusted pizza to show how carbs don’t control him.

But let’s face it. Dad deserves a major cheat day at least once every year. Get him a dozen take-out menus from local restaurants and let him go whole hog. No judgement necessary. Buffalo wings. Egg rolls. Sliders. Chili dogs. Calzones. Calamari. Let dad go to town with the perfect “guy feast.” Just be sure to include a bottle of antacid for dessert.

Whatever you end up getting dad for Father’s Day, he’s no doubt bound to love it. (Except, again, a tie. Please can we stop those? Does anyone even still wear them?) Get dear ol’ dad at least one of the things mentioned in this post and he’s guaranteed to love it. In fact, chances are he may even start weeping. After all, the gift of time is the one gift that you just can’t return.

What unique gift would you give the man in your life for Father’s Day? 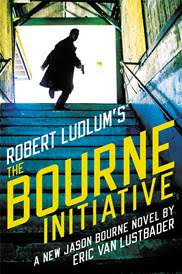 5 thoughts on “For Father’s Day, Give Dad Time to Do These 5 Things”