We finally had a free moment to sit down and watch Rio 2 together. The kids had seen the first one in theaters with their grandparents, and we all rented it months ago and enjoyed it.

As a Fox Home Entertainment Insider (sorry, I can’t share the secret handshake with you), I was sent the Blu-ray copy to watch and review. There’s a ton of specials and extras on the disc, but I’ll get to those in a bit. I’m not big on extras (they’re always cool but I never have the patience to sit through ’em all), so I just hit “Play” and we dove right into it.

Rio 2 picks up a while after the first film. Blu and Jewel are now a couple (not sure if they’re really married since that’s never mentioned and since bird marriages probably aren’t recognized by many countries yet), but they’ve got a great little family together. The colorful couple and their three kids embark on a family vacation like no other when they head out to the Amazon when more of their kind may have been discovered! I don’t want to give too much away, but the overall story becomes a fish out of water sort of tail, er, tale.

It’s the city-slicker in Blu being thrust into the natural wild element that his family seems to embrace so easily. Toss in danger in the guise of humans looking to destroy the Amazon, as well as the vengeance-seeking Nigel from the first film, and Blu certainly has more than his wings full.

The animation is as crisp and gorgeous as it was in the first film. The Amazon is nothing short of a color explosion and Rio 2 does a stellar job of painting that picture for you. There’s also a plethora of music, as you’d expect from a party plaza like Rio. And if you’re suffering from World Cup withdrawal now that it’s over for another four years, you’ll get a bit of a fix here both with the Rio location and some fancy footwork action.

The story itself is cute though the first 1/3 or so was a bit slow and cliche for me. Once the family hit the Amazon, though, my interest really grew and the last 30 minutes are action-packed and pretty darn fun. There’s a side story between the evil Nigel and an infatuated purple poisonous tree frog that didn’t really do it for me that much. I could’ve done without that storyline, but kids definitely will get into it.

I love the rhythm and score throughout, but wasn’t wowed by all the actual musical numbers. One or two I could’ve done with, but there’s quite a few songs that, to me, just slow things down a bit. They’re not bad songs, they just didn’t really do it for me. But my kids seemed pretty mesmerized throughout so no real issues there.

Overall, I’d definitely give Rio 2 a thumbs up and say if you liked the first one, you’ll enjoy this sequel, especially if you take a look at the extras.

Sure there’s a number of standard extras like a deleted scene, trailers and stills, but there’s a ton more that’s really entertaining. We only watched a few so far, but plan on going through it all. The making of the music is truly fascinating as you see some of the key musicians (some using only their bodies as instruments!) put together the energetic tunes throughout the film. I joined in and can now successfully make a popping noise with just mouth and the palm of my hand. There’s also real basics like stomping and clapping that your kids will no doubt join in full force

To keep the party going even longer, you can also get a limited-edition Rio 2 Lunchbox available only at Best Buy. (Note: The lunchbox is sold separately.) It’s a great way to kick off the Back to School Season!

I was one of the lucky few FHEInsiders to score a copy myself. I can’t wait to see the look on my co-workers’ face when I break this bad boy out at the office. I may have to fight Ryan for it, though.

Before seeing Rio 2, I had heard mixed reviews.  So I really wasn’t expecting much. Especially since as a movie rule, sequels are generally average at best. And animated sequels are almost always worse. But I’m happy to say I really did like watching this one with the family and hope they follow it up with a third film in the series! 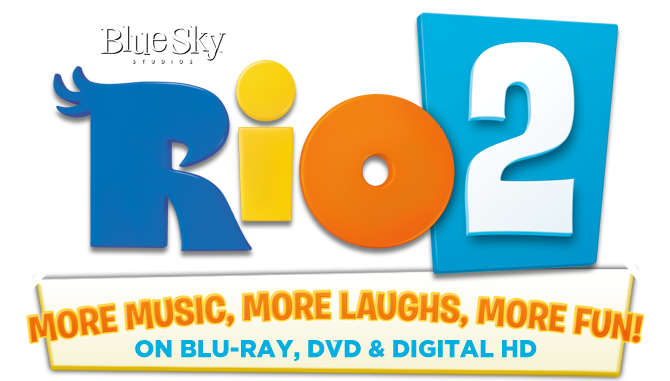