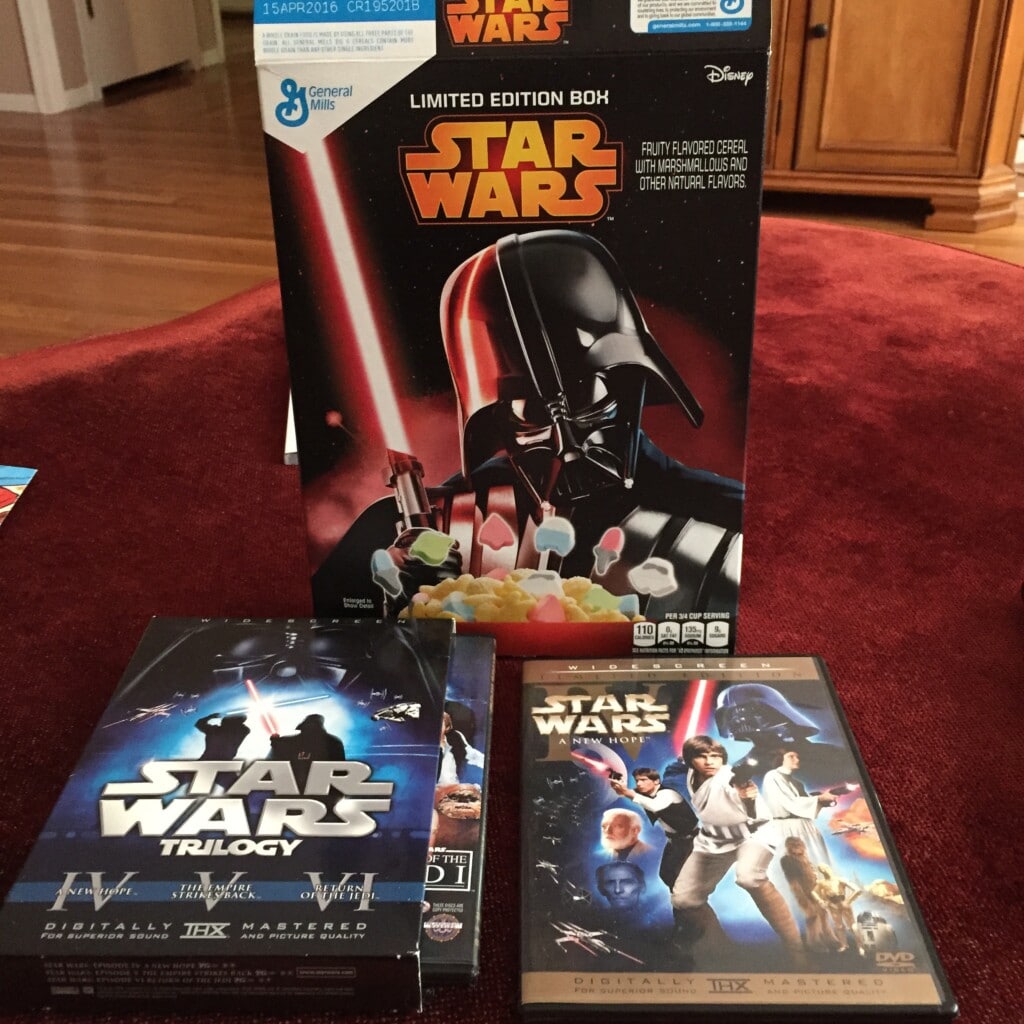 Two things summed up a big chunk of my childhood: Star Wars and cereal.

I have crazy awesome memories of sitting in front of the TV every Saturday morning watching cartoons and stuffing my face with bowls of cereal. I also have a real detailed recollection of a big argument with my friend Chris in Elementary School.

Return of the Jedi was coming out soon and he had read the storybook adaptation (which always comes out right before the movie). Needless to say we had a huge debate over whether or not Darth Vader was really Luke Skywalker’s father. Don’t worry, I won’t spoil that one for the four of you who haven’t seen it yet.

I remember leaving the movie theater after Empire Strikes Back with my family. It’s easily my favorite of the Original Trilogy and I’m man enough to admit that I was in tears at the end. I just looked at my mom and said, “That can’t be the end! The good guys didn’t win!” I’m pretty sure it scarred me for life.

And of course I still recall catching Return of the Jedi at the Suffern Lafayette theater in 1983. The theater’s still there in fact. I loved the opening scene to ROTJ and still get goosebumps at the ending.

I know I saw the original Star Wars in theaters, though I was only five years old at the time, so I don’t remember my immediate response, other than that it became my obsession as a kid.

This Father’s Day I decided to start up a new tradition: I popped in a Star Wars DVD to watch with my boys. I’m talking about the original, theatrical release version. No special editions. No Greedo firing first. Just the original film as I saw it when I was a little punk.

I couldn’t think of a better snack too than cereal. Not just any cereal mind you, but Star Wars Cereal! General Mills’ new Star Wars Cereal comes in two different limited-edition boxes: Yoda or Darth Vader. Yep, you get to choose which side of The Force your breakfast is on! 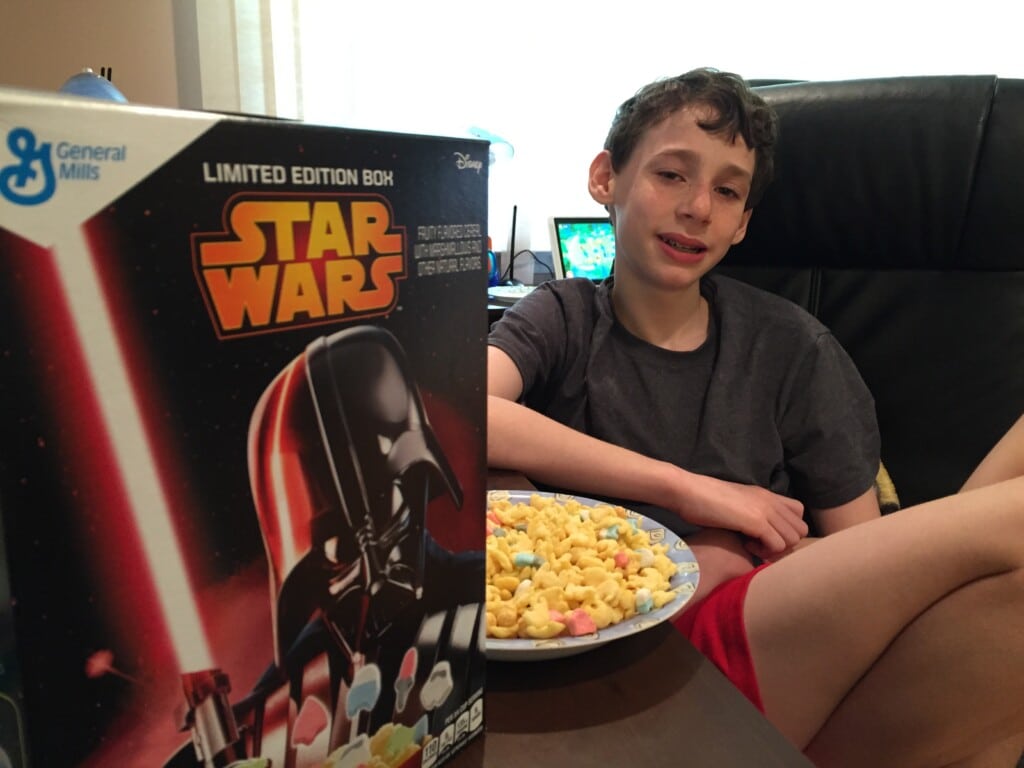 Jason actually munched away on it this morning and loved it. He’s real picky with his cereal too, especially ones that contain marshmallows. But he gave it the big thumbs up! 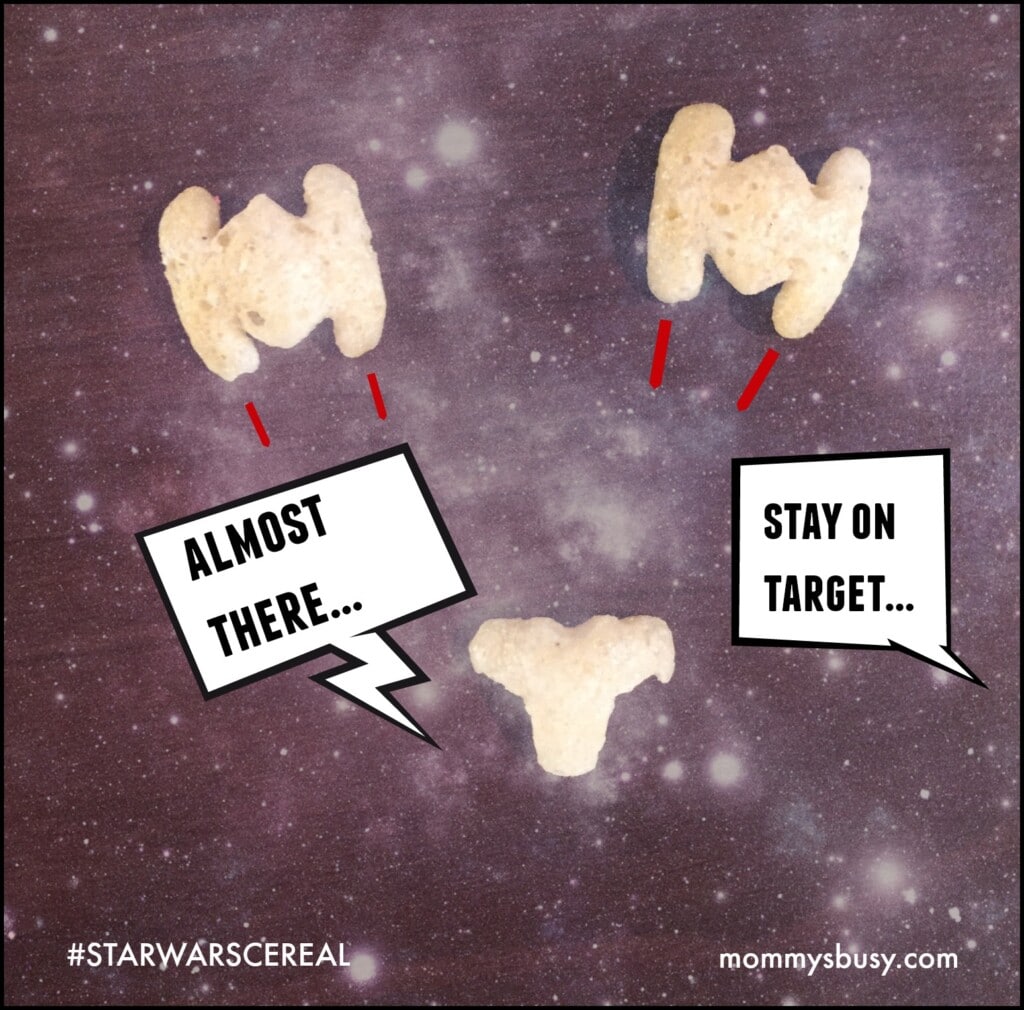 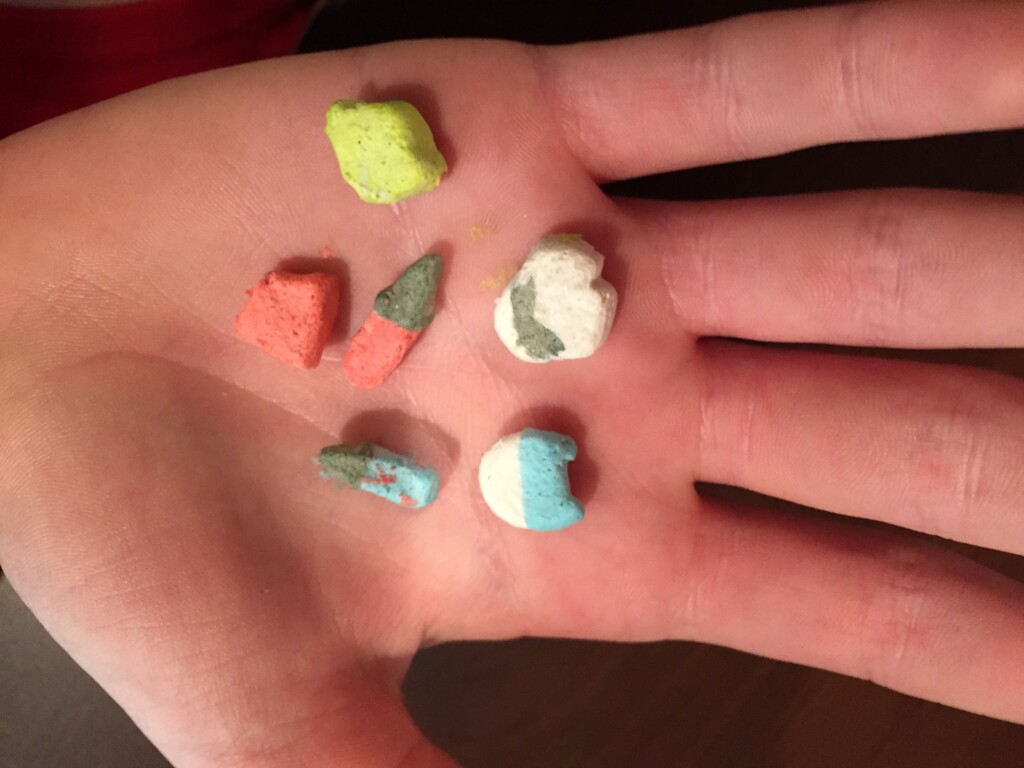 As for the marshmallows, there are six fun shapes:

Each of the boxes have puzzles and games on the back too. Yoda features a variety of Star Wars trivia questions, while the Darth Vader box includes a game you can play with your friends. From now through June 2016, there’ll be six different characters in total, three for the Light Side of the Force and three for the Dark Side. 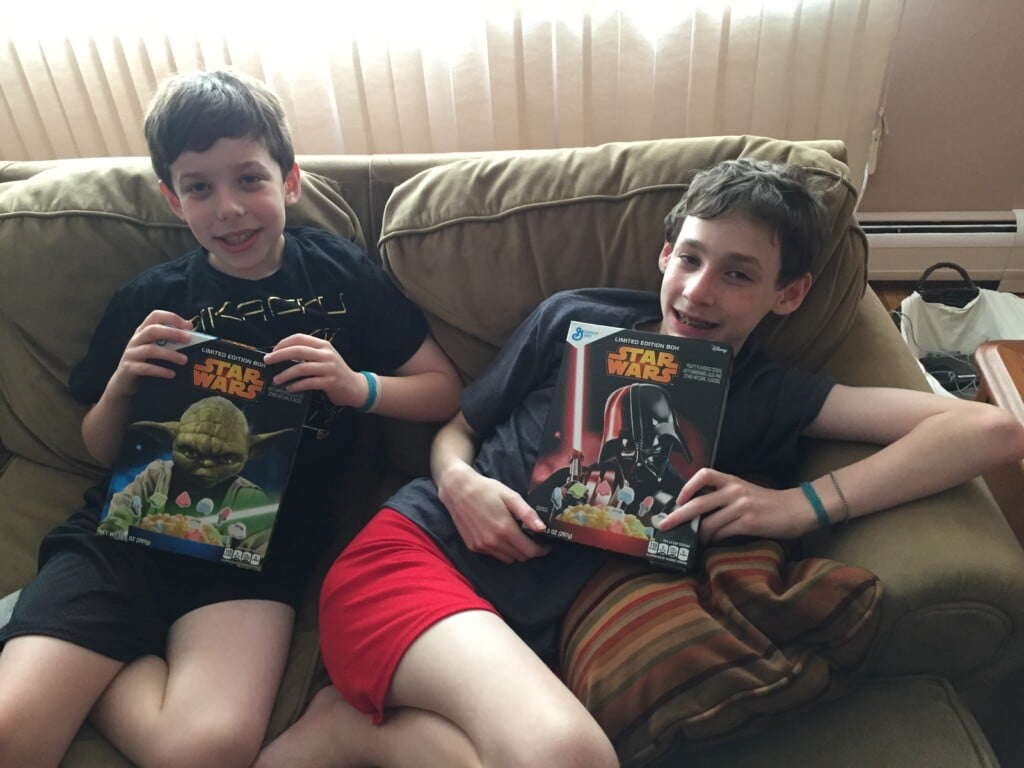 While I’d clearly choose the Light Side every time, I decided to dive into the Darth Vader box while watching Star Wars with Jason and Ryan. I gotta admit, it’s pretty darn tasty! And I’m not one to really like sweet marshmallow cereals. I probably devoured half the box while watching Luke and Company take on the Death Star. 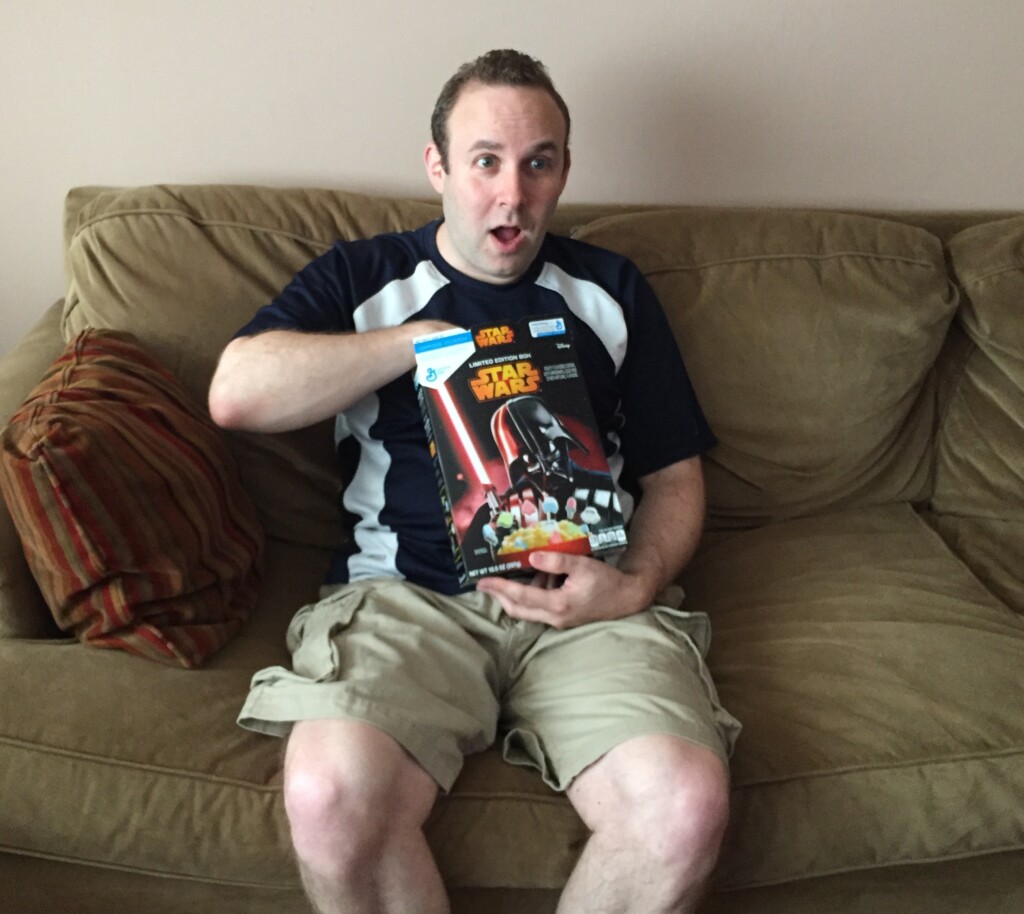 You can grab Star Wars Cereal at your local grocery store now. Hurry, though, because Vader and Yoda are only available for a few months before they switch boxes to a different pair of characters.

To give you a leg up on those Bounty Hunters seeking out the best bargains, you can download a $1 Off Coupon! You can also view more info and wacky fun on the Star Wars Cereal Tumblr page.

Which side of The Force are you on?

7 thoughts on “When it Comes to Breakfast, Which Side of The Force are You On?”